One of the first Hamilton wrist watches I bought was an Endicott.  It's also one of the first models that I put on the bog when I started this in 2012 (over six years ago!).  The Endicott is one of my top favorite models and I always notice them when they're for sale and take a run at them when they are priced right.

The Endicott was made for several years, starting in 1938 and going through 1948.  It has five different dial options and I thought I'd do a post on what I consider to be the rarest dial pattern for the model... the first generation applied gold numeral dial.

In 1938 and 1939 the Endicott had black enamel numeral dial or an AGN dial. The AGN version has black rectangles at the 5 minute marks.  It was introduced in October of 1938.

In 1939 the same AGN pattern was offered along with the black numeral dial and a luminous pattern was also introduced.

In 1940 the black zone (and gilt) dial was introduced and if you look closely the AGN dial changed slightly to having black triangles at the 5 minute marks.  So by this time there were four dial options to choose from.

I believe the original AGN pattern with the black rectangles is the least common.  In fact, I've only ever seen 3 or 4 since I started collecting.  Hamilton records indicate there were 5 Coral Endicotts plus 1 solid gold Coral Endicott produced - so really there are six dial patterns out there but good luck finding a Coral one!

Over the years I've sold four of the Endicotts to a fellow collector who appreciates the model as much as me.  The only one he didn't have is the original AGN dial.  I happened to see one on eBay recently and he purchased it, then he sent it to me to restore for him.

As received it's not too bad.  It's a little dirty but nothing too concerning. 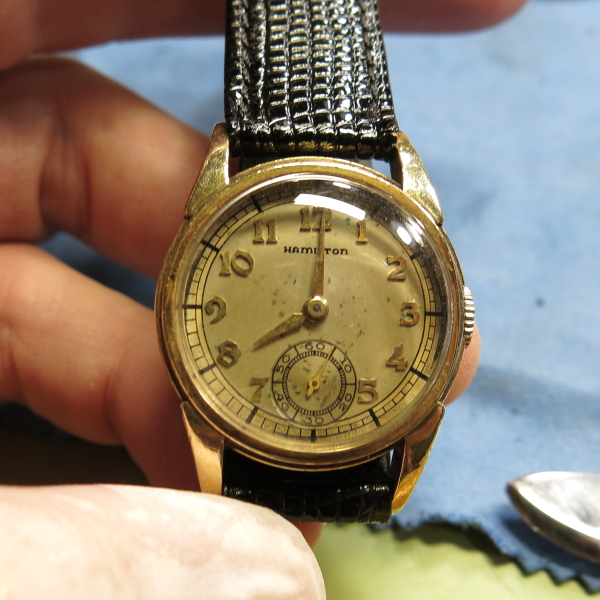 One of the ways to tell a good Endicott from a great Endicott is to look at the case back.  A good one will show some wear to the lip of the back where a case knife can open the watch.  A great Endicott will not show wear and this is a great Endicott.  It will clean up very nicely. 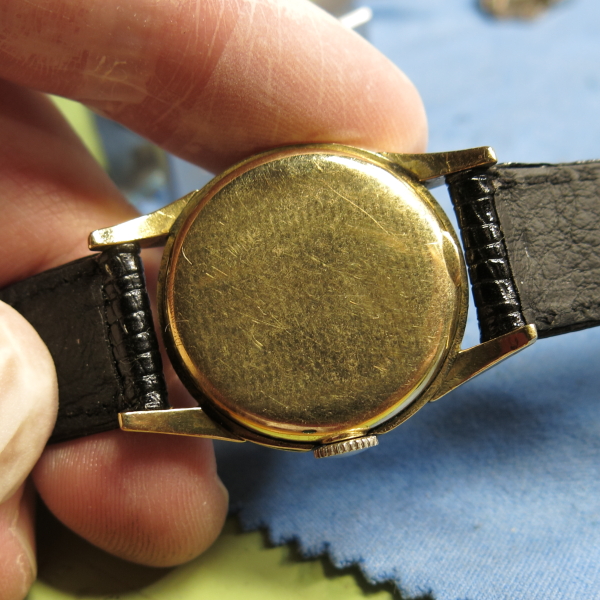 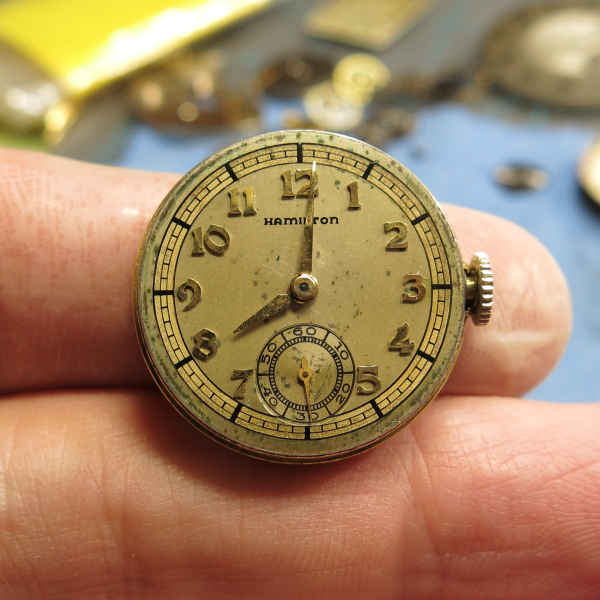 The only thing not original on this watch is the crown, it's white in color and would be great for a white gold filled model but the Endicott should have a yellow crown. 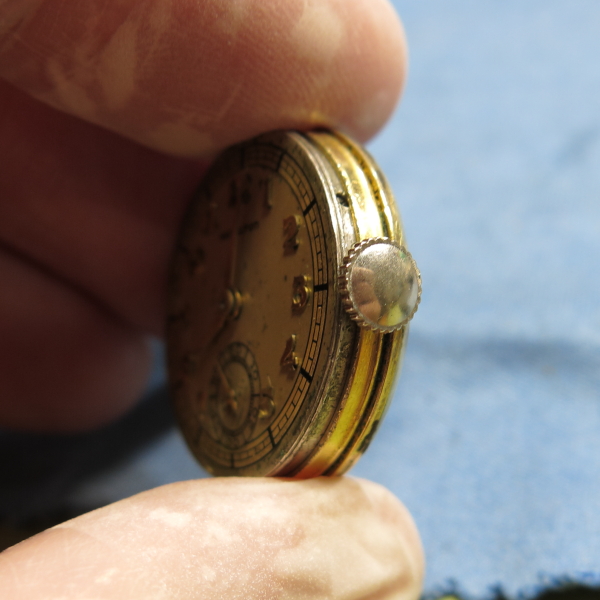 This is an early 987A, just as it should be for an early Endicott.  At this point in time Hamilton still included recesses for case screws to secure the movement in a three-piece case.  Some of the early 1930's models with three-piece cases were still being made by the late 1930s. 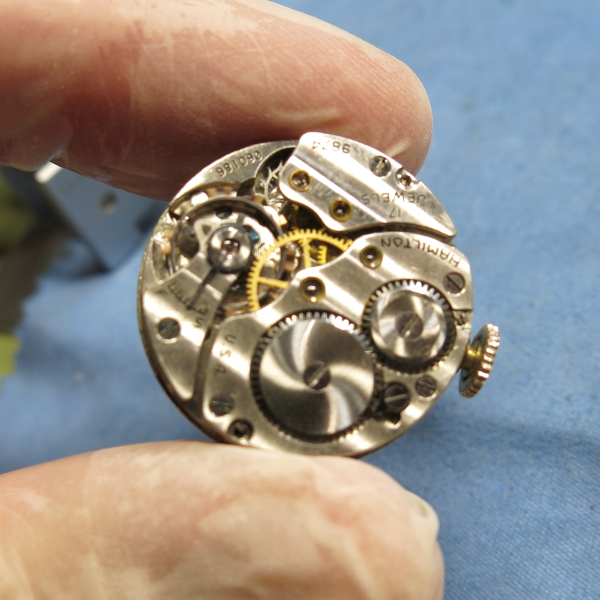 The back of the dial has no marks whatsoever, another sign that it's original. 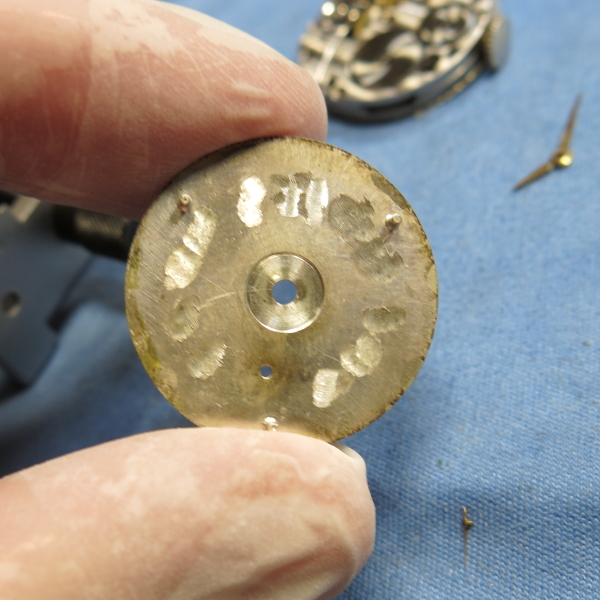 The mainspring inside the barrel is a typical blue steel spring.  I'd wager that it's "set" and has lost most of it's energy by now. 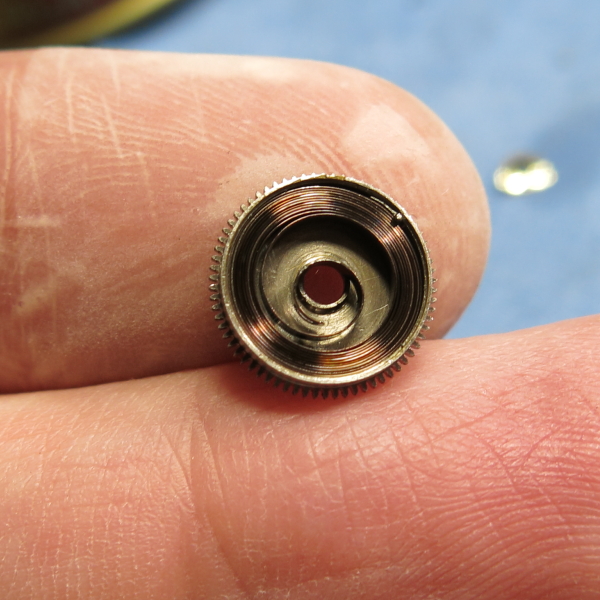 Yup - the spring expands to about the size of a quarter.  This watch would probably run about 12-16 hours on a full wind, if that. 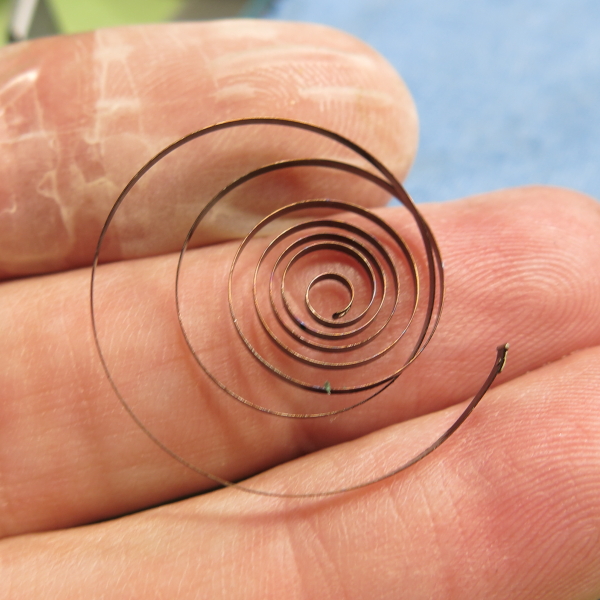 I'll put in a nice white alloy Dynavar spring - that will power this watch for upwards of 40 hours. 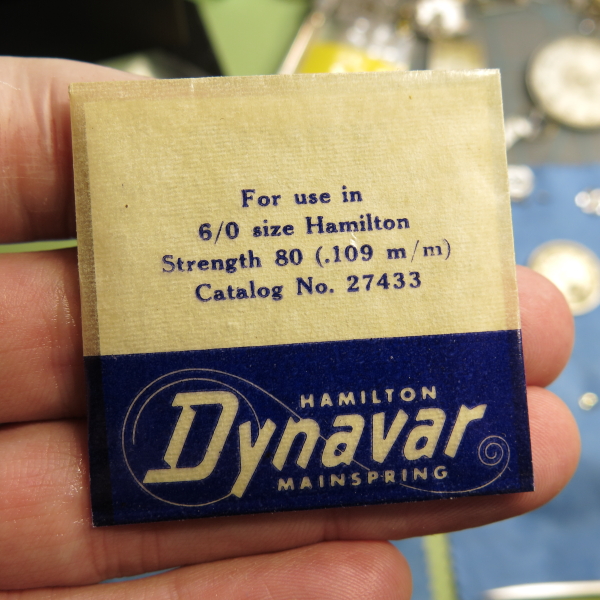 The now clean and reassembled movement is ticking away with good motion. 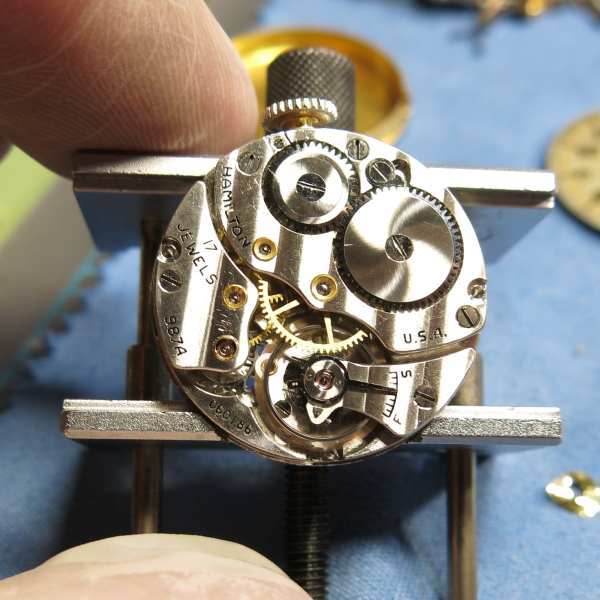 Well... it's not too bad.  The timing is good, the amplitude is great, and the beat error is under 4ms but it's pretty close to 4.0.  The closer to zero the better so now I have to decide if I feel lucky enough to risk goofing up an otherwise good balance by removing it from the balance cock and trying to reduce the beat error.   Hmmm..... 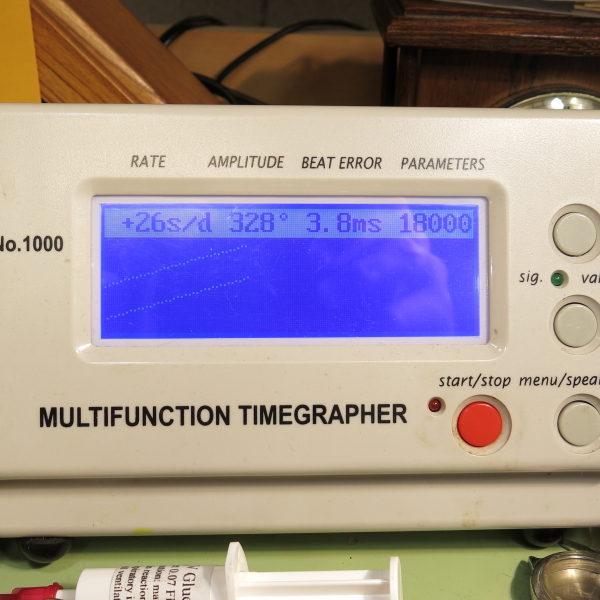 I decided to go for it since I have a spare balance if something bad happens.  The beat error is caused by the balance not being centered on the pallet fork.  To correct it you have to remove the balance and rotate the hair spring how ever far is needed to center the balance.  Normally it's just a few degrees one side or the other.  It's not always easy to see which way it needs to go so you have a 50% chance of being right.

As you can see below, on my first attempt I chose poorly - and the beat error increased. Now I have to do it all again and rotate the spring the other direction and then a little more. 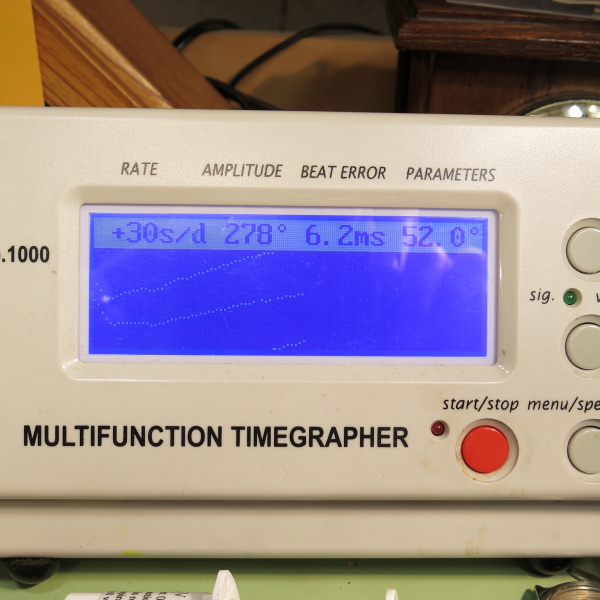 There... nailed it.  A couple of tweaks to the regulator bring all the numbers into more than acceptable  levels. 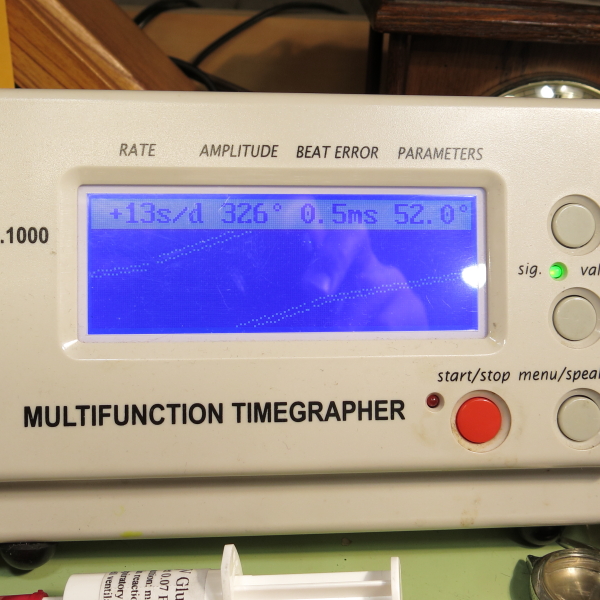 I realized I had another Endicott project watch lurking on my bench (I told you I found them hard to resist).  In the shot below you can see the two different AGN patterns, the placement of the numbers and the differing lengths of the hands.  Only the cases are the same. 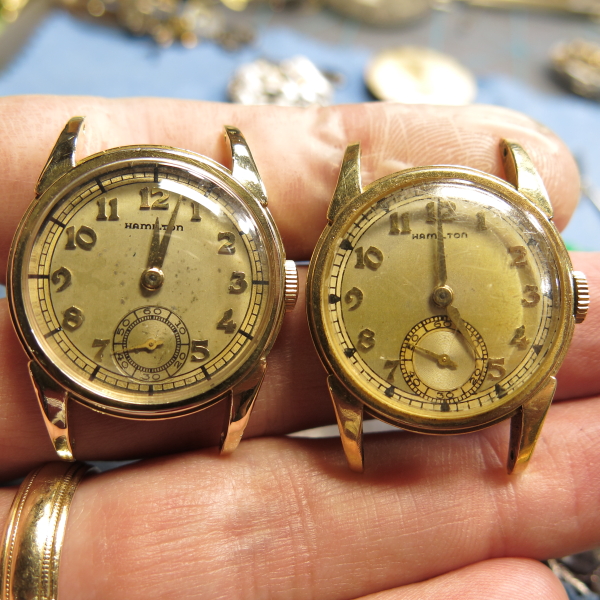 My project watch turned out pretty good I think.  The dial is almost 80 years old so you should expect a little aging, no?   I think it looks excellent and no my friend will have a complete set of Hamilton Endicotts.  We've been looking for this one for at least a couple of years, I think.  It is not an easy watch to find. 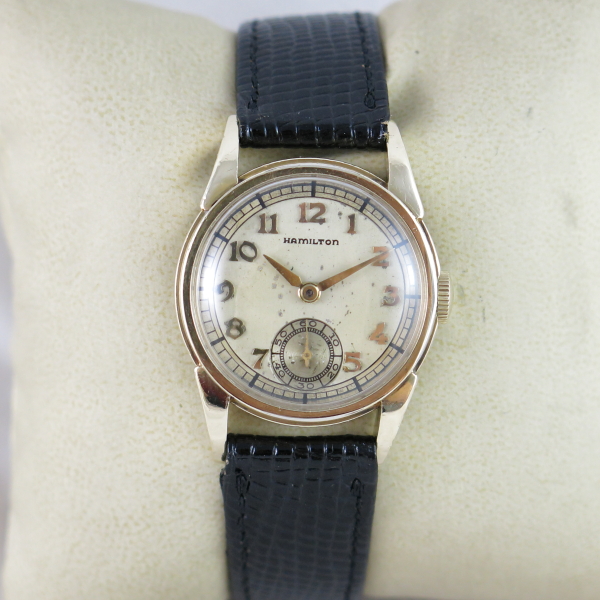