Asymmetric models are among the most sought after and popular watches in Hamilton's 1950's and '60's era.  There are Electric, manual wind and automatic wind models with asymmetric cases.  Even the Thin-o-matic line has a couple... one of them is the T-403.  This model was produced from 1960 through 1963. 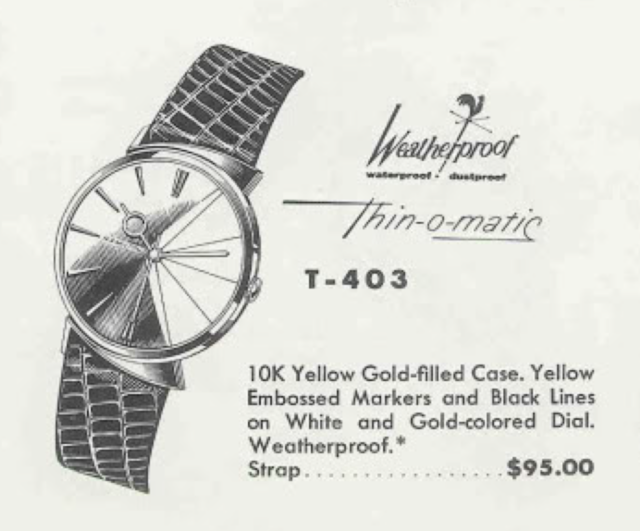 The T-403 reminds me of a shark, probably because of the swooping shape of the lugs.  It also has a "War of the Worlds" look to it, if you look at it from the side. 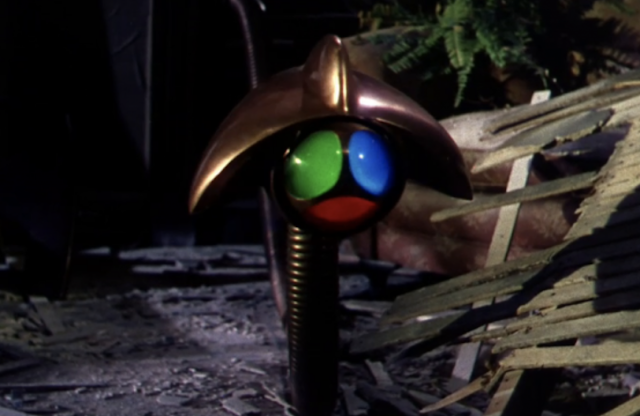 It definitely has very unique styling that you'll only find in this era.  In 1962 the model was offered with either a yellow or white gold filled case.  Oddly, the white gold filled model didn't get white (silver) markers and hands - it had yellow hands.  The yellow version has yellow markers but black hands... go figure.

Its also interesting to note that the 1962 version was less expensive than the model when it was original introduced.  You don't see that very often.

My T-403 project watch came to me courtesy of a fellow collector.  He has some fantastic examples and often shares some rare pieces with me - which is great because that means I don't have to find them in the wild.

As received, you can see it's the white version so it's either from 1962 or 1963.  The crown is not original and some moisture has gotten inside but otherwise it appears to be in good condition. 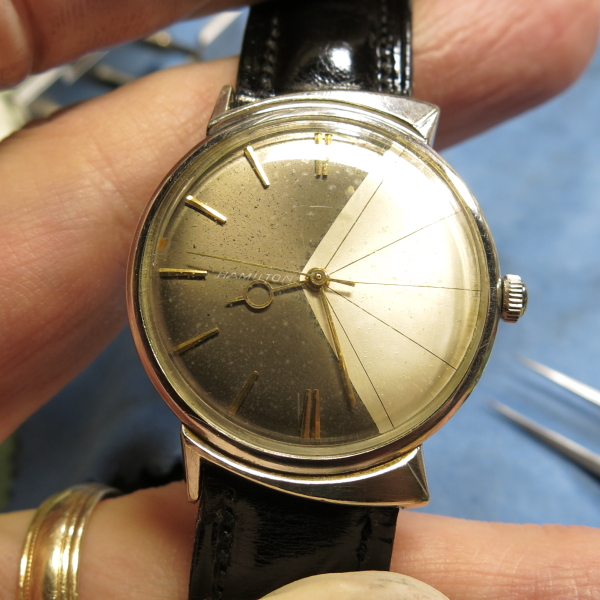 The back is flat and since the watch does not say Automatic or Thin-o-matic on the dial, you wouldn't really know if this is a manual wind watch or an automatic.  The overall shape of the back is a classic Thin-o-matic contour. 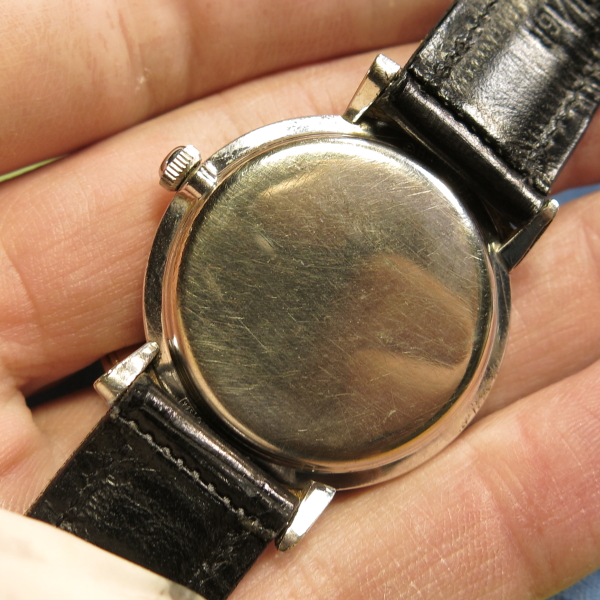 I use a special tool to separate the two-piece stem and pull the crown out.  Do you think a little moisture has gotten inside?  I would say, yes, most definitely.  I hope the rest isn't a mess. 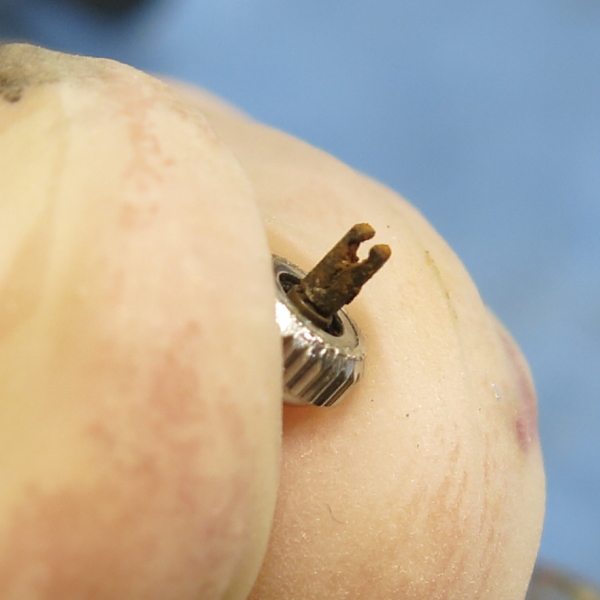 If you're curious what tool I use, it's not very complicated.  It's just a tiny pry bar. 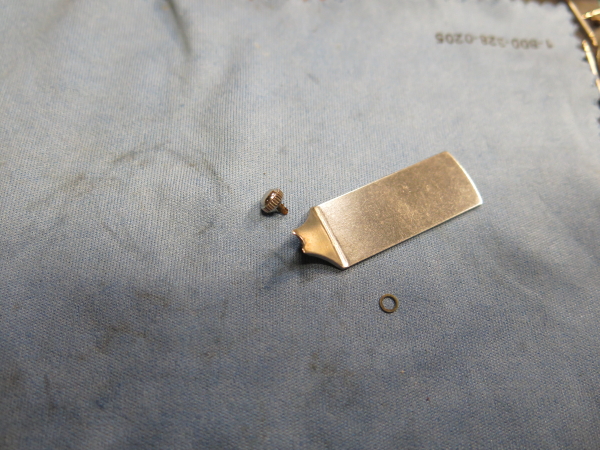 Next I'll pull the crystal with my crystal lifter.  Notice the evidence of water droplets inside the crystal.  It's also a bit beat up and my friend included a new crystal, so this will be replaced. 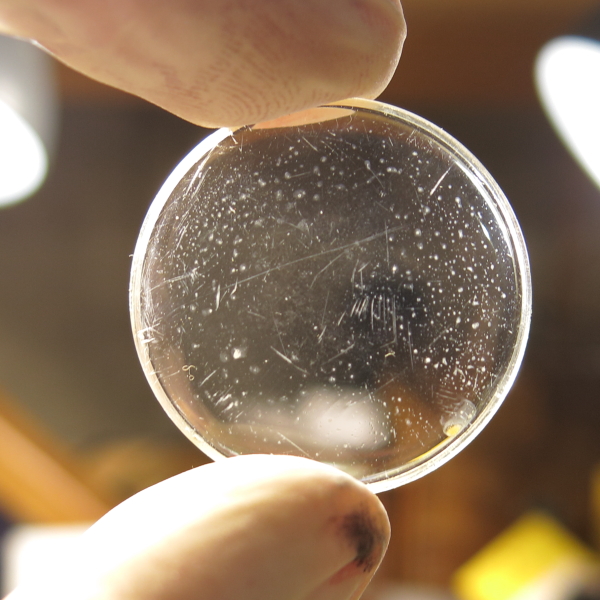 Phew!  The rest of the movement looks good.  Only the stem shows some rust, the rest is fine.  Of course, once I pull the dial and hands, I might find more rust on the other side. 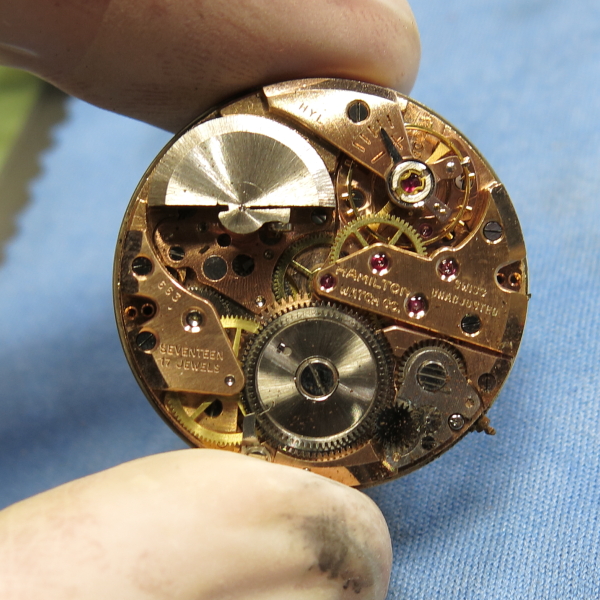 This watch is long overdue for a cleaning - look at all the funk inside the case! 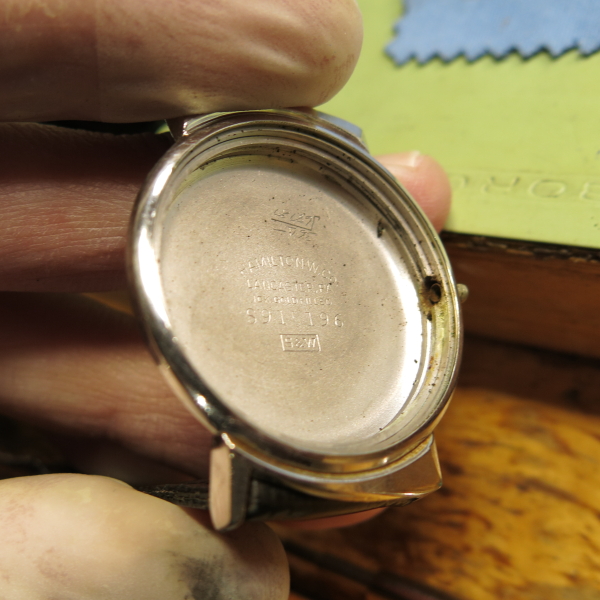 It's funny how there's a dramatic line of crud on the dial right where the white and dark sections meet.  The finish on this dial is probably compromised by the moisture so I will not try to clean it.  It's also interesting to note that there are only hour makers from 6 to 12... really funky design, don't you think? 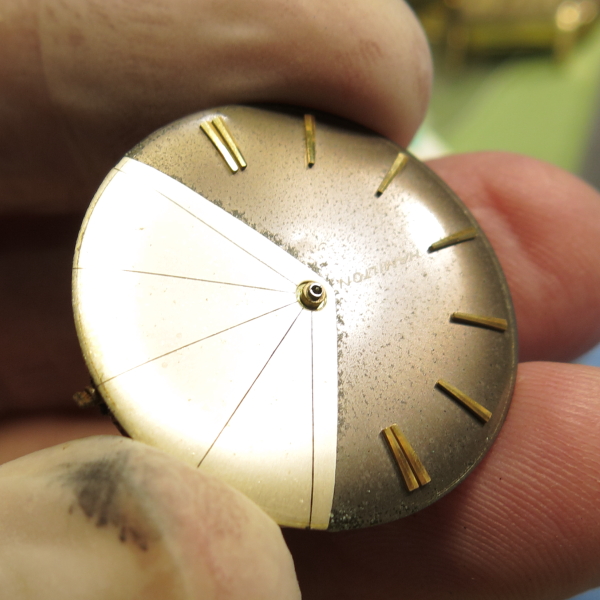 It looks like the rust was limited to just the stem.  That's very fortunate. 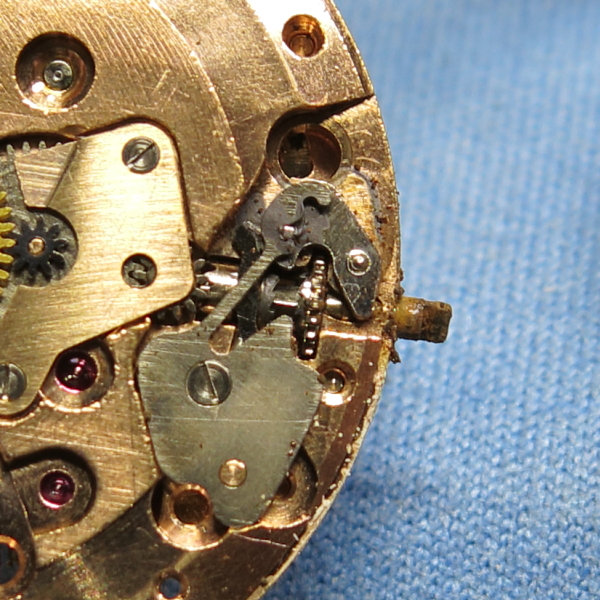 While all the parts are in the cleaner, I'll get the new crystal ready for installation.  I suspect a 31.1 PHD style crystal would be a suitable alternate. 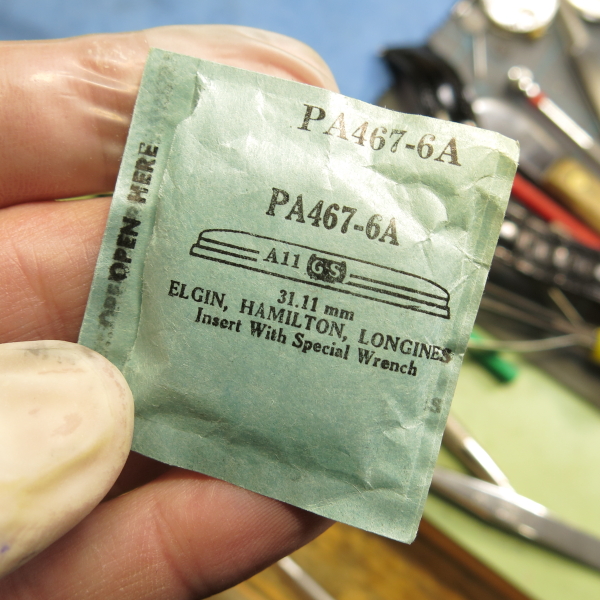 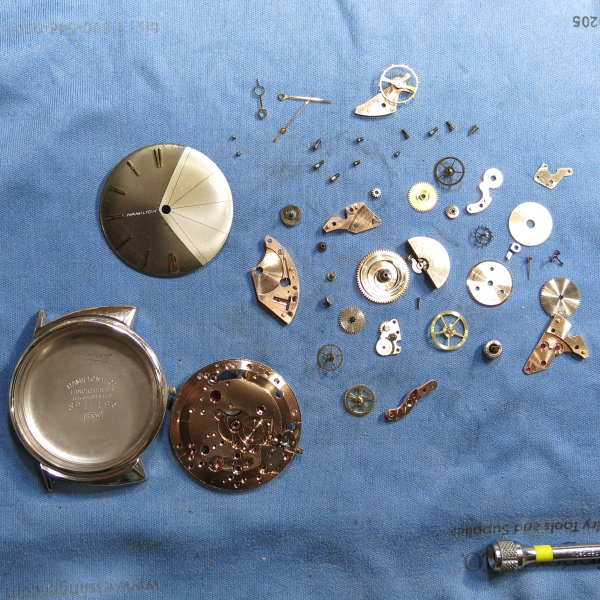 I think I see how some moisture gets into the case - there's a hole in the joint between the stem tube and the case. 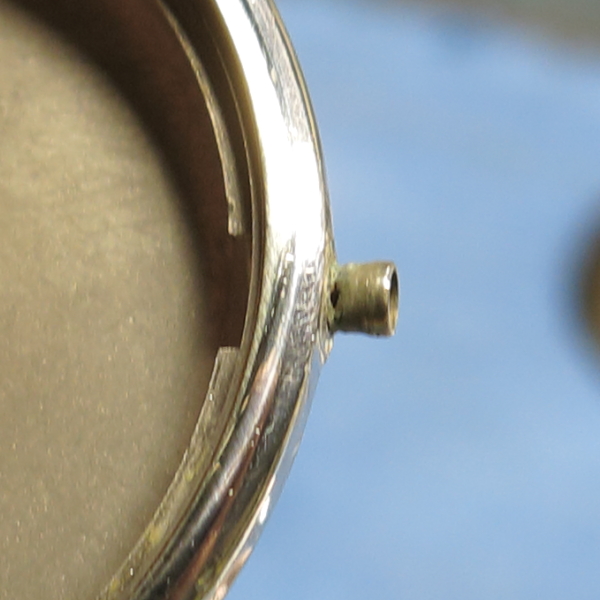 Micro-rotor movements can be a pain to reassemble and they definitely aren't good projects for a novice.  Eventually all of the parts go back on and the watch is ticking away on the timer. 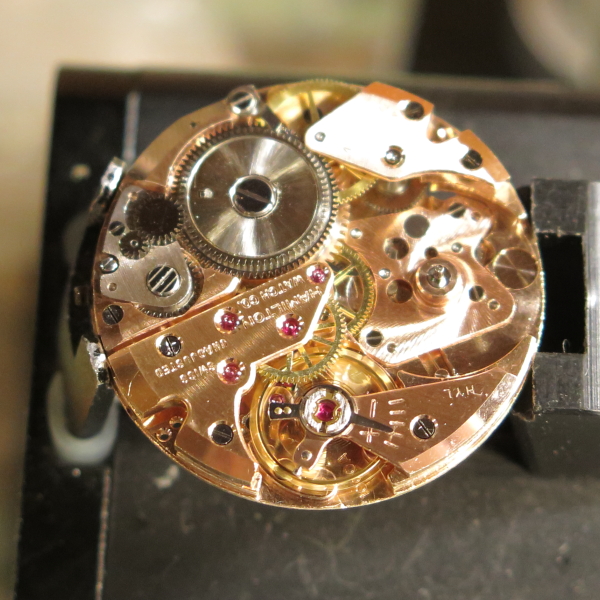 It's running a bit fast but you can see the regulator (above) is set toward the fast side.  I will move it back to the center. 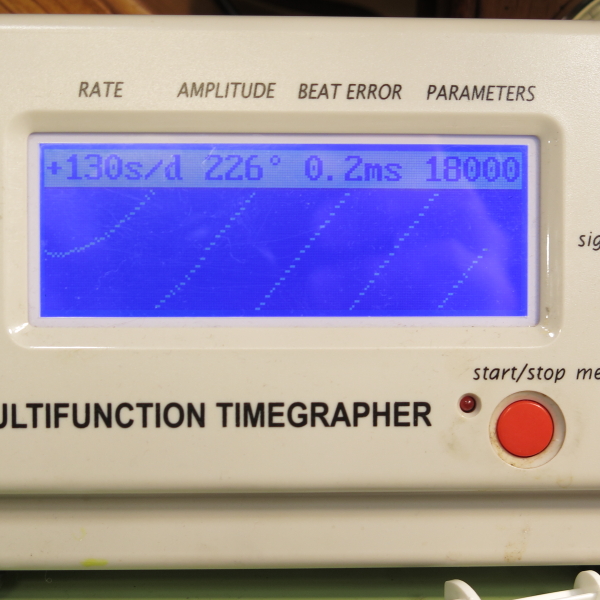 There... not too shabby.  I might tweak it up a little more, to say, 15 seconds fast per day.  That way when it settles down it will be spot-on. 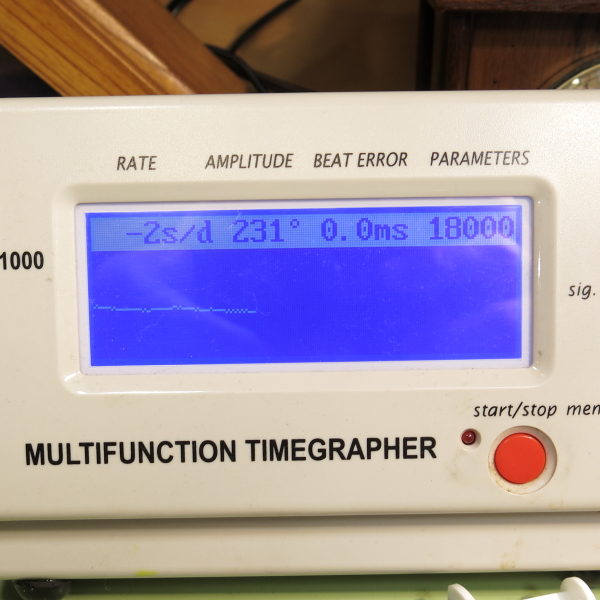 WOW!  What a trip to the spa makes!  It's hard to believe that the watch below is the same watch I started with.  The dial is still a little dirty but some of the funk is gone.  The hands are clean and the crystal is spotless and  that helps a lot.  This is an uncommon watch and I'm glad I've finally gotten to tackle one. 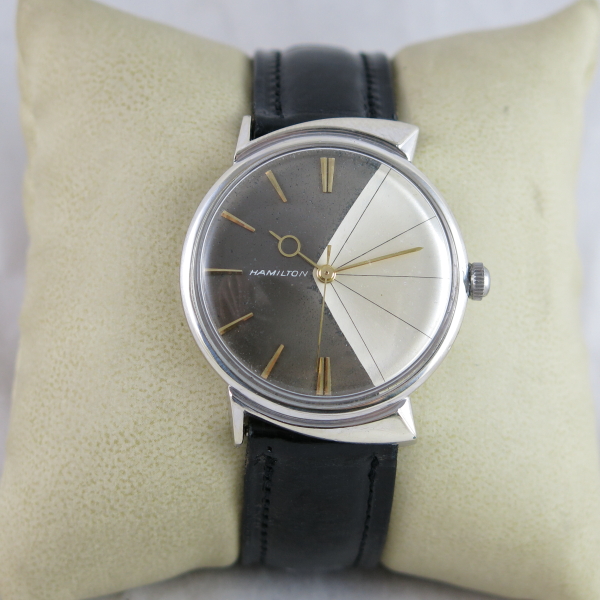