One of the most frequent questions I get is, "How much is my watch worth?".  That's really a difficult question to answer, there are a lot of factors;
Based on those questions most watches can be assigned a value.  The easiest way is to look on eBay for "sold" listings, if it's a fairly common model.

To me, a really significant question is "who's watch was it?".  Tomorrow is Father's Day and I think when a watch was dad's or grandpa's the watch ought to be priceless.  I would say at least half the time that doesn't seem to matter to the owner though... which I think is really sad.  It just goes to demonstrate how important a responsibility fathers' have to be good dads and grandpas.

Anyway, one type of watch that I think is very hard to put a price on is an ultra-rare model where there are very few examples to base a comparison on.  Take, for example, the 1961 Tuxedo II.  It was produced for three years but it's very hard to find in the wild. 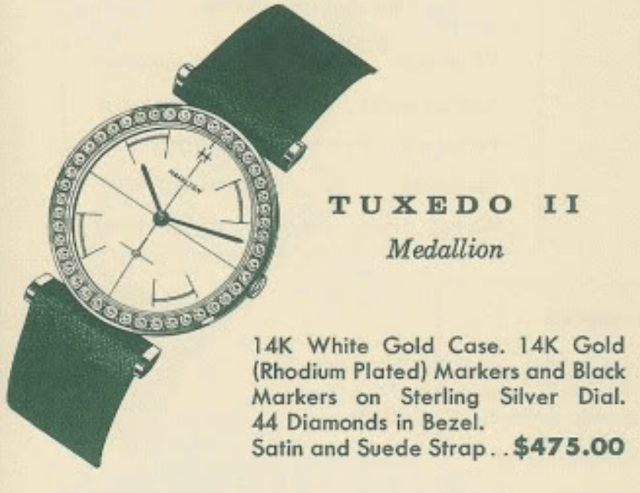 It came in a solid 14K white gold case but the really unique feature was 44 diamonds surrounding the bezel.

Inside the case is a 22 jewel 770 movement - the flagship movement for Hamilton models made in Lancaster PA.

You have to be REALLY careful with Hamilton models with diamonds.  Many, arguably most, that you will see are recased Hamilton movements with aftermarket dials.  On any given day you can find a dozen jeweler-cased watches for sale on eBay, usually with steep prices.  Always try to see the inside of the case back.  If it doesn't say Hamilton Watch Co. Lancaster PA, it's not a legitimate model.  It might still be a great watch, but assume the price should be the sum of the materials involved and don't overpay.

My project watch was a lucky find.  I have never seen another.  It arrived in really nice condition.  The only remark I would make is the second hand is unusual - it has an arrow tip and is likely a replacement.  On the other hand, Hamilton was known to use what was available when times where hectic, like preparing for the Christmas or graduation seasons. 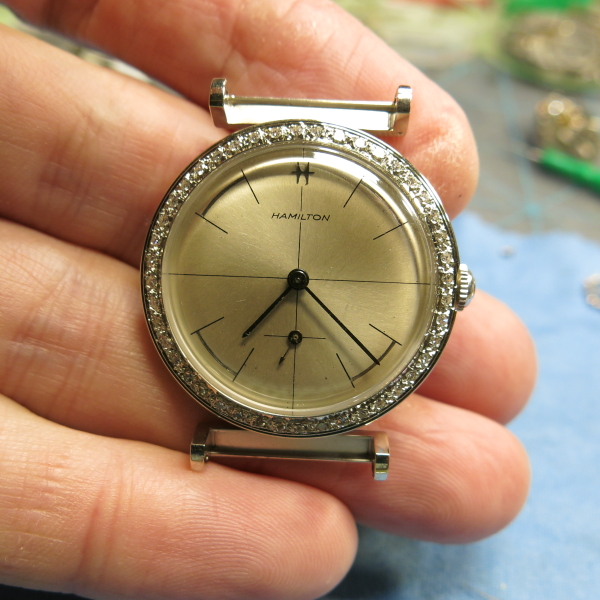 The back of the case is unengraved.  It has some minor scratches but nothing remarkable.  This case reminds me of the 1962 Whitford but without the diamonds. 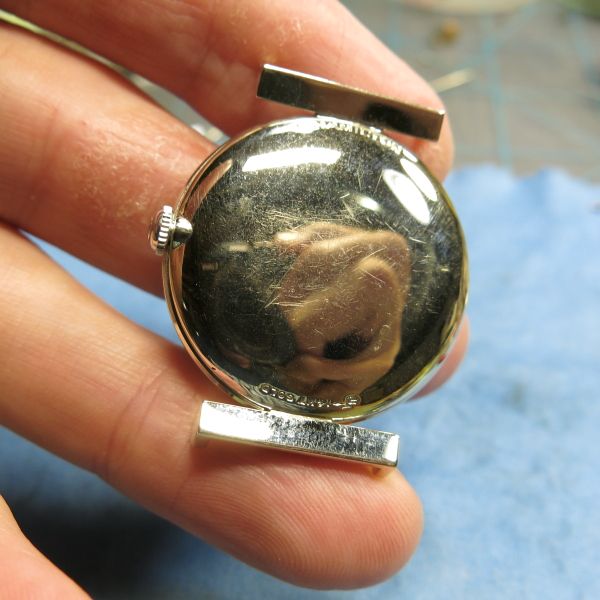 With the bezel carefully removed, I can get a better look at the dial.  The H at the 12 position is solid gold but rhodium plated to appear silver in color.  The hands and hour marks are black and the curved arcs between the 1 and 2, etc. looks to be silver in color.  It's a little hard to tell though. 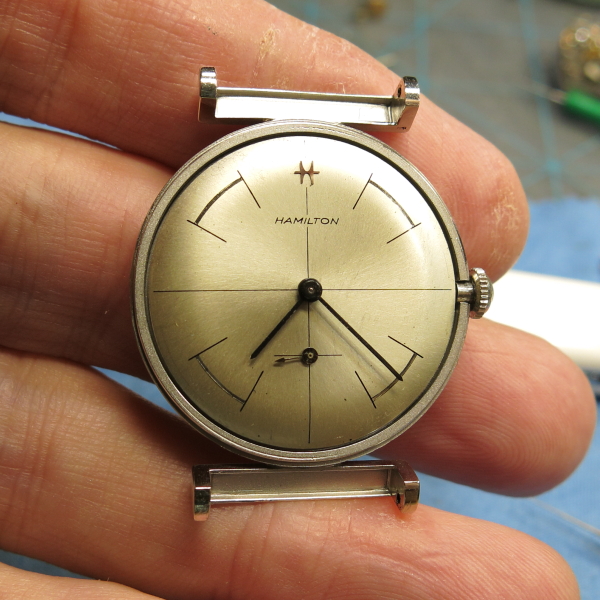 The 770 movement inside has not seen a good cleaning in quite a while, if ever.  Notice the dull haze on the movement. 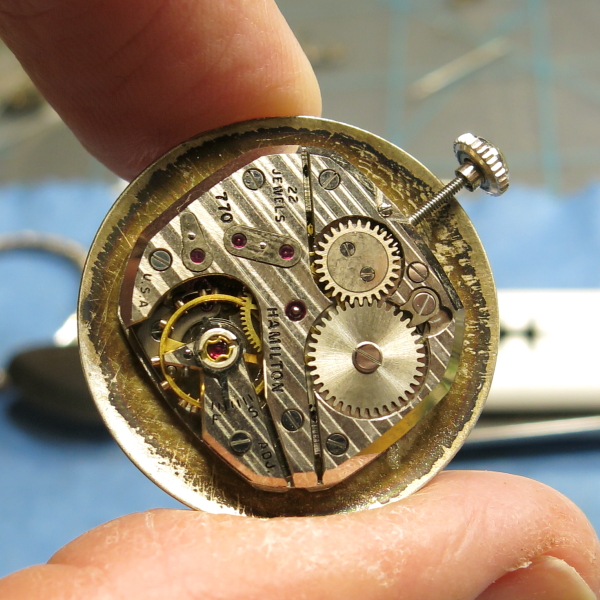 Here's a look at the inside of the case back - notice the markings.  If you don't see this type of marking inside a Hamilton watch... caveat emptor.  There are no watchmaker's marks inside the case back.  I might be the first person in almost 60 years to overhaul this movement. 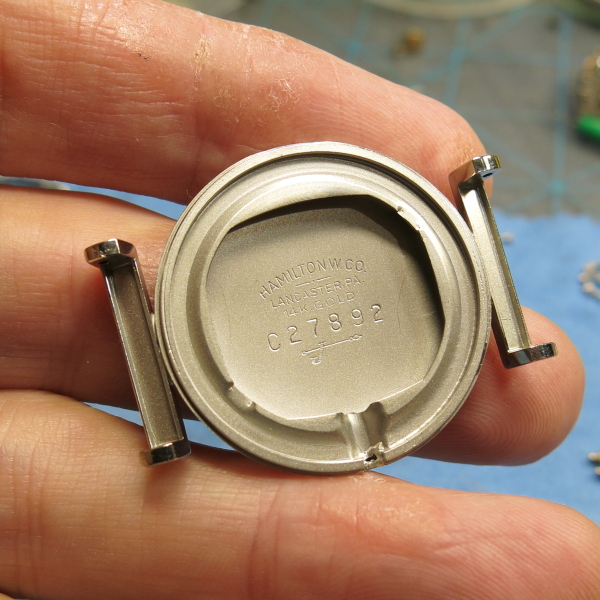 Everything is cleaned, dried and ready for assembly. 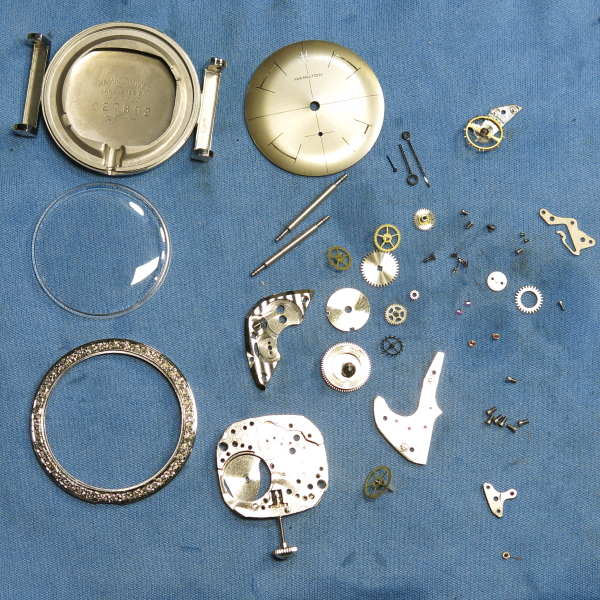 Notice how bright and shiny the movement is now.  The old oil and dirt is gone and fresh oil will keep the delicate pivots from undue wear and tear. 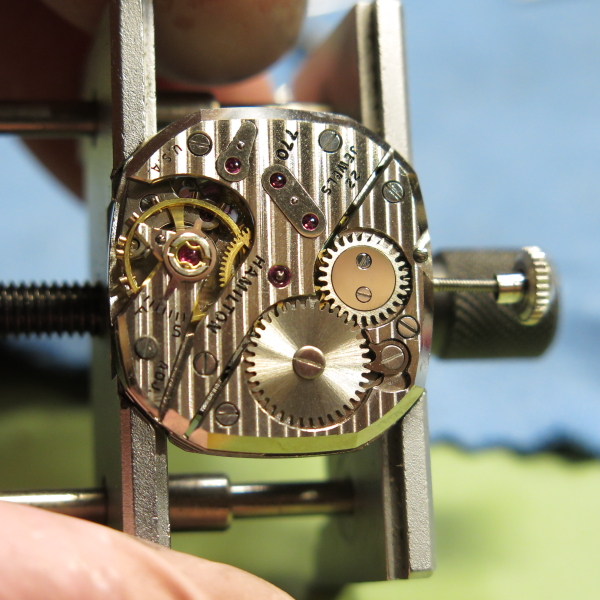 It's running a smidgen fast but a minor tweak to the regulator will bring it right in line. 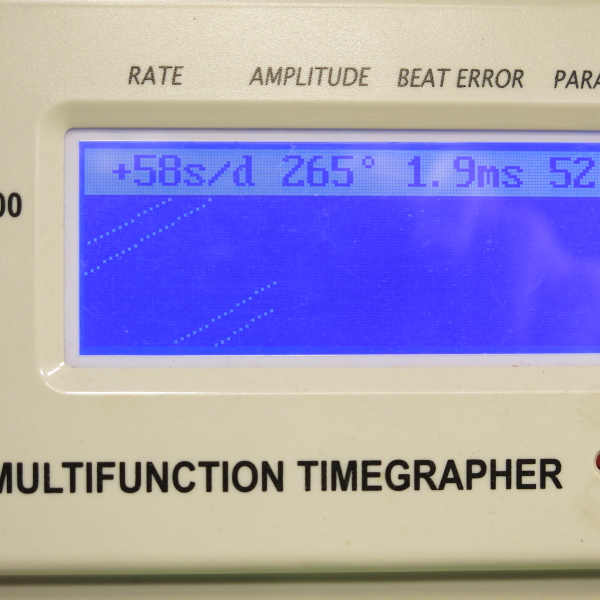 Well, this is definitely not a watch you're going to wear while mowing the lawn.  Paired with a genuine lizard strap that sparkles as much as the diamonds, it will take a special occasion to wear this beauty.  You can see I found a much more appealing second hand that matches the baton-style hour and minute hands.

This model is actually surprisingly large... but still small enough for a woman to wear by today's standards. 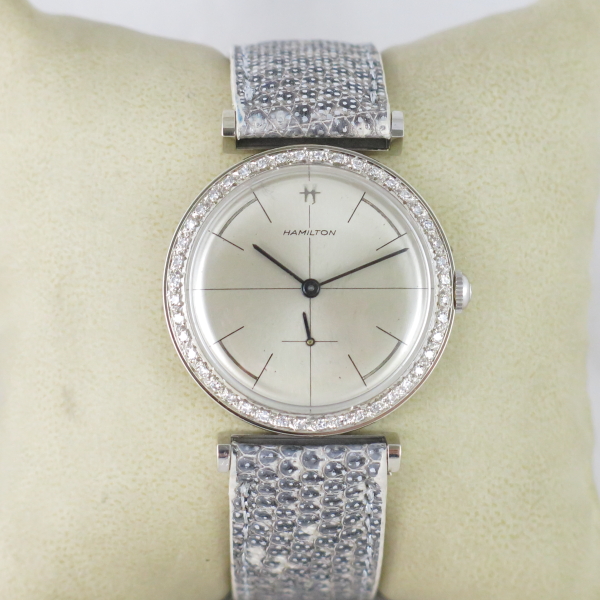 Now the question you might be thinking is, "How much is this watch worth".  I don't really know... when's the last time you saw one for sale?  What would your answer be?
Posted by HandyDan at 3:48 PM