For its first 25 years Hamilton was known for its pocket watches and being "the watch of Railroad Accuracy".  Wrist watches really didn't become fashionable until after World War I, but ladies models were made with smaller pendant-sized movements. 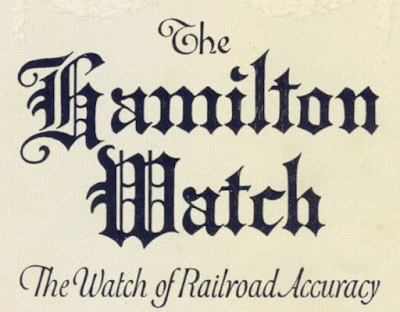 By the early 1920's, wrist watches were coming into their own.  There were a number of different ladies models presented on ribbon straps as well as detachable leather.  Like the early men's models, the ladies models were defined by their shape; decagon, tonneau, round and cushion.  They came in solid gold as well as gold filled, in white, yellow or green gold. 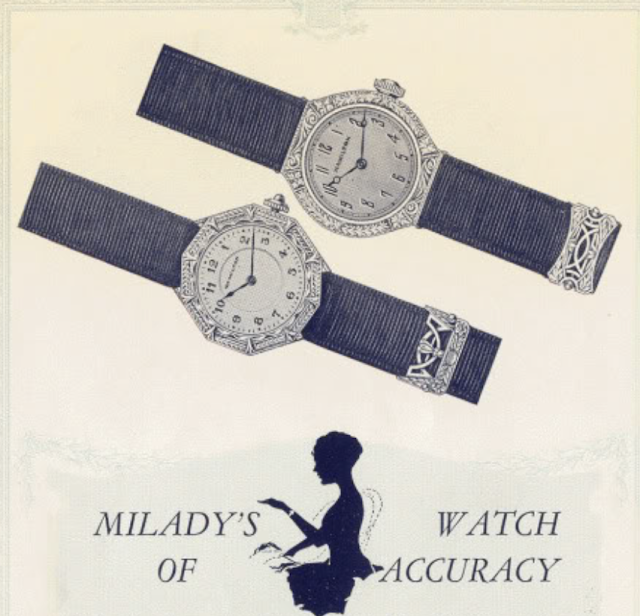 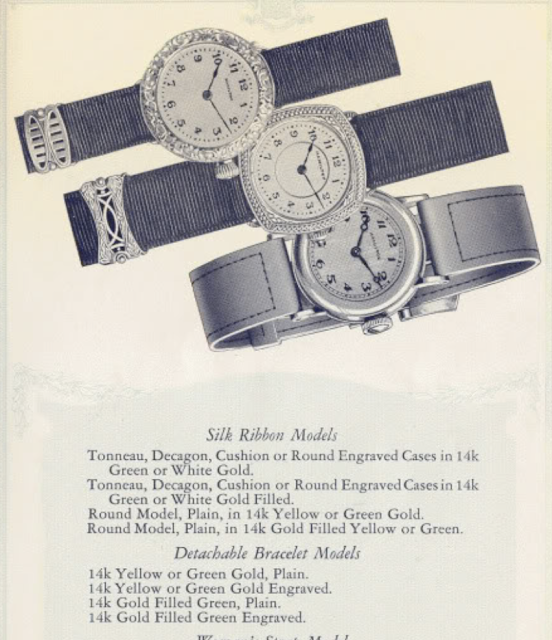 By the early 1920's Hamilton introduced its only man's strap model, eventually called the Cushion Round, based on the case shape and round bezel opening.  It featured the same 6/0 sized movement used in the ladies model, the 17 jewel 986A. 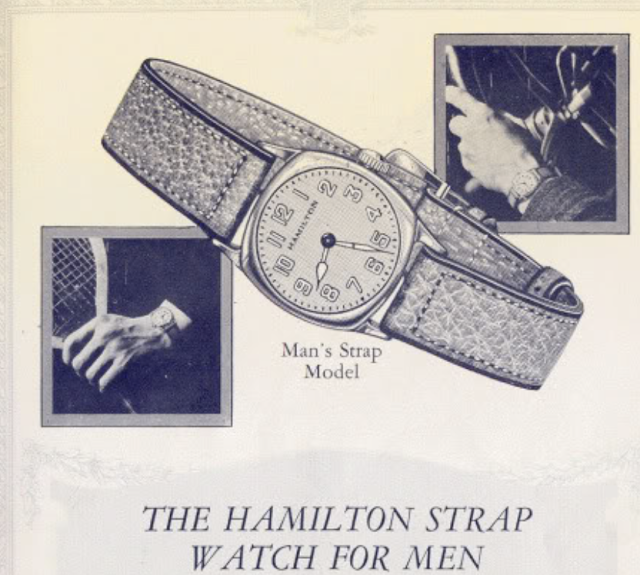 The 986A is an interesting movement.  It's a bit of a blend of the 17 jewel 986 movement used earlier in ladies pendant watches and the soon to be introduced 987 movement that would come out in 1927.

I don't particularly like working on watches from the 1920s.  Although they are quality movements, they lack the technological improvements that were eventually added and they tend to have the most "mileage".  In short, they can be worn out and very temperamental.

That said, I'm a little surprised that I haven't already shown a 986A on the blog and I recently had an opportunity after my daughter's watch stopped working.

My project watch is very similar to the one pictured in the catalog, although the dial and hands are different.  This style of hands is called "moon" hands and the crown is an "onion".  My watch is presented on a metal expansion bracelet, which makes it easy to wear.  You'd be hard pressed to find an original ribbon bracelet to mount on it, although I would certainly prefer it. 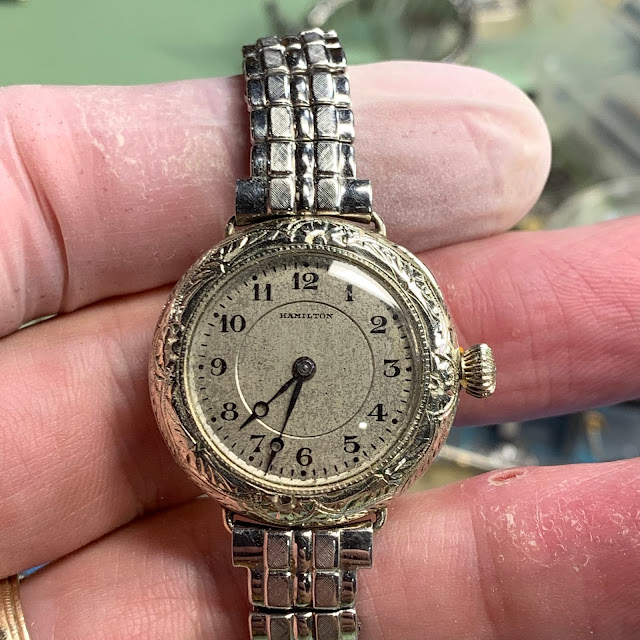 The inside of the case back is clearly a Hamilton case.  The 25 year warranty indicates it's gold filled. 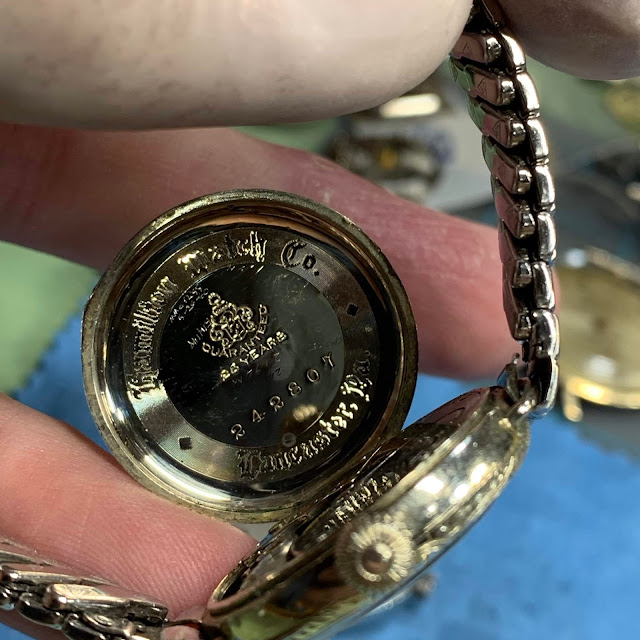 The 986A movement inside looks more like a 987 than a 986.  I can tell by the markings in the case back that I last worked on this movement in 2012.  So this watch is long overdue for a trip to the spa. 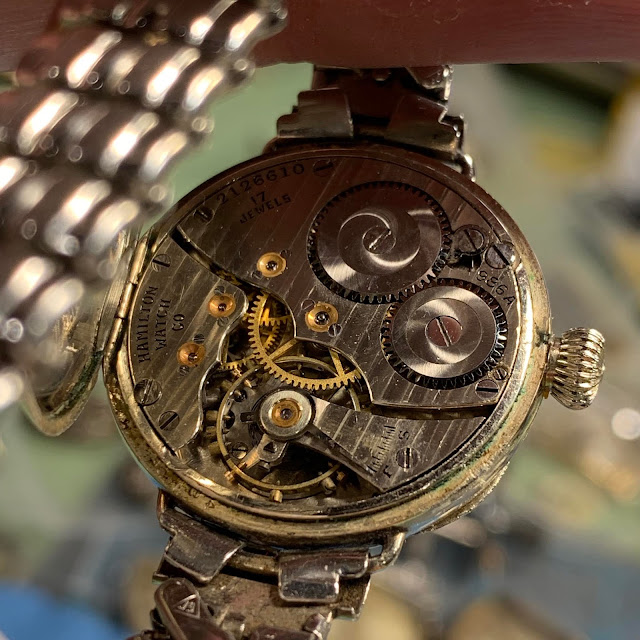 I realized that I don't have a 986A in my "overhaul examples" on one of the blog pages.  If you look at the "Pages" menu on the right side of the blog you'll see Overhaul Examples with detailed step-by-step explanation of the movements I've worked on.  I use this post to document how to assemble the 986A.

As you can see below, everything is taken apart, cleaned in the ultrasonic and dried before being reassembled. 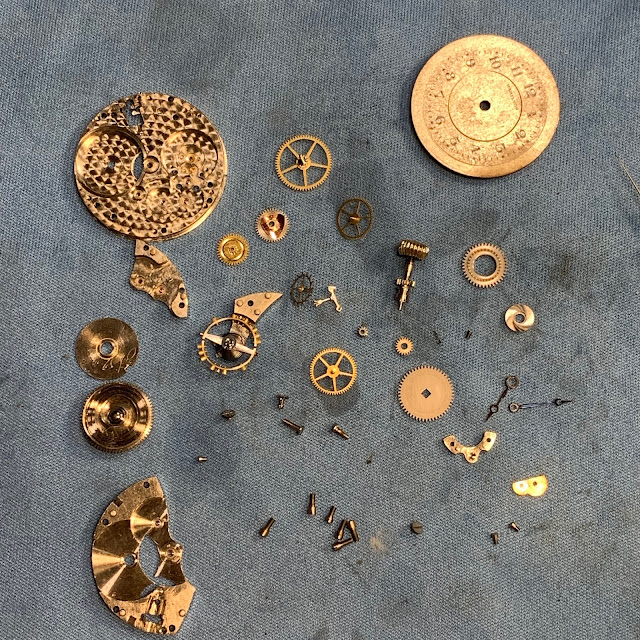 Normally I put the pallet fork on after the train wheels are in place but not on these older movements.  The pallet fork bridge has a screw that is easier to access without the center wheel installed.  So the pallet fork goes on first. 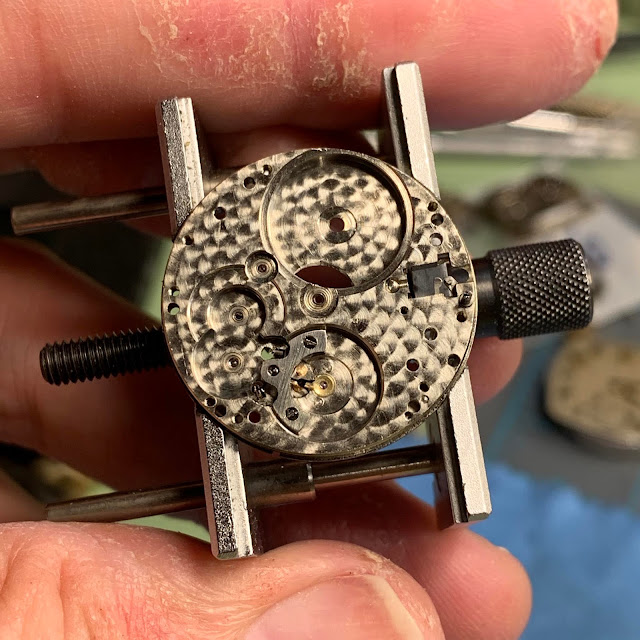 Next the escape wheel and 4th wheel go on.  I carefully position the two wheels so the pallet fork is properly engaged and then the train bridge goes on. 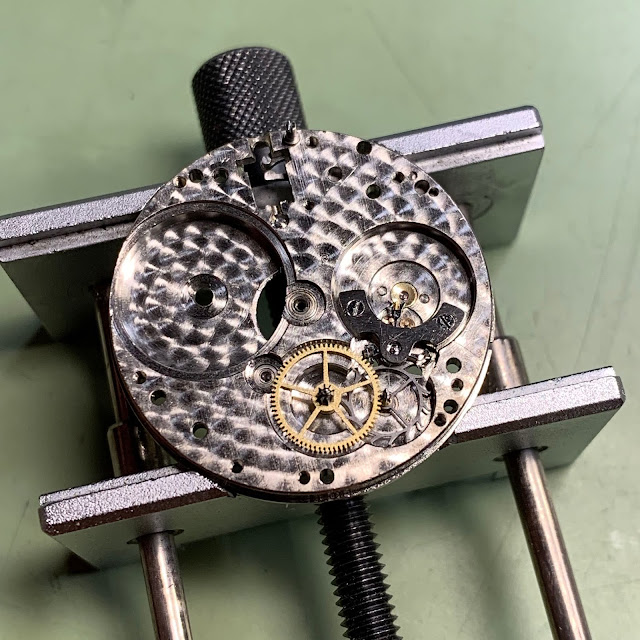 Next to be installed is the mainspring barrel, the third wheel and the center wheel.  Notice it's harder to get to the pallet bridge once these wheels are in place. 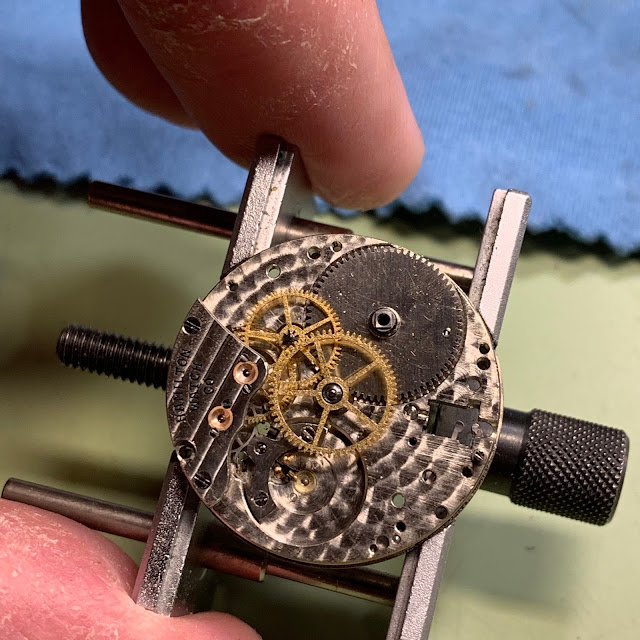 The balance cock uses a screw with a smaller head than the other bridge screws... just a little trivia for you. 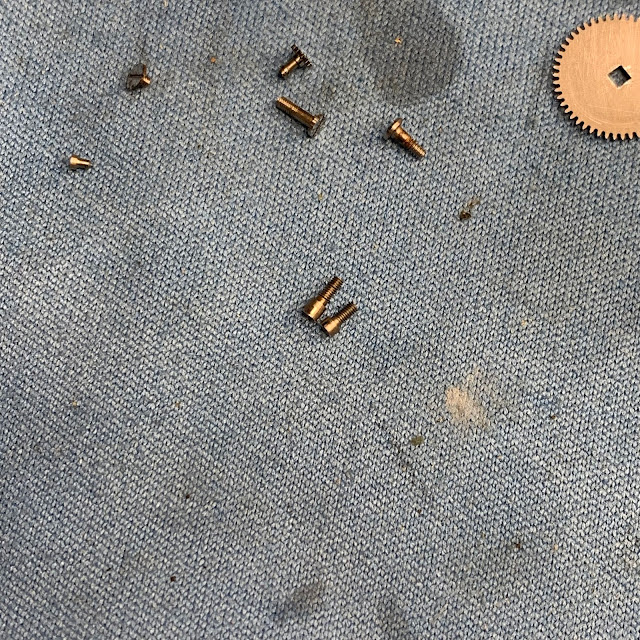 Once I installed the barrel bridge, the crown wheel and ratchet wheel, I can wind the watch a little and energize the mainspring.  That way once I install the balance, it should start moving. 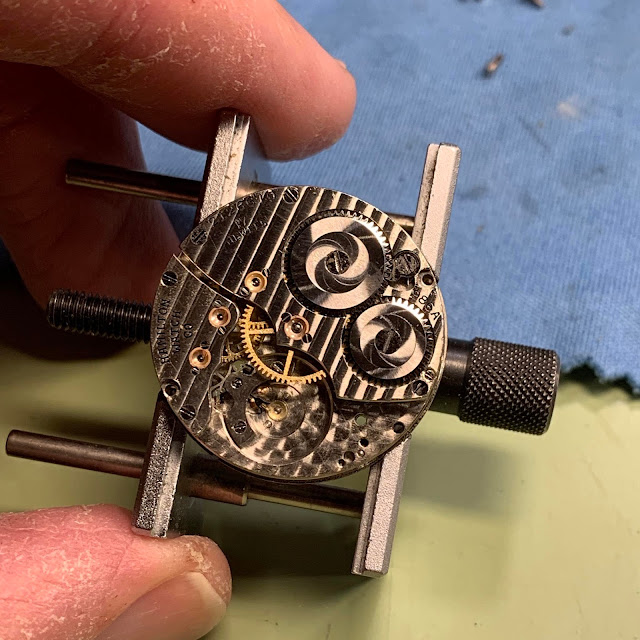 I noticed the regulator was set to full fast when I first opened the watch.  You can adjust the speed of the balance on these older movements by moving the screws at the end of the balance arm.  Move them out and the speed is slowed, moving them in will speed the watch up.  You need to be very careful with this adjustment though, as you can impact the poising of the movement, not to mention break a balance staff pivot. 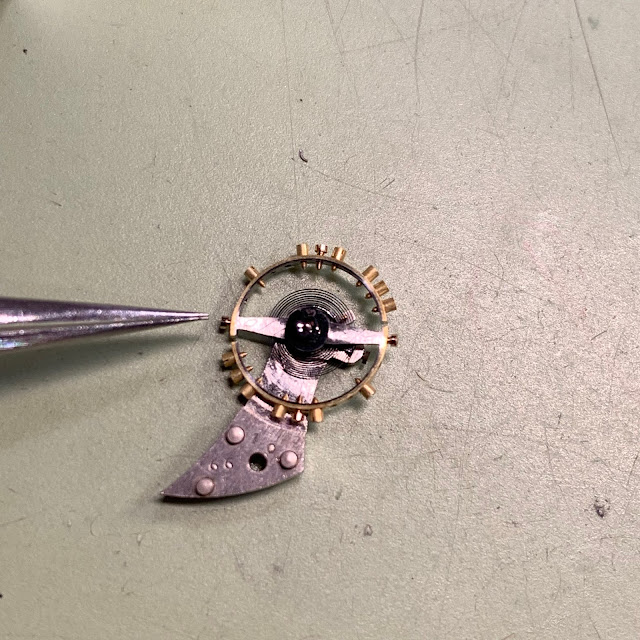 Voila... the watch is back in business and ticking away nicely.  I set the regulator back to the middle to see what's going on. 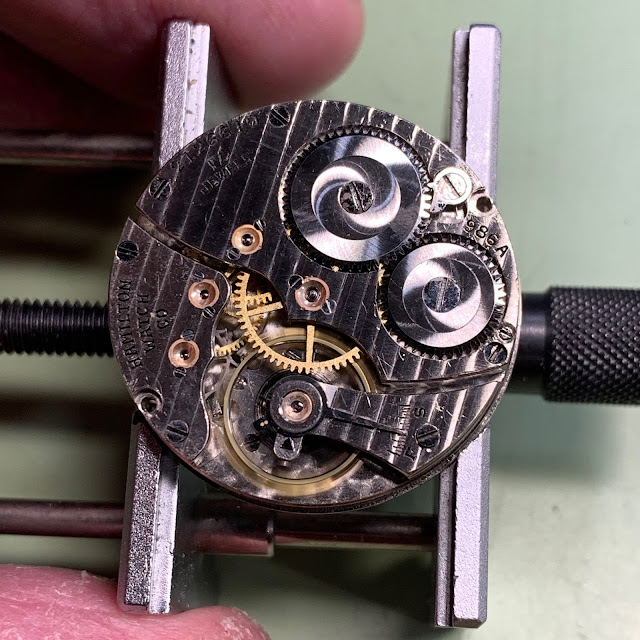 According to the timer it's looking pretty good.  I can slow it down with the regulator... it certainly didn't need to be set to full fast like it was originally. 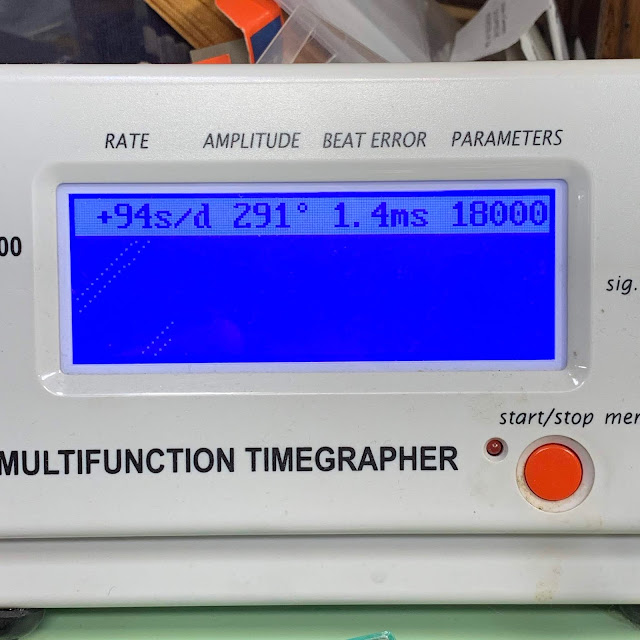 Now I can flip the movement over and install the parts on the front of the main plate. 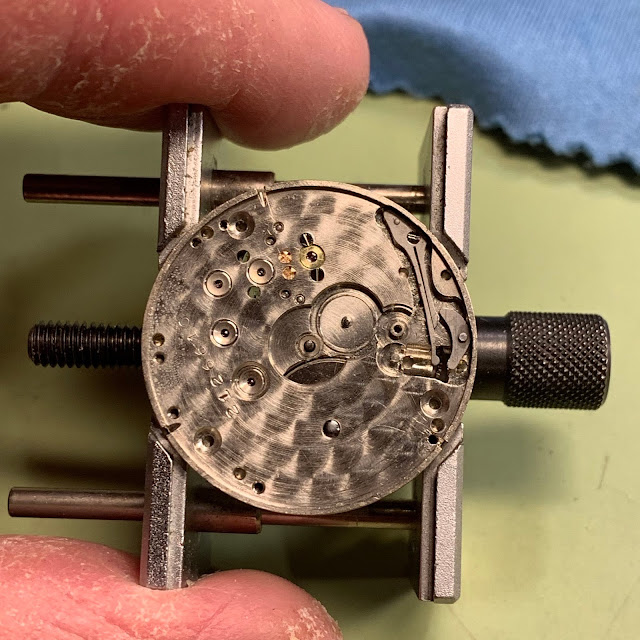 First I'll install the cannon pinion in the center.  This is what the minute hand is attached to. 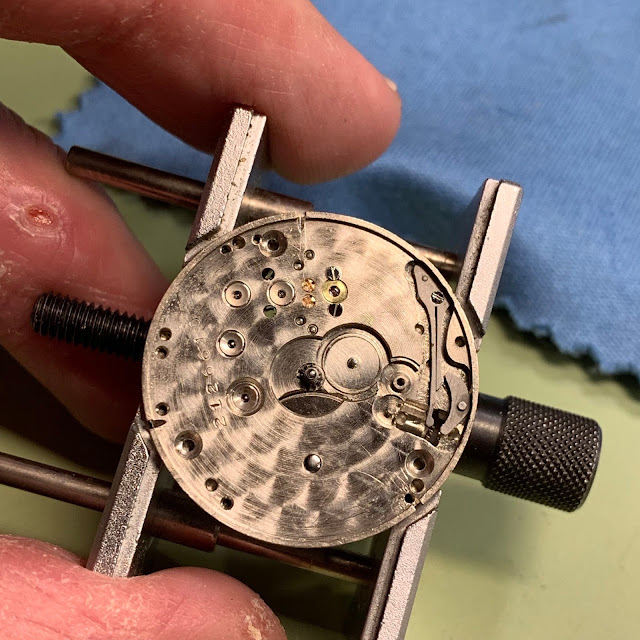 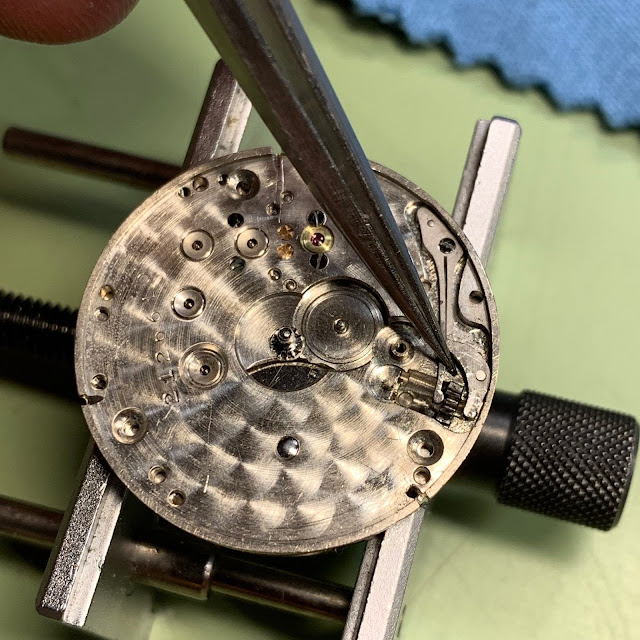 In order to get the clutch wheel in place, I need to remove the set lever spring. 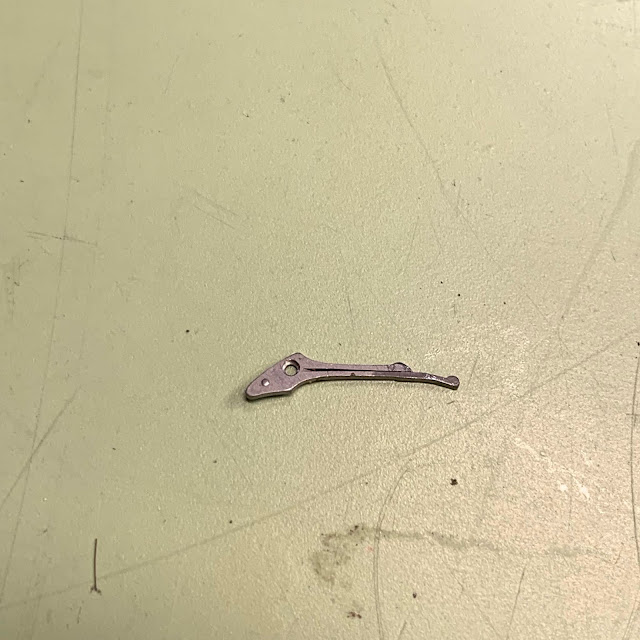 Now I can drop the clutch in place, install the stem, and put the set lever spring back on. 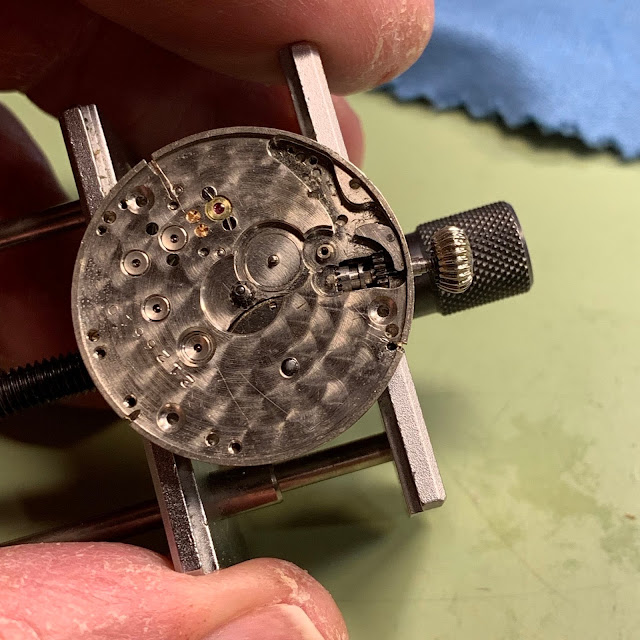 There... getting these parts on can sometimes be a challenge, glad that's finished. 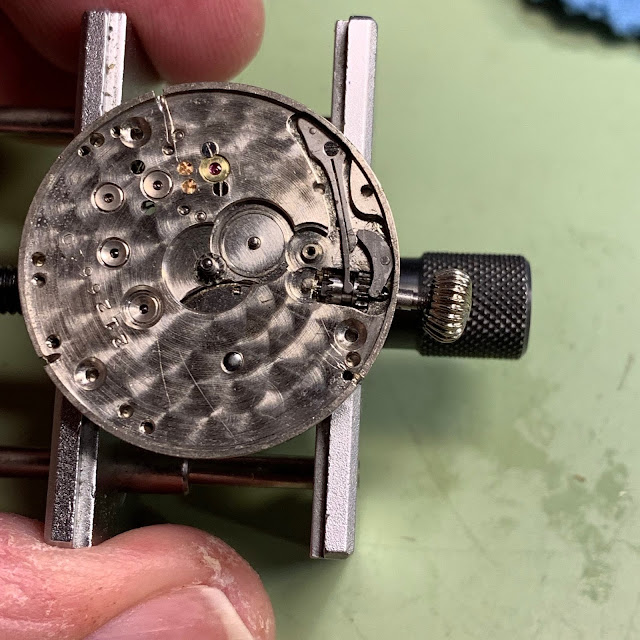 This movement has two gears in the setting portion of the keyless works.  They engage the gold minute wheel.  The minute wheel is driven by the cannon pinion and minute wheel will drive the hour wheel (and hour hand).  That's what keeps the minute hand and hour hand in sync. 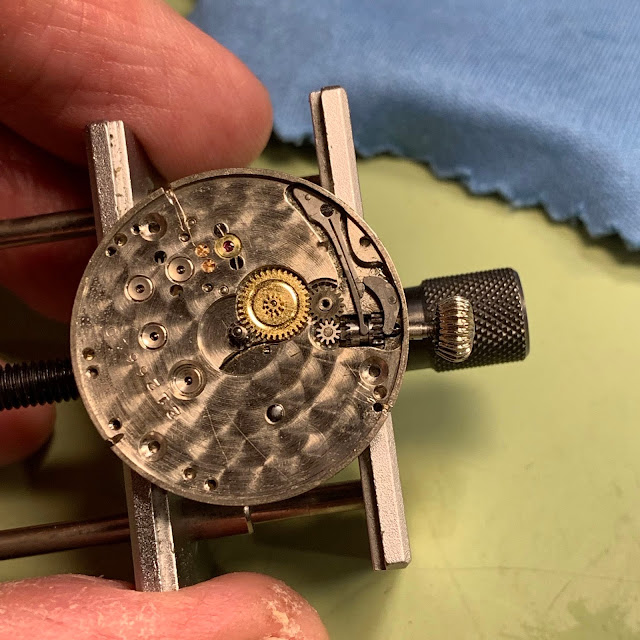 The hour wheel goes on and the set bridge... now all I need to do is reinstall the dial. 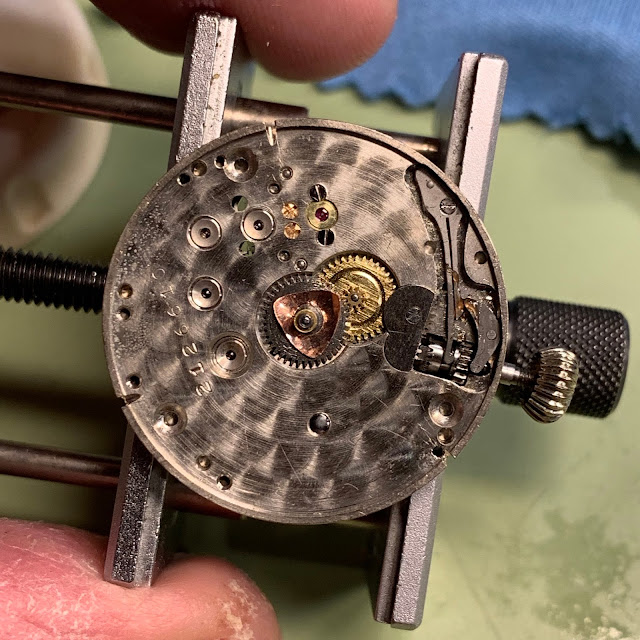 There are three dial foot screws on the side of the movement that hold the dial in place.  You need to be very careful not to drop the movement, as that's a great way to break the balance staff. 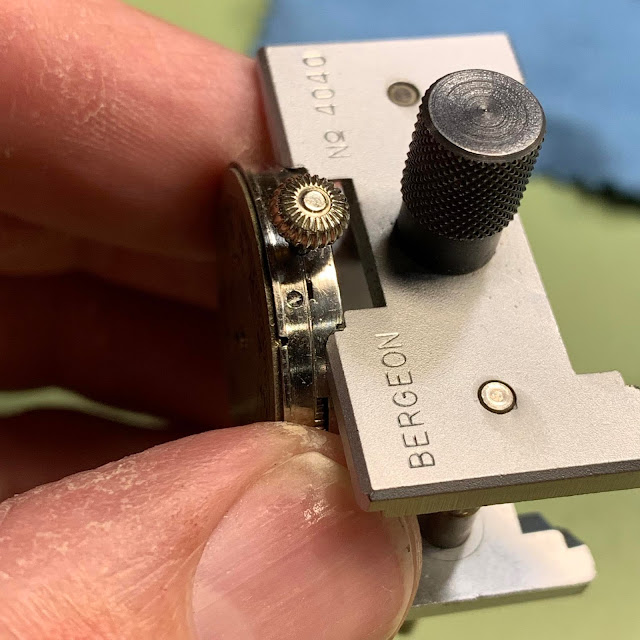 Ta-da!  The movement goes back into the case and this 95 year old watch is ready for more wrist time! 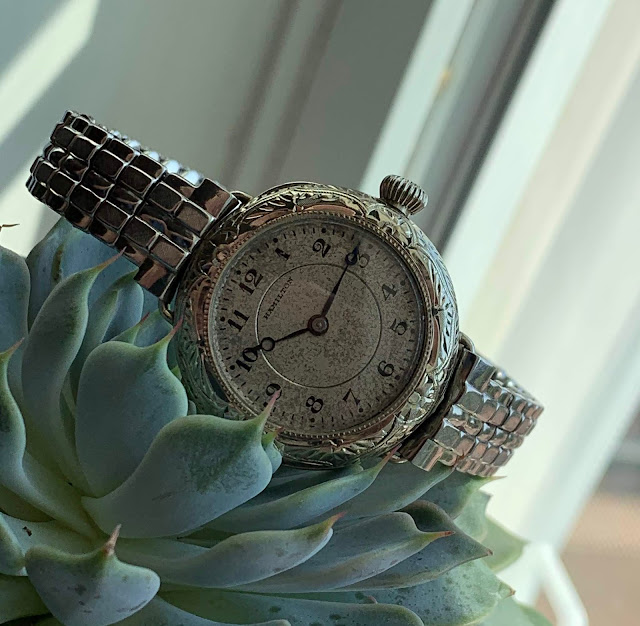