Hamilton introduced its first stainless steel wrist watch in 1941 with the Lexington but the material wasn't used that much until 1949 with the introduction of the Clinton and the Raymon.  Stainless steel is a great material for a watch case, it's less expensive than gold or gold filled, it can take a beating and it can be polished back to a nice shiny appearance.  It was used much more frequently after 1950.

The 1949 Raymon was produced for three years and you might say it was a transition model because of the "new" stainless steel case blended with elements of pre-1950 designs likes luminous hands and dials. 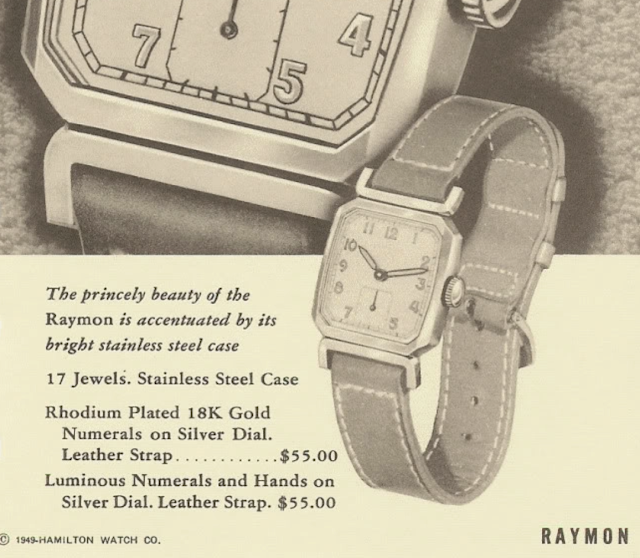 The Raymon is a fairly small watch, like most other 1940s model.  Looking at it you might assume it would have a 14/0 sized 980 movement like the Lexington.  In fact, it has the recently introduced 8/0 sized 747 movement crammed into the case.  On the applied gold numeral (AGN) dialed version, the numerals and the hands were rhodium plated to appear silver in color.  The luminous dial had luminous numerals and a special style of luminous hands, unique to this model.

My project watch came as a gift courtesy of a fellow collector.  It had a lot of issues and I'm sure he hoped I could make something of it.  Looking closely at it, I can see the hour hand is the incorrect style, it's missing a second hand, and the crown is quite worn. 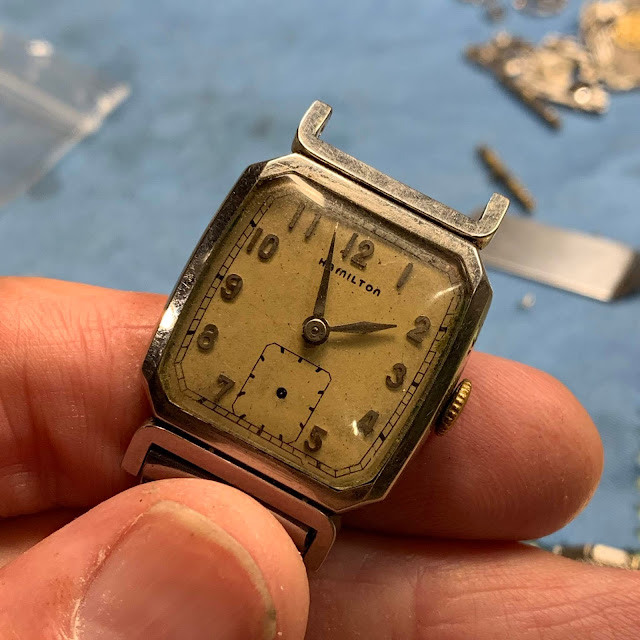 As you can see from the side, the crown is showing brass.  I assume the crown wasn't stainless steel but rather white gold filled. 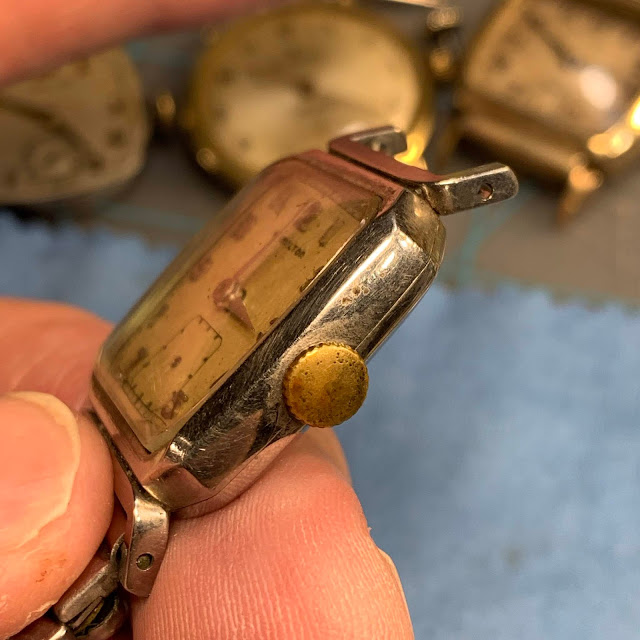 The inside of the case back clearly identifies the model name.  You can see by the number of watchmaker's marks inside that this watch has passed through a lot of peoples' hands. 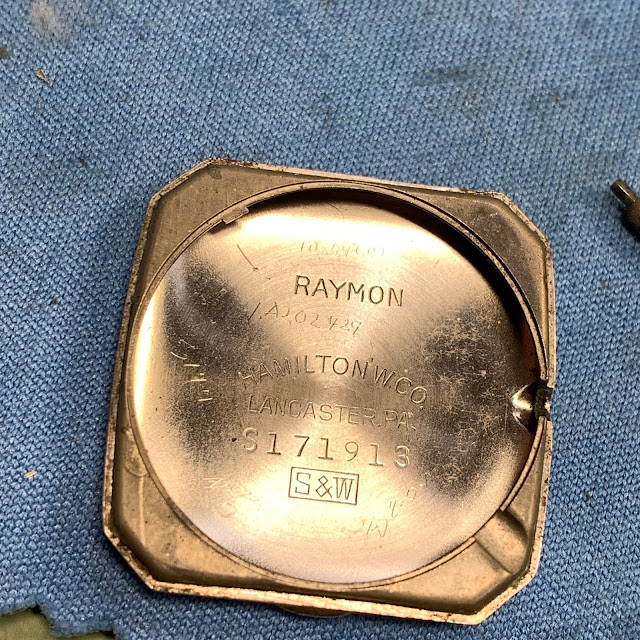 The movement appears to be in good shape but I'm sure it's been a while since it was last overhauled. 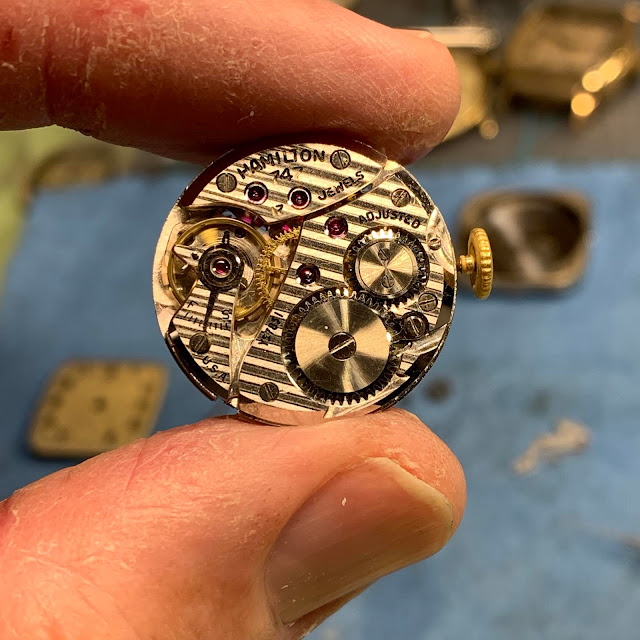 I have found that most Hamilton watches before 1950 have blue steel mainsprings but sometimes I get lucky and find a white alloy Dynavar spring has already been installed.  Not in this case though, there's a blue steel mainspring inside the barrel and it has probably "set" and lost most of its potential energy. 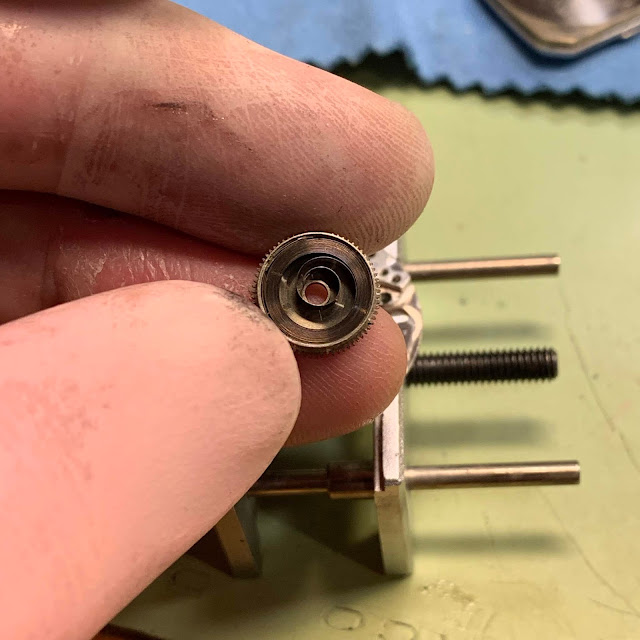 There are two 8/0 sized movements, the 747 and the 748 (or their 1950's replacements the 730 and 735, and 1960's 731 and 736).  Because the movements are quite different, there are several different mainspring strengths to choose from.  Too strong a mainspring will result in too high an amplitude and too low will result in too low an amplitude.  I'll try a standard strength spring, see how it works, and then go from there. 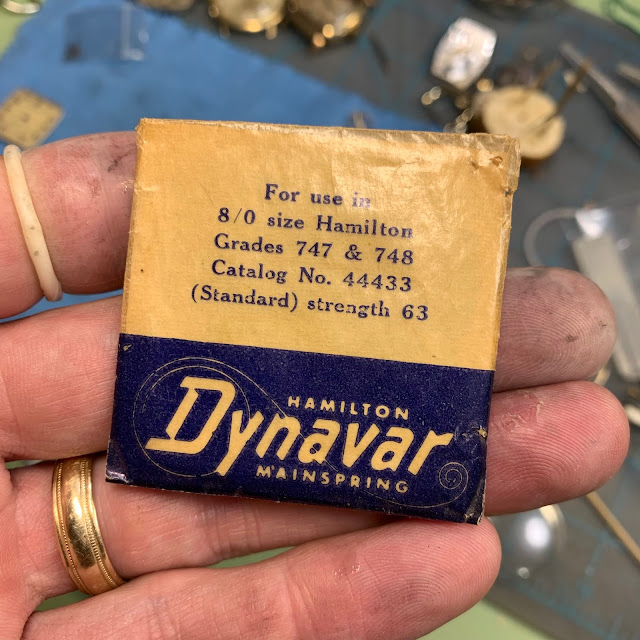 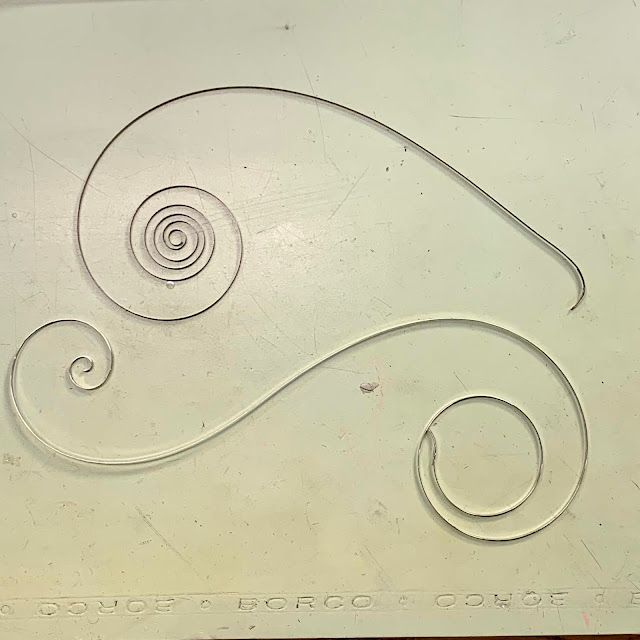 I noticed the upper center wheel jewel in the barrel bridge looked funny and upon close inspection it is cracked.  The center wheel turns so slowly that the crack might not be a big deal but I'll replace it anyway. 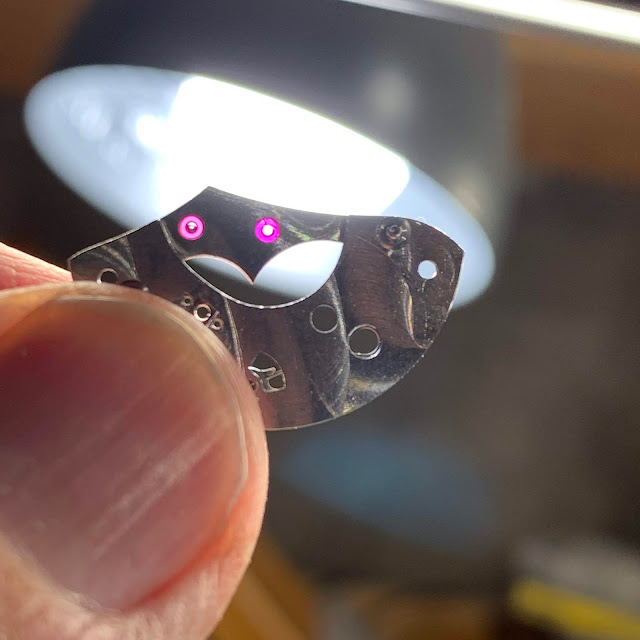 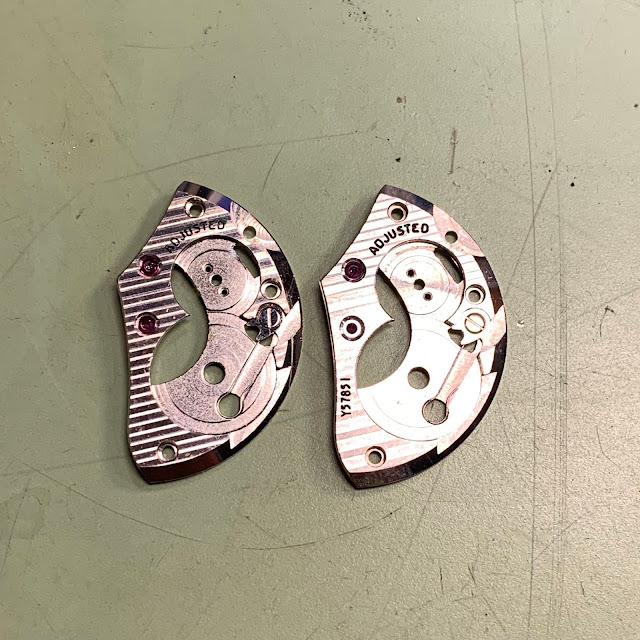 Everything is cleaned and ready to be reassembled.  I even have a new glass crystal to install. 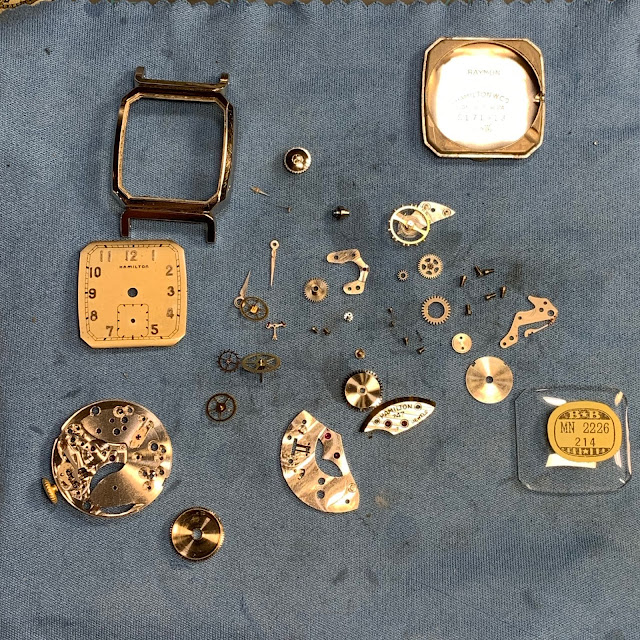 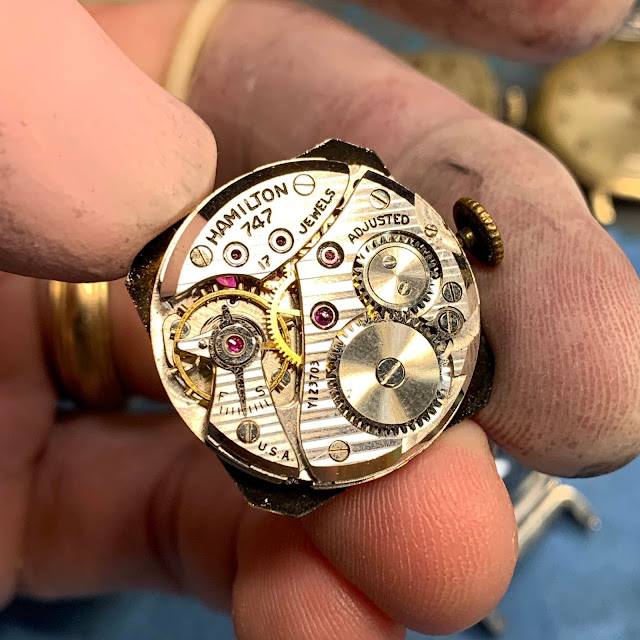 The amplitude looks good but the beat error of 4.9ms is above my upper spec of 3.0ms.  The beat error measures how far the balance swings to one side versus the other. The closer to zero the better so I'll have to remove the balance and adjust the position of the hairspring to better center the balance relative to the pallet fork. 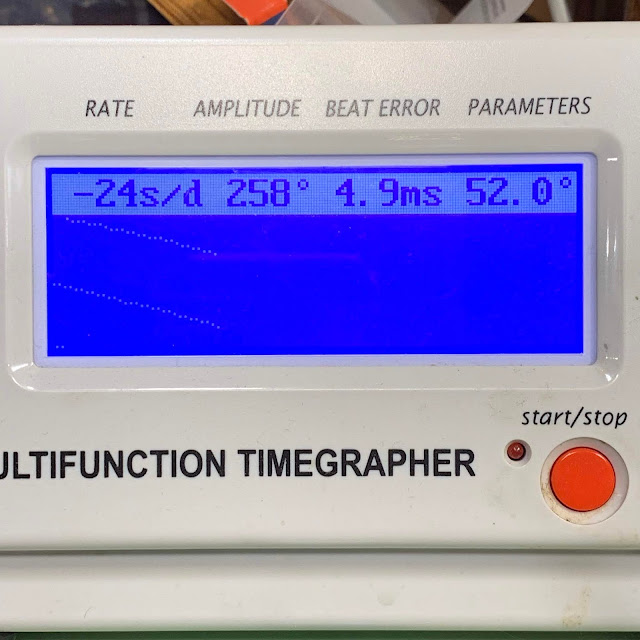 Well, I guess I could call that success... it's now below 3.0ms but not by much.  Every time I remove the balance is an opportunity to screw up an otherwise fine hairspring but I will give it one more try. 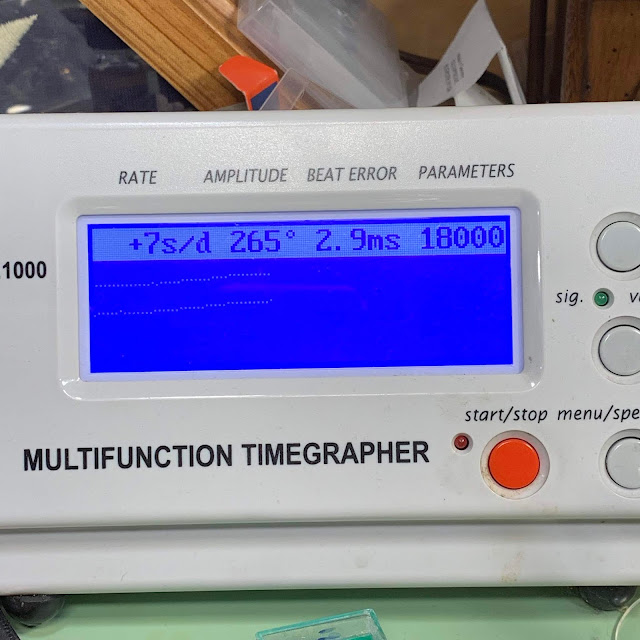 Okay - nothing to complain about now.   A slight tweak to the regulator will bring the timing down to +/- 30 seconds per day. 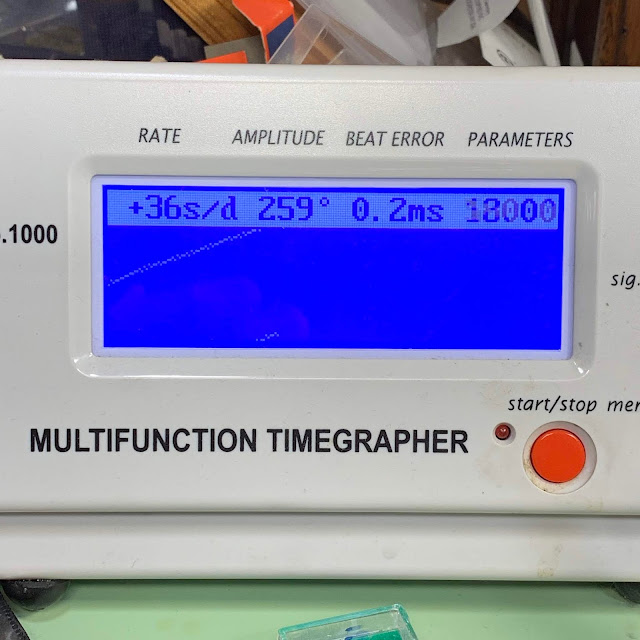 I have a new white crown to install as well as a couple of potential second hands.  The second hands are for a 14/0 size movement so the posts are too tight to fit on a 747.  I'll have to open the hole a bit.  The crown has a stylized H on it.  This design was introduced in the mid-late 1950s but Hamilton produced replacement parts for the 8/0 movements with the H logo and there's no real downside to having a crown with an H on a pre-1955 model, other than it just implies the crown is not original.  As long as it fits well and is the correct style, it's really not a big deal. 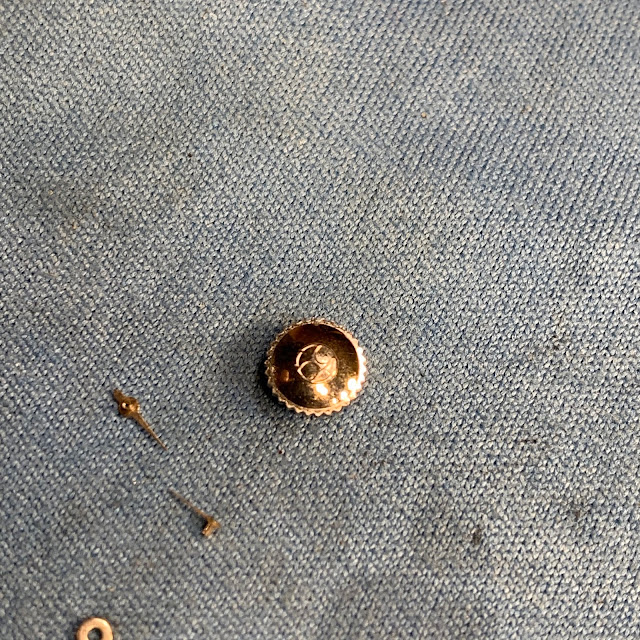 A pin vise is the best way to secure a stem while you change the crowns.  The old crown should unscrew off and the new crown screws on it's in place.  If the dimensions of the crowns don't match I'll have to replace the stem too but I think they should be okay. 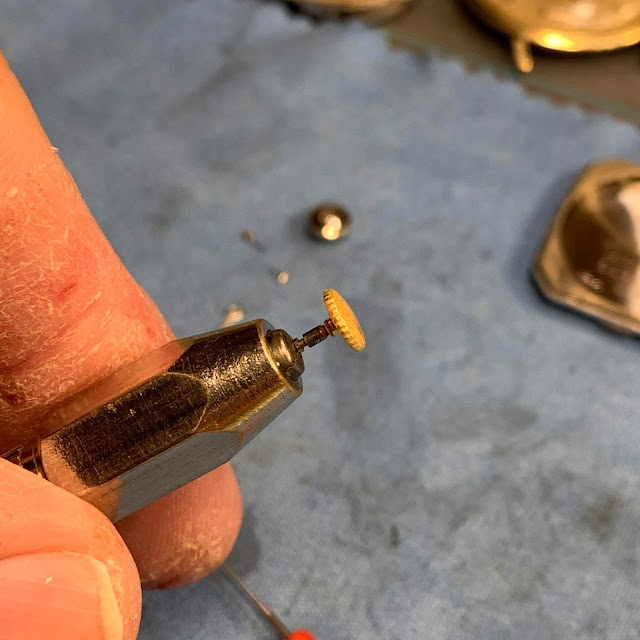 I'll use my set of tiny broaches to carefully enlarge the hole in the second hand so it will fit on the slightly larger pivot of the 4th wheel in the 747. 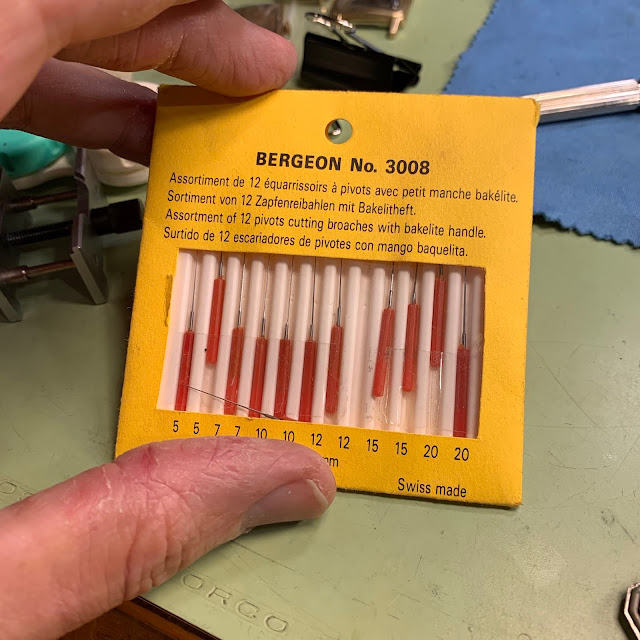 You can see below that the new crown looks like a great fit. 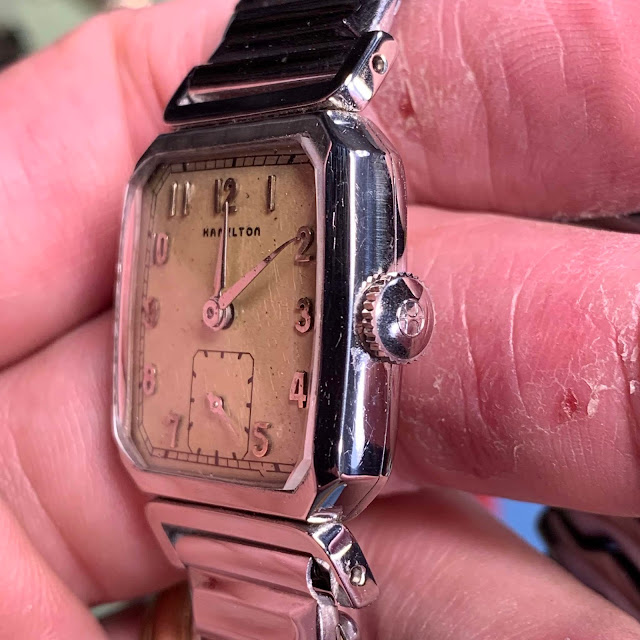 The finished project turned out great.  The expansion bracelet that came with the watch appears to be a good match, design-wise, but it's not original to the watch.  If you've got a great eye for detail you might suspect this is an older refinished dial, and you'd be correct.  It was redone properly though and it looks just as it should.  The new hour hand is a proper style and looks much better than the previous sword hand, don't you think? 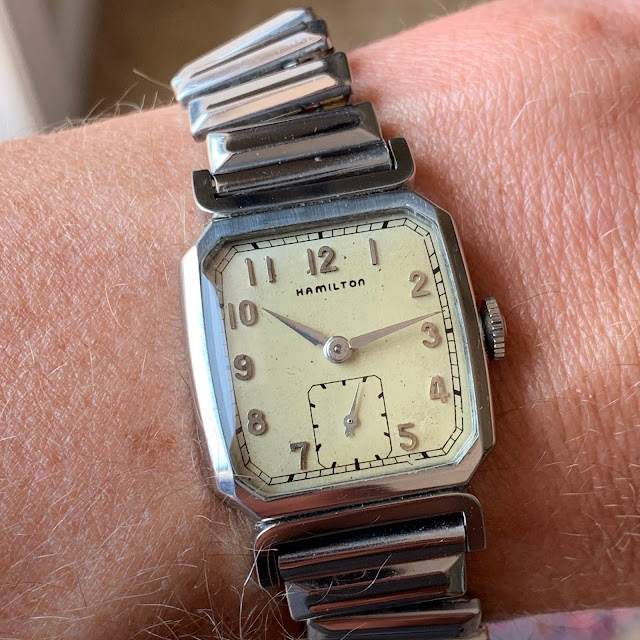 I happened to have a vintage 5/8" grey leather strap, just like this watch would have originally had installed in 1949.  I think it looks much better than the bracelet so I'll keep it like this. 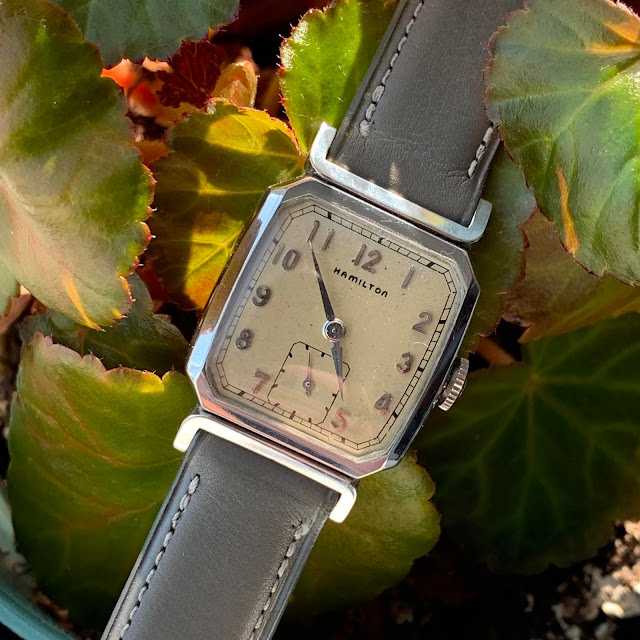