There are three different kinds of Thin-o-matic models, well, actually six if you want to include the ones with date complications.

The first Thin-o-matic models used Buren-made Swiss ebauches with small oscillating weights, a.k.a. micro rotors.  These movements include the 663, 666, et al calibers and were unique designs where all the parts were attached on the same side, or plain, of the main plate.  This allowed the overall thickness of the movement to have a very thin profile.

Also included in the early Thin-o-matics were ETA calibers that looked like the familiar ETA movements in the Accumatic line (689, 689A, et al) except the profile of the oscillating weight and overall movement was much narrower.

You can easily tell what type of movement is inside a Thin-o-matic by looking at the back of the case.  If it's wide and flat it's a micro-rotor and if it's pie-pan shaped it's got an ETA movement inside.

In the 1967 time frame Hamilton had acquired Buren and a new generation of Thin-o-matic models were introduced.  The new micro-rotor movements look similar to the earlier generation but there are a number of critical differences.  One of the biggest is the center wheel is offset in the second generation calibers and that can present a significant challenge to collectors today.  The other, more obvious, difference is the earlier micro-rotors were plated with a pink plating while the second generation are nickel plated.

Hamilton changed the model nomenclature for the new generation of Thin-o-matics from T-something to TM-something.  So if the model name begins with TM then you know it's from after 1967.

My project watch has seen some use but appears to be in decent enough shape.  Stainless steel cases can really take a beating.  The bracelet is a period correct Kreisler design but not the same as what's shown in the catalog.  It seems to still go nicely with the florentine pattern on the bezel though, so I'll reuse it. 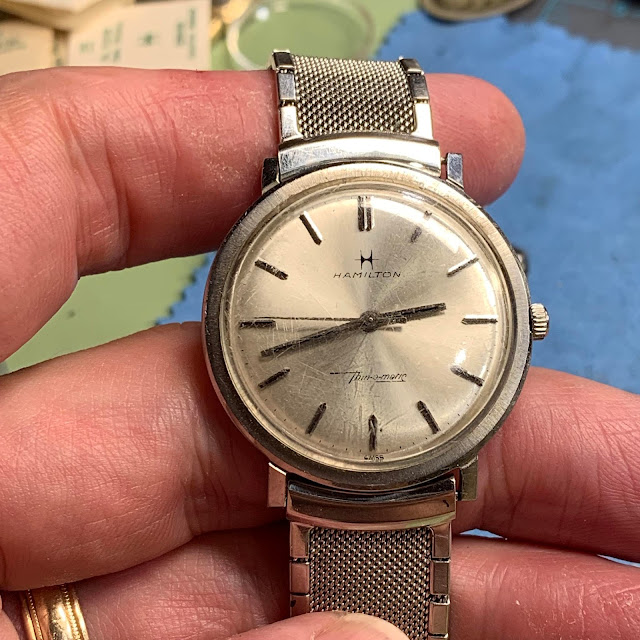 Here's a shot of the case back showing you clearly the wide flat profile of a micro-rotor case.  I wasn't sure what model this was originally so I was hoping to see a pink movement inside. 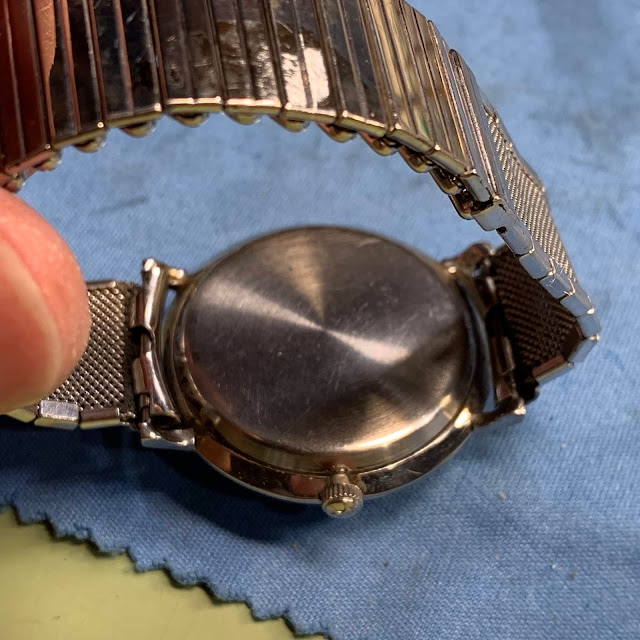 Kreisler was one of several bracelet makers that made bracelets for Hamilton models.  I think between Kreisler and JB Champion, you probably cover 90% of the models but makers like Gemex, and others, where used too. 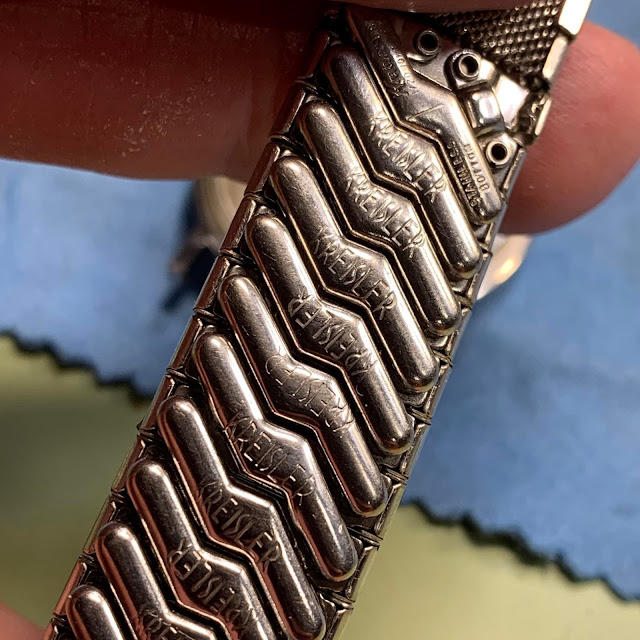 Without the crystal installed you can see the dial is actually in good shape.  Now that the crown has been separated from the male-side of the two-piece stem, the movement can be lifted out. 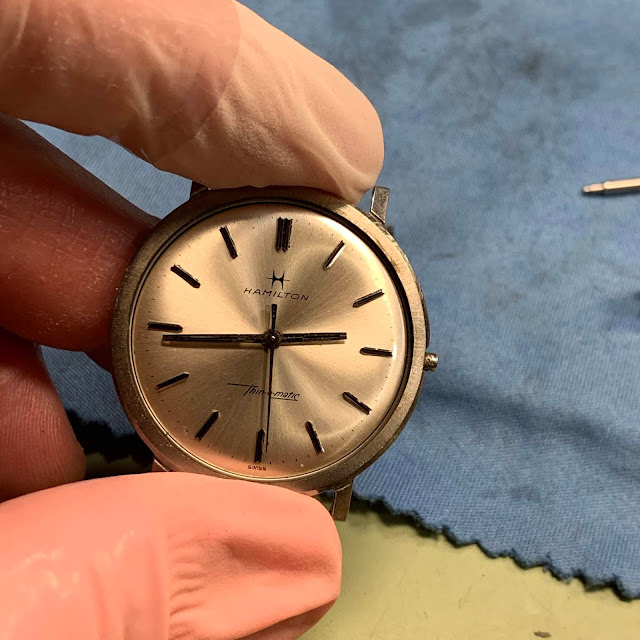 Darn... the movement inside is a 628 movement.  Although this looks a lot like the earlier 663, 666, etc. calibers, these newer movements are prone to having loose cannon pinions on the offset center wheel resulting in the hands not moving, even though the movement keeps accurate time. 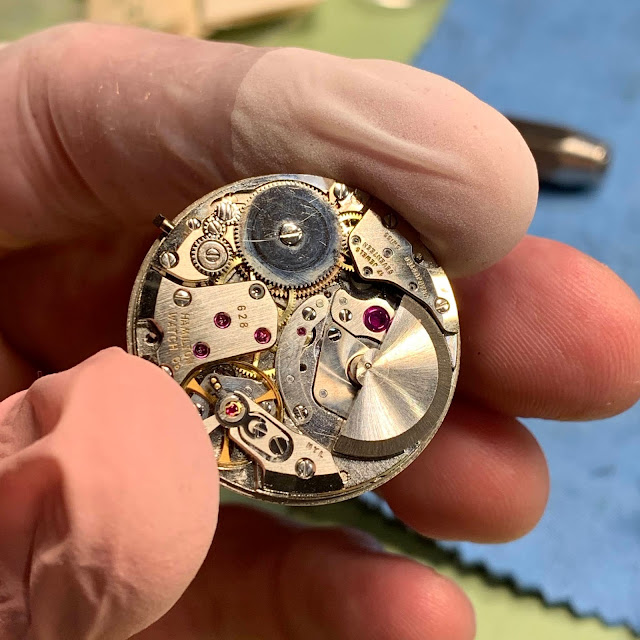 Here's a photo of the inside of the case back.  Notice there are two numbers, the one at the bottom is the model number and the last two digits are 67, indicating this is a 1967 model.  The other number is a unique serial number for this specific example. 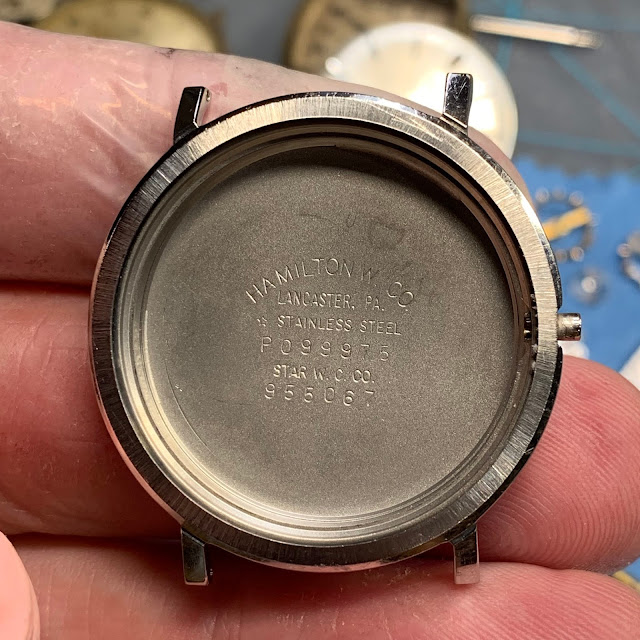 With the dial out of the way you can see where the cannon pinion that holds the minute hand is installed. 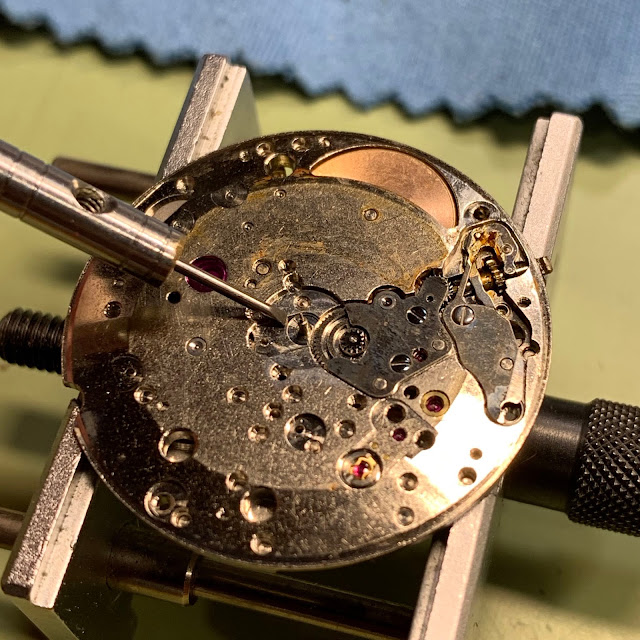 With a couple more parts removed, you can now see the offset center wheel.  The part where my tweezers is pointing is what drives the hour and minute hands.  It's a friction-fit part that is installed on the center wheel and is meant to slip when you set the time but hold when the watch is running.  That allows you to set the time without jarring the train wheels.  Over years and years of use, the friction yields so that the center wheel will turn as it should but this part won't move the hands, or the watch will appear to run very slow. 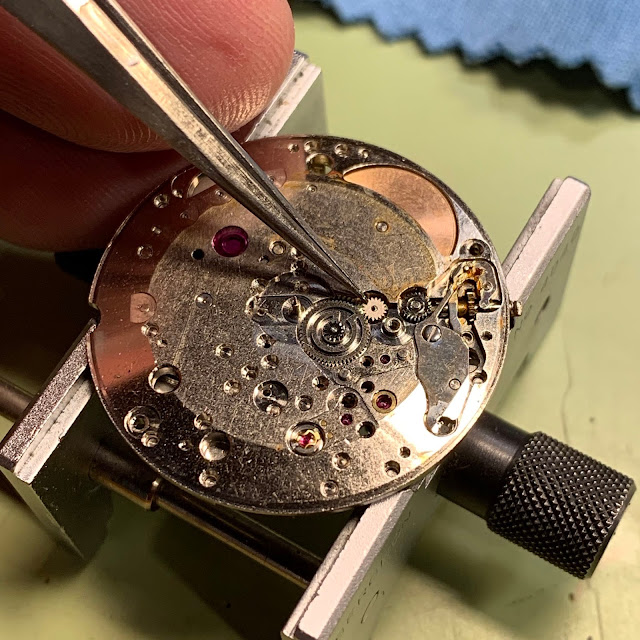 Parts for these types of micro rotors are no longer available so the only solution is to try to tighten the center wheel (but not too tight) or scavenge a part from a donor movement. 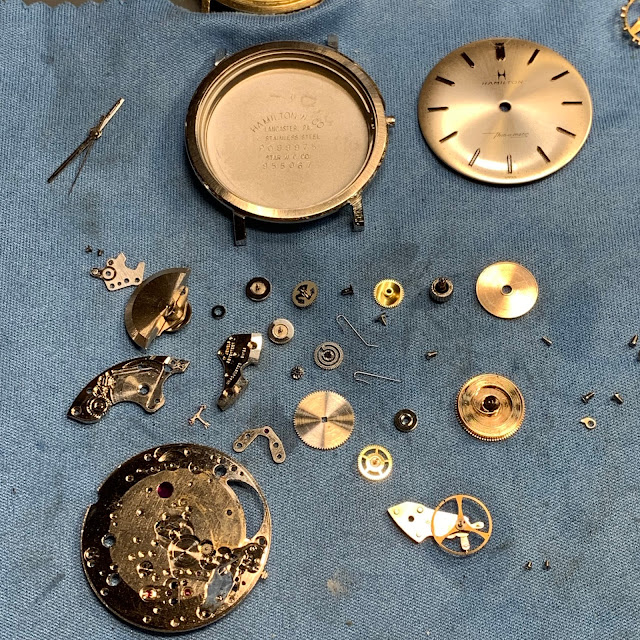 These two springs are used in the barrel bridge.  You need to be very careful with them as they are known to disappear, never to be found again, with the slightest of tweezer pressure. 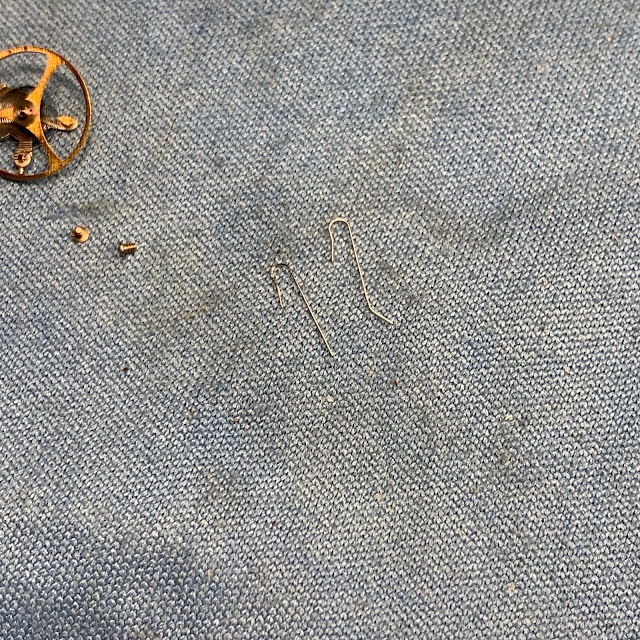 Phew!  Did I mention I don't like working on these movements?  Finally it's almost all back together and now running. 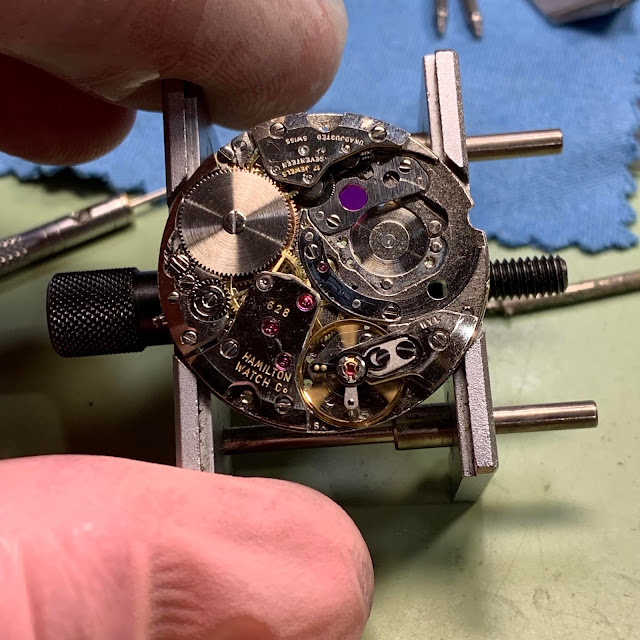 One of the differences between the first and second generation of movements is the beat rate.  Notice this movement beats 19800 beats per hour instead of the typical 18000 BPH.  This movement is running just a little fast but the other specs look acceptable. 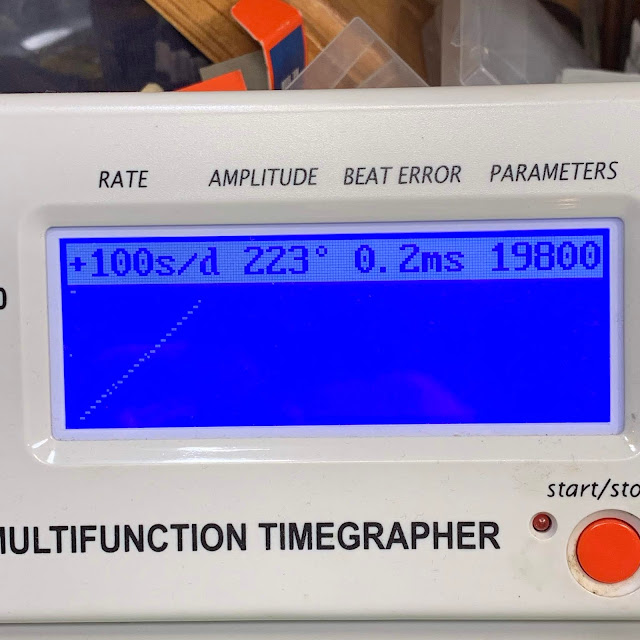 A new crystal makes this watch look 100% better.  In fact, it looks almost brand new.  It definitely looks as good as it runs - but I'll need to watch it to make sure the hands are not slipping. 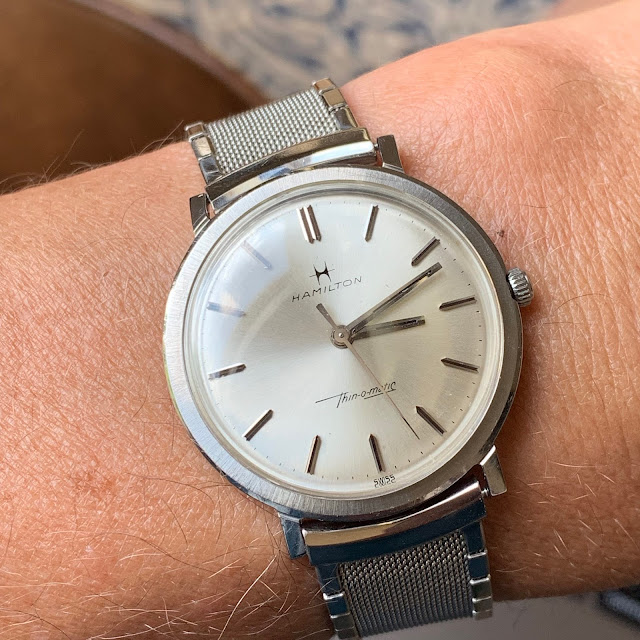