If you wanted to have a small, but exquisite, collection of Hamilton watches you would focus solely on the platinum models.  Only four show up in the catalogs, although there are a few other special models.  The four you might find are the Meadowbrook, the Rutledge, the Richmond - all from the 1930s and the last one was the 1951 Cambridge.  If you were really lucky you might spot one of the four Piping Rocks made in platinum or even the Oakmont - of which one was made according to Hamilton records.   I think you might find an Oval or two in platinum as well as a couple of other specially made models.

If you do see a platimum model, be sure to do your research because it was common practice for jewelers to recase Hamilton movements in aftermarket platinum cases and bling them out with diamond-encrusted dials.  Those are not authentic models and Hamilton passionately discouraged the practice but with little success.  The most obvious tell for these mules is the movement is typically the 17 jewel 980 - which Hamilton would never have put in a solid gold or platinum case.

Anyway, you'll definitely be able to find Rutledges and the 1951 Cambridge in the wild and they are both beautiful and elegant models.  The 1951 Cambridge is the second model to use the Cambridge name.  The earlier model was made in 1931 only and you won't find too many of them out there. 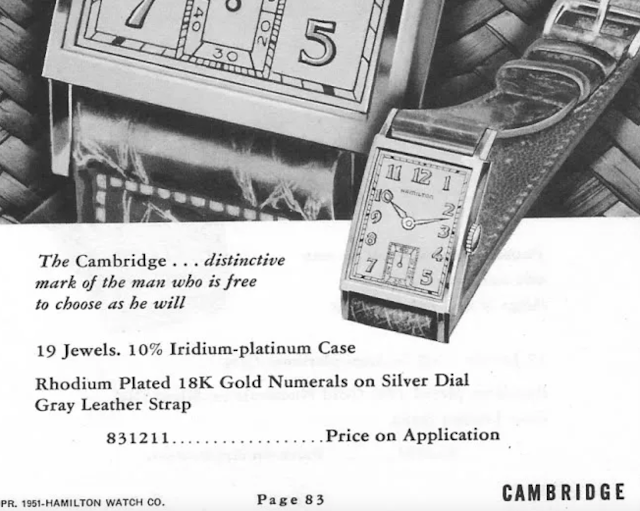 As you can see in the catalog add, the 1951 Cambridge came in a 10% Iridium-platinum case.  Platinum is a very interesting metal and it was alloyed with iridium to improve the physical properties.  One interesting fact with platinum is you cannot polish it to a shine.  You can try, of course, but the best you'll get is achieve a dull shine and eventually you'll lose any sharp corners.  Cleaning the case is really all you can do.
Tucked inside the case is a 19 jewel 14/0 sized 982M movement.
My project watch arrived in typical, "as found in a drawer" condition... it looked okay but it was wound-tight and not running. 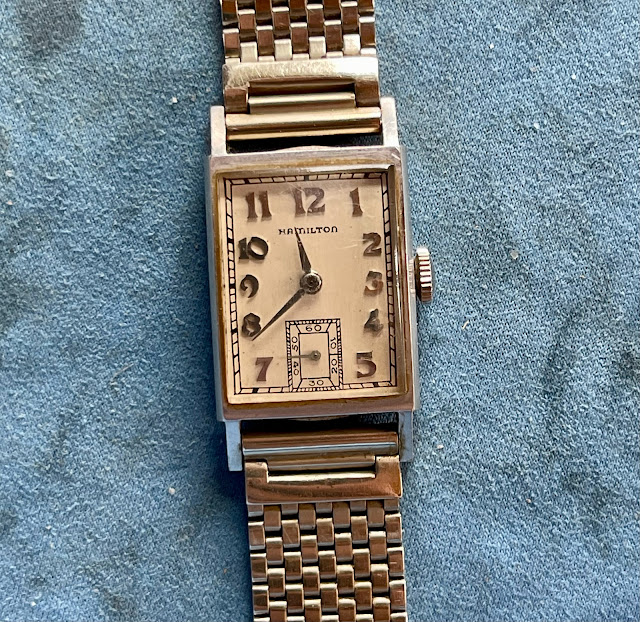 The metal bracelet is actually solid 14K white gold and marked Hamilton.  I doubt it's original to the watch but possibly it is.  Only the original owner could tell you. 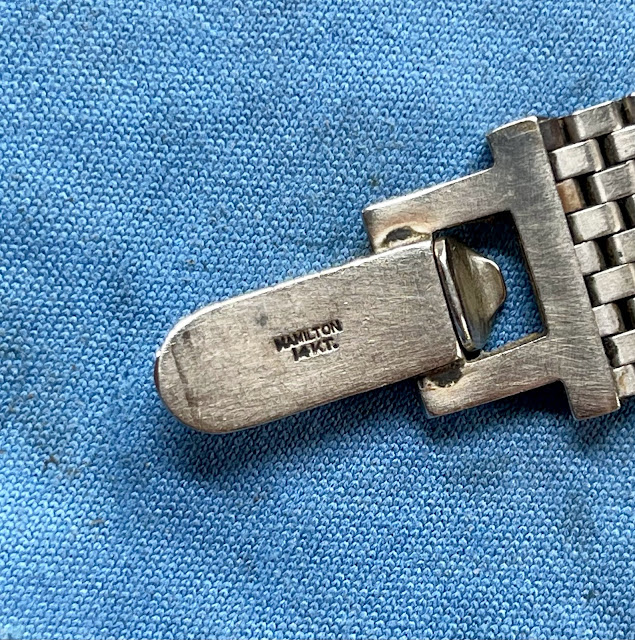 If you see a platinum watch for sale, be sure to look at the inside of the case back.  It should say Hamilton Watch Co Lancaster PA inside or you should be dubious.  This example even says Cambridge inside so there's no doubt that this is the real deal. 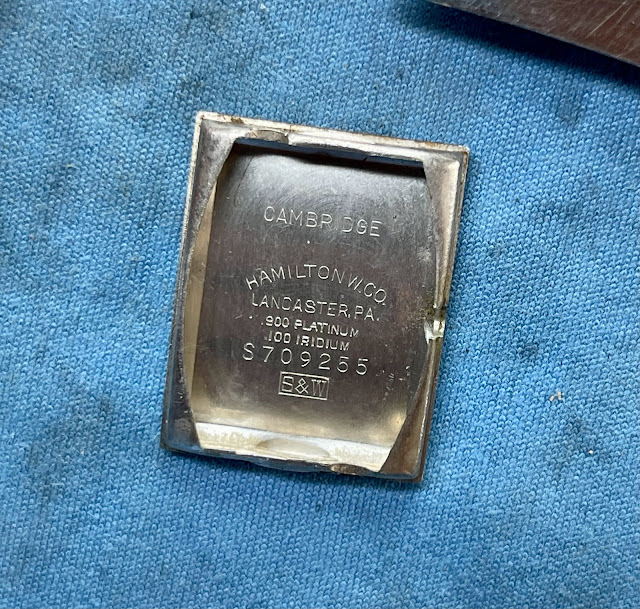 The 982M inside is what you'd expect to see and although the photo is a little soft, you can see the versions from this period don't have the solid gold medallion on the train bridge, just a circled M. 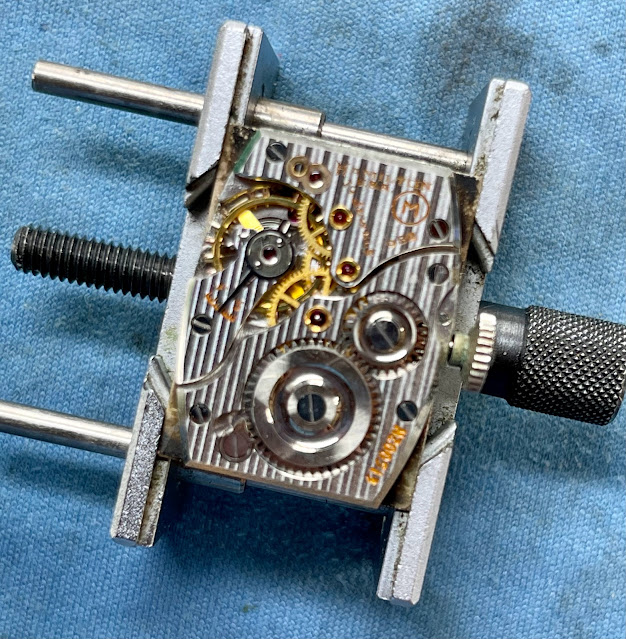 When I released the mainspring it slowly unwound and told me the inside of the barrel was gummed up.  Sure enough, opening the barrel you can see the tell tale green funk of old grease that has turned to a gel. 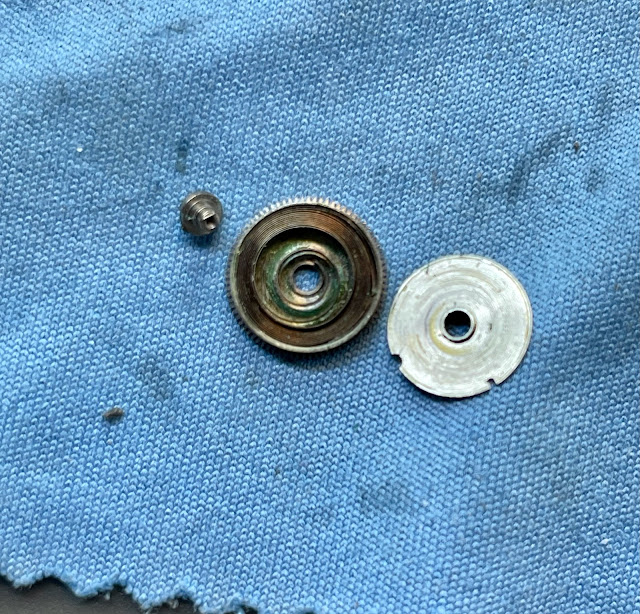 Nine times out of ten when you see a blue steel mainspring it's going to be "set" in a tight coil and this example is no exception.  I'll replace it with a fresh white alloy Dynavar spring. 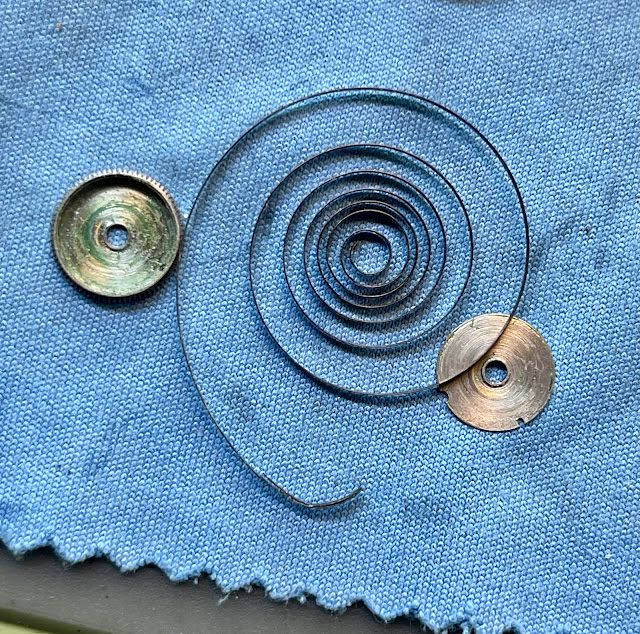 Everything is thoroughly cleaned in the ultrasonic and then dried before reassembly. 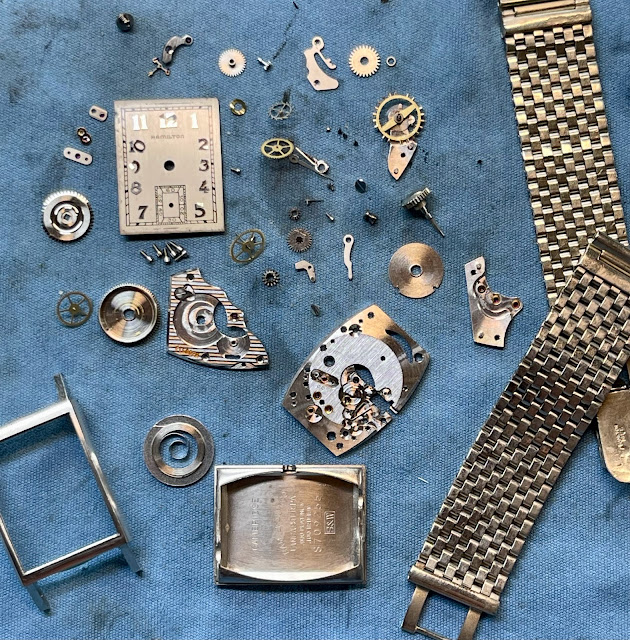 The reassembled movement is now noticeably brighter and it's ticking away with a nice motion.  I'll put it on the timer to see how well it's doing. 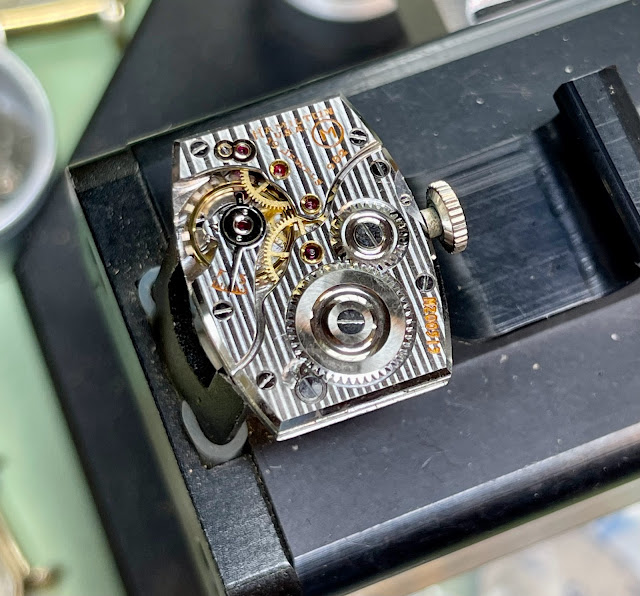 No complaints to be made here.  I'll leave it just as it is. 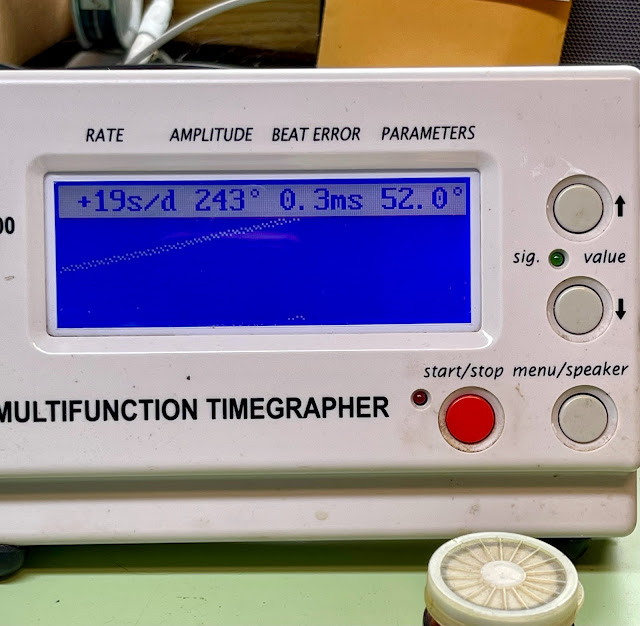 I polished the acrylic crystal and put a fresh set of hour and minute hands on since this is such a great model.  The finished project now looks fantastic and it runs as well as it looks. 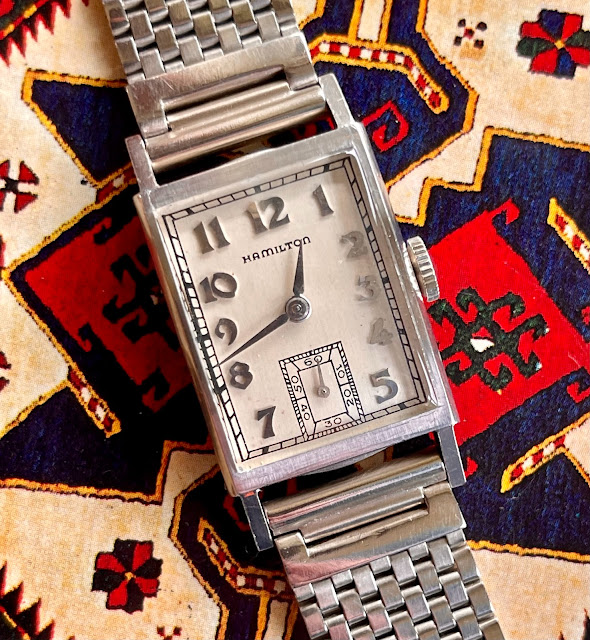