Just like swimming pools and boats, sometimes it's nice to have friends when it comes to watches.  A friend of mine recently asked me to check out a new acquisition he made... a Rutledge!

Hamilton made watches in all sorts of materials ranging from stainless steel to silver, from gold plated to solid 18K gold, and in some rare circumstances - even platinum!

I would be willing to bet that most of the time you see a platinum-cased Hamilton watch it's a "franken" - or a Hamilton movement in a private jewelers case.  However, there are a small handful of legitimate platinum models.  One of which is the Rutledge. 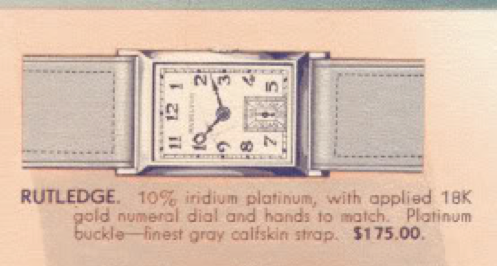 The Rutledge was introduced in 1935.  It's not the first platinum model, there were earlier models like the Oval where a tiny number of watches were cased in platinum.  But I do believe the Rutledge was the first catalogued model to be only available in Platinum.  Considering the model was released in the depths of the Great Depression, this was not an inexpensive watch.  It was about twice the cost of other solid gold models.

One little bit of trivia is the Rutledge originally came with a platinum buckle to match but as the Depression wore on, Hamilton changed the buckle to white gold and offered platinum as an option for added cost.

The Rutledge continued to be offered through 1951, when a new platinum model called the Cambridge was introduced and produced through 1953.

The case of the Rutledge is alloyed with iridium to give it additional hardness.  The silver dial has rhodium plated solid 18 gold numerals with matching hands in the "spear" style.

As I said above, a friend of mine recently purchased a Rutledge and he asked me to check it out for him.

As received, it came presented on an expansion bracelet - which would not be correct for a watch of this caliber.  It turns out, one of the most challenging things of a Rutledge is to locate a 19mm (or 3/4") strap in gray... try doing that sometime!

Of course, the second most challenging thing is to get female spring bars to accommodate the strap - as this case has little pins in the lugs as opposed to holes to receive the spring bar.   The spring bars are actually open tubes on the end and they are very hard to locate in a big enough size. 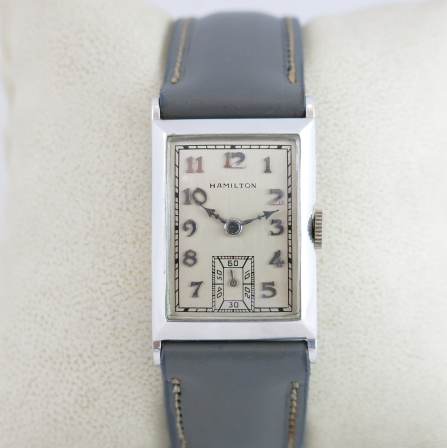 As you can see, this watch is in fantastic shape.  It even still featured the brush marks on the case back that you rarely see with previously worn watches. 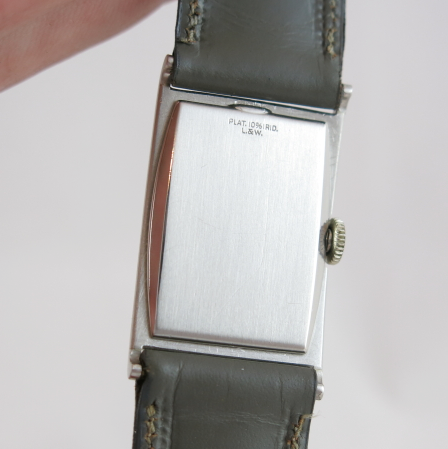 The Rutledge, like all precious metal-cased Hamiltons with a 14/0 movement got the 19 jewel 982 until 1940 and after that was outfitted with the 982M medallion movement.  This movement needed a little tweaking to the regulator to slow it down a smidge but otherwise it looks and runs clean.  Based on the serial number, this watch is a 1937 model. 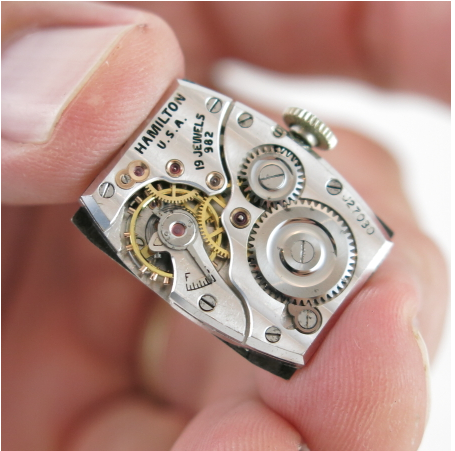 It was a real treat to see this watch as I'm not likely to lay hands on another one anytime soon.  But that's okay - once is enough.
Posted by HandyDan at 4:35 PM