Hamilton first introduced men's wrist watches a little over 100 years ago.  Their marketing department must have been comprised of engineers as they named their first models with exotic names like Cushion, Square, Rectangular and other shapes.  That lasted for about ten years and you could pretty much name the models on two hands.

One of the models that was advertised but not shown in the catalogs was the Oval.  You can see it in the advertisement below along with the "Square Cut Corner". 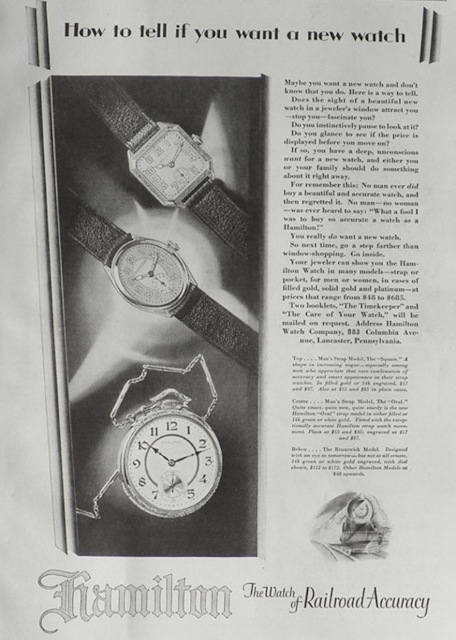 The Oval came in solid green and white gold as well as in gold filled.  About 400 where made in solid white gold and 200, or so, in solid green gold.  Like the other shaped models, there are versions with engraved bezels and plain.
1,876 Plain Ovals were made in white gold filled and about the same were made with Engraved bezels.  Half as many (791 / 797) were made in green gold filled.
My project watch is a very nice restored example.  The only thing that I don't like about it is the military-style crown.  It would look great on a military Keystone case from WWII but not so much on this watch.  Of course, opinions are like belly buttons - everyone has one.  So what do you think of the crown? 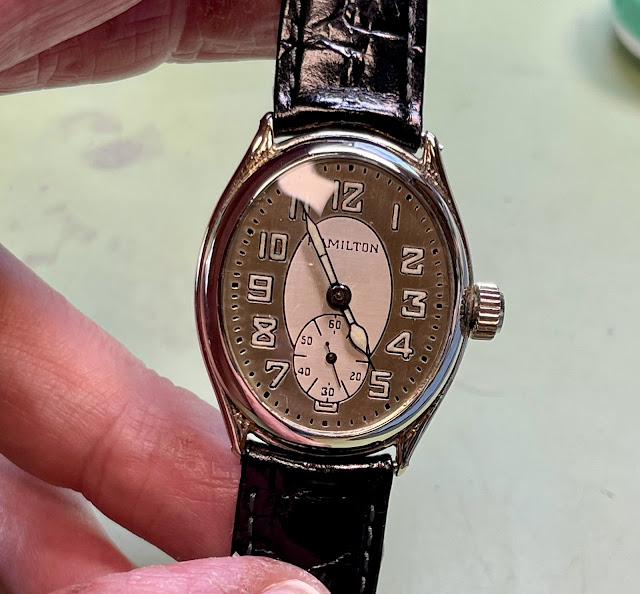 I've been getting more and more reticent with Hamilton's early movements.  They were extremely well-made but they are extremely unforgiving.  Plus, they tend to have the most mileage and could have years of neglected use.
I normally don't test a project watch as I assume it will run better after a service.  I did wind this one a little though and put it on the timer.  It appears to run slow and has a large beat error.  I didn't wind it fully so that could be a factor, but at least it appears to work. 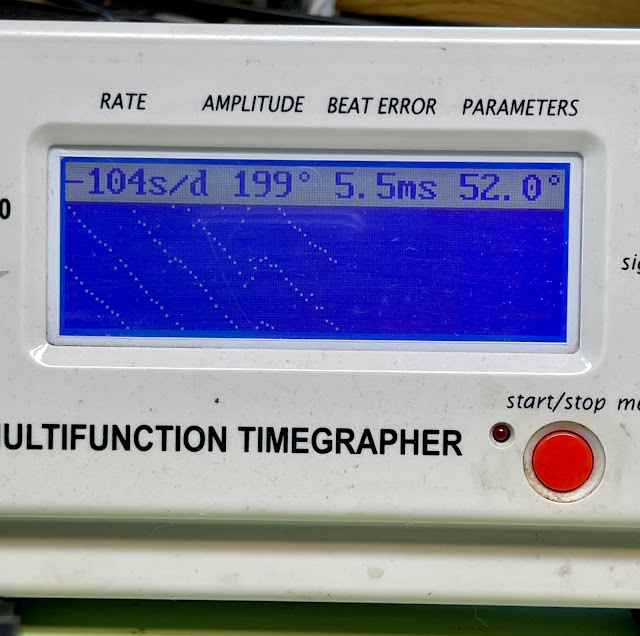 The case back has been brushed.  Sometimes this is a way to hide or remove an engraving.  Other times its simply a way to make a case look clean and well maintained.  You can see the case back has had a repair of some sort. 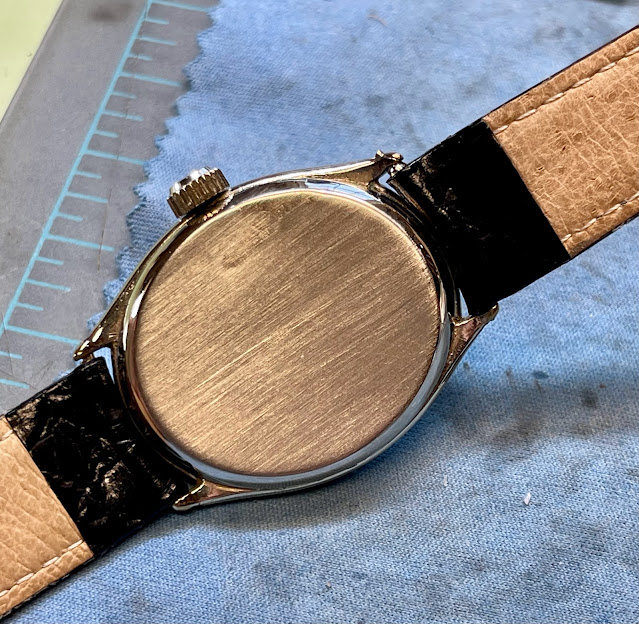 The lugs on the Oval are long but not long enough to use straight spring bars.  So it's not unusual for the lugs to wear out and it looks like these lugs have had some work done at some point over the years but it was done well and looks good.
The movement is loose in the case.  It's held inside the three piece case by the stem and two case screws. 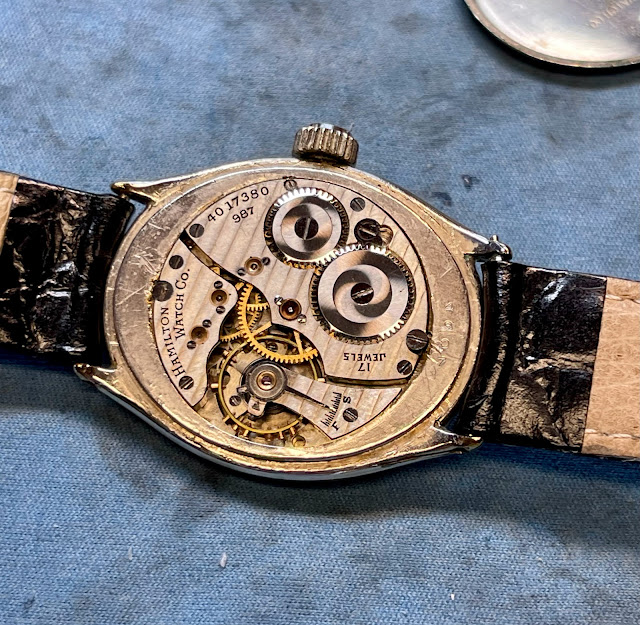 One of the case screws is loose - so loose that it's almost backed all the way out. 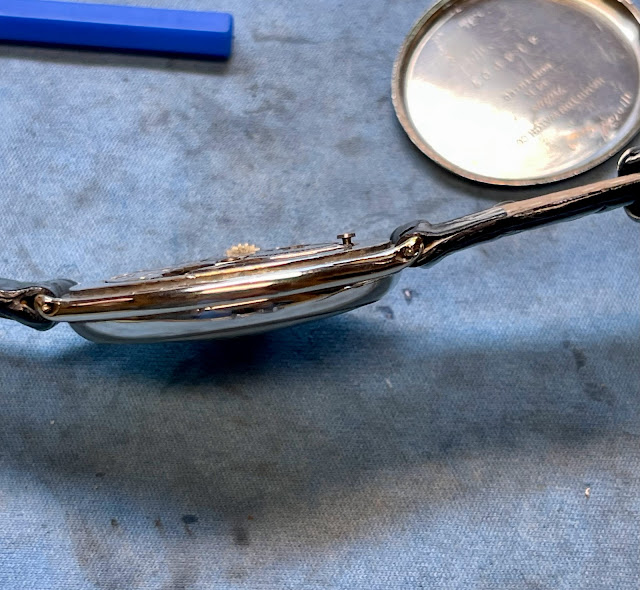 With the bezel lifted out of the way you can see the dial and hands have been refinished.  This is an engraved dial with a two-tone brushed finish so it reflects the light differently in the center section vs the hour track.  The engraving allows a perfect refinish. One little bit of trivia about movements from this time is the screw for the balance cock is slightly different than the screws for the other bridges.  You can see the balance cock screw at the top of the arrangement. 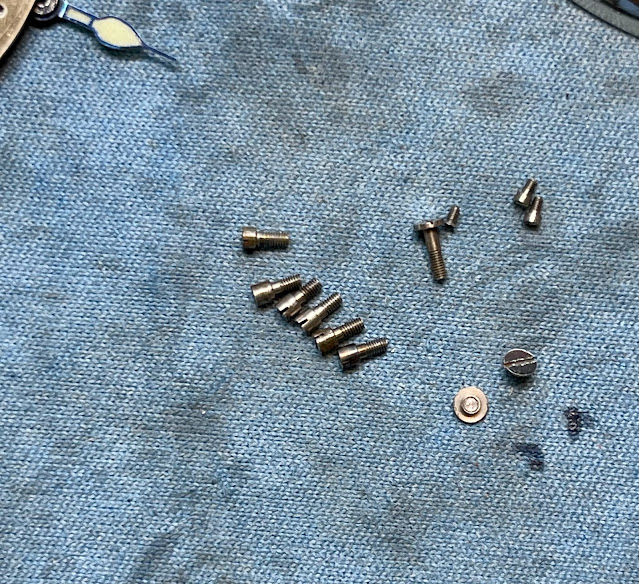 The mainspring inside the barrel is an old blue steel design.  I'm 99% confident it will be "set" or maintain a tight coil once it's removed. 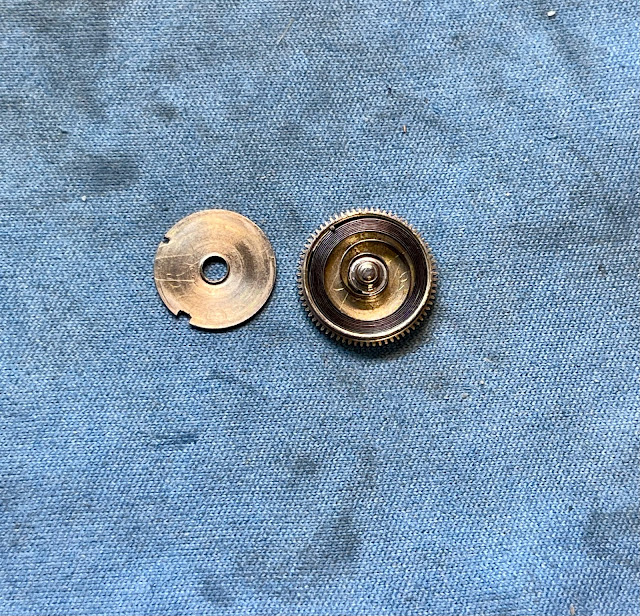 Yup - called it.  This spring would power the watch but for no longer than 24 hours - if that much. 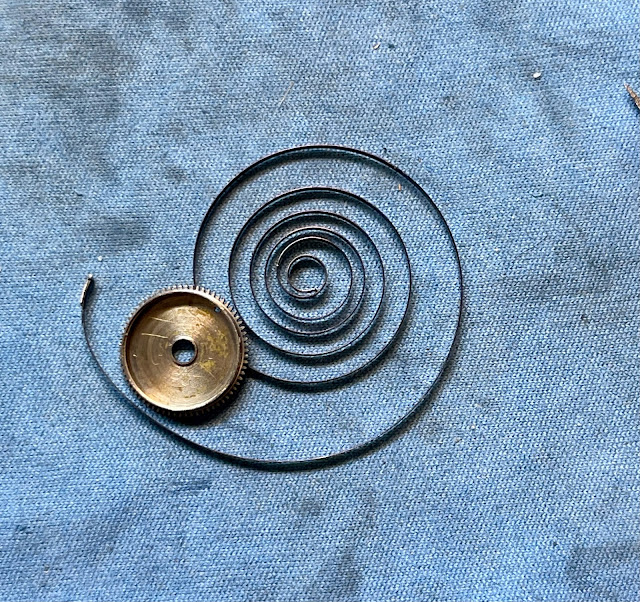 When it comes to replacement, there are a few options.  I use Dynavar mainsprings whenever I can, otherwise I use modern white alloy replacements.  Springs can come in different strengths so I try to stick to the middle.  I'll go with the 90 strength on this watch. 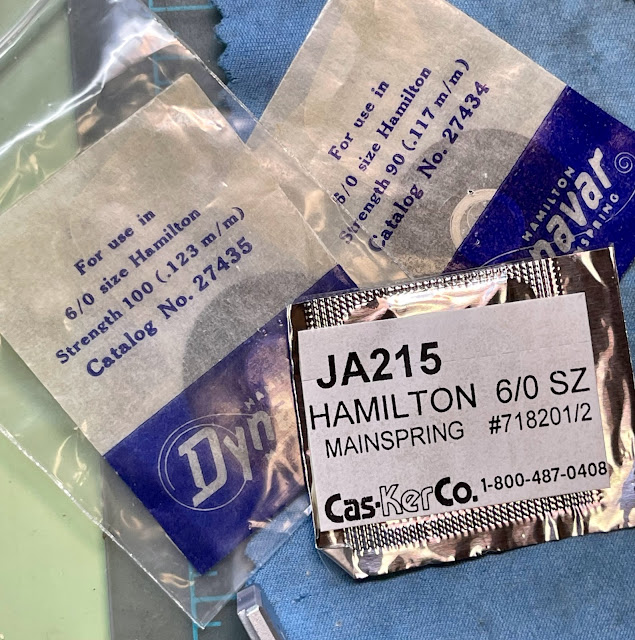 Here's a comparison of new vs old.  A new mainspring will start to coil in the opposite direction, almost like an S.  This will power the watch for 35 hour or more. 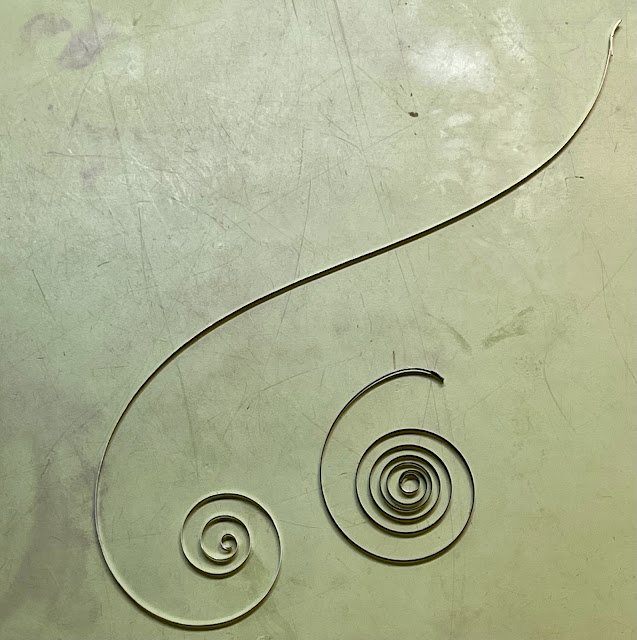 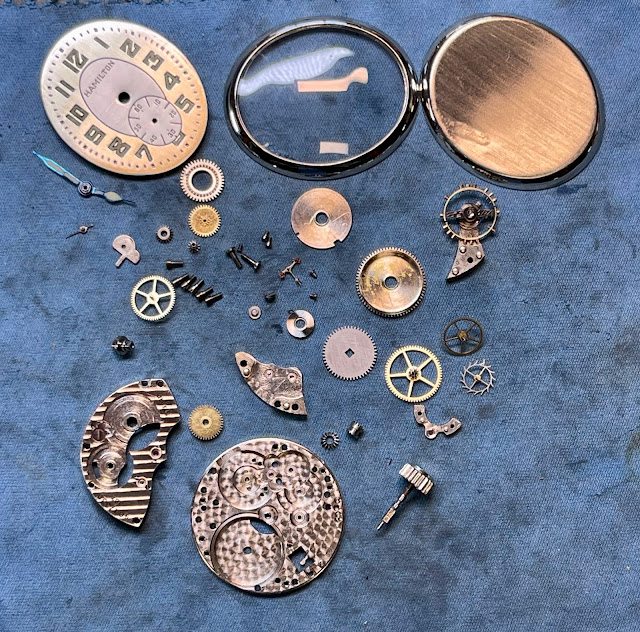 The movement is reassembled and ready to go to the timer. 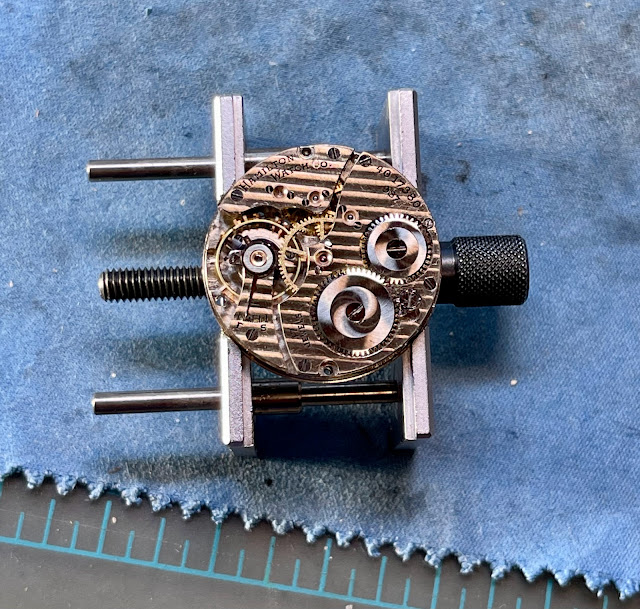 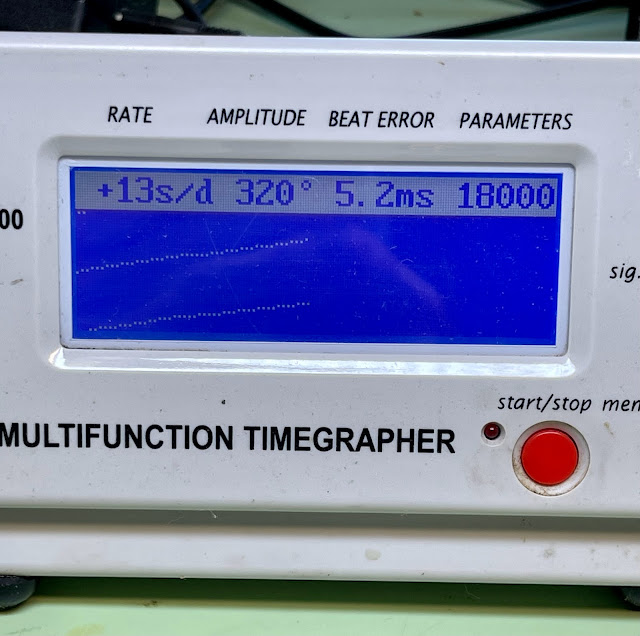 Somewhere between Bacon Hollow and Simmons Gap my cries of anguish are still echoing in the stratosphere.  Look at this hairspring!!!   As Charlie Brown would say, "AAUGH!"  I'm not exactly sure how it happened but the stud got caught on the balance cock and the balance fell out. 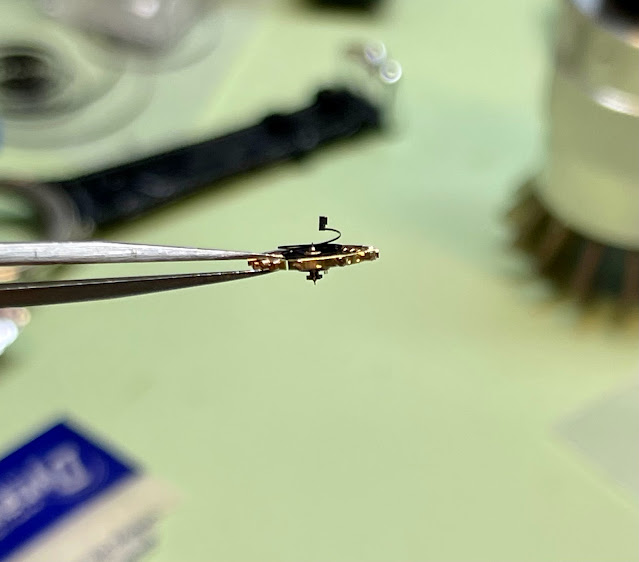 Someday I'll get better at tweaking hairsprings but this one is beyond my skills.  So a 1932 Webster project watch from my personal stash will need to donate it's prospects to save this Oval.  It's a worth cause.
My replacement balance runs well and the beat error is within my specs.  I'm still heartbroken that I damaged the balance but it happens with these older movements.  They are very unforgiving. 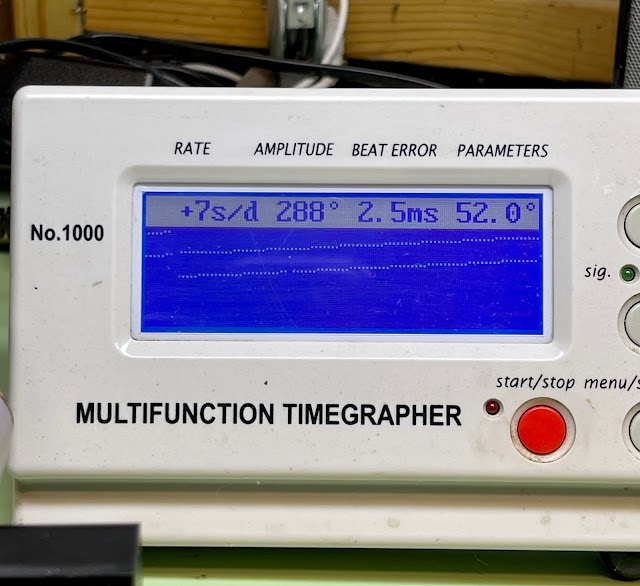 I found a better crown and I think it's a perfect replacement for this fine watch.  It look 100% better than the previous crown.  What do you think? 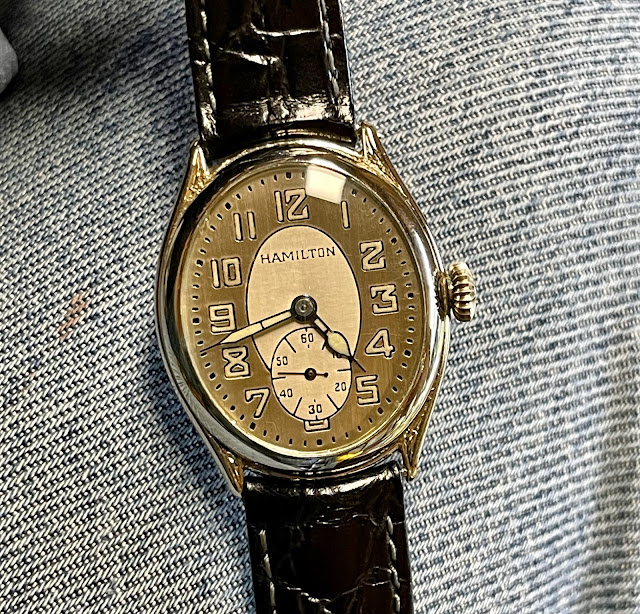