Watches got more complicated in the 1950s, literally and figuratively.  A basic watch had two hands, an hour and a minute hand and this first complication is a second hand.  From there you can add a lot of complications like an alarm, a chime, a calendar, a day of the week, a selfwinding mechanism, a stopwatch, etc. etc..

Watches with lots of complications are very common today but early in the 20th century just telling the correct time was the mark of a fine watch.

In 1953 Hamilton introduced it's first automatic and it did so by reintroducing the lllinois brand name.  In 1954 the first Hamilton-branded automatics hit the scene.  Hamilton also introduced date complications around the same time period.

By the 1960s calendar models and automatics were staples of the Hamilton lineup.  Chronographs came later in the 1960s and by the 1970s watches could also keep track of the day of the week.

One of the first Thin-o-matic models to feature a calendar complication was the T-575.  It was only made for two years. 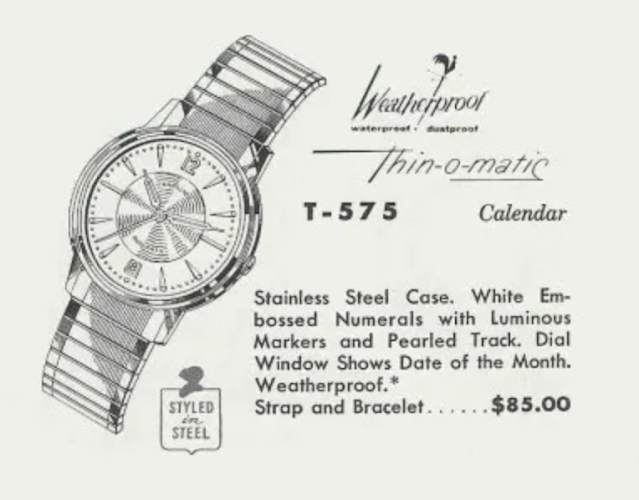 The T-575 came in a stainless steel case and with a two-tone textured dial.  The date window is at the 6 position.  As a member of the Thin-o-matic line, it featured a Swiss-made micro rotor movement made by Bure, a company that Hamilton would eventually purchase.
My T-575 project watch arrived in very nice condition but it had been a while since it was last serviced and that's important to do regularly as a watch that looks nice and even runs well, could have no remaining oil or lubrication inside after 3-5 years. 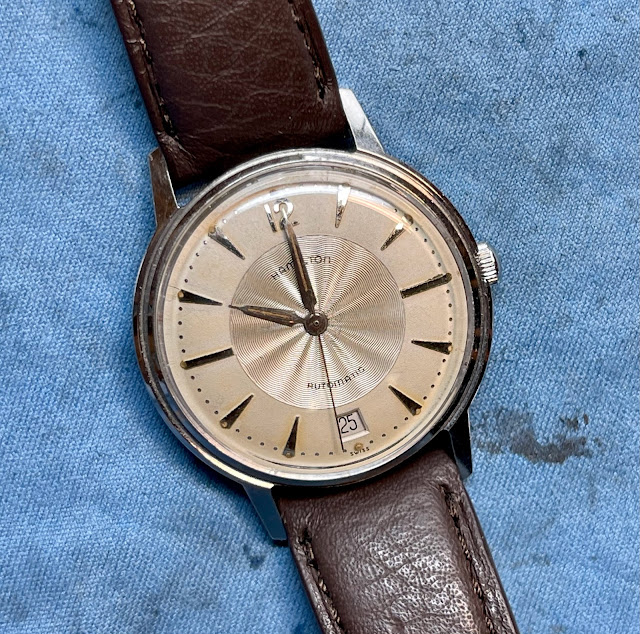 Looking closely at the case back I can see a lip between the lugs so this is a two piece case and the back should pop off. 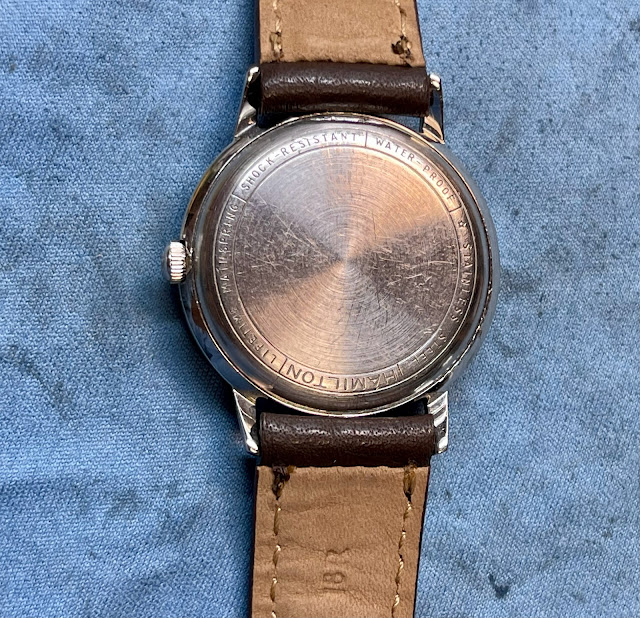 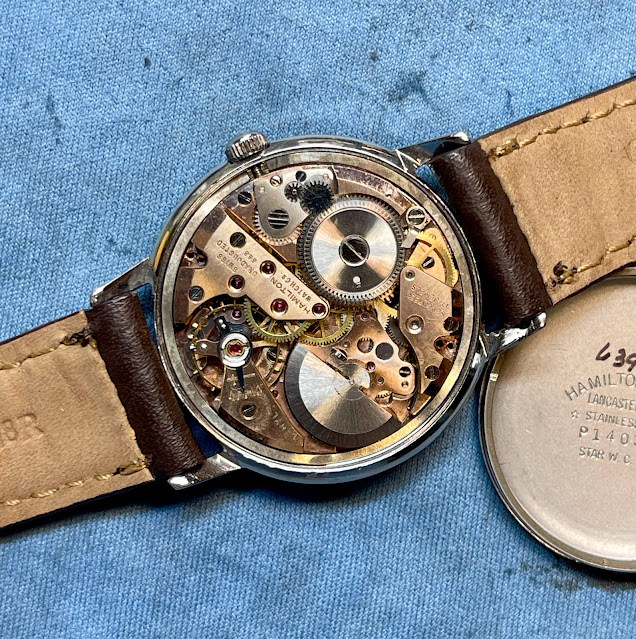 Two small screws on the side of the main plate secure the dial and even though I loosened them the dial would not come off.  I looked closely and saw that one of the dial feet was missing so that meant some sort of adhesive was used to secure the dial.
Sure enough, two small adhesive blocks held the dial on the main plate.  That's not unusual but  you don't see that very often either. 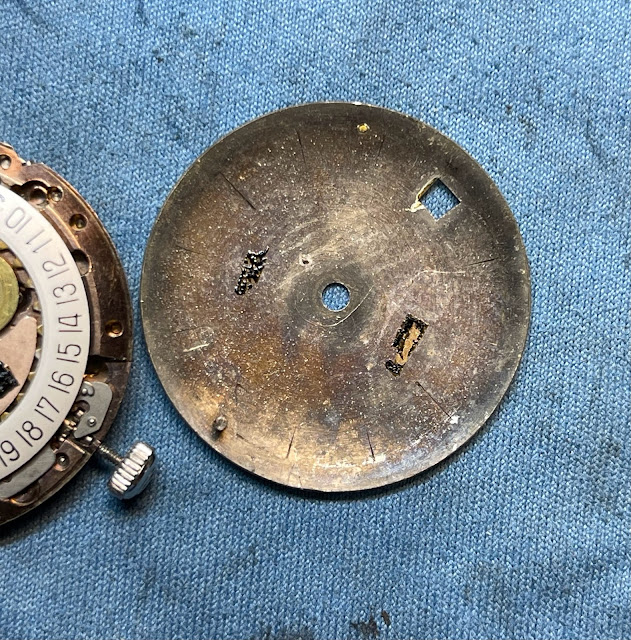 The adhesive is clearly attached to the movement and one of the screws that secures the date complications is covered.  So I'll have to pick the adhesive off the plate to get to the screw. 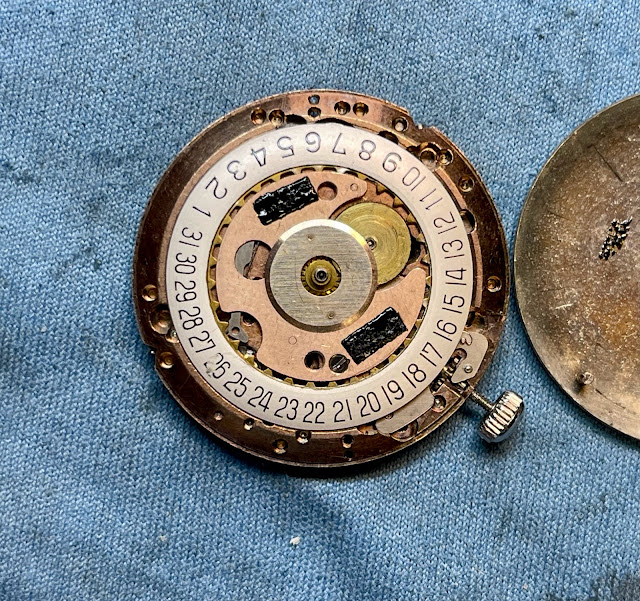 There... I'll do the same to the other adhesive block and use fresh "dial dots" when it's time for reassembly. 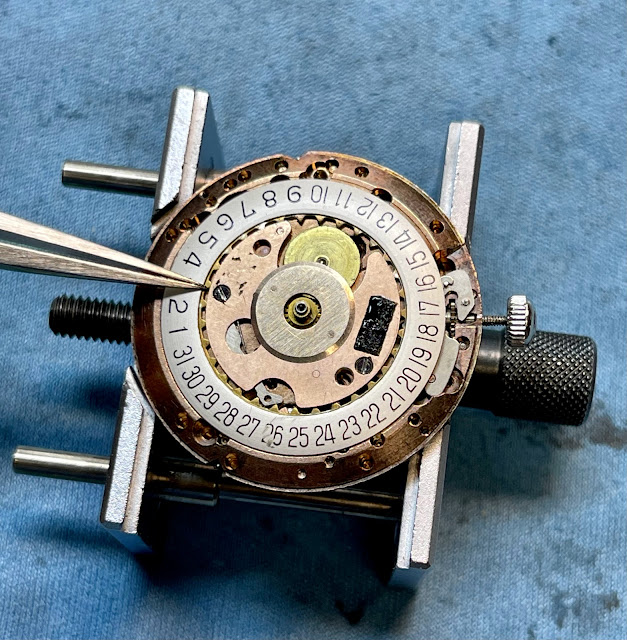 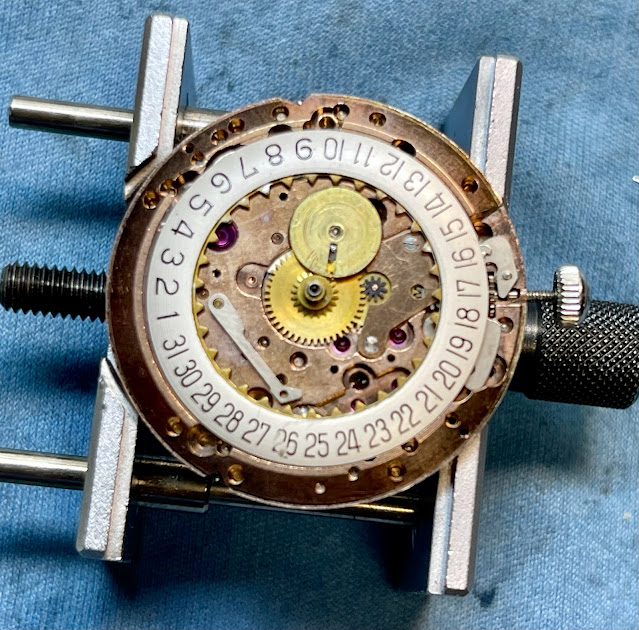 The J-shaped spring will fit into the slot on the bridge when it get reassembled. 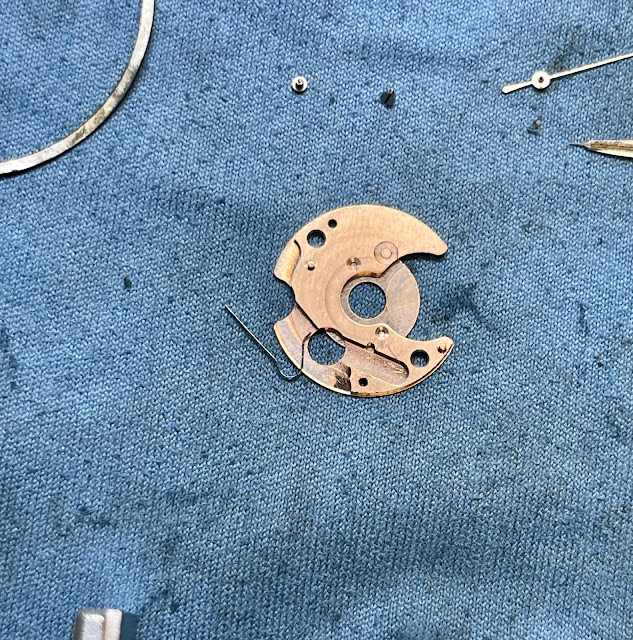 Piece by piece the front of the main plate is stripped of parts. 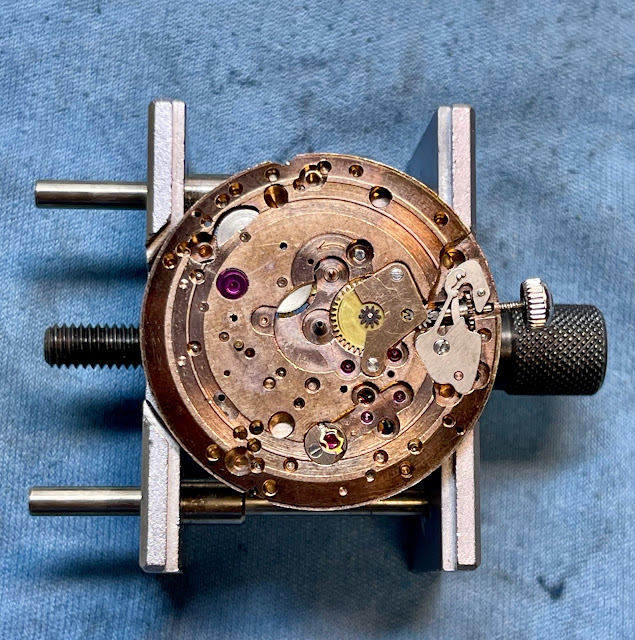 Now for the back of the movement.  The first thing off is the balance and you can see this movement is based on Buren 1001, as evidenced by the stamp, although it's hard to see in my photo. 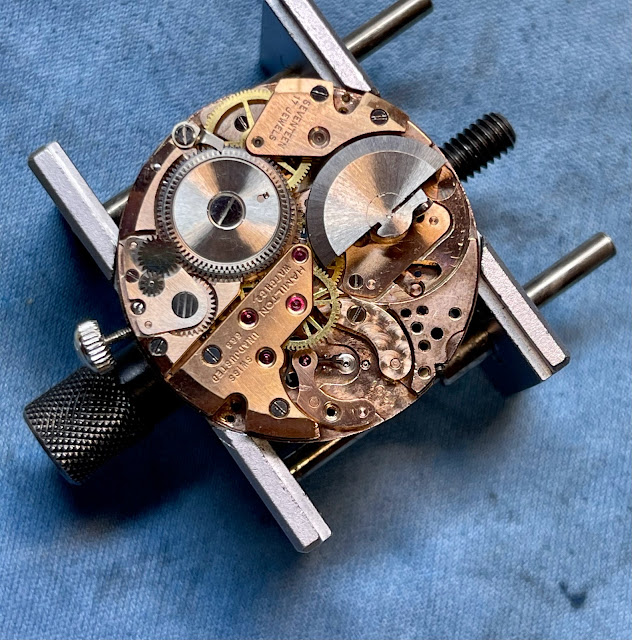 Great care is taken to remove and inspect each part and I take special note of what goes where so I can put it back together again. 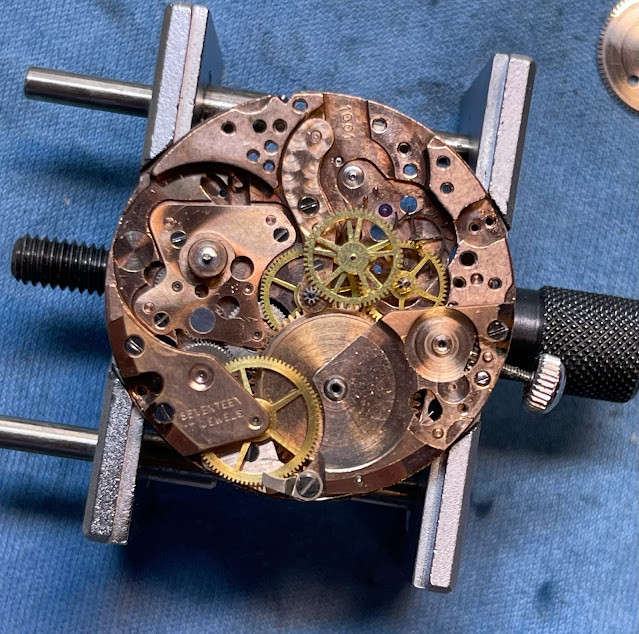 Almost there, just a few more parts to go and the movement will be fully disassembled. 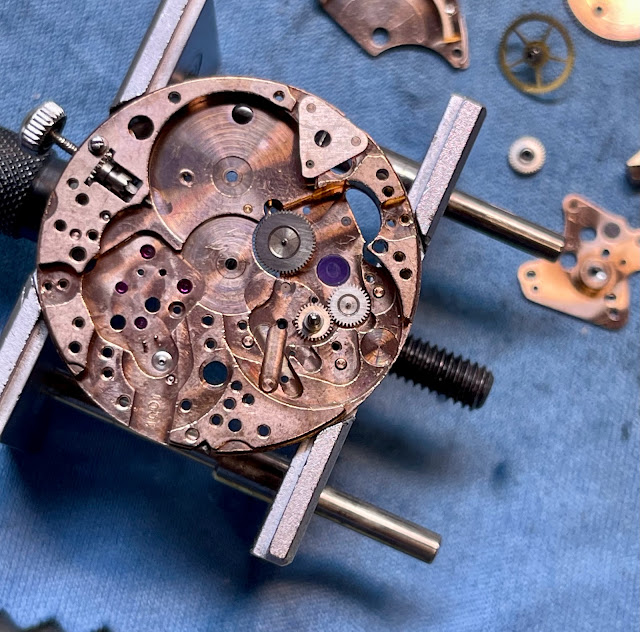 Finally it's all taken apart and my goal now is to clean everything and to put it all back together with no extra parts left over. 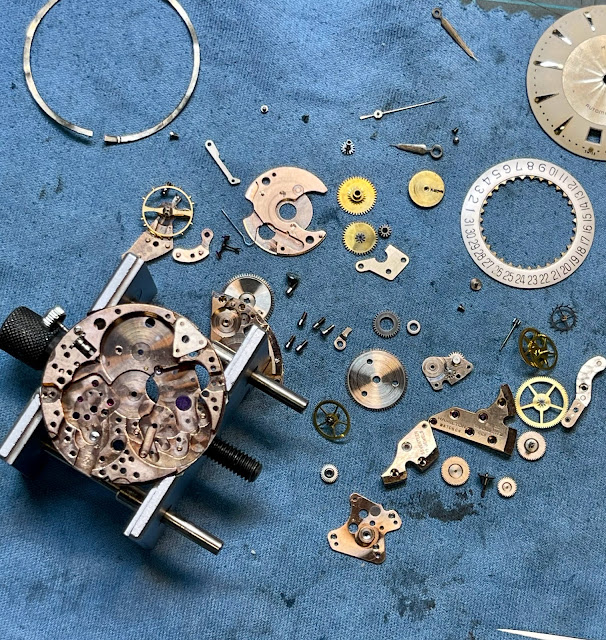 Everything is cleaned and dried.  It looks noticeably shinier now even though it looked good before. 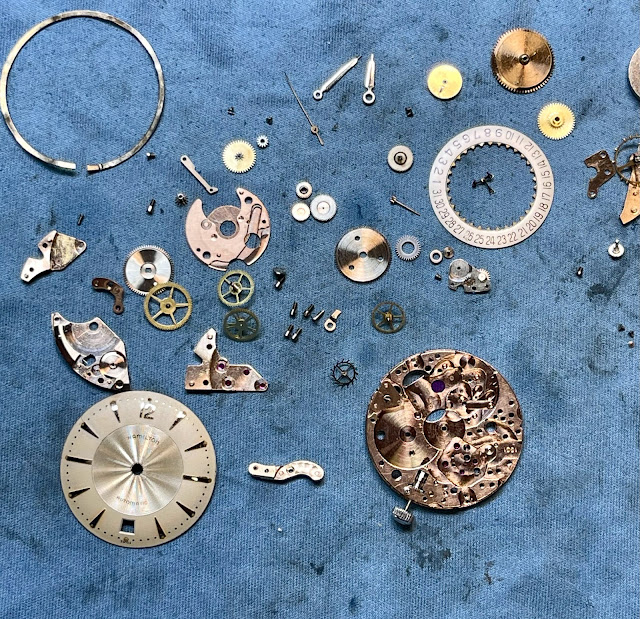 The main parts of the movement are back in place and it's ticking away with a good motion.  Time to let the timer give it a listen. 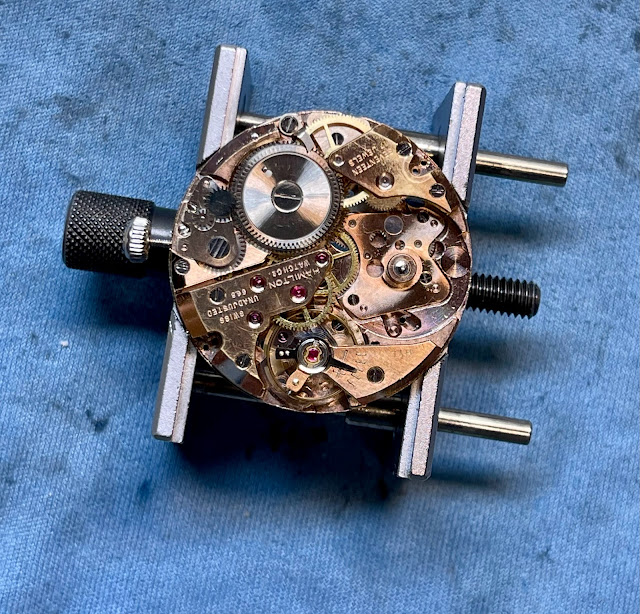 No complaints here.  Now I can put the rest of it together. 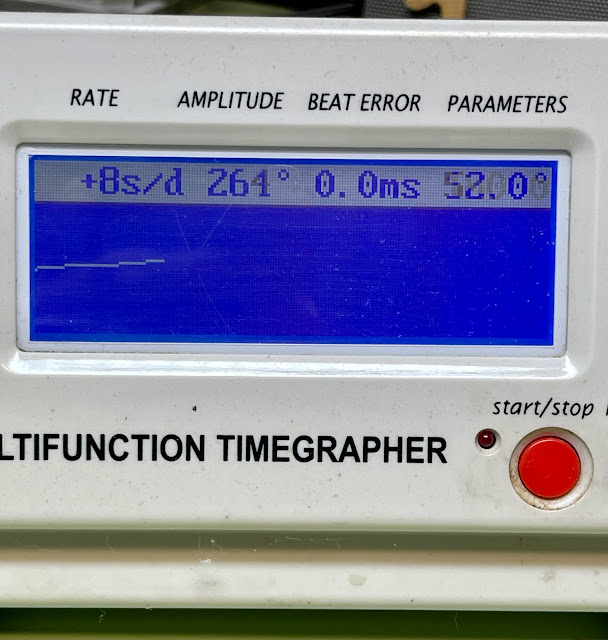 It took a while but I eventually found my stash of dial dots.  These are tiny round sections of double-sided tape.  You apply one side to the mainplate and then remove the cover from the dot to expose the other sticky side. 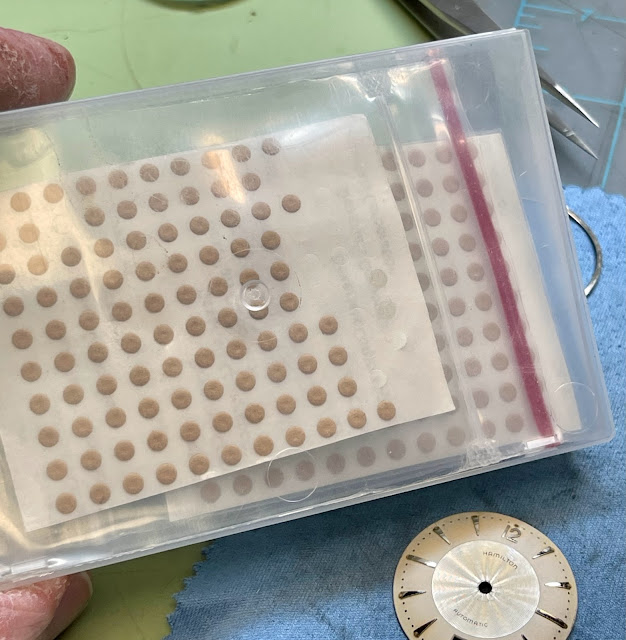 I'll use two dots in the same positions as was used before. 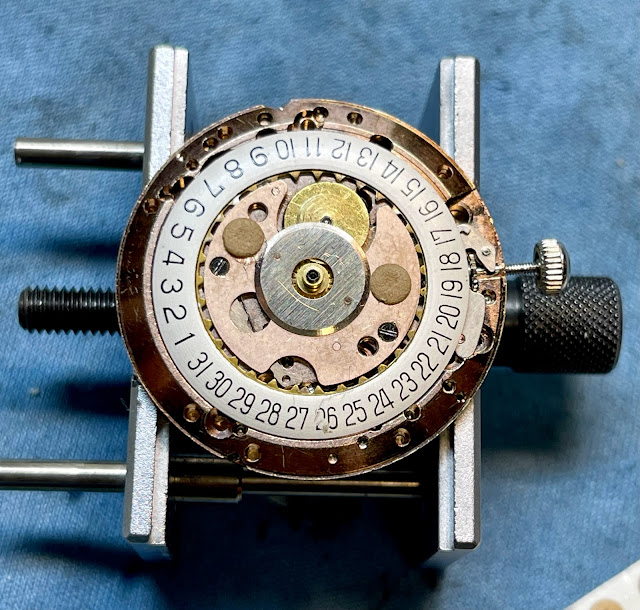 The covers are off and now the clear sticky dots are ready to be pressed into the dial.  I also use the remaining dial foot screw to keep the dial in place. 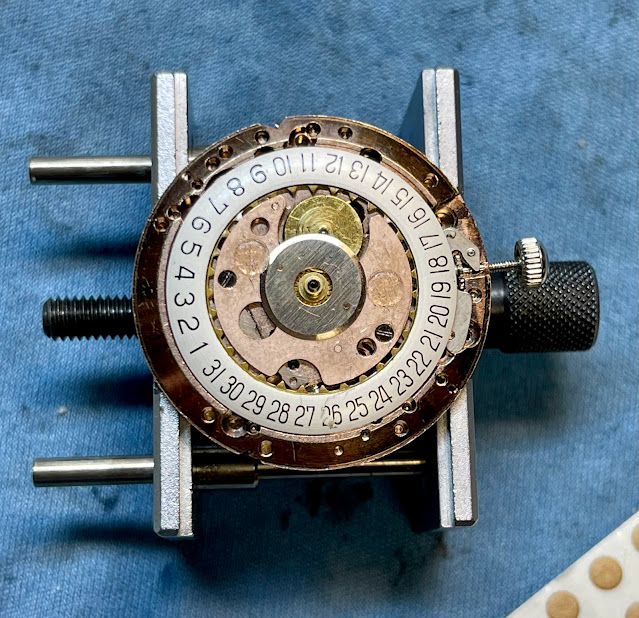 Voila!  The finished project looks as great as it runs.  I replaced the crystal as well since the original crystal had a defect on the inside.  Now it's perfect. 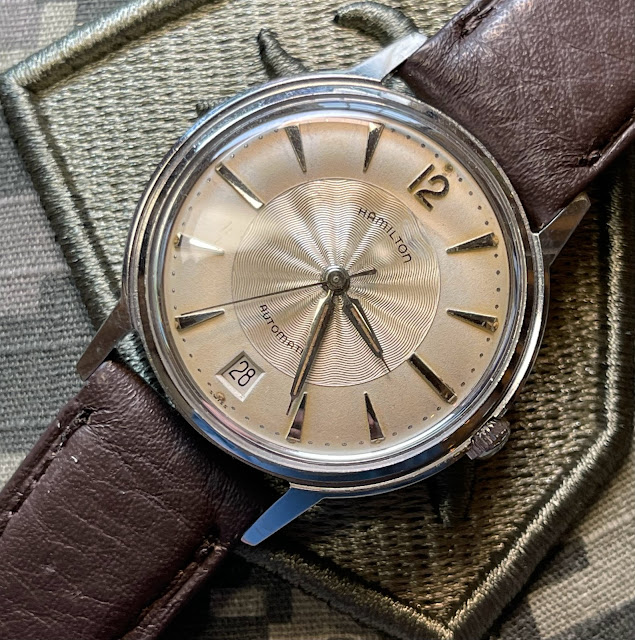