It's not unusual to come across Hamilton watches that were intended for markets outside the US.  One clue is you can't find them in the Hamilton catalogs.  Another could be markings on the watch itself.  Some models were both, like the 1964 Dateline A-578.  It's part of the Estoril line and there are several variants that were marketed outside the US. 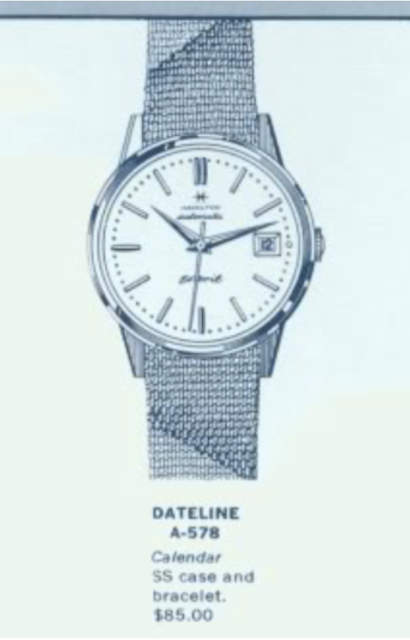 Estoril is a seaside region in Portugal - considered the Portuguese Riviera.  The Dateline A-578 was marketed in the US but additional versions in solid gold and gold electroplate were also offered outside the US.

The ads I found online show there are a couple of potential original bracelet designs and it's interesting to note that the font used for Estoril on the dial can vary - presumably by year or market. 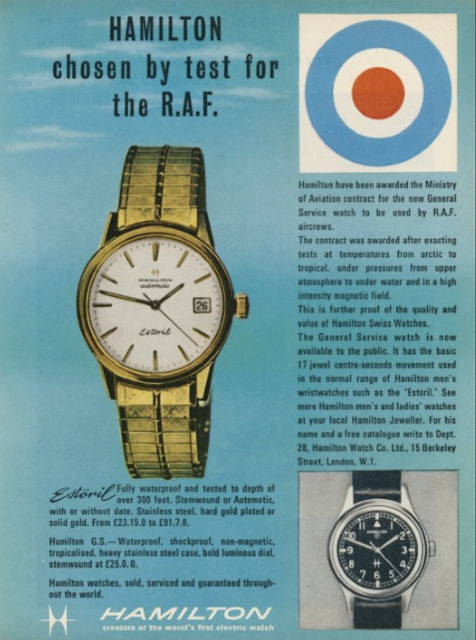 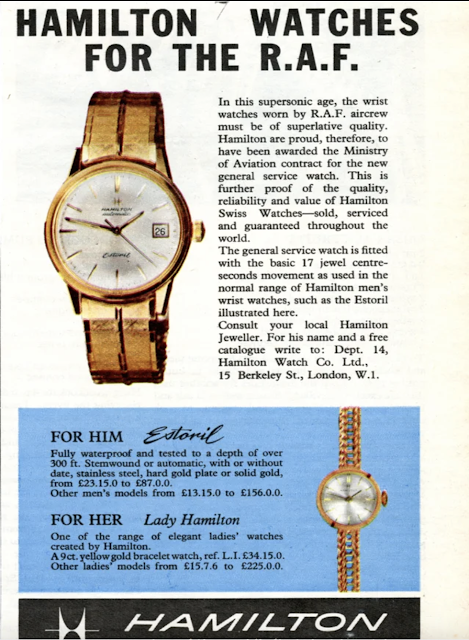 The Dateline A-578 is a dive watch, or at least intended to be capable of going to a depth of 300ft, as evidenced by the 300 on the back of the case.
The A-578 is outfitted with the 17 jewel 694A movement but sometimes you'll find Estoril models with a 64 caliber with 21 jewels.  The movements are the same other than the 64 has four additional jewels in the automatic framework.  However, if you come across a caliber 64 it's a good sign that it was marketed outside the US.
My project watch arrived in good condition and it's interesting to note the style of the hands aligns with the European advertisements but the Estoril logo is different than both the US and European ads.  So models could vary.  The bracelet is from Speidel and is not original to the watch. 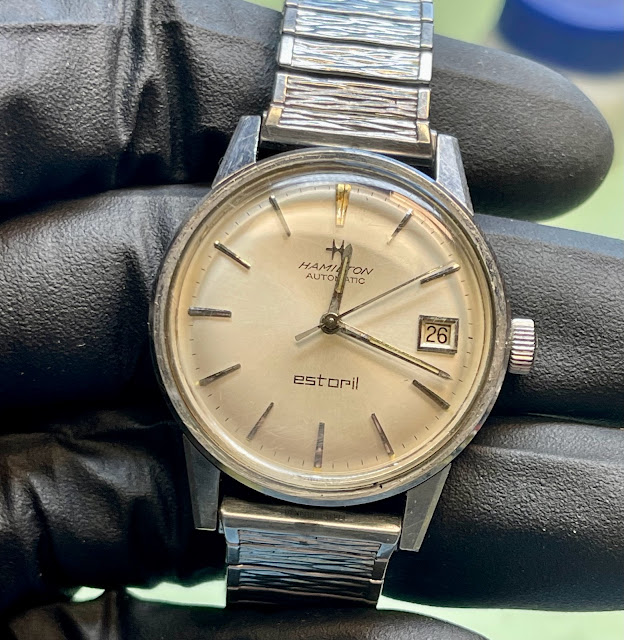 The case has three parts... a back, a center and a bezel that surrounds the crystal.  Presumably it all fits together tightly, in order to be so water-tight.  After almost 60 years you should consider any vintage watch no longer waterproof - unless you are interested in costly repairs. 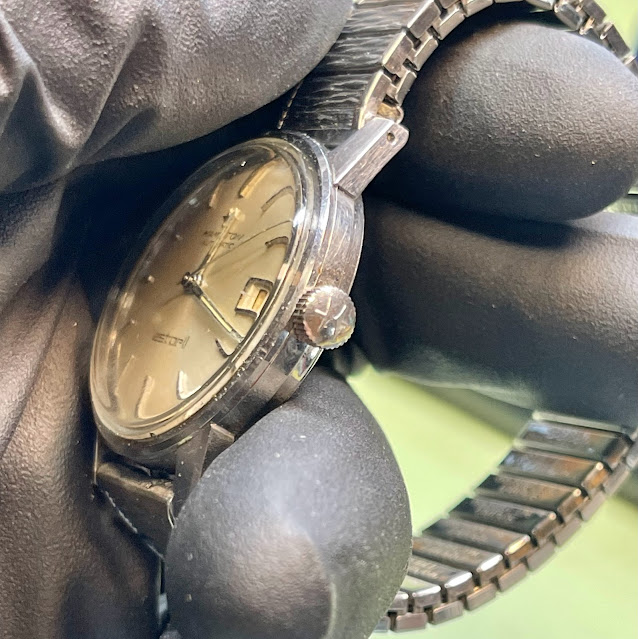 This model is also identified by the model number 64003-3.  The 64 represents the caliber inside (the 694A is based on the caliber 64) and the -3 represents stainless steel.  Presumably the solid gold version would be 64003-1. 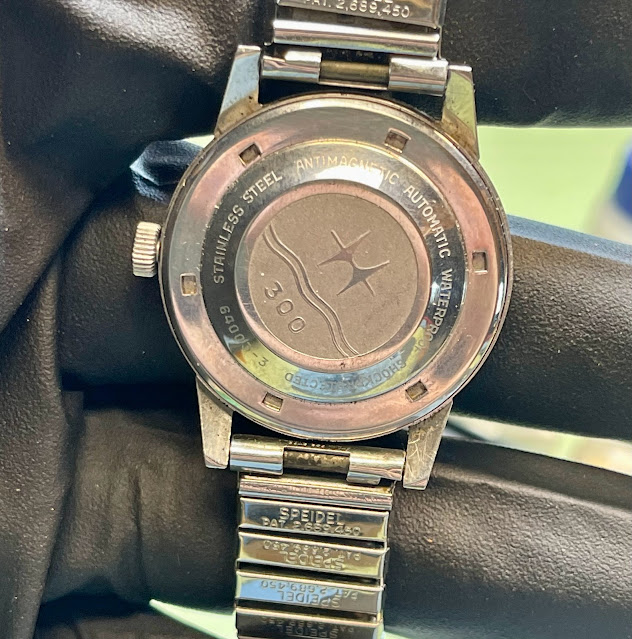 Opening cases like this can be the first challenge and having appropriate tools for the job is important.  Quality counts too here, and inexpensive tools can produce disappointing results.  I use a Bergeon case opener and a Bergeon case vise to hold the case while I turn the opener. 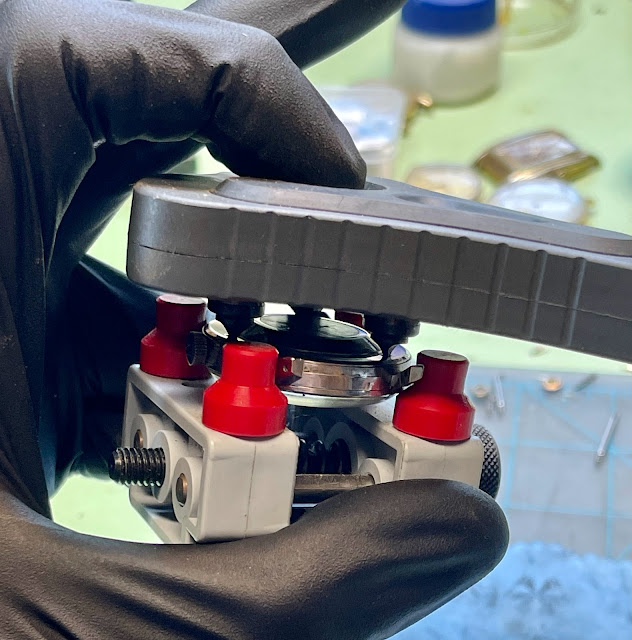 Success!  The first step is complete and reveals a nicely preserved movement inside.  There are no signs of rust or water penetration. 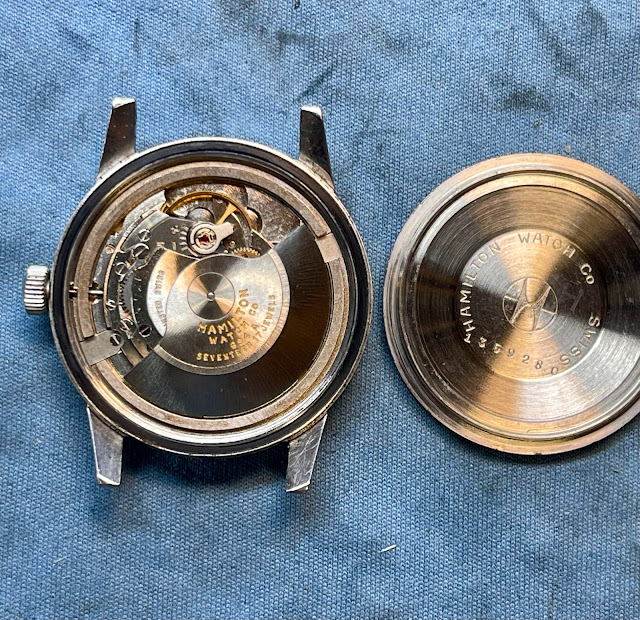 Getting the movement out of the watch and the dial off is the next stop.  In this photo you can see the typical date complication that is triggered once a day, and a midnight, assuming you put the hands in the proper position. 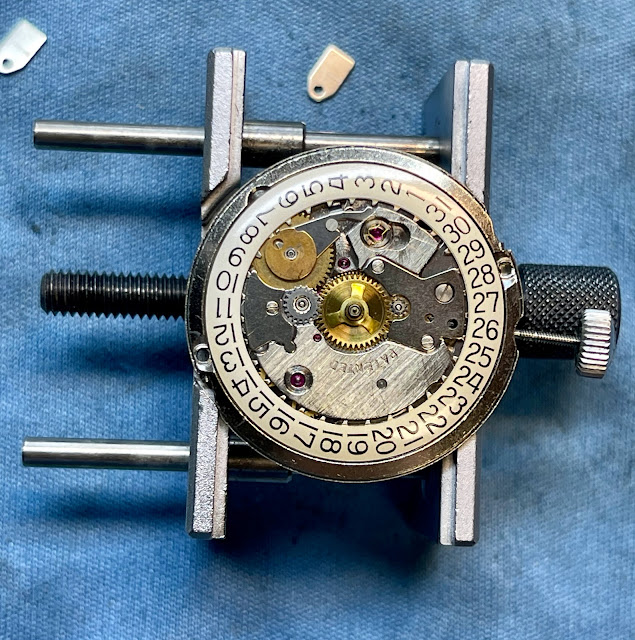 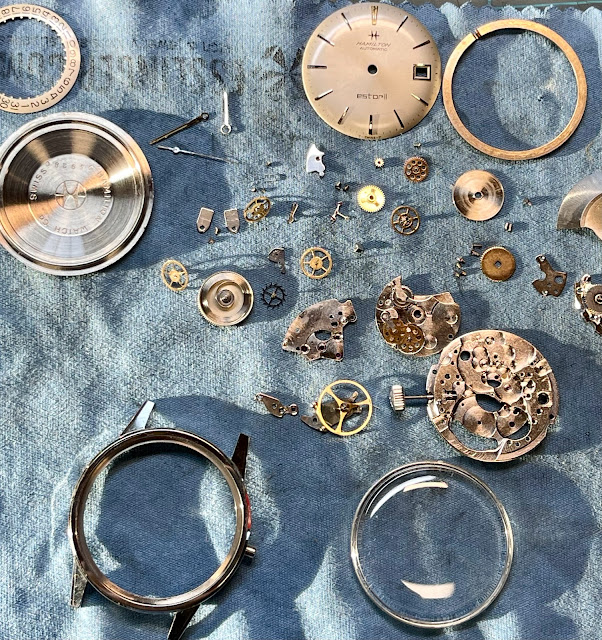 The basic movement is completed first and it's now ticking with a good motion.  Next I'll see what the timer thinks of the beat rate. 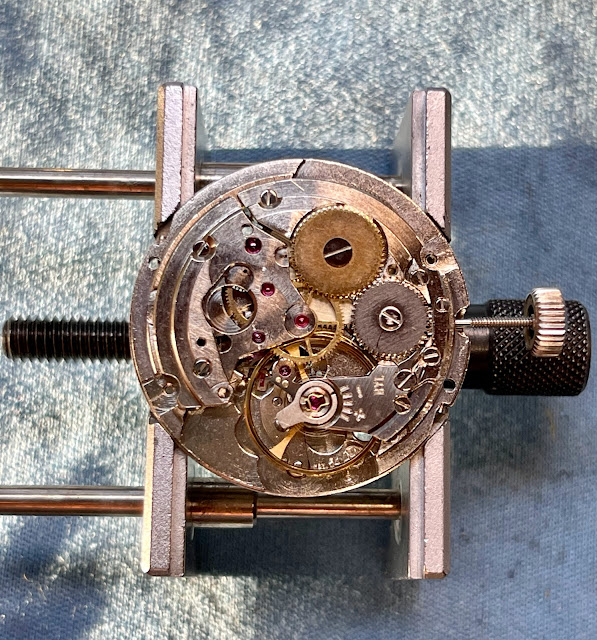 It's running a little slow and the beat error is a little high at 2.8ms but I can easily adjust both. 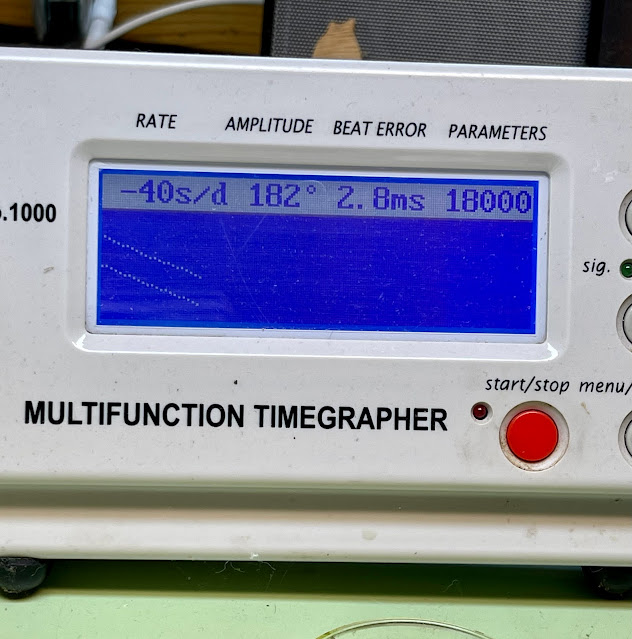 There... now it's running 18 seconds fast per day with a respectable 0.3ms beat error.  A lower beat error also brought the amplitude over 200 and it will probably go up further as I continue to wind it. 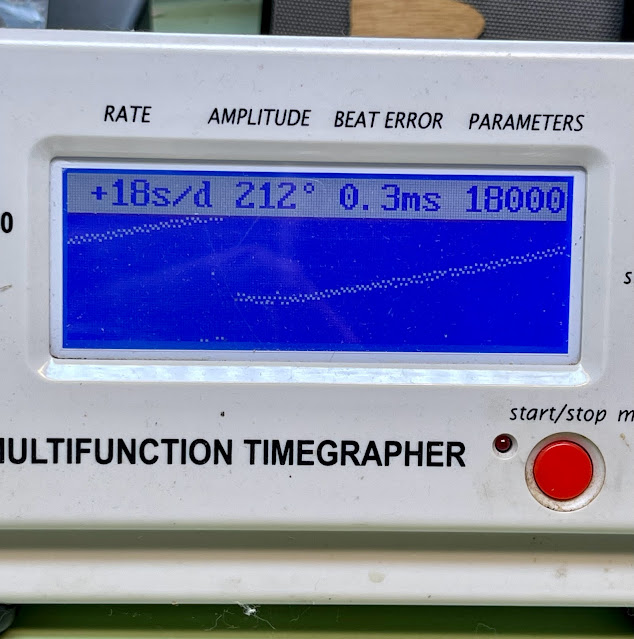 All the parts go back onto the front next, including the little spring that helps index the calendar wheel.  I have adopted the habit of putting a clear drop cloth over my head when install that spring - as it tends to disappear occasionally and the drop cloth helps narrow the search area when it vanishes. 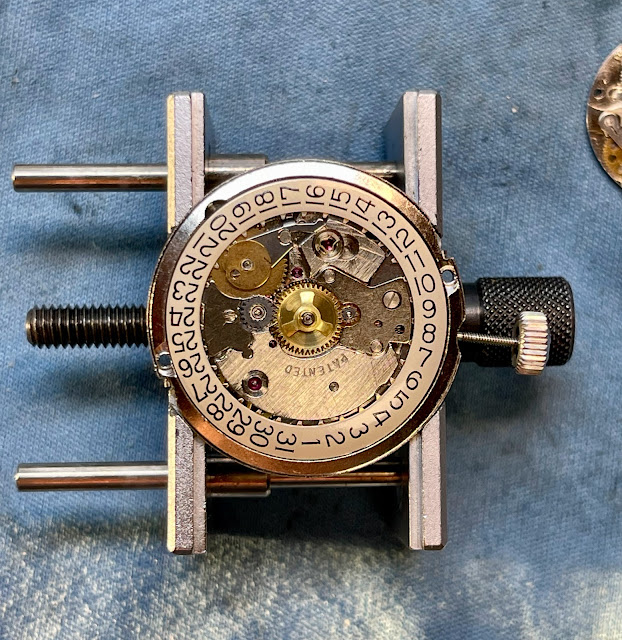 The finished watch is back together and I paired it with a very comfortable and casual leather strap.  It now runs as good as it looks and it looks great! 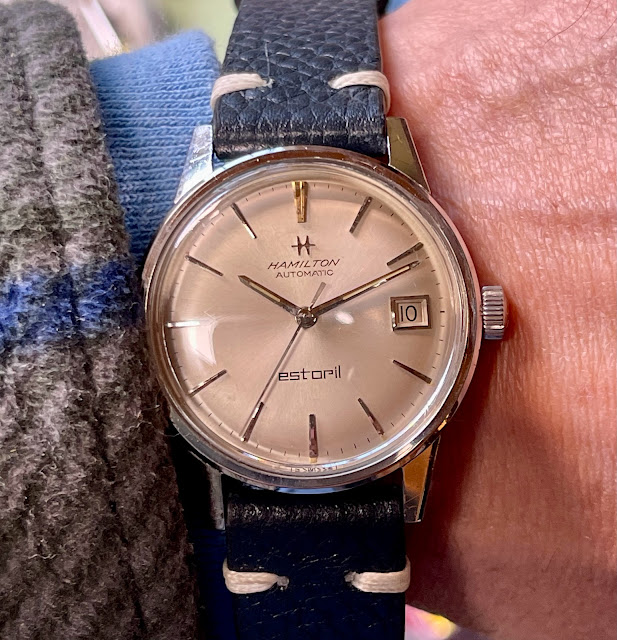