I recently picked up an interesting project watch.  It's a non-running, Automatic K-451. 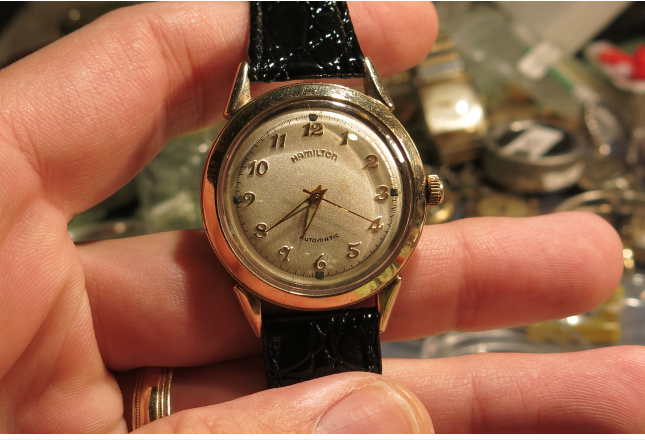 The dial is embossed with numerals as well as the Hamilton name.  I believe my dial may be refinished, as the black squares at 12, 3, 6 and 9 don't look like they were printed very well.  Perhaps they're supposed to be dots for luminous material, as the hands are lumed but nothing else is.

The two piece case has a 10K gold filled bezel with a screw on stainless steel back.  K-451 and the usual Hamilton logo, etc. is marked inside - so there's no doubt this is an authentic model.

Behind the dial is a 17 jewel Hamilton 661 automatic movement.

As received, this watch was dead on arrival.  I knew it wasn't working when I bought it so I took a little bit of a chance that all it was going to need was a cleaning.  I was glad to see that the balance staff was not broken.  Most movements from the late 1950's on are "shock jeweled" to protect delicate pivots from accidental breakage.  This watch's main problem was it was really, really dirty with a lot of rust inside too. 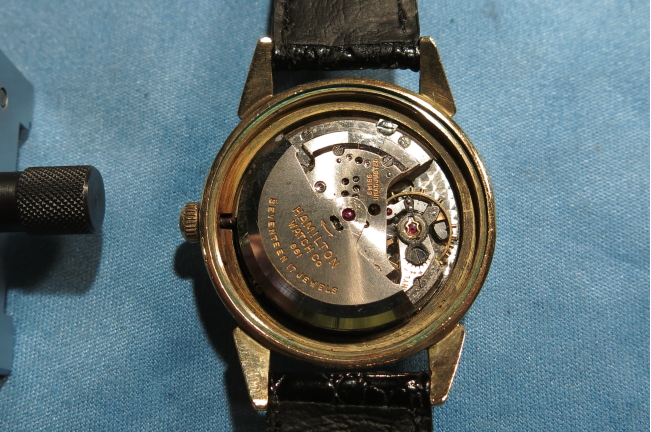 Here's a shot of the stem.  It needs to be removed in order to get the movement out of the case.  I have spare stems but I don't have a spare crown so I will leave this stem as is and hope with cleaning and lubrication it will still be sound. 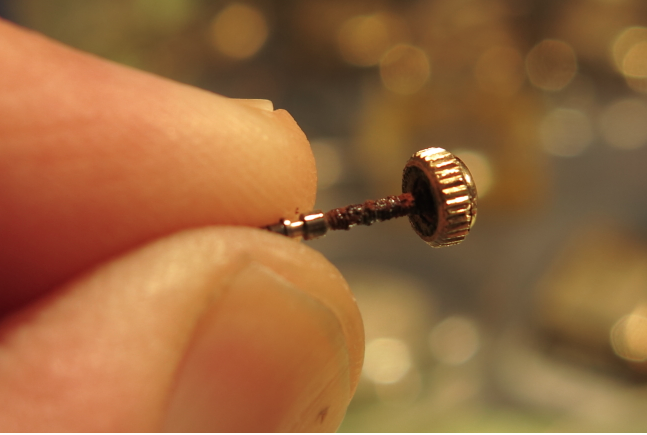 With the stem removed there are two case screws that need to be removed in order to get the movement out through the back.  You can see the first one in the shot below along the circumference of the movement.  The other is on the opposite side and is not visible as it's under the rotor. 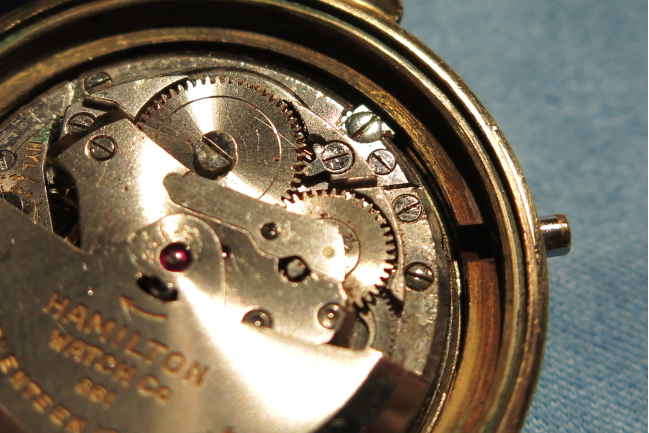 With the movement out of the case and in the movement holder, I can now pull the hands and the dial.  The dial is pretty dirty (like the rest of the watch) and it has some white spots.  I'll try to clean it - but I don't want to lose the printing.   Refinished dials can be very susceptible to printing loss when cleaned. 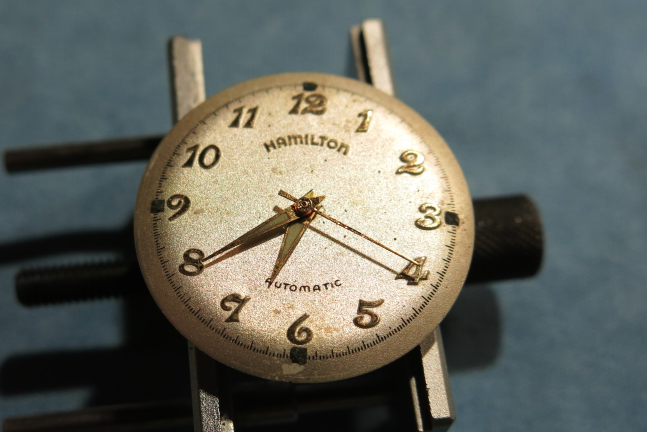 Under the dial, the movement is fairly typical.  The hour wheel, cannon pinion and keyless works get removed in order to give the parts a good cleaning. 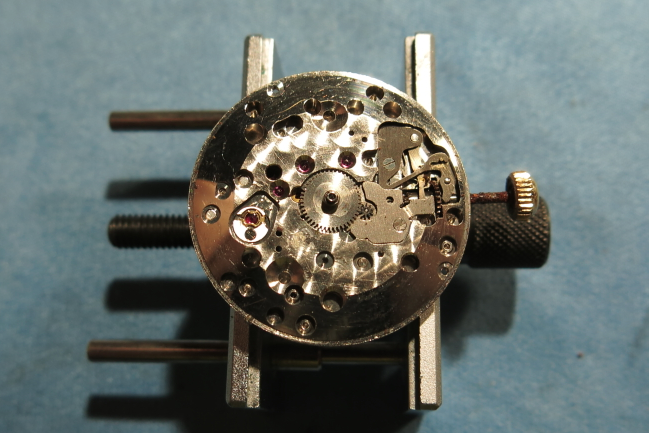 Here, most of the parts on the dial side are removed. 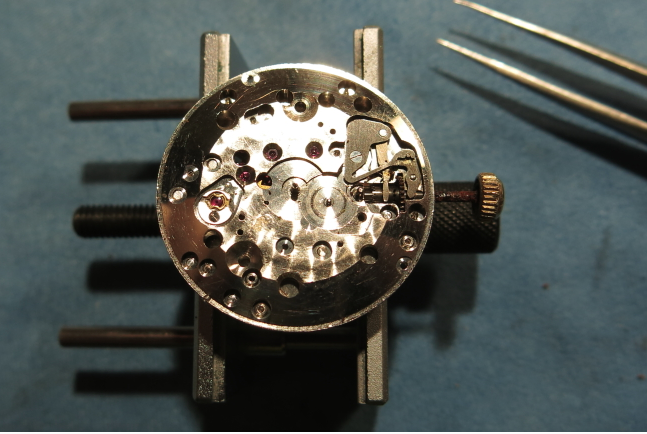 On the rotor side of the movement the first thing to come off is the rotor assembly.  There are three screws that need to come out, then the rotor comes off in it's entirety. 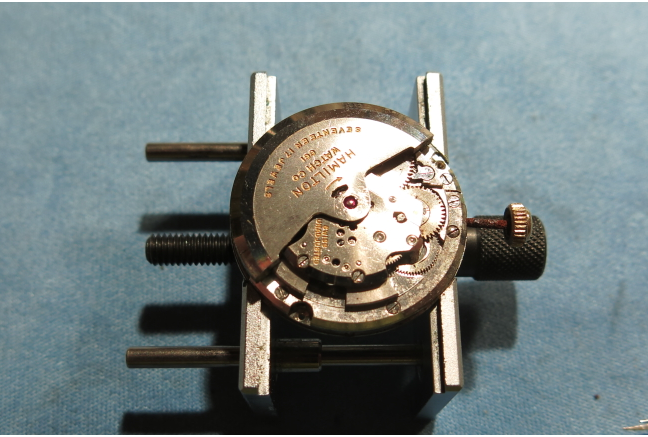 The underside of the rotor is a dirty, corroded mess. 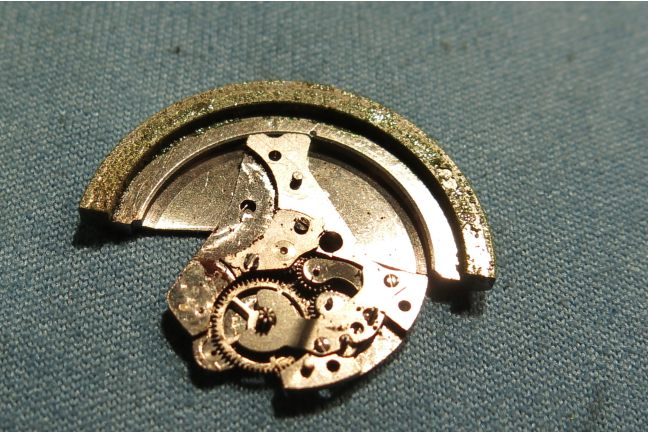 With the rotor removed this movement now looks like your typical Swiss mechanical movement.  I was shocked to see all this dirt and grime inside.  It's no wonder this watch stopped working.  The next step is to remove any tension left in the mainspring and to pull the mainspring barrel.  The larger wheel below is the ratchet wheel that drives the mainspring.  The crown wheel is below it and below that is a wheel that engages the rotor assembly and allows it to wind the watch. 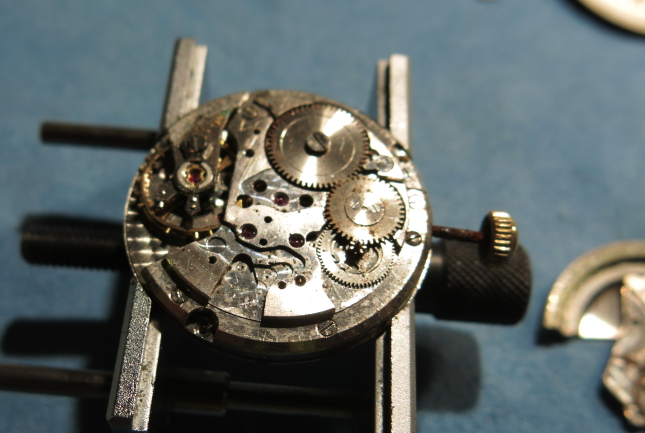 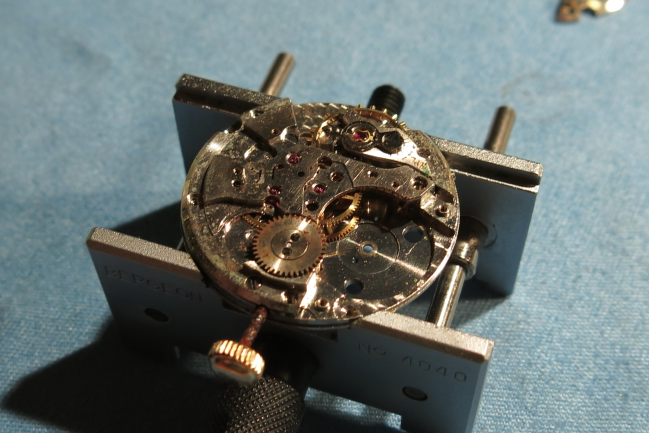 With the train bridge removed, two of the wheels can be removed.  The one in the center is the fourth wheel and drives the sweep second hand.  The other wheel below that is the third wheel. 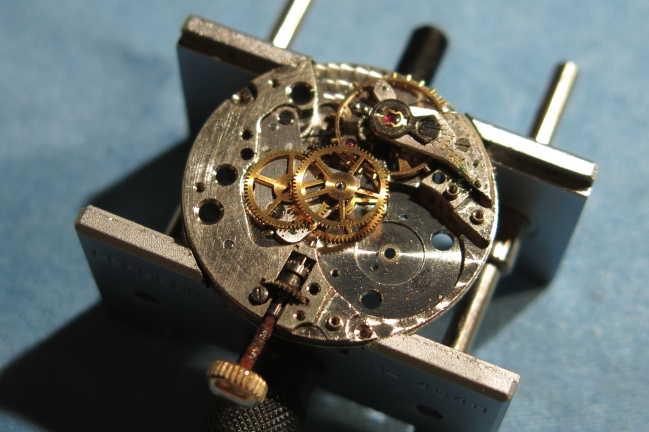 With those wheels removed, there's another bridge underneath that holds just the center wheel.  The escape wheel is blocked by this bridge, although it's not supported by it.  Two screws hold the bridge in place. Once they're removed the bridge can come out as well as the escape wheel. 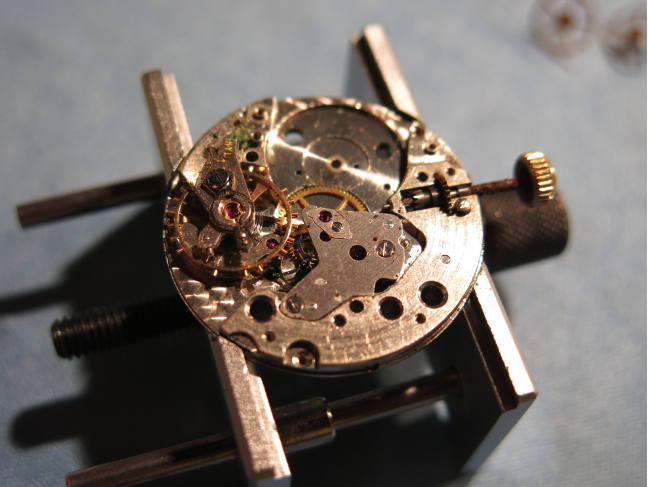 Normally the center wheel is the first wheel out but in this movement it's blocked by the pallet fork.  So the next thing to be removed is the balance assembly. 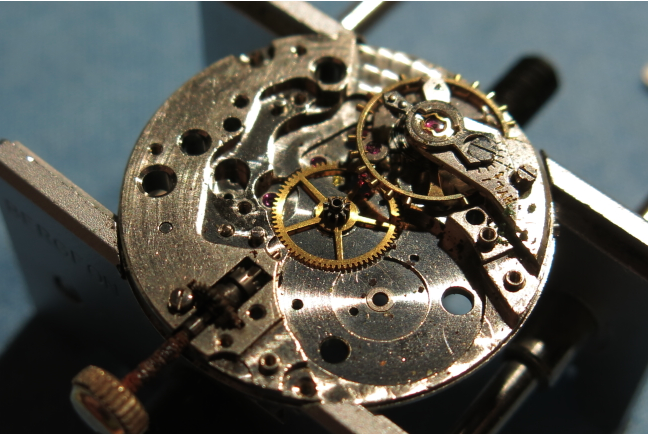 With the balance out of the way, the pallet fork bridge and pallet fork can come out.  One screw holds it in place.  Finally the center wheel can be taken out and everything can go into the ultrasonic cleaner. 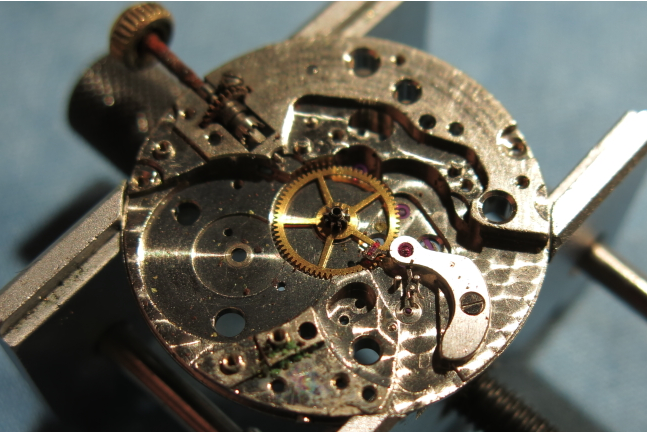 With everything cleaned and dried, the parts go back in place in the reverse order that they were taken out.  So that means the center wheel and pallet fork go on first. 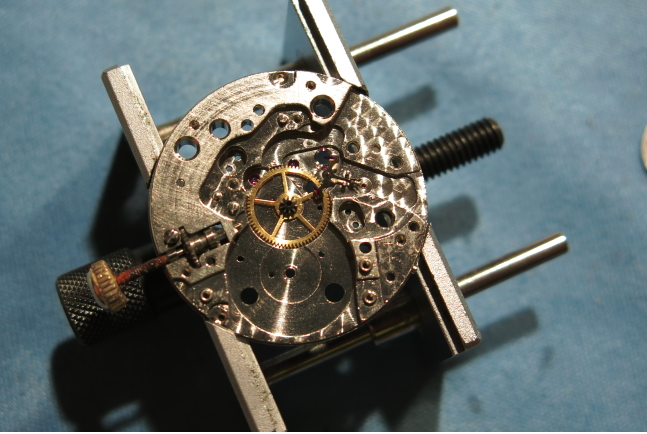 It might be hard to make out in this photo but this is the angle that I look at the pallet fork to make sure that it's arbor (axle) lines up correctly with it's supporting jewels.  It has to be lined up correctly or when you tighten the screw you can break off one of the pivots - then you're toast.  You can see (maybe) the tip of the pivot sticking out of the ruby jewel indicating that everything is lined up. 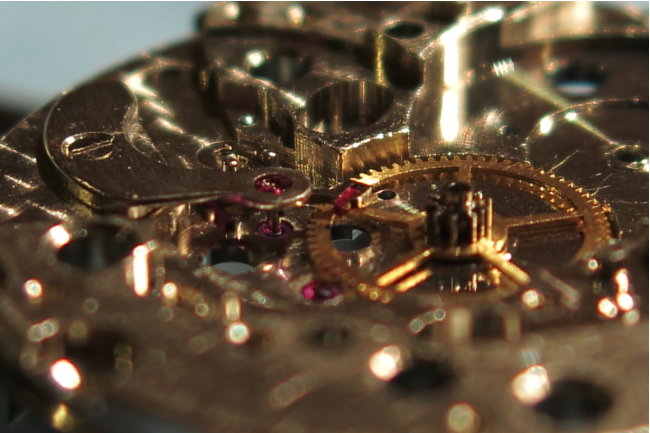 All the wheels go back in and the train bridge is reinstalled.  Getting all the wheel axles to line up is tricky.  It requires great patience and a gentle touch - not to mention a good magnification visor.  The four screws go back in to hold it in place. 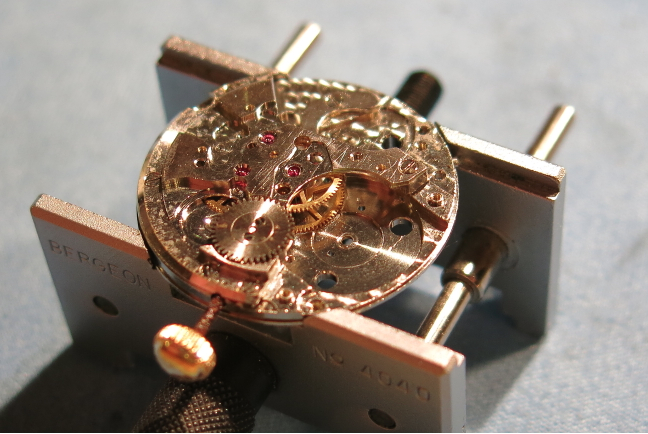 The mainspring barrel goes back in, along with it's bridge.  At this point you can wind the watch by the crown like a mechanical movement.  I'll put the balance assembly on next, make sure the watch is running properly and then reinstall the cleaned up rotor assembly. 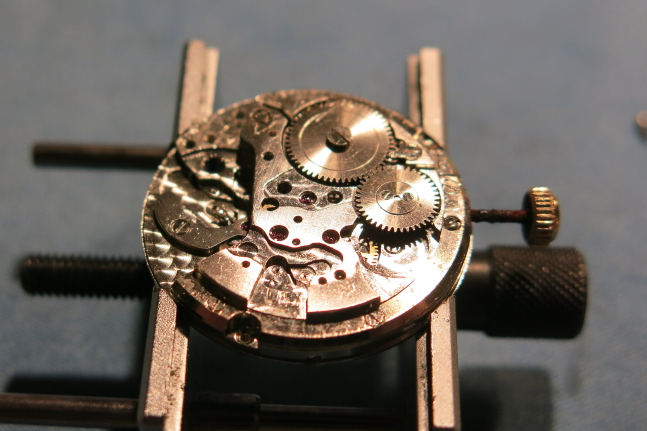 With everything put back together and reinstalled in the freshly polished case, the Automatic K-451 is ready for some wrist time.  The dial cleaned up well, I think.  I'm not sure what the black squares are all about but I don't have a catalog image to compare it to... so this is as good as it's going to get. 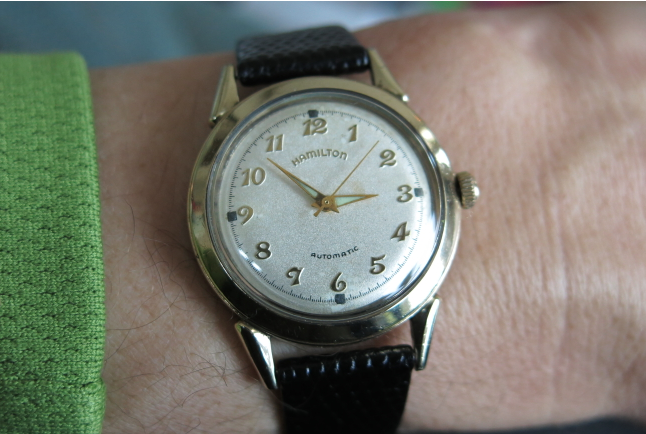