Hamilton began making watches in 1892 and strictly made pocket watches.  Pocket watches come in different sizes as well as with different case designs.  Two case styles are typically used... "open faced" where the dial is displayed through a glass crystal and "hunter style" - where the there is a flip cover over the crystal that is usually actuated by pressing in the crown.  Hamilton's first pocket watch was an open face, size 18 grade 936 pocket watch. 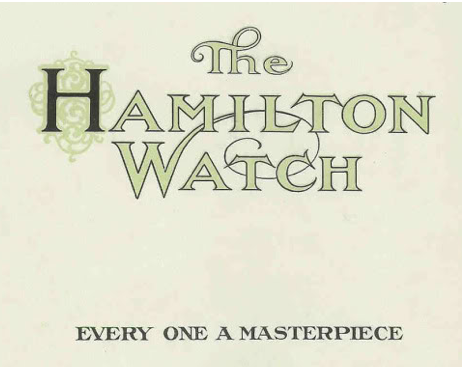 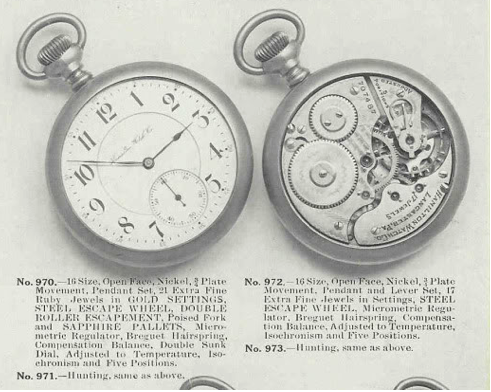 "Back in the day", as they say, you could go to a jeweler and pick out the movement and then pick out a case style that accommodated the movement and the jeweler would assemble the watch for you.  Sometimes you'll find a really nice movement in a very inexpensive case, or vice versa, depending upon the choices of the original buyer.

I recently purchased a hunter style pocket watch and it's my only Hamilton version.  I think they're somewhat less common than open faced versions.   I make it a point to service every new watch I get before using them (you should too if you don't know it's history).  So, I'll show you what it takes to overhaul a 973.

First, here's a shot of the finished product. 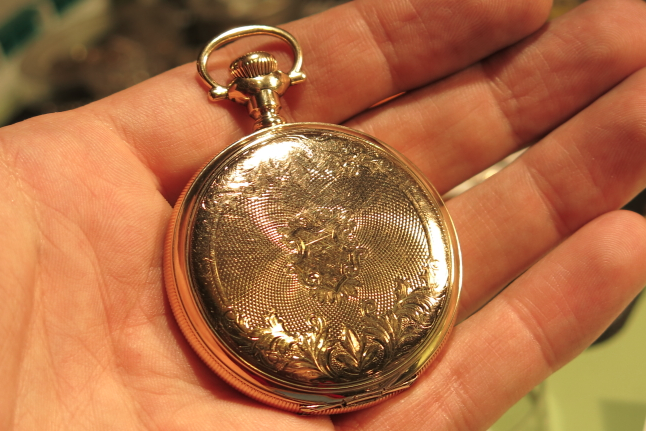 Of course, the watch must be disassembled.  That follows the same course as pretty much every other overhaul I've posted but it's also the reverse of the re-assembly, which I will show you below.

So here, all the parts are laid out and ready to go into the cleaner.  I usually put my parts into baby food jars with cleaning solution (or rinse) and then submerge the jar in my ultrasonic cleaner filled with water.  Unfortunately, a size 16 pillar plate (main plate) is too big to fit in a baby food jar, so cleaning all these parts takes a little extra effort.  These parts are so large that cleaning the small parts separately from the really large (and heavy) parts is a good idea anyway. 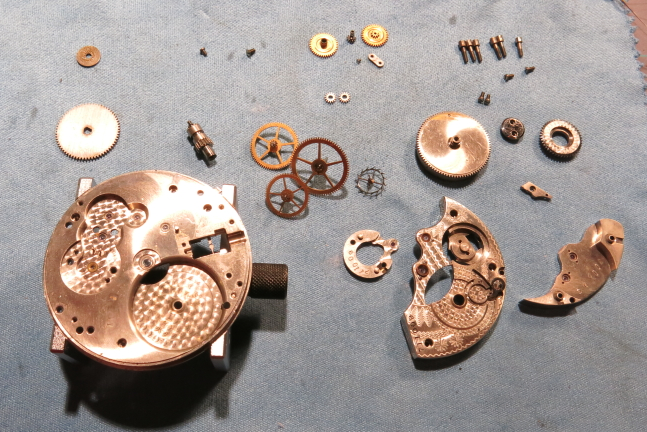 While the parts are being cleaned I will clean and polish the case.  Hunter style cases have several parts... a front cover, a bezel to hold the crystal, the case center, a dust cover and the back cover.  There are lots of surfaces to clean up. 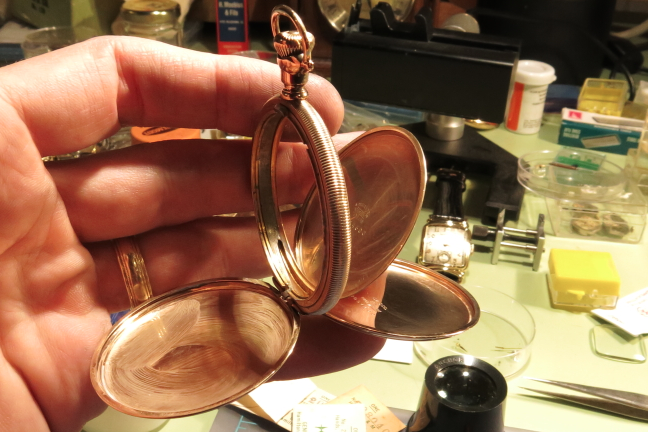 Everything is eventually cleaned and set out to dry before reassembly.  These parts definitely sparkle a lot more than before they were cleaned. 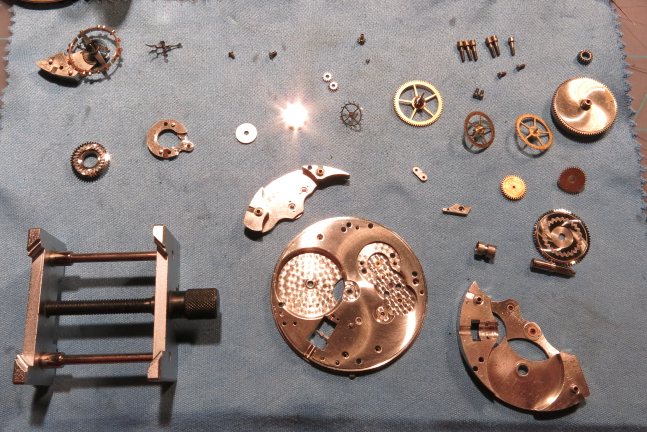 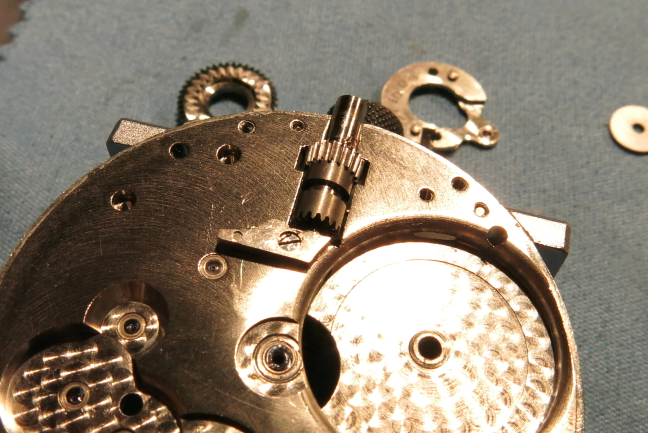 The pallet fork in this movement is really interestingly shaped.  Usually it looks like an anchor (and it's often called an anchor) but this one is definitely fork-shaped.  It will go in next. 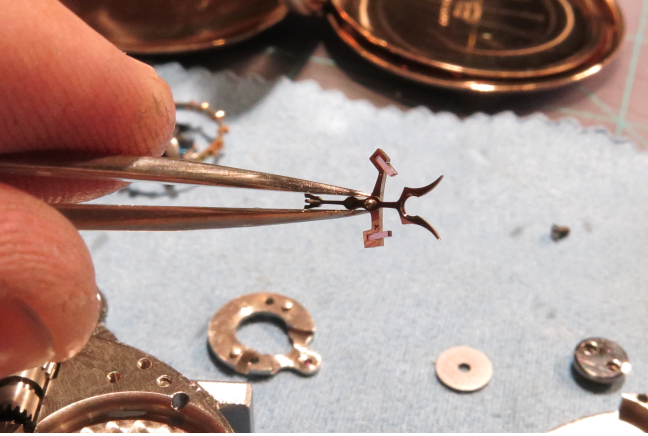 All of the jewels get a tiny droplet of oil and then the parts can go in.  In the shot below, the pallet fork is in place.  It's bridge will go on next and secure it in place. 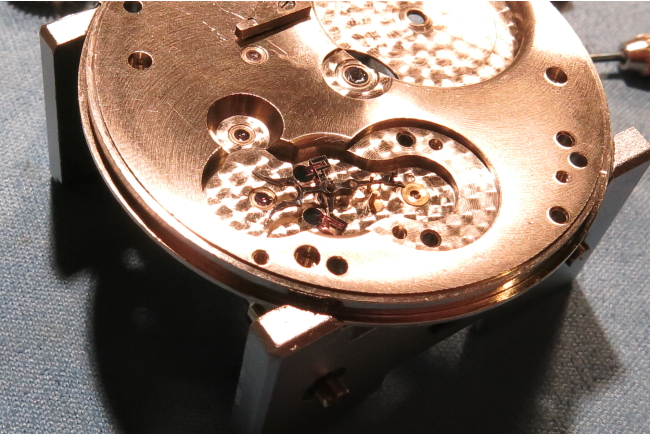 Now the escape wheel and fourth wheel go in their respective positions.  The escape wheel is just to the right.  It's silver colored and hard to see. 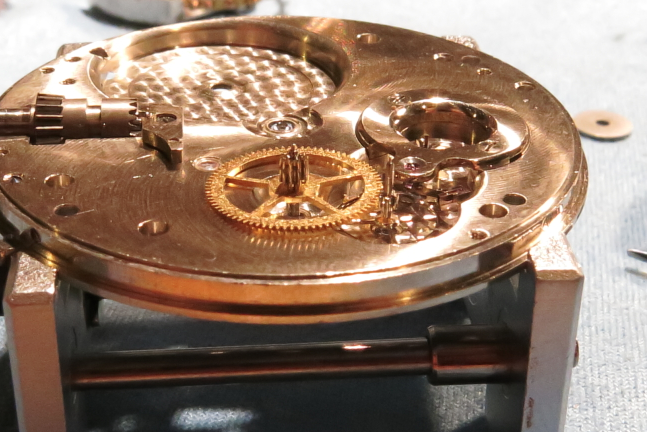 And the train bridge is secured to hold the two wheels in place.  These pocket watches offer a LOT more room to see if things are lined up correctly before securing parts in place. 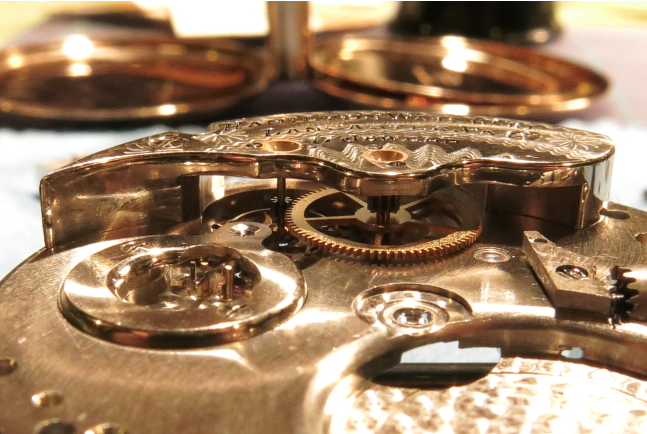 Next, the third wheel, center wheel and mainspring barrel go into place.  The center wheel is technically the "second wheel" in the gear train.  The teeth going around the barrel make up the "first wheel". 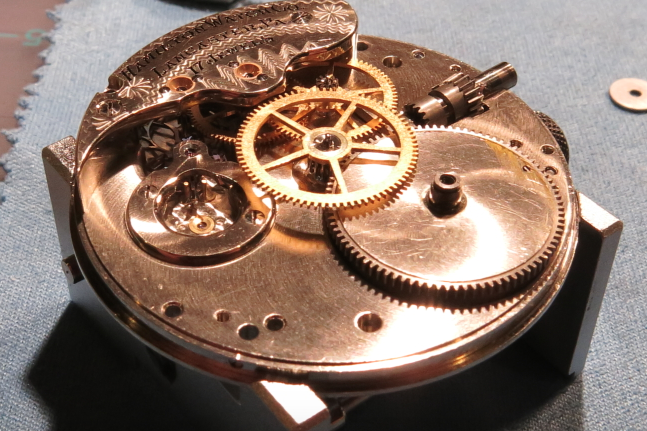 With everything lined up, the barrel bridge goes on and is secured in place.  A gentle prod to the center wheel makes the pallet fork move, so everything is lined up and engaged correctly. 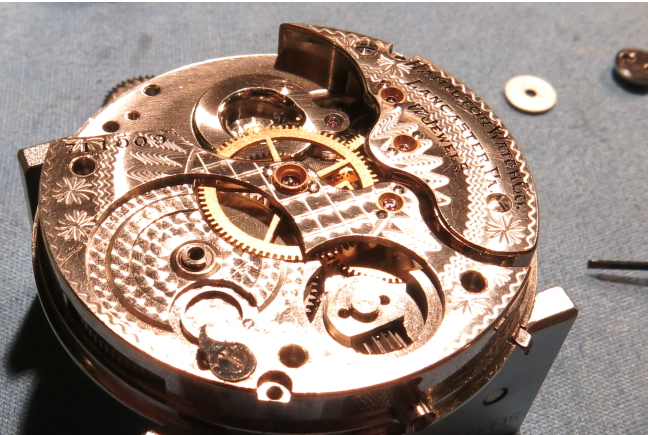 The ratchet wheel (over the barrel) and the transmission wheel (aka winding wheel) go on next, with lubrication of all the bearing surfaces. 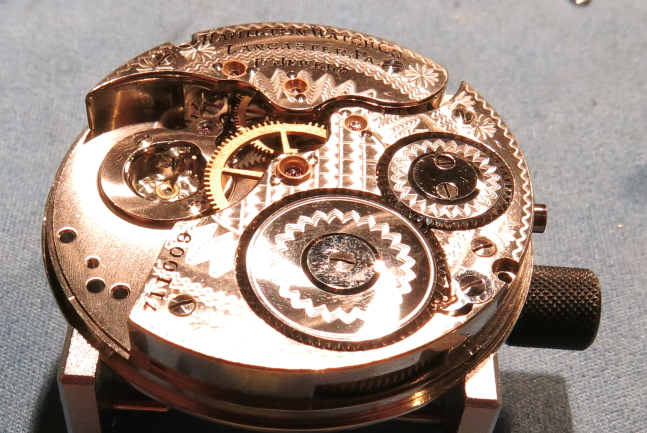 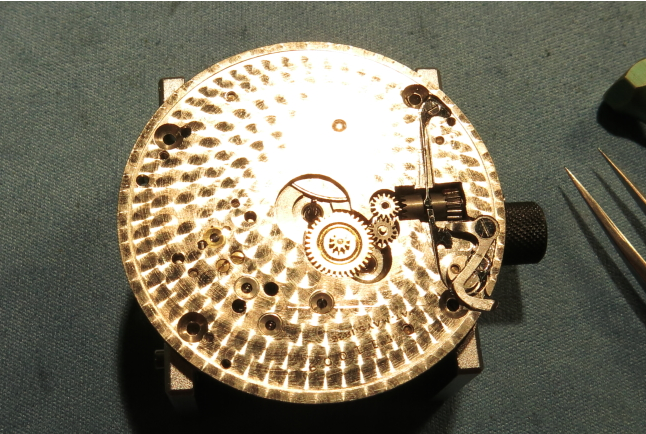 In order to put some tension into the mainspring, I temporarily put the movement back in the case so I can wind it with the crown. 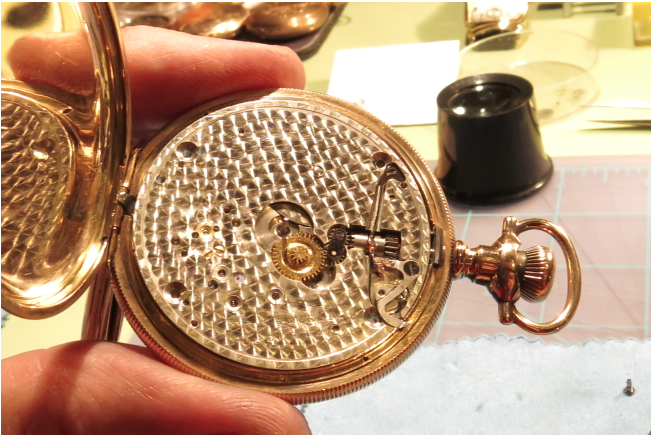 Next the jewels in the balance assembly get a droplet of oil and it is ready to go back in place. 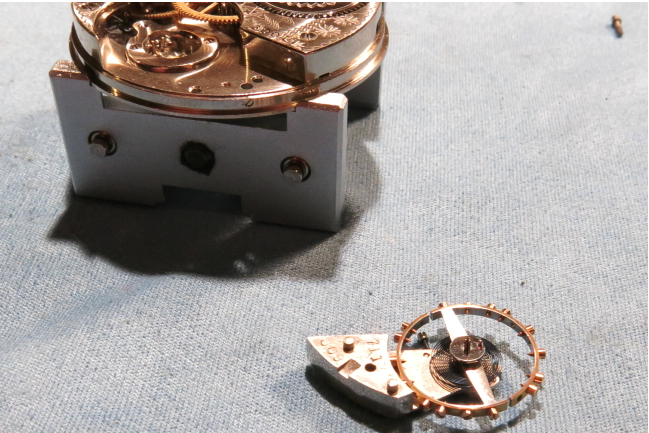 And here the movement is happily ticking away. 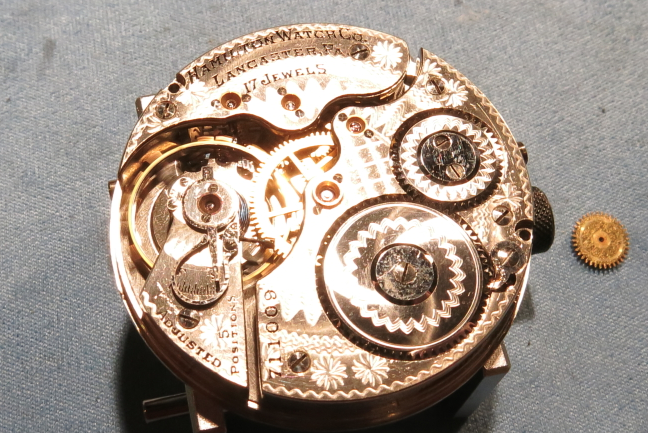 The cannon pinion and hour wheel go back into place and the movement is ready to have the dial put back on.  Note the set lever is pulled out and the clutch wheel is moved to the left and engaging the setting wheels. 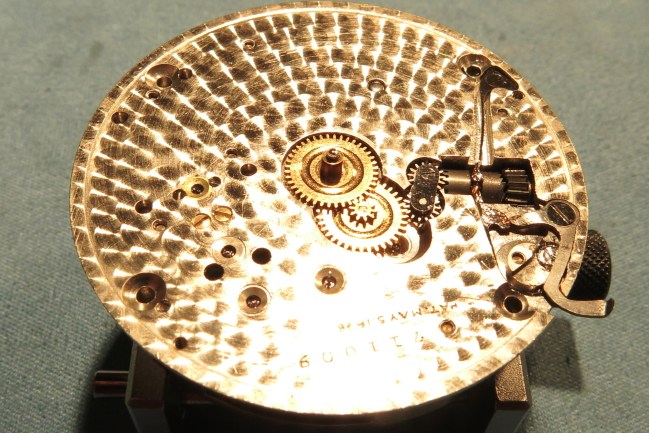 A trip to the timer shows it's running 4 seconds fast per day... not too bad for a 104 year old watch. 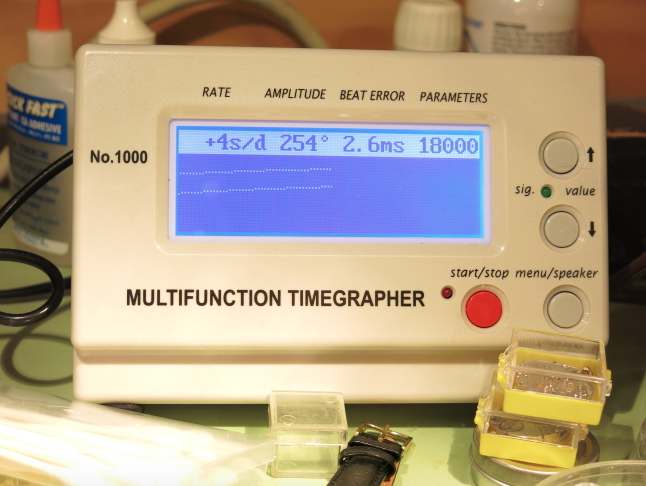 The movement is reinstalled in the case. 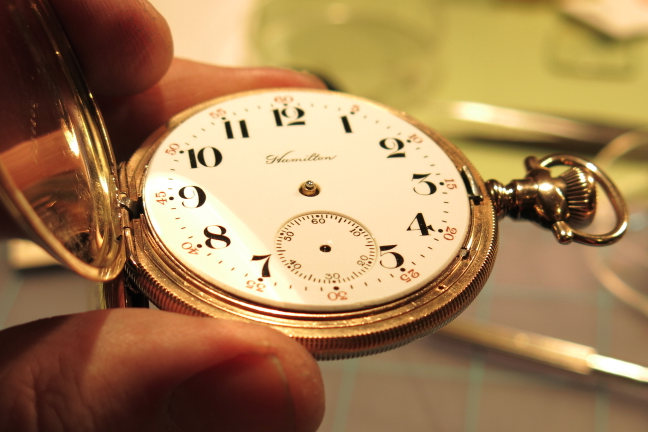 And it's secured in place with two case screws on opposing sides of the movement circumference. 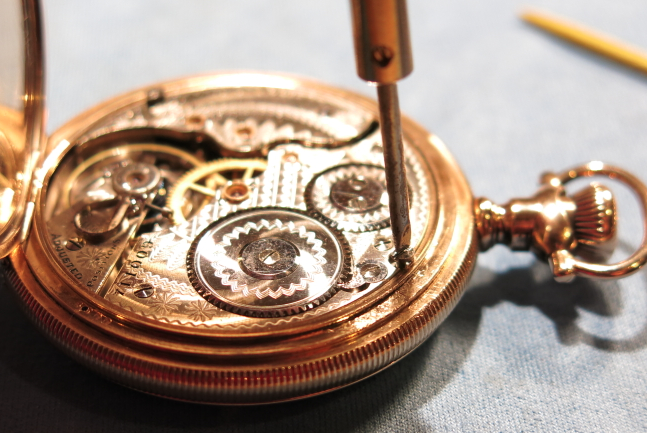 Everything is safe and secure so the dust cover and back cover can be closed up. 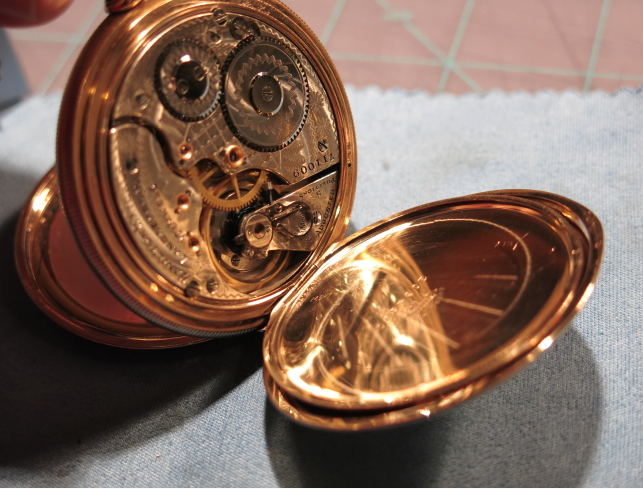 This case is in excellent shape and free of engravings. 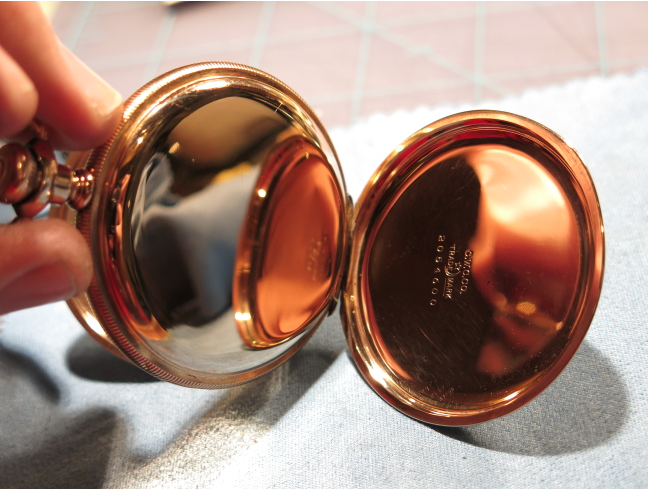 Next the hands are reinstalled.  All I need now is to purchase a low profile crystal to protect the dial and hands so this watch will be complete. 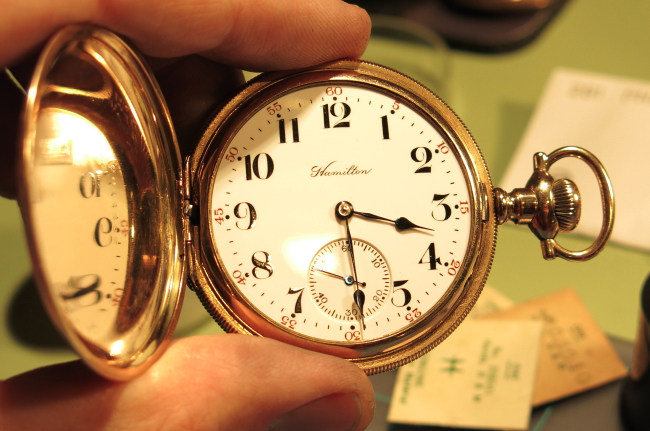