A watch is considered fully jeweled at 15 jewels.  Hamilton marketed it's status as a premier manufacturer of high grade watches by producing no movements with less than 17 jewels.

A fully jeweled watch typically has jeweled bearings at each end of each wheel... the center wheel, the third wheel, the fourth wheel and the escape wheel - that's 8.  The pallet fork adds four more jewels... two for the arbor (or axle) and two for each pallet - that's 12.  The balance wheel adds three more... two for the ends of the balance staff and one for the impulse pin - that's 15.

Two more cap jewels over the pallet fork gets you to 21 on a 21 jewel pocket watch.

On the 770, in addition to the basic 17, there are cap jewels on the escape wheel, the dial side of the pallet fork, and over the escape wheel, fourth wheel and third wheel on the train bridge - for a total of 22.

The 770 was used in round watches, rectangular watches and even asymmetrical watches throughout the 1950's and 1960's.  It was the last movement Hamilton made in the US when Hamilton ceased production in 1969.

A good example of the 770 in a round watch is the 1958 Newlin.  The Newlin was produced for four years. 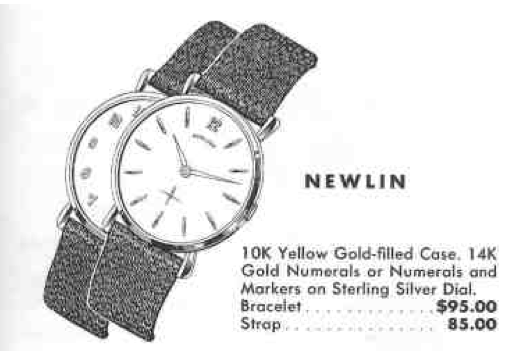 The Newlin comes in a 10K yellow gold filled case with a choice of two different sterling silver dials... one with solid 14K gold numerals and the other with solid gold markers.

I've only come across one Newlin example... the one with the numeral dial.  It's a good sized watch, especially for a vintage model.  It's about 32mm wide, excluding the crown and 40mm lug tip to tip.

It's a very clean, elegant design and a sharp looking watch.  Don't you think so? 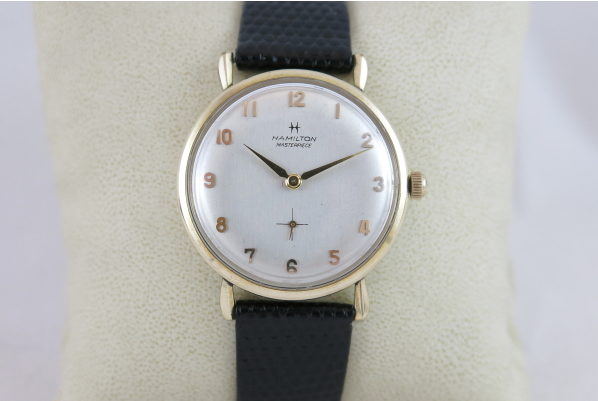