Well, if you follow my posts this next watch will look slightly familiar.

In the late 1950's Hamilton introduced a line of watches called the "Thinline" which featured specially designed movements that were super-thin so the watches would lay very flat on the wrist.

Earlier this month I posted a thread on the Thinline 4003 - a very cool looking watch with a lollipop hour hand and stick / baton minute hand.  It had caught my eye while surfing eBay because earlier in April a guy contacted me via my blog to ask about his grandfathers watch - which was also a Thinline.  His was a Thinline 4002.  While trying to identify it for him I found out it was a pretty rare watch and definitely worth restoring.

The Thinline 4002 was introduced in the 1962 and produced for three years. 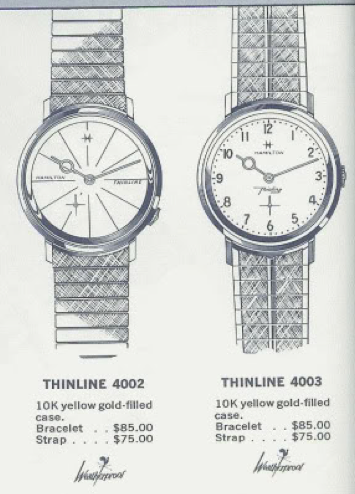 As you can see in the catalog image, the Thinline 4002 is similar to a 4003 with it's lollipop hour hand and baton minute hand.  The dial has no figures other than the Hamilton H logo.  But what makes the T4002 really unusual is the crown is located at the 4 position which shifts the second hand to the 7 position.  This crown location was probably inspired by the myriad electric models with crowns at 4 - but it's very uncommon for a mechanical model.

With a gold filled case and a Swiss movement, this was one of Hamilton's entry-level watches and was intended to compete at a price point low enough to contend with other manufacturers imports from the period.  I guess it's uniqueness made it less popular, as today the Thinline 4002 is a very rare watch and it commands a healthy premium when it comes up for sale.

Recently, as fate would have it, I happened upon a Thinline 4002 for sale and I jumped at the chance to get it. 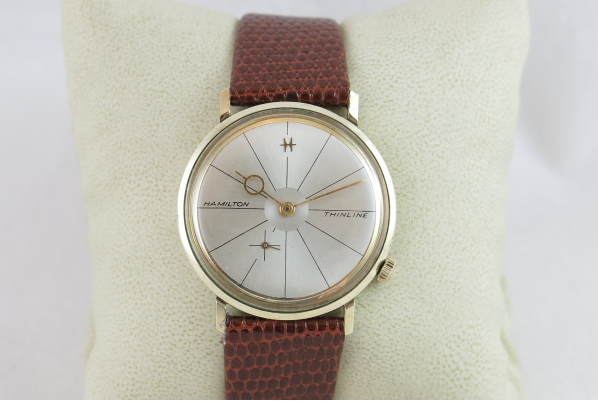 On the wrist, the Thinline 4002 wears well and is very sleek - living up to it's name.  My only criticism would be the hands are so thin that it takes a little extra effort to tell the time... but that little extra effort is also a good opportunity to enjoy the watch a little more. 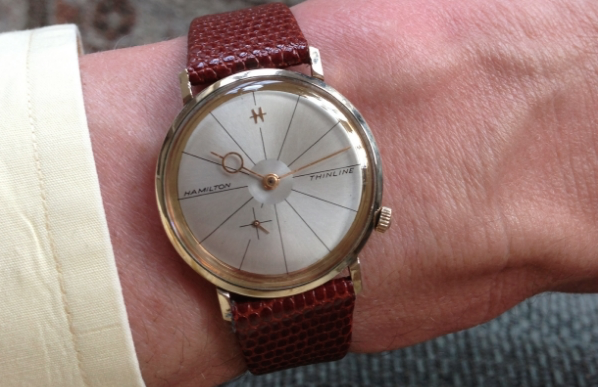