In 1959 Hamilton had over 100 different models in it's lineup - and that's not including all the variations within models.  So it's not surprising that some models were popular enough to be readily found today and some are harder to come by.

I just purchased a 1959 Hamilton Orson in need of some serious TLC.  It's the sort of watch that fits into the category of models you just don't see very often. 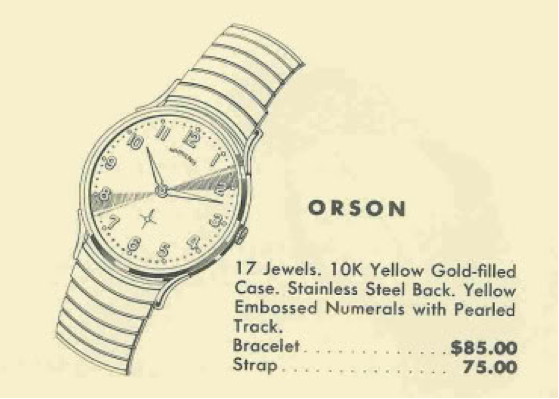 The Orson was produced for two years and is a middle-of-the-line watch model.  It wasn't an entry level watch and it's not a high end model either.

What makes it a mid-grade watch is it comes in a 10K gold filled case (not rolled gold plate) and it runs an American-made 17 jewel Hamilton 730 movement.  The 730 is a shock jeweled version of the 747 and features a more robust balance assembly to withstand impacts like banging into door jambs or being accidentally dropped.

I picked up my example of the Orson recently because the price was right.  Looking at the photo below, it's not exactly the kind of watch that will draw a lot of attention.  I suppose it's the equivalent of a Chevy station wagon running a 409 V-8 under the hood... it's worth getting just for the engine. 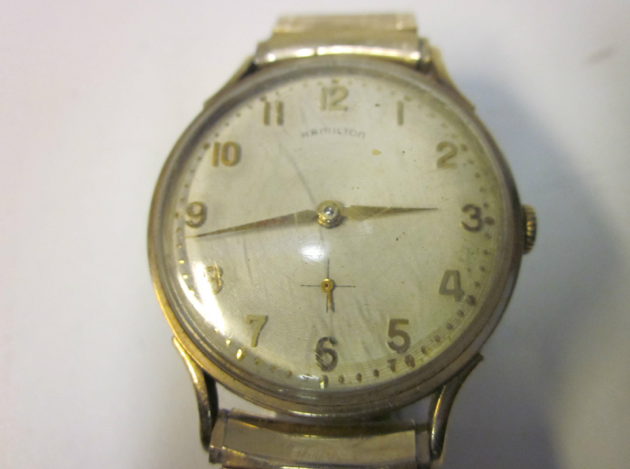 This watch was a retirement presentation given to a man in 1960.  Based on how beat up it is, it was a valued keepsake and the man must have worn it quite a bit.

I think it's interesting to see how many watchmakers marks are inside the case back to indicate that the watch has been serviced.  Sometimes there aren't any at all and sometimes there are dozens.  I could only find one inside this watch - which might explain why it was sold as "not running".

Watches (and clocks) need to be regularly maintained.   Given the proper maintenance they will last a long, long time.  It's better to overhaul a working watch than to wait for it to stop working - just like it's better to get your car serviced before it breaks down.

I get a lot of questions through my blog about getting watches repaired.  There are lots of watchmakers out there and resources like the AWCI can point you in the right direction.  However, if you want a recommendation or two, shoot me an email.

As for the Orson, the watch cleaned up really well.  With a replacement crystal and an overhaul of the movement, the watch is back to looking and running like new.  For all it's frustrations (and there are many) restoring an old clunker back to it's former self is what makes this hobby very rewarding. 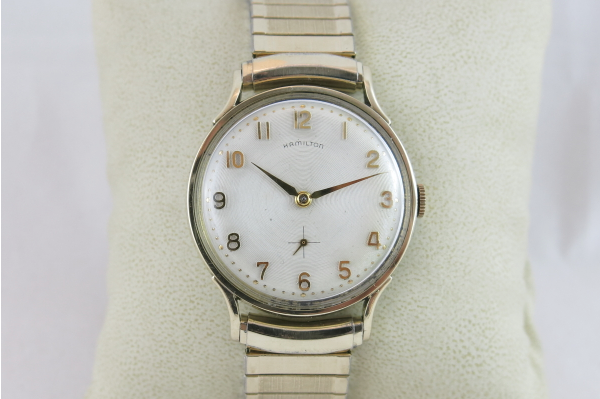