The earliest watches from the 1920's and, especially, the 1930's were often large and had very interesting engraved or stepped cases.  Different dials also spiced up the offering.

In the 1940's, watches seemed to get a lot smaller.  Hamilton discontinued their larger 6/0 sized movements in favor of the narrower 14/0 movements (the 980, 982 and 982M) and the newly created 8/0 sized movements (like the 747 and 748).  Post WWII watches through the early 1950's are usually quite small - some would even be misconstrued as ladies watches by todays standards.

Then in the late 1950's watches started to get bigger and, with American-made movements as well as Swiss-made movements, plus the "new" Electric movements, there was a broad variety of styles to choose from.  Many of the models from the late 1950's and the 1960's were down right "futuristic".  A Hamilton collector could amass a very impressive collection just by specializing in Hamilton's space-age watches from 1955 on. 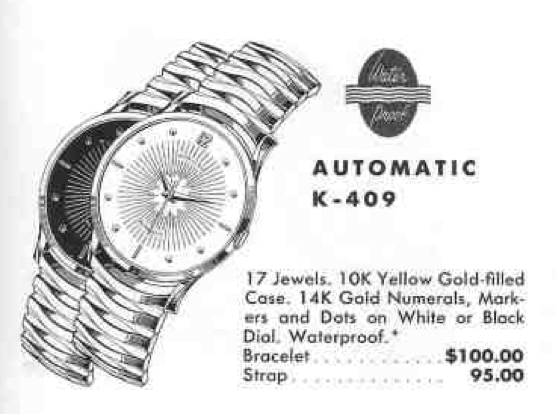 The K-409 came in a 10K yellow gold filled case with your choice of a black dial or a white dial.  The dial is very fancy with a lines radiating from the center and extending to a simple band that encircled the outer perimeter.  Gold numerals, dots and markers complete the aesthetic.  Under the hood (so to speak) you'll find a 17 jewel Swiss-made Hamilton 661 automatic movement.

I find the K-409 to be an interesting but cumbersome design.  The crown recesses a little into the side of the case so it tucks into the side and is hard to get to if you want to wind the watch by hand.  To set the time you pull the crown out and it's better exposed - so it's a lot easier to set than to wind.  Also, I think the dial design makes it a little hard to see the hands.

But, it's those design elements that make this watch a little different than your ordinary watch - which is exactly what I imagine the designers were trying to accomplish 55 years ago.

I guess they felt that if you didn't like the design, that's cool, they had over 110 other models you could choose from. 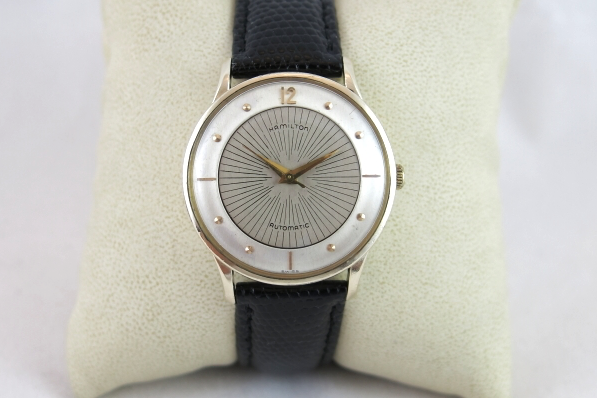