Hamilton ceased being an American company in 1969 when it sold it's operations to what is now a part of the Swatch Group... the same company that owns other high end watch lines like Omega.  After 1969 all of Hamiltons models featured Swiss-made movements.  Therefore, a lot of Hamilton collectors focus mainly on pre-1970 models.

I think the 1970's also brought some pretty funky, chunky and clunky designs - so that could limit what people have interest in collecting as well.  Not all 1970's designs are monstrosities though - and some carry forward designs started in the 1960's.

Another easy tell is if the dial says "selfwinding".  That seems to be a 1970's term for automatic.

Anyway - I recently caught my eye on a 1970's watch that I thought was really cool looking.  It reminded me of something Woody Allen would have worn in "Sleeper".  It's a 1973 Sellfwinding A-517. 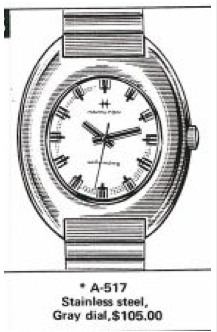 The A-517 only shows up in the 1973 catalog and the catalog is in black and white - so you don't get a good idea of what the watch really looks like in person.  It's very hard to tell what the correct bracelet would be for the model but it takes an 18mm strap.

It's a large watch at about 39mm wide by 43mm lug tip to tip.  It's egg-like case tapers at the edges so it's a very smooth, almost sleek, design with no sharp edges other than where it meets the strap.

The dial is a brushed finished gray with bright silver hour markers and blue plastic accents.  The paddle-style hands are silver with a blue stripe down the center to match the hour markers. 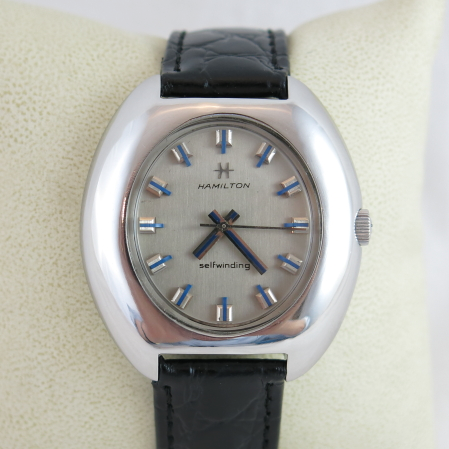 When I received the watch above, the crystal had a large crack in it.  Although the bezel opening is oval shaped, the crystal is actually round.  It is a flanged crystal sort of like a top hat and installs from behind the bezel.  The flange is round but the stepped oval portion fits into the bezel opening.

At first I thought, "Oh crap - how am I going to find a crystal for this thing?"  But it turns out I was able to find it in my GS Crystal catalog (based on the dimensions) and I was able to source one with ease. 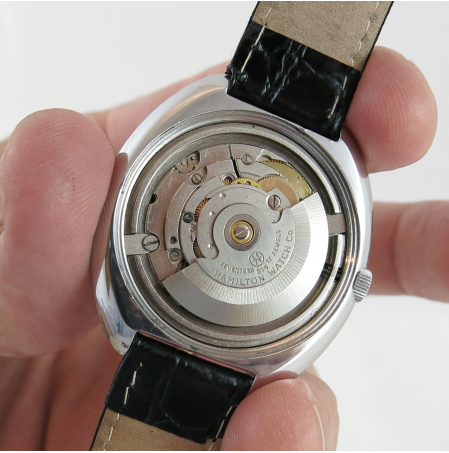 Now I just need to find a nice leisure suit to go with it.
Posted by HandyDan at 5:04 PM