Ever hear the expression, "Even a blind squirrel finds a nut every now and again?"  Well, I recently landed a very rare watch that I figured I would never see in person.

The 1932 Mount Vernon is truly a rare watch.  According to Rene Rondeau's original guide book, only a little more than 1,400 were produced in white gold filled over the two years that it was available.  Yellow gold filled examples were more plentiful - if you consider 1,721 plentiful. 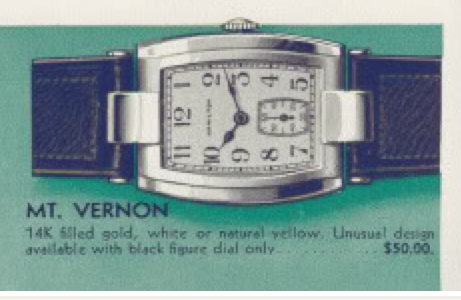 The Mount Vernon is rare in it's own right but seeing as how it's also a gold filled model, surely time has taken it's toll on more than a few examples that were produced.

The case came in white or yellow gold filled and only a black enamel dial was produced.  The hand style is called "spade".

In addition, the Mount Vernon is one of three models (than I can think of) to have used a "notched strap".  That means that the strap is held on by a threaded rod.

Well, as I said above, I recently acquired a Mount Vernon and although it didn't come cheap (to me anyway) I think I did well on my purchase.  As received, it was was quite dirty - so dirty I really couldn't tell what condition the case was going to be in when I bought it. 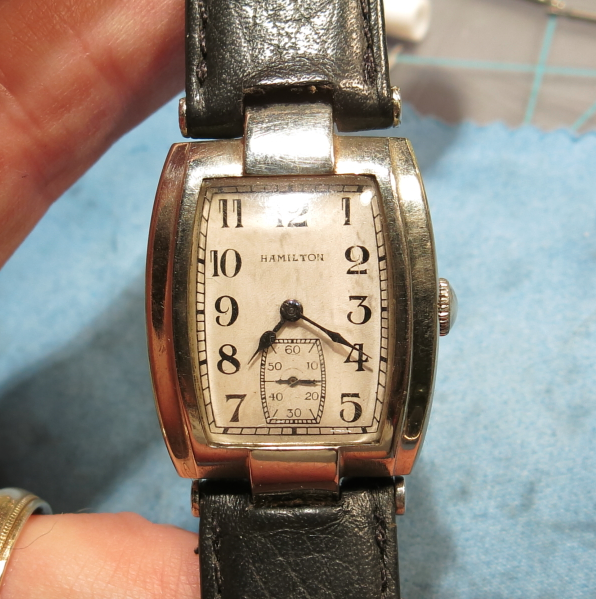 The case back is interesting too - it's rather thick compared to other models from the period and it's contoured in the center to curve to the wrist. 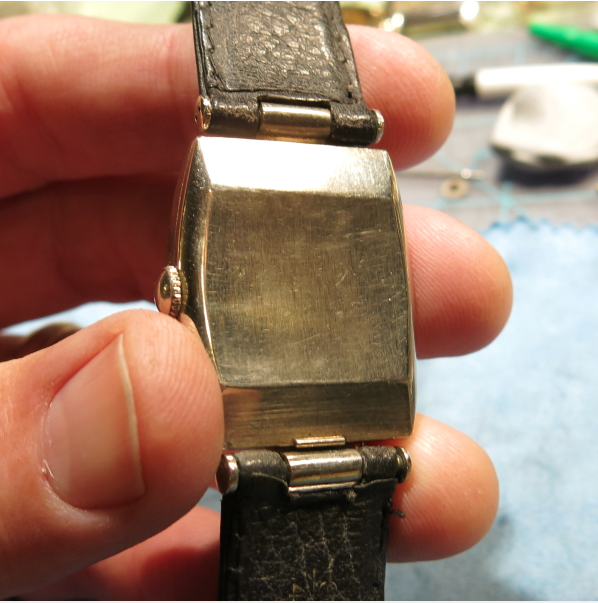 The dial is in great shape and I suspect it's been redone but redoing a dial like this is fairly straightforward and they often turn out perfectly.  Other than the back of the second hand rubbing in the register, it looks problem-free to my eye. 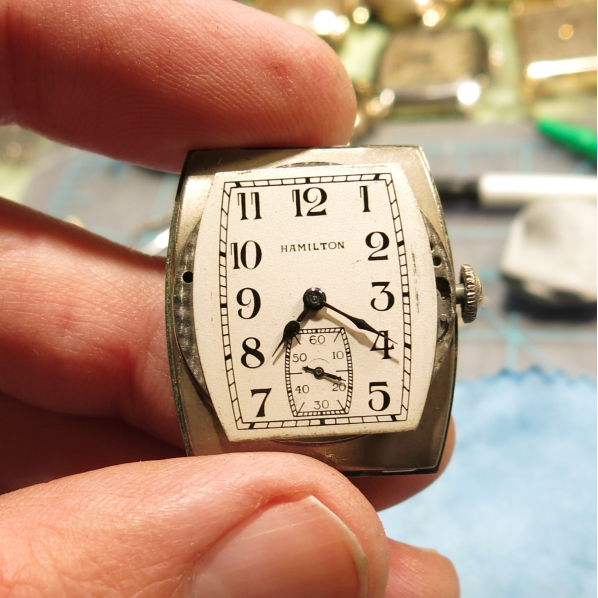 The 987F movement was running when I received it but the movement has a fine haze over it - which is a good sign it hasn't been cleaned in quite a while.  It's important to keep a running movement cleaned and oiled - as a movement that runs without oil is slowly wearing itself out. 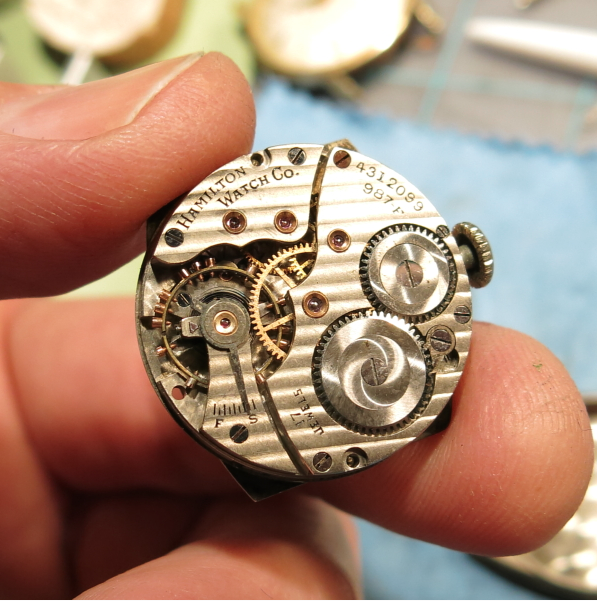 While everything is in the ultrasonic being thoroughly cleaned, I'll turn my attention to replacing the strap.  You can see below that the strap is held in place by a threaded rod that goes through both the strap and the case. 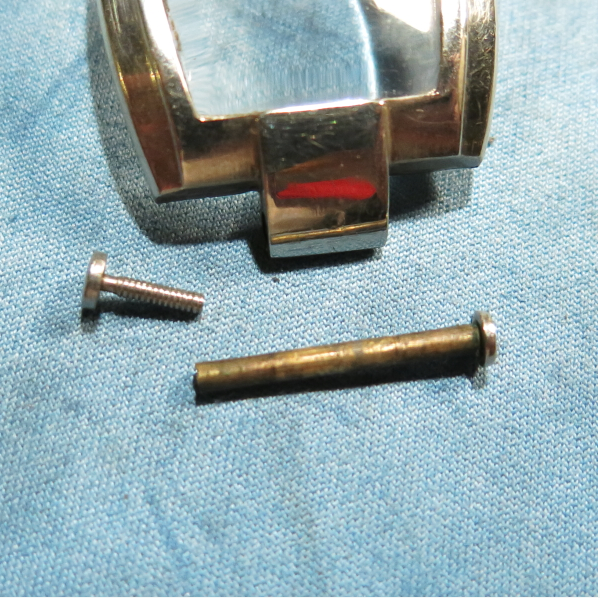 The movement's regulator was set to the slow side.  You can see in the shot below how the watch sped up as I moved it over to the fast side.  When the two lines are horizontal the watch is running at 18,000 beats per hour, or 5 ticks per second.  Right now it's running just a little fast… 8 seconds per day fast. 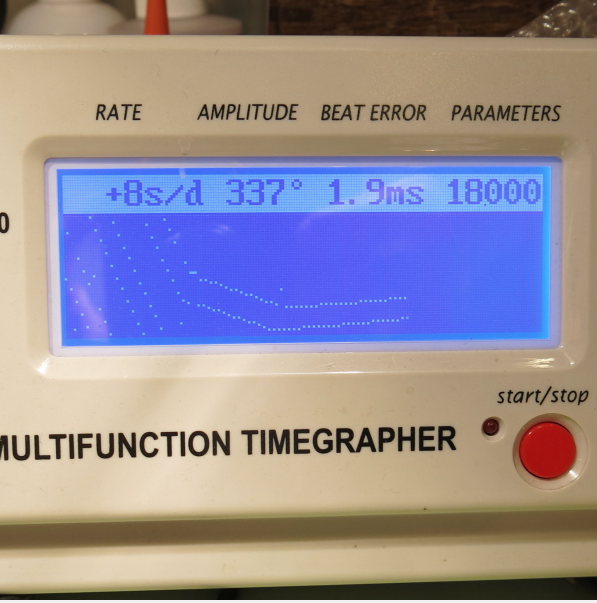 Servicing any watch is tricky - you never know how it is going to go.  Servicing a watch and then having to trim a perfectly good new lizard strap so that it fits the notch in the case is even more tricky.  But I think the results were well worth it.  She's a beauty and the case is excellent! 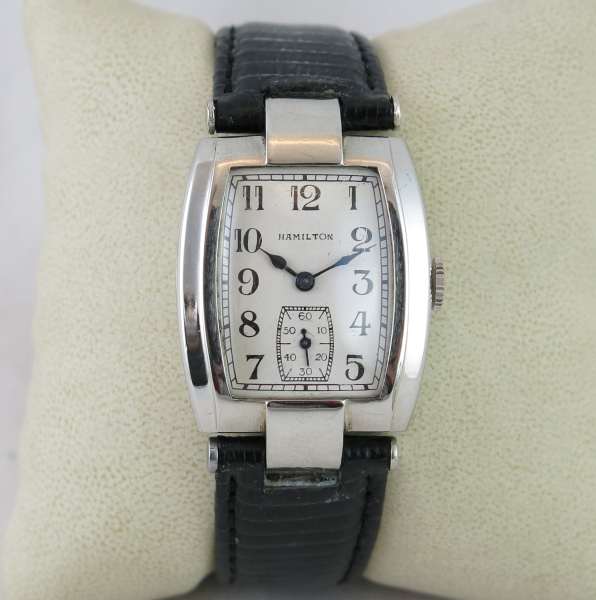 Here's a photo of a yellow Mount Vernon that I had the opportunity to restore.  The hour hand is not quite correct but they're at least close. 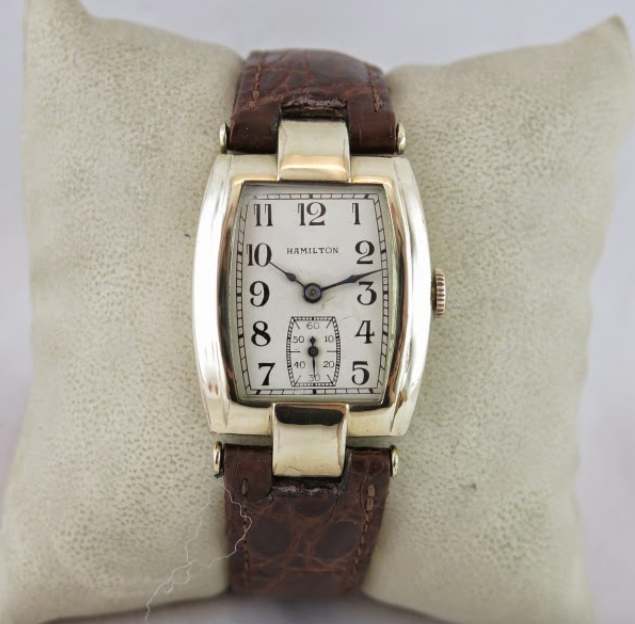