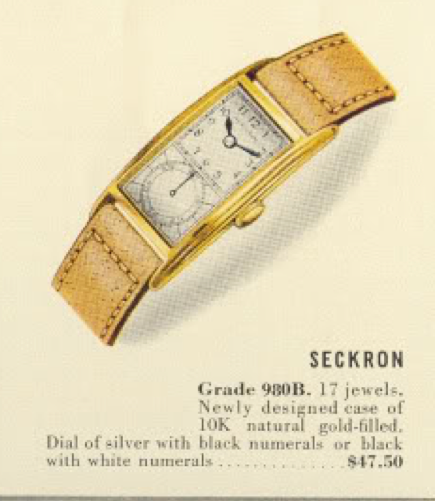 The 1940 Seckron is an updated version of the 1935 Seckron that was produced through 1939.  I posted before on the 1935 Seckron.  Although the earlier version used the same movement (a 980A or 980B) it is actually in a different case.  The similarities are there, but if you look closely there are some significant differences in the shape but a major difference is the material changed from 14K gold filled in the earlier example to 10K gold filled in the 1940 version.  By all intents and principles the 1940 Seckron should be a Seckron B. 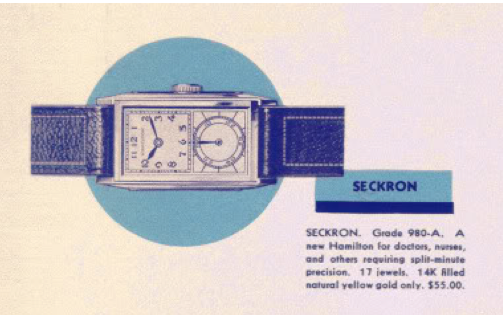 It doesn't take very long to figure out that the Seckron is a unique watch.  It's often referred to as a "Doctor's watch" because it has a prominent second hand.  You need to recall that this watch was introduced before Hamilton's first central sweep second hand movement, the 987S.

In order to provide real estate on the dial for a larger seconds register, Hamilton engineers had to move the hour and minute hands up and out of the way.  So although the center wheel (that drives the minute hand) is in the center of the watch, the minute hand has been moved upward by the use of a gear train on top of the movement.

The Seckron is expensive to purchase today, especially in good shape.  The specialized parts for them are impossible to find so even parts movements will sell for well north of $200.  A very nice Seckron that's in serviced condition is arguably worth $800 to $1000!

A friend of mine recently sent me a Seckron that he purchased online.  It's running but not very well.   It's such a unique watch that, to be honest, I don't really have the confidence to take it apart - so I'm going to send this one out to a professional watchmaker.

But I can show you some photos of it nonetheless.

Here are some shots of the outside case. 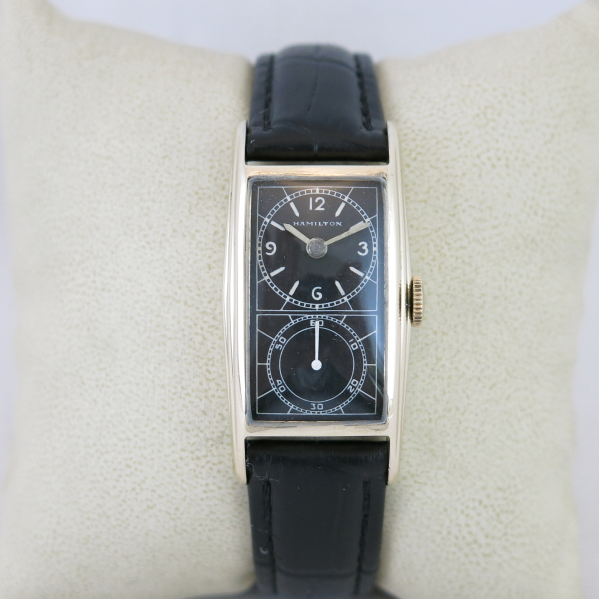 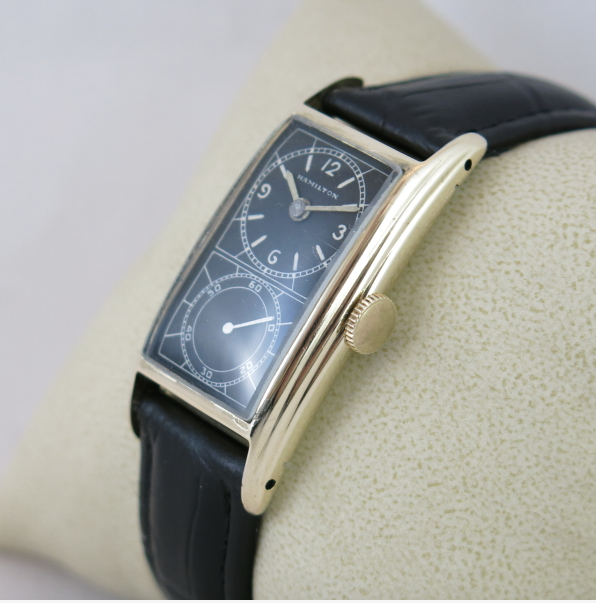 And for comparison, here's what the earlier version looks like.  The shape of the case is similar but there are lots of subtle differences - take for example the length of the lugs. 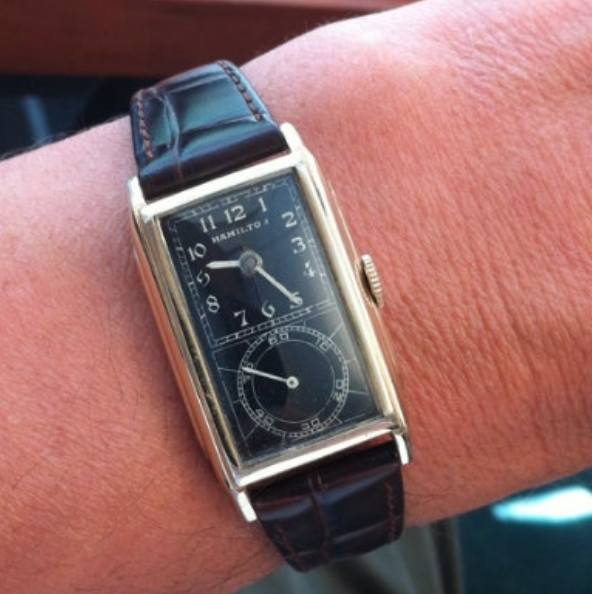 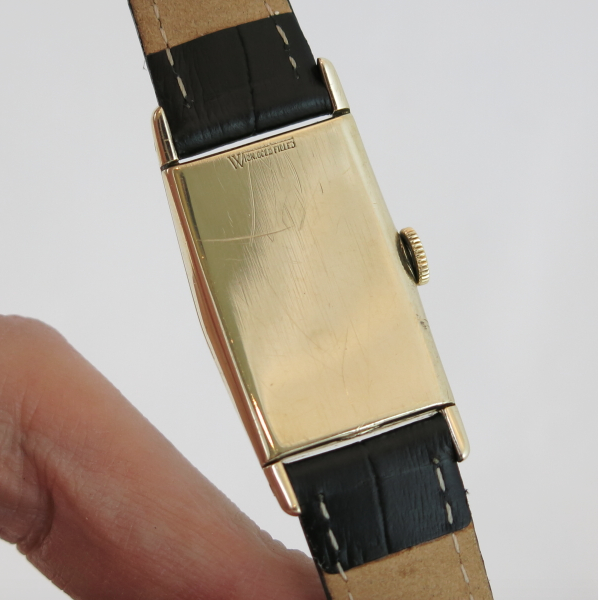 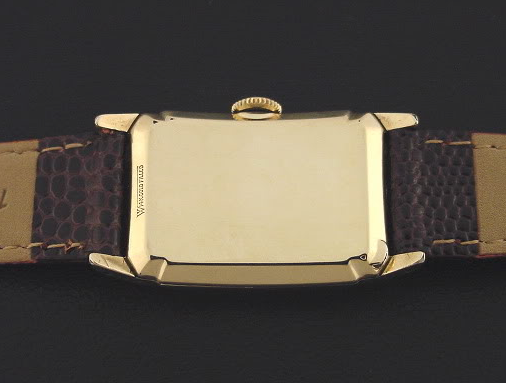 Here's some shots of the movement.  From behind, the 980B looks identical to the standard issue 980 movement - only the serial number and the train bridge give away that this is a 980B movement. 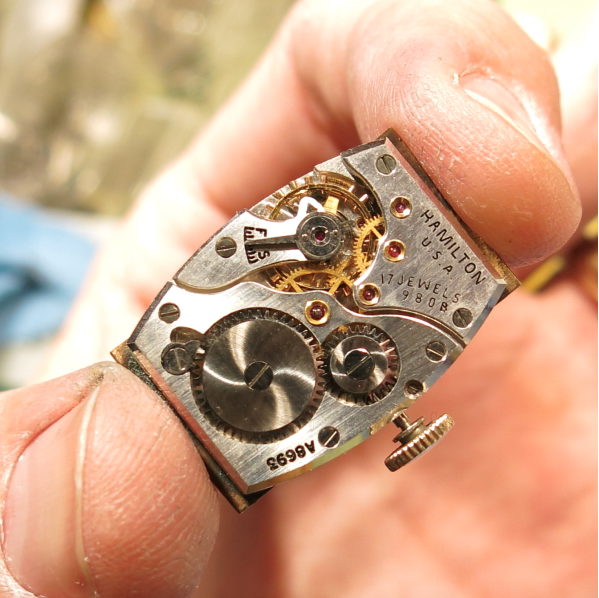 But when you look at it from the side you can see the spacer plate in between the dial and the movement that allows the center wheel to move the relocated minute hand (and hour hand).  This shot also shows that the dial is bent at the top and bottom to accommodate the case bezel.  In the earlier version the dial is flat and the space plate extends past the top and bottom of the movement. 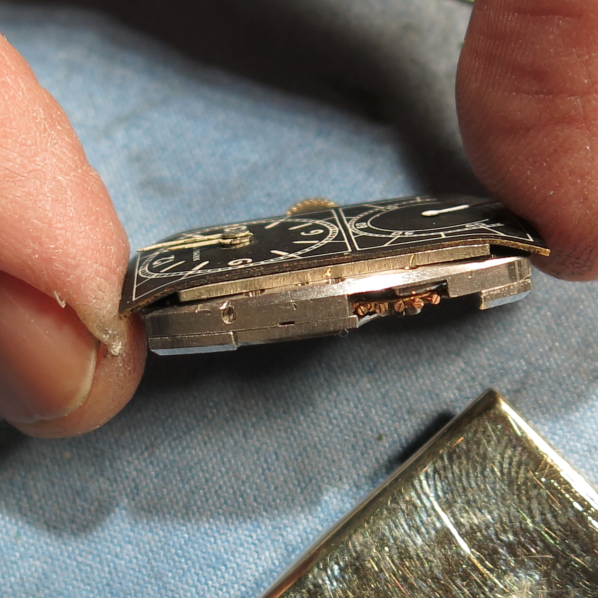 Someday I will catch the rest of the world sleeping and land me a 980B parts movement for under $150 and then I'll take it apart and finally know for sure what's going on in the spacer plate.  I have to assume the 980B has a special center wheel with a shorter arbor and a special fourth wheel with a longer second hand bit.  But what really has me curious is how the minute hand and hour hand are driven.

Here's a picture of the business end of a 980B.  Note the second hand pivot is where it normally is.  There's what appears to be a stubby hour wheel in the center that engages the minute wheel like on any other 980 movement (that allows you to set the time).  But the shortened hour wheel also engages a similarly sized intermediate wheel, which in turn, engages the displaced cannon pinion for minute hand and the displaced hour wheel for the hour hand. 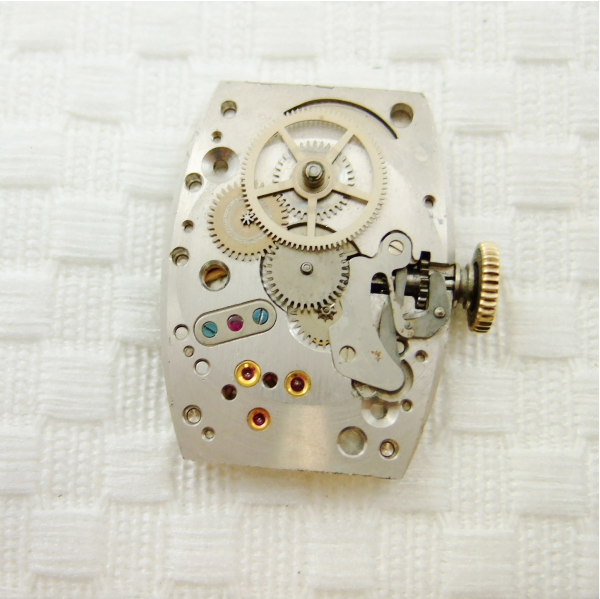