I happened to be in downtown Philadelphia this morning and killed some time walking around "jewelers row".  It's about a city block worth of jewelry stores, most of which advertise "we buy gold, watches, etc", so I thought is would be interesting to see if I could find any Hamilton project watches.

There were plenty of watches for sale but most at high retail prices and already restored.  As fortune would have it though, I came across a very cozy watch shop with a really friendly proprietor and I picked up several nice projects - one of which was a 1949 Hardy pocket watch. 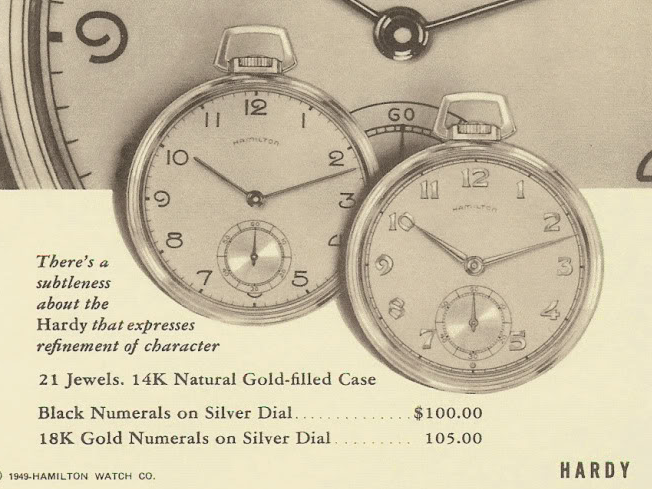 Pocket watches can usually be identified by the case and bow style, along with the movement inside.  What drew my attention to the watch was the high grade, 21 jewel 921 movement.  The 921 is a 10 size grade and a step up from the 17 jewel 917 grade.  There's also a 23 jewel version called the 923.

Here's what I started with for my 1949 Hardy.  It's was in nice aesthetic shape but the case was a little beat up around the edges.  The dial and hands were great though. The 921 movement was locked up tight and wouldn't wind at all.  The balance would move though when gently shaken - so that was a good sign.  If you've got a good eye for detail, you'll eventually see that the regulator is missing from the balance assembly.  The micro regulator is there to adjust it but the regulator itself is gone. 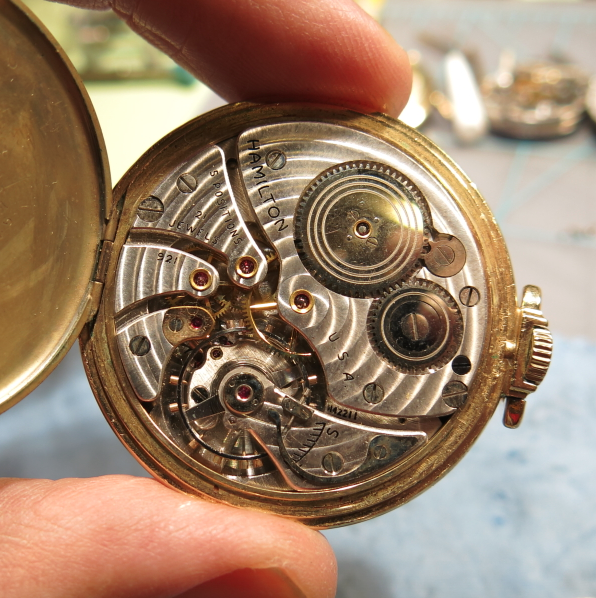 With the dial and hands removed you can see that the 921 looks a lot like the 6/0 sized 987A that you've seen me overhaul before.  The 921 is just a LOT bigger. 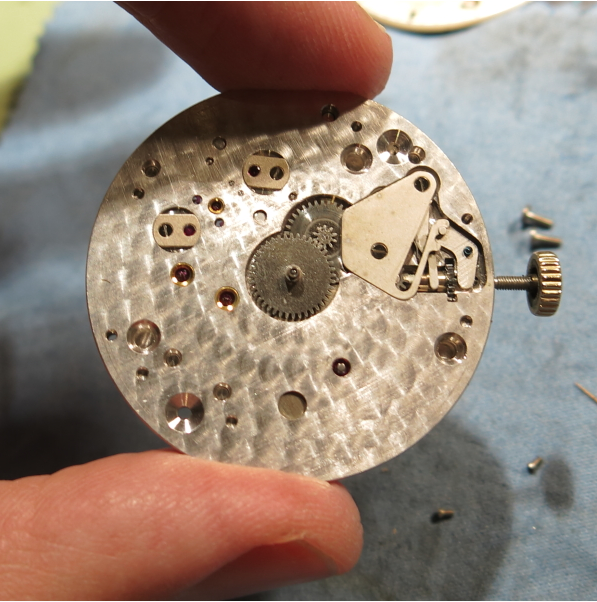 In the shot below, all three parts are removed.  You can see that this movement has a special arbor for the mainspring and it rides in jewels in the ratchet wheel and the main plate - that accounts for two of the 21 jewels. 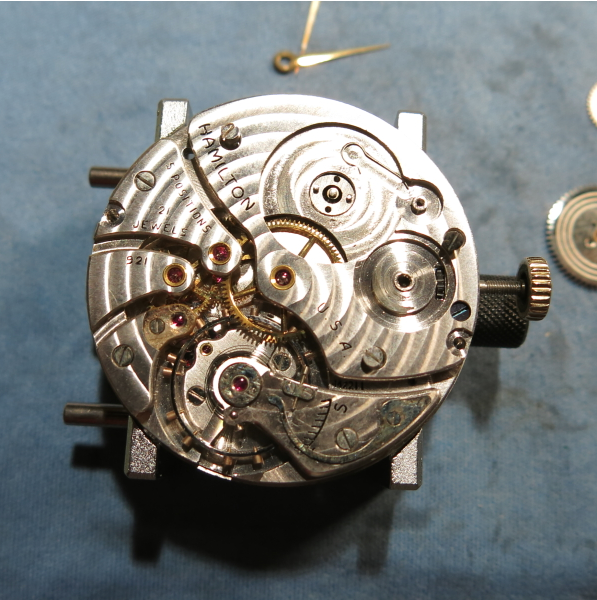 The barrel bridge and train bridge come off just like any other movement.   Once they're off, access to the mainspring barrel is obtained and this barrel is different than most other barrels you come across.  The reason is it opens from the opposite side so it appears like the mainspring is wound in the other direction… you're really just looking at it from the other side.  You can also see below that the arbor is actually two pieces and one of them is still inside the barrel.  The post in the center is a part of the barrel and not removable. 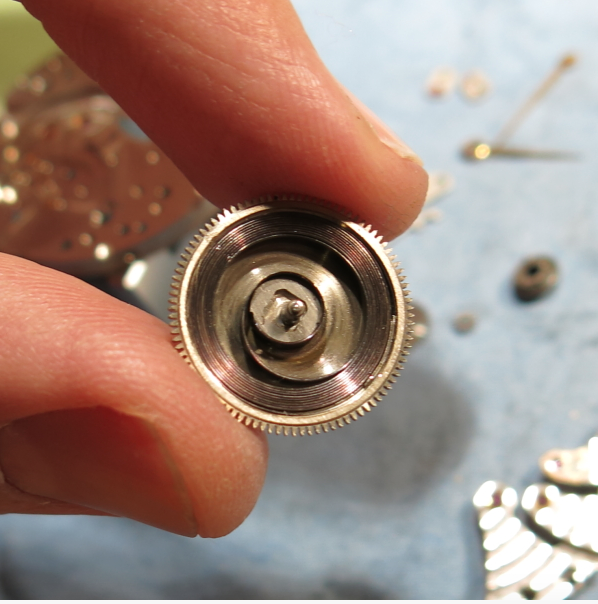 Here's the spring outside of the barrel and you can see that it's fairly "set" and has lost a lot of it's strength. 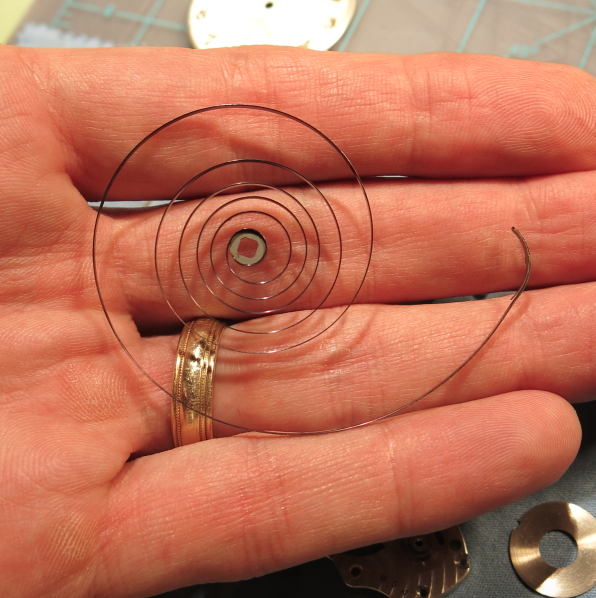 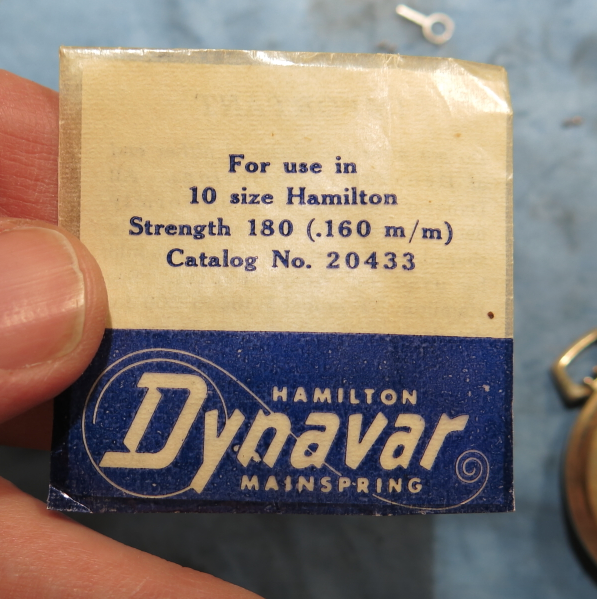 Here's the two springs side by side - you can see how much different a fresh mainspring is from a set mainspring. 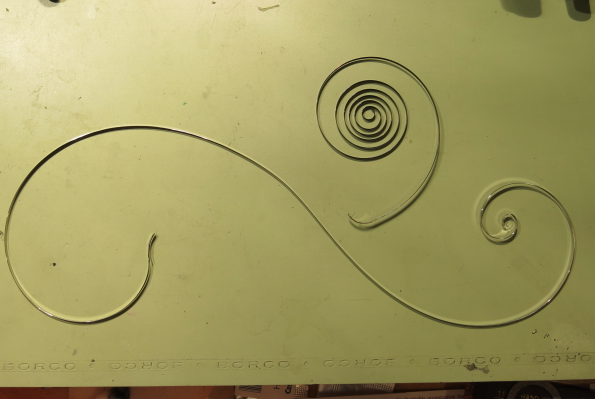 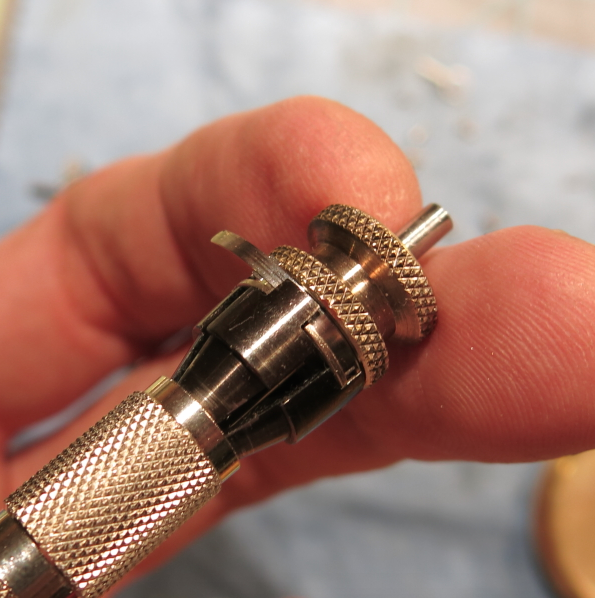 Here it is ready to go into the barrel. 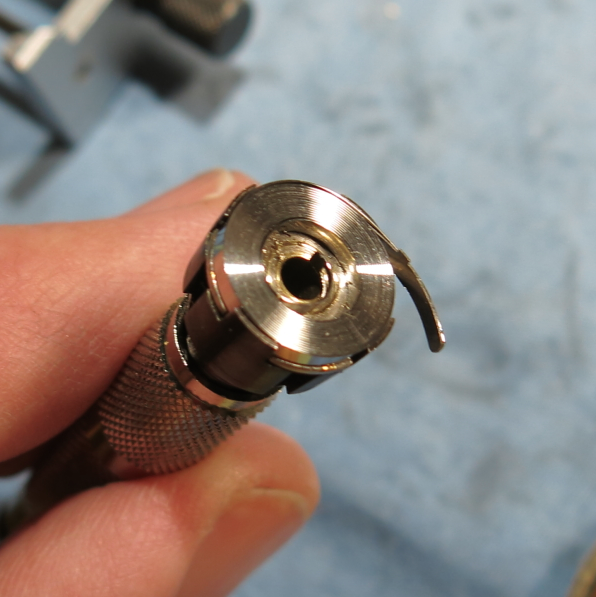 Unfortunately, my little winder wouldn't load the spring into the barrel - the barrel was too wide for the tool and the spring just popped out.  So I'll have to turn to my "big" mainspring winder.   This one is more challenging to use but handles really big pocket watch springs with ease. 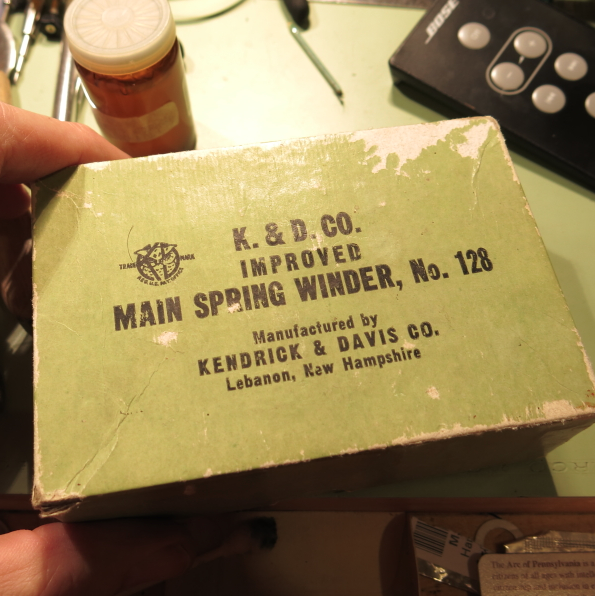 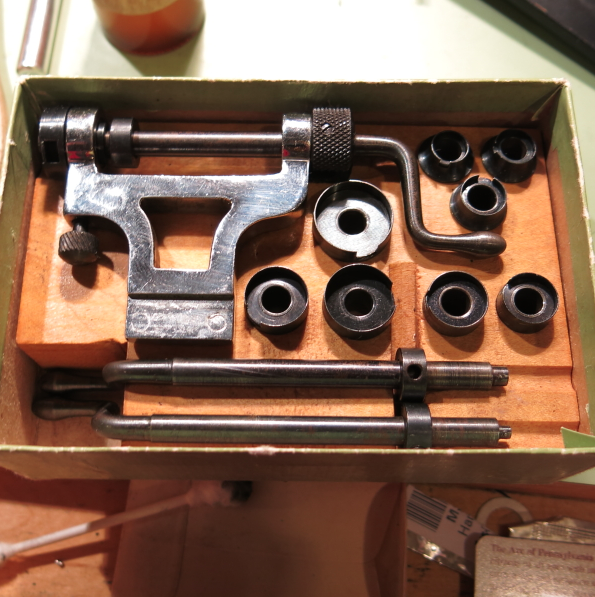 And voila - the new mainspring is installed and we're back in business. 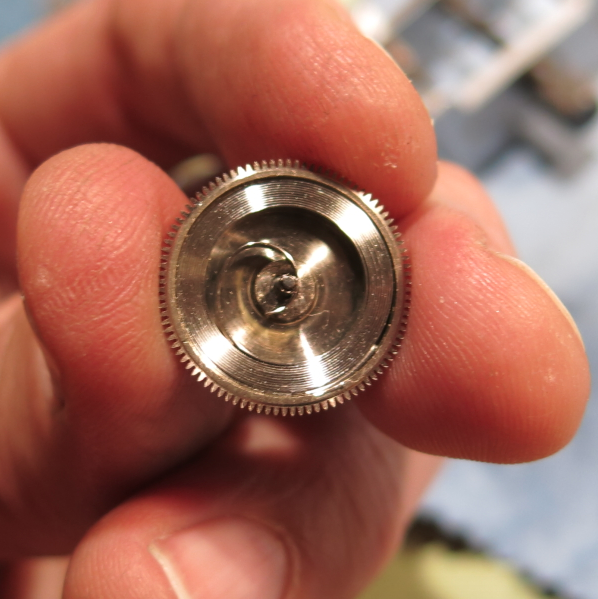 All the parts are cleaned, dried and lubricated when they go back together.  This movement really sparkles in comparison to when it was dirty. 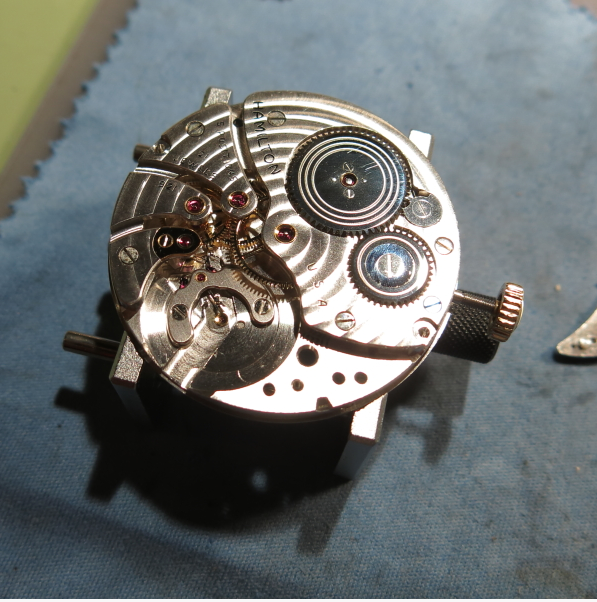 I happened to have a 917 with a bad balance so I removed it's regulator and will install it on this 921's balance cock.  Here you can see the two prongs that hold the hairspring and effectively control the length of the hairspring - and thereby the rate that it vibrates.  Without a regulator the watch would be limited only by the hairspring stud and would run too slow. 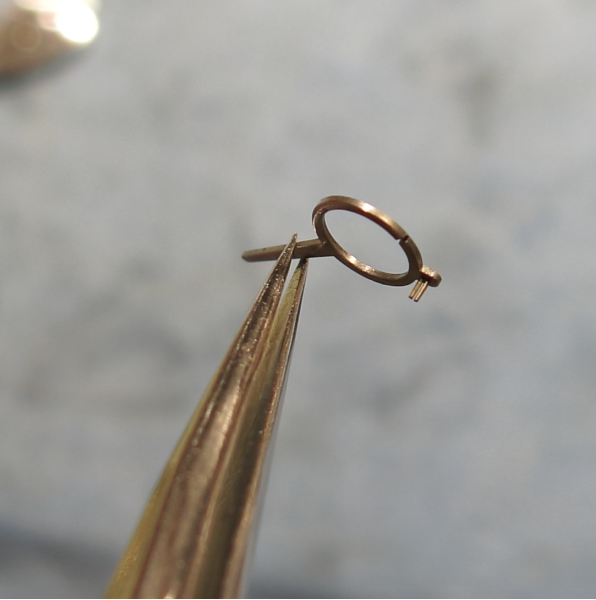 The freshly cleaned balance is ready to go back onto the balance cock.  This is very tricky business and the hairspring is very delicate.  It's literally the heartbeat of the watch and if you bend it out of shape the watch will not run well. 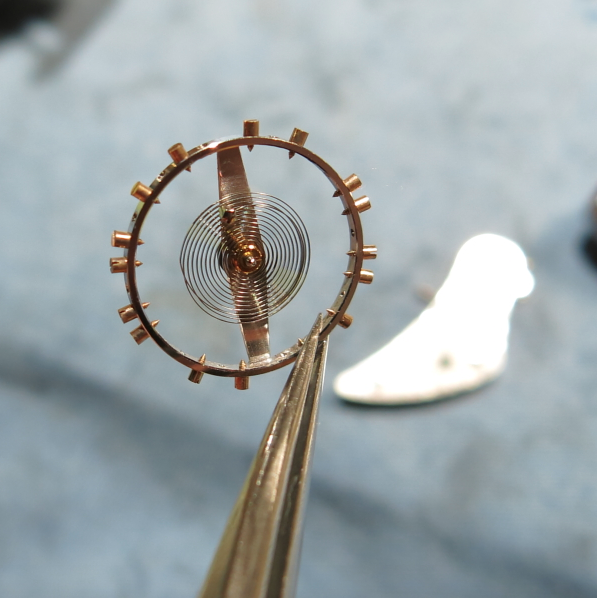 Success - the balance assembly is reinstalled and the watch is ticking away.  It is off to the timer next. 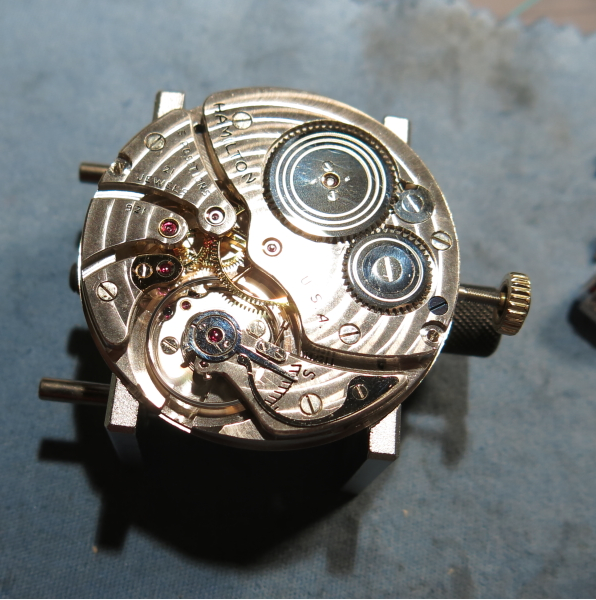 Well, it's running about two minutes slow per day… I can do better than that. 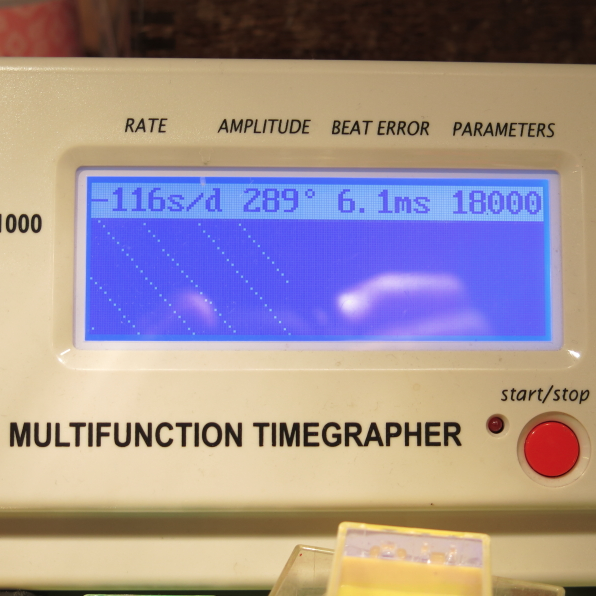 The micro regulator has a small screw that you adjust to move the regulator from side to side.  I just need to screw it "in" so the regulator moves to the left, toward the "fast" side. 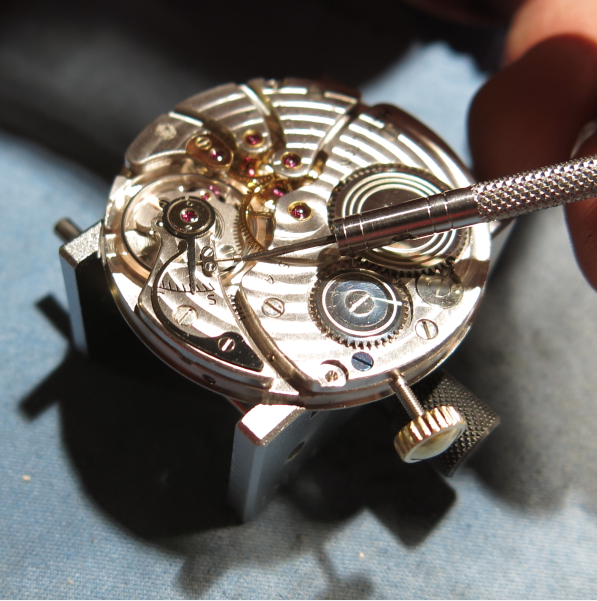 Alright, 2 seconds fast per day… that's more like it.  The beat error of 6.6 is a bit higher than I usually like to see but adjusting it is a pain and would require removing the balance again.  That's the equivalent of playing with fire, so I'll leave it as is.  A high beat error can cause a watch to stop a little earlier than a watch with a low beat error when the mainspring unwinds but other than that it's not a big deal. 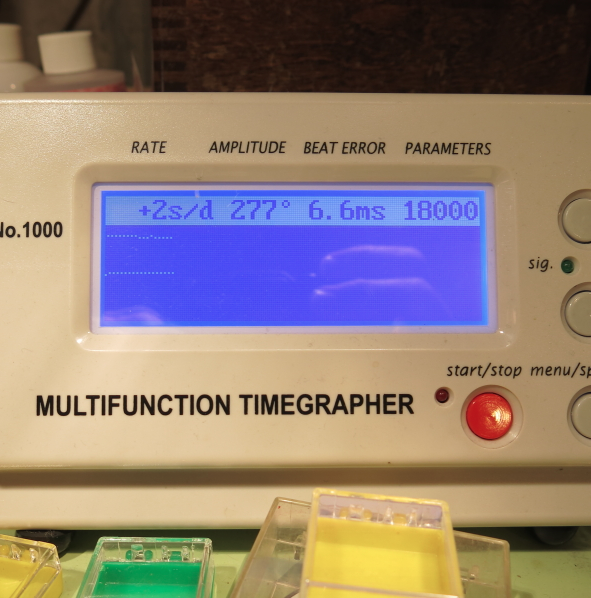 I happened to have a nicer 10S case so I cased this movement in it.  Technically this is no longer a Hardy - but I like it better this way.  Check out how nice and bright this movement looks now! 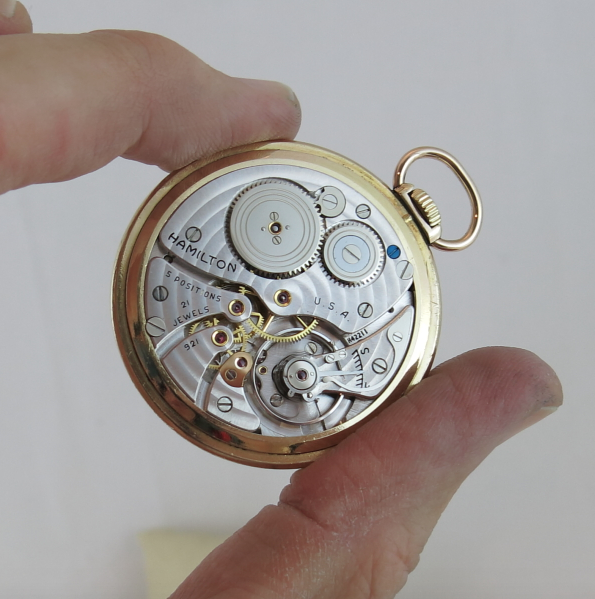 And here it is from the front… as you can see, this case is engraved and more decorative than the Hardy.  It's a very sharp looking dress watch now. 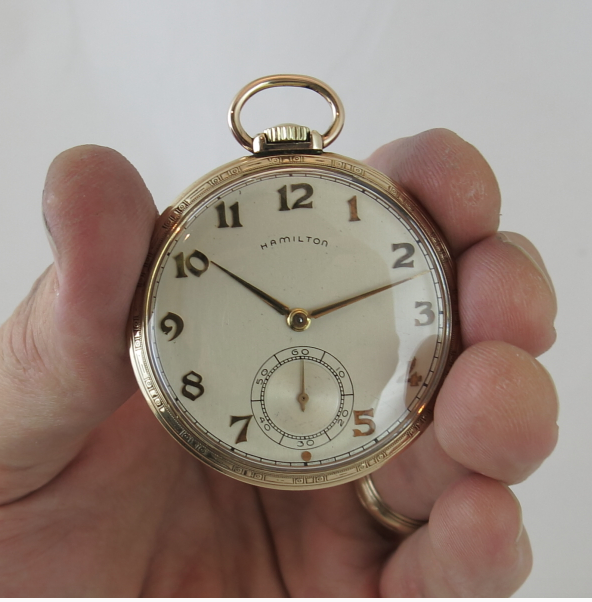