By 1948 Hamilton's production of civilian models was back in full swing and lots of new models were being introduced to meet the growing demands of America's post-war economy.  One of the new models introduced was the Barton. 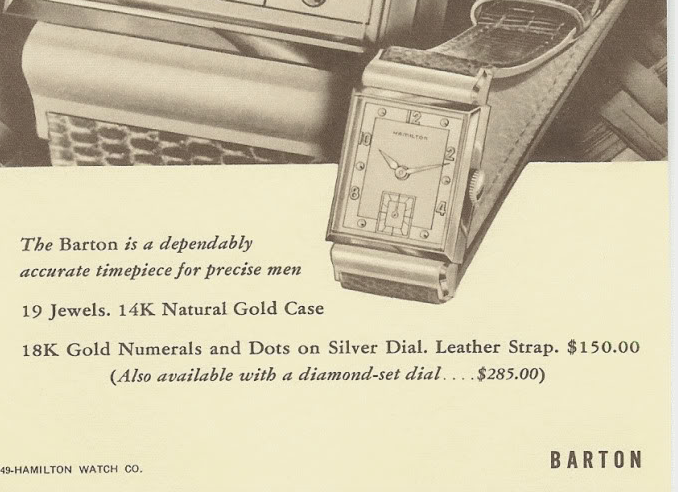 The Barton looks very similar to an earlier model from 1941 called the Gordon.  Both models are solid gold, except the Gordon is 18K yellow or white gold while the Barton is 14K yellow only.  The two-tone sterling silver dials are similar as well - but the Barton features solid gold numerals and markers while the Gordon features all markers (both models had optional diamond dials too).

The Barton was produced from 1948 through 1952 and the Gordon was available from 1941 through 1953 - so they were both available at the same time for a few years.

Here's the catalog image for the Gordon. 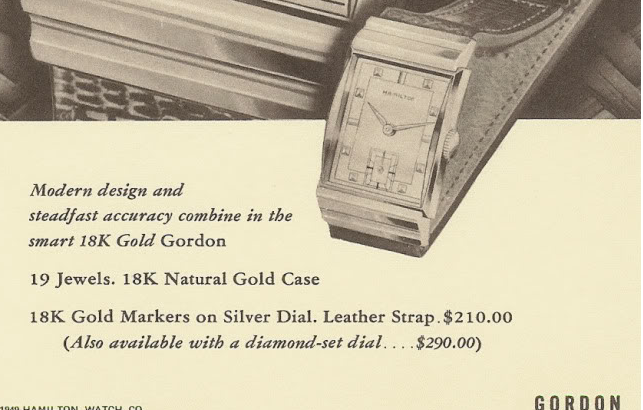 The Barton case features "semi-hidden lugs" and gives the appearance that you can't tell from the front how the strap attaches.  The Gordon's lugs are truly hidden.

I recently received a Barton in need of some TLC.  It was not working and had several issues to rectify.   In addition to not running, the crown was chewed up and bent and it "crunched" when winding - a sure sign something related to the clutch wheel, winding pinion or winding wheel is amiss. 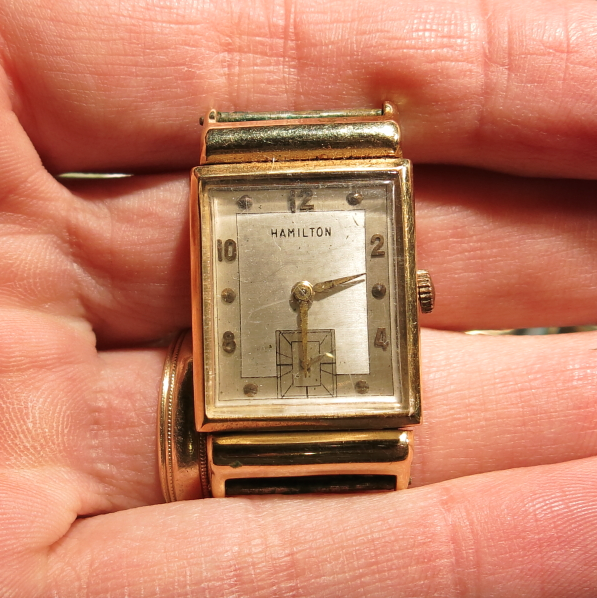 Here's a shot of the back of the lugs and you can see that they are actually attached to the case via a hinge at each end.  That means the lugs move but not too much, just enough to contour to the wrist a little.  With the spring bars in place you can see they're not quite hidden afterall. 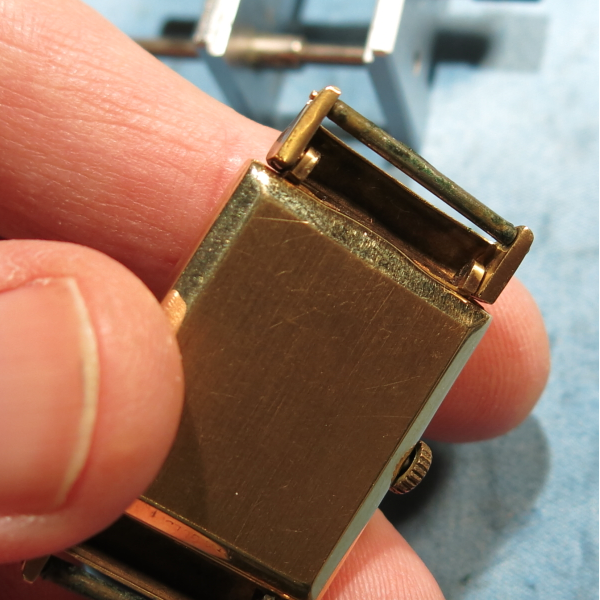 One of the good tips a collector eventually picks up is to spot a redial by looking at the printing of the Hamilton logo.  This dial doesn't look terrible but the logo is not correct.  That's a sure sign the dial was redone, albeit quite a while ago based on the general condition.  The hands have lost a lot of their gilt as well.  Although the numerals and dots are solid gold, the hands are steel with a gilt finish. 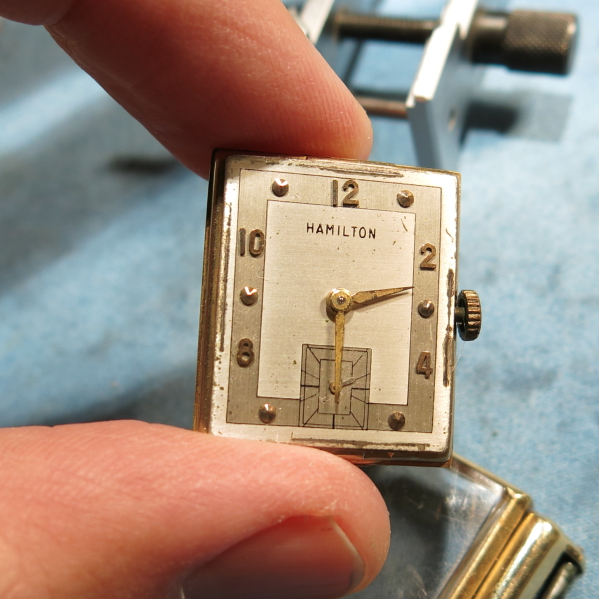 Looking at the reverse, this watch has a 982 movement.  A 982 is virtually identical to the 982M but the 982 used in 14K gold filled cases so it's not original to this model.  I suspect something must have happened to the original 982M and it was easier to put a 982 in than to repair the original movement.

The movement is totally gummed up and nothing moves.  That can be a good sign, as hopefully a cleaning is all that's needed.  I'd much rather see that than a wobbly balance. 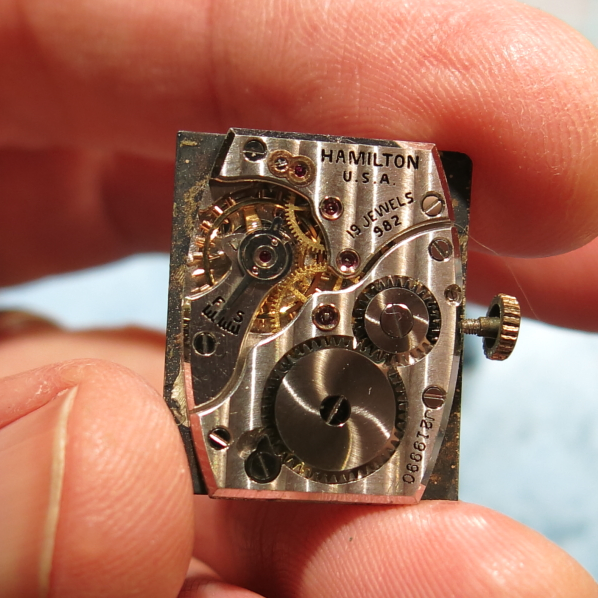 The inside of the case back reveals at least a dozen watchmakers' marks.  This was well maintained. 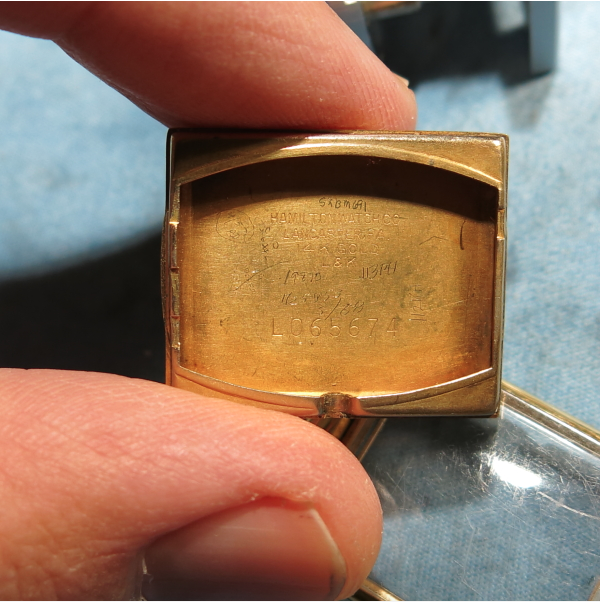 It also already has a white alloy mainspring installed, so just some cleaning and relubing is all that's needed. 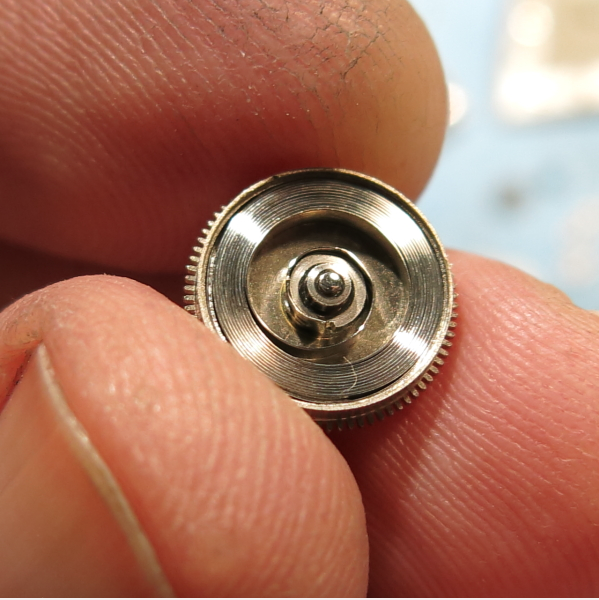 Well, it took quite of bit of cleaning but eventually the movement came back to life.  A little tweaking to the regulator will slow it down a little more. 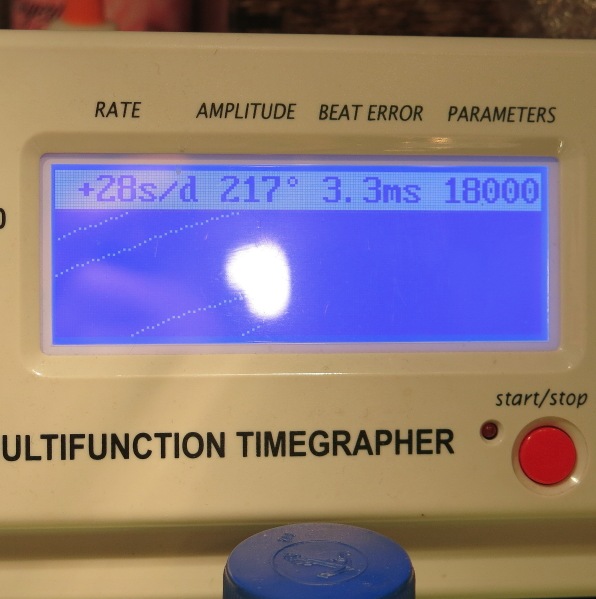 And here it is on it's "pillow shot" with a nice croc strap..  I installed a new stem and crown which goes perfectly with this case and looks way better than the bent one that was on there before.  The case cleaned up very nicely but there's a little wear to the bezel near the right corner of the crystal.  That could just be from normal wear, as the crystal on there now is a very thick acrylic replacement.  It's possible the original crystal allowed some wear to that lower right corner from a shirt sleeve. 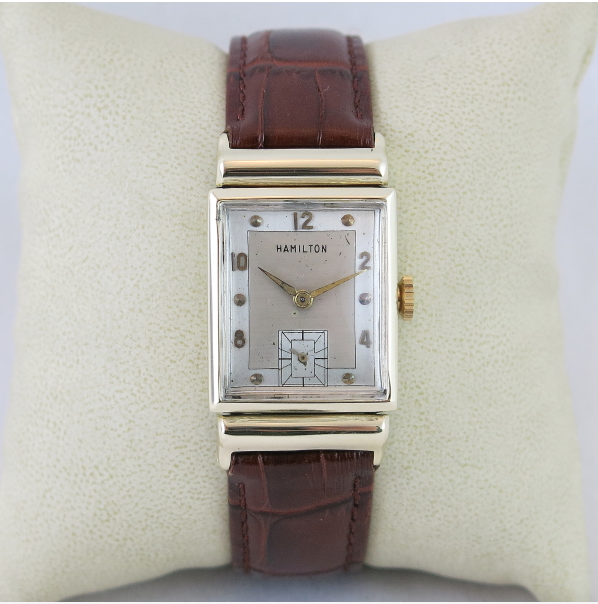 Still, it's a sharp looking watch now that it's all cleaned up and running.  I think after a new crystal is installed it will look great, even if the Hamilton font is a little off. 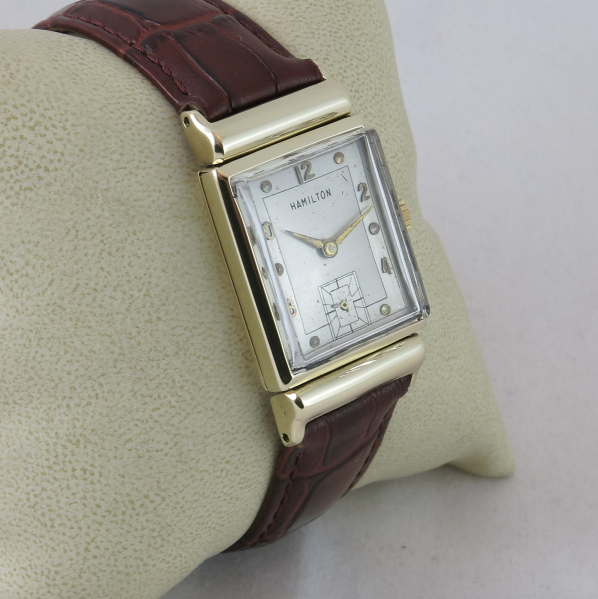 Made the decision to redo the dial so along with a new glass crystal and some new hands, this Barton has been returned to it's former full glory.  Compare the picture below to the picture above… a new dial sure makes quite a difference! 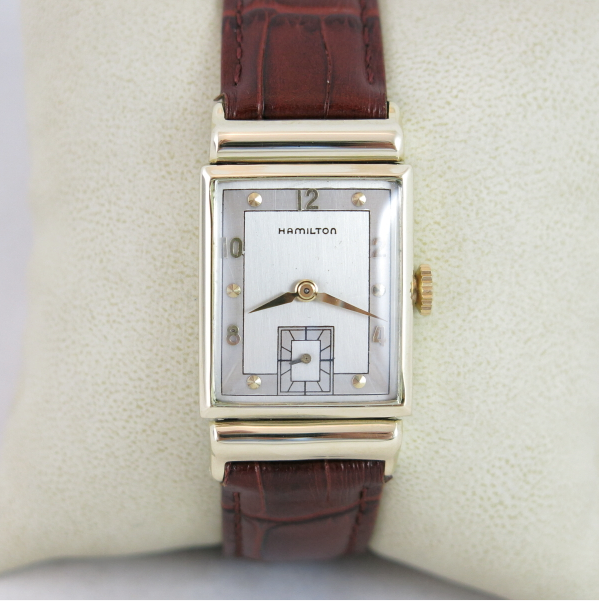