Back in June I did a post on the 1961 Talbot.  I mentioned that it was the second model to bear that name.  The first Talbot was produced for one year only - 1937.

The Talbot came in a 14K yellow gold filled case with a choice of three different dials... an applied gold numeral dial, an applied gold marker dial or a black inlaid enamel dial.

Inside the case you should find a 17 jewel 980 movement.

Being made for only one year, Talbots are fairly uncommon but I wouldn't call them rare.  The real challenge with the 1937 Talbot is to find one without wear-through on the bezel, especially in the corners by the crystal.  A little wear through is very typical.

I recently picked up a Talbot project watch.  It turned out to be a little bit of a pig in a poke - as I will detail below.  As received, it looked like it would be a pretty typical project.  You can see the corners of the bezel are worn but it's really hard to find a Talbot that isn't.  If you do see one - I'll bet it's been replated. 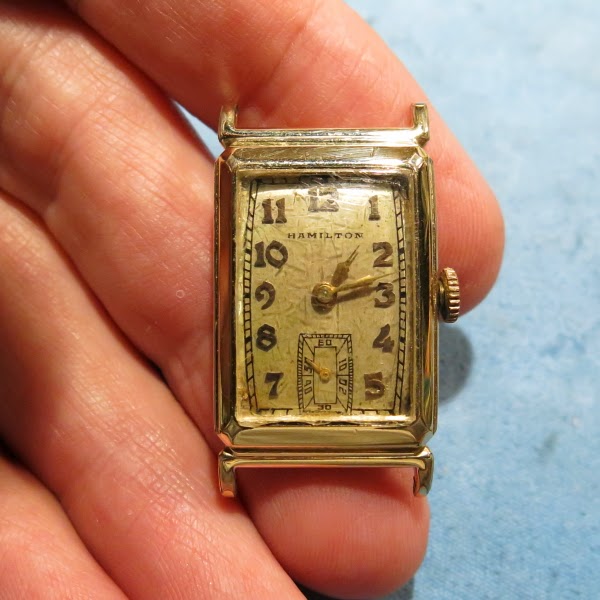 The crystal on my project Talbot will definitely need to be replaced.  With the bezel out of the way, you can tell the dial is in fair condition.  It's an old refinish but doesn't look too bad - a little cleaning will help it look even better.

The style of hands on the watch are called "moderne" - they are rather uncommon and a few models call for them but the catalog image of the Talbot appears to use lozenge style. 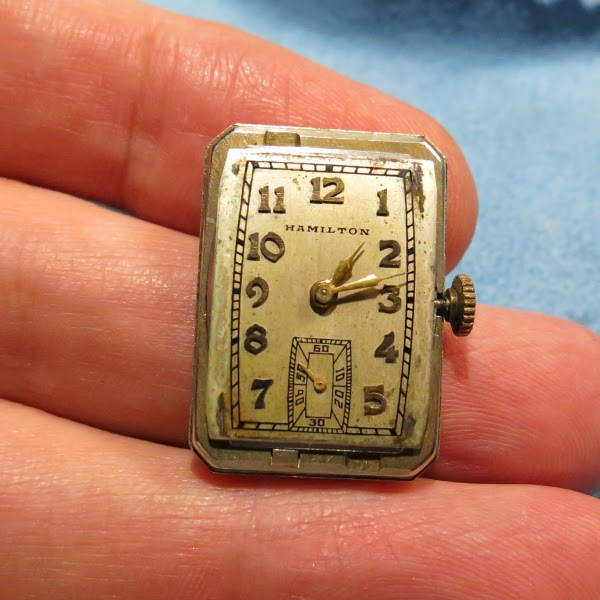 The first part of my "pig in a poke" story is although the watch has a 17 jewel 980 movement.  The serial number dates it to 1949 - so it's obviously not original to the Talbot.  I happen to have a spare 980 movement that dates to 1936 - which is much more appropriate for a Talbot and I'll just use that one instead. 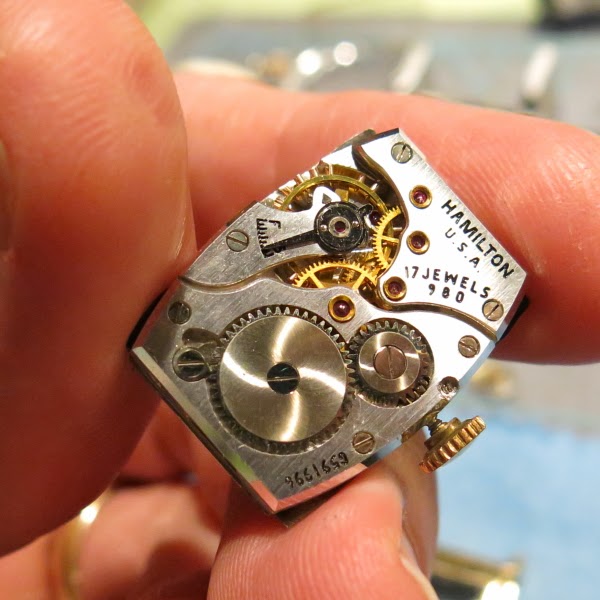 I find watch cases from the 1930's to be interesting.  They sometimes don't say "Hamilton Watch Co" inside, although this one does.  But the printing and font for the lettering is unusual.  This might be the earliest use of a Star Watch Case that I've seen as well. 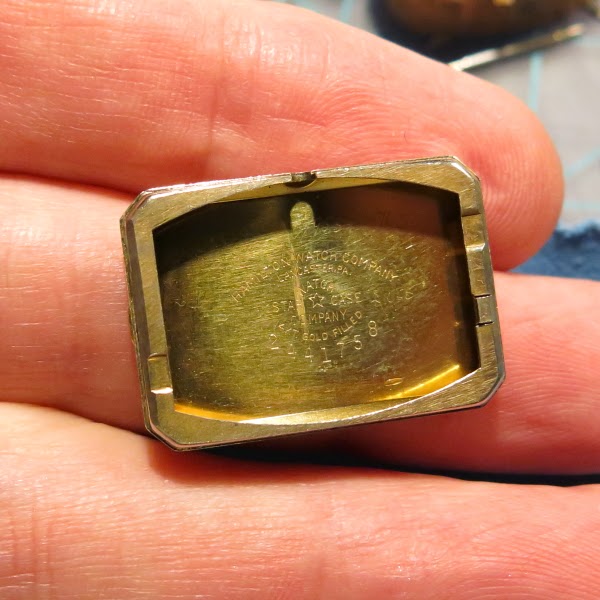 My spare 980 is obviously an older example.  Although 90% of the parts are identical, there are some subtle differences in the grade that evolved over time. 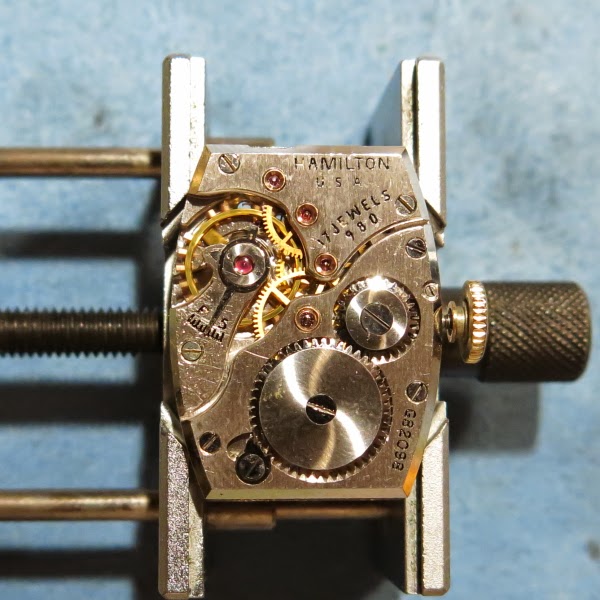 One of the main differences is on the front.  The set bridge on early 980's and 982's has two pieces (where my tweezers are pointing).  After 1936/37 the 14/0 movements got a one piece set bridge.  Also, the cap jewel setting over the balance wheel only has one screw, while later 980's have a two-screw cap jewel setting. 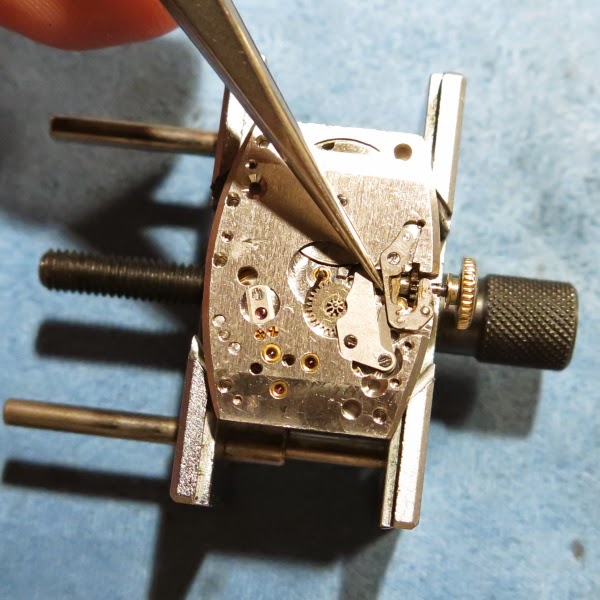 Regardless of it's physical appearance, this older 980 is still running great. 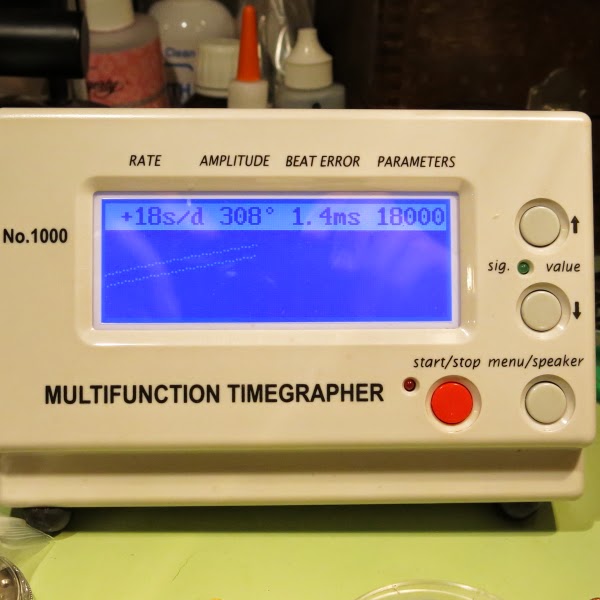 I'm going to replace the plastic crystal in the bezel with a new old stock glass version.  Don't be alarmed by the Elgin label - apparently there's a similar Elgin model out there with the same sized bezel opening. 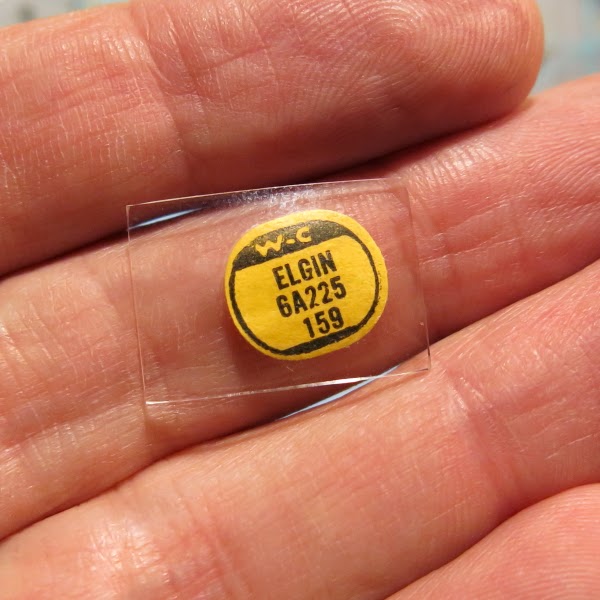 Well, here's the finished project, paired with a NOS vintage strap.  Now you can clearly see the second part of my pig in a poke purchase... the dial isn't correct for a Talbot! 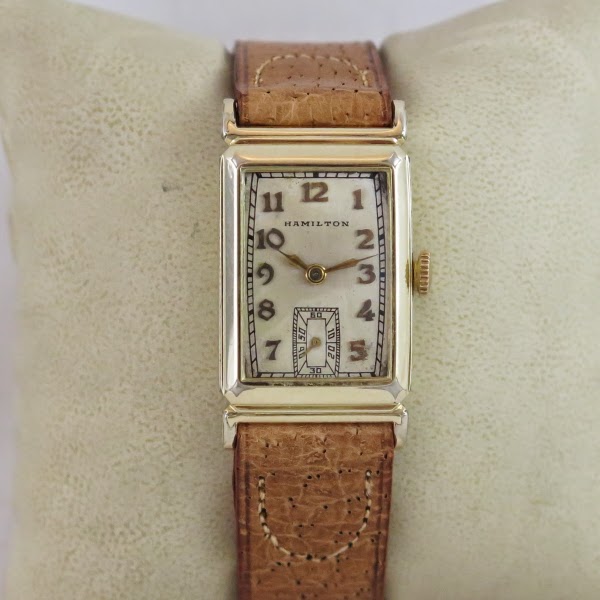 As luck would have it, the Talbot shares a dial with the Nelson and the Bartley from the same time period.  I happened to have a spare Nelson dial and although 90% of it looks fantastic, there was some corrosion around the 5 marker - so I'll probably send the dial out to be redone.

In the meantime, you can now see what a correct Talbot ought to look like.  Oops!  I lied.  The hands still aren't totally correct - but you're going to have to cut me some slack on that one.  These moderne hands are just as hard to come by as lozenge hands so I'm happy to keep them. 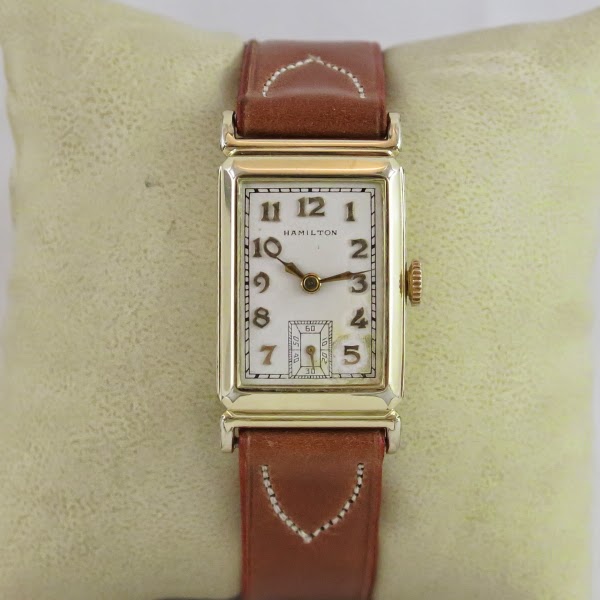 And here's a wrist shot of the inlaid enamel Talbot, courtesy of fellow collector, Tom Diss.  I absolutely love this dial for some reason.  I think it's because the fonts used remind me of an old time "wanted" poster.  You can see that even Tom's example has a worn bezel - it goes with the territory, I guess.