Hamilton was a little late to the stainless steel game in wrist watches.  Hamilton first introduced stainless steel into their lineup in 1941 with the Lexington.  I guess stainless steel was perceived as being "cheap" so Hamilton only used 10K gold filled cases or better.  In fact, if you see a Hamilton watch with a 987 movement in a rolled gold case - you know it's not an authentic model.

But the 1950's was a different story.  Hamilton had to compete in a very difficult market with European makers that had very low price points since their economies were still recovering from WWII and labor costs were so low.  Hamilton introduced lots of watches with stainless steel - even watches with solid 18K gold bezels and stainless steel backs!

One of the "styled in stainless" models was the 1955 Surf.  It was produced for three years. 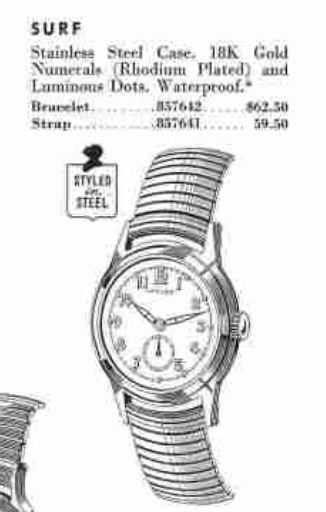 Originally, the 1955 model came with a rhodium-plated, applied gold numeral dial.  The numbers are solid 18K yellow gold but plated with rhodium to appear silver.  For some reason (probably costs), the dial on the Surf was changed to a different layout and featured embossed numerals and markers with a pearled-track.  It stayed that way through 1957 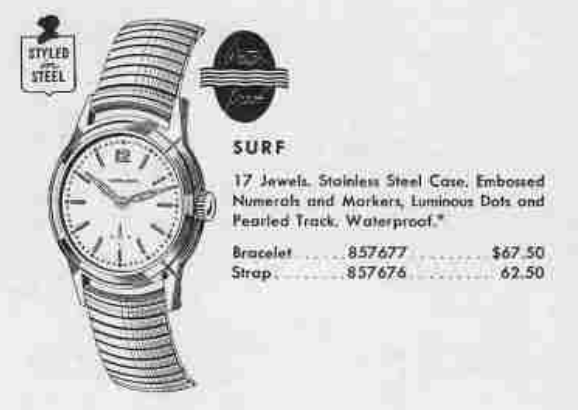 Behind the dial you will find a US-made 8/0 sized movement - either a 747 (in the 1955 model) or a 730.  The 730 is a shock-jeweled upgrade to the 747 chassis.  It shares most of the same parts with the 747 - the principle difference is the balance jewels are shock protected to spare the delicate balance staff pivots from drops and banging into door jambs.

A friend of mine recently picked up a Surf and asked me to give it some love.  As received, you can tell right away that something is amiss... what's with the CLD (sealed) on the dial?  It's pretty obvious that this dial is an old, and incorrect, refinish. 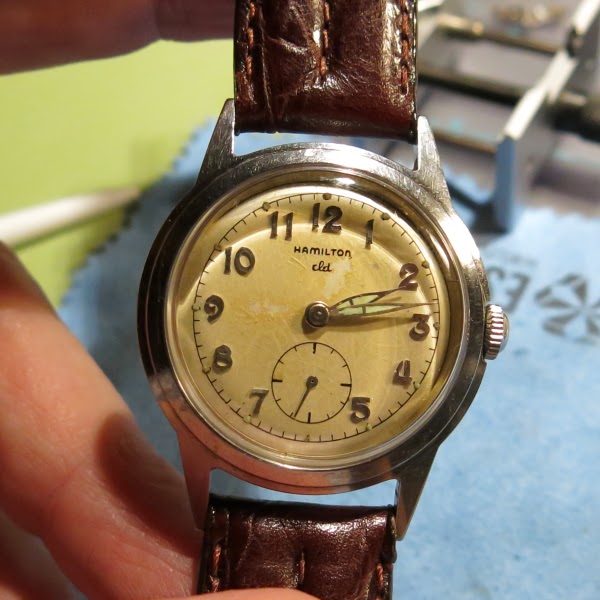 The back of the Surf is comprised of a cover and a threaded ring that holds the cover down over a gasket. 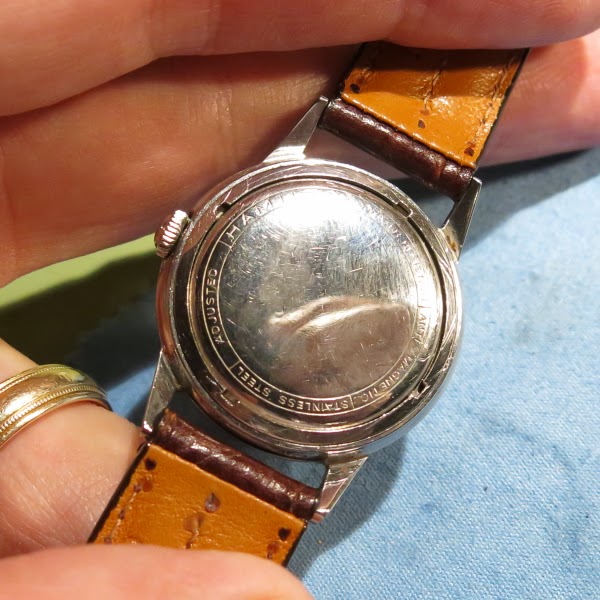 This watch has a 747 - which isn't a surprise since it has the AGN dial on top.  You can tell it's one of the later 747's too - because there is no serial number stamped on the balance bridge. 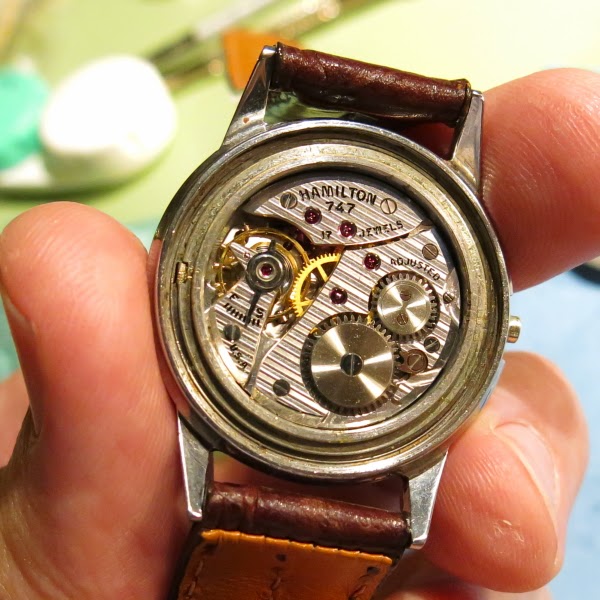 Other than the dial pattern being off, the rest of the front of the watch is fine.  The hands can be relumed when the dial gets refinished again. 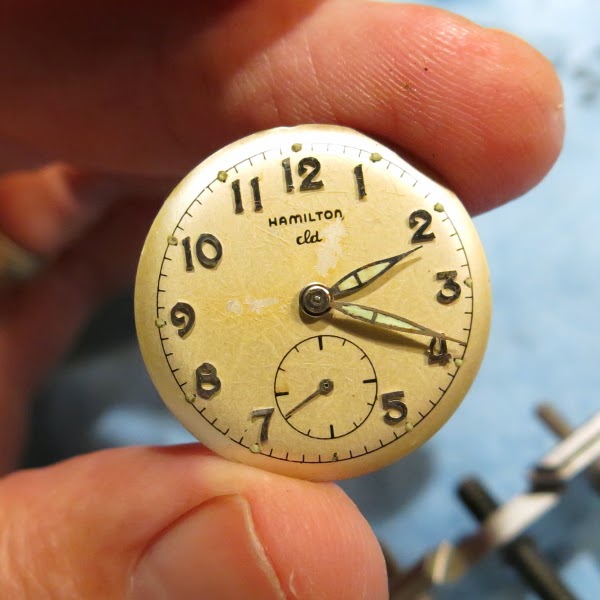 As if the CLD wasn't a good enough clue, the scratches on the back of the dial are a clear indicator that the dial has been redone. 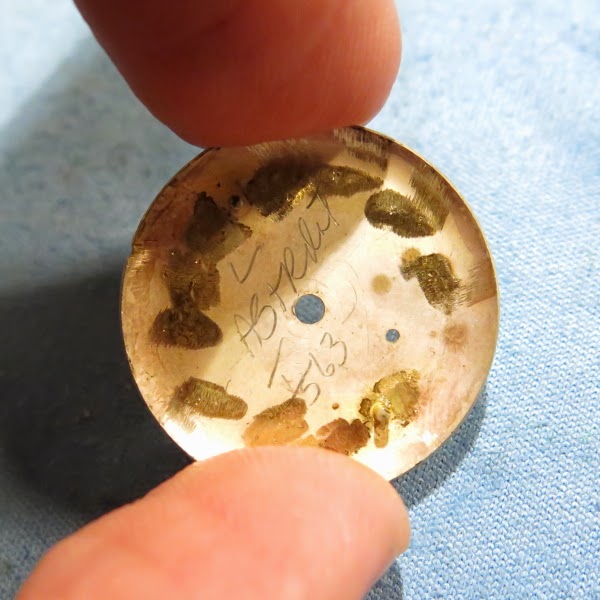 The movement is disassembled, cleaned and oiled and goes onto the timer. 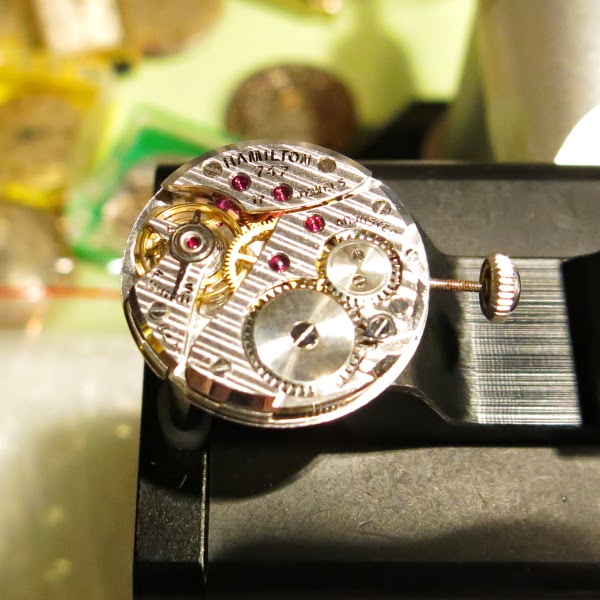 A little tweaking to the regulator brings the beat rate in line.  The beat error of 3.5ms is at the high end of my spec limit.  If it was easier to adjust I would try to reduce it.  However, this style of balance is a challenge to adjust the beat error and I'd risk screwing up an otherwise fine balance.  A higher beat error really just means the watch will stop a little earlier than a watch with a lower beat error.  So it will have to do - as is. 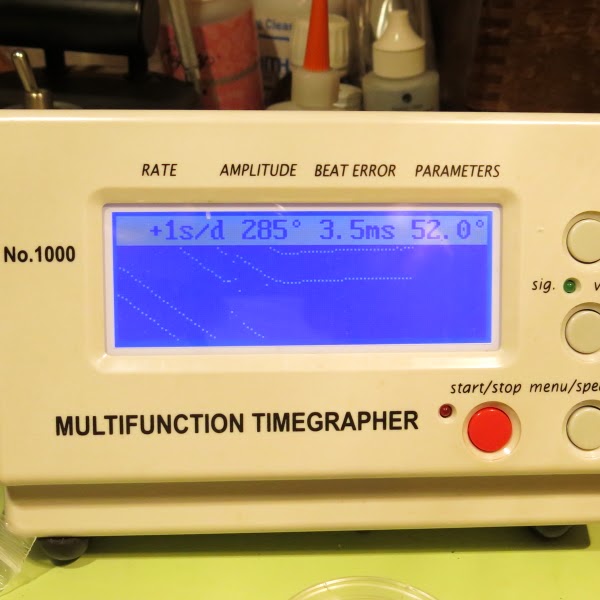 Everything goes back into the case.  The Surf features a reflector ring in addition to the crystal - so a lot of thought went into the aesthetics of the watch's design.  The crappy finish on the dial though is a distraction from the watch - so I'll get the dial and hands redone. 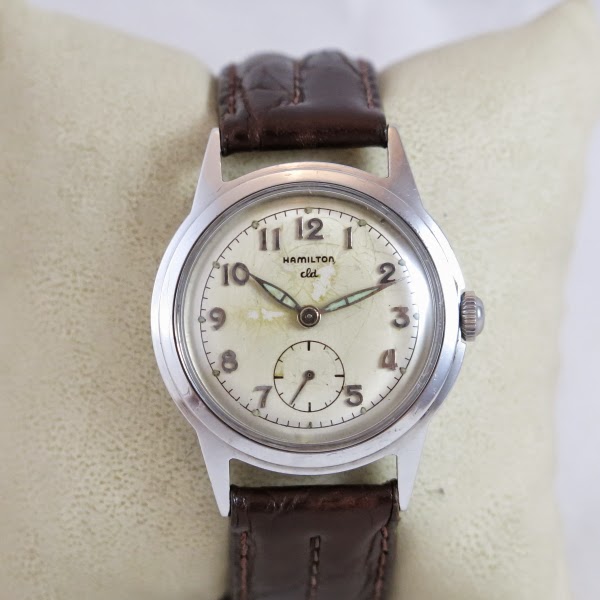 It turns out, there isn't an exact match for the original AGN pattern for the Surf so I had to go with something that was a close enough match.  The main difference is in the seconds sub-register and the luminous dots at the hour markers.  I think it looks much better this way though, than with that CLD in the middle and pealing lacquer.  This style of luminous leaf hands are very funny when they're set to the typical presentation time of 10:12... they remind me of the Chesire Cat peaking out from the dial. 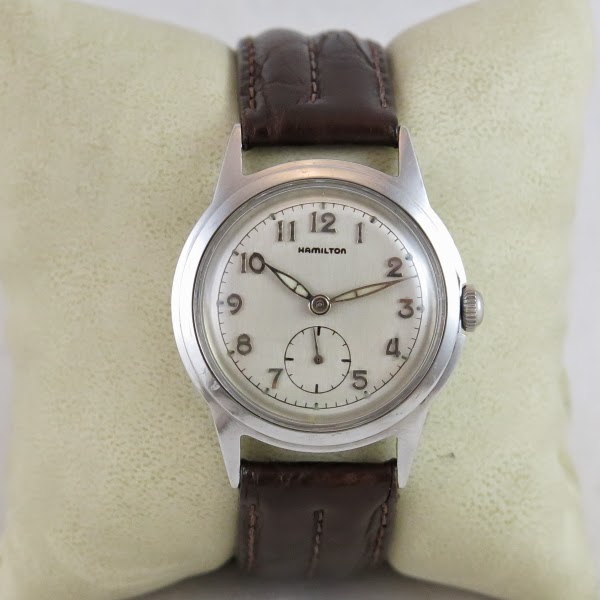 And just for comparison's sake, here's a wrist shot of a Surf that I used to have.  It has the correct dial pattern for the 1955 version of the Surf.  Notice the seconds register is slightly different. 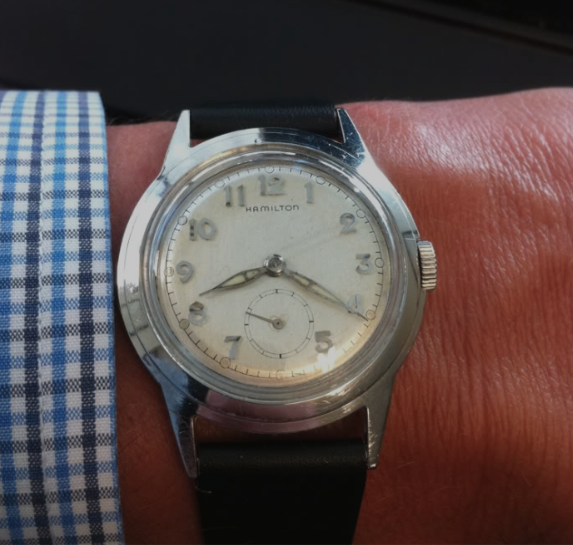 Here's an example of the marker-dial version of the Surf.  This model may not be the most interesting out there but it sure is uncommon nonetheless. 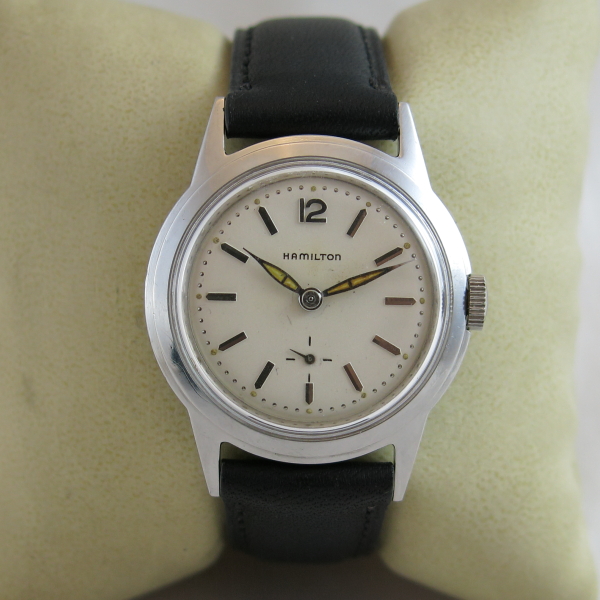