Hamilton made some models for the European market only, it seems.  Although sometimes the same, or similar models were also released in the USA.  One of the models that comes to mind is the 1964 Pan Europ.  In stainless steel, it's also called the Dateline A-579.

The Pan Europ 64017-4 comes in a yellow rolled gold plated case with a screw on stainless steel back.  Inside is a Hamilton 64A - a 21 jewel automatic movement with a date complication.  It's based on  an ETA 2452.  It's very similar to the Hamilton 689 - which is the non-date version and based on the ETA 2451.  The extra 4 jewels over the 17 jewel 689 are in the oscillating weight gear train.

The color of the "yellow" model is sort of a greenish yellow - this is similar to other European watches I've seen.  The yellow is not quite as warm a yellow as other yellow gold models you typically see.

Pan Europ models are very popular - I don't know why that is... maybe it's the date at 6 but they routinely sell well.

I recently scored a Pan Europe that the seller said "just needs to be cleaned".  I didn't look to closely at it other than to make sure the dial was in good shape.

As received, the dial looked okay but the case was pretty beat up. 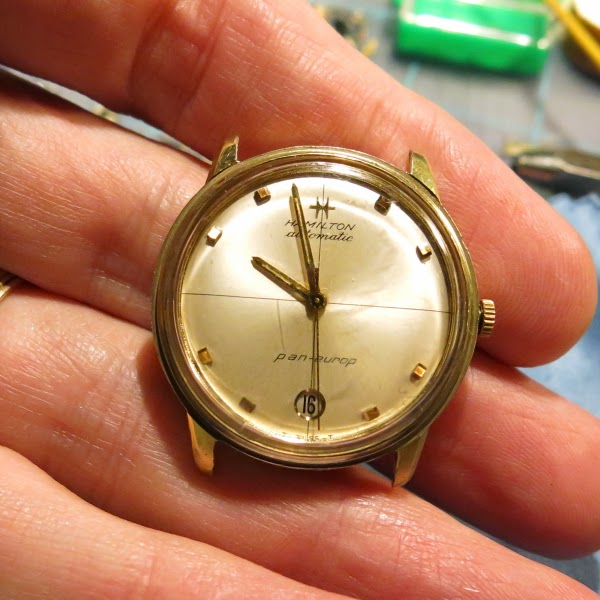 The back of the watch has been woefully abused by someone with cheap tools - as it's all gouged up by someone trying to open it.  The back of the Pan Europ model has a Pegasus on the back - it looks a lot like some vintage Omega Seamasters I've seen - maybe that's another reason why they tend to sell so well? 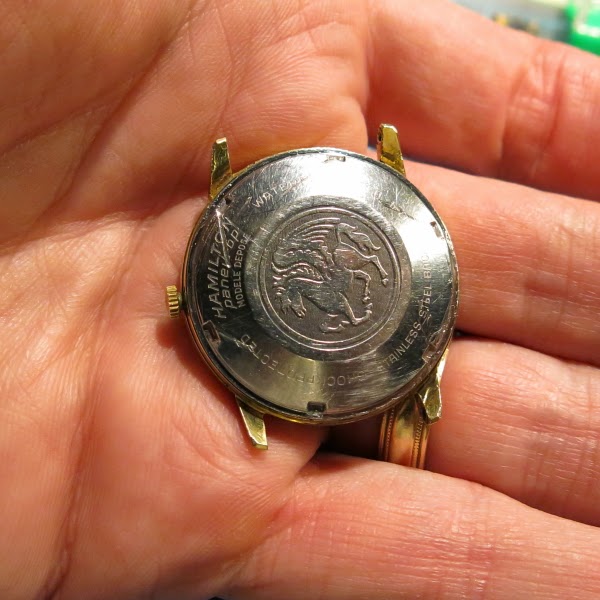 The movement does need to be cleaned, but the seller was pretty much full of crap.  This watch is missing the jewels under the KIF shock protector on the balance.  You could clean this watch until the cows came home but without balance jewels it won't run. 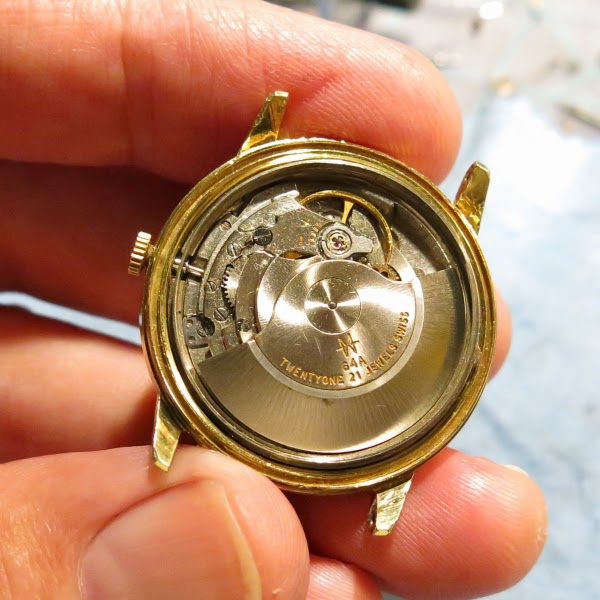 The dial-side of the pillar plate looks like other calendar movements I've seen like the Dateline S-575.  I need to take the calendar wheel off before cleaning this movement and that means I need to take off a lot of little, spring-loaded pieces. 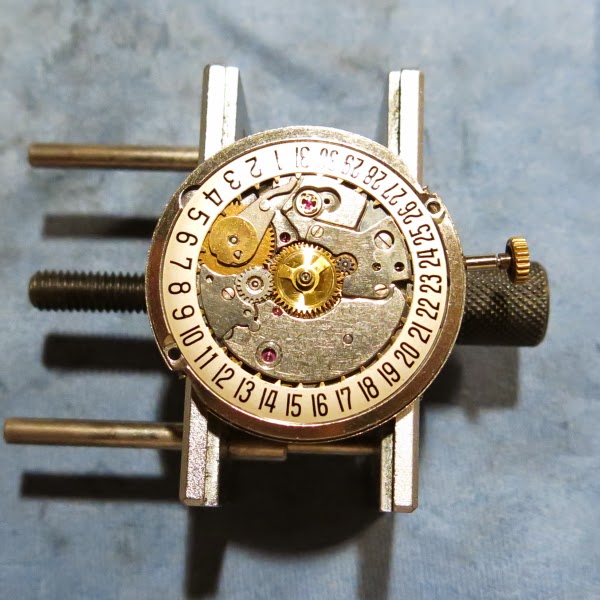 Here's an example of some of the tiny pieces that are sure to get lost if you're not super careful. 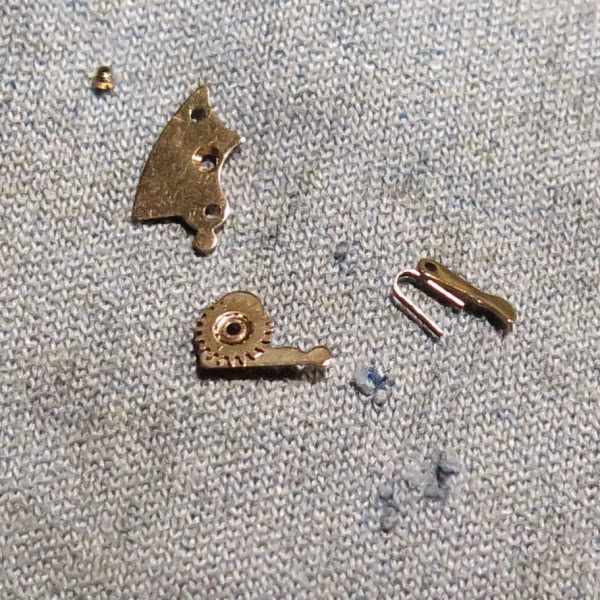 The dial-side is starting to look like a normal, non-date movement now. 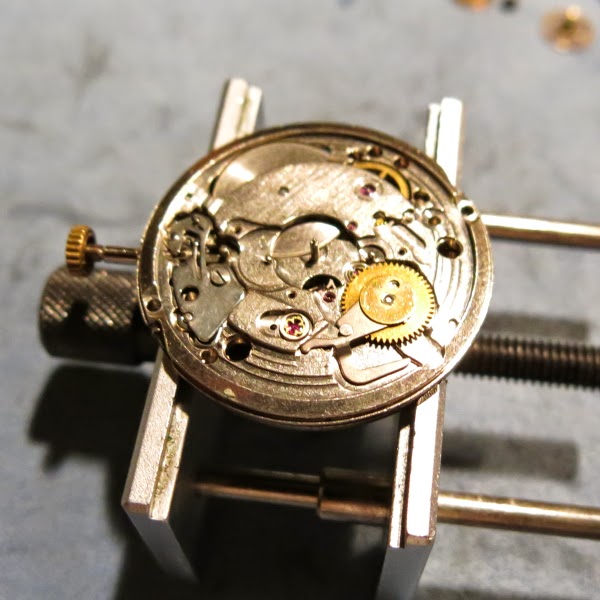 Two screws hold the rotor (oscillating weight) on.  The screw in the middle of the carrier will remove the rotor and then all the little gears can come out. 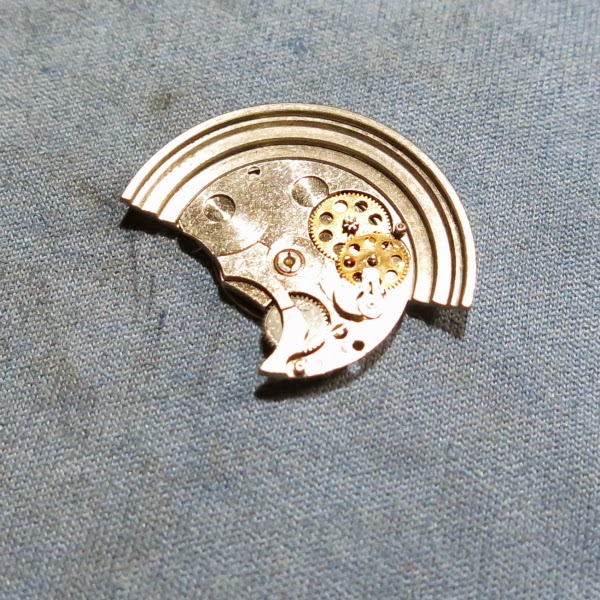 Without the rotor, the movement looks just like other manual-winding ETA movements.  If you've got good eyes you might be able to spot the balance jewel under the balance wheel, on the left.  If I had a good Kif shock spring to install, I could probably reinstall the jewels. 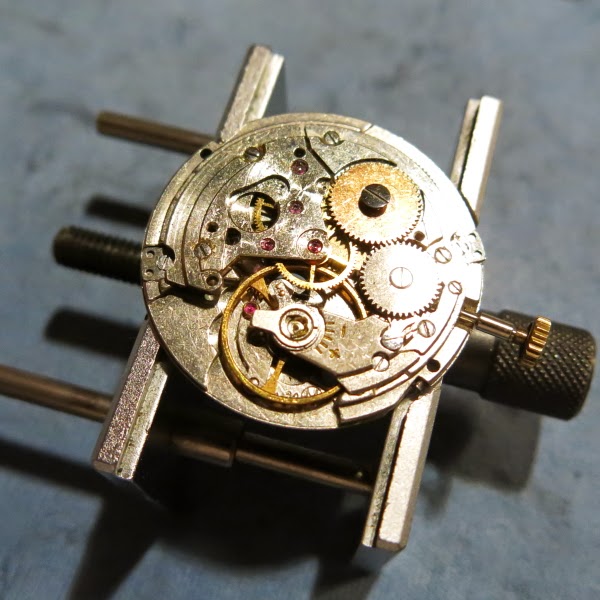 While all the parts are being cleaned, I'll clean the case and prep the crystal to go back in.  This crystal is a special style with a gold-colored reflector ring. 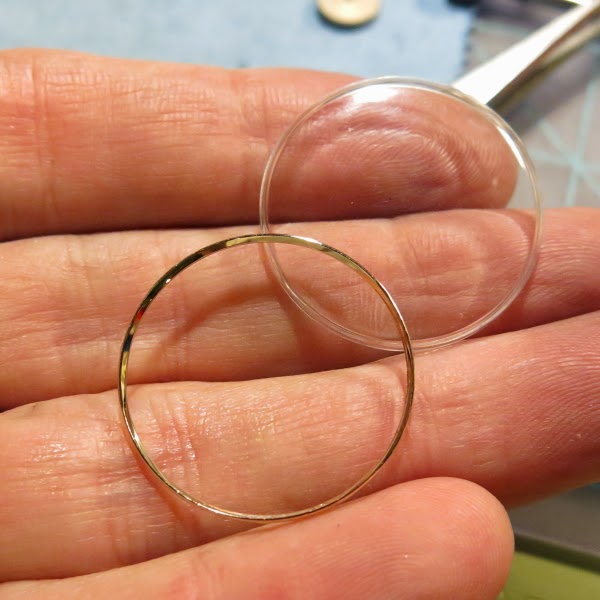 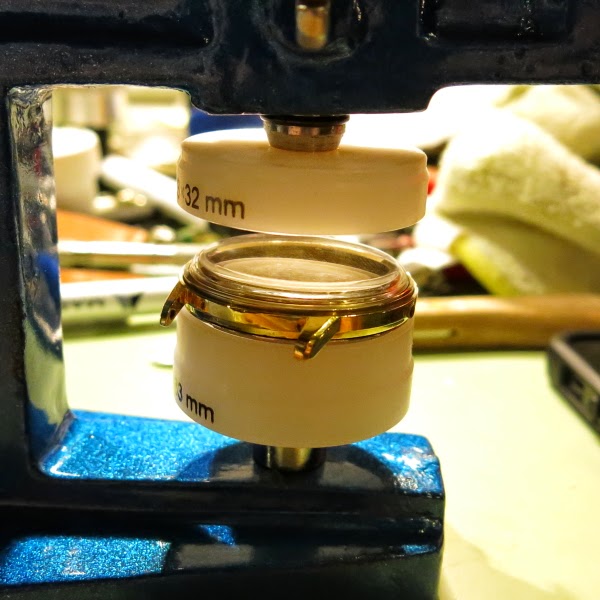 I swapped a balance cock from a spare 689 so the movement is now back to running condition. 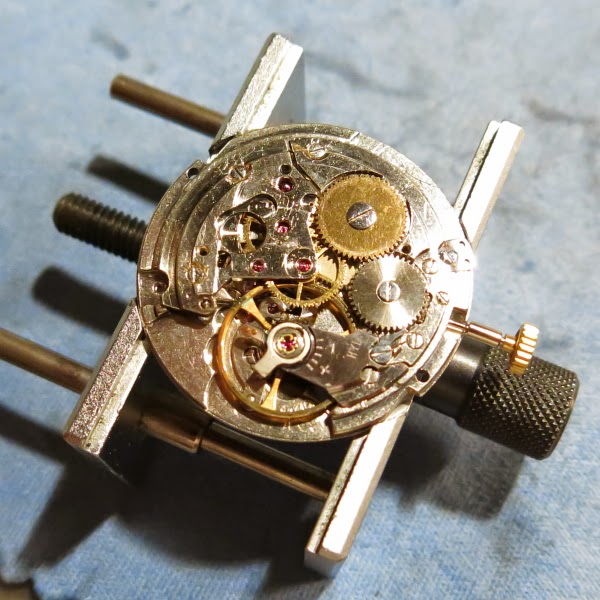 A little tweaking to the regulator is all that's needed to get the watch running just as it should. 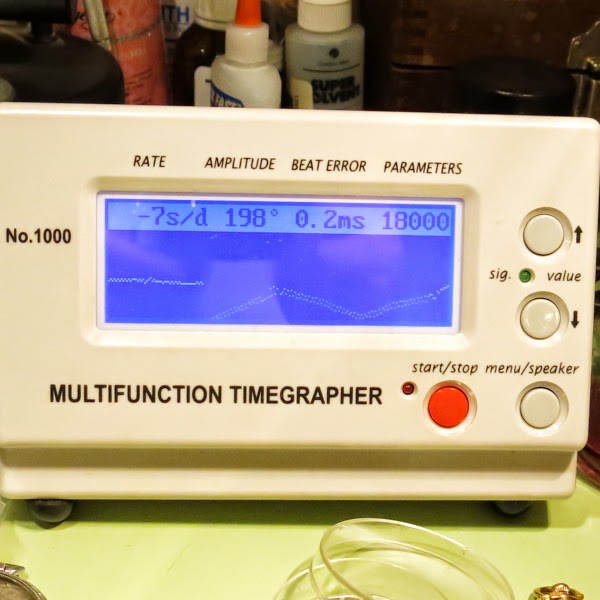 Well everything goes back into the case and a new strap is added to complete the watch.  But something just isn't right with this watch... sure it's still a little beat up still but something's just not right. 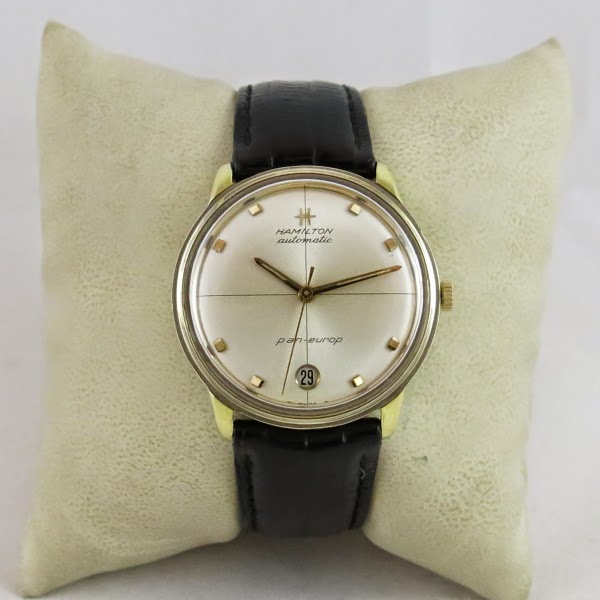 It's missing the bezel!   I didn't even realize that the reason the case looked so unusual was a key piece of the watch is missing in action!  The Pan Europ is supposed to have a cushion-shaped bezel that pops on.

It should look like this one... with it's original bracelet, thanks to a fellow collector.  Notice how the yellow of the case is a little different than the bracelet?  It's subtle but it's there. 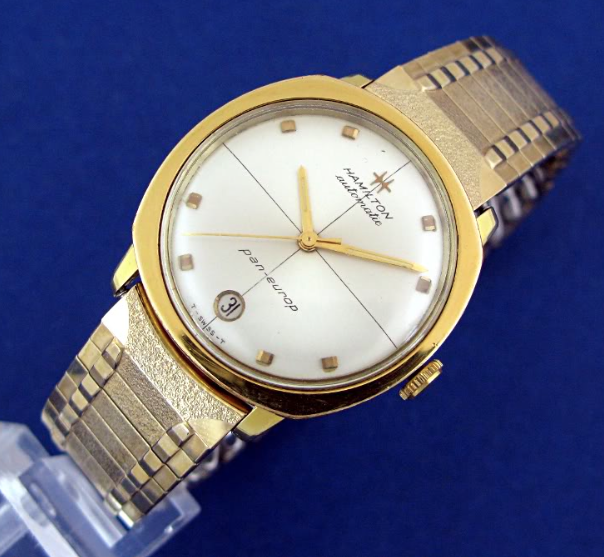 I guess my hunt for a Pan Europ will have to continue - but all I need now is the case - the rest of the watch is good to go.   If you need the guts of a Pan Europ, let me know.

I managed to find another project watch with a case with worn lugs but a correct bezel.  So, I installed it on my original watch to complete it's restoration.  I think it turned out alright and looks much better with the bezel and a more appropriate crown.  Don't you think? 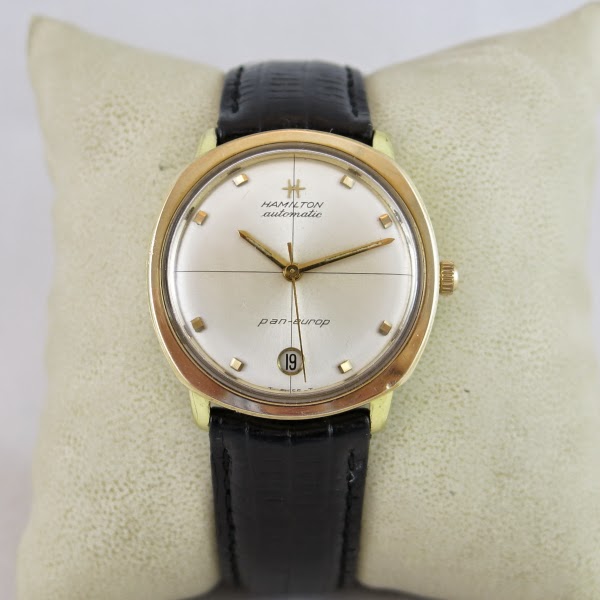