There are three reasons for not being able to identify a Hamilton model;
1.  The watch was made by the awards division and not catalogued
2.  The watch was an export model and sent outside the US
3.  The watch isn't an authentic model.

You don't tend to see "fake" Hamiltons but you will find Hamilton movements that have been re-cased by a jeweler.  That was done more frequently with ladies watches but there are plenty of non-authentic watches out there.  Jewelers often would re-case a movement from a gold filled model into a solid gold case with decorative elements like diamonds, etc.  That way the jeweler could make more money than they could with the gold filled model alone.

In addition, Hamilton movements were so well made that they often out lasted their original cases.  You will sometimes see 987 movements from the 1920's and '30s in what appear to be 1950's cases.  I suspect that is because the original owner realized it was less expensive to get a new case than it was to get a new Hamilton.

Watches with re-cased Hamilton movements are typically easy to spot though... they usually look too gaudy to be original with diamond-numerals on the dial, or they say "17 jewels" on the dial, or they come in a rolled gold case with a stainless steel back.  One thing is for sure, legitimate pre-1969 Hamiltons will  normally say Hamilton Watch Co, Lancaster PA inside the case back (although there are some exceptions to the rule from the 1930's).

Anyway, what's all that have to do with my latest project?  Well, I'm not really sure if it's the real deal or not.  It sure looks like it should be, but as you'll see below, it's debatable.

My mystery watch appears to be an Accumatic from the late 1960's, maybe the very early 1970's.  The dial looks like a legitimate Hamilton dial and the crown has a Hamilton H on it, as you would expect. 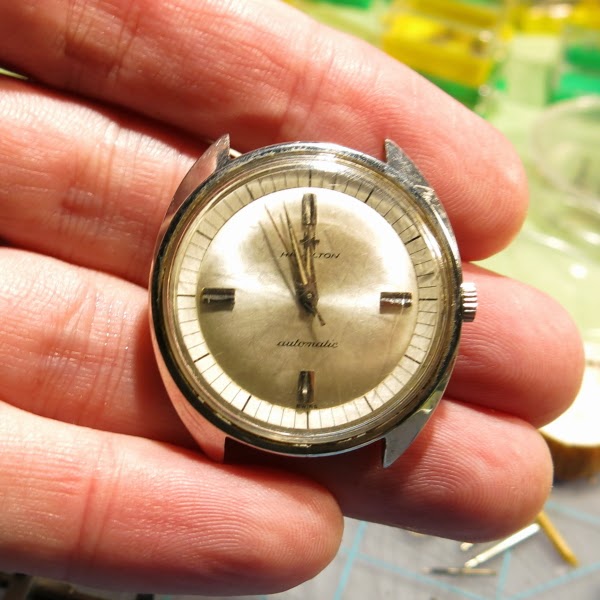 A detailed review of the catalogs revealed that the closest model that matches the design is the 1963 Dateline A-576 - it was made through 1965.  However, it's a calendar model and has a date window at the 3:00 position.   The case, dial markers and shape of the hands is very similar though.

Since the case is stainless steel and it's an automatic, I would surmise that my project watch would be in the Accumatic family and would be a model in the 500 series.  But there's no exact match for it in any of the catalogs.  There is no presentation on the case back - so it's not an awards division model, either.

The case back unscrews and it doesn't say Hamilton on the outside - that's unusual.  There are numbers on the back though...  4048-3.  Stainless steel Hamiltons with case numbers typically got a -3 to denote stainless steel (a -4 would be yellow RGP).  That's a clue that it's a legitimate model. 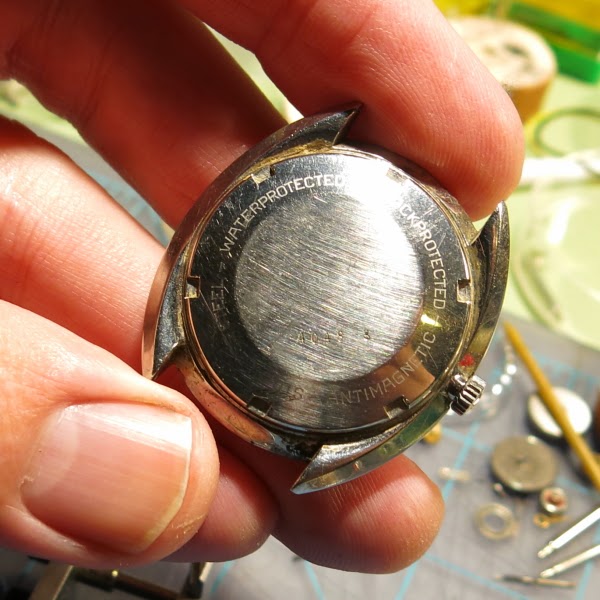 The inside of the case back is devoid of any markings other than a serial number.  Why doesn't it say Hamilton though?  That's a sign that it might not be legitimate. 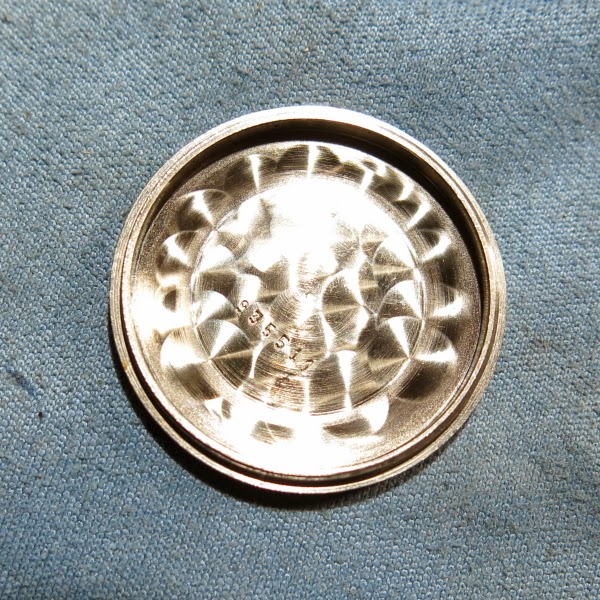 Tucked inside is a 17 jewel 689A movement.  It's well fitted to the case and it looks like it belongs there as it isn't installed with an ill-fitting generic movement ring.  That's a nod towards legitimacy. 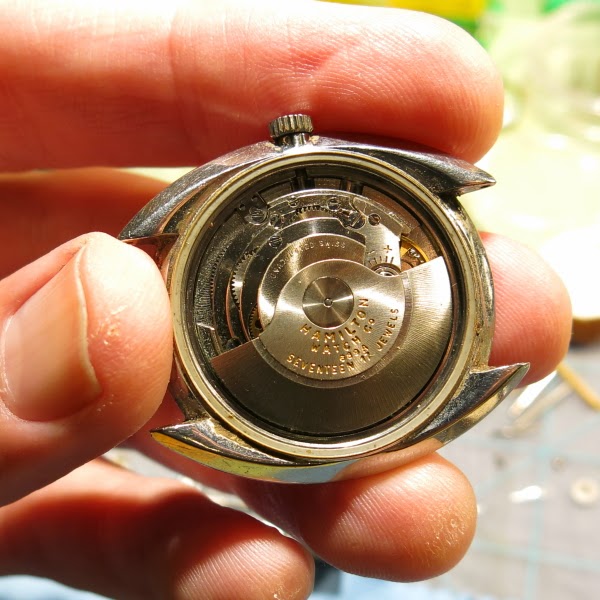 The movement and dial come out the back when the stem is removed and the two retaining clips are loosened.  The dial is very clearly an original Hamilton dial, right down to the Swiss marking under the 6 marker. 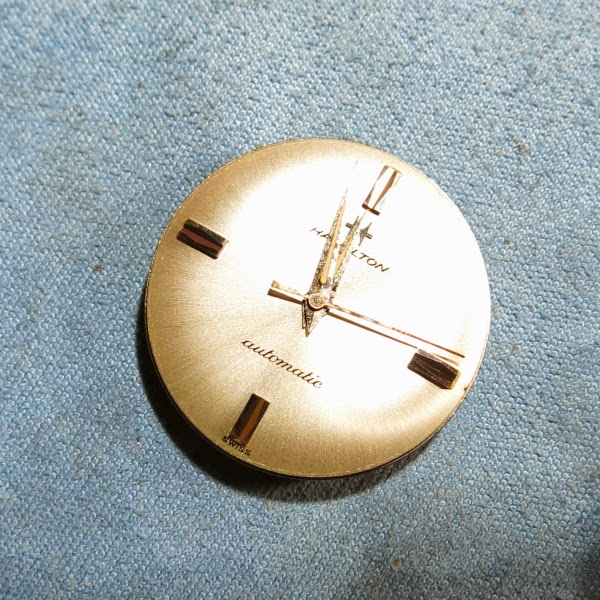 The crystal has a reflector ring and a special decorative ring installed inside the bezel.  Once the crystal is removed, all of the parts can be separated so they can be cleaned and polished. 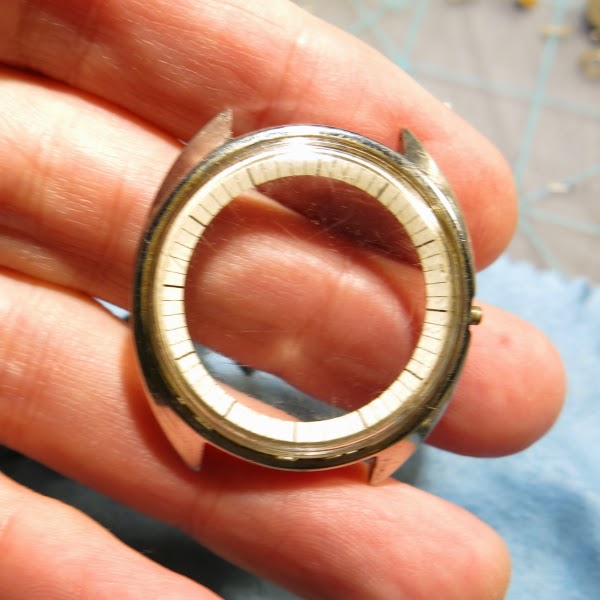 This is a special crystal of some sort... probably a PA-style in the GS line.  The reflector ring snaps into the inside of the crystal and the assembly is pressed into the bezel. 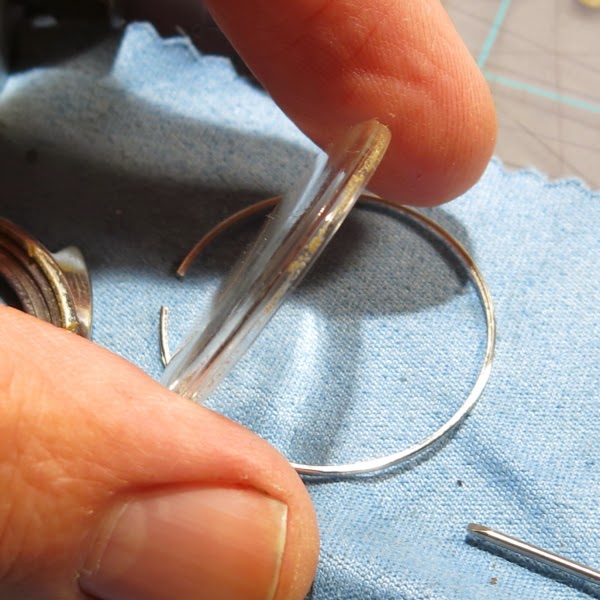 All of the parts are disassembled, cleaned and dried before getting reassembled.  I decided to polish the crystal as best I could - as replacing it could be a challenge. 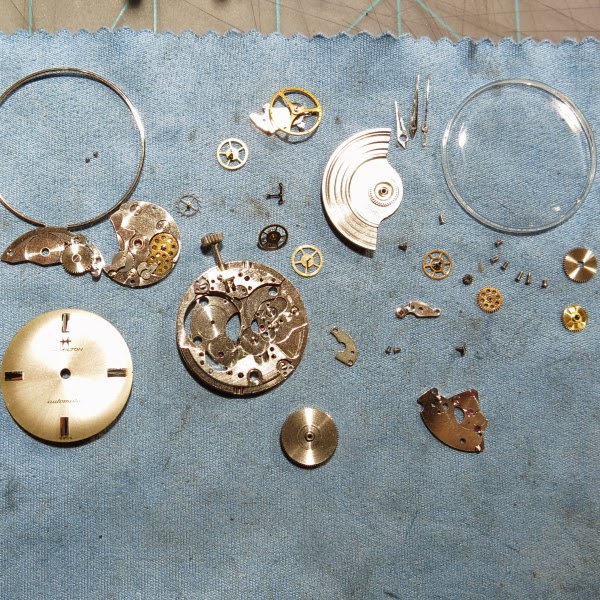 The reassembled movement goes onto the timer.  It's running well but the beat error is a little high at 2.6ms. 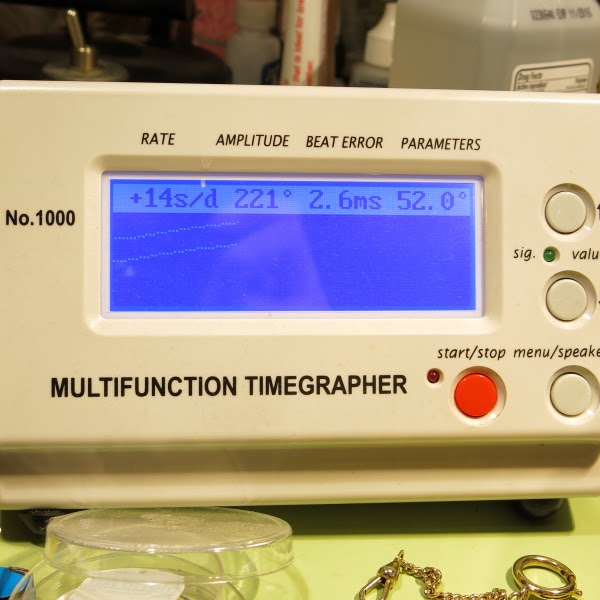 Fortunately this movement incorporates a moveable hairspring stud - so I can easily adjust the beat error by tweaking the hairspring, as shown below.  Just a little tweak will do the trick - I just need to go the right direction. 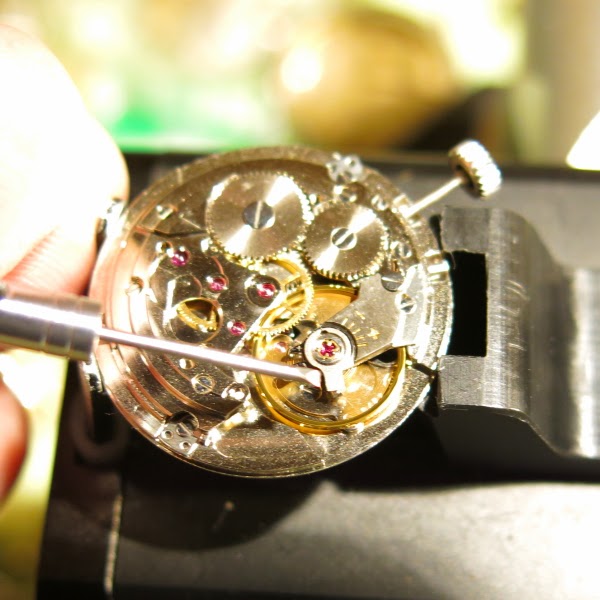 Well, after a few tweaks, I was able to tune the beat error down to 0.2ms - it doesn't get much better than that. 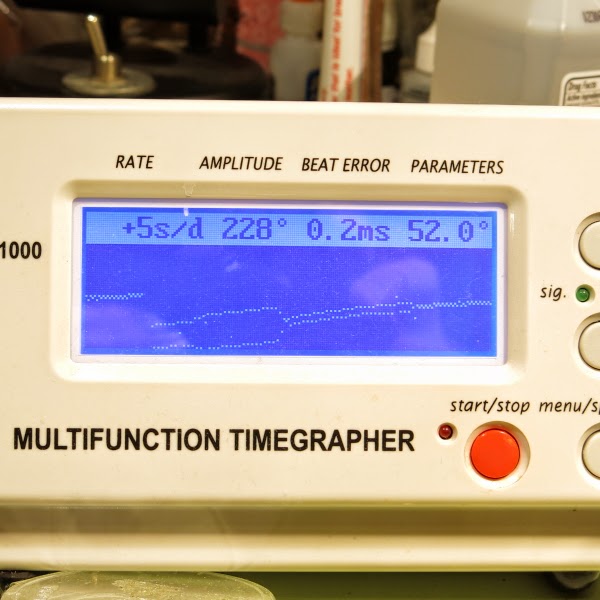 I also took the time to re-lume the hands.  I stick them in pith wood until the paint dries.  You apply the luminous paint from the back of the hands so they look perfect from the top. 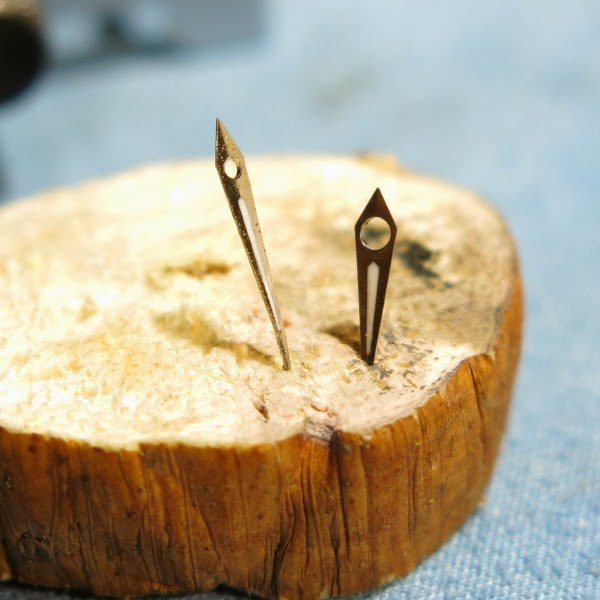 The rotating oscillating weight goes back on to the movement, along with the dial and hands.  Then it all goes back into the case.  I did a good job polishing the crystal - it's not perfect but it's not too bad either.  A new genuine lizard strap completes the restoration. 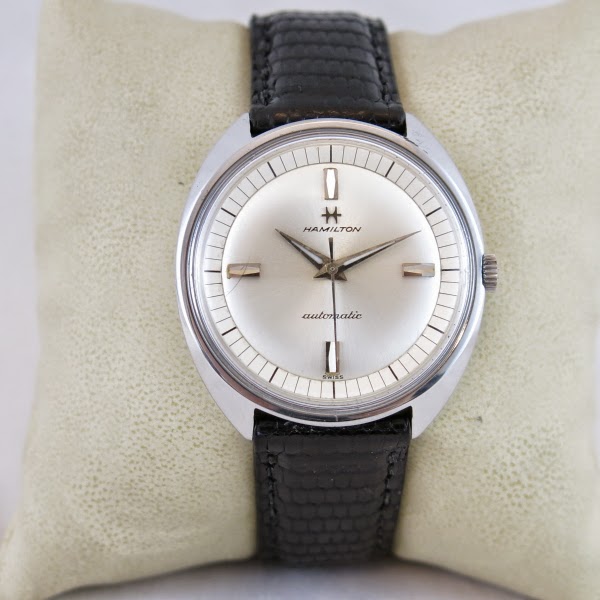 I can't say with 100% certainty that this a legitimate model - but it sure looks like the real deal to me. 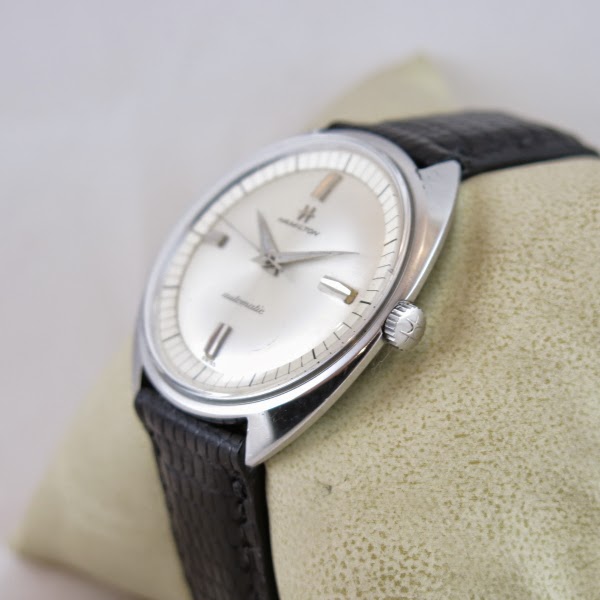