There are a handful of models that switched names after being introduced.  One of them is the 1935 Sherwood.  In 1936 it was renamed the Sherwood and continued to be produced through 1938.

And thereafter it was known as the Sherwood.

The Seneca / Sherwood was one of the first models to use the 14/0 sized 982 movement.  This 982 is a 19 jewel grade that initially was used only in solid gold models until 1940.  Then it went into 14K gold filled models and solid gold models got the newly introduced 982M medallion movement.

The model came with a choice of an inlaid black enamel dial or an applied gold numeral (AGN) dial.

It may seem like a simple watch but in 1935 when this watch was introduced, $75 was the equivalent of $1300+ in today's dollars.  Keeping in mind that it was the middle of the Great Depression, this was a very expensive watch!

I recently purchased a Seneca project watch.  I can call it a Seneca because the serial number on the movement is very low and dates to 1935.  It arrived in typical condition, a beat up crystal but otherwise in good enough shape that a little cleaning and polishing would do it a lot of good. 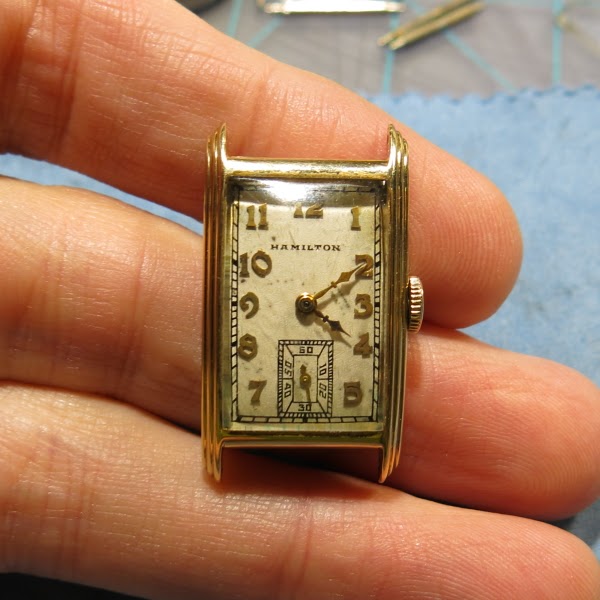 The movement run briefly but you can easily tell that it's been a while since this watch has seen a watchmaker. 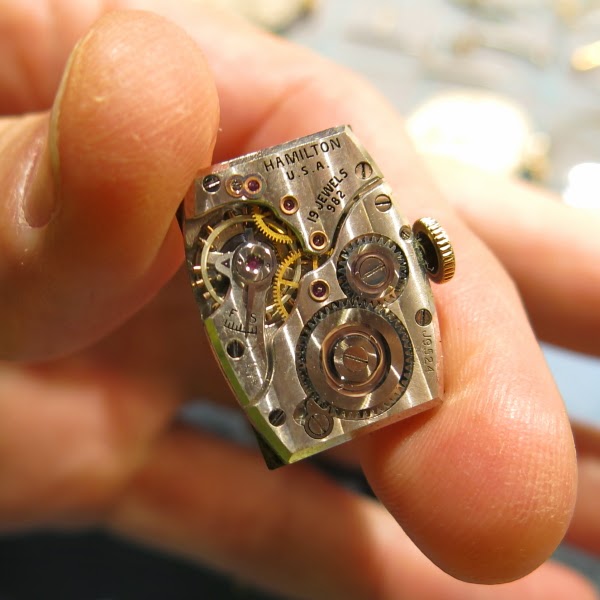 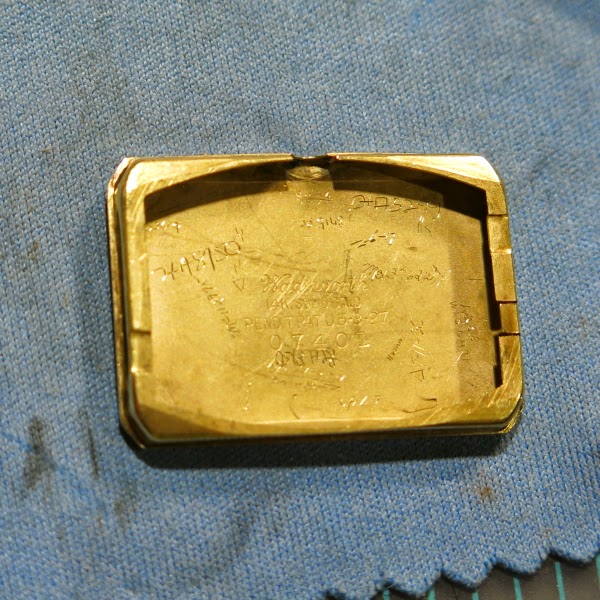 The dial is clearly very old.  This dial can be refinished to look like new.  I can't tell from this perspective if it's already been refinished but even if it was, it's clearly very "authentic".  I should be able to clean it up a little. 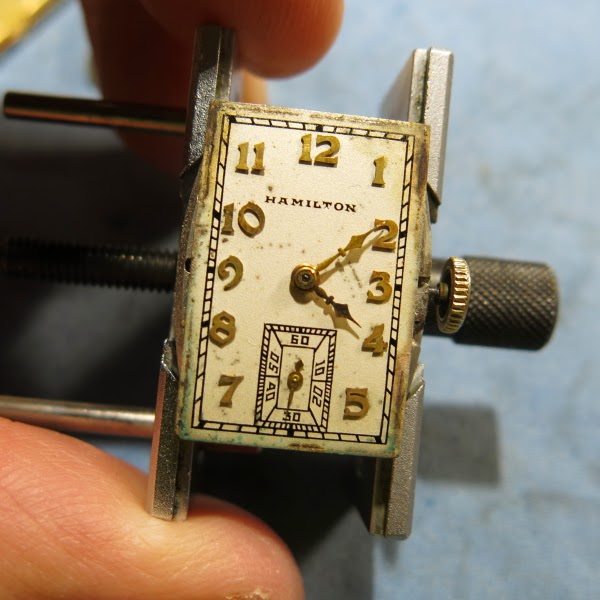 Although the 980/982 movements were used from 1935 through 1952, there were a few subtle changes to the design over the years.  As example, the set lever spring / bridge was a two-piece design initially (as my tweezers indicate) and the balance cap jewel to the left was held in place with only one screw. 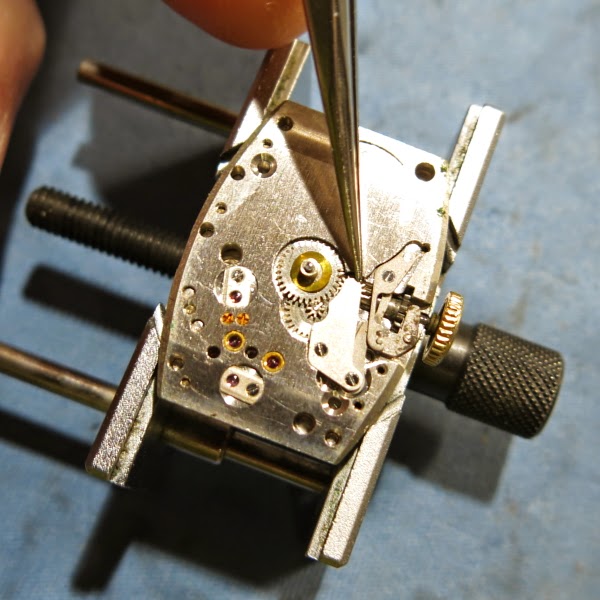 I always check the mainsprings on these pre-1950 watches as they very often have old blue-steel mainsprings that have set over the years and lost a lot of their energy.  This one has a white alloy mainspring but it looks a little odd to my eye. 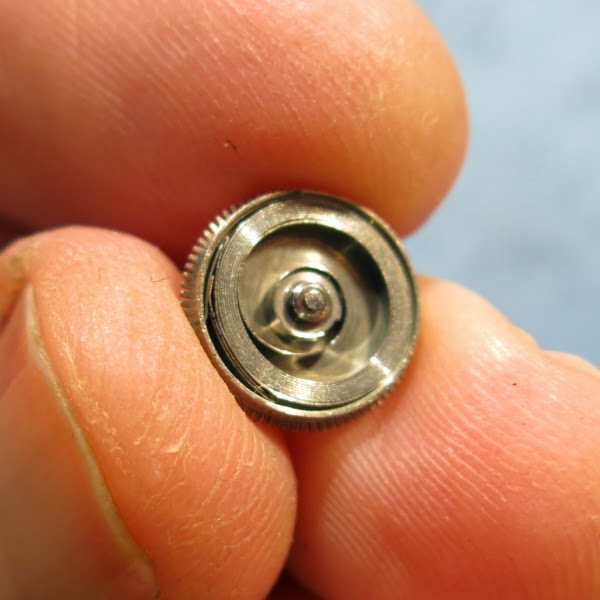 Sure enough, here's an odd trick... the outside end of the mainspring is secured to the barrel but the method of attachment varies.  The US-made Hamiltons have a T-end or two little tabs that stick out.  Swiss movements often have a tongue-end where a little strip of metal is recessed into the sidewall of the barrel.

This mainspring has Swiss-style end with a tiny piece of an old mainspring with the tabs stuck into the end... making it a T-style. 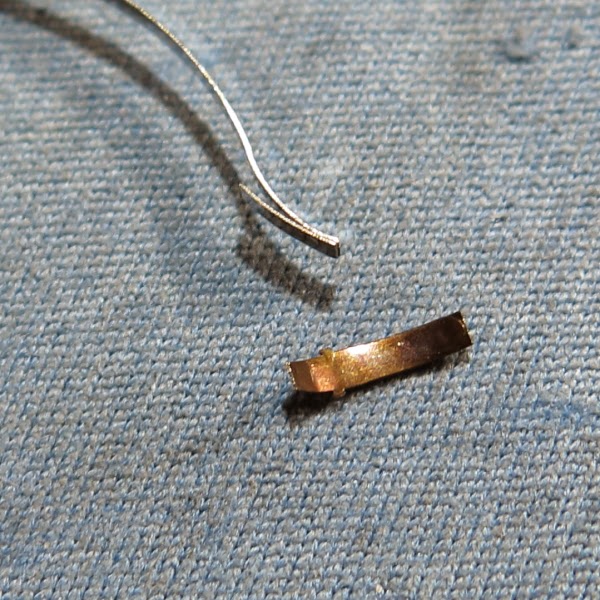 Compared with a correct new mainspring, the mainspring that came in the watch is much shorter.  The watch probably would run but I doubt it would run as long as a correct mainspring. 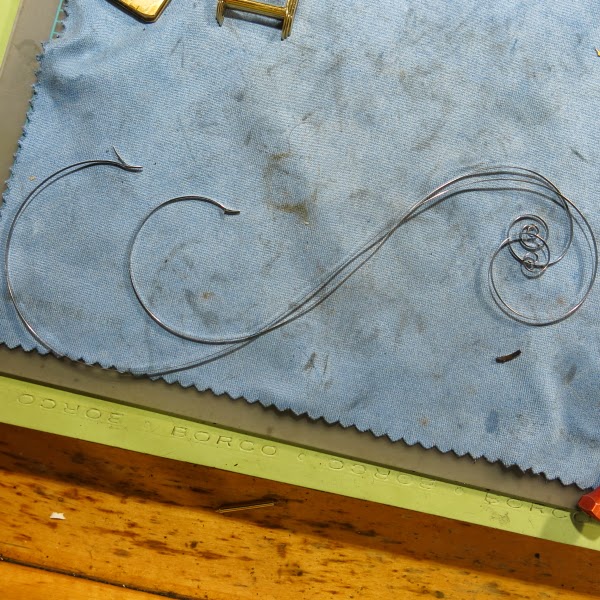 A new glass crystal will be installed in the freshly polished case. 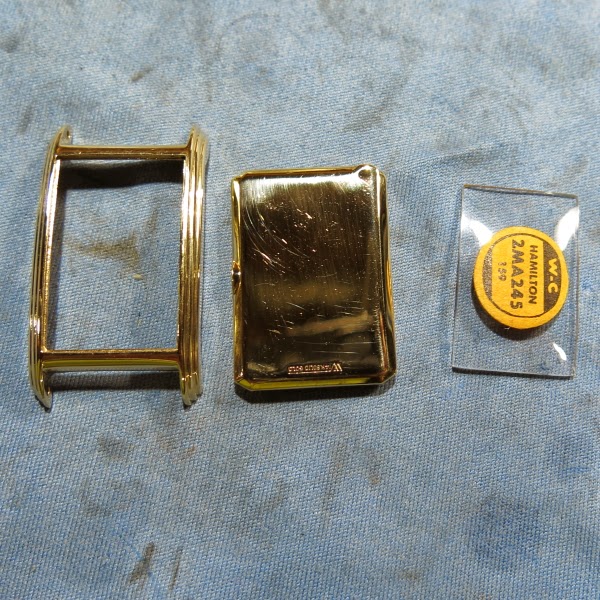 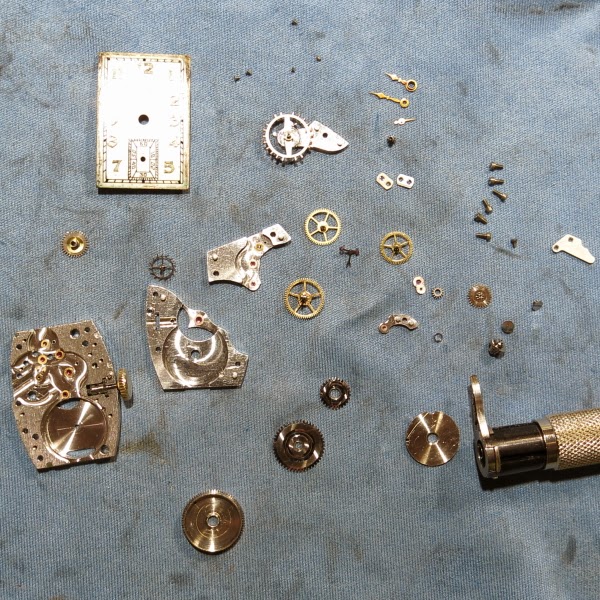 With the regulator set to "full slow" the watch still runs a little fast on a full wind.  The amplitude and beat error are great though and the watch will probably slow slightly as it unwinds.  I normally like to set them a little slower than this but this will have to do.  As Dirty Harry would say, "A man's got to know his limitations". 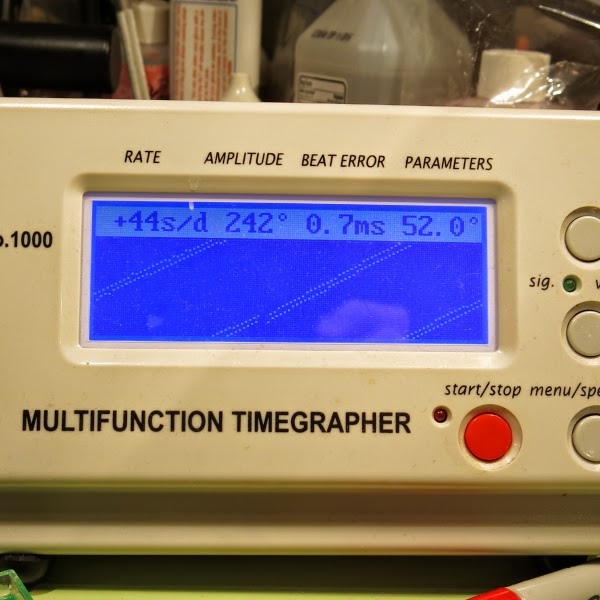 A fine old watch like this deserves a fine old strap and what would be finer than an original, period correct Hamilton strap? 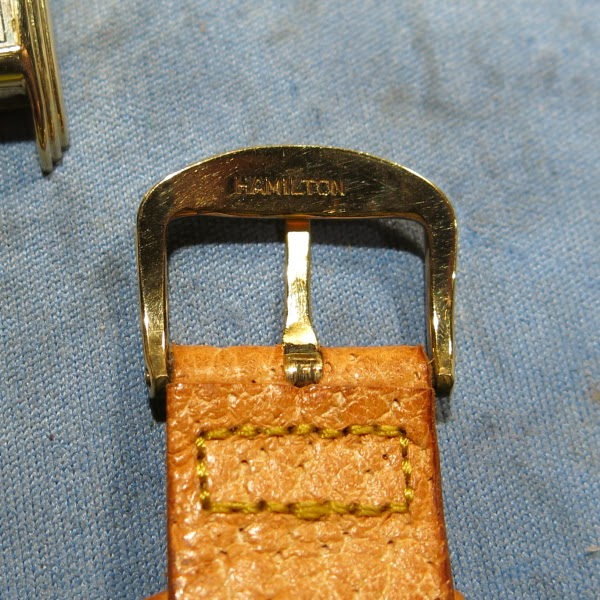 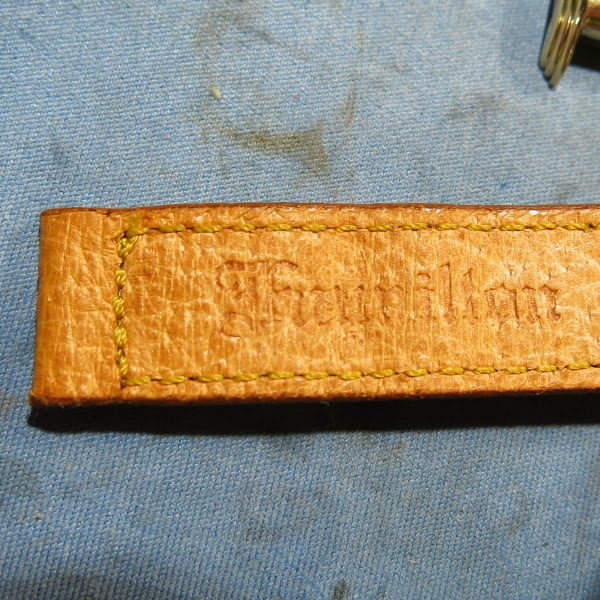 And here's the finished project watch all reassembled.  I'm on the fence with the dial... it's a little spotted and could be redone to look like new but at the same time, it looks very authentic with a couple of age spots.  I think I'll leave it as-is for now. 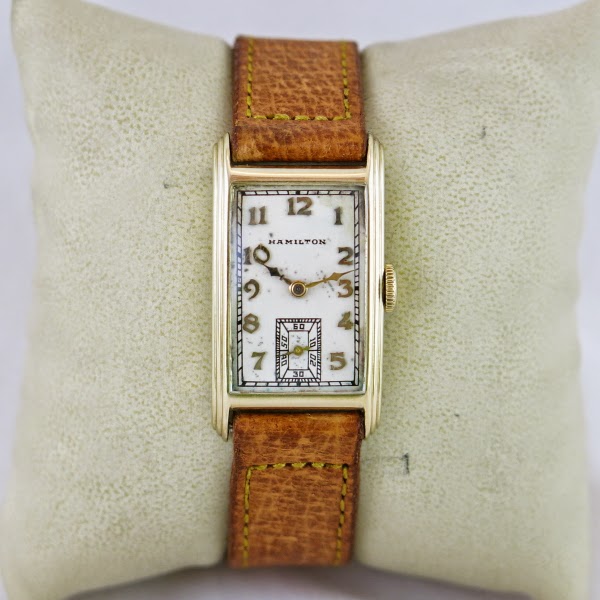 I had a few other project watches with so-so dials so I took the liberty of sending the Seneca dial out to be refinished.  This sort of dial is usually refinished to look good as new and I think that was the case this time too. 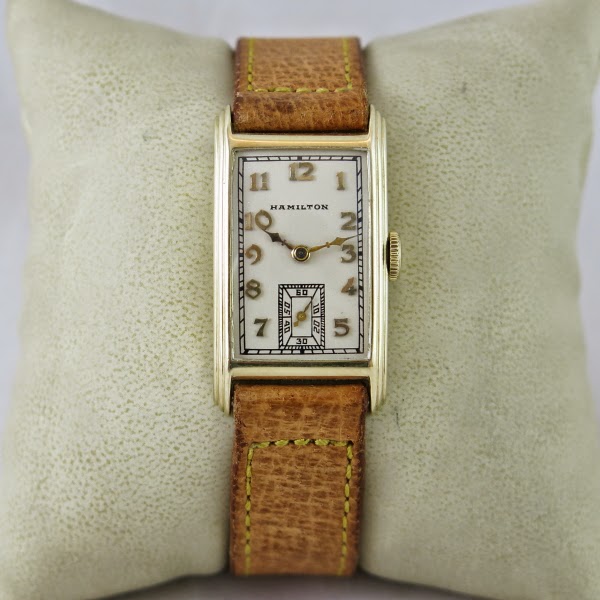