I've done so many 1960's models recently that it seems like a long time since I've done a classic American-made Hamilton watch. 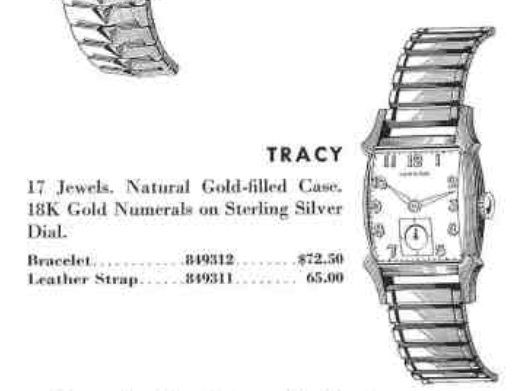 The Tracy is a good example of Hamilton's evolving design aesthetics.  The dial is sterling silver with solid 18K gold numerals - a traditional element dating back to the early 1930's.   The gold filled case, on the other hand, is sharply angular and pointed and reminiscent of the trend of cars with fins, etc.

The Tracy is also an interesting model because it spans movements but doesn't have a -B model.  The earliest Tracys received Hamiltons 8/0 sized 17 jewel 747 movement.  That grade was replaced in 1955 with the shock-jeweled version called the 730.  I guess since the case design didn't have to change, the change was not significant enough to warrant "-B" classification like when models moved from the 14/0 movements to the 12/0 grades earlier in the 1950's.

I recently picked up a Tracy project watch.  It arrived in good overall shape but with a healthy dose of dirt and scratches.  The dial has an even golden appearance so I suspect this watch's original owner was a smoker. 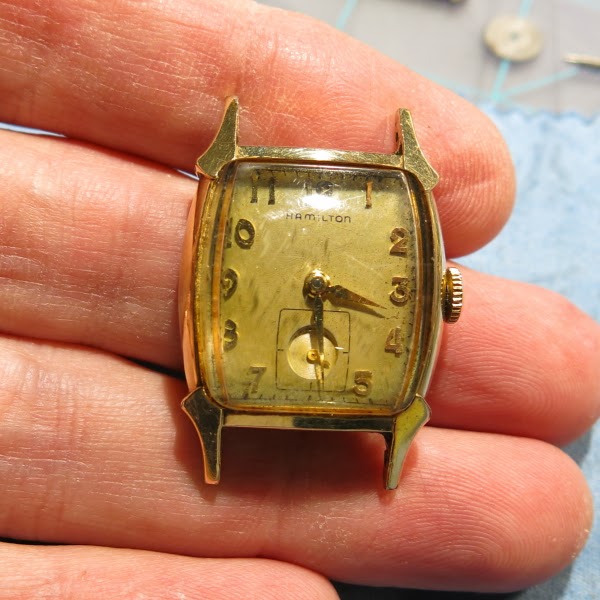 One of the things that interested me in the watch is it is a Christmas watch, presented on 12-25-1955. The case back is in nice shape and will polish up well, I suspect. 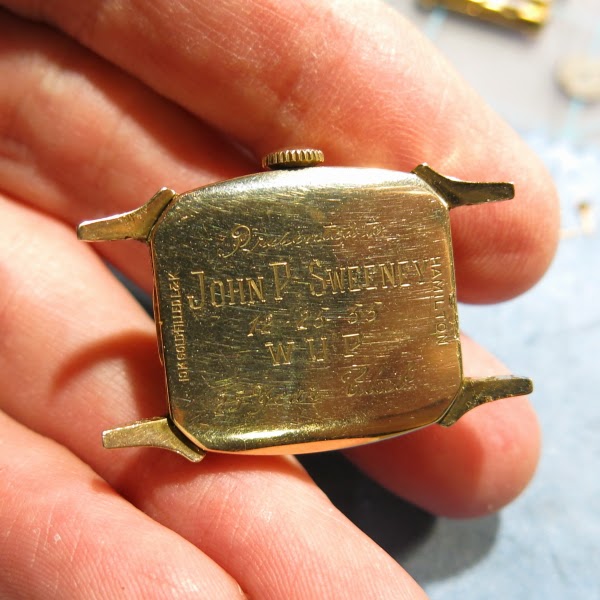 Here's a better shot of the dial without the beat up crystal in the way.  I could probably clean the "patina" (if that's what it is) but I can already see the printing on the dial is compromised, especially around the lower section.  So I'll have to be very careful not to get it too clean and lose all the printing.  It's really a tough call whether to clean a dial or not - I think it's a judgement call.   I am personally not a fan of dials that look like this... it looks "sick" to me and I'd rather get it refinished to look new than to have a dial look pale green all the time.  Others might choose an original looking dirty dial over a bright and shiny refinish.  Fortunately for Hamilton collectors, it doesn't really matter.  Most people's "original dials" are probably old refinishes anyway - as that was often part of the regular service process back in the day. 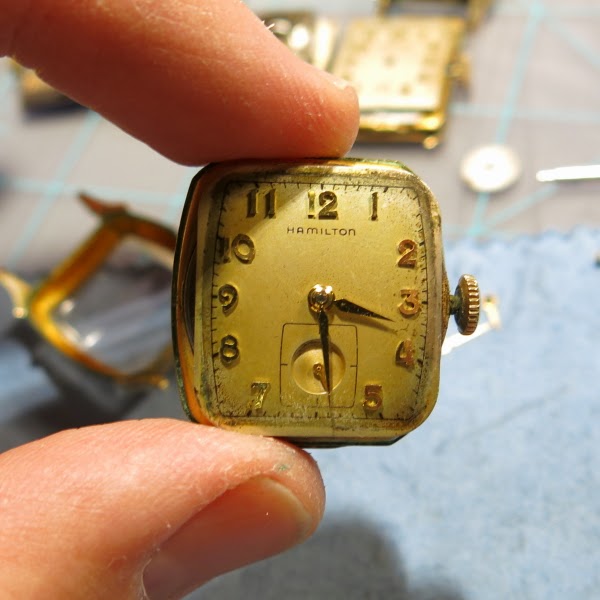 The 747 is nice movement, even when it's filthy it still has a nice shine.  This one is part of the last run of 747 movements because there is no serial number on the train bridge.  This is probably a late 1954 or early 1955 Tracy, I bet. 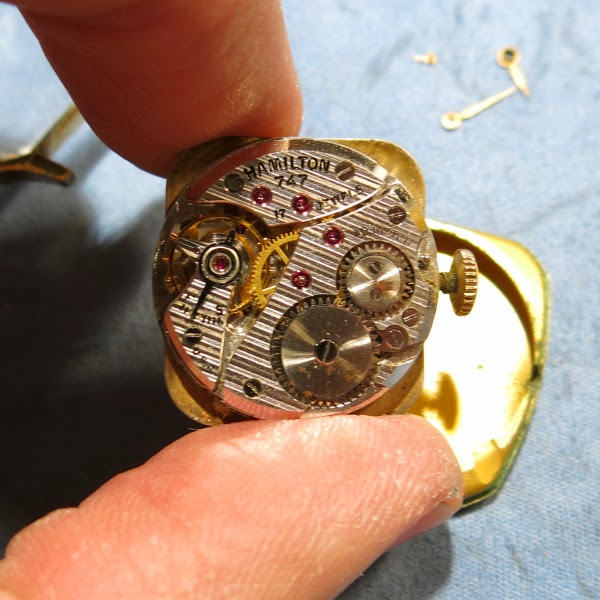 I'll see if my magic dial cleaning solution will make an improvement in the dial's appearance.  If I goof it up, so be it.  I'll just get it redone. 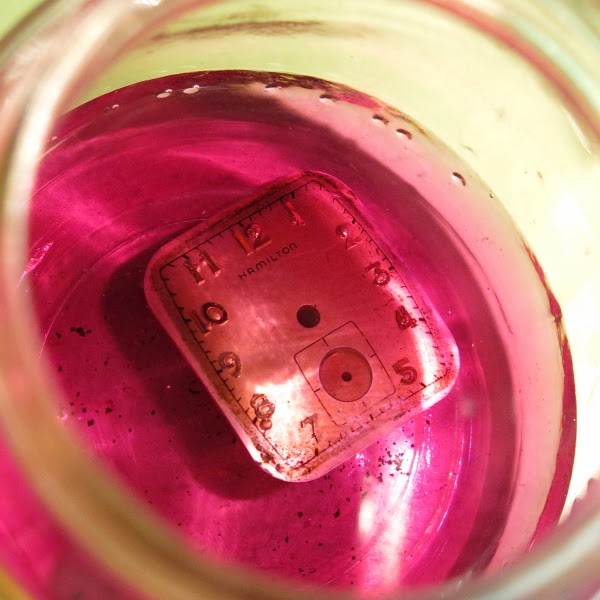 A new glass crystal will make a nice improvement to the watch.  The original Tracy crystal is arched from top to bottom.  This one is the correct size but is flat.  A purist might object to the difference but to me the crystal is sort of like tires on a car - they need to fit properly and be good quality but they don't have to be original equipment. 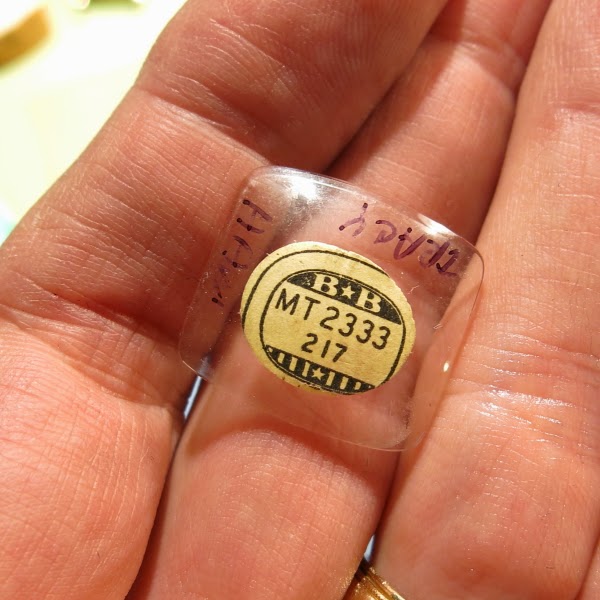 The now-cleaned and reassembled movement goes onto the watch timer to see how it's running.  It's much brighter than the photo above.  It's amazing what a trip to the spa can do.  I think it's indicative of Hamilton's status as a premier brand that their movements are so nicely damascened.  No one but a watchmaker would have had a need to look at the movement yet every movement is a joy to behold. 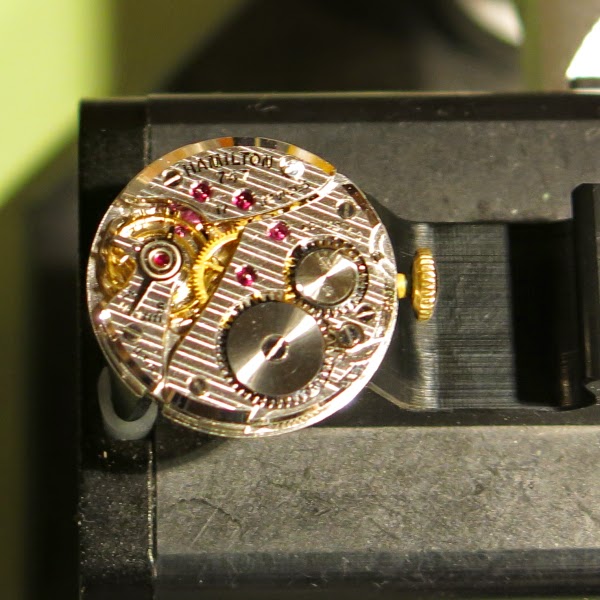 Well, it might be nice to look at but what really counts is how well it runs and this one is running a little fast with a high beat error.  I could slow it down easily using the regulator but fist I will need to adjust the hairspring to lower the beat error - ideally below 1.0ms but I'll accept anything under 3. 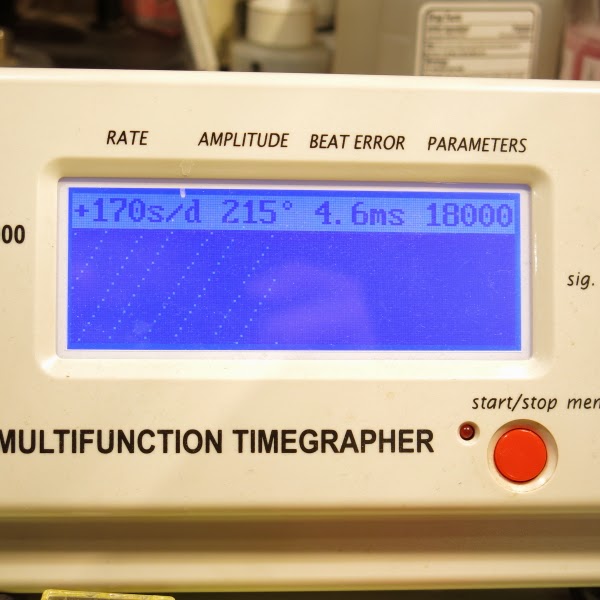 Adjusting the beat error on this movement requires removing the balance from the balance cock (that's easy).  Reinstalling it can be the tricky part.  However, before I can reinstall it, I need to rotate the hairspring by rotating the brass collet in the center.  It's what holds the hairspring to the balance staff.  I also need to move it the right direction so the impulse jewel on the other side of the balance wheel lines up better with the pallet fork in the movement.  It's done by trial and error so you can see why I will settle for less than 3.0ms - as every trial is an opportunity for ruin. 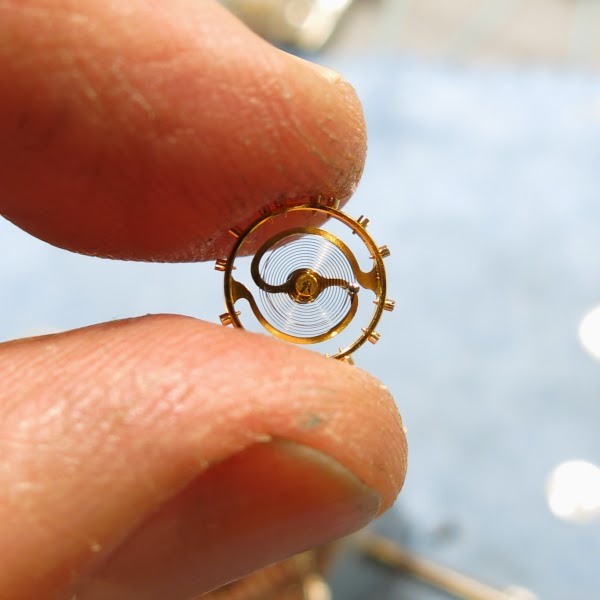 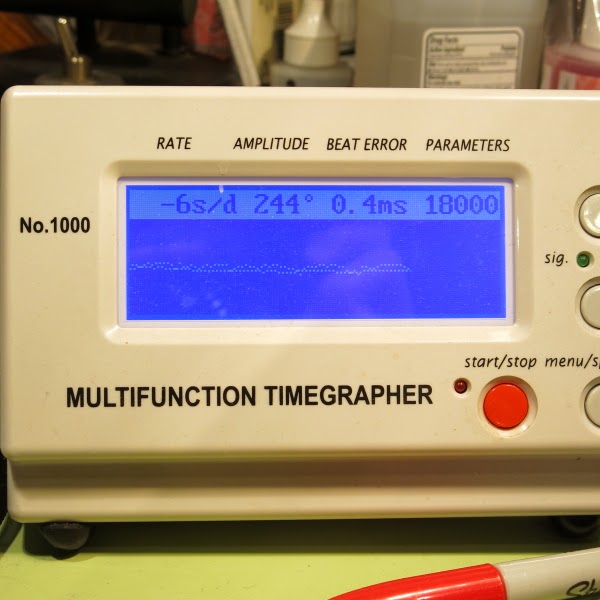 Now that the movement is doing it's thing all that is left is to put the dial and hands back on and reinstall "the works" into the freshly polished case.  A new lizard strap completes the restoration. 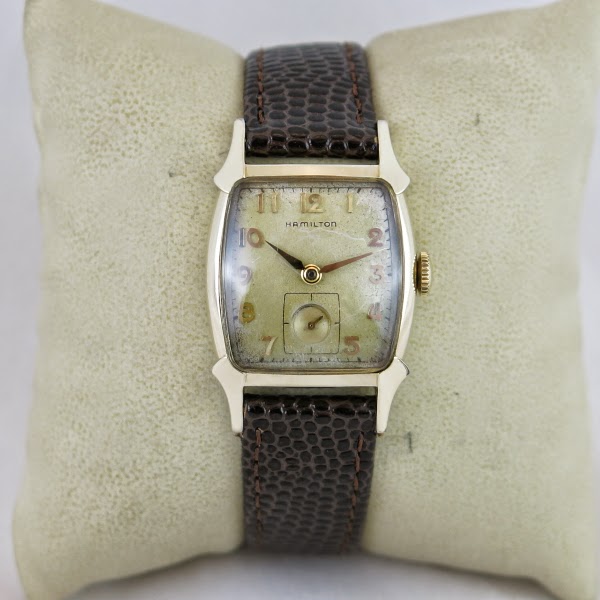 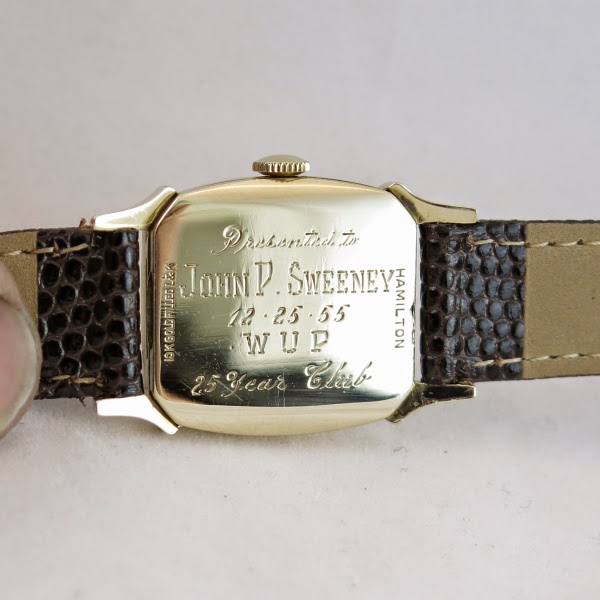