The last hurrah of Hamilton's US production at the end of the 1960's included several new models that wouldn't be produced after production in Lancaster, PA ceased in 1969.  One of the models introduced in the 1968 / 69 model year was the Accumatic A-508.  It was made for just those two years. 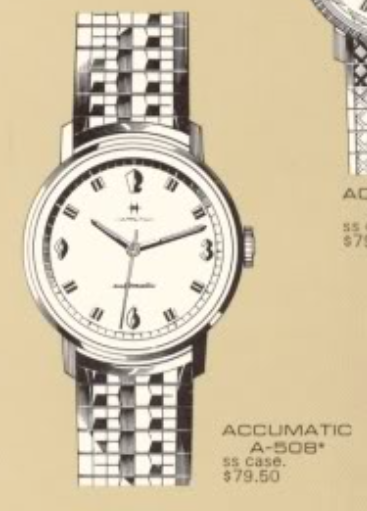 The A-508 came in a waterproof stainless steel case with a white dial and silver-colored markers.  There's also a shiny silver chapter ring going around the perimeter.

I recently landed an A-508 project watch.  It was in nice condition and running fine but like all new purchases I wanted to make sure it had fresh oil inside.  It came on a generic expansion bracelet that didn't do much for me so it will have to go. 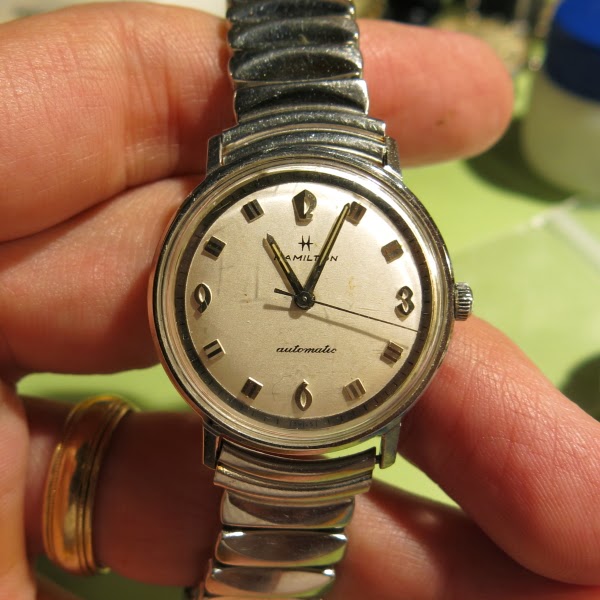 The casebook is very plain and the rounded contour is a good indication that there's an ETA-based automatic inside. 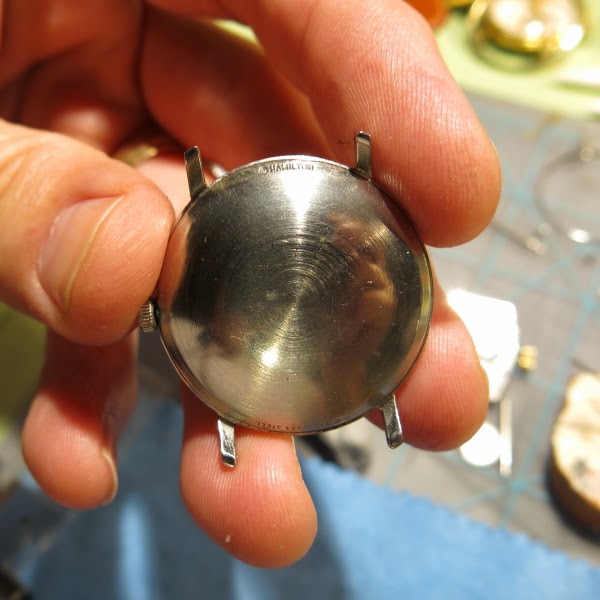 Here's a bit of a surprise, the rotor on this watch is not marked Hamilton and it's 21 jewels.  It's clearly an ETA rotor due to the cutouts on the oscillating weight.  I suspect it was a replacement for a worn rotor at some point. 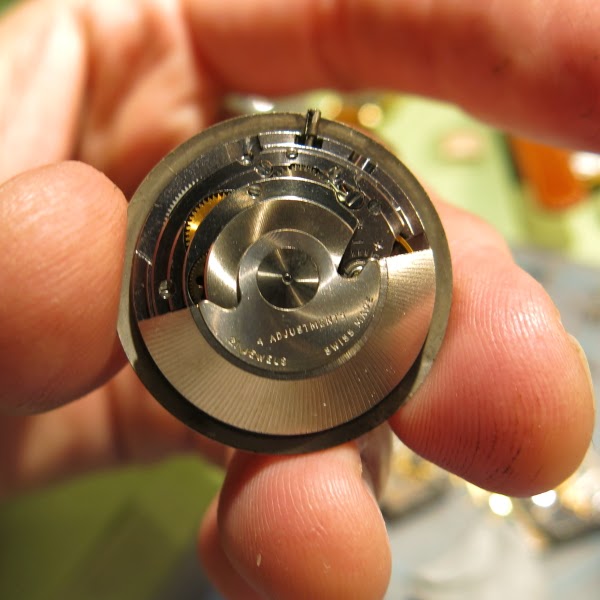 With the rotor out of the way you can see the balance cock is stamped "HYL" which is the import code for Hamilton.  So this is definitely a Hamilton movement with a replacement rotor. 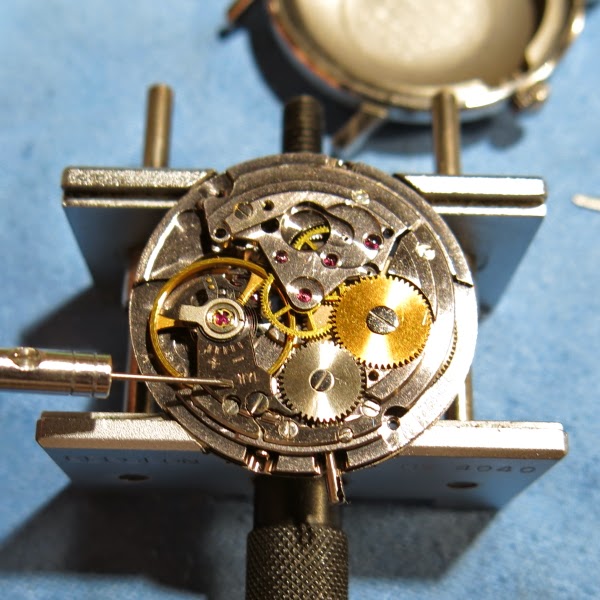 Here's the project watch rotor on the left with a Hamilton parts movement on the right.  They are almost identical. 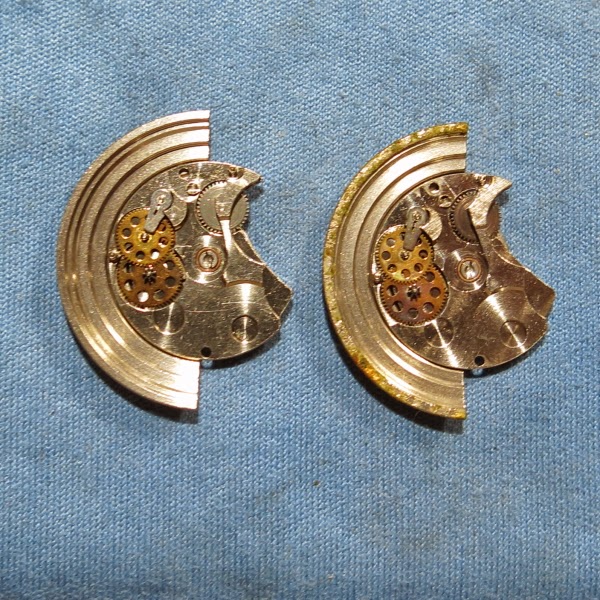 The only difference is the unmarked rotor's reversing wheels have four red jewels as indicated by my screwdriver tip.  Add those four jewels to the 17 inside the watch and you get 21. 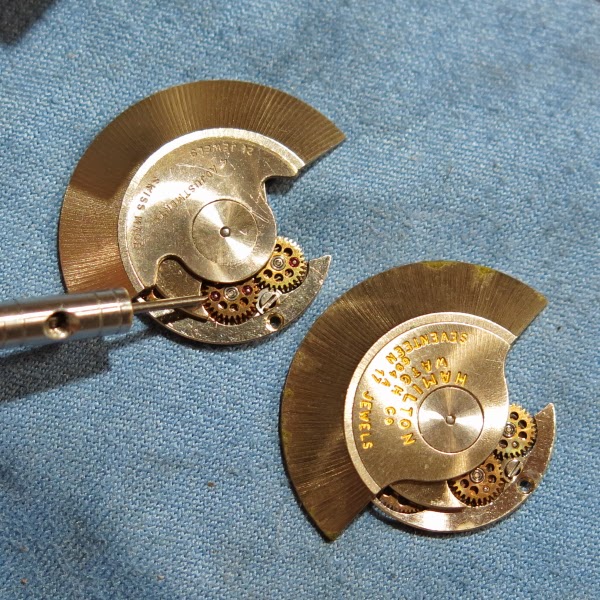 The A-508 should have an 689A inside and I happen to have a parts movement to use.  It's in better shape that the movement that came in the watch so I'll just swap it out. 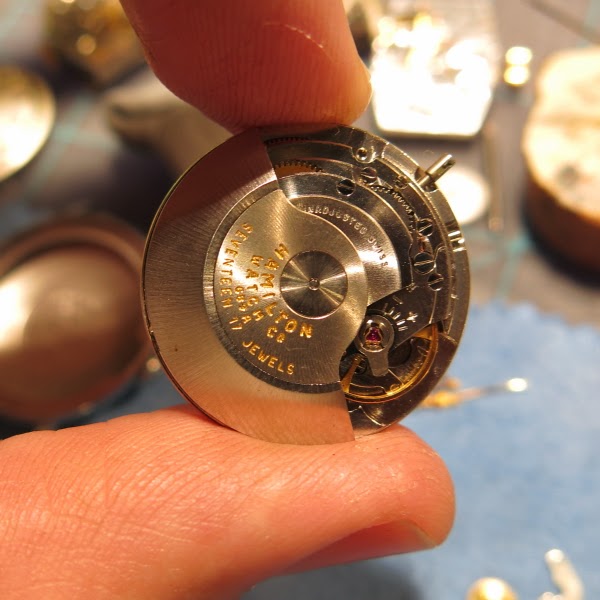 Everything gets cleaned and readied for reassembly. 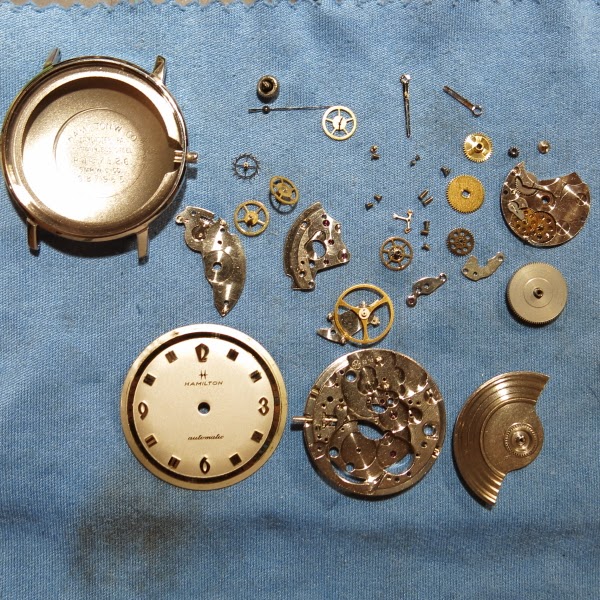 The trickiest part of this movement is to get the train bridge in place.  It supports four wheels and you need to get them all lined up correctly in order for the bridge to drop in place.  When everything is lined up you can spin the four wheels and they'll whirl around for a second or two. 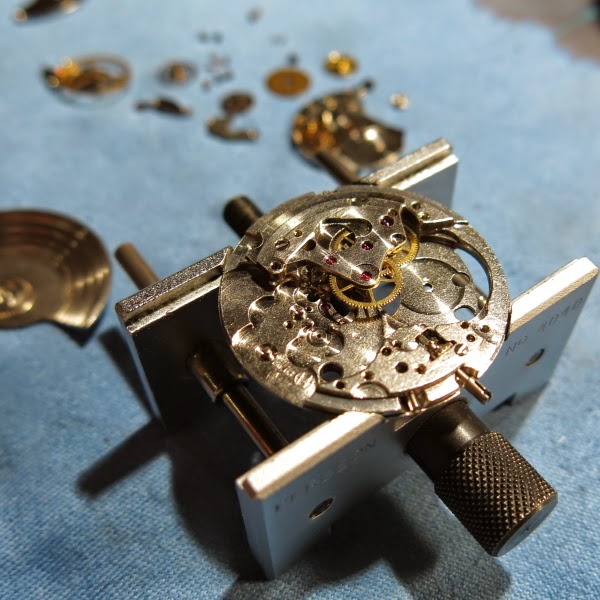 Once the train bridge is on I next install the pallet for and then the mainspring barrel and it's bridge.  The mainspring is under the golden ratchet wheel and that wheel is turned by either the rotor assembly (in automatic mode) or using the silver ratchet wheel that the crown will turn. 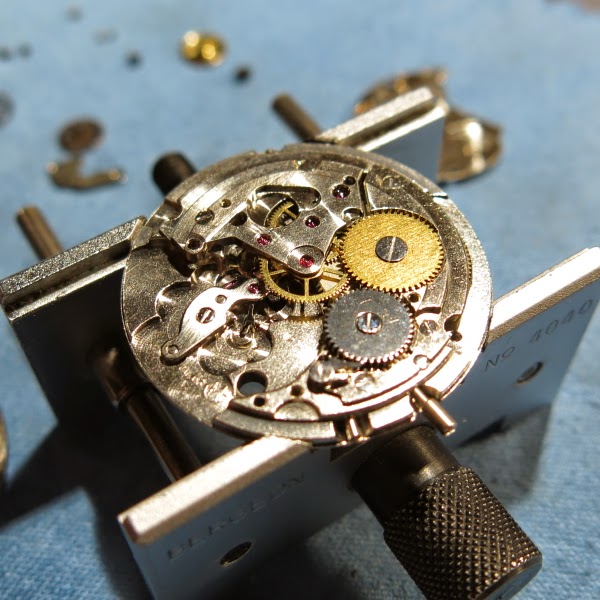 The balance goes on next and it's spinning away, doing it's thing. 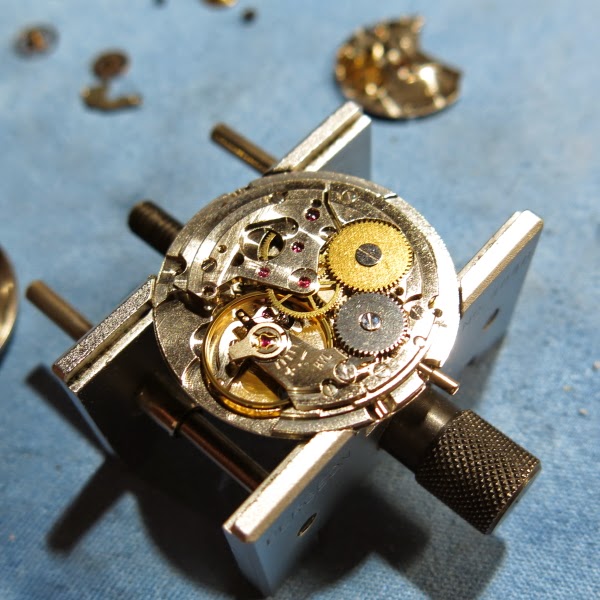 The timer reveals that the beat error is a bit a high but it's easy to adjust on this movement. 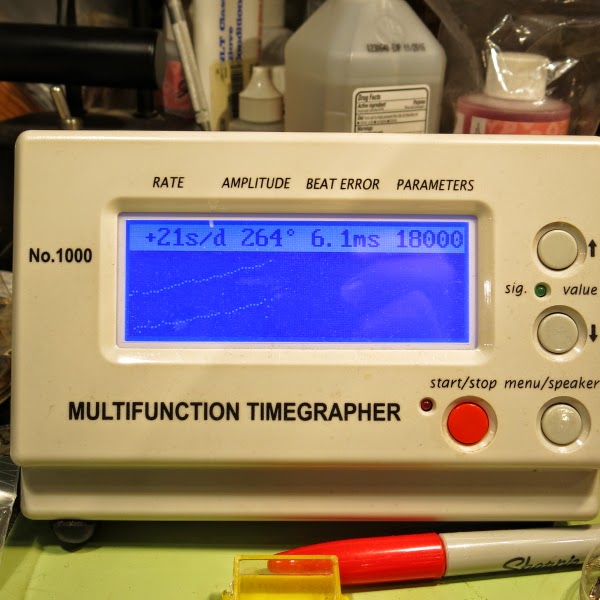 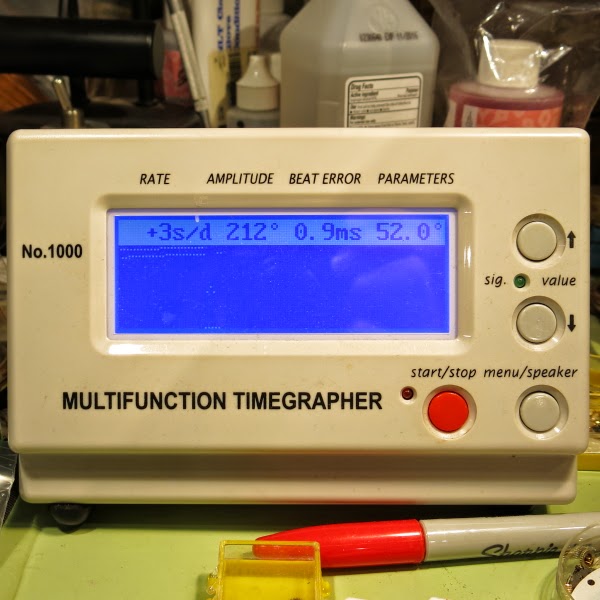 Now I can reinstall the dial and the rotor assembly is the last thing to go in place. 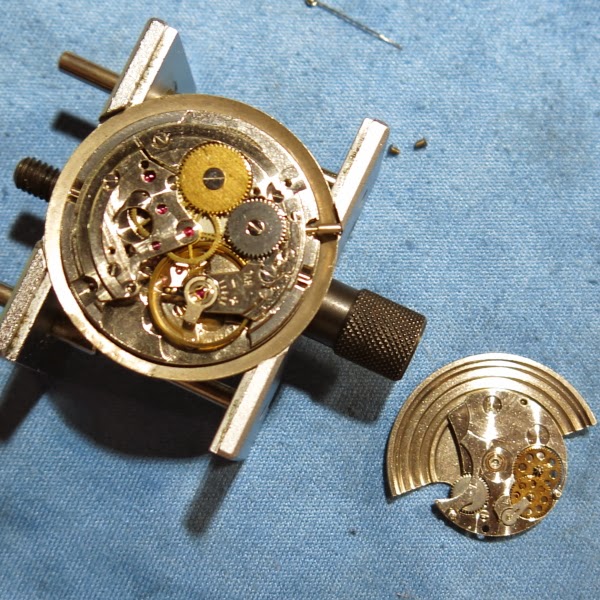 I'll use a new crystal to seal up the watch. 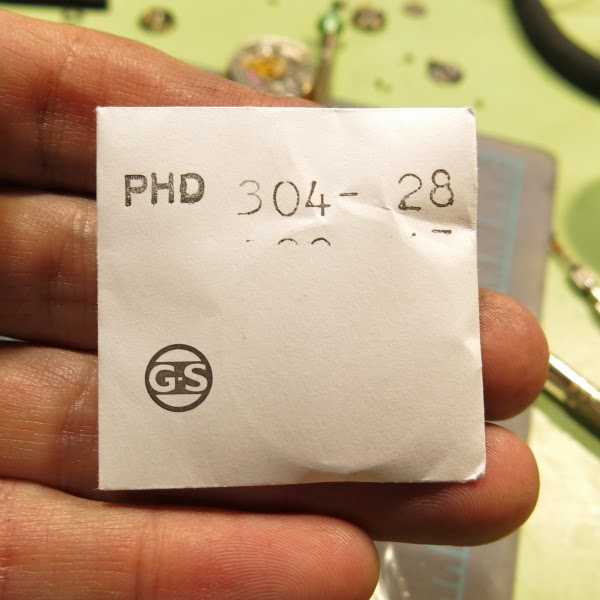 I happened to have an extra expansion bracelet that I think looks better with the watch... plus I'm out of straps.  This A-508 turned out to be a sharp looking watch. 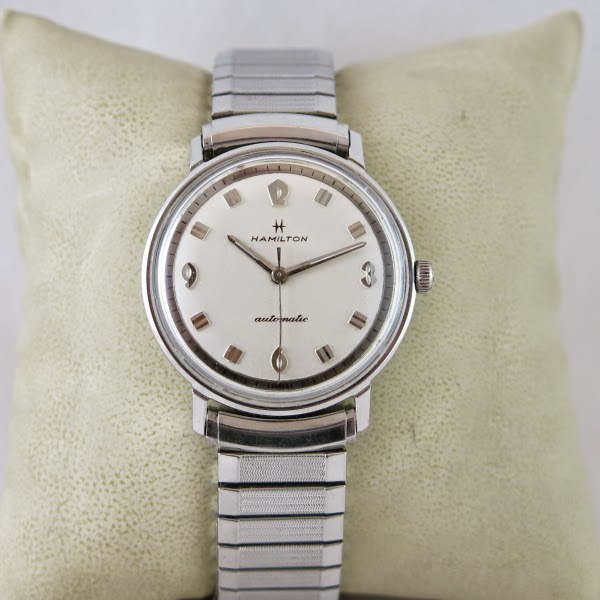