What time is it when an elephant sits on your watch?  Time to get a new watch, right?

What time is it when an elephant sits on your watch in 1932?  Probably not a great time to buy an 18K gold watch... or so it would seem.

In 1928 Hamilton purchased the Illinois Watch Company - a premier watch brand in it's own right.  Illinois would continue to make watches but the Great Depression took it's toll on everything, including the watch industry.  It wasn't a great time to sell high-end watches, but they tried.

One of the really interesting pocket watch lines is the Tycoon series with the 21 jewel grade 400 movement.   The grade 400 was based on excess Illinois grade 528 movements left over in inventory. 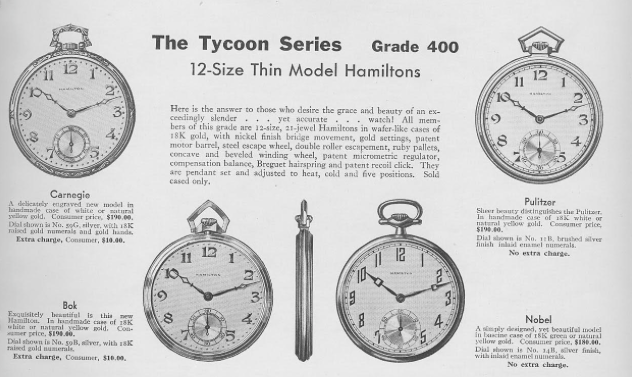 The Tycoon models were second only to the 23 jewel "masterpiece" models with the 922 movement, although that can really be debated.  They were considerably thinner than anything else in Hamilton's lineup and in many ways were ahead of their time... as you'll see in a bit.

The later 1,500 grade 400s also have a number stamped on the main plate.  Although those numbers also have 7 digits, they start with the number 540 and the last four digits are the same as the movement Hamilton serial number HXXXX in the range of H2000 through H3500.  The 540XXXX serial numbers don't show up as an Illinois serial number and the overall construction is slightly different, so they are believed to be uniquely Hamilton-produced movements.

Although most collectors today favor the larger 16 size or 18 size railroad grade pocket watches, the 21 jewel 12 size 400 models dress pocket watches typically command a premium.  That's partly because of the case material but also because of the overall scarcity of the models - not to mention it's a very attractive looking movement.

The Tycoon series came in solid 18K gold cases in white, yellow or green gold, depending on the model.  The Tycoon line was produced through 1934.

The Great Depression hit the high end watch market hard and eventually the remaining inventory of grade 400 movements was used in award watches with gold filled cases.  By that time the newer 12 size grades like the 917, 921 and 923 were being produced and the 400 inventory needed to be phased out.

Up until now I had actually never seen a 400 series movement first hand so I was happy to take on a project from a fellow collector when he managed to find one.

The model he landed was a Bok.  The Bok is likely named after Edward Bok, a well known editor of the Ladies Home Journal and Pulitzer Prize recipient from the 1920s.  You can thank Edward Bok for the term "living room" - as prior to that the space in your home was typically referred to "the parlor" or "drawing room". 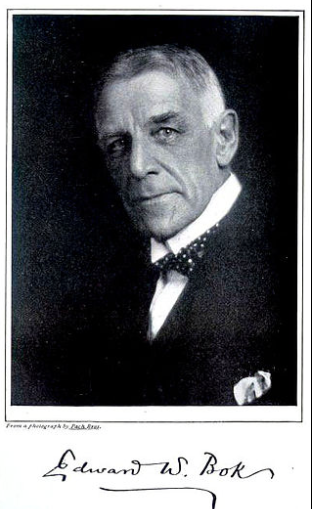 The Bok is a futuristic model in my opinion.  Why?... well you could say the model was the inspiration for Hamilton pocket watches for the next 30 years.  In fact, at first glance, if you didn't know any better, you'd expect the Bok to contain a 917 or 921 movement, 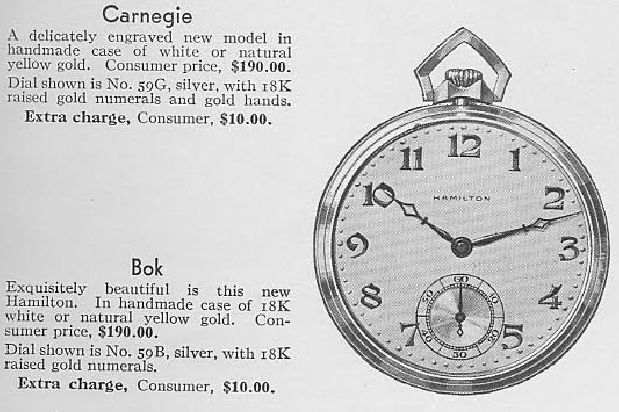 As received, my project watch looks like it was stored in a time capsule.  It's got some light wear, so it's not "showroom new" but all of the edges are sharp - especially for being solid 18K yellow gold.  The sterling silver dial has "raised gold numerals" and a pearlized track, you'd expect this watch to have been made in the 1940's or 50's... no?

The 400 is also Hamilton's first positive set men's pocket watch movement.  That means the stem is retained in the movement and not in the case. 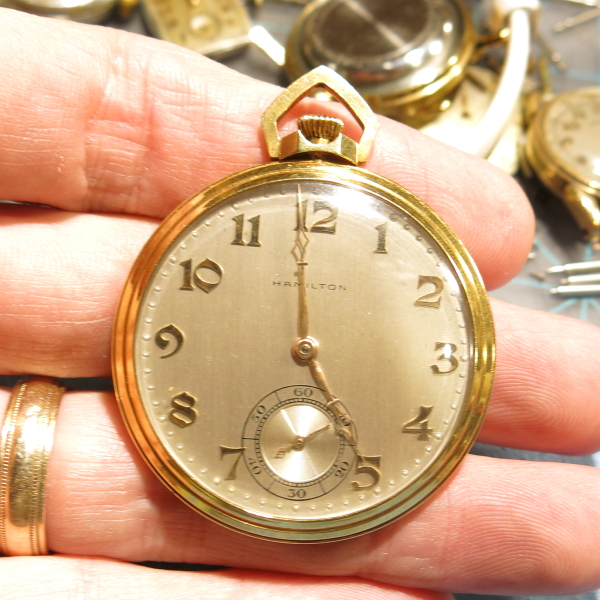 The case back is engraved with the original owner's initials. 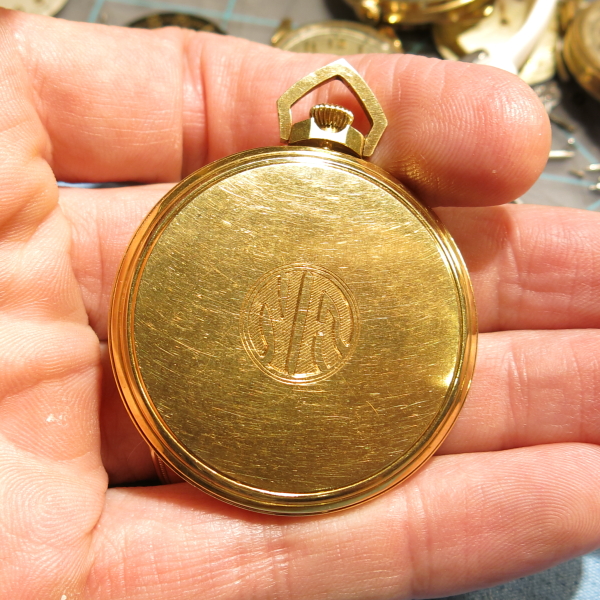 Check out this movement... very pretty, isn't it?  It has solid gold jewel settings. 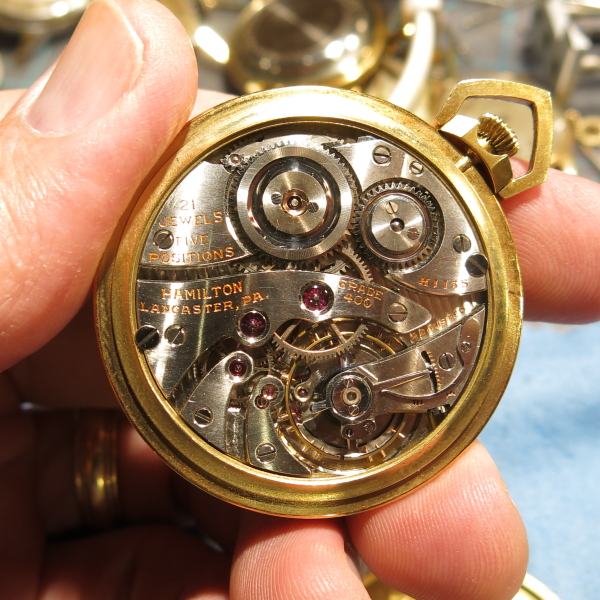 You don't find too many 18K gold pocket watches in Hamilton's line up.  Only platinum would be higher end. 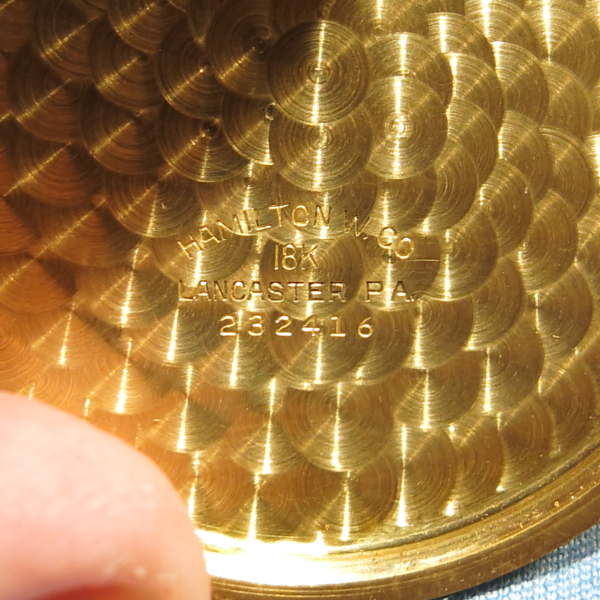 The first thing I noticed is there are no dial feet screws on the circumference of the main plate.  There are none on the back either.  What's holding this dial on? Hmmm...  I've never seen this sort of set up before. 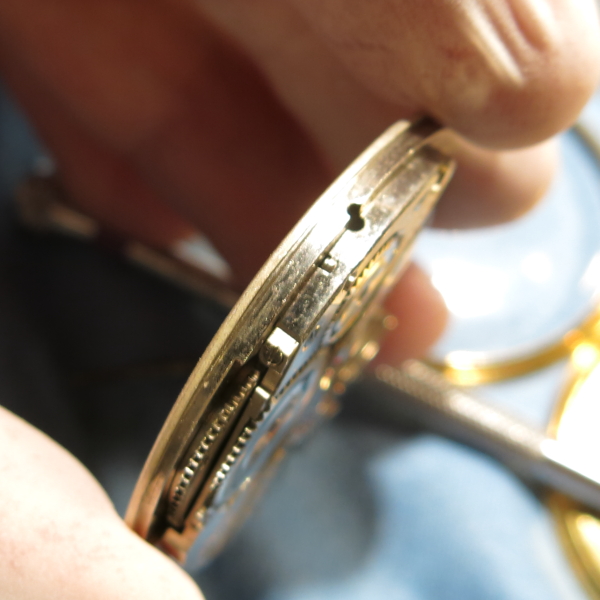 Well, it took some research and an email to a professional watchmaker friend to determine that the dial is held on by friction.  The dial has a lip going around it like the lid of Pringles can.  Supposedly all I have to do is pop it off without totally screwing up the dial... should be nothing to it - right?

Eventually I realized if I held the movement in my movement holder I could use my hand press tool to slowly work my way around the perimeter of the main plate and pop the dial off.  I decided to remove the balance first - just in case - as the last thing I needed to do is break the balance staff. 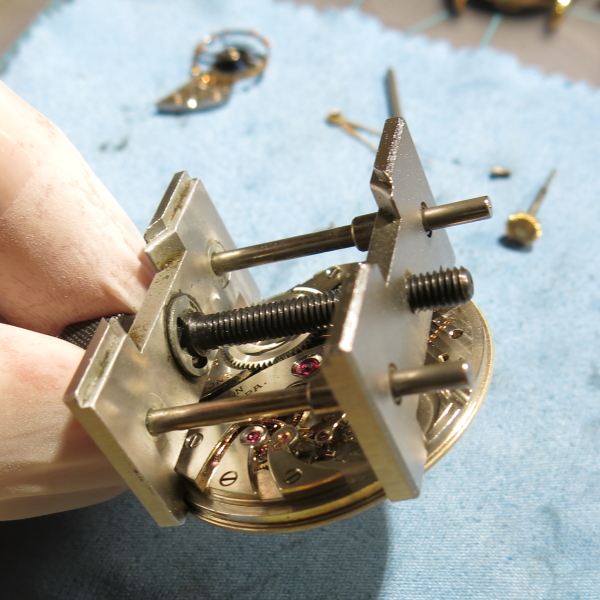 Success... the dial landed gently on my work surface and in a Pinocchio sort of way is saying, "There are no feet on me..."  I've never seen this type of dial set up on any other Hamilton model.  Hopefully it will go back on as easily. 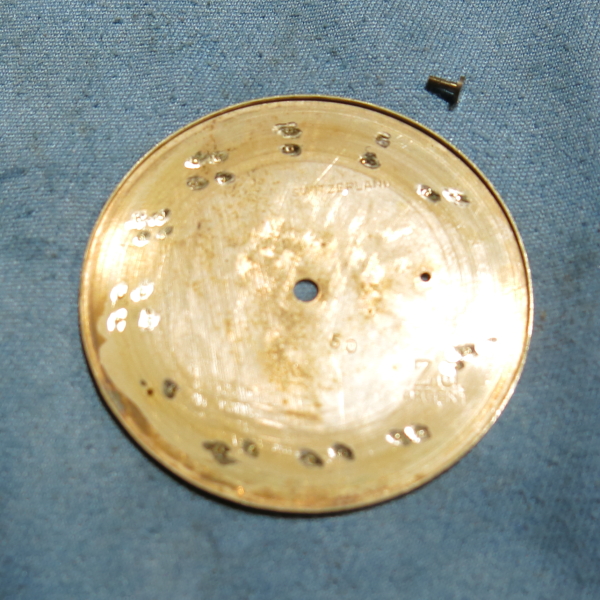 Sure enough, this is an early 400 grade and you can see the Illinois serial number that dates this main plate to the early 1920's. 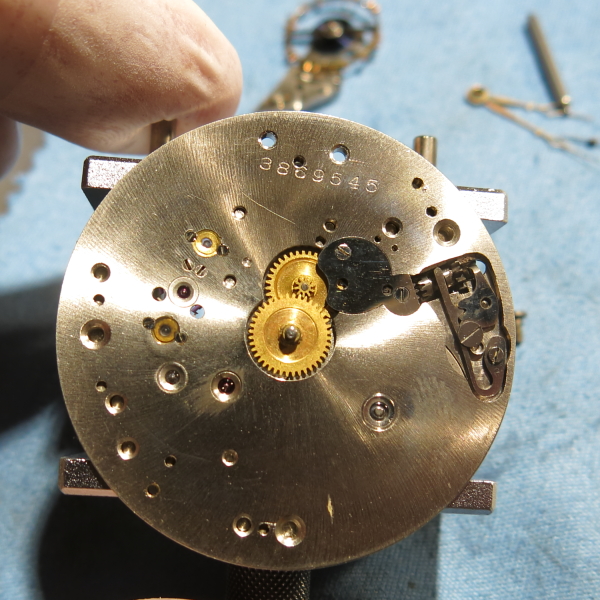 While the main plate is facing up, I'll go ahead and take the cannon pinion and setting wheels off. 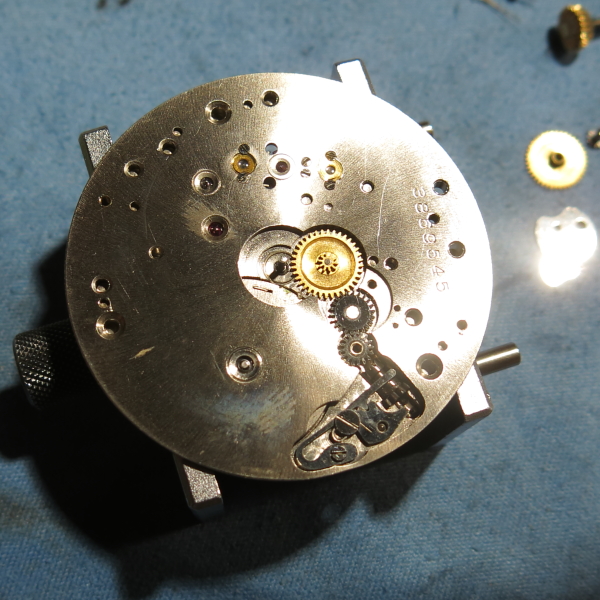 On the back side, the balance is already removed, so with the mainspring tension fully let off I can start to disassemble the gear train. 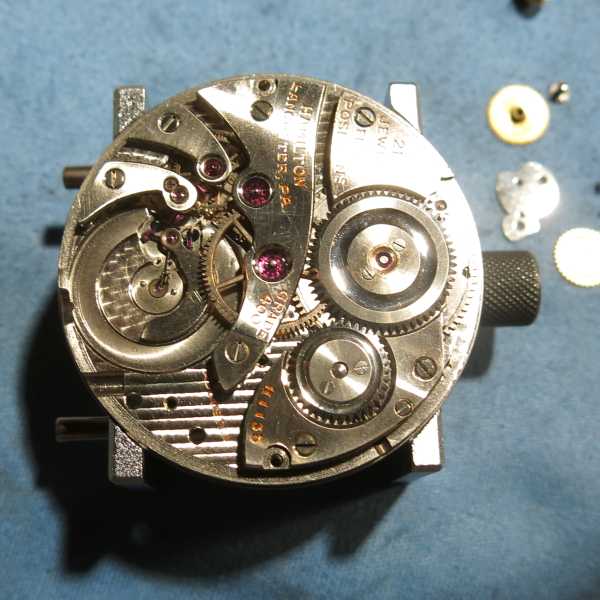 Notice this five-tooth click... very unique for a Hamilton model. 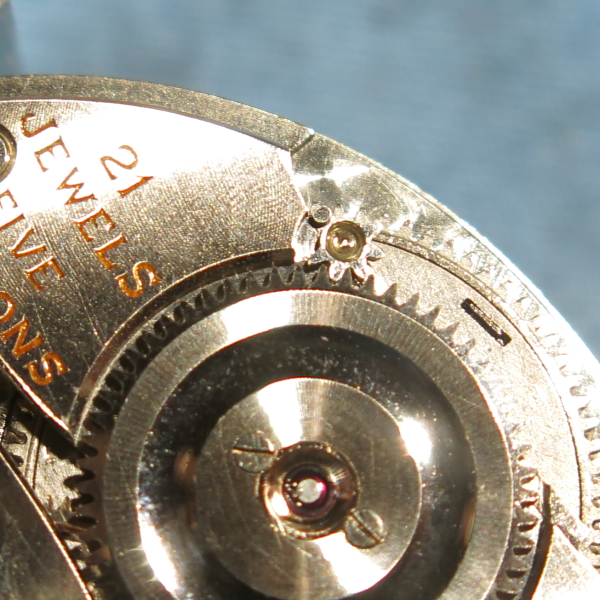 With the crown wheel and ratchet wheel removed you can see the barrel bridge is ready to be unscrewed and lifted away. 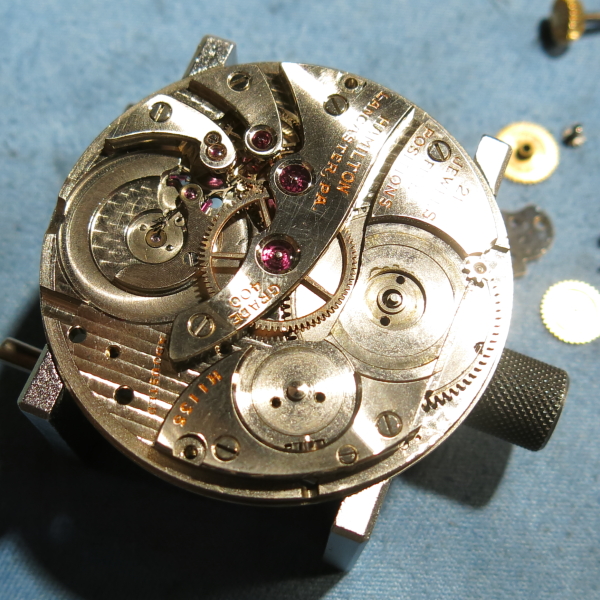 This barrel set up is called a motor barrel.  The arbor floats in two jewels, one on each end. 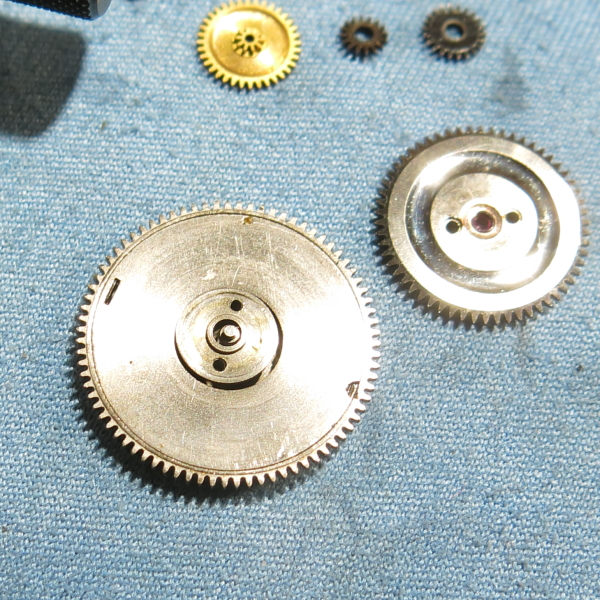 Next to come off is the train bridge for the center wheel and 3rd wheel. 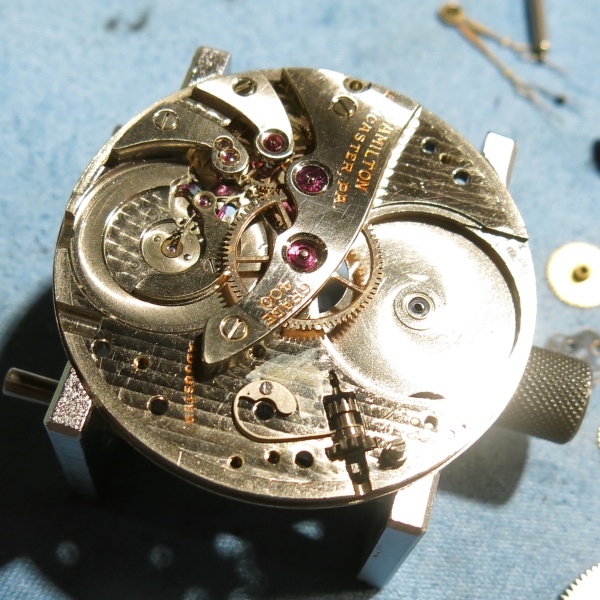 The center and 3rd wheels are free to be removed.  Two more screws secure the bridge for the 4th wheel and escape wheel.  That comes off next. 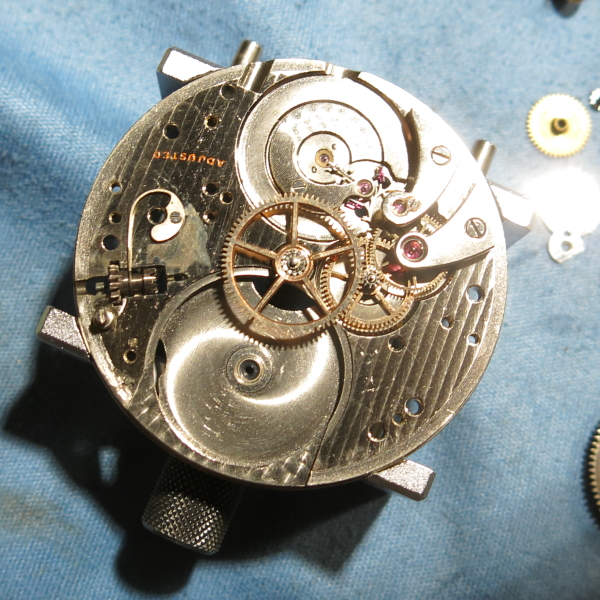 Finally I can remove the pallet bridge and all the parts will be ready to be cleaned in the ultrasonic. 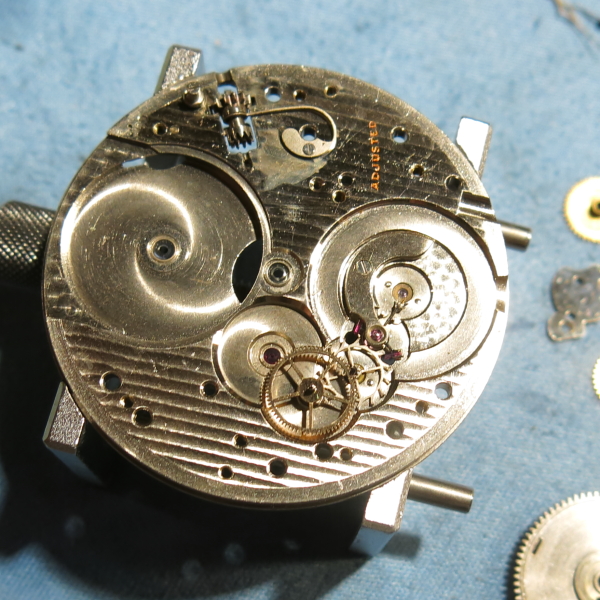 So far so good.  Everything is cleaned and dried.  Now I just have to put it all back together. 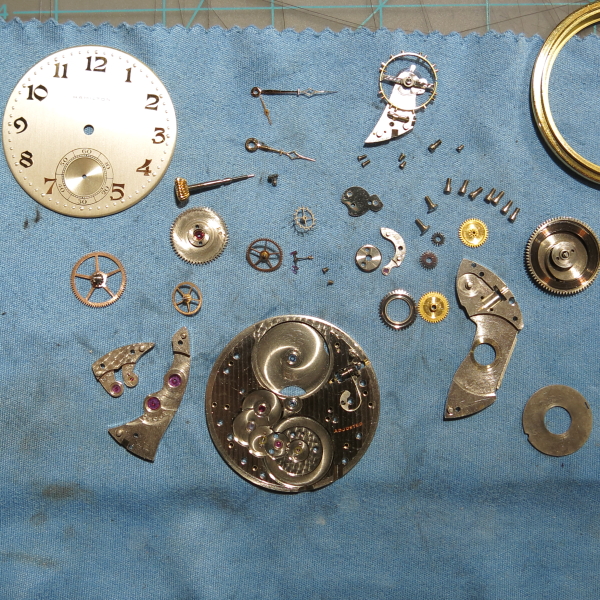 The train is back in place. Next on is the barrel and it's bridge. 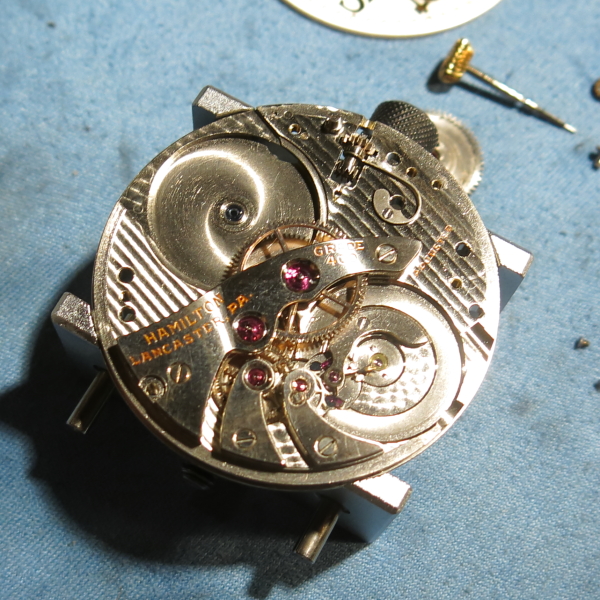 At this point I can wind the watch and energize the mainspring.  I could put the balance on next but before I do that I want to put the dial-side parts back on, including the dial.  That way I don't risk goofing up the balance when I try to pop the dial back in place. 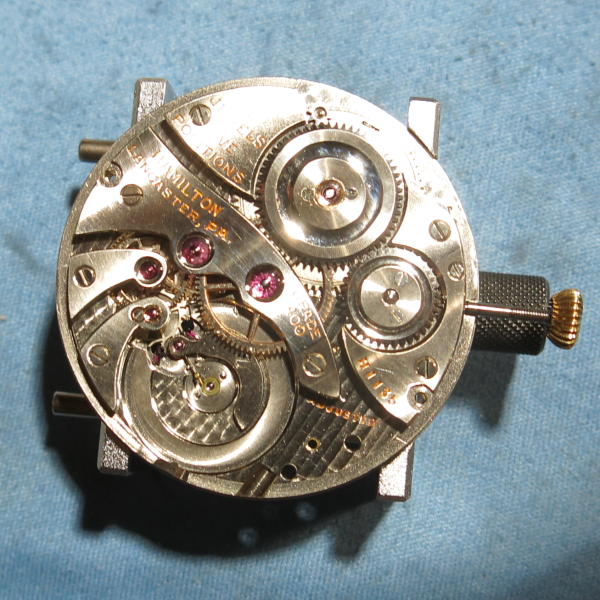 All the setting parts are back in place, including the cannon pinion and hour wheel.  Now I just need to press the dial back on and make sure the second hand bit is centered in the hole. 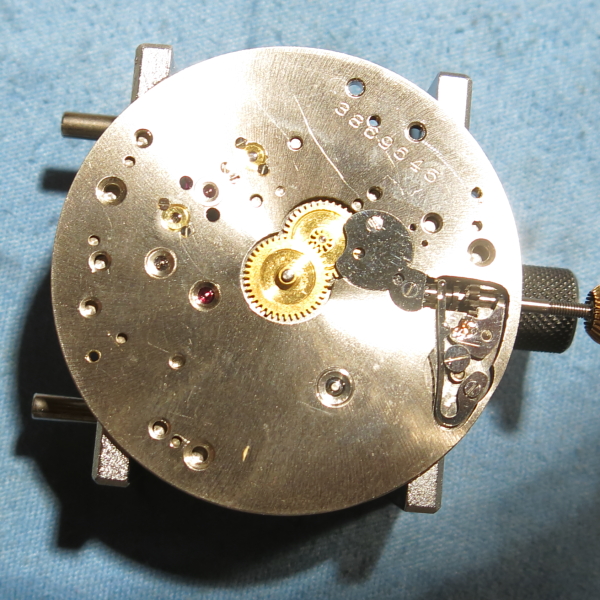 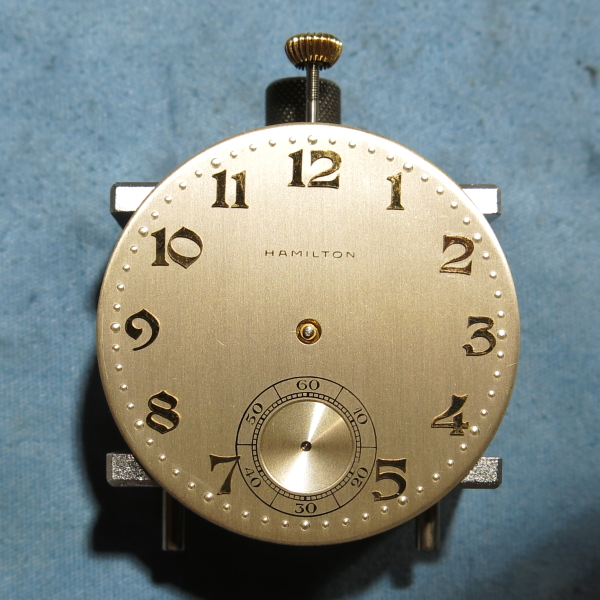 Going nice and easy got the job done.  You'll see in my photos that I'm wearing finger cots to make sure that I don't get any finger prints on the dial.

Now the balance can go back on.   Once everything is in position the watch should start running. 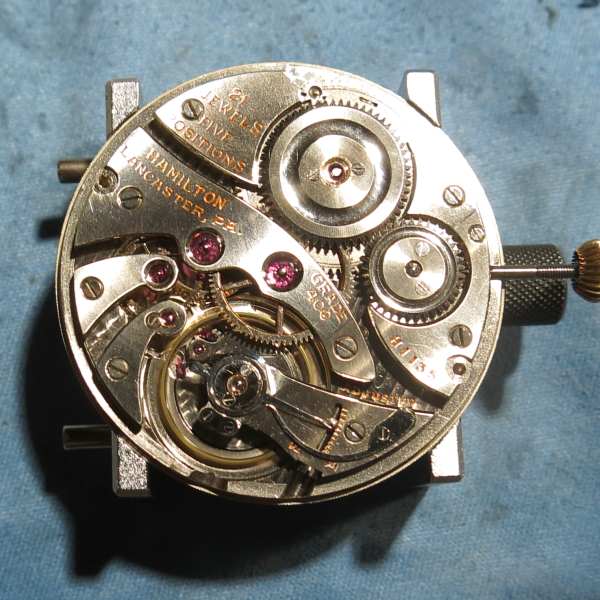 Hooray!  Running nicely, just a smidgen fast.  The micro regulator on the balance cock makes it hard to adjust the watch when it's installed in the case so I'll slow it down now. 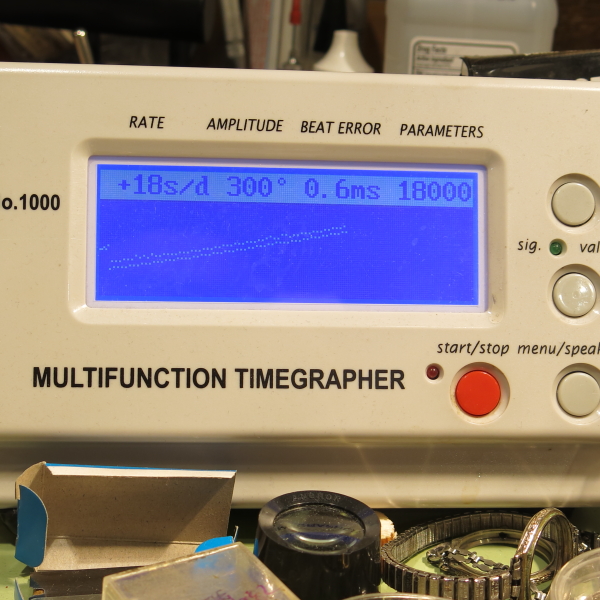 There... 5 seconds fast per day with great amplitude and an acceptable beat error.  Nothing wrong with this watch's time keeping. 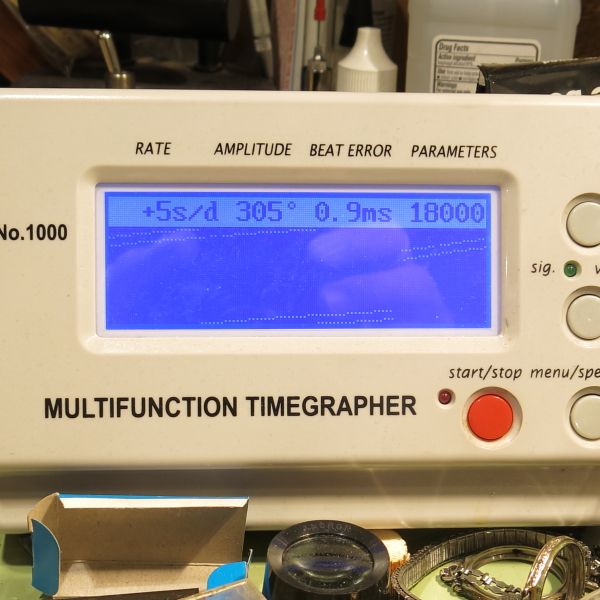 At this point the movement can go back into the case and then I'll put the hands on. 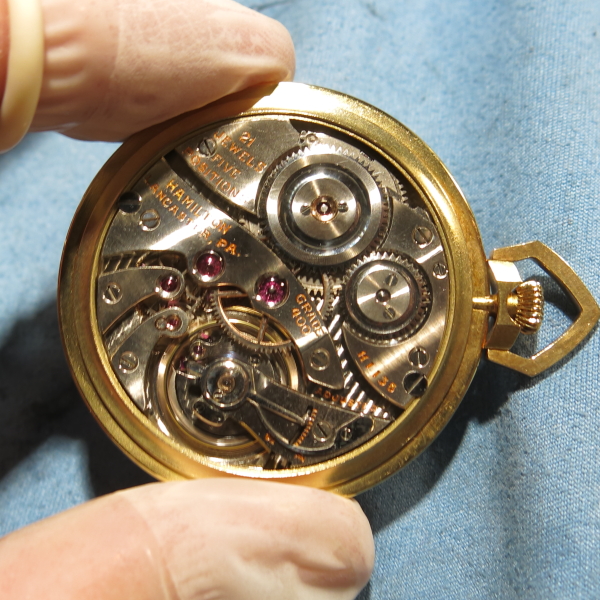 My project Bok even came with it's original box... or is that it's Boks?  Regardless, this is a super nice dress pocket watch and a definite keeper.  Too bad it's not mine. 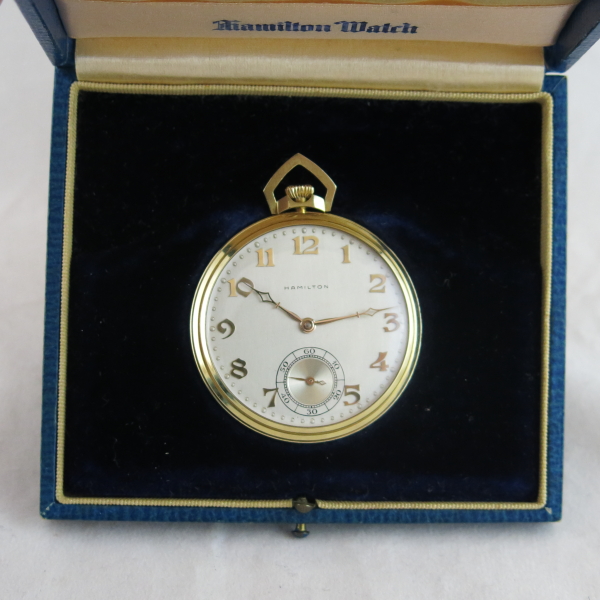 SaveSave
Posted by HandyDan at 9:17 AM