If rarity is desirable in a watch, then there is nothing more desirable than a personalized model.  Of course, that logic isn't quite complete.  A personalized dial alone doesn't necessarily mean a watch is desirable, even if it is the only one like it the world.  I suppose it really depends on who's name is on the dial and if it's your name it would be extremely desirable... no?

Hamilton thought so too and they even offered customers the ability to special order dials and use letters or figures in the spaces for the hour markers. Pocket watches were the most commonly personalized watches but eventually wrist watches were too. 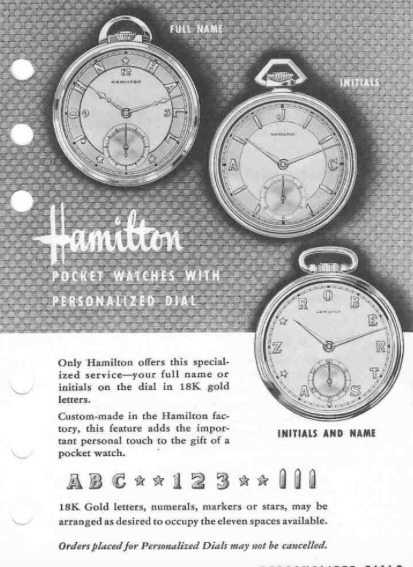 Schwalm dial made a LOT of dials for Hamilton and especially specialty dials.  These dials could feature applied gold figures as well as "flush gold" or simply printed dials.  Flush gold looks like gold leaf where the gold figures are very thin but not printed.

The most common personalized dials you'll likely come across are Masonic dials with Masonic symbols as the hour markers.  Don Aukamp is a fellow NAWCC member and worked at Schwalm Dial for many years.  Don and I have conversed about dials a few times and it's always interesting to hear the experiences of someone who lived through Hamilton's heyday.

Here's a photo that Don shared with me with a variety of Masonic dials from the early 1970s.  I think it's from the 70's since some of the dials are for day & date models. 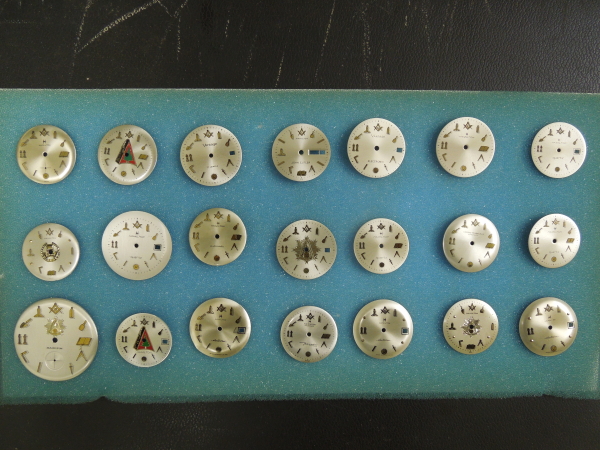 I've seen a lot of interesting watches with organization logos on the dials.  Whether it's Chevrolet, Mack Trucks, Budweiser or just a generic company logo, I've often wondered where the dials came from.  I suspect the answer is likely Schwalm Dial, as they had a close relationship with Hamilton.

I recently landed an example of a personalized model and thought it would be a good topic for the blog.  The first thing that came to mind is "what model is this?".  It's a bit hard to say for sure but I suspect it's a Sea-Mate II.  This one is in need of a little TLC though, as it's not currently running. 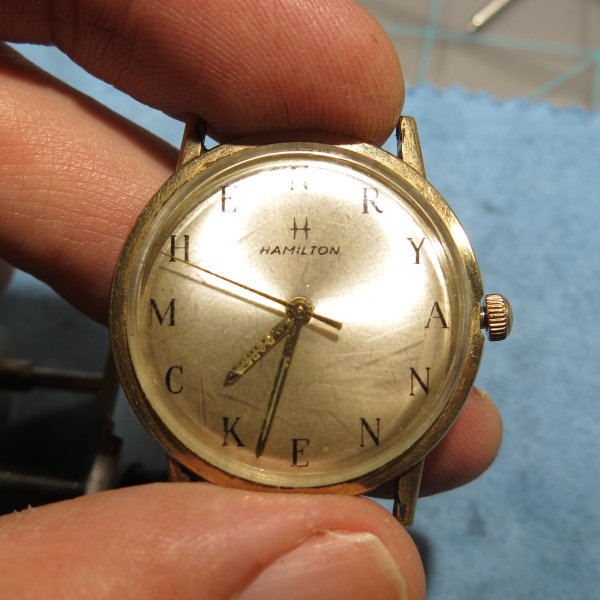 Flipping it over, I can see from the number on the back that it's from 1965. 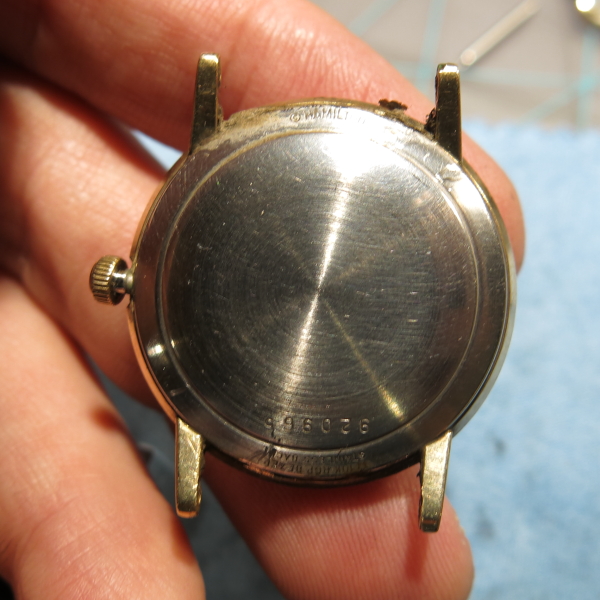 65 is the last two digits of the number, but it's upside down in the photo above.  If I flip it over and enlarge it you can see the 65 at the end of the string a little better.  65 is consistent with the Sea Mate II. 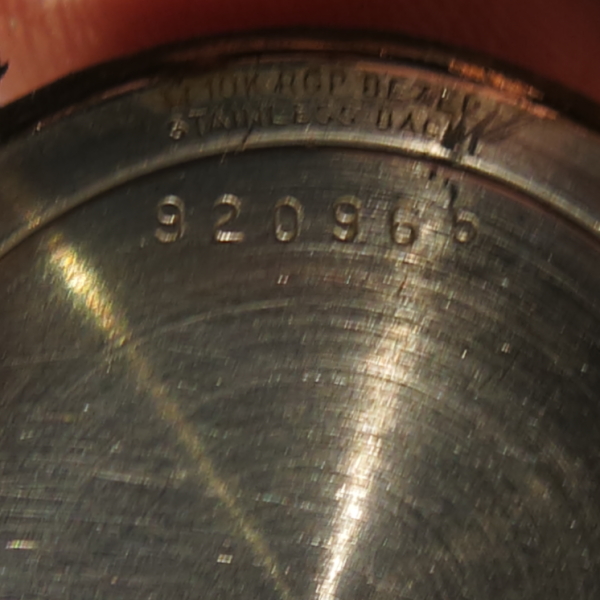 With the beat up crystal out of the way you can see the nicely radial finished dial is printed with letters.  What does is say though.... Ryan something?  If you look at it long enough you'll realize that the name is Henry McKenna. 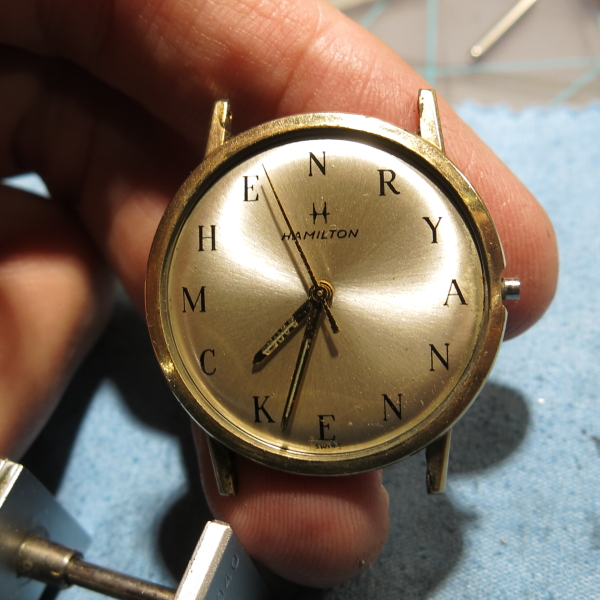 This watch opens through the crystal and I can see from the service mark inside that it's been to a watchmaker at least once in the last 50 years. 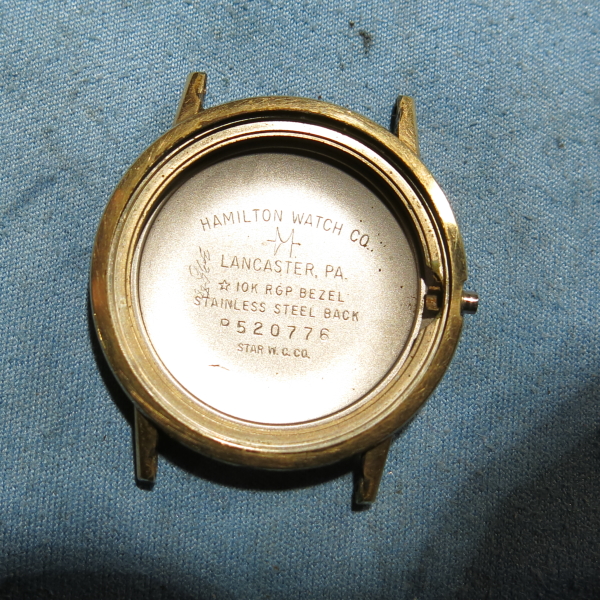 The movement is a bit dirty but nothing seems broken so hopefully a good cleaning is all that it requires. 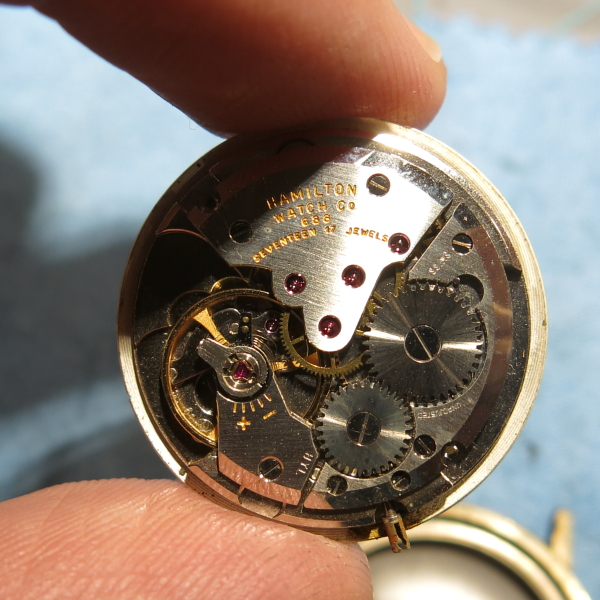 While the movement is in the ultrasonic I will measure the old crystal so I can get out a new one.  I need to covert 1.156 inches into millimeters.  Multiplying by 25.4 indicates that 29.4mm will do the trick. 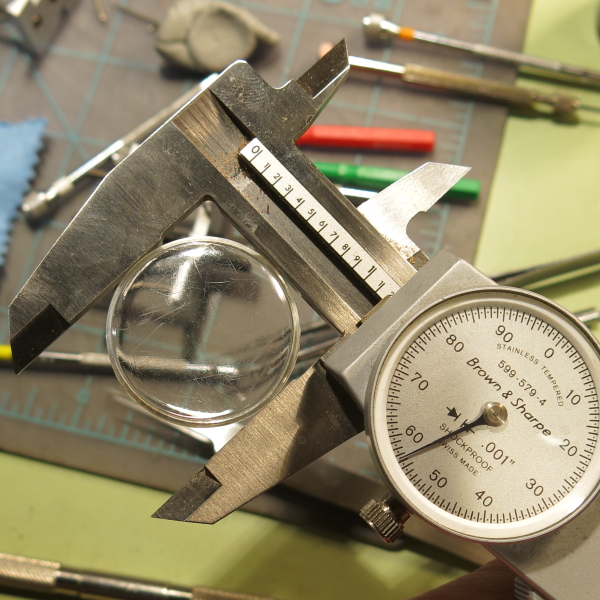 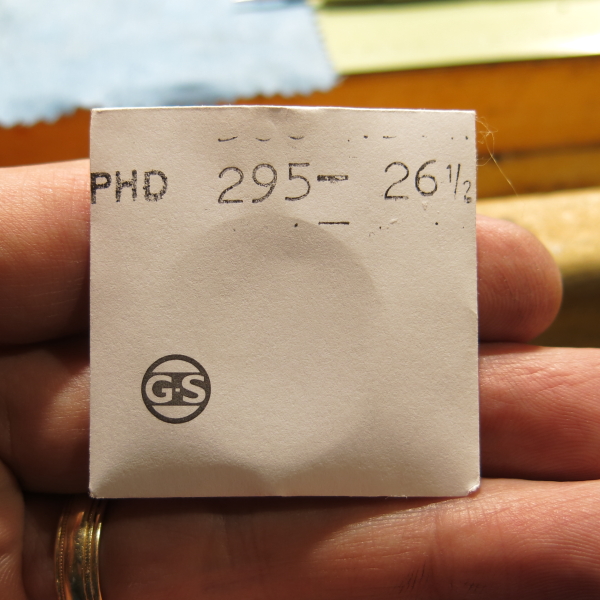 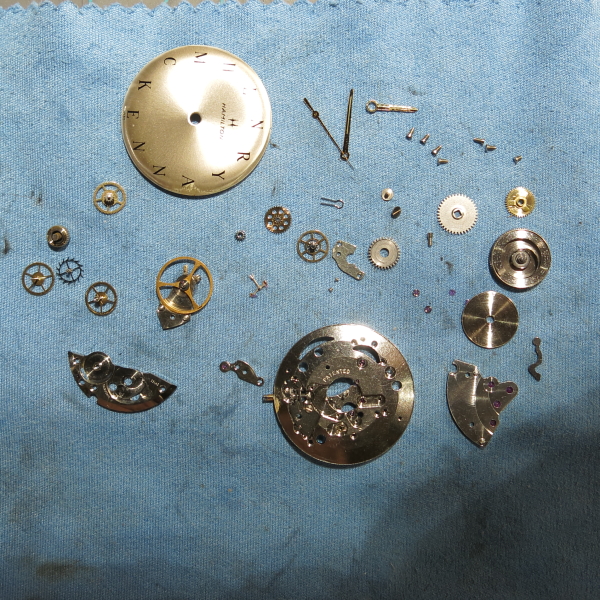 Well, it's running - but the beat error is too high and it's a little noisy so it's going to need some tweaking. 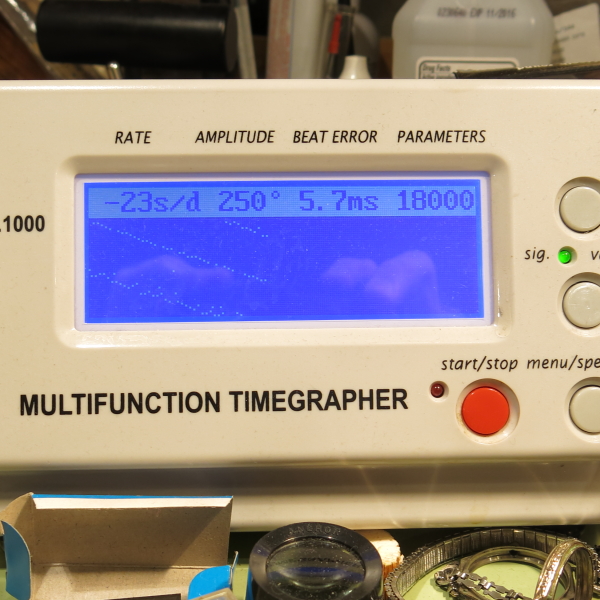 There... it's running much cleaner now.  I had to reclean the balance and then make some slight tweaks.  The amplitude of 222 is on the lower side of acceptable.  I like to see the amplitude be over 250 degrees but 200 is my lower spec limit.  It may pick up as the watch settles in. 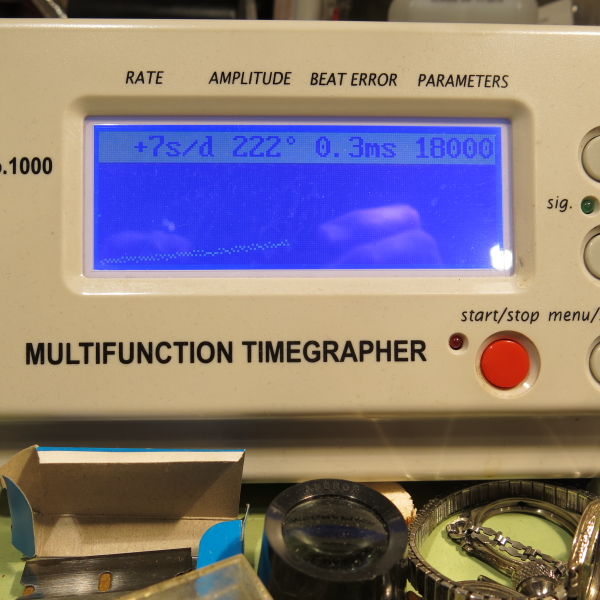 A new crystal and a fresh strap go a long way toward making this a sharp looking watch again.  Now I just need to find someone named Henry McKenna to offer it to. 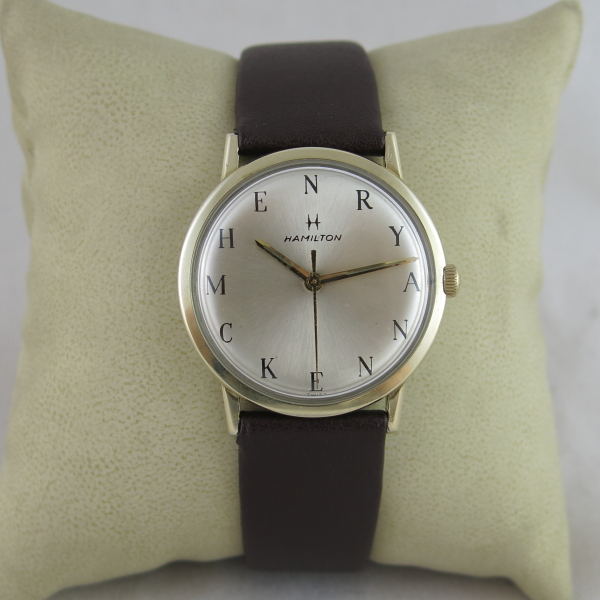 Of course, anyone who likes whiskey might be interested in this watch, as Henry McKenna is also a maker of bourbon. 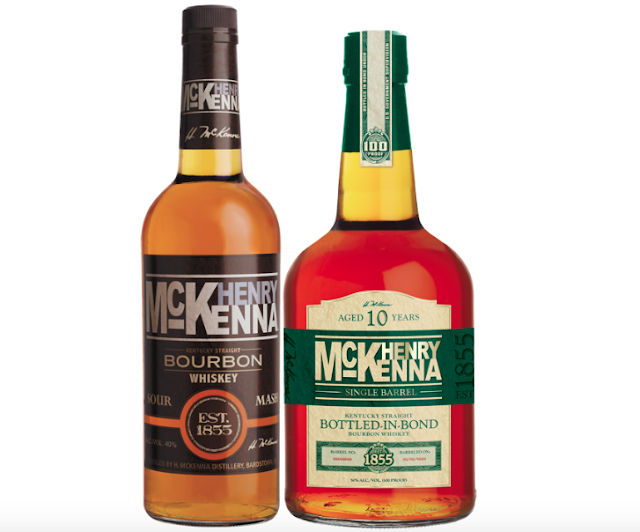