Some Hamilton models are meant to be paired with a bracelet and the bracelet is an integral part of the design.  In fact, there are a few solid gold men's and ladies models that came with matching solid gold bracelets. 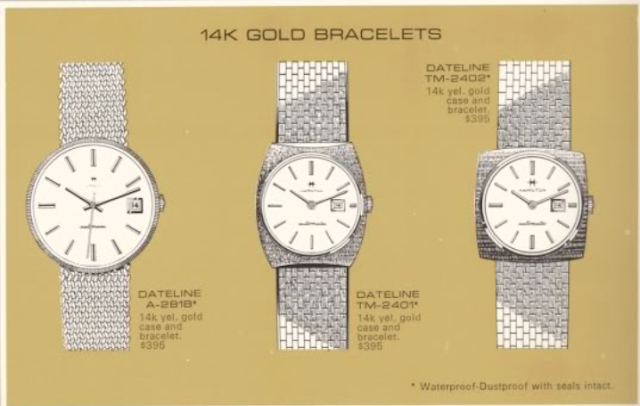 I suspect that more than a few watches met their demise when gold prices got high enough that people thought melting down grandpa's watch was an idea too good to refuse.

As you would suspect, a solid gold watch and bracelet would have been pretty expensive back in the 1960s but Hamilton offered similar models at a more modest gold filled price point.  Take, for example, the 1971 Thin-o-matic TM 4801 - it was about a third of the cost of solid gold models.  It was offered for two years. 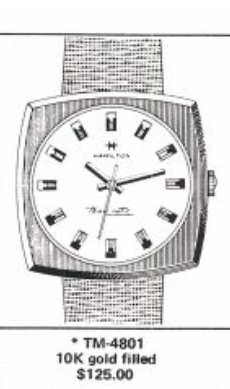 The 1970's ushered in newer movements with higher beat rates than the typical 5 ticks per second that watches had used for the previous 70 years.  At 5 beats per second, or 18,000 beats per hour, you could only be precise to 1/5th of a second.  Greater precision needs finer resolution so models evolved to 6 or more beats per second and sometimes upwards of 10 for "high frequency" models - that's 36,000 beats per hour.

A fellow collector recently sent me one of his TM-4801 watches.  As received is was in decent shape and appeared to run.  Although the second hand moved I don't think the minute and hour hands were moving.  So this watch has something going on inside. 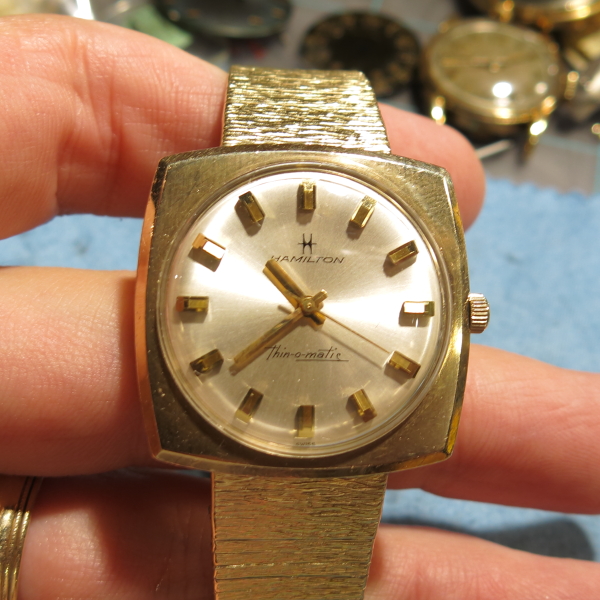 This is the first time I've seen one of these models with an integral bracelet so I wasn't sure if the bracelet was a part of the case or if they some how attached.  You can't tell from the catalogs how the bracelet functions but this one operates much like a strap and has a clasp to join the two sides. 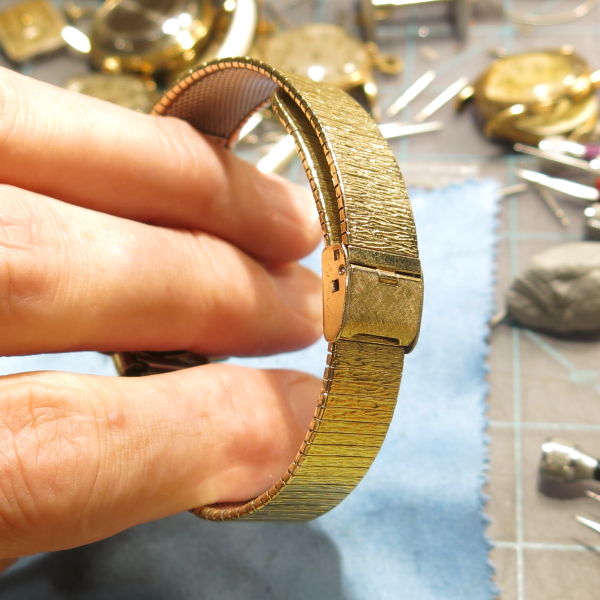 Looking at the back of the watch, you can see the bracelet hides traditional lugs and wraps over them to give the appearance the bracelet and watch are integrated.  You could put this watch on a strap but it would have to be very narrow to fit between the lugs. 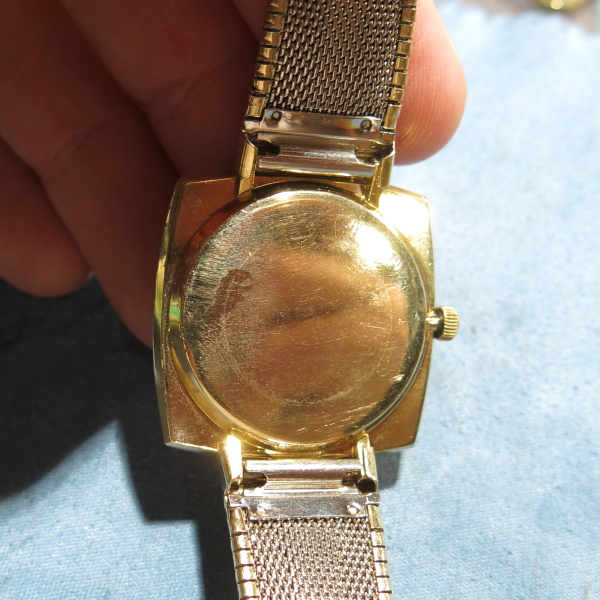 The TM-4801 opens through the crystal and the movement and dial pivot out until the two-piece stem releases.  The 628 is a 17 jewel grade and is similar to other micro-rotors but also different in several ways.  Notice there is no "center wheel" visible. 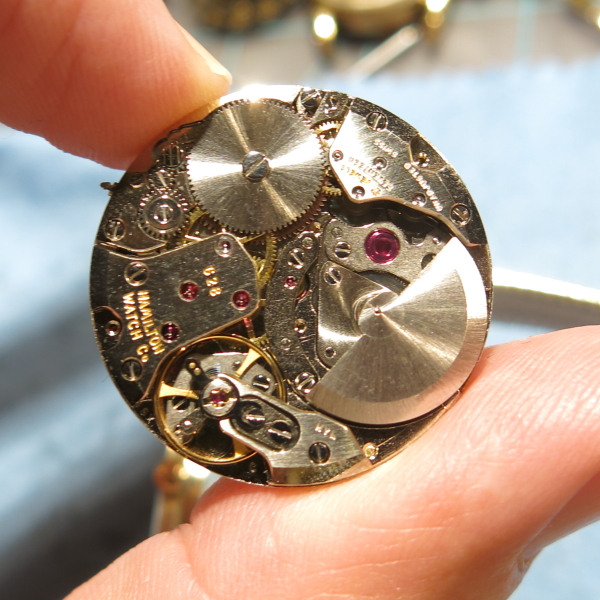 With the dial and hands removed, you can see the dial side of the main plate.  It looks typical of most watches but something is going on under the set bridge.  I'll have to take the two screws out to see how this watch works - but first I'll make sure the mainspring is relieved. 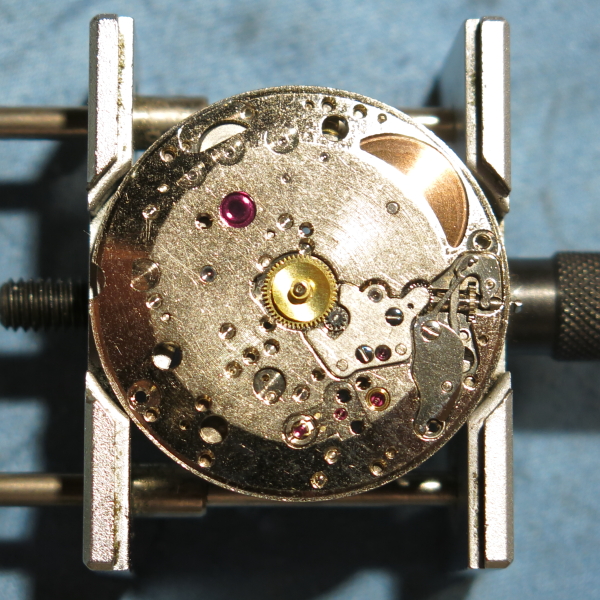 I removed the cannon pinion and hour wheel so now you can see the larger minute wheel next to two setting wheels and the smallest silver wheel is actually part of what would typically be called the center wheel - although it's not in the center in this case.  How does this watch work? 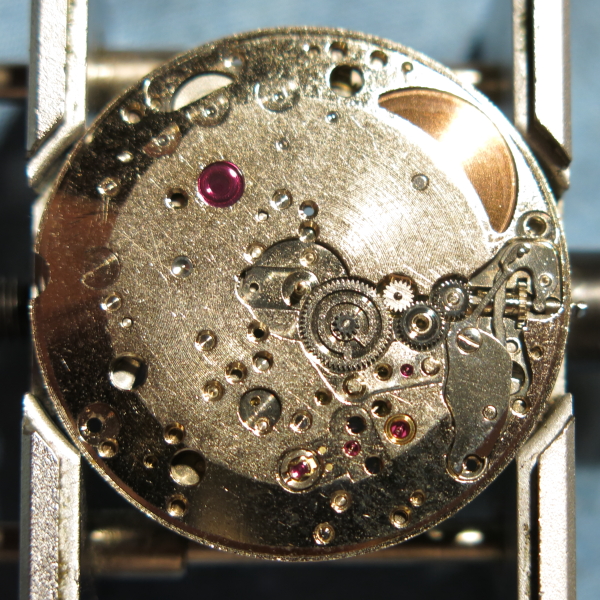 I've never seen this sort of setup before but I suspect the silver portion of the wheel shown below is actually meant to slide on the center wheel - and allow you to set the time as well as drive the hour and minute hands.  This part comes out the back of the movement and it's a good thing I let down the mainspring or all of the power would have been released when I removed the set bridge. 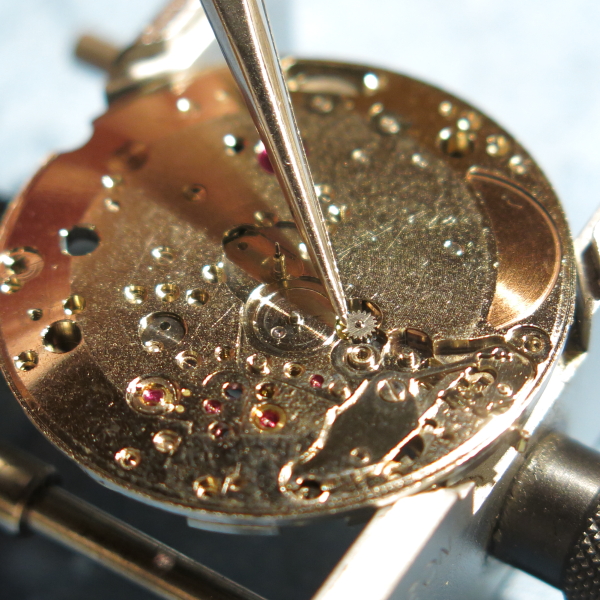 The center wheel is not supported by jewels, just bushings on the set bridge and the train bridge (below). 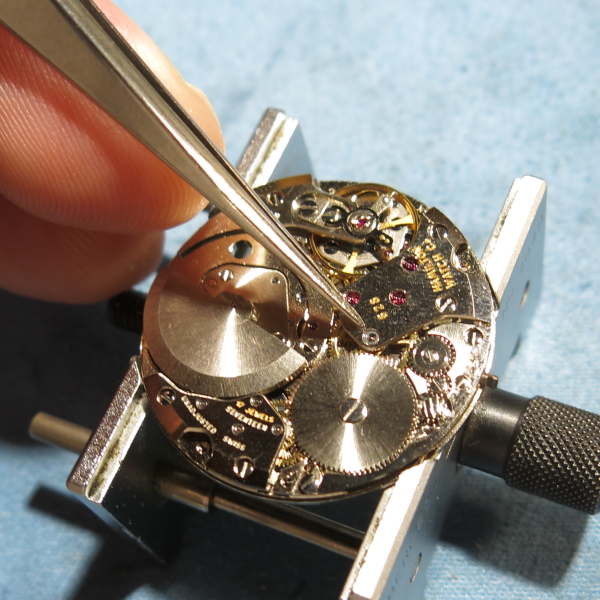 The first things I'll take off from the back are the rotor and the balance.  They free up about half of the real estate on the back of the movement. 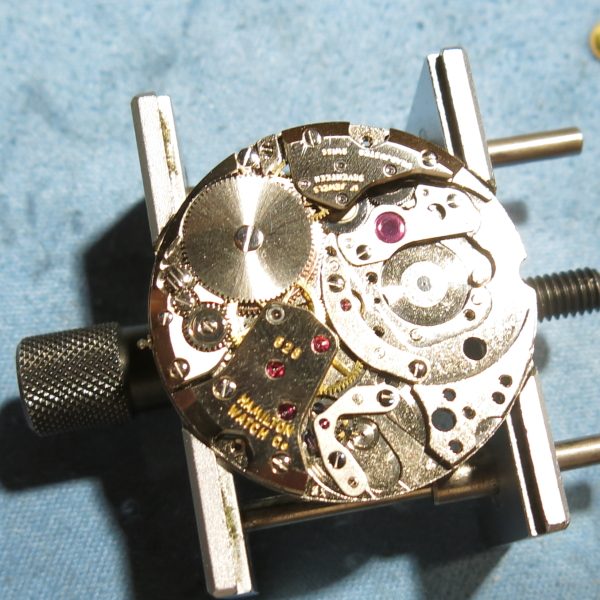 I pull the pallet fork and the ratchet wheel next, to make sure there's no power inside the watch. 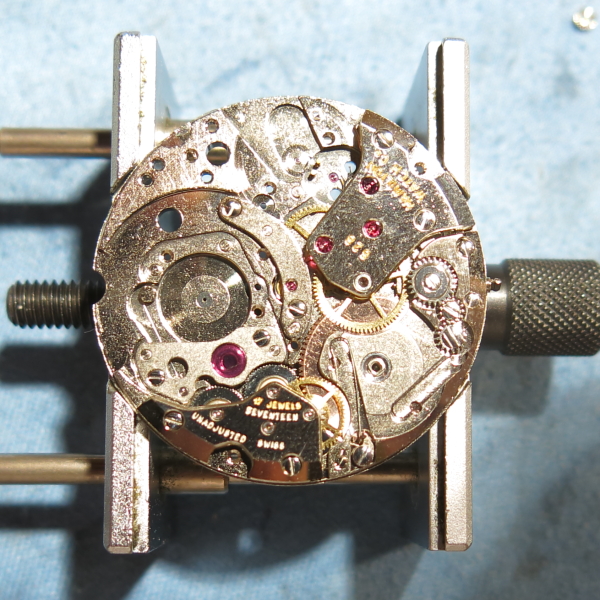 Now I can remove the barrel bridge.  The barrel itself is stuck inside the movement until I remove the wheels that are covering it.  One is the center wheel and the other is the winding wheel for the automatic gear train. 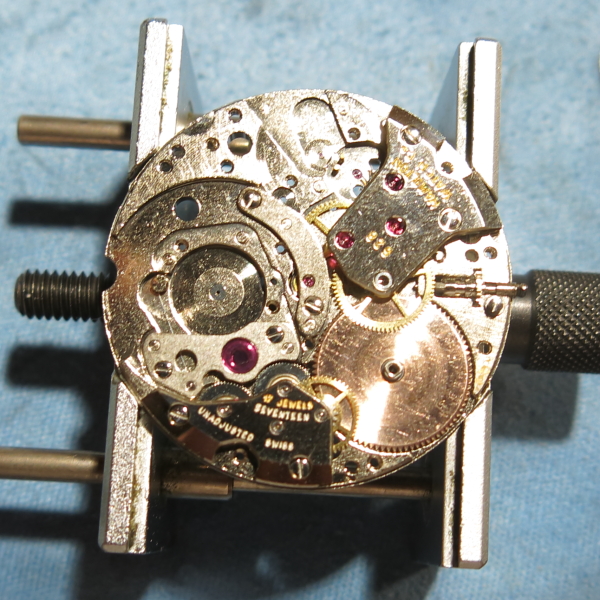 Two screws hold the automatic gear train bridge in place so once that's out of the way I can pull out the five wheels used to transmit power from the rotor to the barrel.  One of the wheels is under the  large pink jewel.  That wheel floats inside the watch and allows the watch to wind regardless of the direction the rotor spins. 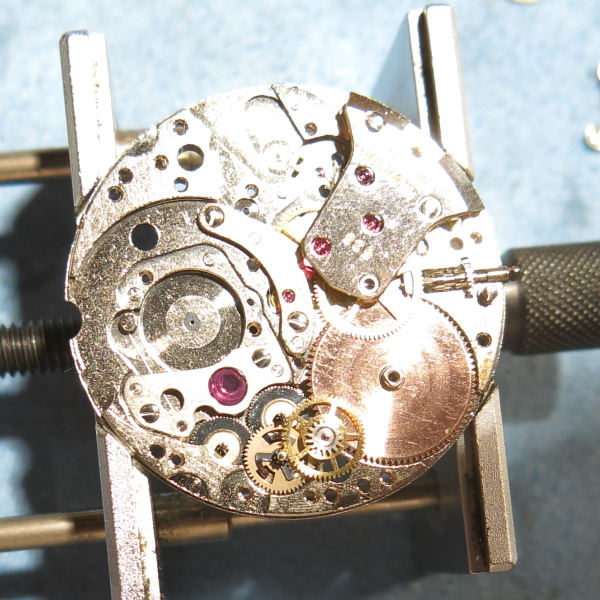 Now I can remove the two screws that hold the train wheels in place. 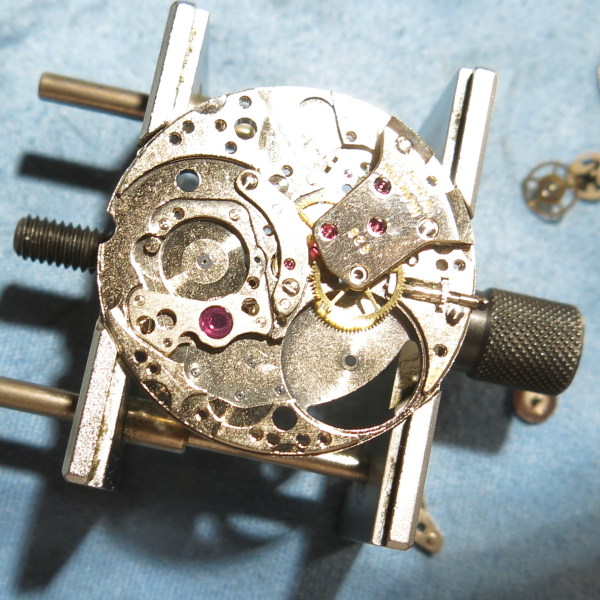 It's good to take photos like this so that I know how these wheels are supposed to nest together.  There's a tiny seconds pinion in the center of the movement with it's own bridge supporting it. 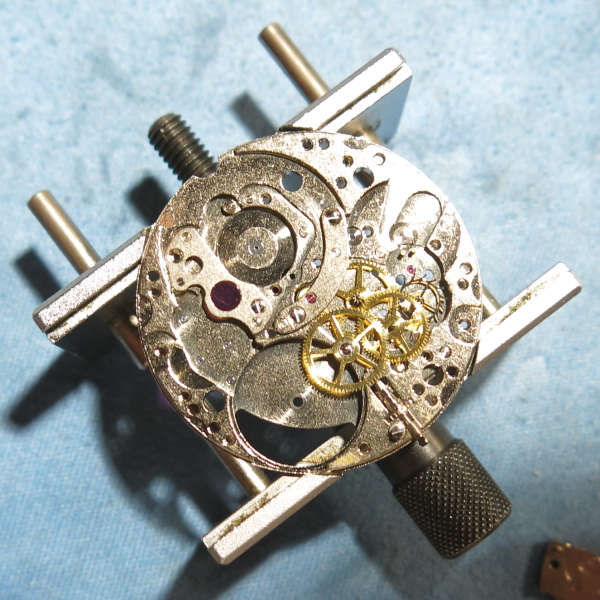 Everything is now off the main plate and it can all go into the ultrasonic cleaner. 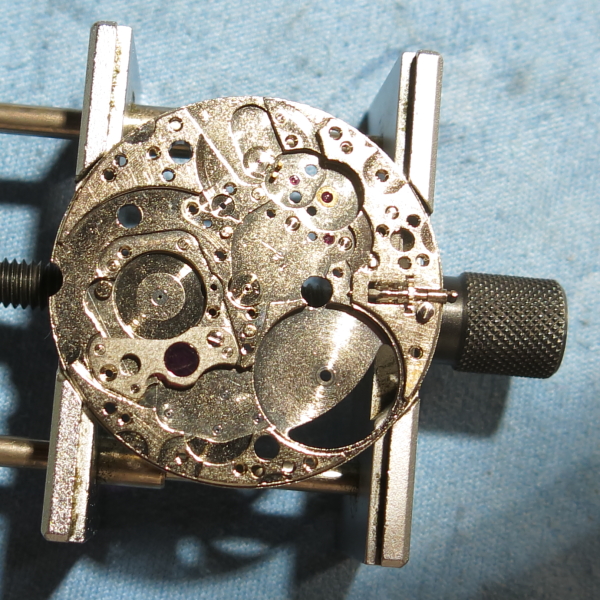 While everything was drying I spend about 30 minutes on my hands and knees looking for the seconds pinion.  It flipped up into the ether when I grabbed it with my tweezers.  I felt it hit my elbow - good thing I was wearing a short sleeve shirt.  Look how tiny this part is... but it's important if you want to have an operable second hand. 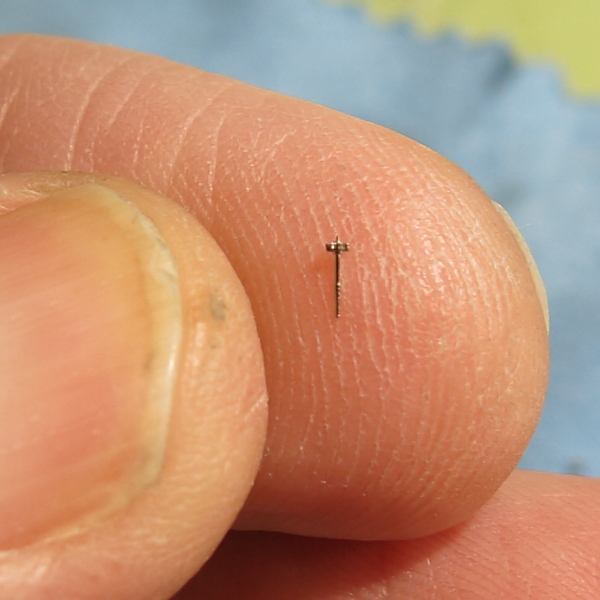 Phew!  All parts present and accounted for.  Time to put it back together. 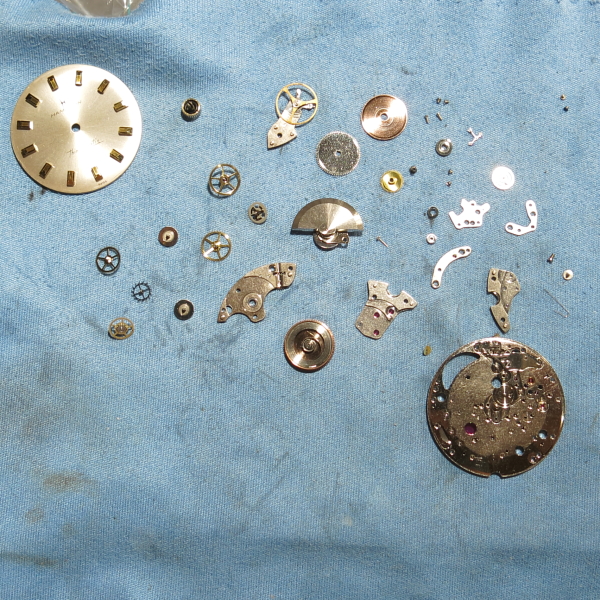 Alright... almost there.  I can now wind the watch and put the balance back on. 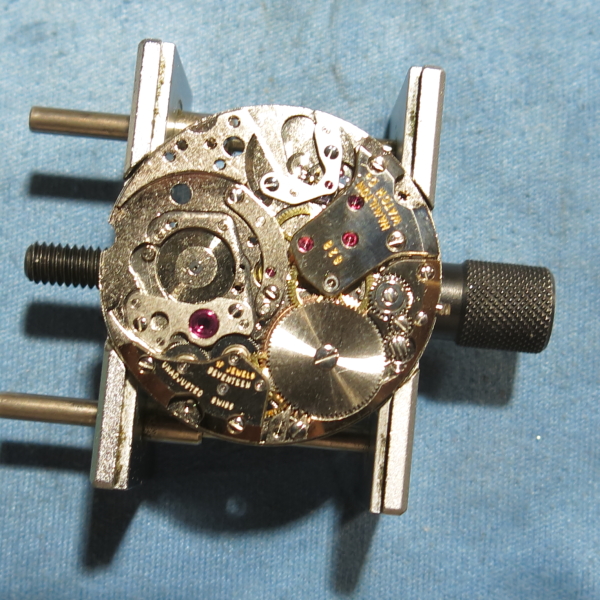 The watch is now running.  That's a bit of a relief - these micro-rotors are very complicated. 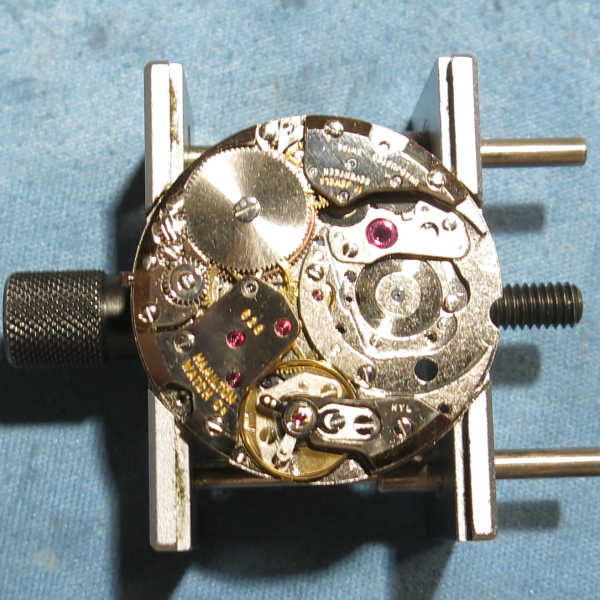 Hmmm.... this beat rate is too fast so it doesn't really matter what the two lines look like.  I'll re-clean the hairspring, perhaps a couple of the coils are sticking. 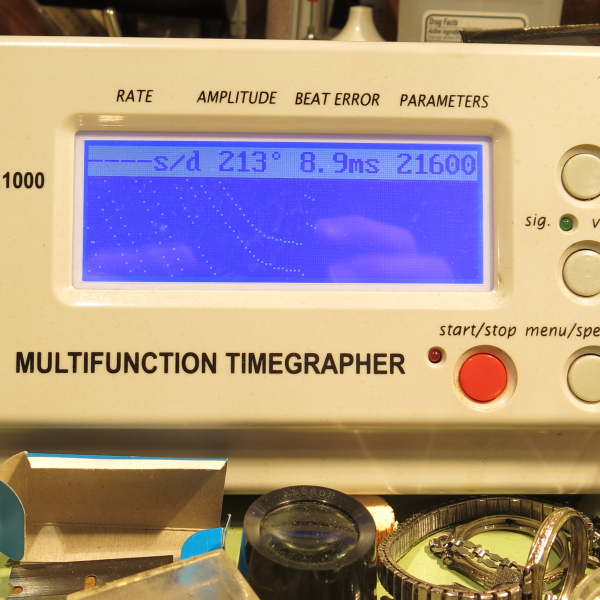 Alright, getting warmer.  The beat error is a bit too high but the rest is looking better. 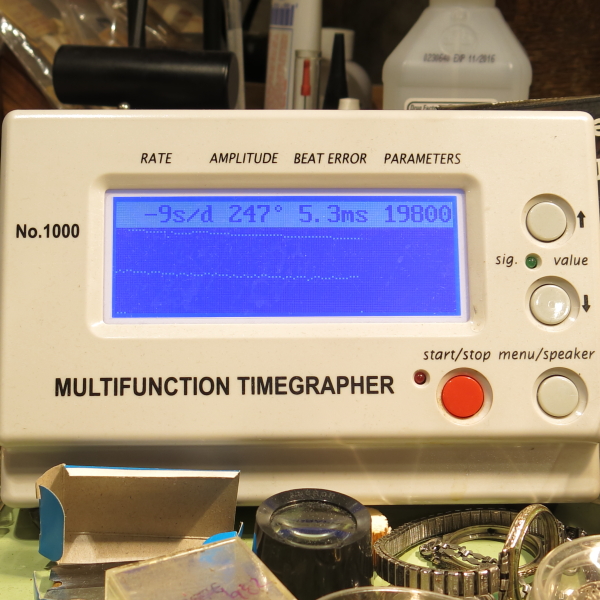 Adjusting the beat error is proving harder than I expected but I'm getting there slowly but surely. 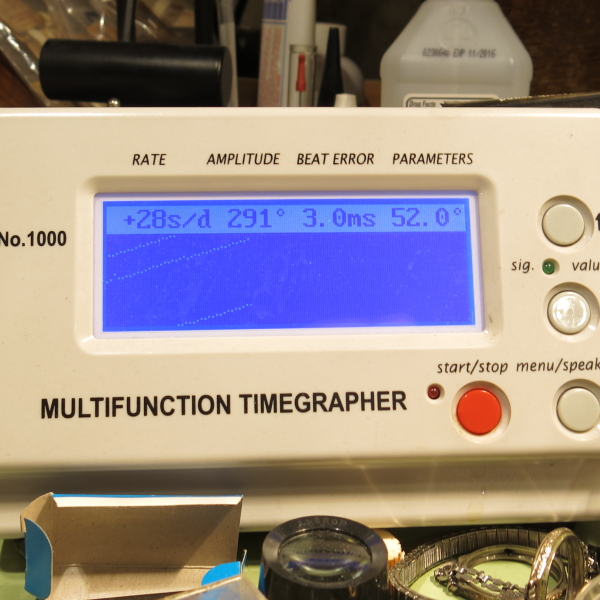 A man's got to know his limitations... this will have to do. 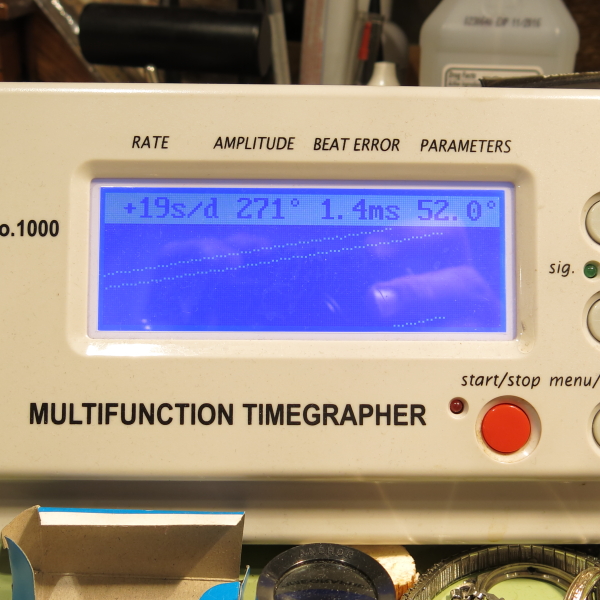 Now I can put the rotor back on and then flip the watch over and install the dial and hands. 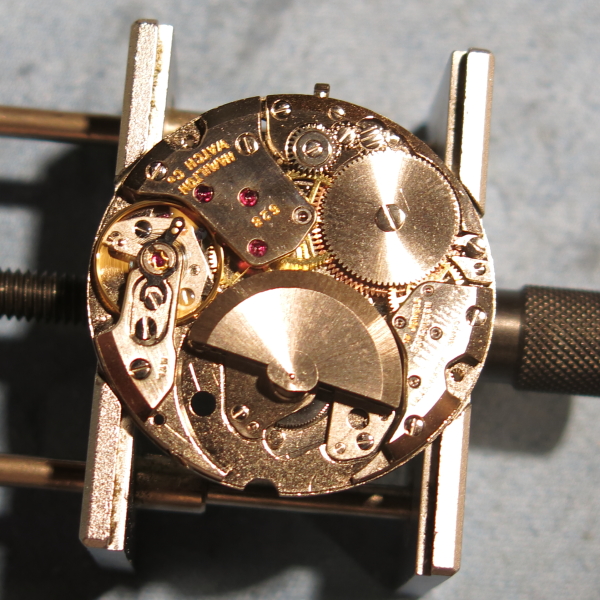 Ta da!  This watch was a real pain in the arse and I think I may have to get some therapy before I tackle another micro-rotor.  It looks pretty good though.  I ended up having to change the center wheel with another from a spare - as the original wheel was slipping and that's why the hands wouldn't move with the watch.  The watch looks and runs just as it should now. 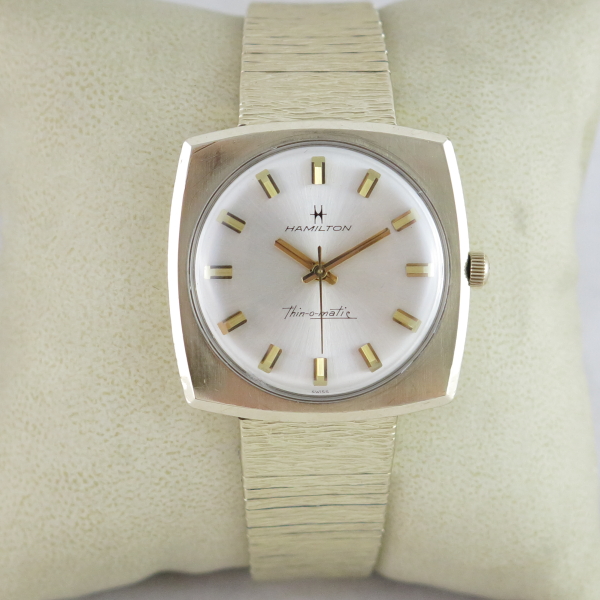