Most Thin-o-matics use micro-rotor movements to achieve their "thin-ness".  In addition to being thin, micro-rotors tend to be larger too.  So Thin-o-matics can have a pleasing "wrist presence" as a dress watch, even by today's standards.

However, not all Thin-o-matic models used micro-rotors.  There are a few models that used an ETA-based movement with a traditional oscillating weight mechanism on top of the basic manual-winding movement.  One of the models is the 1964 T-412.  It was produced through 1967. 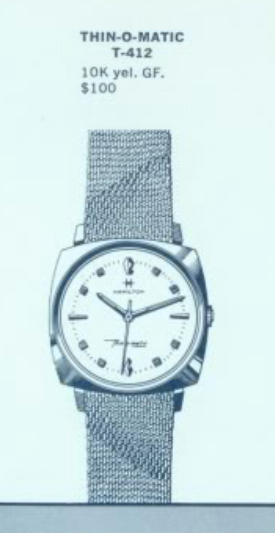 The T-412 came in a 10K yellow gold filled case - hence the 400-series number.  It's style harkens back to Hamilton's very first wrist watch, the Men's Cushion from 40 years earlier since it has a cushion shaped case with a round bezel opening.  Of course, that's where the similarities stopped.

Inside the T-412 you will find a Hamilton 623 movement with 17 jewels.  This movement was made by ETA, although I don't know the ETA calibre specifically.

I was able to snag a very nice T-412 project watch recently, and I was happy to get it since I haven't done one of these movements yet.  I try to show the overall process for each movement in a close to step-by-step fashion and put the posts in my "overhaul examples" folder on the right of the screen.  So I'll go into a little more detail than usual on this post.

As received the project watch is in great shape.  It could stand a new crystal and some polishing of the case but dial looks superb. 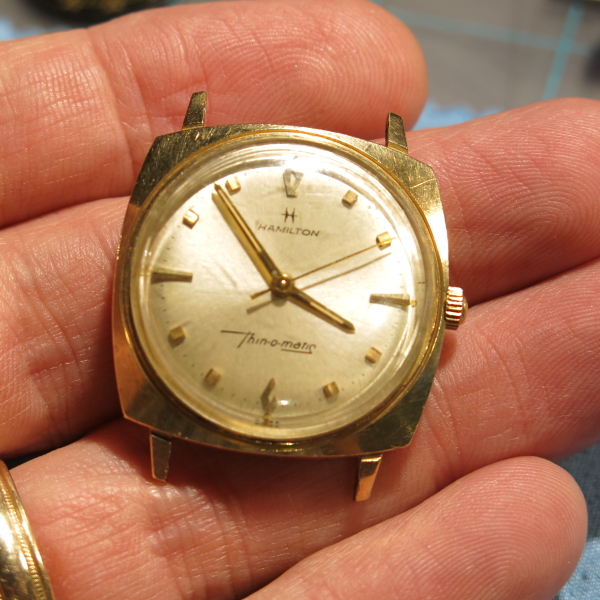 A non-micro-rotor Thin-o-matic is easy to spot since the back is not flat.  This pie-pan shape is a tell tale sign that there's a ETA movement under the hood.  This case is a one-piece design and opens through the crystal with a tool I call "the claw". 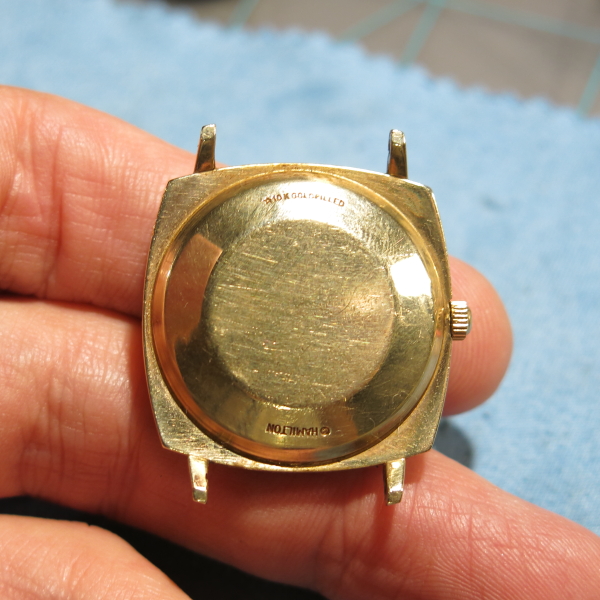 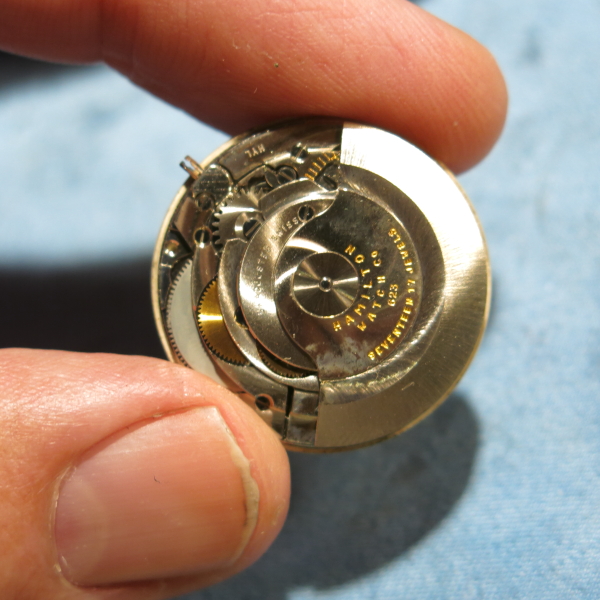 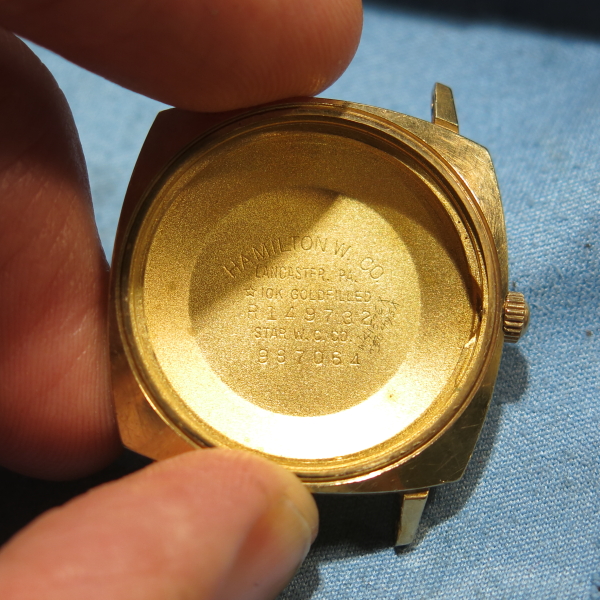 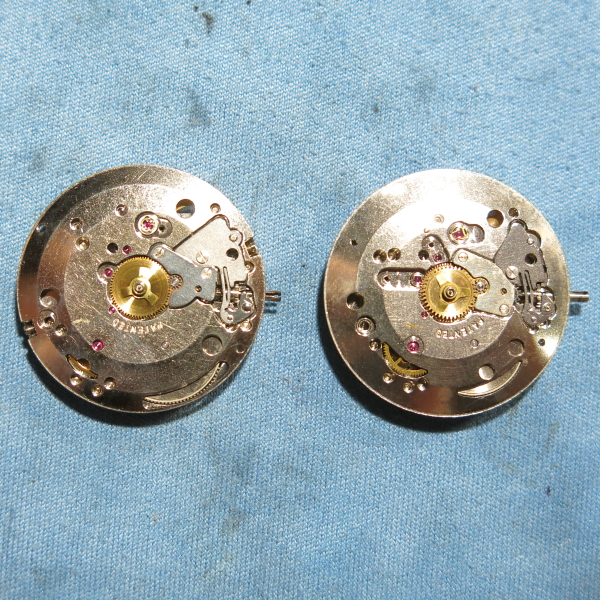 From another angle you can see the 623 is considerably thinner and a lot of the difference is in the rotor assembly. 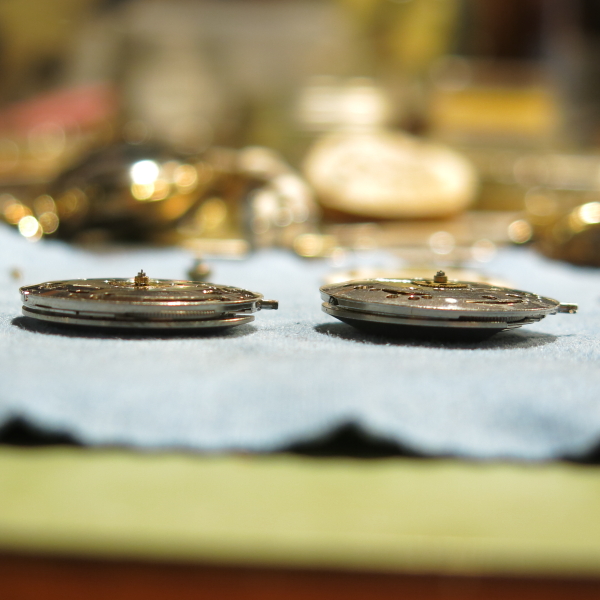 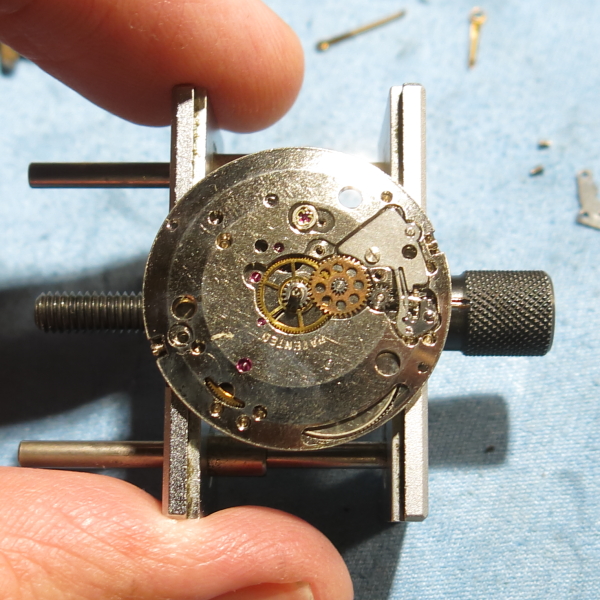 With the parts removed from the from, I can turn my attention to the back.  Two screws hold the rotor assembly in place.  Once they are removed the automatic portion of the watch can be lifted straight up and off. 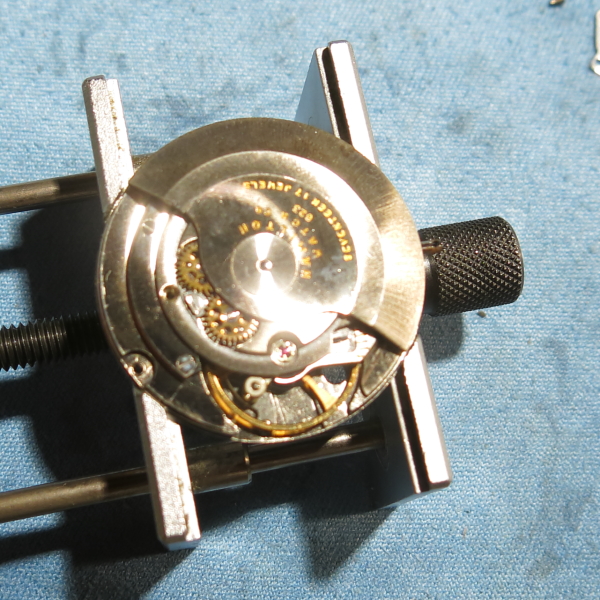 One difference between the 689 and the 623 is the 623 has a screw that holds the carrier to the oscillating weight with a very large head than on the 689, et al.  All of the silver portion in the center of the assembly is the screw head. 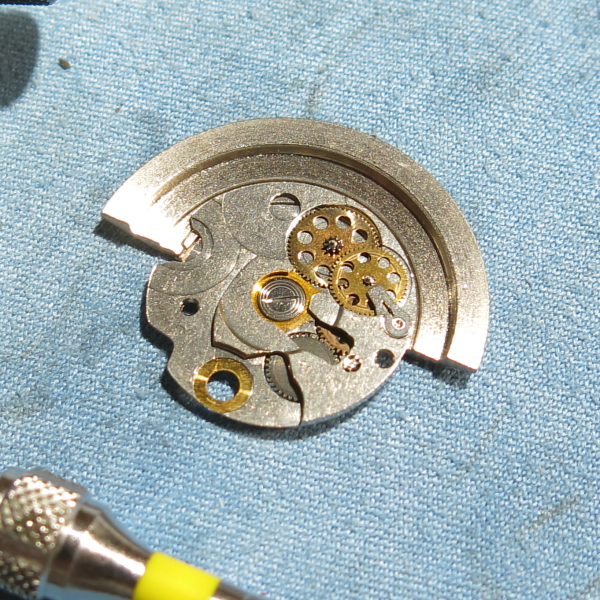 With the rotor out of the way you get a good look at the corse-toothed crown wheel and the traditional toothed golden colored ratchet wheel.  The latter has finer teeth and engages one of the winding wheels from the rotor assembly.  Check out the size of the glucyur balance wheel.  Is it just me or is that thing huge? (relatively speaking) 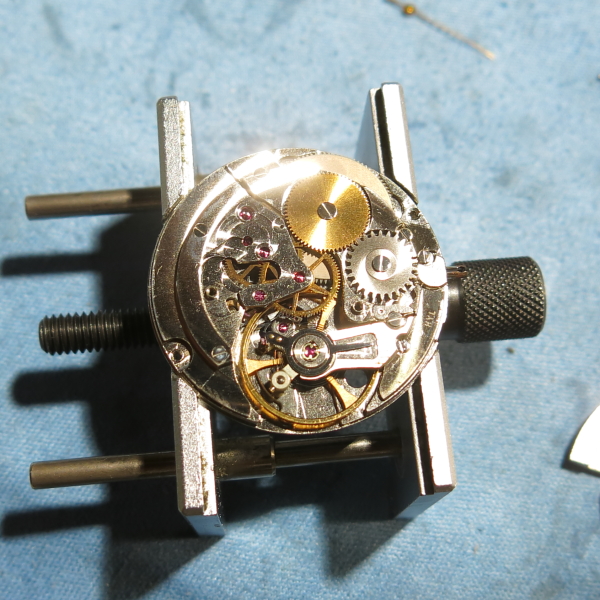 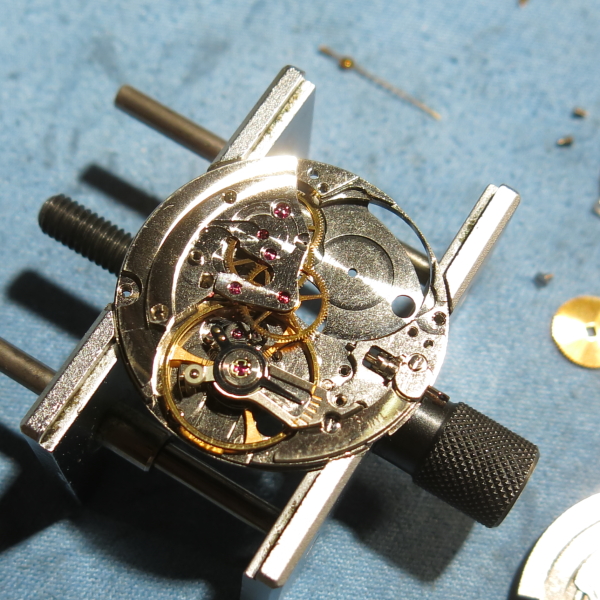 Two screws hold the train bridge on so that comes off next and provides access to the four train wheels.  Notice the "center wheel" is actually off to the side and, ironically, is the furthest wheel from the center.  This is why the 3rd wheel actually drives the cannon pinion.  The 4th wheel does go through the center though - and it drives the second hand.

Next off is the balance and the pallet fork below it. 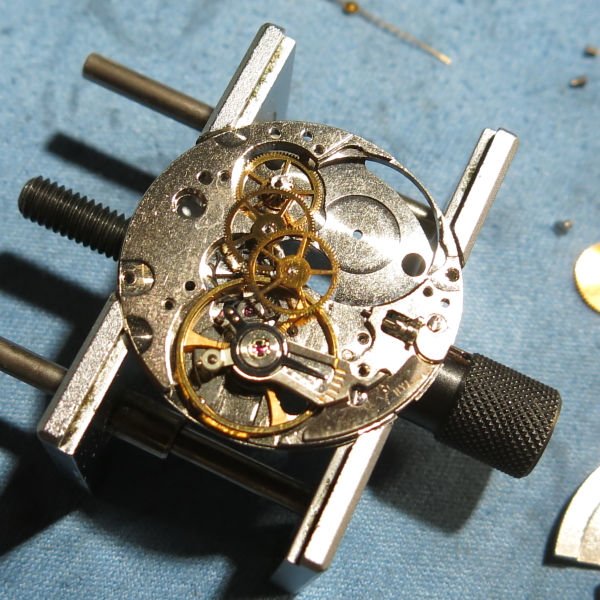 Typically the ebauche calibre is stamped on the main plate under the balance.  In the shot below, all I see is H and Cal 73.  So this is a Hamilton calibre 73... for what that's worth.  There may be a 21 jewel version of the 623 that uses the same main plate - like the Hamilton 64 and the 694A. 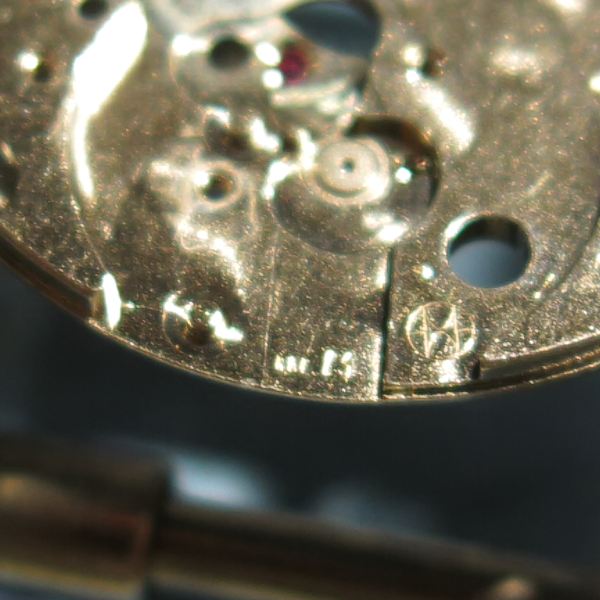 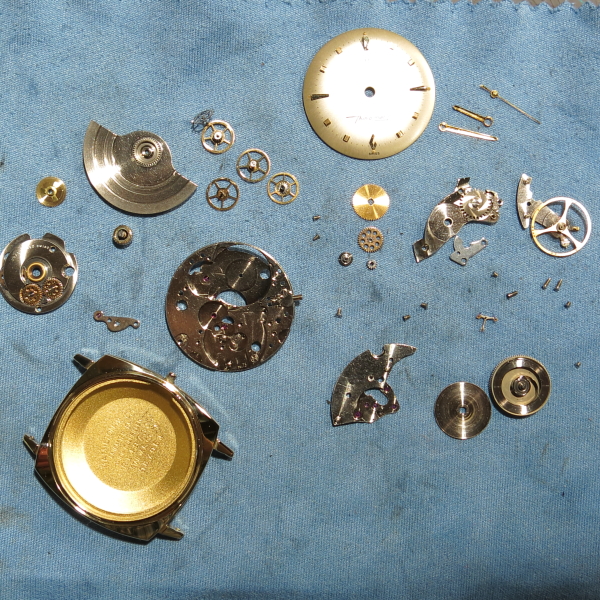 The four train wheels go in first, with oil in all the jewels.  The the train bridge goes on top and I carefully tweak each wheel until the bridge falls into place and the four wheels spin with no resistance. 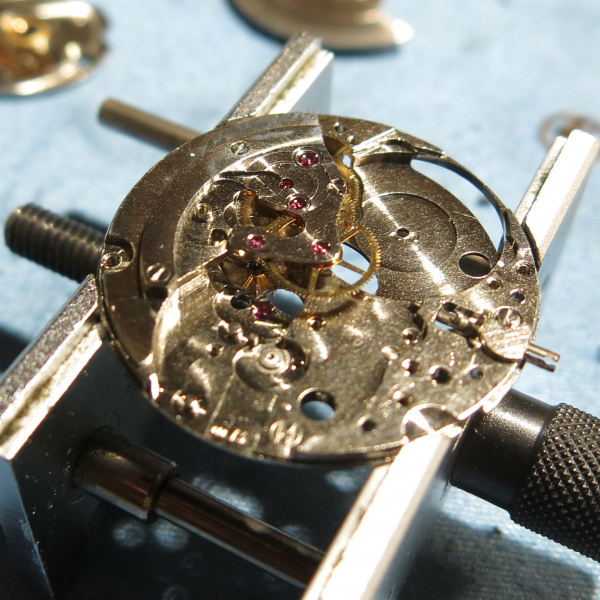 With the train bridge installed, the next part on is the pallet fork.  Each jewel and pallet stones get a tiny amount of oil and the pallet bridge goes into place. 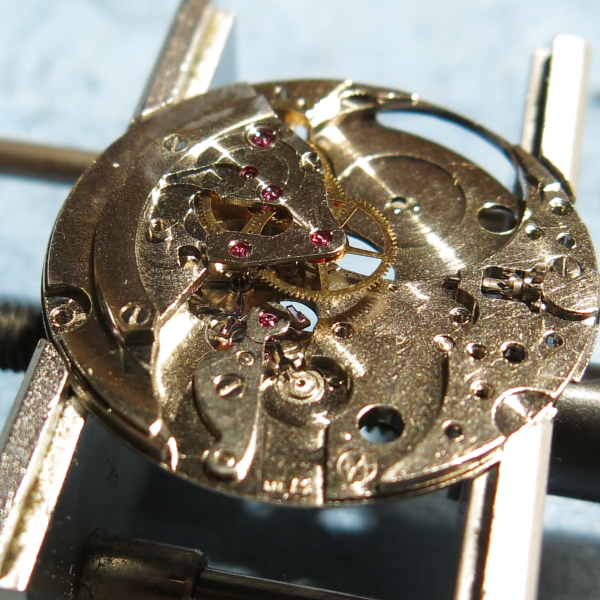 Now I can install the mainspring barrel and put the barrel bridge back on. 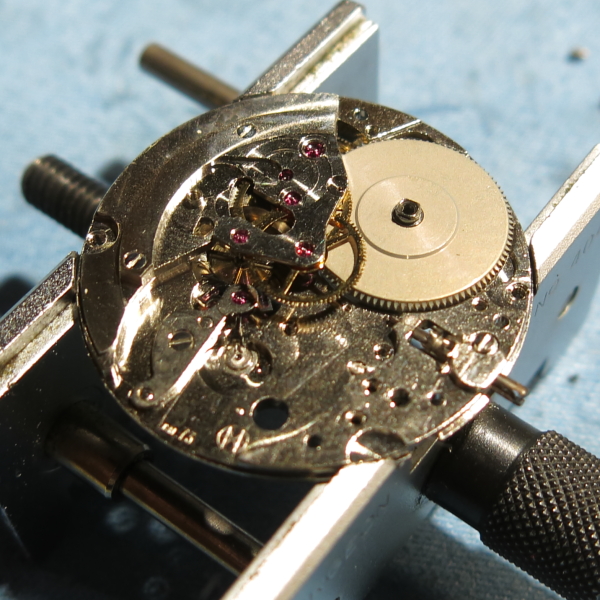 With a few turns to the mainspring, the watch is energized and I can put the balance back on.  If everything is lined up correctly, the watch will start running and I can secure the balance cock. 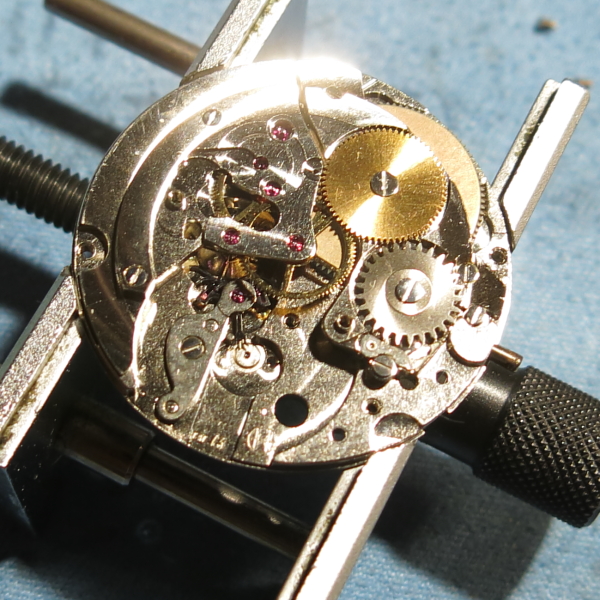 There - so far so good.  It's off to the timer to find out how it's performing. 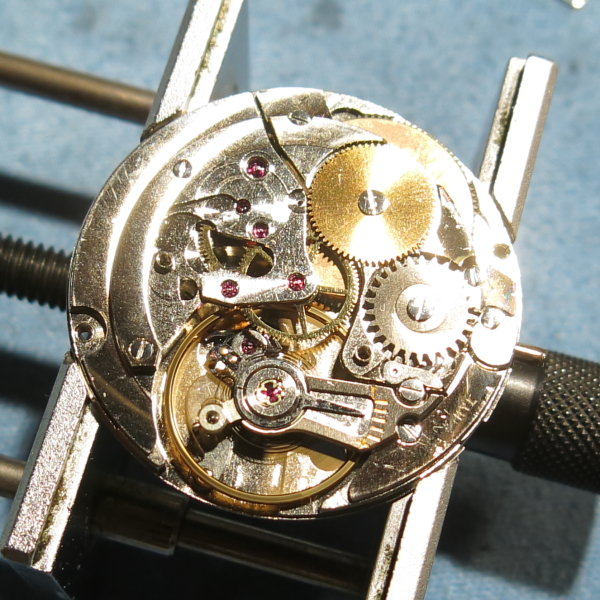 Well... that's not so good.  The two lines are far apart and a little bumpy.  I'll reclean the hairspring and run it past the demagnetizer. 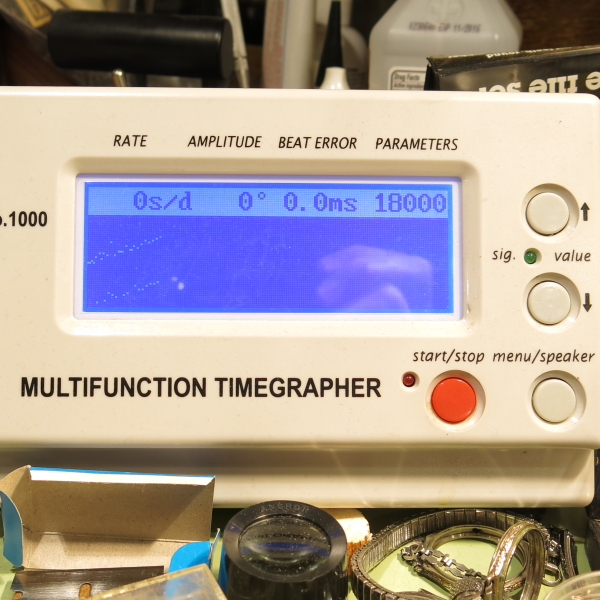 Getting warmer but still looking a little bumpy.  Once more into the cleaner. 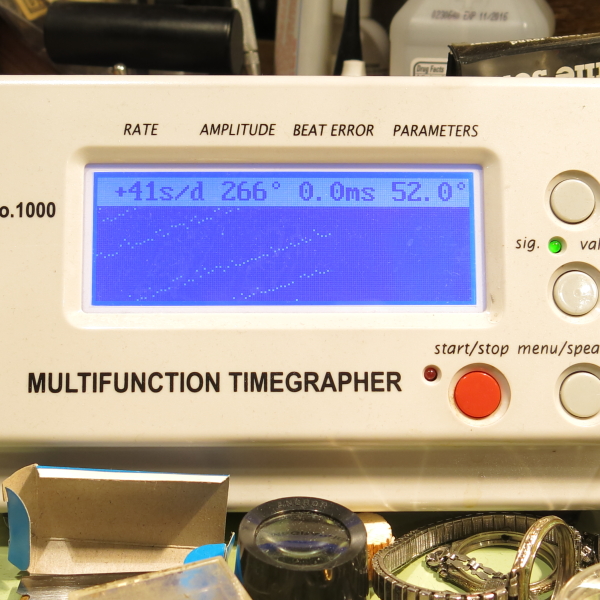 There, much better.  The amplitude of 233 is fine.  I haven't wound the watch up very much yet. 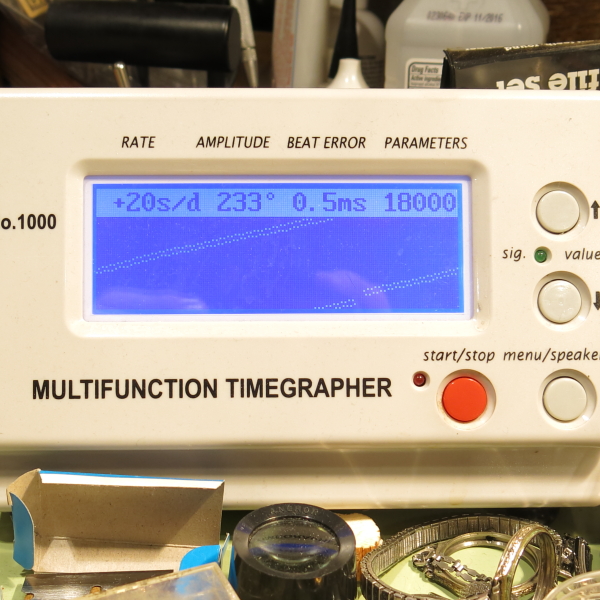 Now I can put the crown, minute wheel and setting wheel back on... each gets a dollop of oil.  Then I'll flip the watch over and put the oscillating weight back on. 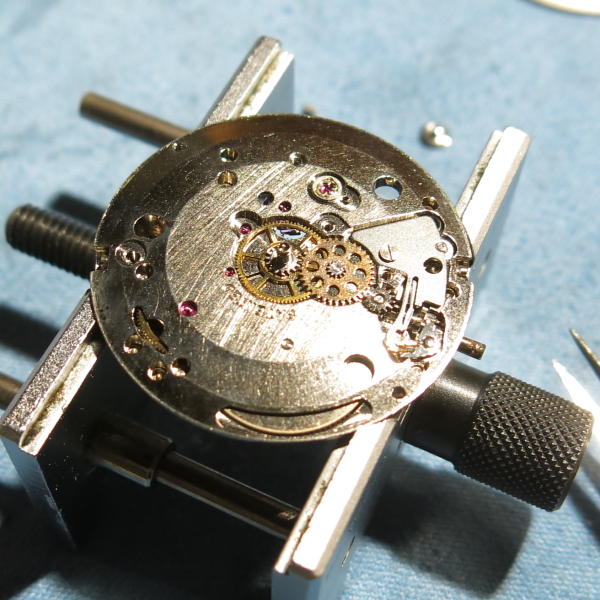 The dial and hands go back on next.  I need to put the hands on with the assembly in the case so I can use the crown to set the hour hand to midnight and then put the minute hand on top. 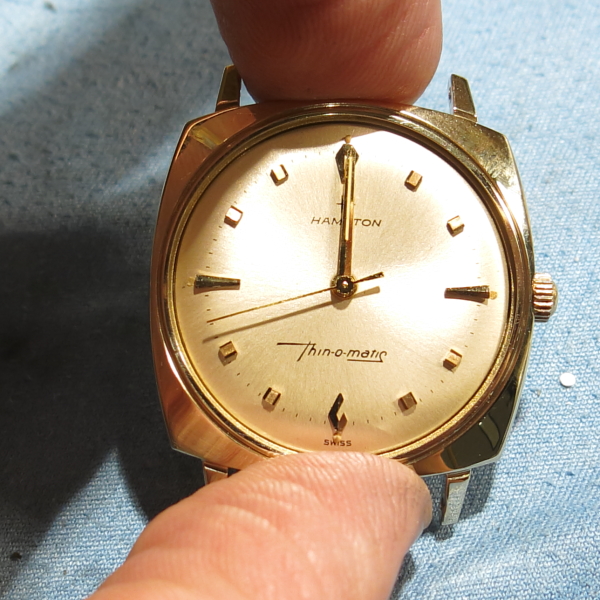 The last thing to go on is a fresh PHD high dome crystal in 28.1mm. 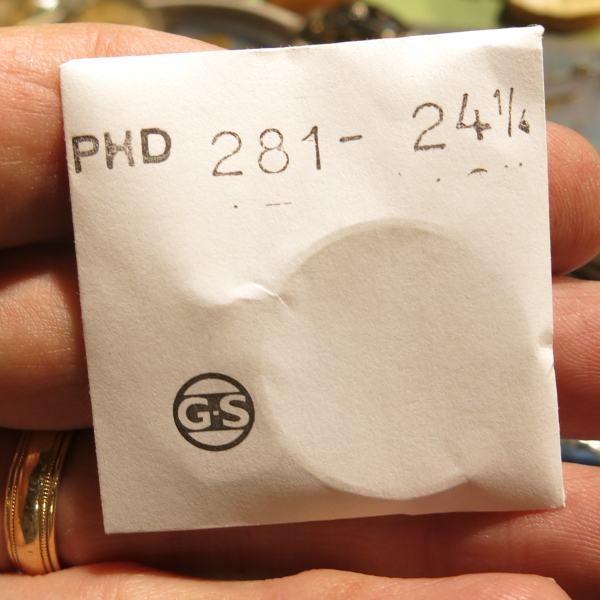 With a very nice genuine alligator strap, this T-412 is ready for some more wrist time.  A new crystal and gentle buffing of the case has returned this watch to showroom condition.  This is a very nice T-412 for sure. 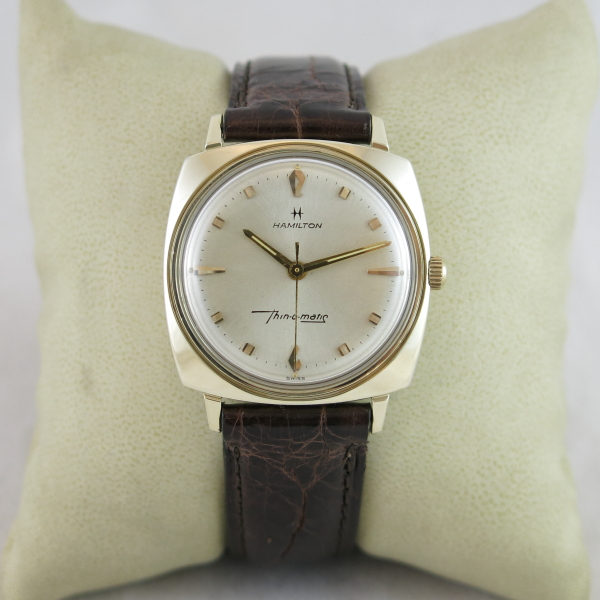