Some people think round watches are "boring".  Maybe they think there is only so much you can do to make a round watch unique.  Although I would tend to agree that a lot of round watches look similar, there are quite a few models that are unlike any other.

For example, check out the 1958 Clearview.  It was made for three years but you will be hard pressed to find one in the wild.  It is not a common model. 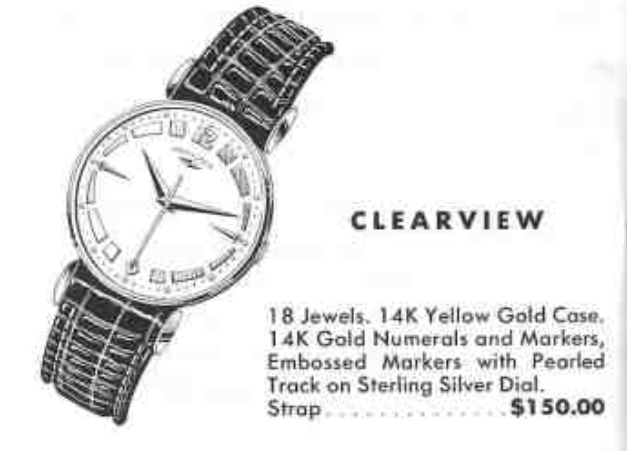 The Clearview came in a solid 14K yellow gold case.  It has long lugs that remind me a little of bunny ears.  What makes the model really pop is the sterling silver dial with embossed golden colored markers and solid 14K gold markers at 3 and 9 and numerals at 12 and 6.

Tucked inside the case is an 8/0 sized 735 movement that was made in Lancaster PA. 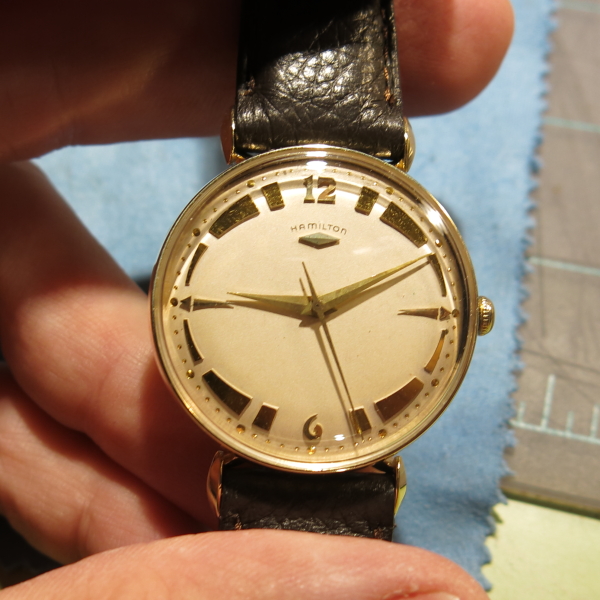 Looking at the narrowness of the bezel (the crystal goes all the way to the edge) and then at the case back, it appears like this watch may open through the crystal. 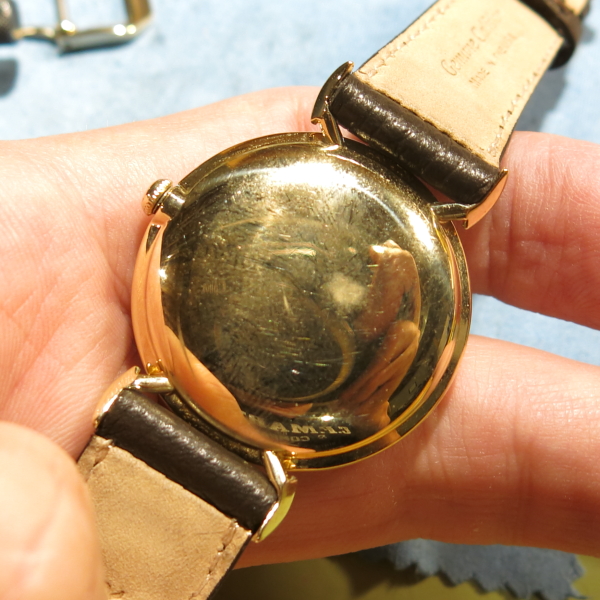 However, when you look closely at the edge you can see a seam, so this is a two-piece case and the bezel pops off the back of the case. 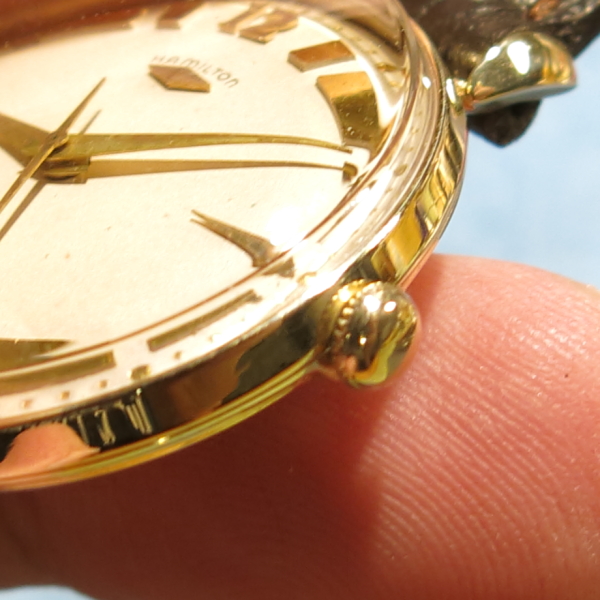 The dial goes almost to the edge of the case too - so this bezel is very thin.  Now the dial and movement can be lifted out the back. 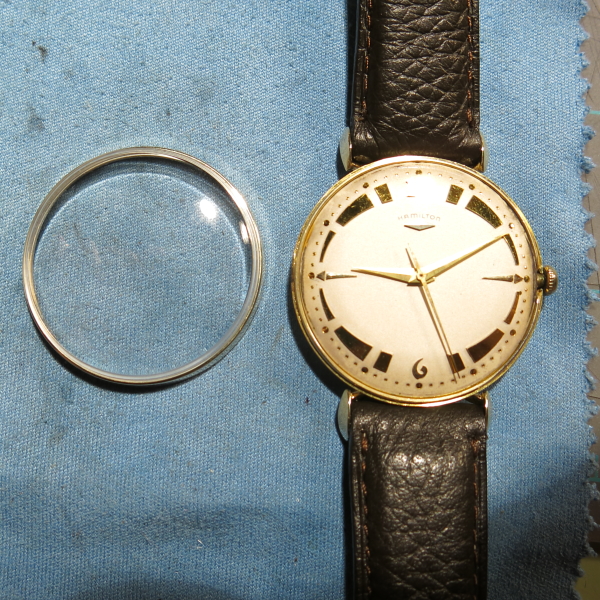 The 735 movement is not running for some reason.  It's a little dirty and nothing looks unusual so it could just be gummed up with old oil. 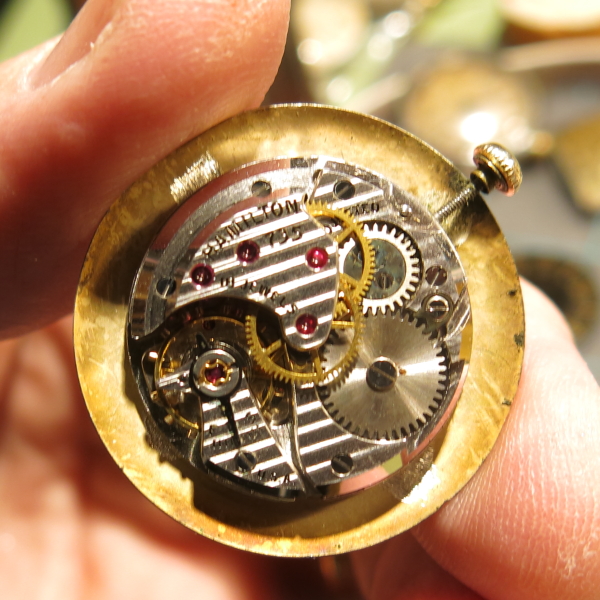 It's easy to spot a solid gold case because there is never any green verdigris like you'll find on a gold filled case. 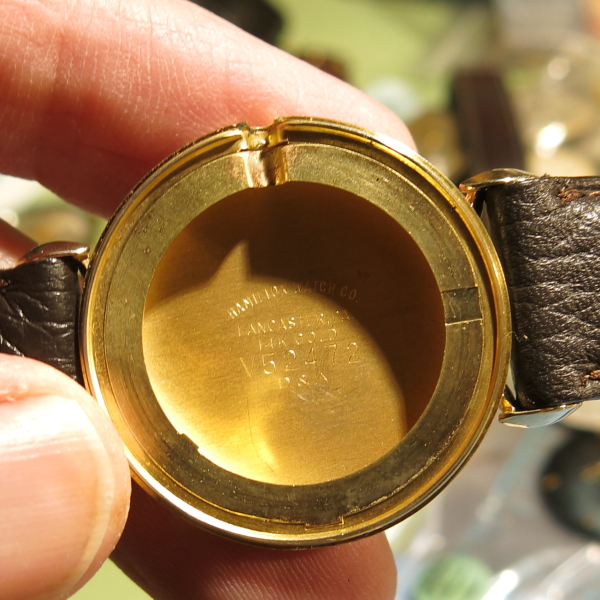 I pulled the hour wheel and cannon pinion and the watch didn't start running, so whatever the issue is with the movement, it's on the back side of the main plate.  You can tell in this shot that the crown is worn and is actually coming apart, so I'll replace that after the movement is back in good shape. 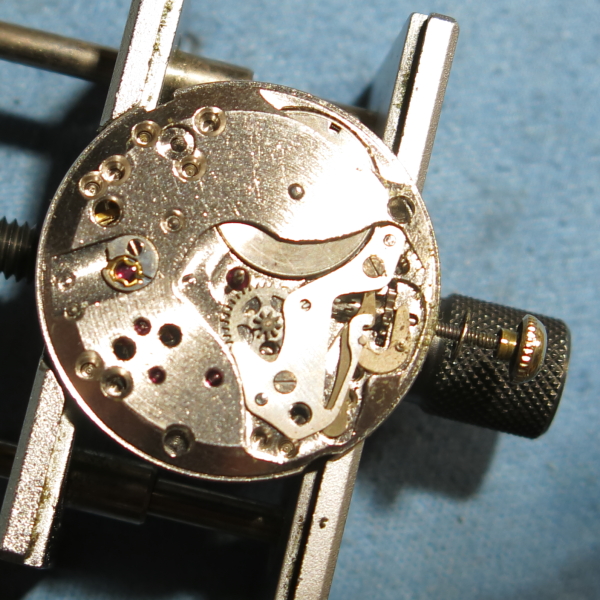 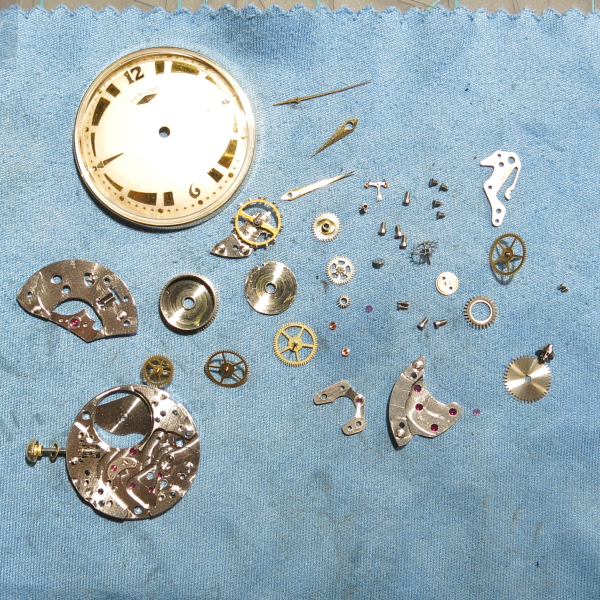 The white alloy mainspring that was in the watch can be reused.  I just cleaned it and rewound it with my mainspring winder so I can reinstall it in the barrel. 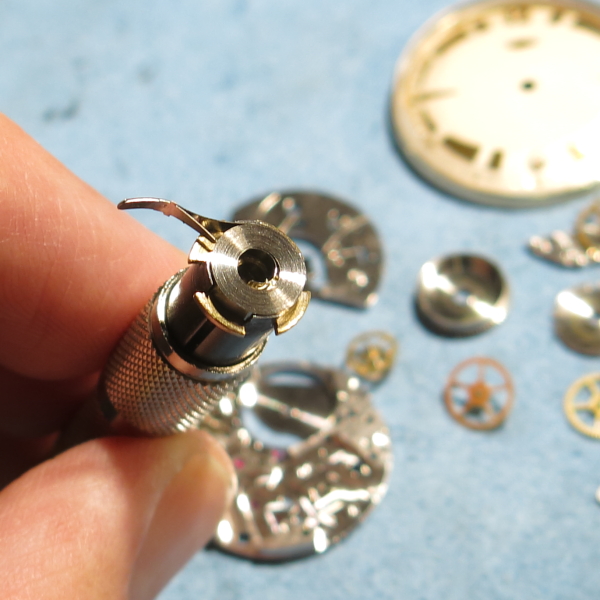 The 8/0 sized 748 movement and the 735 that replaced it are tricky to put back together because you have to get four wheels to come together perfectly before the train bridge will fall back in place.  It's very easy to break a pivot off the escape wheel if any force is applied.

I got this movement back together and then realized I forgot to put the winding wheel back on.  Normally that part goes on later but it has to go on now because the third wheel blocks access to it. 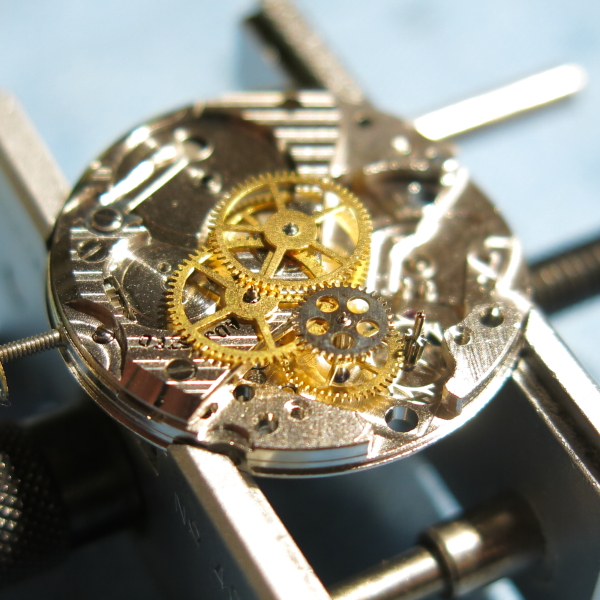 In the shot you can see the winding wheel (on the left) is in place .  Notice that one of the two screws that hold it down is visible.  The other screw is blocked by the third wheel.  Now the reassembly can proceed. 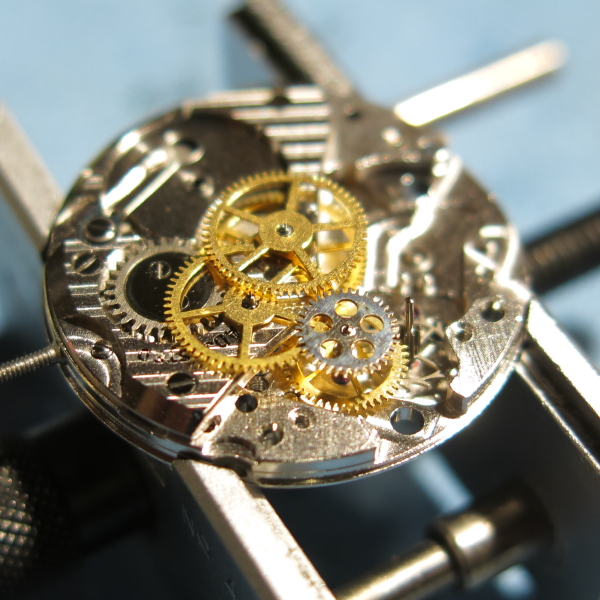 Putting the pallet fork on last makes lining up the four wheels easier and it also ensures the escape wheel doesn't accidentally damage the pallet jewels. 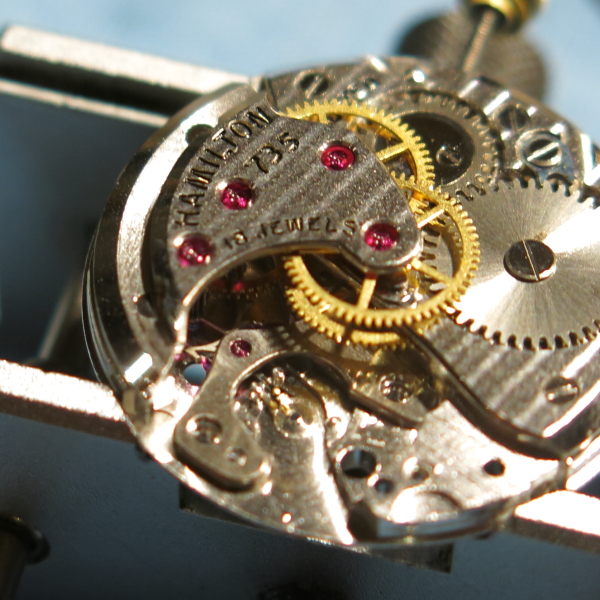 The next step is to install the balance.  In order to do that I need to put the balance jewels back under their shock springs.  These incabloc springs are like tiny tuning forks and you squeeze the open end to allow the spring to open and swing out. 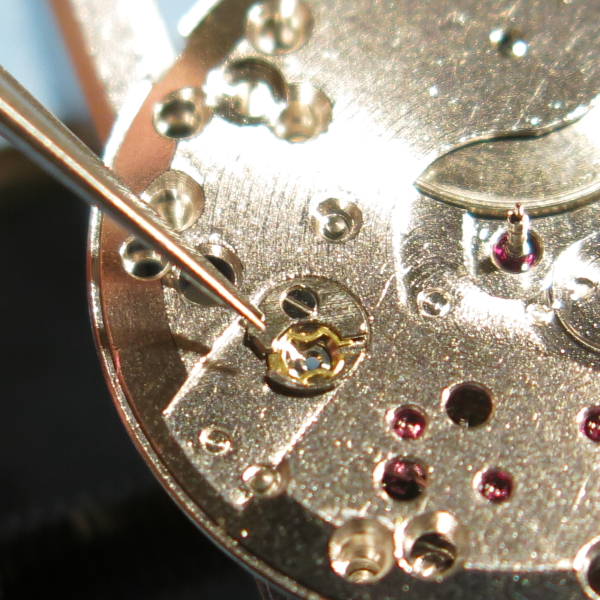 The balance jewel and cap jewel are inserted and then the incabloc spring goes back in place to hold it all in place. 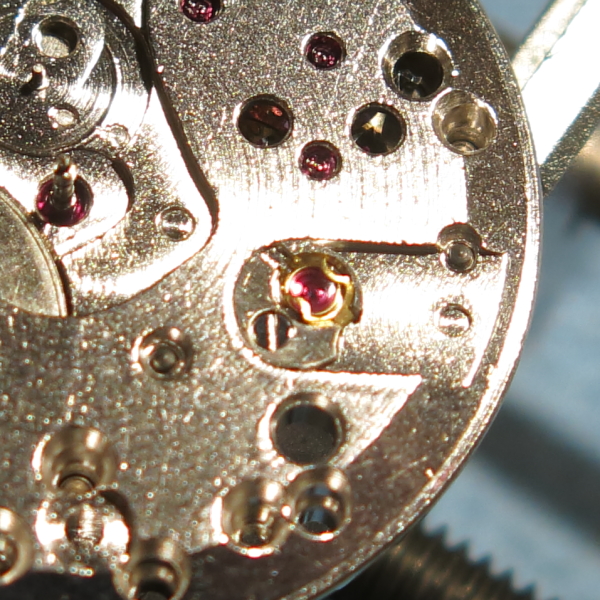 With a little tension added to the mainspring, once the balance goes back into place the watch should start running.  The balance is swinging away nicely and the next step is to add the other balance jewel assembly in the balance cock. 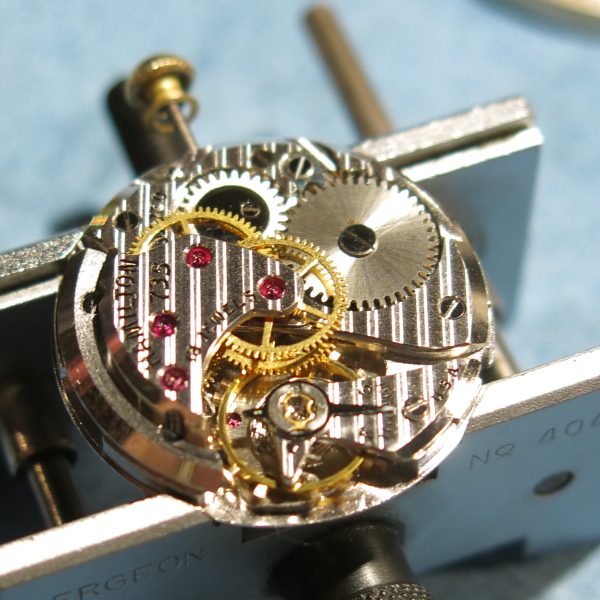 Although the watch is ticking, the performance looks like crap on the timer.  So I'll run it through the demagnetizer and reclean the hairspring. 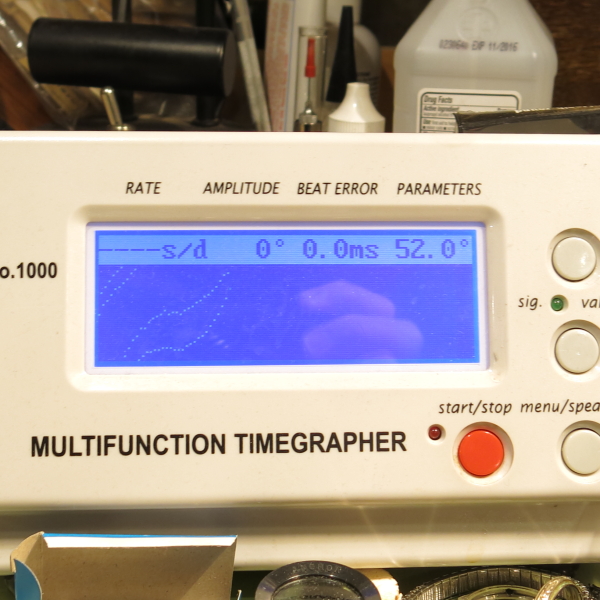 It took a little tweaking but the watch is now running nicely, just a little slow but that's easily adjusted. 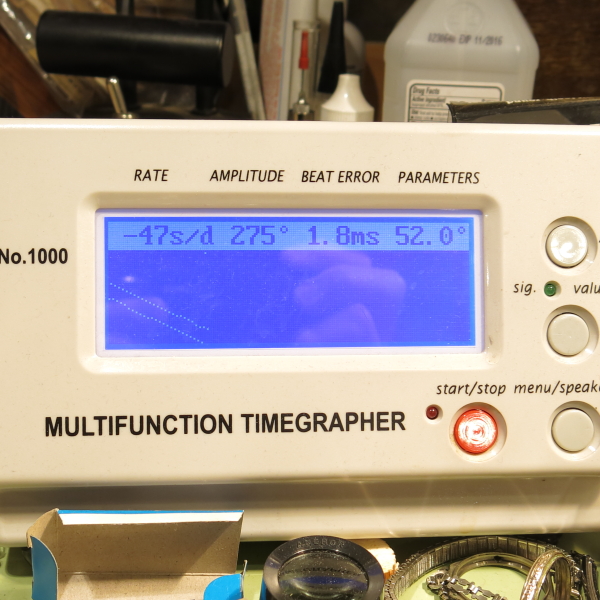 There... nothing wrong with this movement's performance now.  The beat error of 1.4ms is well within my usual specs of acceptable.  Adjusting it is a pain and the benefit doesn't out weigh the potential risk of screwing up the hairspring. 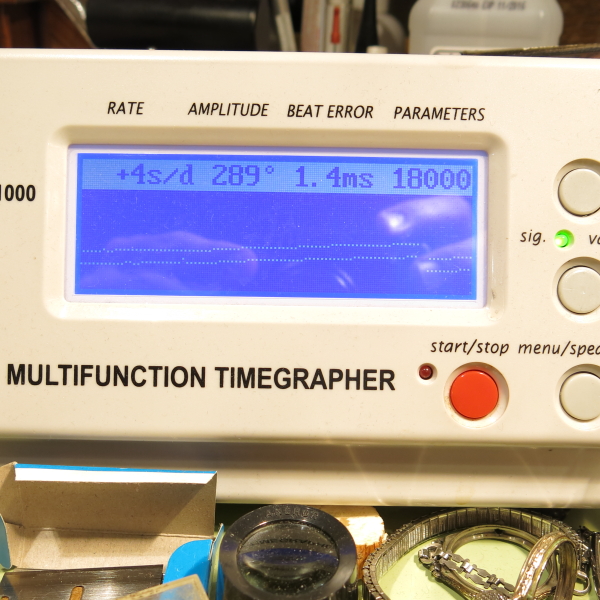 The finished watch looks as good as it did when I started - but now it's running as nice as it looks.  Actually it looks even better because the new crown is much better than before.  This is a really cool looking watch and I bet even people who think round watches are boring wouldn't mind giving this watch a little wrist time. 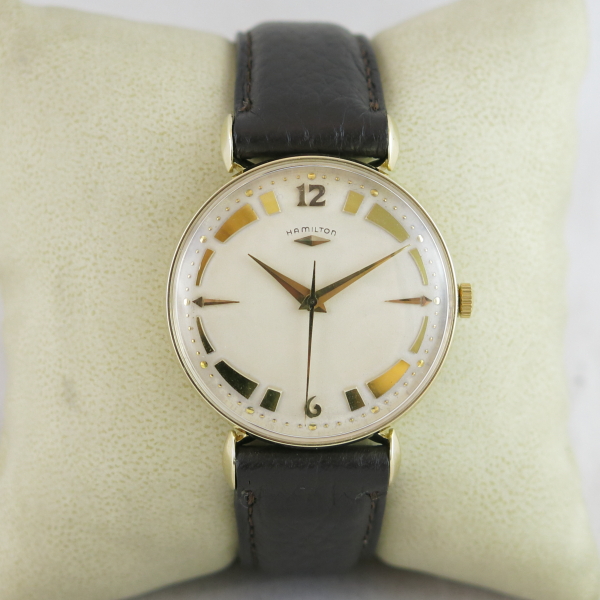 SaveSave
Posted by HandyDan at 1:04 PM