Watches that were curved to fit the wrist were very popular in the late 1930's.  In addition to having a chicken in every pot, a lot of American families aspired to have a family car... probably a lot of ask for during the Great Depression.  But if you were going to have a car, then having a "driver's watch" would be a logical next step.  Why not have one that fits comfortably on your wrist?

In order to have such a contoured shape, the dial had to have an equivalent contour.  There were some manufactures who endeavored to make curved movements too... but not Hamilton.  Hamilton introduced the "spherical dial" that was thickest in the center and sloped down to the sides.  In order to accommodate the thicker dial, the canon pinion and hour wheel had to be longer - and that's a feature that was used for many Hamilton models for as long as production in the US continued.

One of the first models to use a spherical dial was the Allison.  It was introduced in 1938 and produced through 1940.  The asterisk after the model name indicated that a patent had been applied for.

The Allison came in a solid 14K yellow gold case.  The sterling silver dial also featured solid 18K numerals.  One of the details that made the Allison unique is it had a sunken round second hand register.  Typically the seconds register is shaped like the bezel opening and would have been rectangular.

Because the Allison came in a solid gold case, it also featured the 19 jewel 982 movement.  The 17 jewel 980 was used in the gold filled models.

I recently landed an Allison project watch.  You don't tend to see this model very often so I was happy to get it at a decent price, probably because it was showing a little wear to the dial. 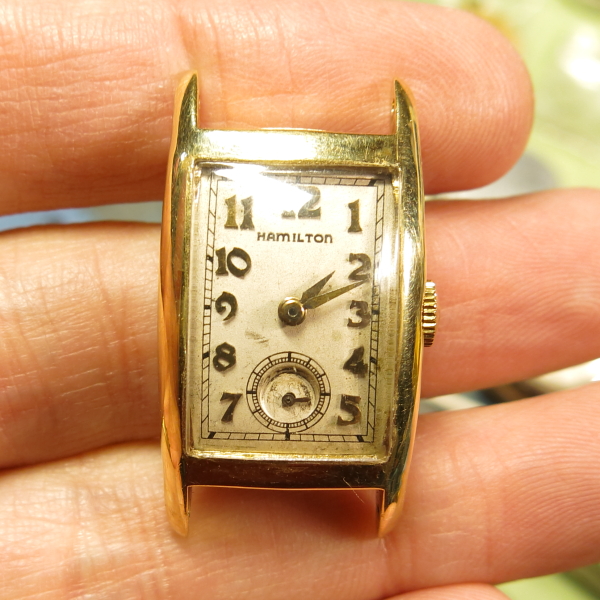 You can tell by the notch on the side between the 3 and the crown that the dial has already been refinished at some point.  So there's no reason not to get it refinished again so that it will look nicer. 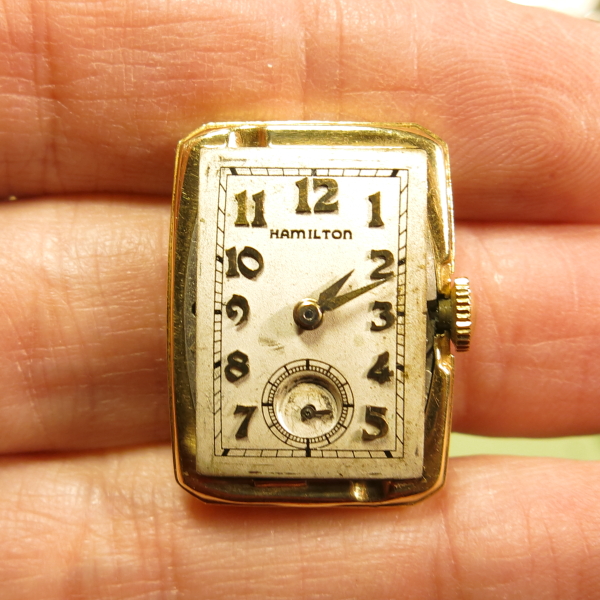 If the notch wasn't there, it's also possible to tell that a dial has been refinished by looking at the back.  The numbers scratched in would indicate this had been refinished at least once. 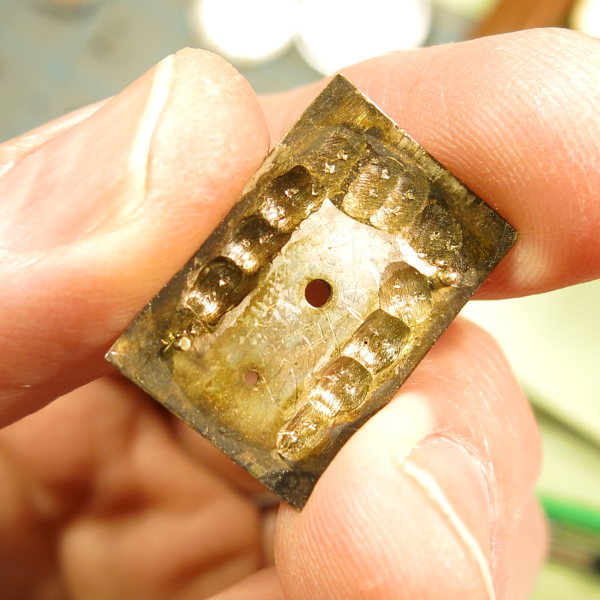 Based on the dull haze of the movement, it has been a LONG time since this watch has been cleaned and oiled. 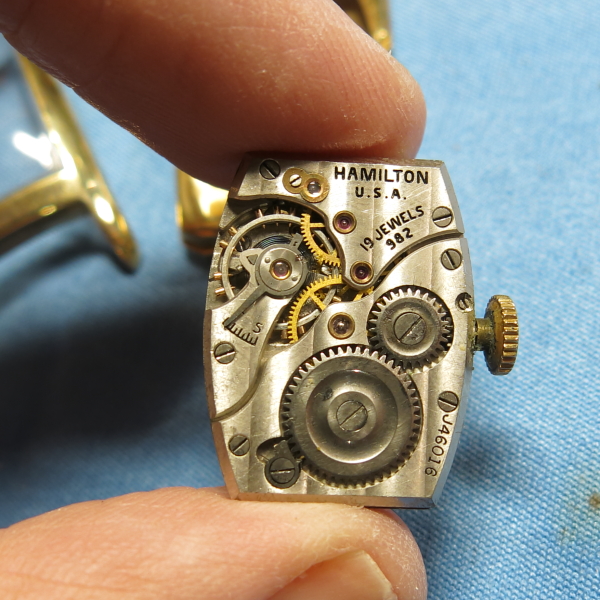 This is a 2nd generation 982.  You'll find later 982's have a balance cap jewel that is held on with two screws.  The 1st generation had a split set bridge and yoke.  The 2nd generation combined them into a single piece, as shown. 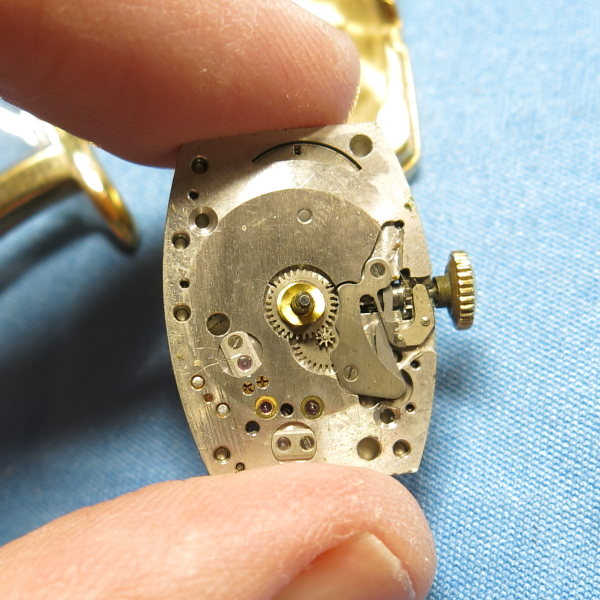 The mainspring inside the barrel is an older blue steel design.  It is most likely "set" and will need to be replaced.  If I left this spring installed the watch would run fine but it would only run about 24 hours before it ran out of steam. 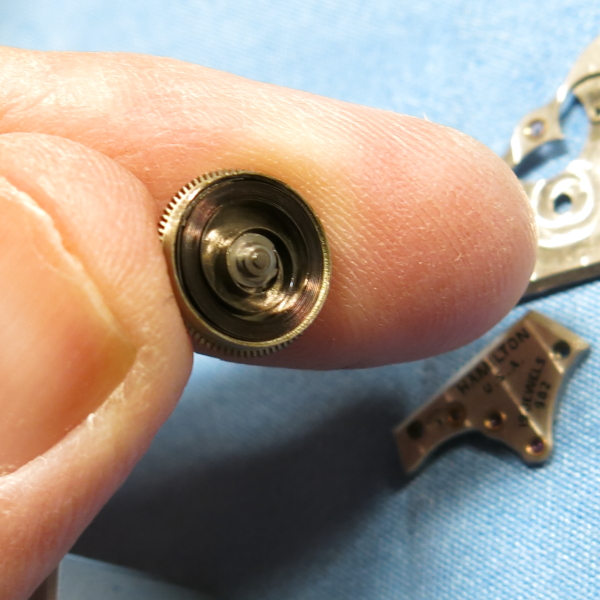 Sure enough, the spring has set.  Replacing these springs is a regular course of business but once I installed a white alloy spring it won't need replacement as frequently. 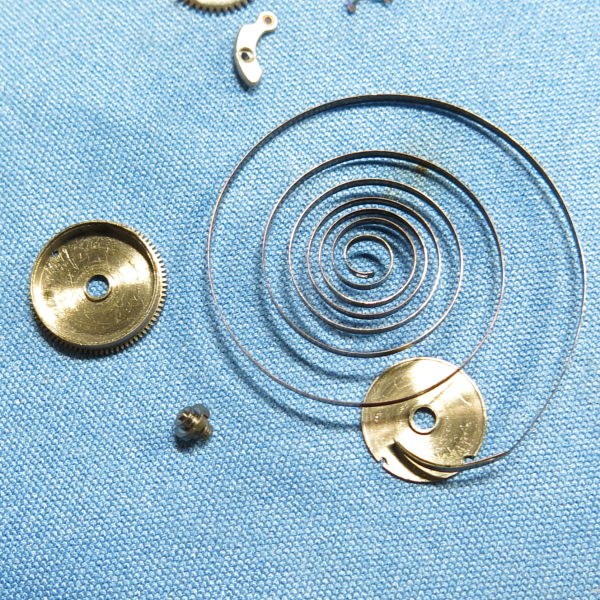 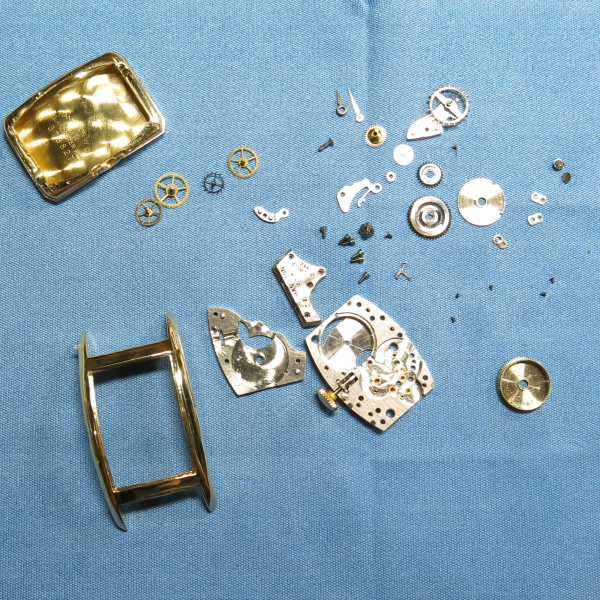 A new glass crystal will be a nice improvement over the plastic crystal that was installed before. 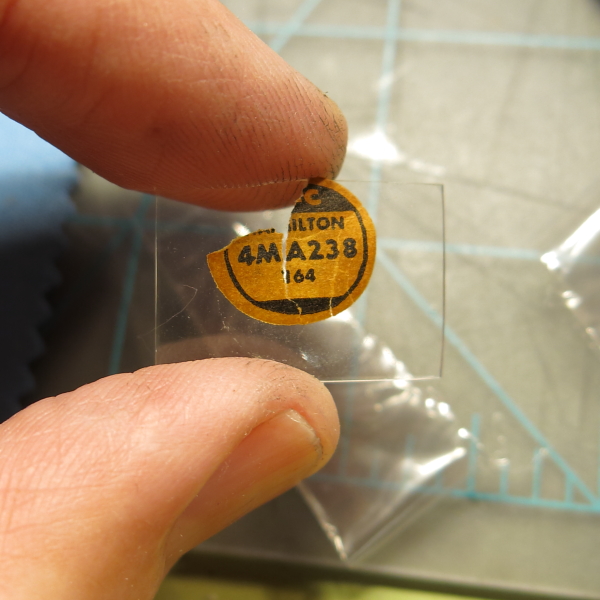 Most of the time a new crystal needs to be shaped a little to fit the case opening.  600 grit sand paper, a little water, and a lot of patience will get the job done. 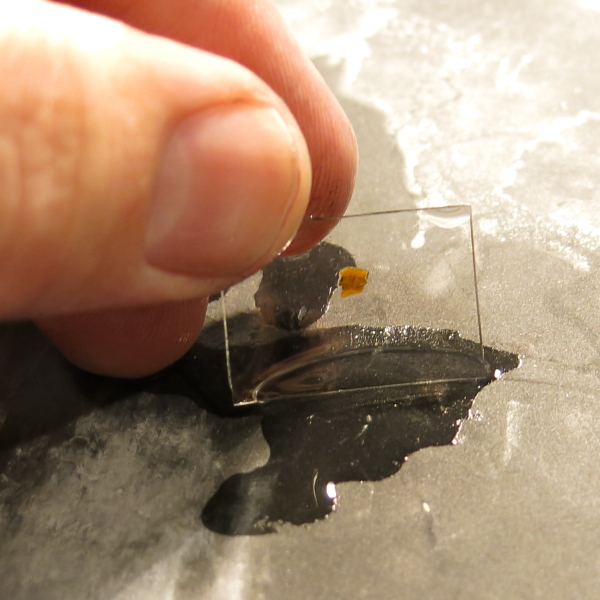 Once the crystal fits the opening, UV glue can be applied and the assembly can sit in the sunshine or under a UV lamp until the glue cures. 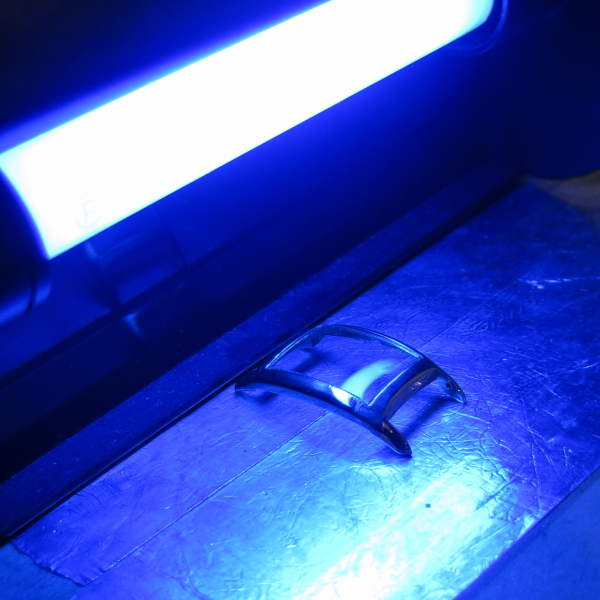 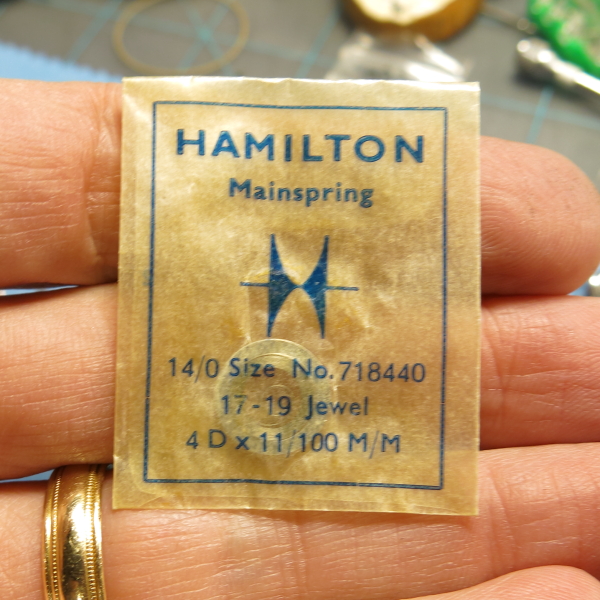 The 14/0 sized grades, 980, 982 and 982M, are challenging to reassemble.  You need to put all the wheels on at the same time.  The three-wheeled train bridge is the trickiest part but as long as the pivots are lined up it will drop right into place.  It can be a frustrating task sometimes. 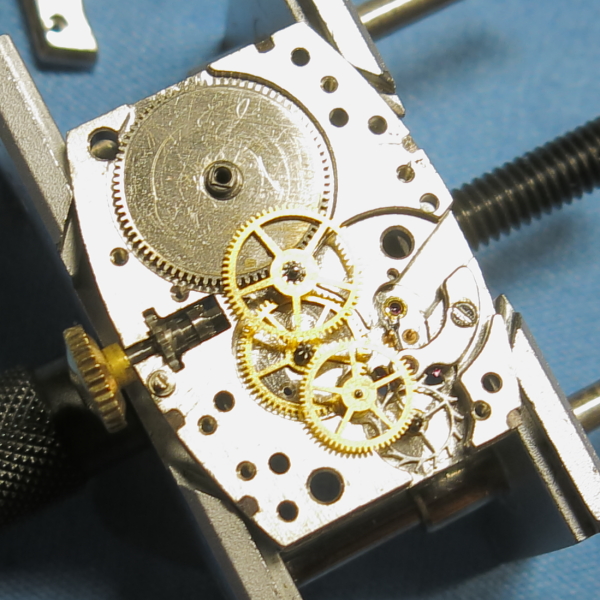 The balance has been reinstalled and the watch is now ticking away with good motion.  I've got enough experience now to be able to tell by eye if there's an obvious problem but I still need a timer to tell me if everything is okay.  Notice the regulator index is set to Fast. 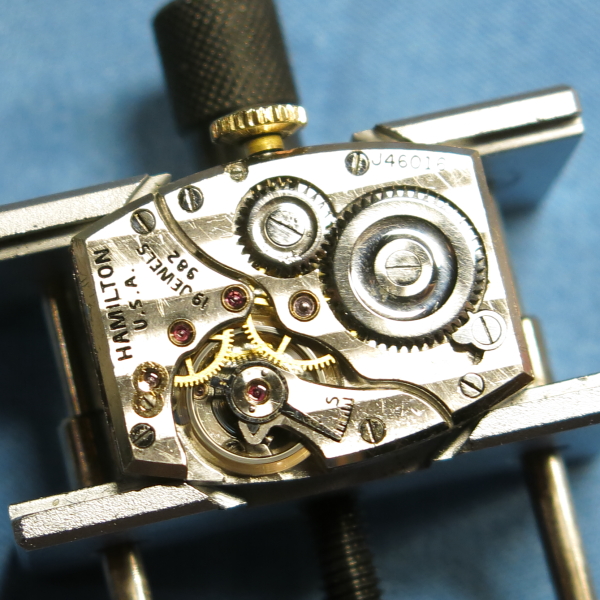 The watch is definitely running fast.  Setting it to full slow it still ran a little fast.  So this balance may need a little weight added to it to slow it down. 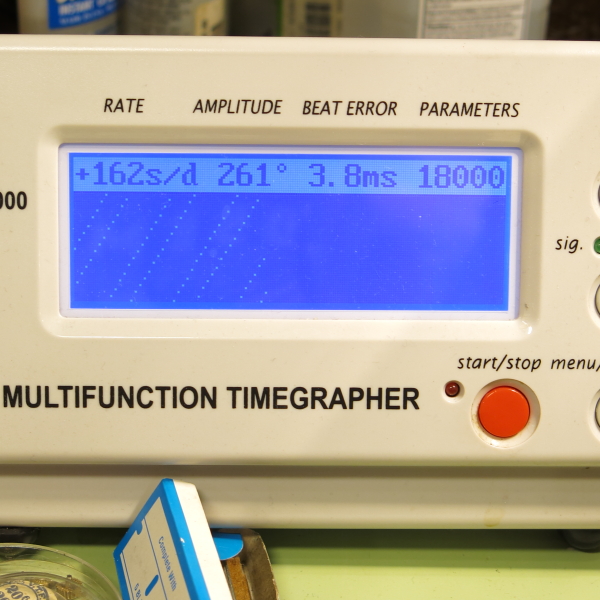 The tiniest washers you've ever seen are used to add weight to the wheel and slow it down ever-so-slightly. 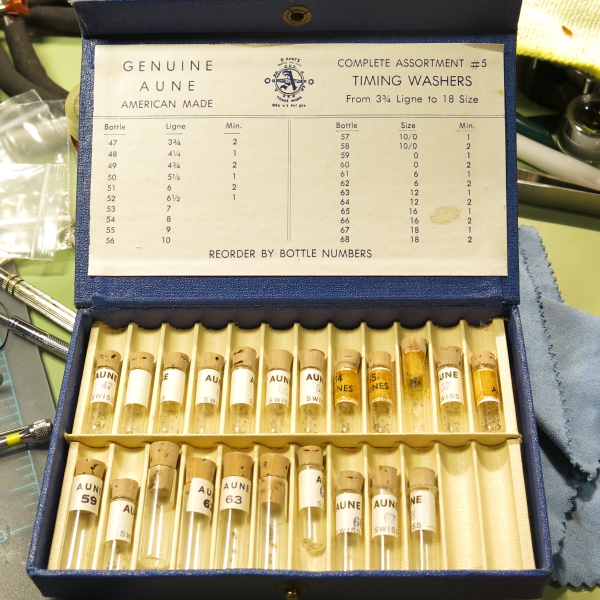 With the regulator set toward the center, I have been able to slow the watch but the beat error is a little too high for my tastes.  I'm really tempted to leave it as is though, as every attempt at working on the balance is rolling the dice on messing up the hairspring or balance staff pivots. 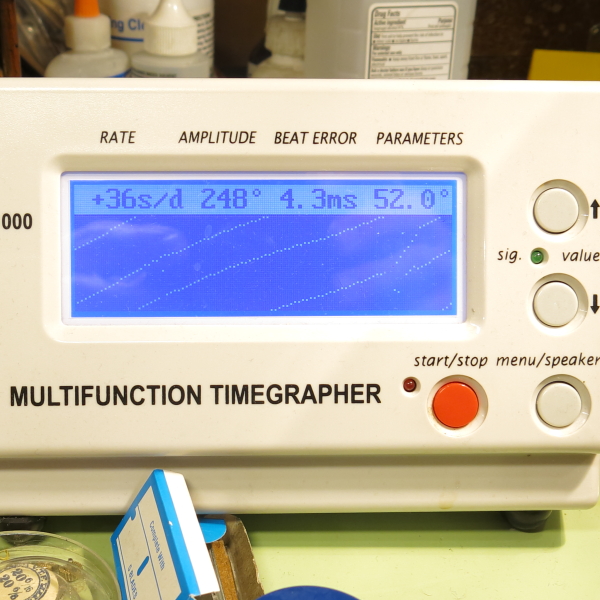 There... my conscience got the best of me and I couldn't let the beat error slide.  It took a couple of attempts but I think I nailed it.  I'll leave it running a little fast while it settles in. 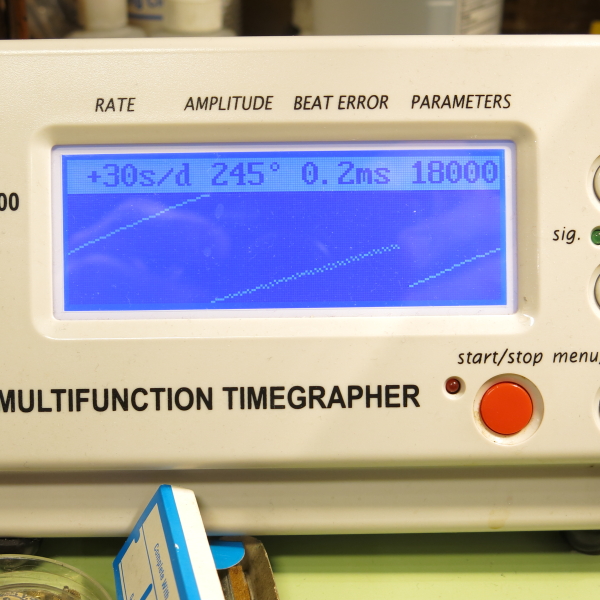 I got the dial refinished while I attended to some other projects.  So I get to show you the finished project.  In addition to the newly redone dial, new glass crystal and new black ostrich leg strap, I also replaced the hour hand with a nicer one.  This Allison looks and runs fantastic now. 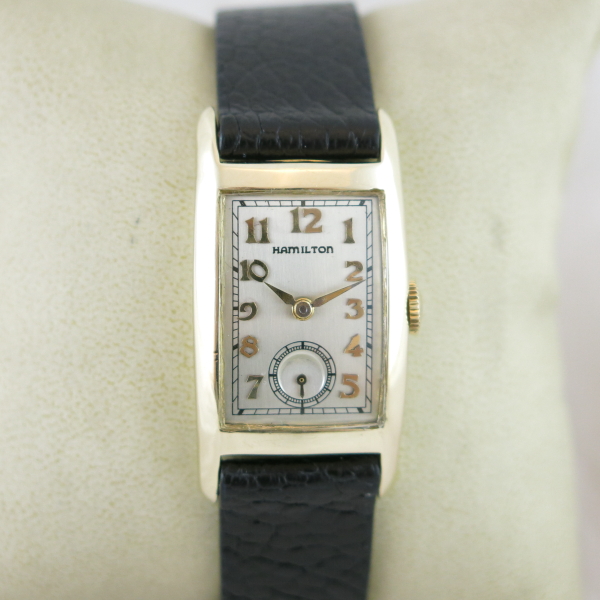