Someday I will get around to figuring out which of the oldest Hamilton wrist watches I haven't laid hands on yet.  I feel like I've made a very sizable dent in the 1930's and 1940's models but there are still a few I have yet to find.  It's always fun to locate a new model from this era. 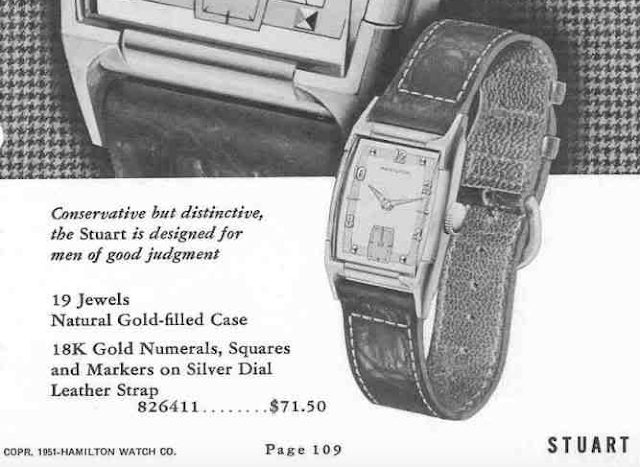 The dial on the Stuart is a two tone white / butler finish with solid 18K gold numerals and markers.

As I mentioned above, I recently came upon a Stuart and I was pleasantly surprised to see that I hadn't already covered the model.  I think the majority of the models that I have left to find are automatics and Thinline models - but there are still quite a few missing models lurking about.

From the outside the watch looks very promising. 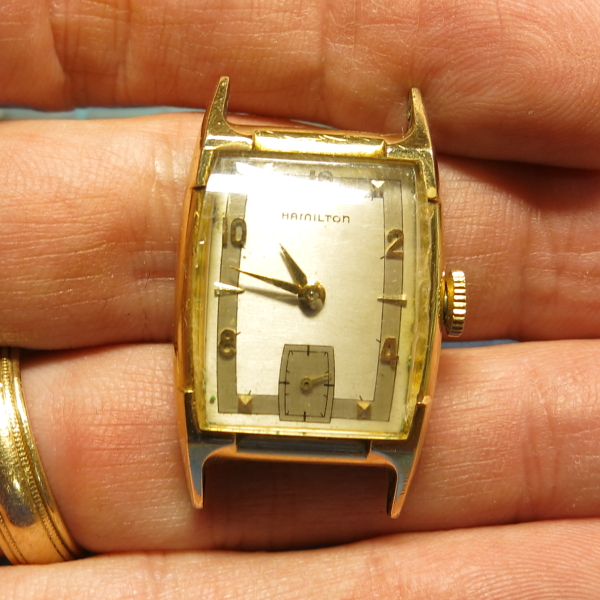 This type of arched crystal is called a cylinder.   Cylinders are great to have on gold filled cases as they can protect the bezel from wear caused by shirt sleeves.  This one is a bit chewed up looking - a testament to the beating a watch can take while on the wrist.  It's done it's job well though, the rest of the case looks good. 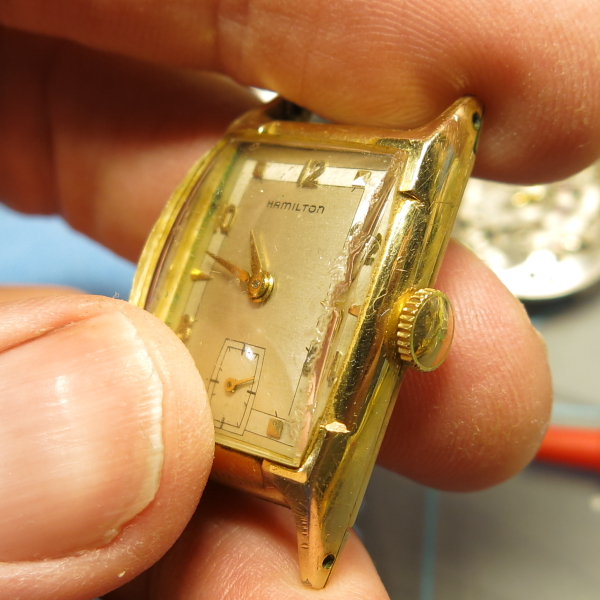 The case back has a couple of minor scratches and a little polishing will make them disappear. 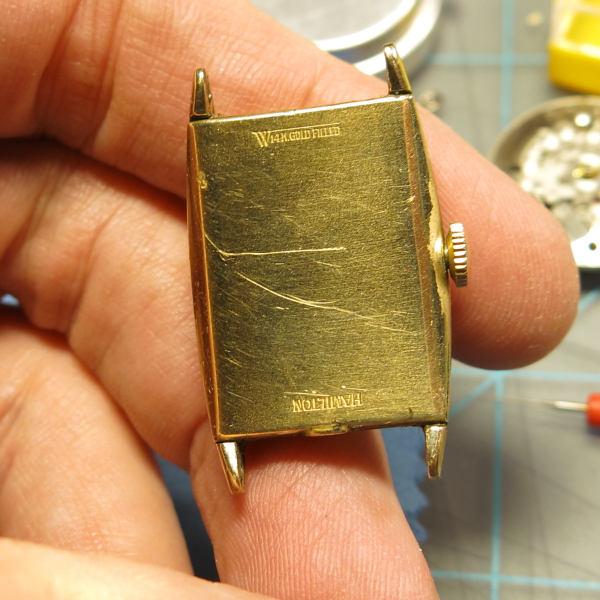 Without the crystal blocking the view, the dial looks very presentable.  There is some spotting around the perimeter but that's all blocked by the case.  This dial has all the signs that it's original and has not been refinished.  If it was refinished, it was done perfectly. 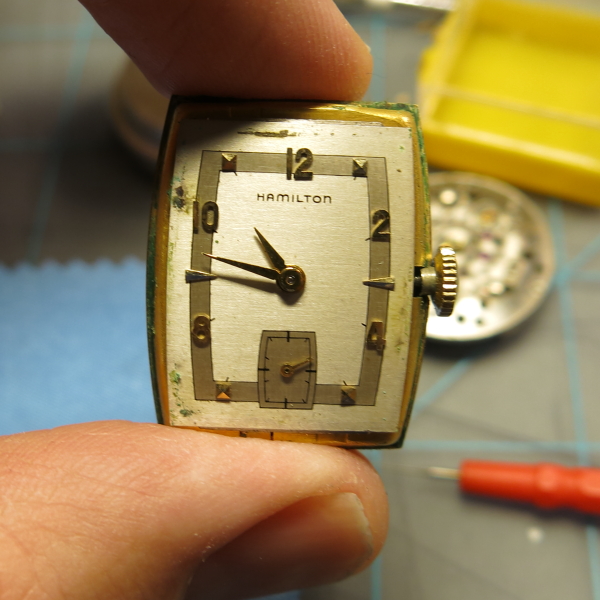 The movement looks very good.  In fact, it's surprising bright and shiny. 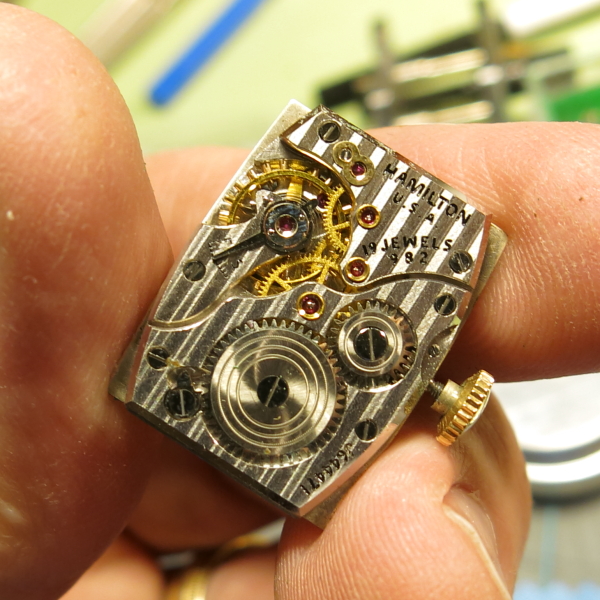 The case back makes it easy to identify the model.  I only see one watchmaker's mark inside.  I wonder if the code means it last saw a watchmaker in April 1983? 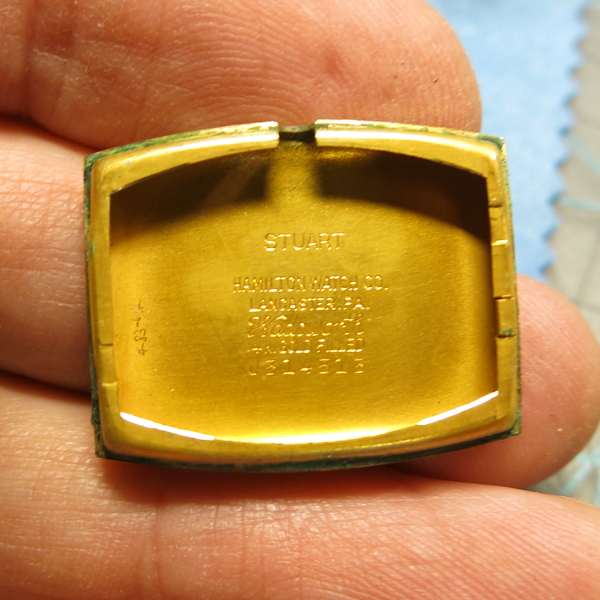 Opening up the barrel, I can see it has a blue mainspring inside.  I'd replace it anyway with a white alloy spring but you can't tell that it's broken in this view. 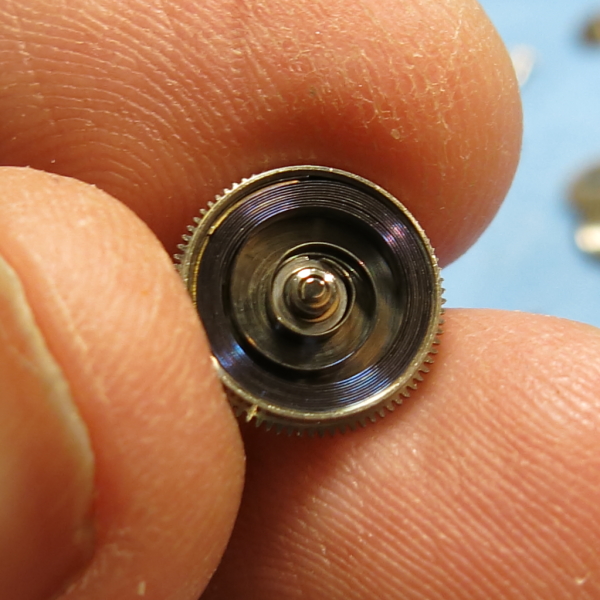 Now you can though.  You can also see that it's "set" and would need to be replaced even if it wasn't broken. 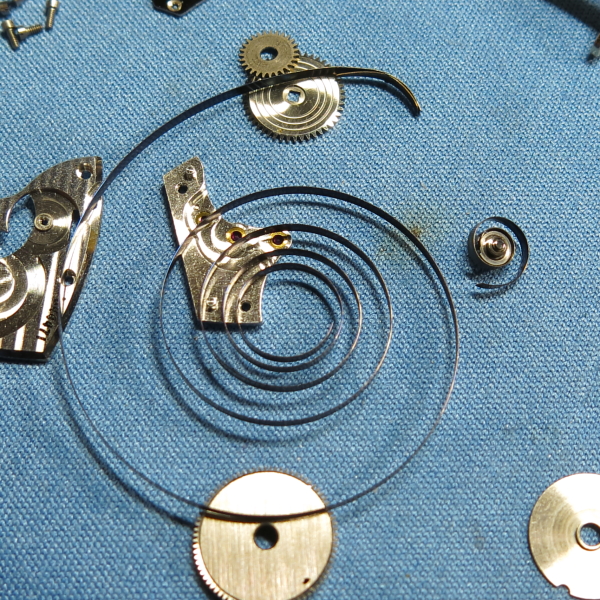 I'll get the new glass crystal ready for installation while the movement is in the cleaner. 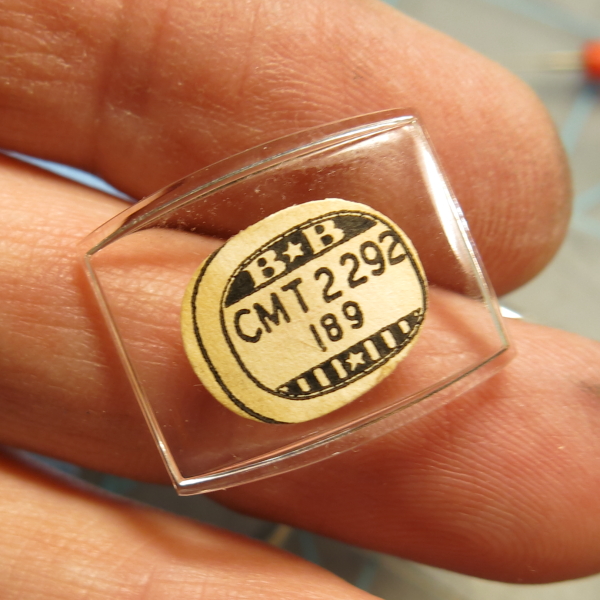 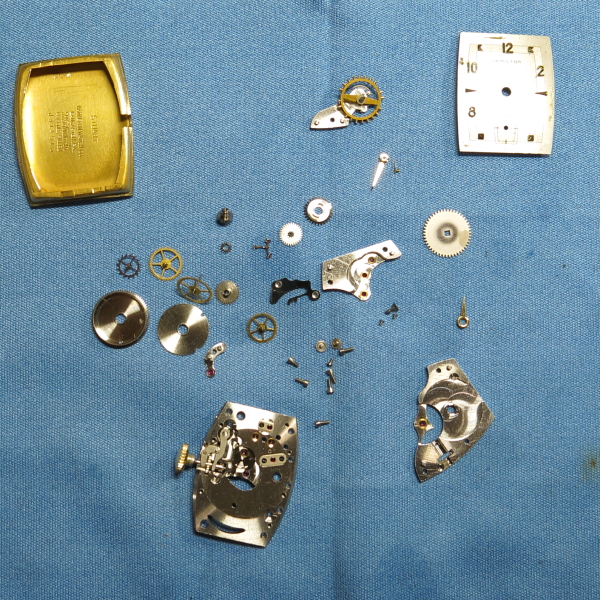 A new white alloy mainspring is ready to be installed.  You have to put it in correctly though... does the coil go clockwise or counter clockwise?  I can never remember (but I could lust look at the picture of the original mainspring installed in the barrel to find out).  I'll just remove it from it's holder and rewind it for insertion - that way I know it's correct. 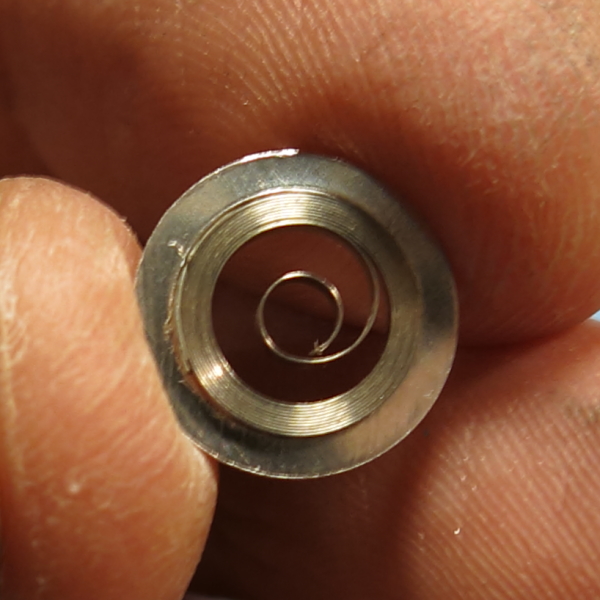 The reassembled movement is ticking away with good motion.  The 14/0 movements can be finicky and it's easy to accidentally drop the balance cock off the side of the movement - thus ruining the hairspring.  So I'm always glad to see it come back to life when I install the balance. 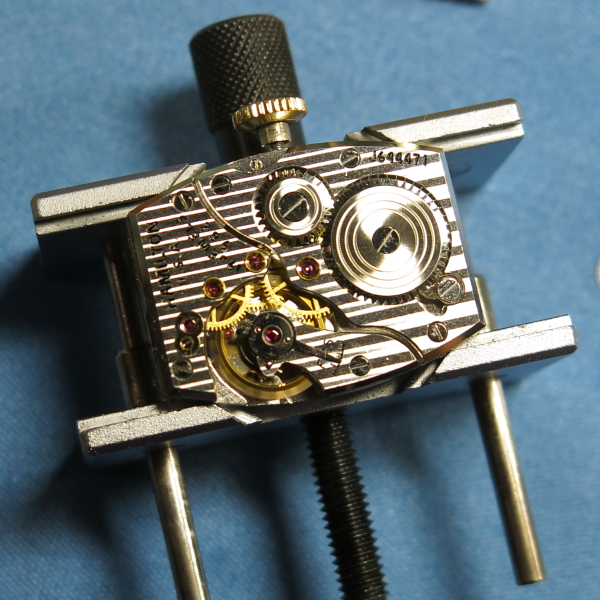 Nothing wrong with this performance.  It doesn't get much better than this. 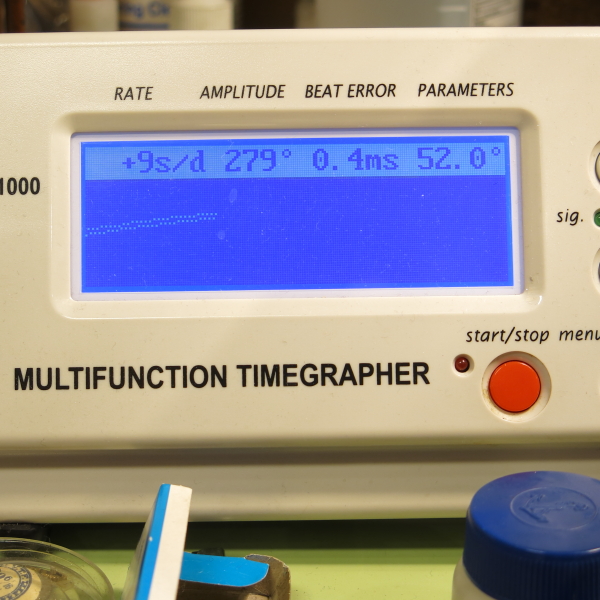 A new crystal and a period-correct strap make this Stuart look like it just left the showroom floor.  It's a small watch by today's standards and is perfect for a woman who like vintage watches.

This strap is even a "short" which means my wife might like it.  I have found that giving the occasional watch to my bride is a good strategy for being able to buy additional projects.  That's a good tip for you new collectors out there who are running out of hiding places for your watches. 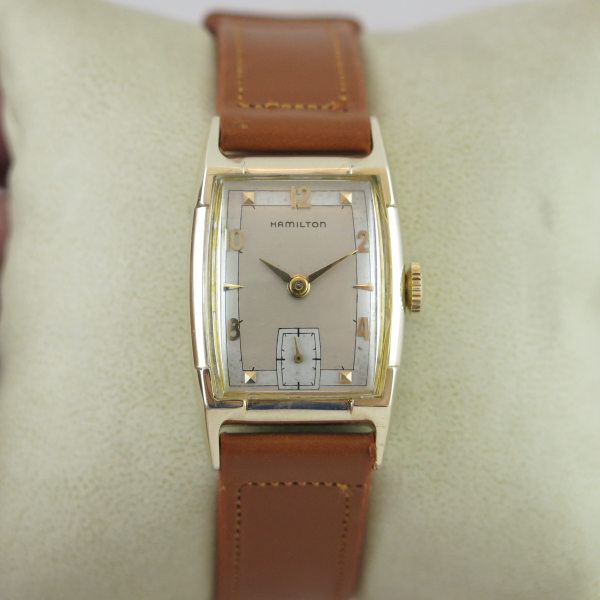