The 1960's was a dynamic period for Hamilton.  They were very busy with integrating acquisitions like Buren, joint ventures with Ricoh, and introducing lots of new models with US-made and Swiss-made movements in manual winding, automatic or Electric grades.  I guess you could say they were "pulling out all the stops" to compete in a rapidly evolving watch industry.

One of the new models that lasted only a year was the Accumatic A-604. 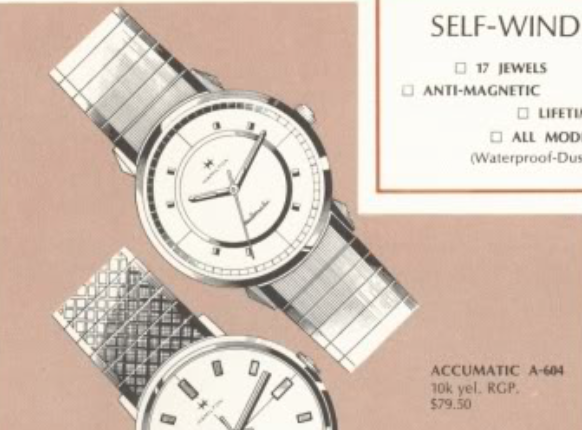 The Accumatic A-604 came in a 10K RGP case with a matching expansion bracelet.  It has a unique-looking dial with applied markers, a thin golden ring towards the center and a golden reflector ring around the perimeter.

Inside the watch you'll find a 17 jewel Hamilton 694A automatic movement.

I recently landed an A-604 project watch and it wasn't until I started to think about the blog that I began to wonder about it.  If you look closely at the catalog image and then at the actual watch, the lugs on the project watch case are slightly different.  Is this a replacement case?  Also the hands aren't an exact match either.

The dial has a couple of scratches above the word "automatic".  It looks to me like someone tried to remove a spot but instead made things a little worse.  Fortunately they stopped. 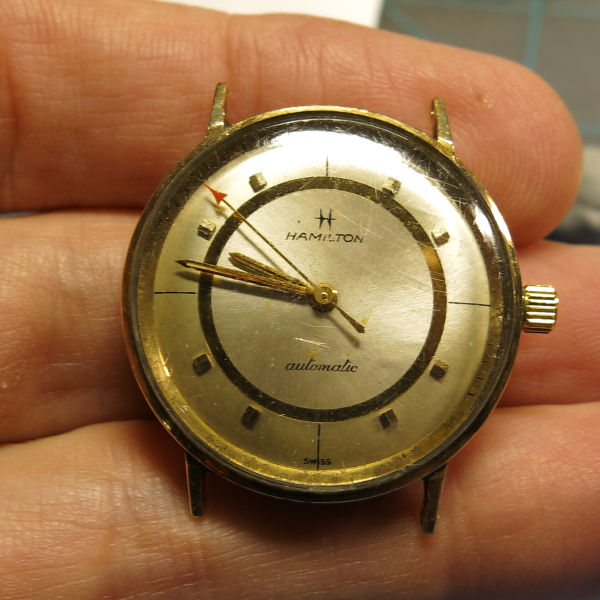 Flipping it over, the deep pie-pan case back clearly contains an ETA automatic.  The crown is a replacement but that's not unusual, especially on water-proof models. 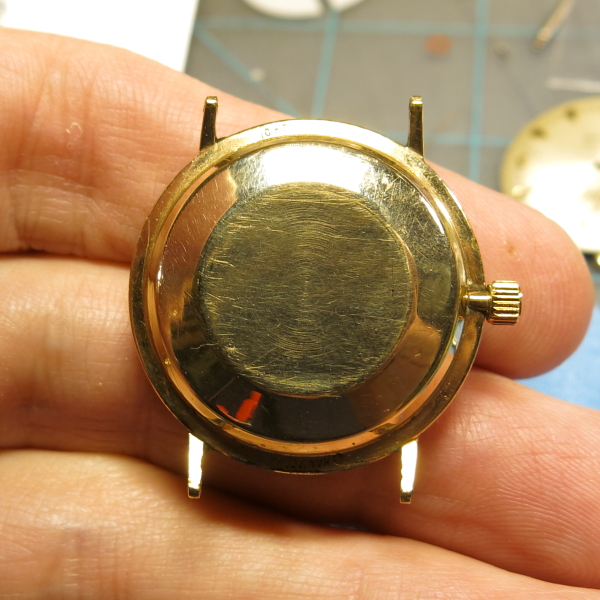 With the crystal lifted out of the way, the golden reflector ring is printed with minute marks and larger lines at 5 minute intervals.  Some of the printing has been lost to time.  The second hand has a red arrow tip.  That's not shown in the catalog but it could still be original... it wasn't uncommon for Hamilton to use what they had on hand when it came to the busy seasons of Christmas and graduations.  Everything fits nice and snugly so all the signs point to this being the original case, but it's not an exact match.  Maybe getting cases for this model was difficult, which was why it was a one-year wonder?  Beats me. 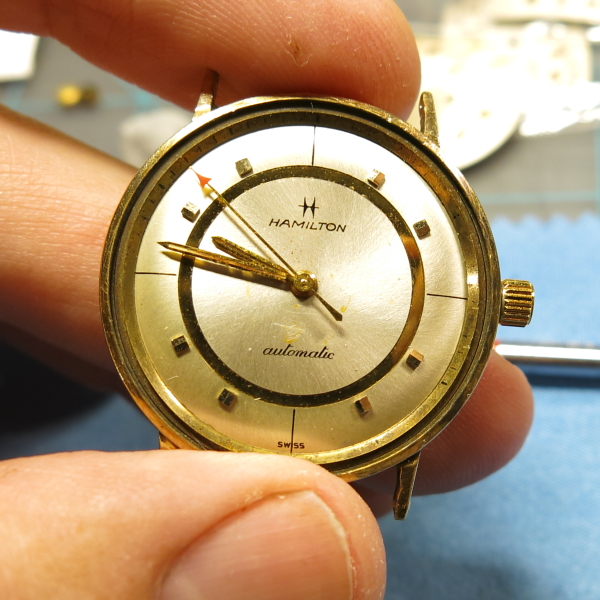 Lifting the reflector ring exposes the seam in the two-piece stem.  Now the movement and dial can come out. 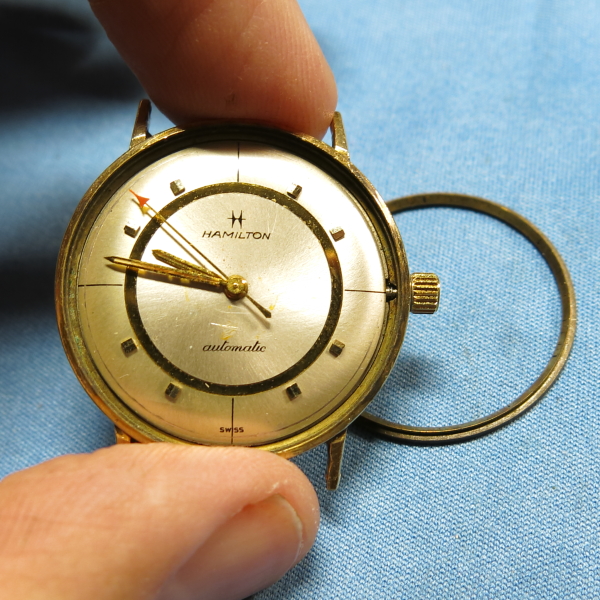 This movement is filthy and obviously hasn't been properly cleaned in a long time.  It's also missing one of the dial foot screws.  Fortunately there is no rust anywhere, so this should clean up nicely. 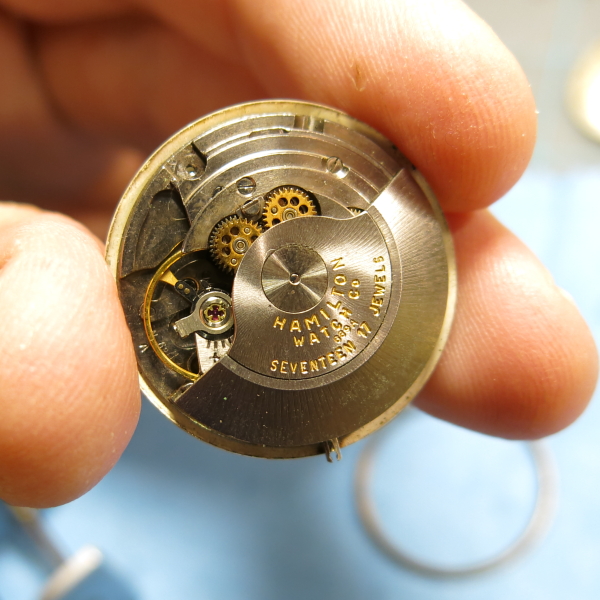 Based on the case markings this is clearly a Hamilton case.  The six digit model number ending in 64 would be a clue that this was a 1964 model.  Hamilton watches were introduced in the Fall of the preceding year, so maybe that's why this has a 64... I don't know for sure.  I don't recognize the case maker logo and the printing inside is heavier than typical but I have not doubt that it's a legitimate case. 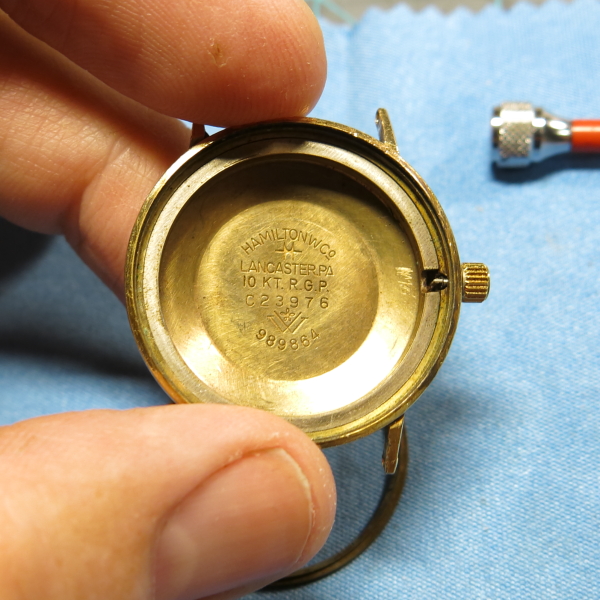 With the dial and hands removed, the dial-side of the main plate is just as dull (dirty) as the back, but there's no rust to be seen. 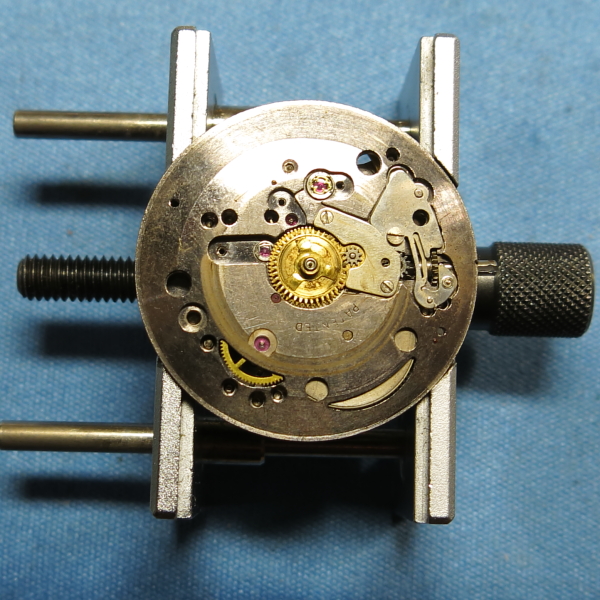 Everything is cleaned and dried.  I didn't do too much to the reflector ring, as I didn't want to lose any more printing, although it might look better if I polished it up a little.  Everything else looks nice and shiny, just as it should. 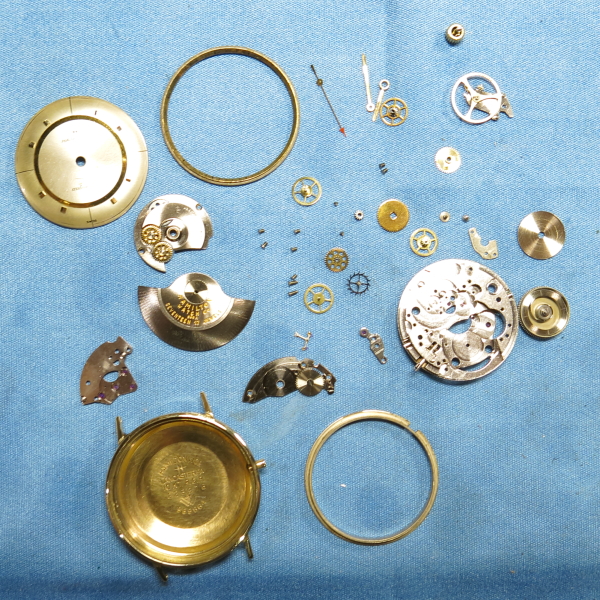 The movement is running but it took a little tweaking to get it to start.  I had to get the balance to be positioned just right to get it to swing.  I have a feeling the balance is not "in beat", meaning not lined up properly with the pallet fork. 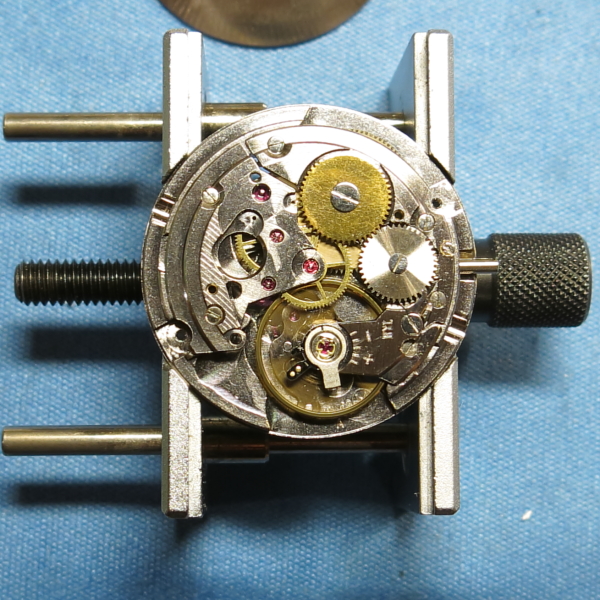 Initially I thought I was in the clear, as the two lines on the timer were right on top of each other.  Then the beat error showed up on the screen.  9.9ms is the maximum the timer will go so my suspicions were justified.  Fortunately, the beat error is easy to adjust. 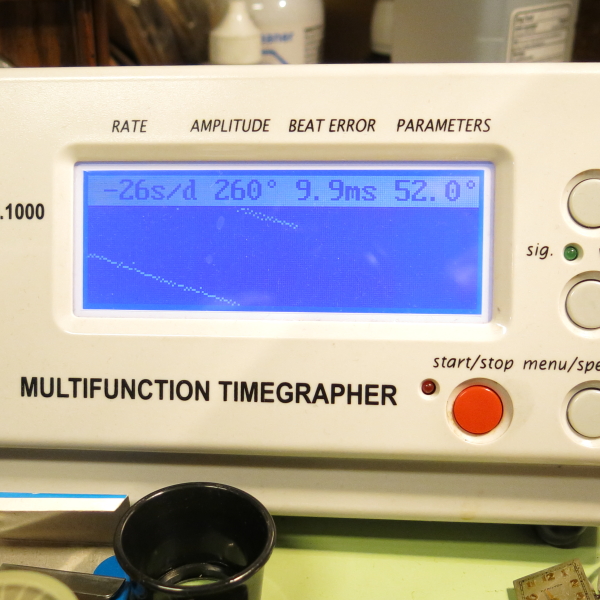 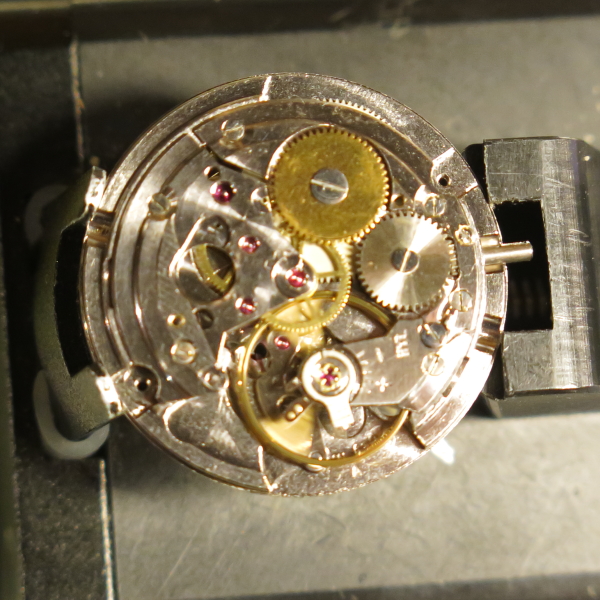 Notice the position of the tab now... it's no longer aligned with that little triangle mark. 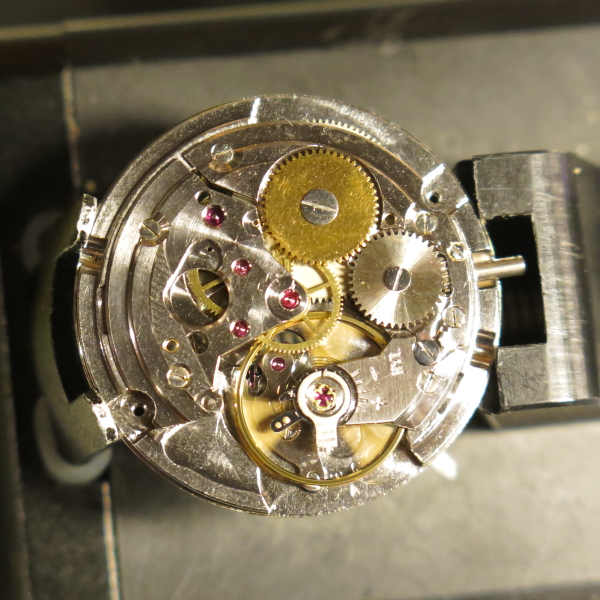 The beat error has been reduced to 7.0ms... that's still way too high but it's moving in the right direction. 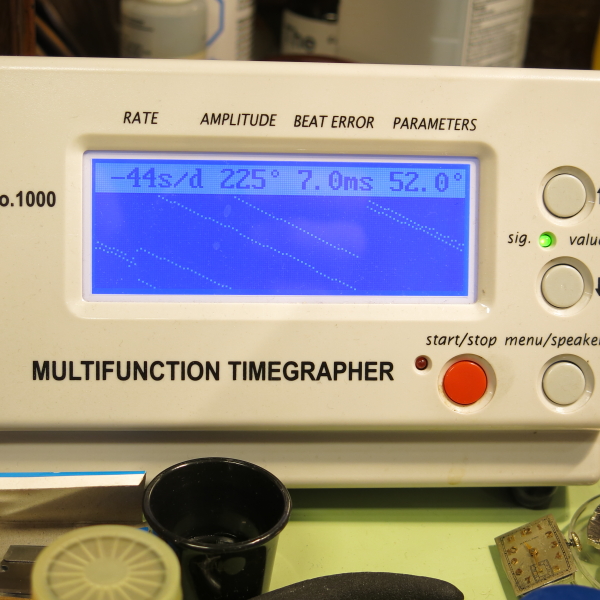 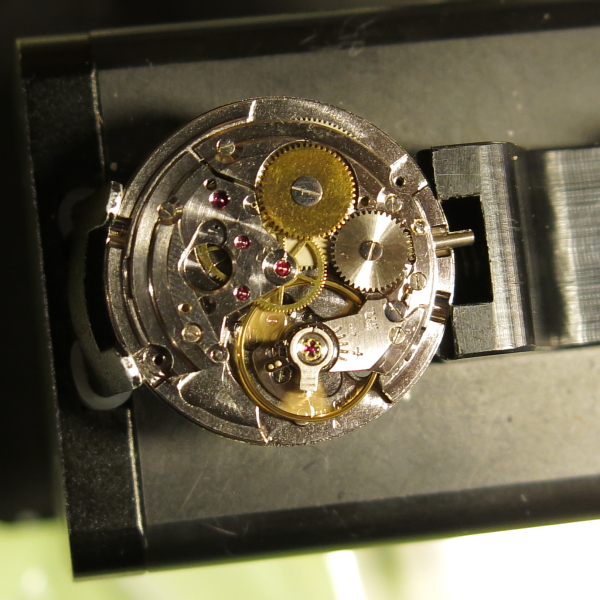 Getting warmer but still not quite there.  On watches with a fixed hairspring stud I would be tempted to stop but this watch is so easy to adjust I would feel guilty not getting it even better. 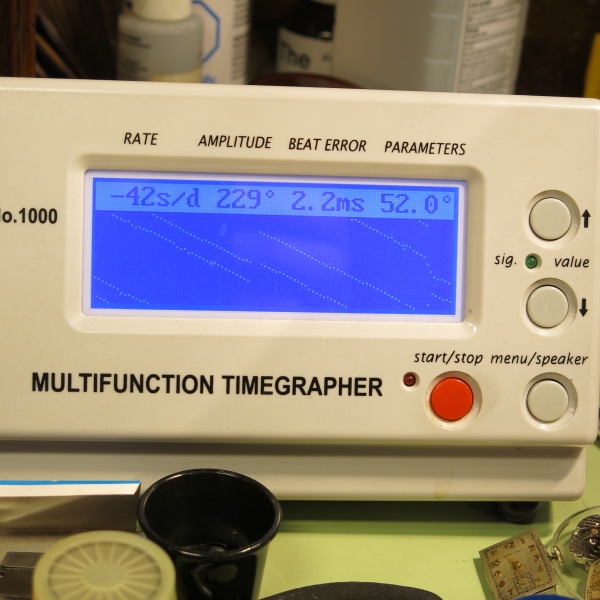 You may not be able to tell I moved it but I moved it a little more clockwise. 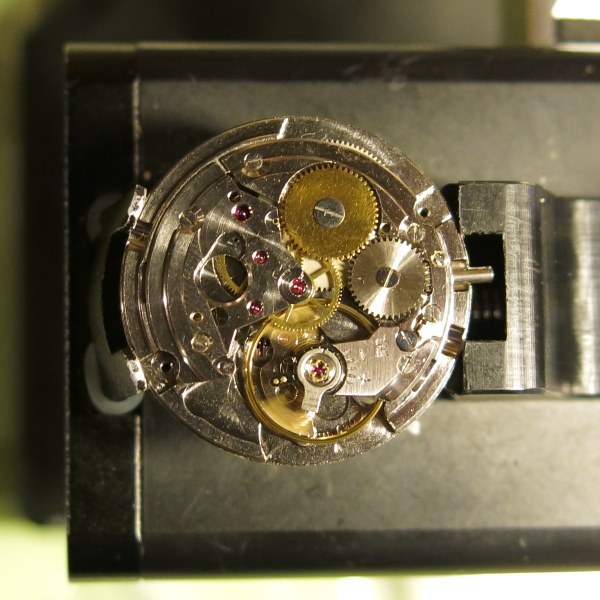 0.4ms... not too shabby.  I could be even better but we're talking a very small adjustment at this point and anything less than 1.0 is acceptable in my book.  Now I can tweak the regulator index to speed the watch up. 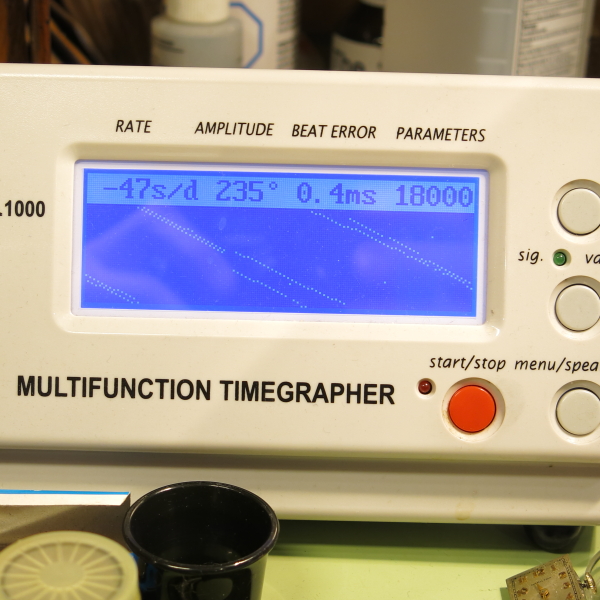 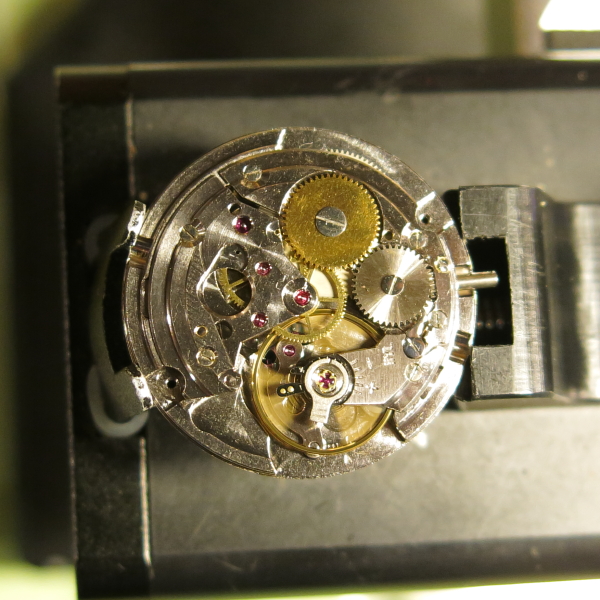 There... the beat rate and beat error are just as they should be.  The amplitude of 237 degrees is fine, I haven't fully wound the watch yet because there is no crown on the stem. 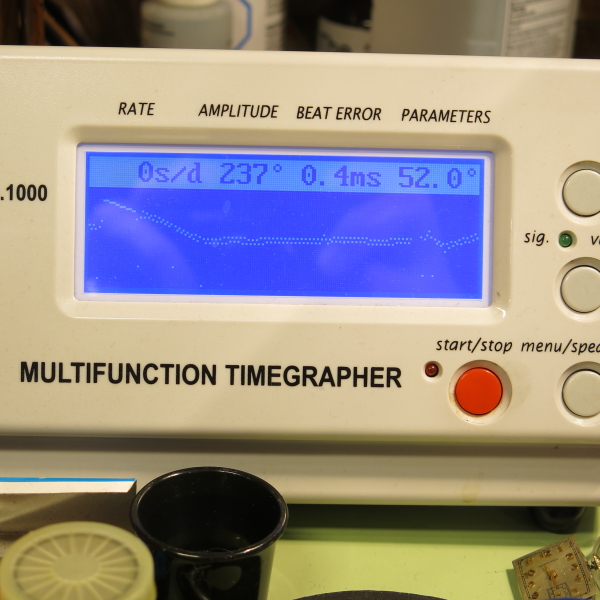 I can put the oscillating weight back on and get the movement ready to be reinstalled in the case.  Notice how bright and shiny it is after a trip to the spa. 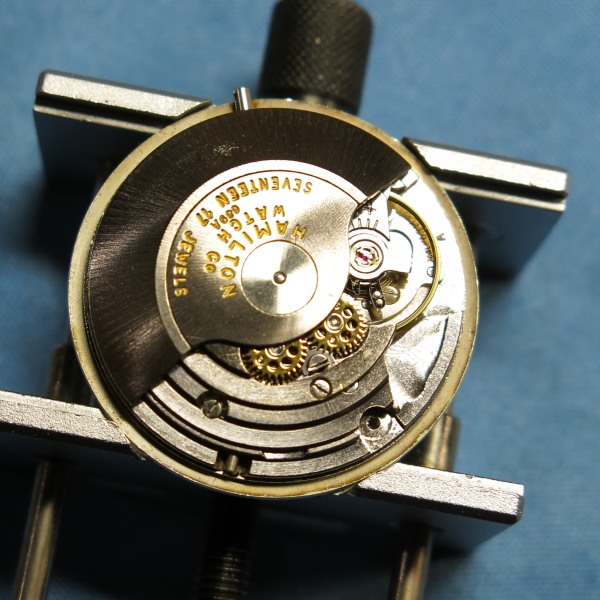 A 30.6mm GS PHD crystal should do the trick when it comes to closing up the one-piece case. 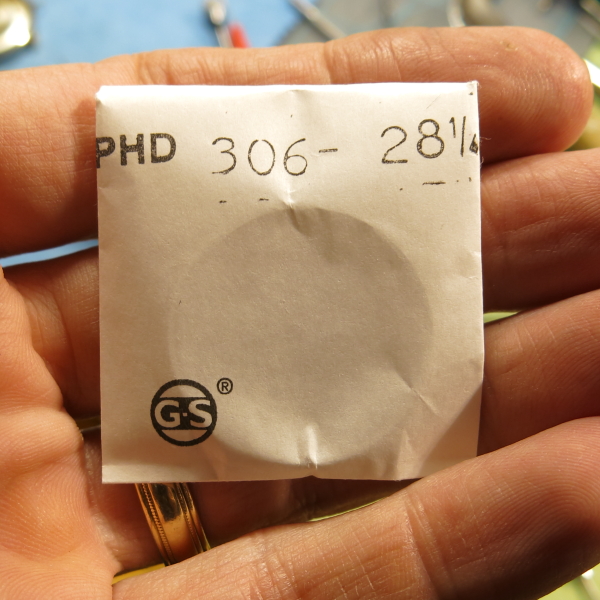 The finished watch looks great with a fresh lizard strap and a new crystal.  The crown looks a little larger than perhaps it should be, but it's still very small.  At least there's enough "meat" there to wind the watch and set the time - sometimes crowns are so small they're hard to grab ahold of.  I still don't really know what to make of the case... is it original or is it from another model?  One thing is for sure, it's clearly a Hamilton case so I suspect it left the factory this way. 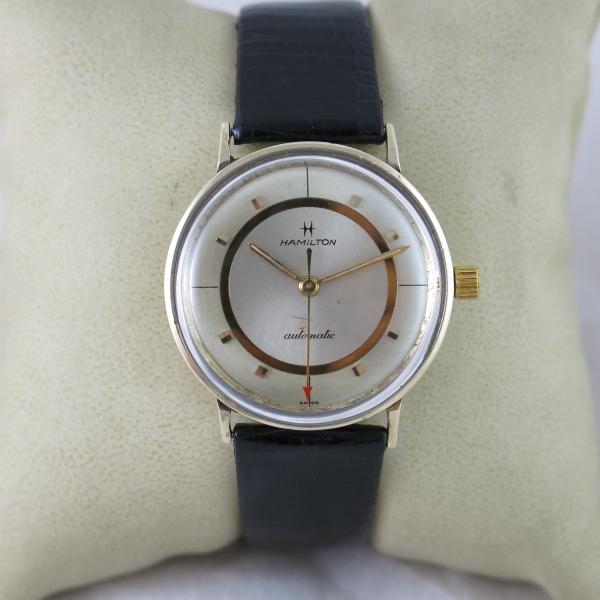