Hamilton made a lot of calendar models in the 1970s with manual winding, automatic and even electronic movements.  The majority of models featured ETA-based movements of various calibers.

I recently happened upon a watch that I have been unable to identify in the catalogs but based on the model number I would say it's from circa 1975 since there are other model numbers in the same range.

My project watch is actually quite large and measures almost 36mm across.  It has a stainless steel case that could use a good polish.  The dial is very interesting and features a unique font for the numerals on a parchment-like textured dial. 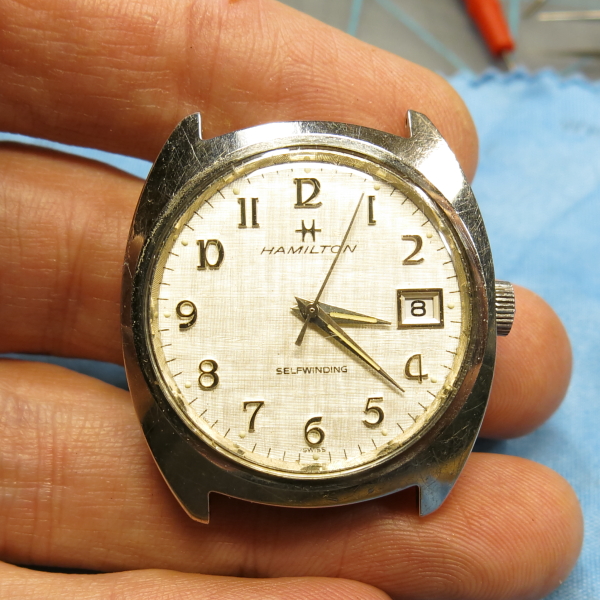 The model number of this watch is 836012-3.  The -3 indicates the case is stainless steel.  I gather from the movement inside that the 836 represents the caliber of the movement.  012 may mean it's the 12th model to feature the 836.  Although it looks like the case might be a one-piece design, the case back actually pops off. 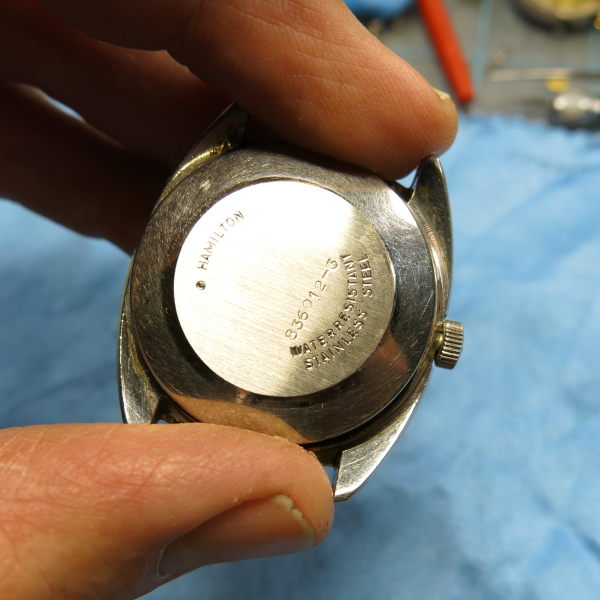 The inside of the case back is unremarkable and just says Hamilton Watch Co Swiss. 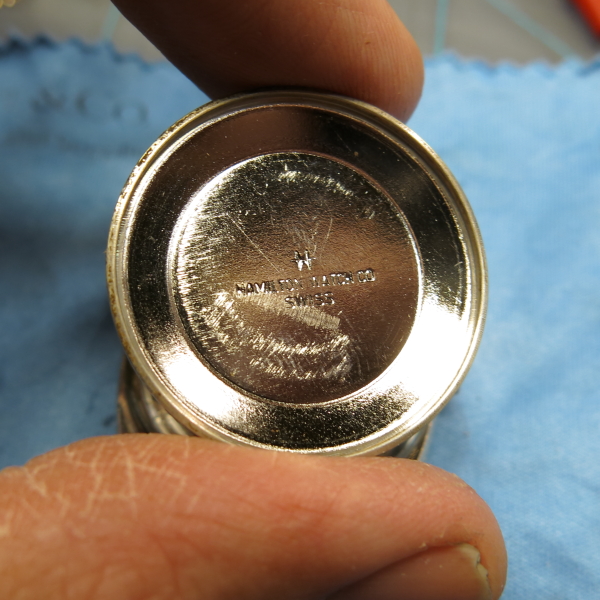 The 836 is a fairly obscure movement and shows up around the 1975/76 time frame.  It looks like most of the other 1970's ETA movements and it looks a lot like today's ETA grades too. 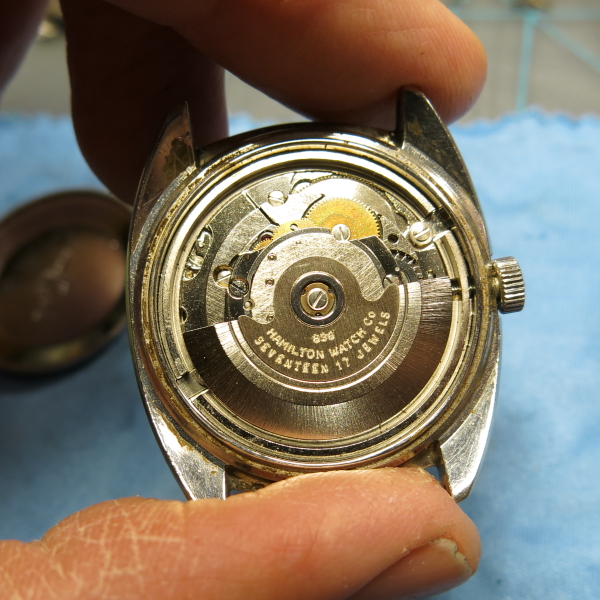 Although the case back doesn't have any watchmaker's marks inside, someone has been inside at least once, as there's a fingerprint on the reflector ring under the dial. 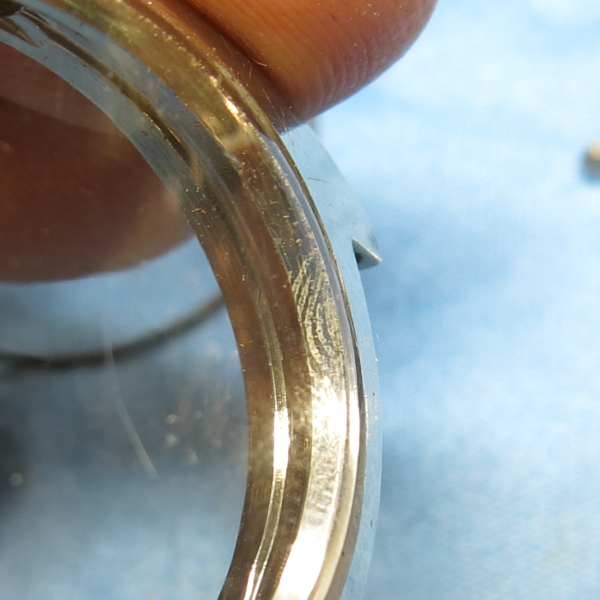 The dial-side of the main plate is different than any other vintage Hamilton I've come across.  The set bridge actually goes over the hour wheel and extends toward the left side of the movement.  Only one screw holds the set bridge in place. 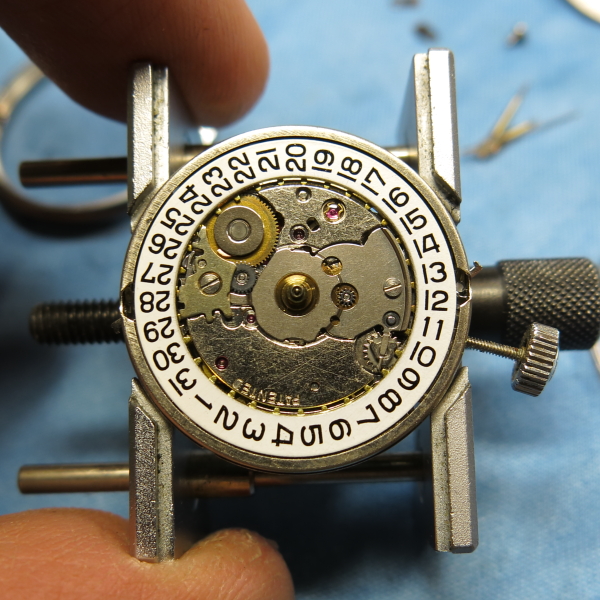 The date wheel index is powered by a horse shoe-shaped spring.  That's a new feature for me too. 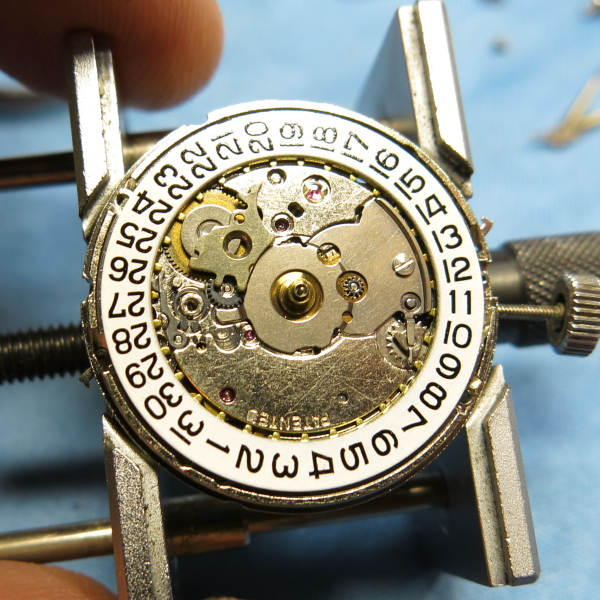 This movement features a quick-set date setting complication with a three-pointed gear near the stem that advances the date wheel. 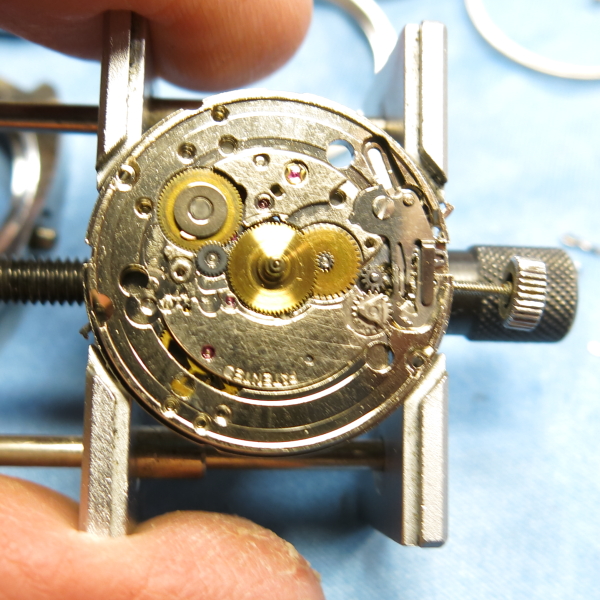 Here's a better shot of the horse shoe spring and index lever.  I don't want to lose this, that's for sure. 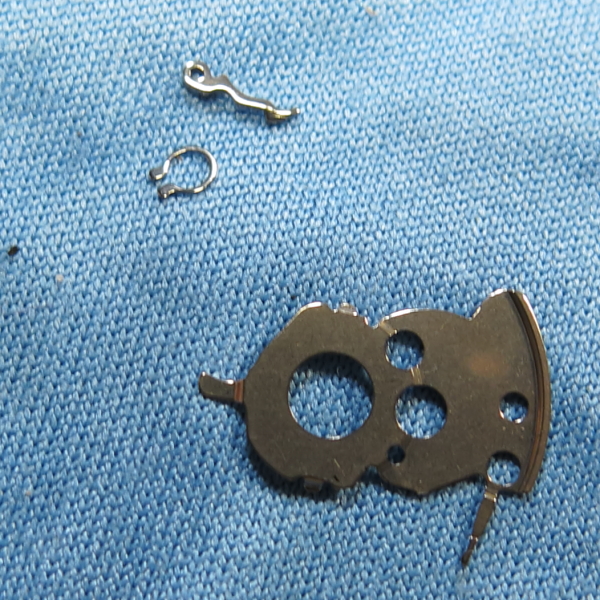 This side of the movement is stripped for parts for now.  I'll get the balance jewels later. 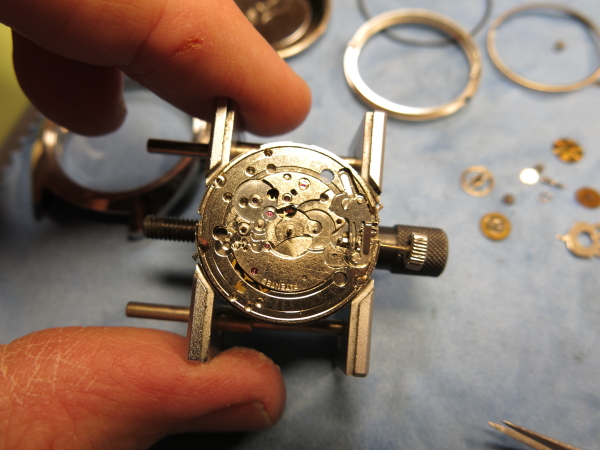 One screw holds the oscillating weight in place.  The two screws hold the framework for it. 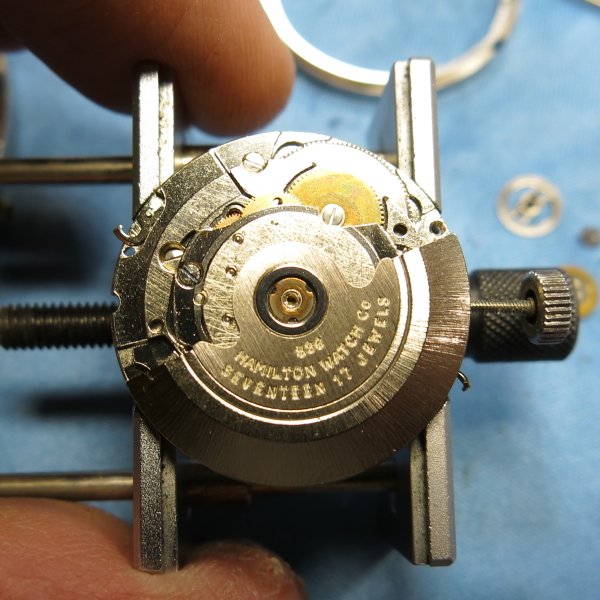 At this point the movement is starting to look like every other ETA movement I've come across.  However, it's its interesting to note it has far fewer bridge screws.  The barrel bridge is held in place with two screws and the train bridge only has one! 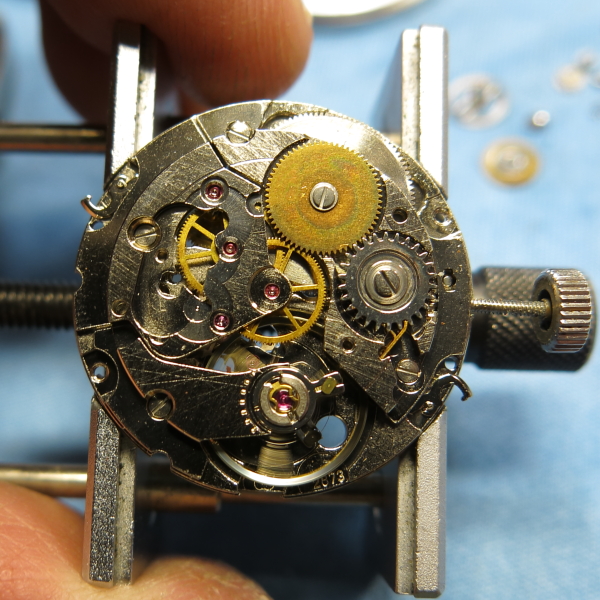 Even the pallet fork bridge only has a single screw. 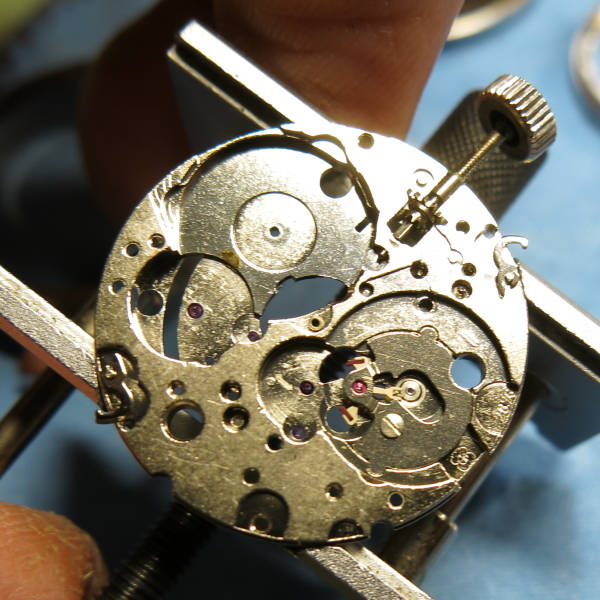 Everything is cleaned and dried, even the o-ring that goes inside the case back. 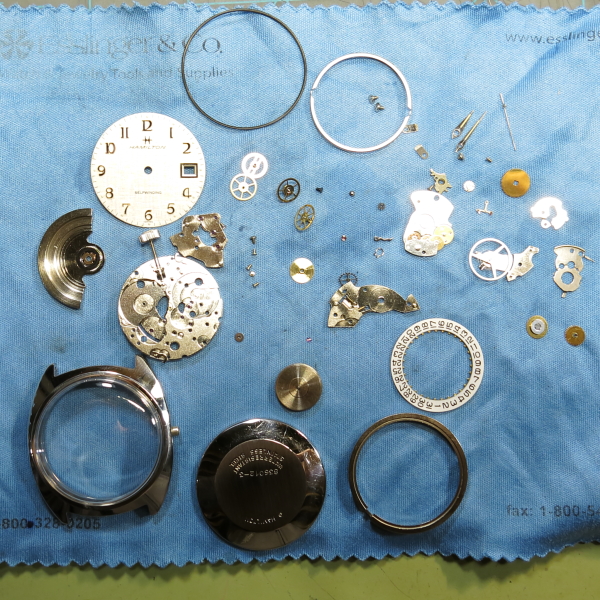 The basic movement is reassembled and ticking away with good motion. 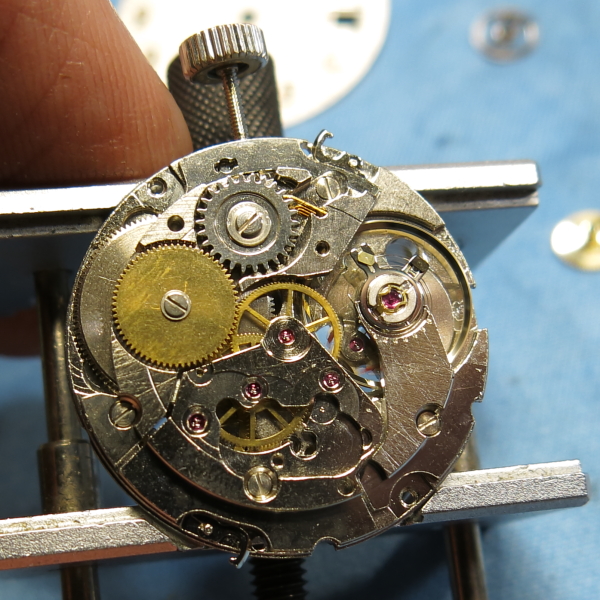 Looks like it's running fine.  A slight tweak to the regulator and the hair spring stud will improve the beat rate and beat error. 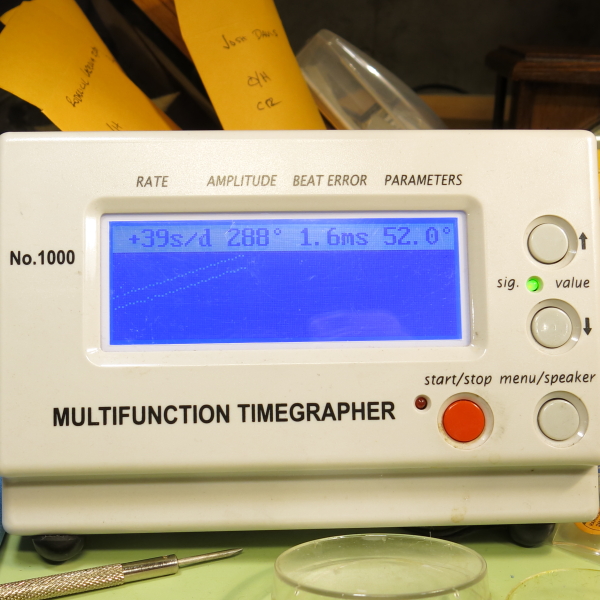 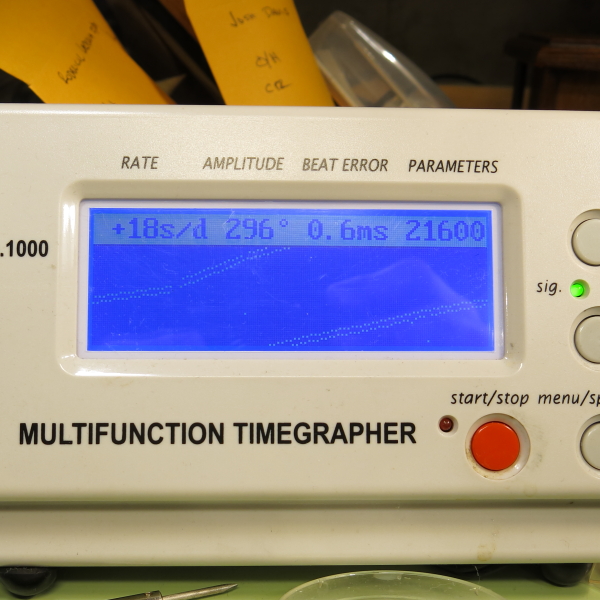 The dial goes back onto the reassembled movement.  I'll advance the time until the date changes and then install the hands at midnight. 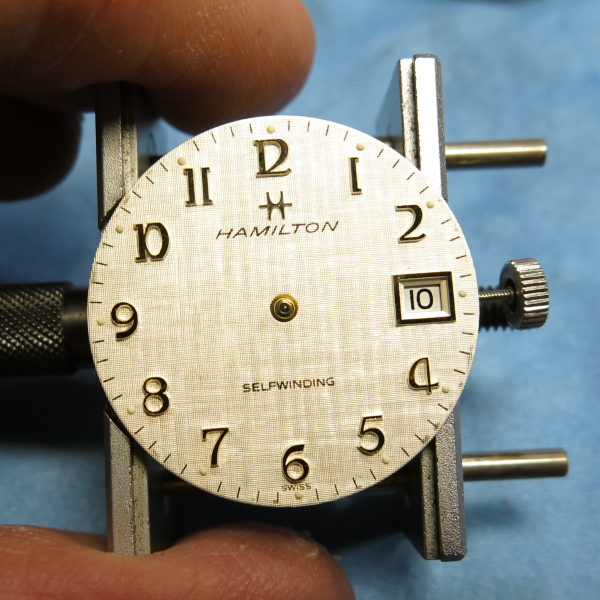 Two case screws secure the movement inside the case.  Now I can press the case back onto bezel and seal the watch back up. 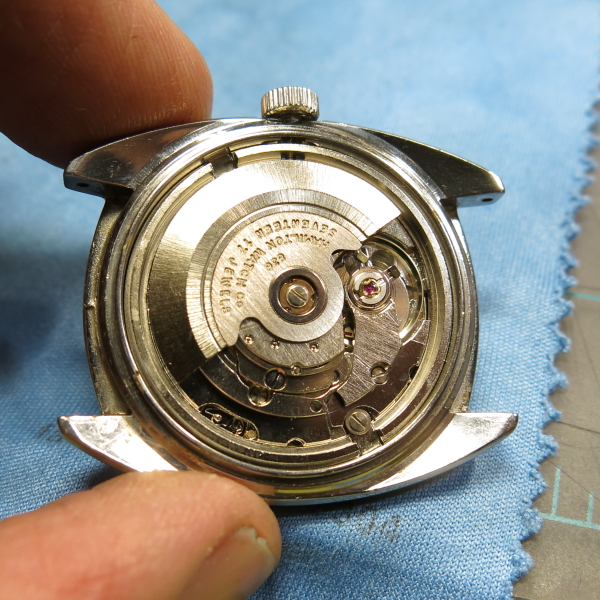 Before I close up the watch, I need to install the o-ring inside the cover. 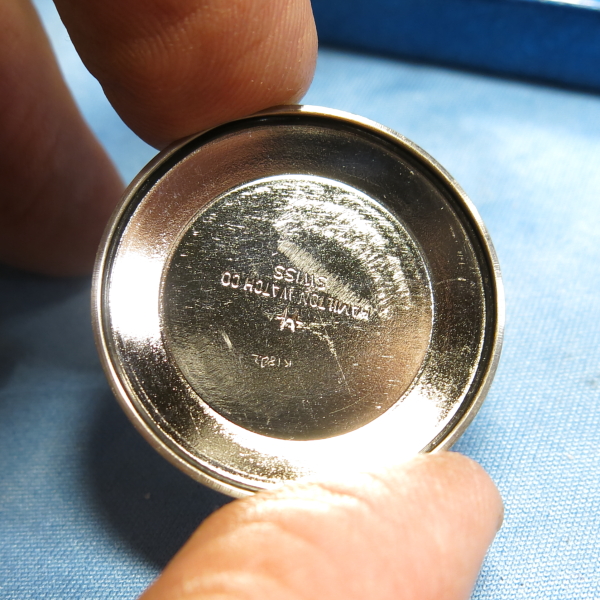 I bone-colored genuine alligator strap is a perfect complement to the parchment-colored dial.   With a new crystal and polished case, this watch looks awesome in my opinion.  It's large enough to even qualify for modern standards... not bad for a 40+ year old watch. 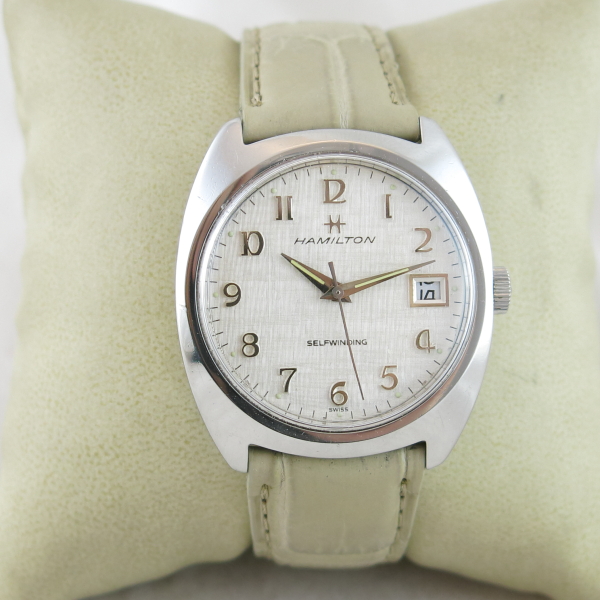