There are a few Hamilton models that you just never see in the wild and one of them is the 1962 Hamilton Montclair II.  It was only produced for a single year and it was expensive, so there aren't that many of them out there. 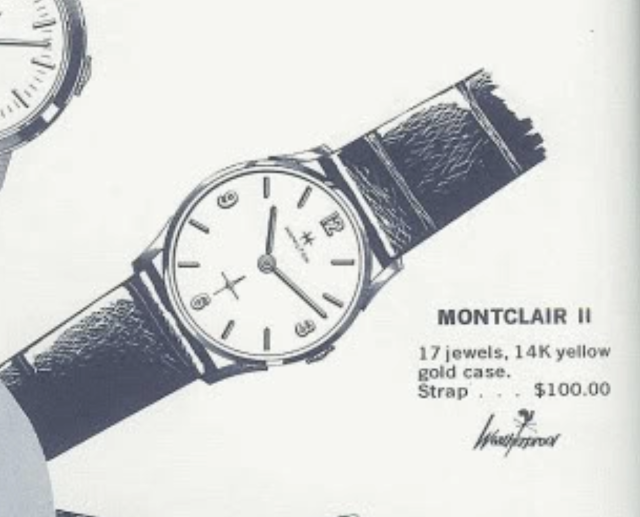 There's a very similar model called the Montclair that was introduced in 1959 and made for three years but if you look closely the lugs are slightly different, not to mention the hands. 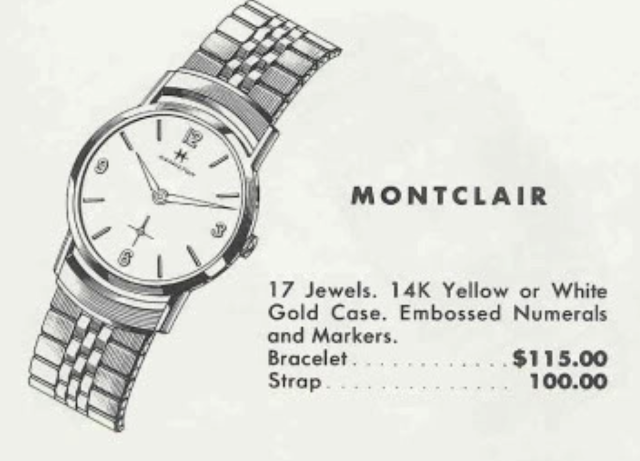 The Montclair II  looks a lot like later Thinline models and you might be inclined to identify it as a Thinline except it won't say SWISS on the dial.  The Montclair II has a 17 jewel 731 movement under the dial that was made in Lancaster, PA.

I recently landed a Montclair II and it's the first example I've ever seen, in the flesh or online. 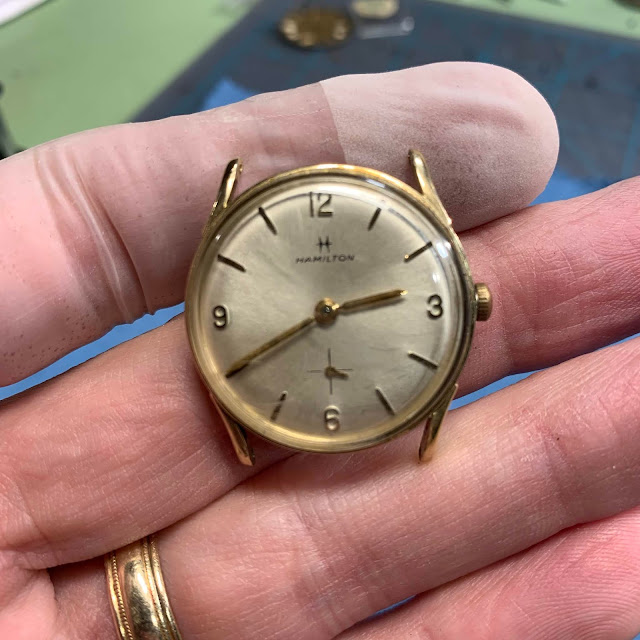 The back of the one-piece 14K case is unengraved, other than with Hamilton and 14 Karat Gold. 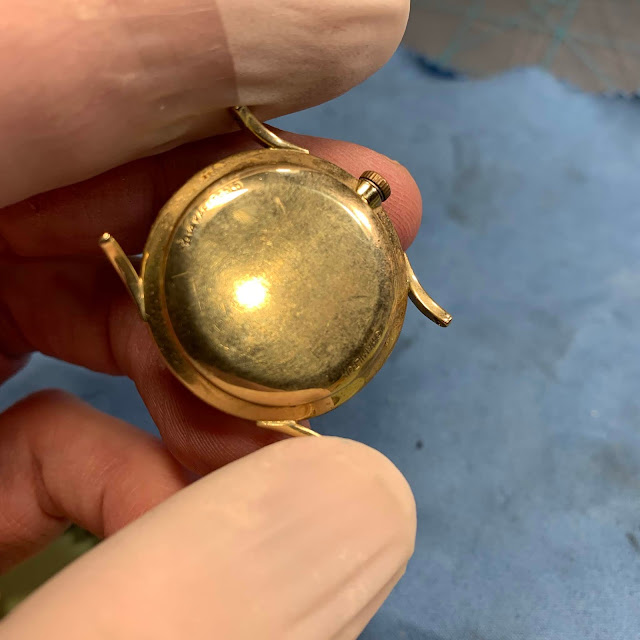 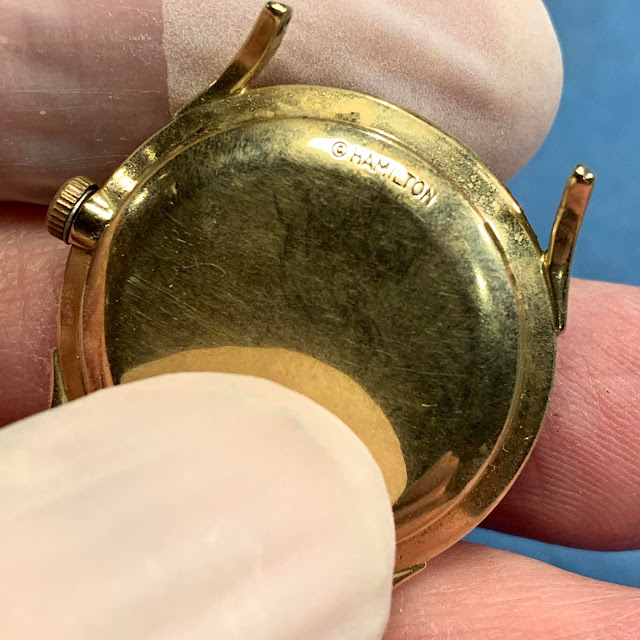 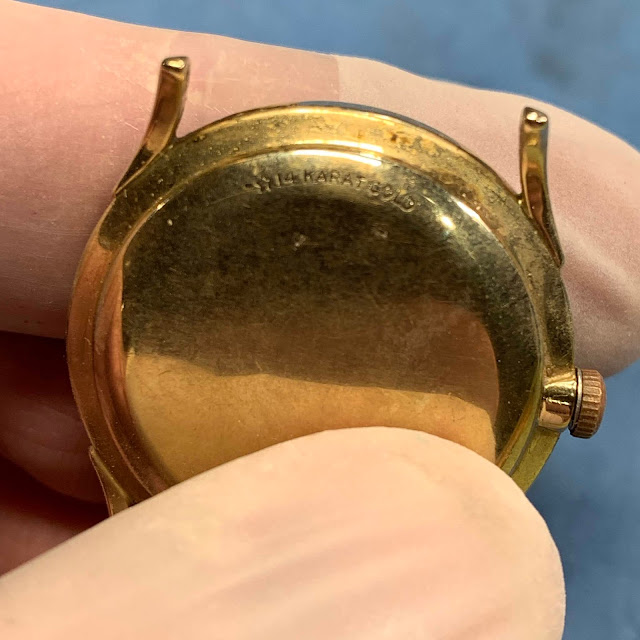 The crown on this example is shot but you can just barely make out the H logo that was on it. 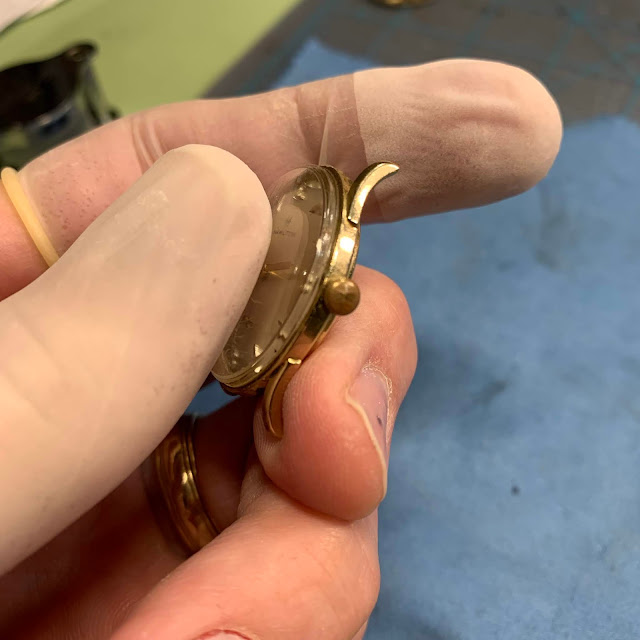 The inside of the case back has a watchmaker's marks inside so it's been overhauled at least once in the last 60 years. 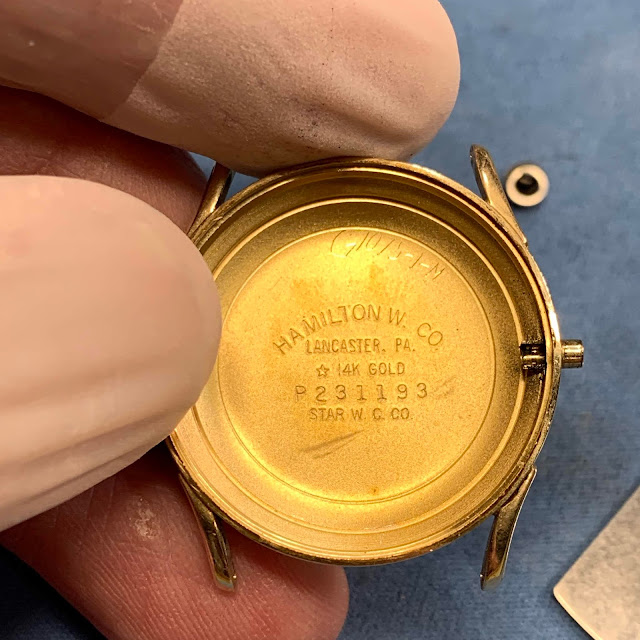 The 17jewel 731 is an upgraded 730 movement, which was an upgraded 747 movement.  The only difference between the 731 and the 747 is the balance is shock protected and it's a Glucydur balance - so there are no timing screws on the balance.  Those are pretty significant differences though. 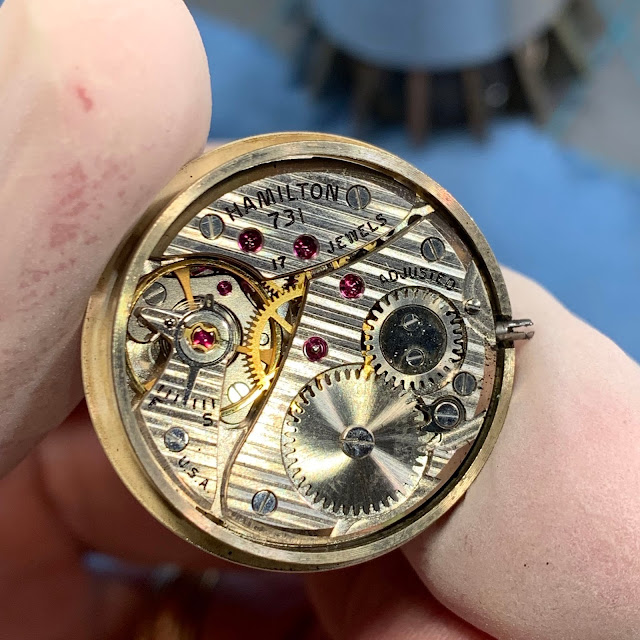 Everything is take apart and cleaned before being reassembled. 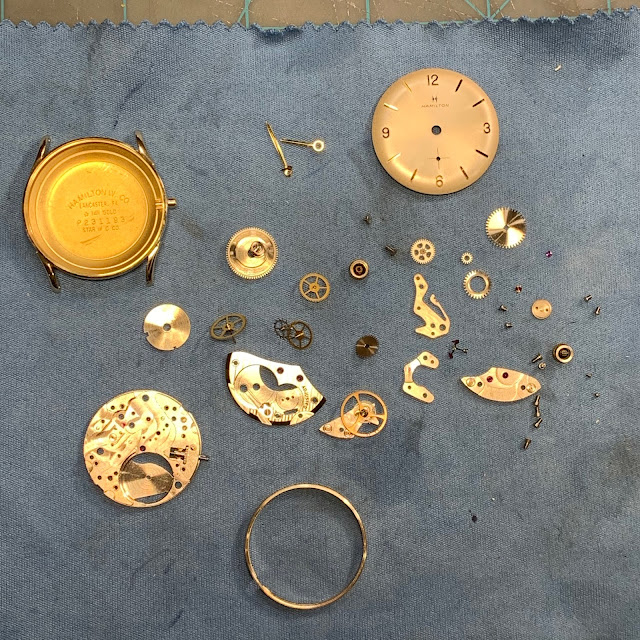 The reassembled movement is ticking away with good motion, so it's off to the timer. 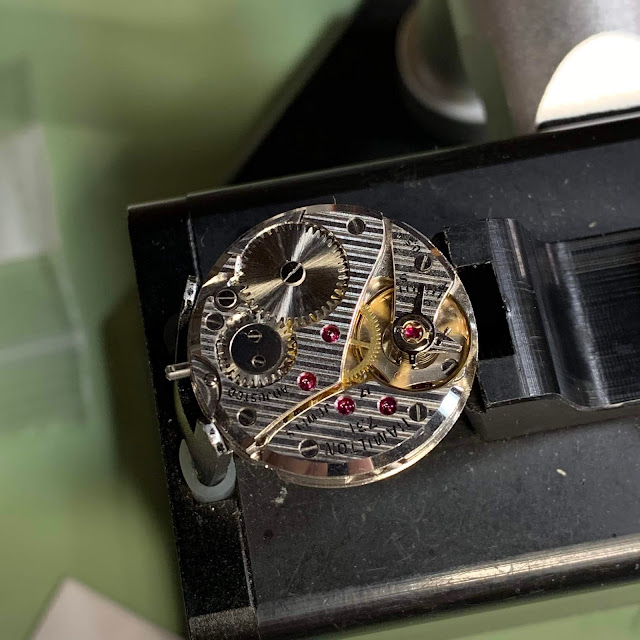 Hmm... the amplitude is a little low at 190 degrees.  I'd like to see it well over 200.  I wonder if the barrel cover isn't seated properly? 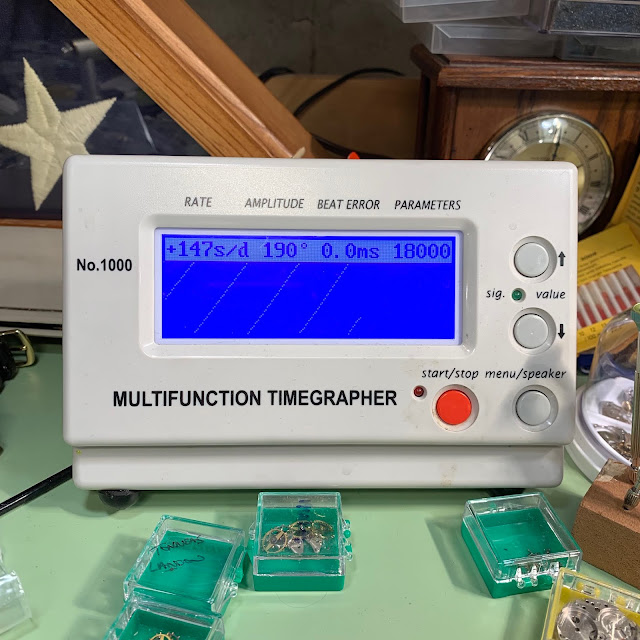 Well, it wasn't the barrel cover or even the mainspring.  I changed both and the amplitude didn't come up.  Fortunately I have a spare 731 movement so I just swapped it out and it's performance is much better. 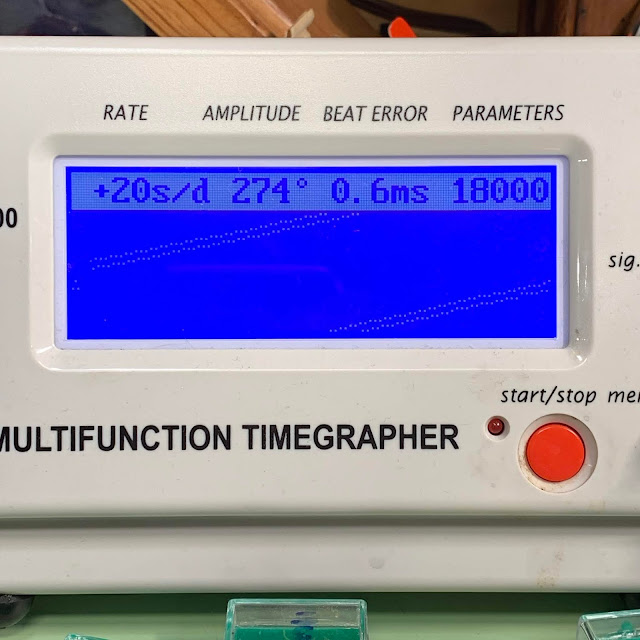 A new crystal is definitely in order and will make a huge improvement. 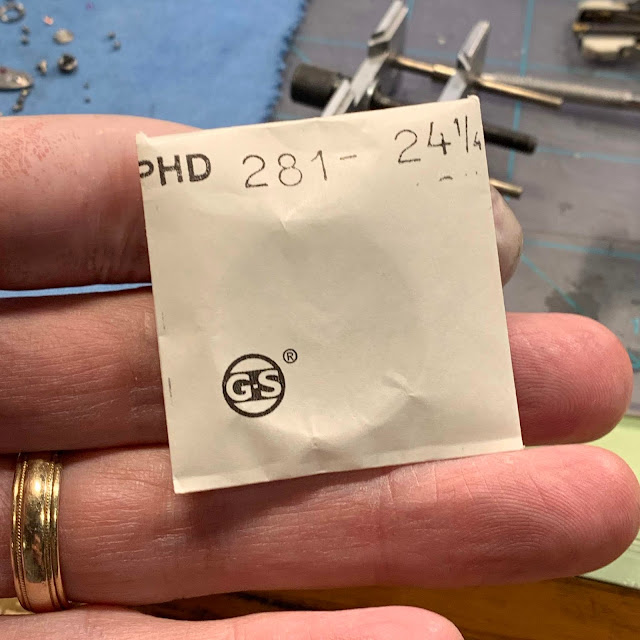 Check out this finished watch... good as new.  I replaced the crown with a new crown, it doesn't have an H logo but otherwise looks very good, I think.  This is a sharp-looking watch but it's not very large, maybe 31mm wide so it's could easily be worn by a woman with today's standards,

The green tinge by the 5 marker is actually a reflection of my case opening ball that happened to be in the light tent when I took the photo. 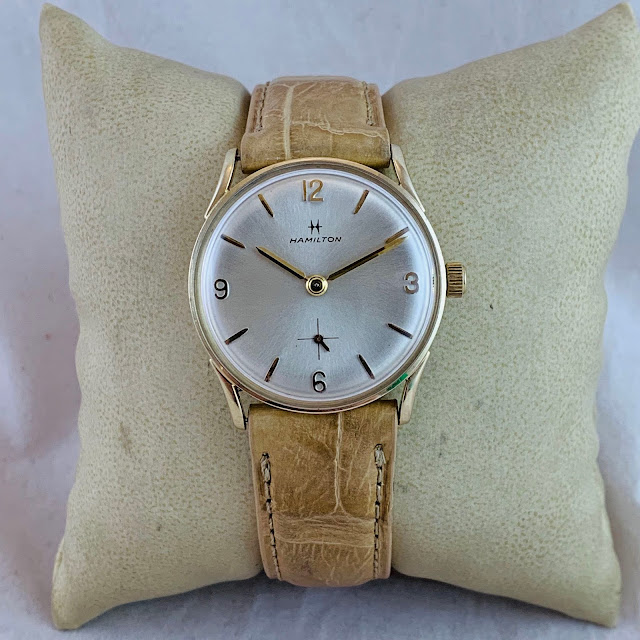