I was recently paid a very nice compliment and it was also a very fitting analog for Easter.  Although I posted a watch recently on Easter Sunday, the season of Easter lasts for seven weeks and goes through Pentecost.  So technically this is also an Easter post and I thought I'd share the sentiment with you.

My project watch is a Coral Midas.  The model was introduced in 1940 and made through 1941.  Like the regular yellow gold Midas, the Coral Midas came in a solid 14K case but in rose gold, which was very fashionable before WWII. 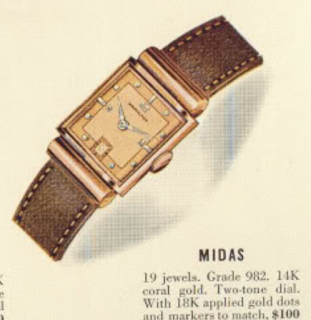 The dial on the Coral Midas is a two-tone coral finish and the dial features rhodium plated solid 18K gold numerals, markers and dots.  The hands are also rhodium plated to match.

My project watch has seen better days.  The crystal is tired plastic and just replacing that will be an improvement.  The case is a little worn but it's also a bit scratched so I will be very careful when I polish it.  If you've got a good eye you might spot that the hour hand doesn't match in style or in length.  If you've got an even better eye, you might wonder if the crown is rose or yellow... to be honest, I wasn't sure either. 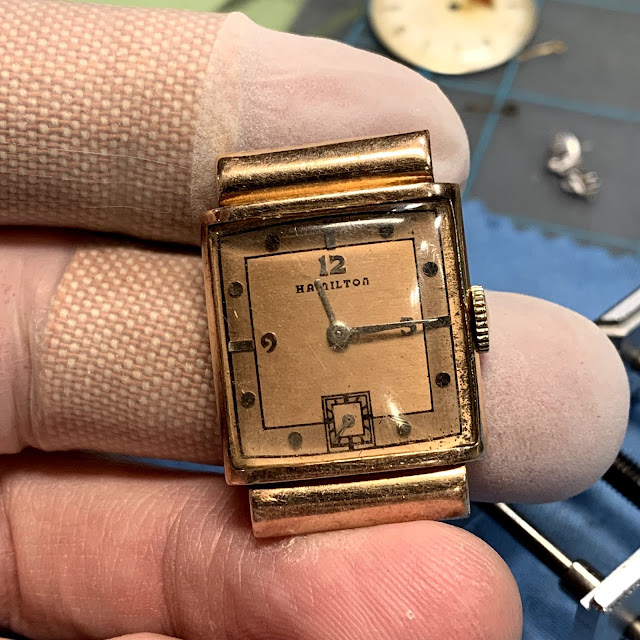 The back of my project watch is nicely engraved with a presentation from 1941.  The serial number of the movement dates the watch to 1940 so this watch probably sat in the jewelry store for a few months before making its way to its original owner.  It looks like it may have had a sticker, or something, affixed to the back for a while, as there is a bit of hard residue. 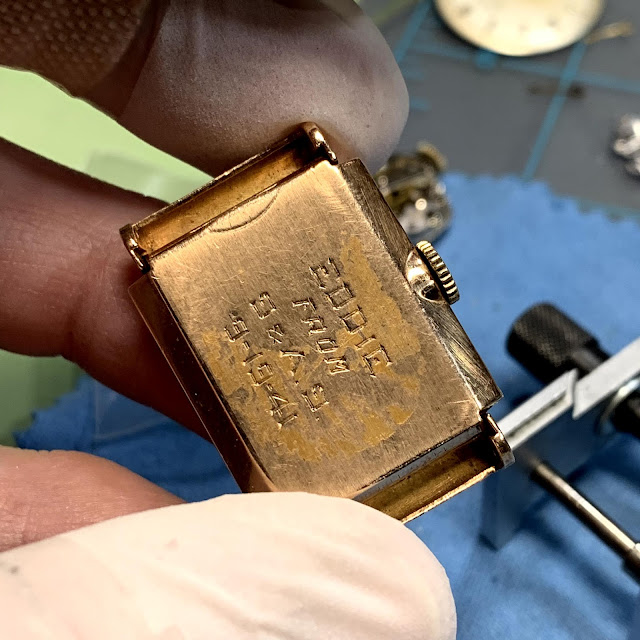 The movement inside is a 19 jewel 982M movement, or Medallion movement, that was newly introduced in 1940 for solid gold (and platinum) models.  It's a more ornamented version of the 19 jewel 982 movement that was already the standard for solid gold models.  Supposedly the 982M was crafted to even tighter standards - although it shares all the same parts with the 982.  It's certainly very nice to look at, especially when it's clean.

This movement is not running.  The balance doesn't wobble so that's a good sign that all it will need is a good cleaning.  We'll find out soon enough. 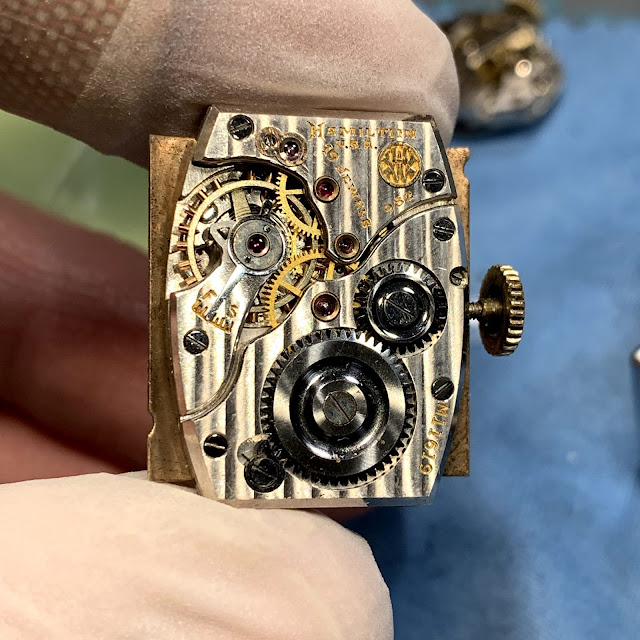 Without the crystal blocking the view, you can get a better look at the dial and hands.  I don't see any obvious tells that the dial has been refinished.  There is no dial pattern number below the seconds track though.  However, if it was refinished it was done a long time ago, based on the aging along the right side.  It was not unusual for Hamilton to refinish the dial as part of their standard service so as long as the dial is correctly done, it doesn't really matter if it's original or not.  In fact, many people who have an "original dial" really have a refinished dial that was redone decades ago. 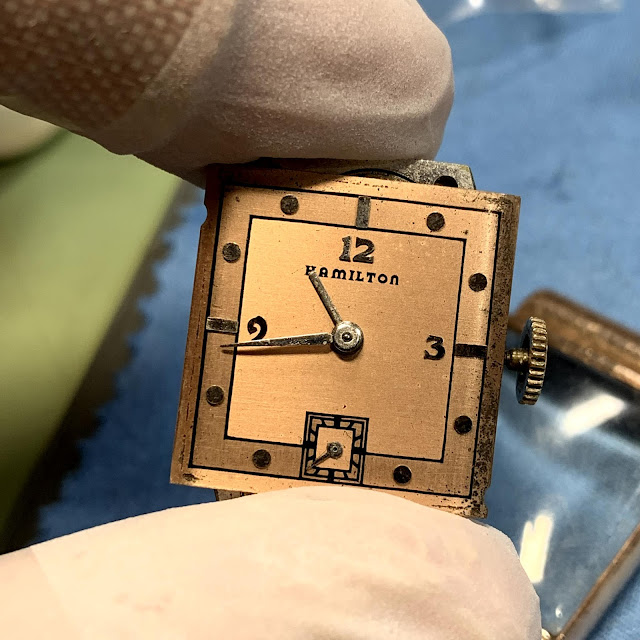 I was unable to get the lower dial foot screw to budge and I was forced to carefully pry the dial off.  Once it was lifted out of the way I saw the reason for the issue - there's a little rust right in the area of the lower dial foot.  There's evidence of moisture going over to the 4th wheel and pallet fork jewels so that may be the cause of the watch stopping.  Hopefully the ultrasonic will work the dial foot screw loose.

If you ever notice there is moisture in your watch, you should open it as best you can and carefully dry it with warm air.  You may want to also have it serviced by a watchmaker, especially if it's been a while since it was last cleaned and oiled. 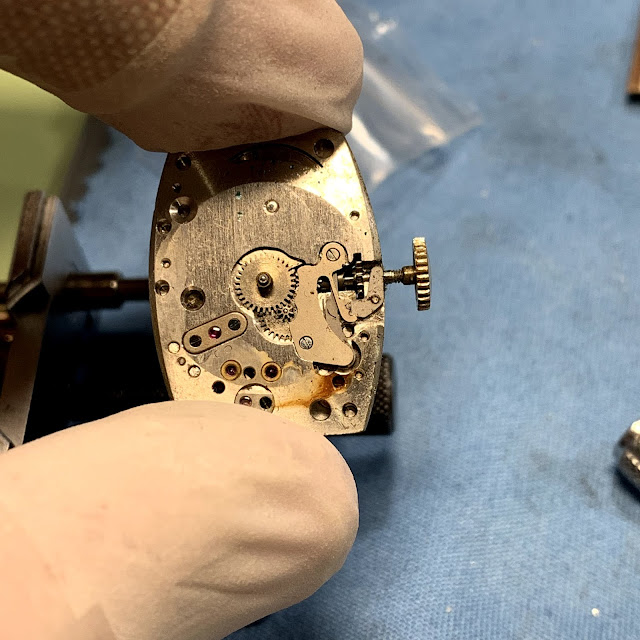 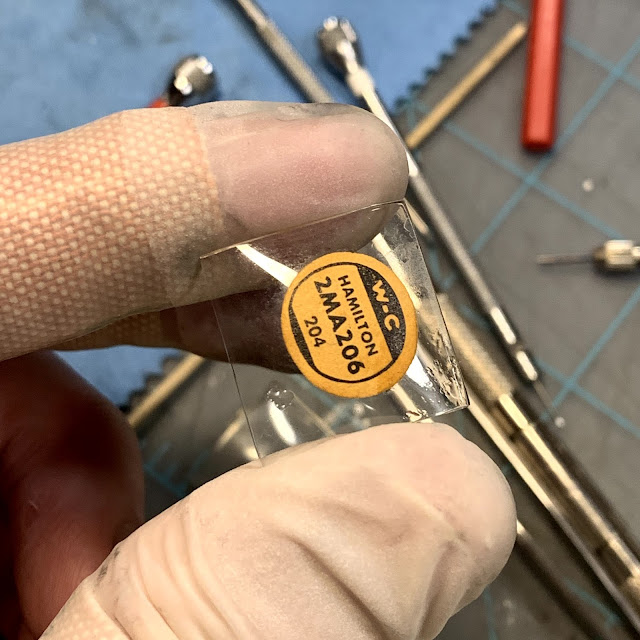 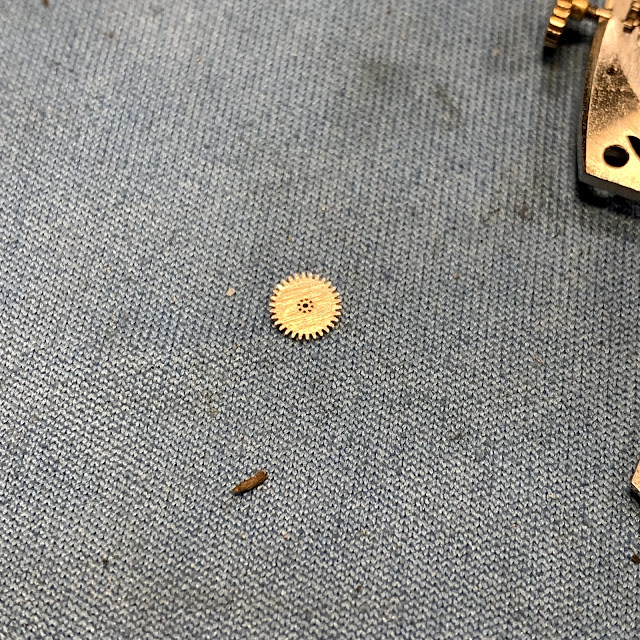 Everything is ready to be reassembled, excluding the old crystal... how'd that get in there? 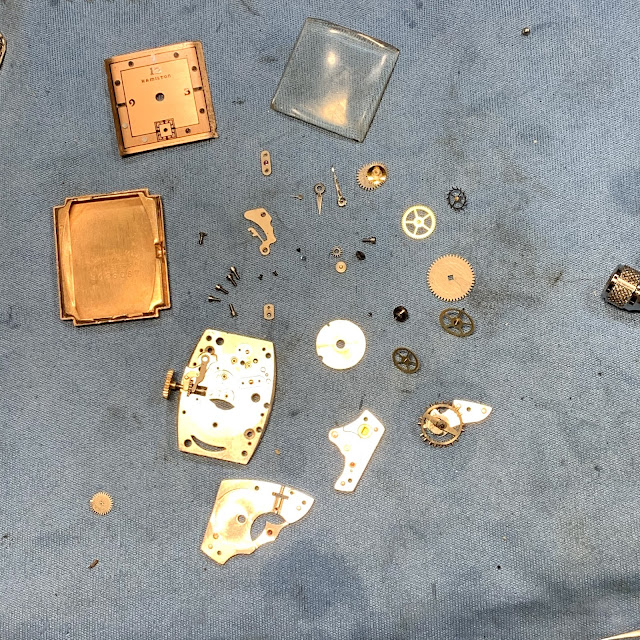 The reassembled movement is ticking away with good motion.  Let's see what the timer thinks of it? 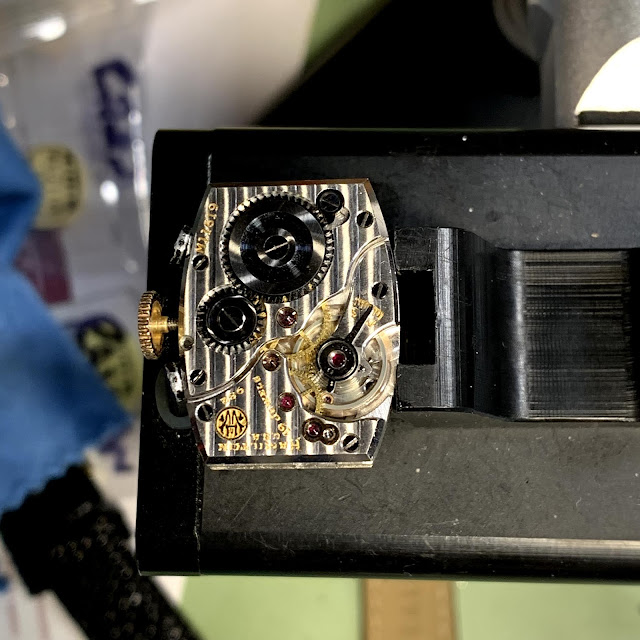 It's running a little fast but that's easily adjusted with the regulator. 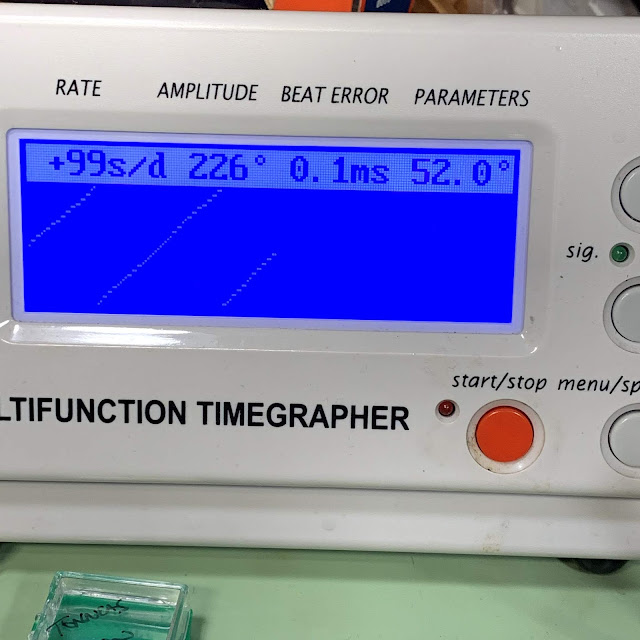 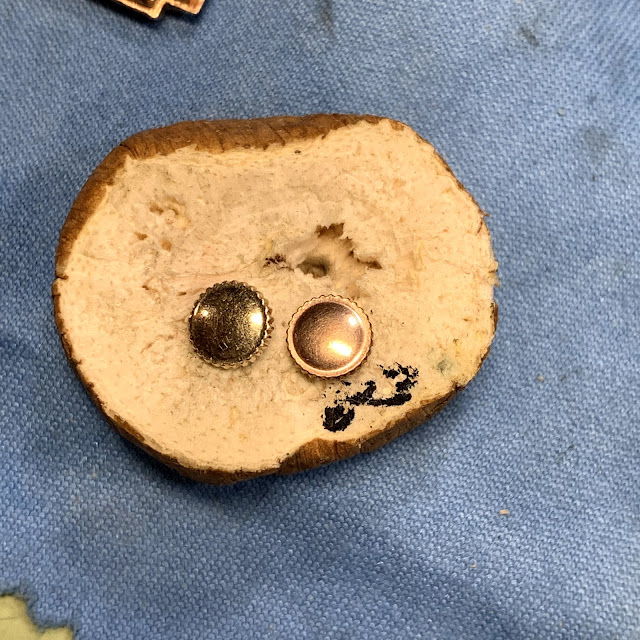 I replaced the hour hand with the proper style and the length is typically determined by the distance from the center to the nearest hour marker.  I don't know if that would be the numbers 3 and 9 or if it should be the rectangular markers.  The minute hand should extend to the nearest minute track.  The glass crystal and coral crown are definite improvements. 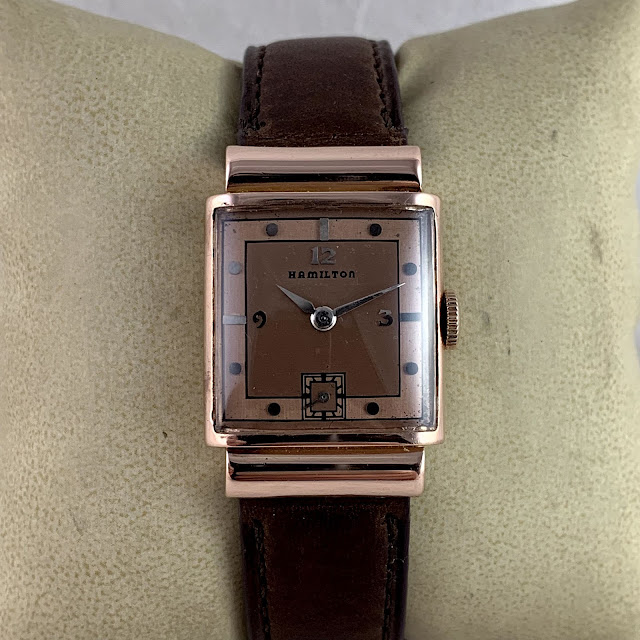 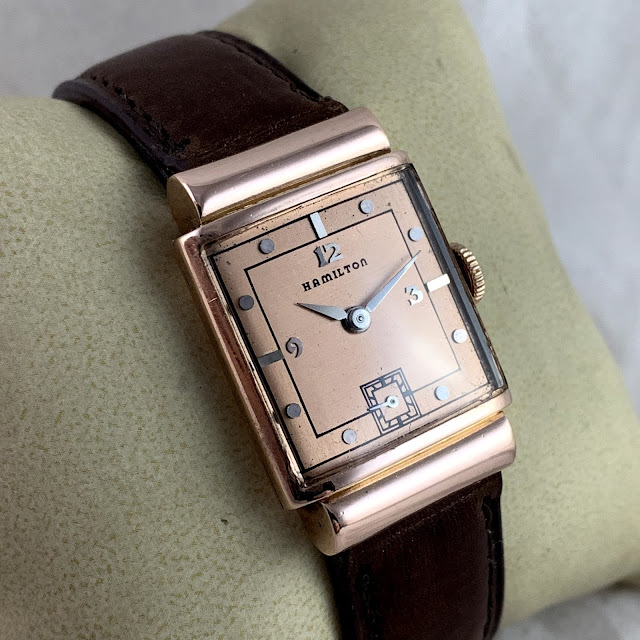 When I went to look at the catalog image of the Coral Midas I saw the hour hand appears to extend to the marker so it should be a little longer.  Fortunately I have a slightly longer hour hand so now the watch is "perfect". 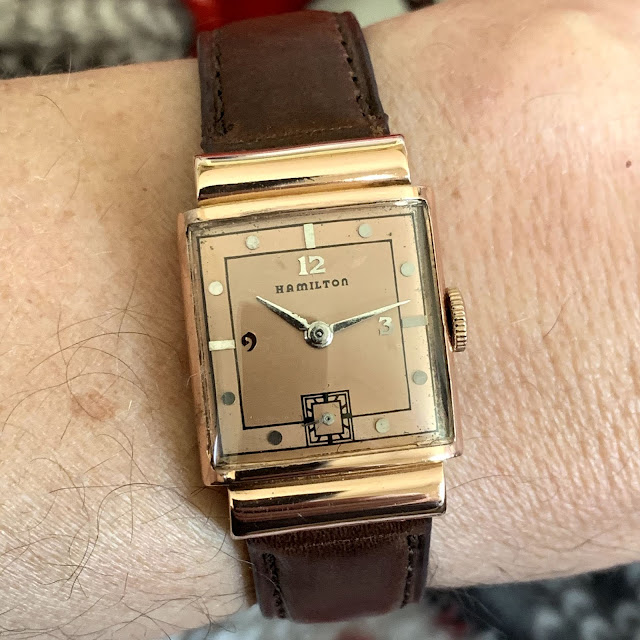 As I said at the start, I was recently paid a very nice compliment by someone I restored a watch for.  One of the things I enjoy the most about this hobby is the happiness that I can provide when I restore someone's father's or grandfather's watch.  What was once broken and battered can be brought to new life by the touch of a master's hand.

What a wonderful message for Easter as well.  No one is past redemption when they find their way to the Master's hand.


The Touch of the Master's Hand


'Twas battered and scarred, and the auctioneer
Thought it scarcely worth his while
To waste much time on the old violin,
But held it up with a smile:
"What am I bidden, good folks," he cried,
"Who'll start the bidding for me?"
"A dollar, a dollar"; then, "Two!" "Only two?
Two dollars, and who'll make it three?
Three dollars, once; three dollars, twice;
Going for three----" But no,
From the room, far back, a gray-haired man
Came forward and picked up the bow;
Then, wiping the dust from the old violin,
And tightening the loose strings,
He played a melody pure and sweet
As a caroling angel sings.

The music ceased, and the auctioneer,
With a voice that was quiet and low,
Said: "What am I bid for the old violin?"
And he held it up with the bow.
"A thousand dollars, and who'll make it two?
Two thousand! And who'll make it three?
Three thousand, once, three thousand, twice,
And going, and gone," said he.
The people cheered, but some of them cried,
"We do not quite understand
What changed its worth." Swift came the reply:
"The touch of a master's hand."

And many a man with life out of tune,
And battered and scarred with sin,
Is auctioned cheap to the thoughtless crowd,
Much like the old violin.
A "mess of pottage," a glass of wine;
A game--and he travels on.
He is "going" once, and "going" twice,
He's "going" and almost "gone."
But the Master comes, and the foolish crowd
Never can quite understand
The worth of a soul and the change that's wrought
By the touch of the Master's hand.

--Myra Brooks Welch
Posted by HandyDan at 8:43 AM