A couple of weeks ago I did a post on the 1968 Fontainebleau.  There are several other Fontainebleu models but only a couple of them are in the US catalogs.  One of the non-catalogued models goes simply by the model number 66003-3.  The -3 signifies it has a stainless steel case.  So it's possible there's a -4 in a yellow case (gold filled, RGP or electroplate) or even a -1 or -2 in solid gold.

Taking a look at my project watch, you can tell that something is amiss.  You can also easily identify it as a post 1969 model because it says "Selfwinding" and it has a day of the week complication.  Neither of those attributes occurred prior to 1970. 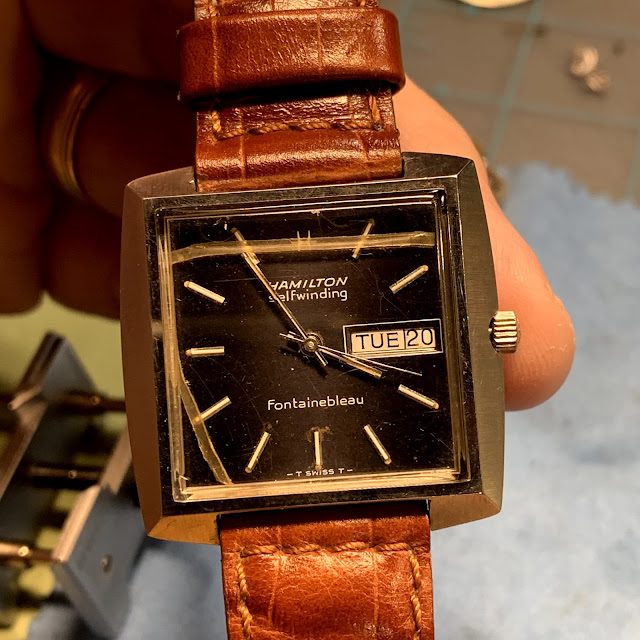 The back of the watch clearly shows the model number and this case is similar in design to the 1969 Odyssey and the Fountainebleu I recently did.  It is a challenging case design to open and an even more challenging case to close.  The back fits inside the front bezel and a ring compresses the back, dial, crystal and a gasket together as an assembly like a sandwich.

I know someone has been inside this watch before me because the back ring isn't seated properly.  Notice the round section over the strap... that should be flat.  The watch is not running but what I don't know is why... is it dirty or did someone goof it up? 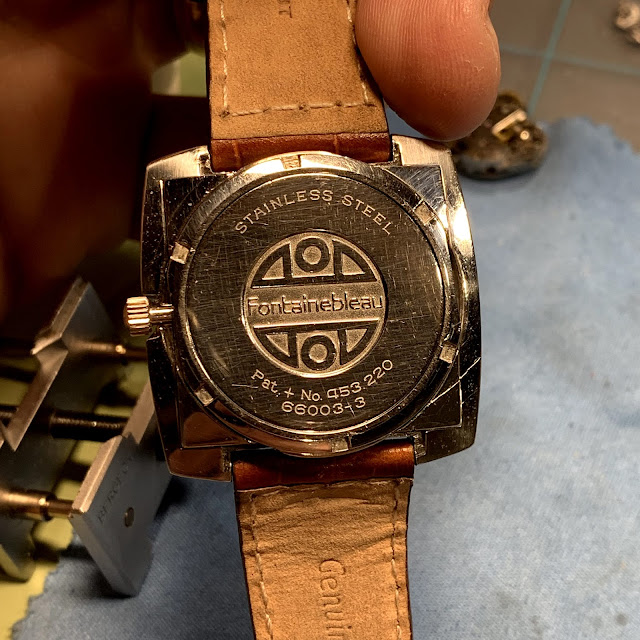 As I said above, the movement and dial are held inside the case back and the crystal and a specially formed gasket are sandwiched between the bezel and the case back.  Only half of the gasket remains.  The movement will come out once I separate the two-piece stem and pull the crown out. 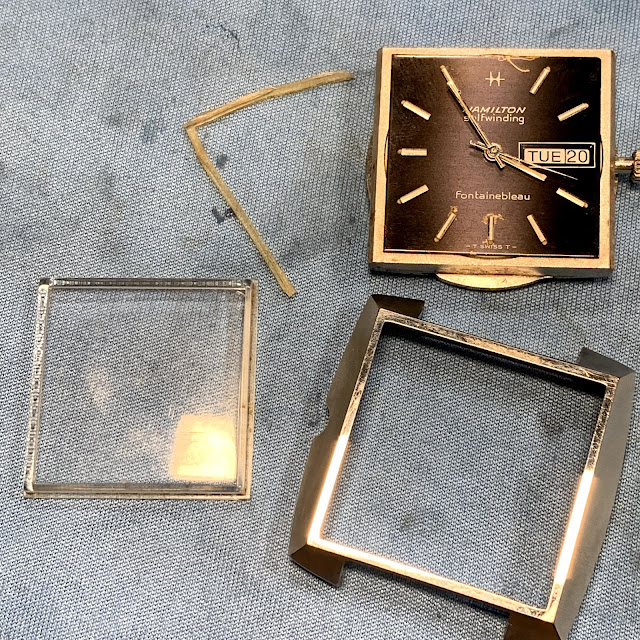 Here's a shot of the caliber 66 movement inside.  This movement is used in a few of the 1970's Day-n-Date models and it's based on an A Schild 1876 ebauche.  It has a 21,600 beat per hour rate or 6 ticks per second.  If you have a good eye you'll notice there's a barrel bridge screw missing (the barrel is under the oscillating weight though). 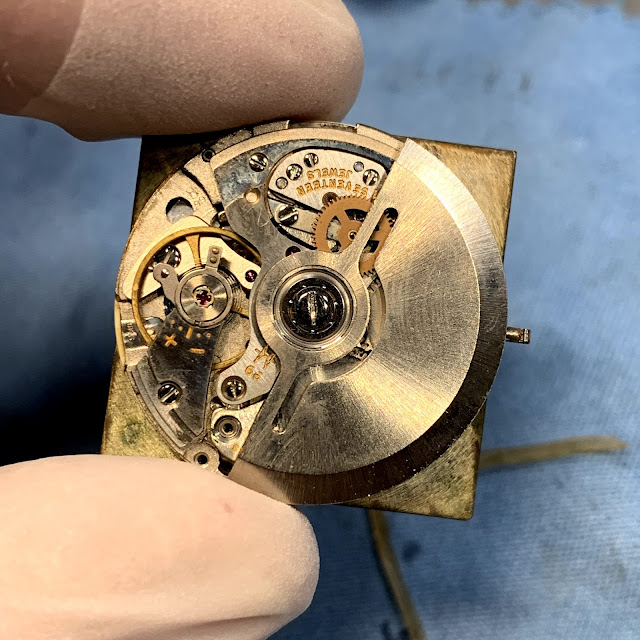 With the weight moved, the ratchet wheel over the barrel is visible and notice the arbor screw is also broken.  Typically I can use a needle to pick the remaining portion of the screw out of the arbor so I can install a replacement. 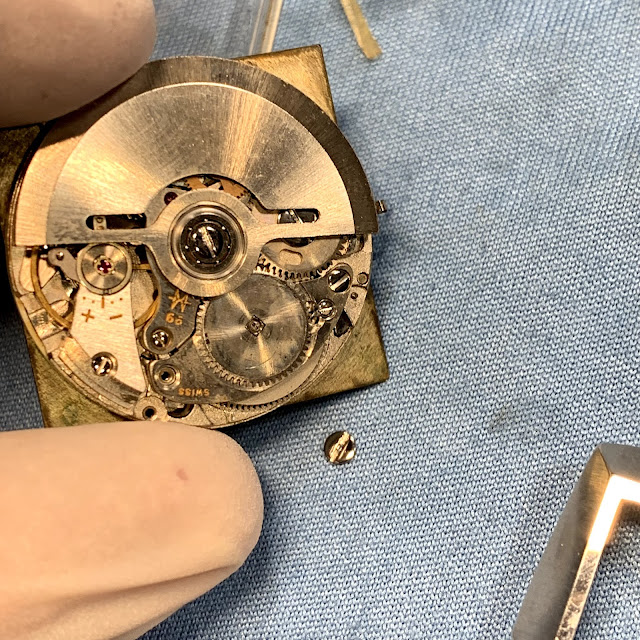 Both of the dial foot screws are a tad rusty - probably due to moisture getting past the crystal. 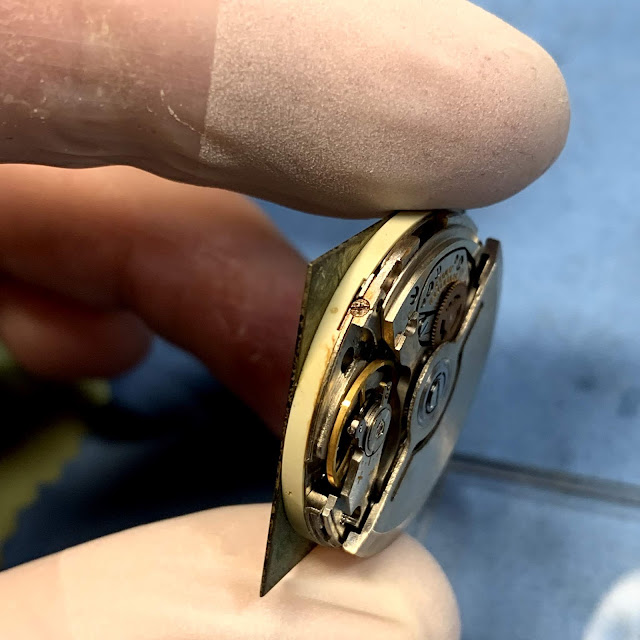 I removed the day wheel so I could get an idea of the parts that make up the day and date complications.  There is one pesky index spring under the bridge that will fly off if I'm not careful.  You can just see the tip of it by the number 6.  So I'll listen to the little voice in my head and move to my light tent so I will be able to find it when it inevitably disappears. 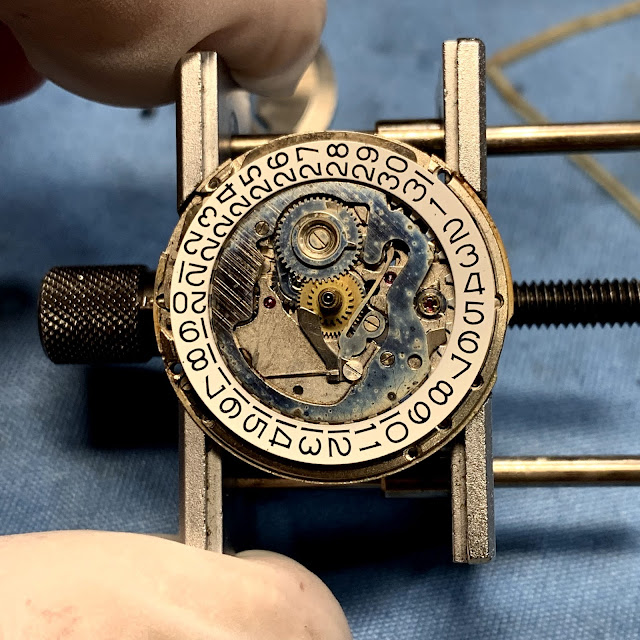 Now you can see index spring next to the 6.... no sudden movements or I'll spend the next 30 minutes on my hands and knees looking for the darned thing. 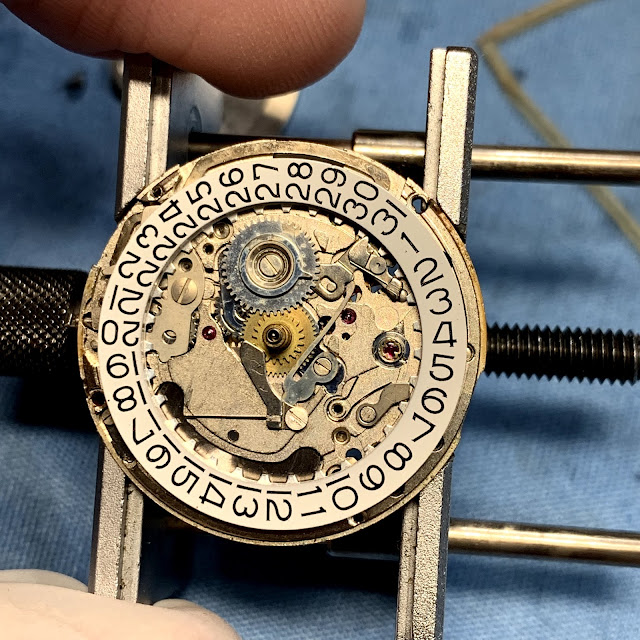 Slowly the front of the mainplate is cleared of parts. 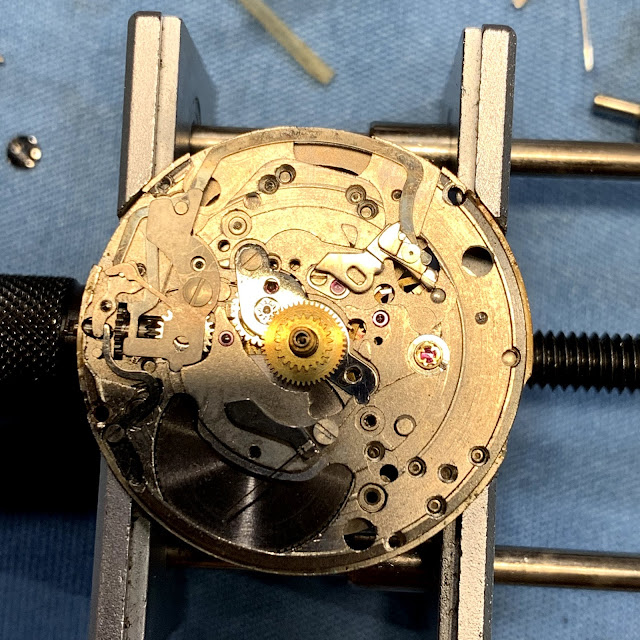 Turning my attention to the back, it's always good to have a photo of the train wheels to refer to when reassembling the movement. 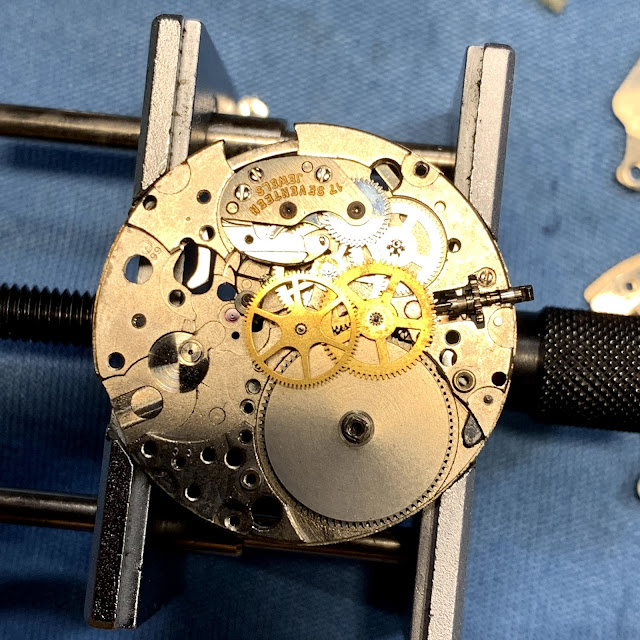 Uh oh... close inspection of the barrel shows that two teeth are buggered up.  You can see them below at about 4 o'clock.  I'll try to clear them a little but the watch may stop when the barrel turns to engage these teeth.  The barrel should be replaced but I don't have a replacement at the moment. 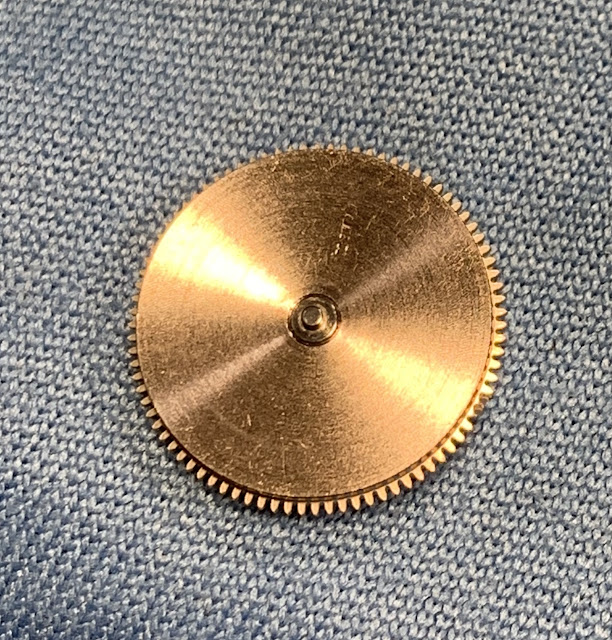 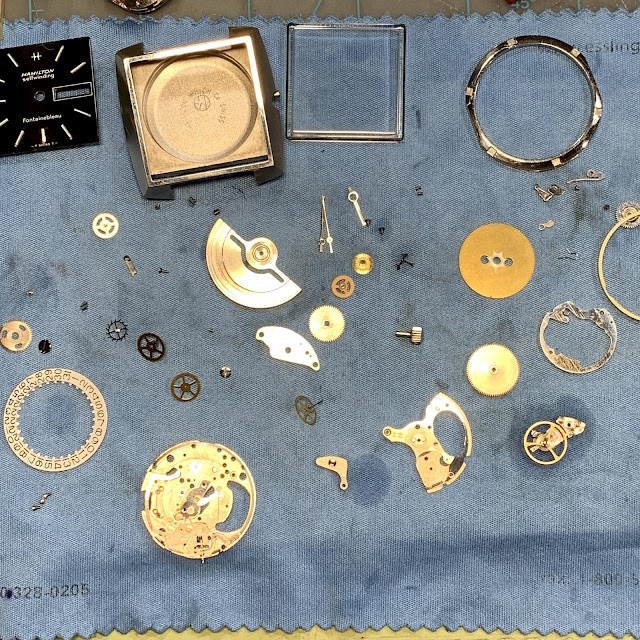 The reassembled movement is now ticking away but I haven't wound it very much.  I managed to find the missing bridge screw inside the movement when I disassembled it. 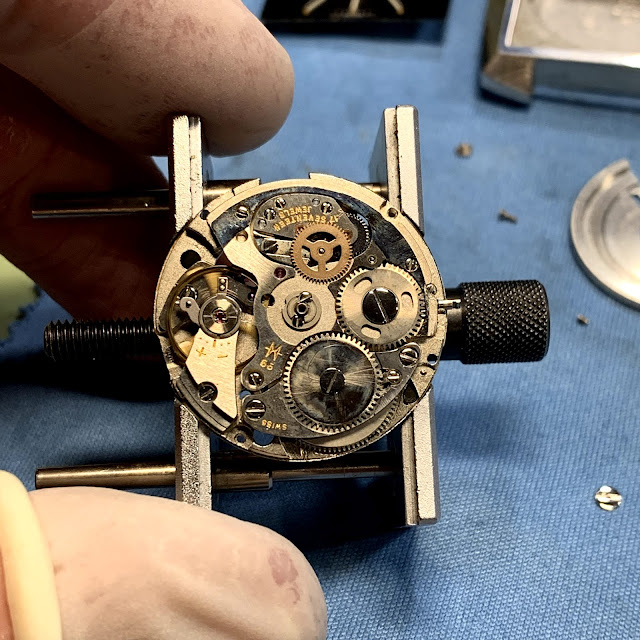 Things look promising... the amplitude should come up once I wind the mainspring more fully. 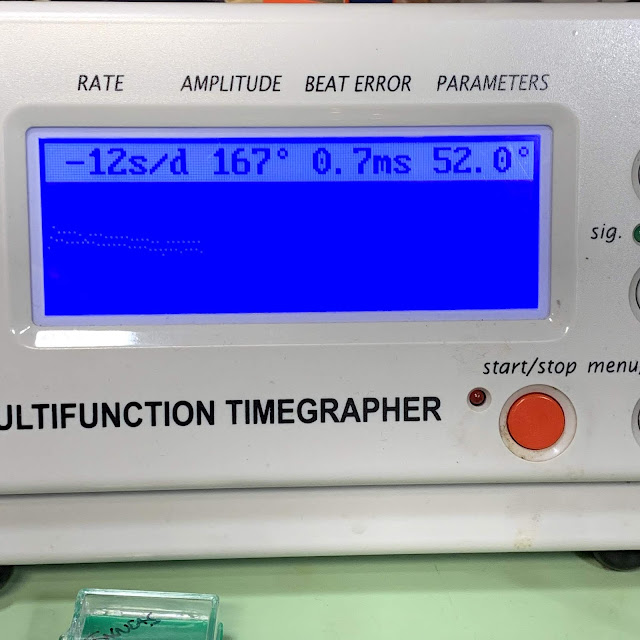 I was able to clear off the old fingerprints on the dial but it's still not perfect.  I'm not sure if there's a scratch by the H or if its dried gunk.  There's more gunk by the 6 marker but I'll let sleeping dogs lie and avoid making things worse. 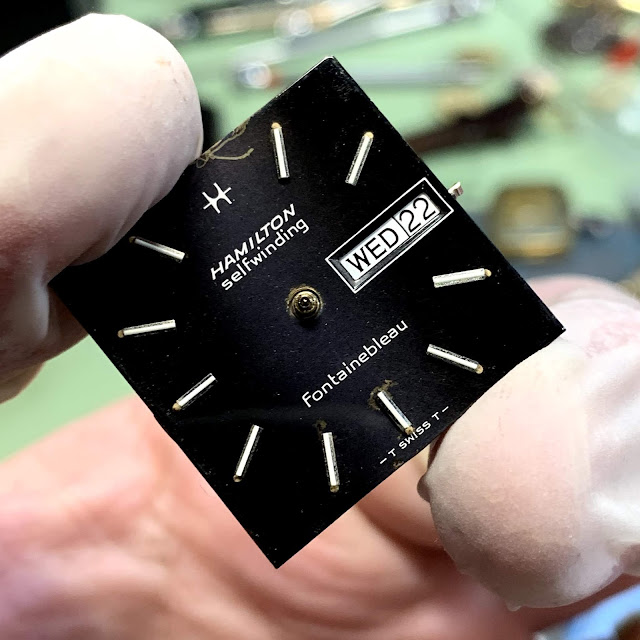 The oscillating weight goes on the back and I'm just about ready to reinstall the movement in the case back. 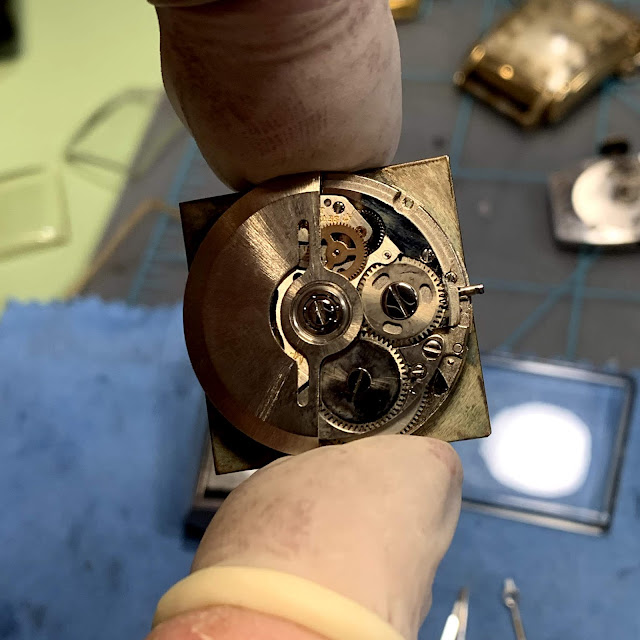 I polished the crystal as best I could but didn't want to over due it.  I'll put a thin o-ring on the crystal to try to take up some of the space that the proper gasket would have filled.  I doubt it will provide much of a seal but it should keep things from rattling inside.  You should keep vintage watches away from all moisture anyway, even it you think they're "waterproof". 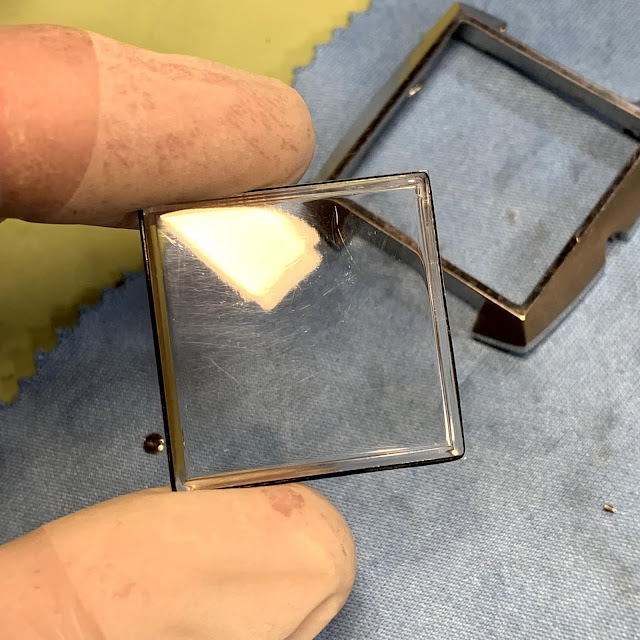 Once the crown is installed I can advance the time until the day and date changes.  This movement has a quick set function for the date - you push the stem in.  The day of the week is a little more cumbersome to set. 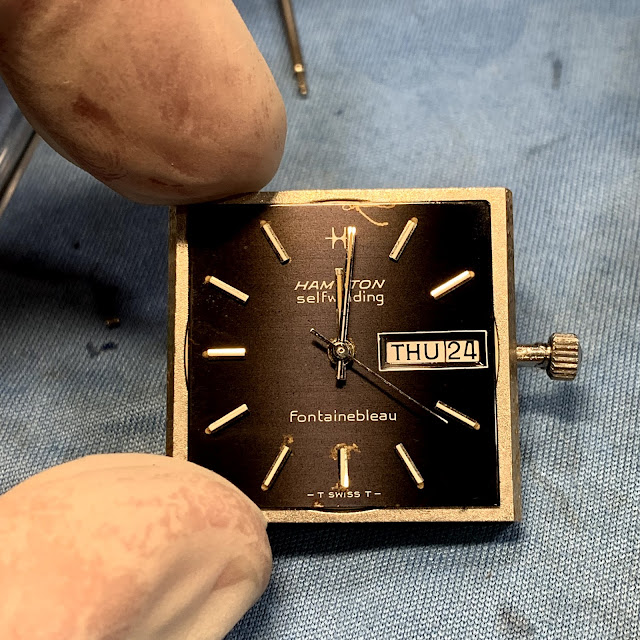 I can use the crown to wind the watch more fully and the amplitude came up over 200.  I'm happy with that considering the barrel needs to be replaced anyway.  Otherwise the specs look good to me. 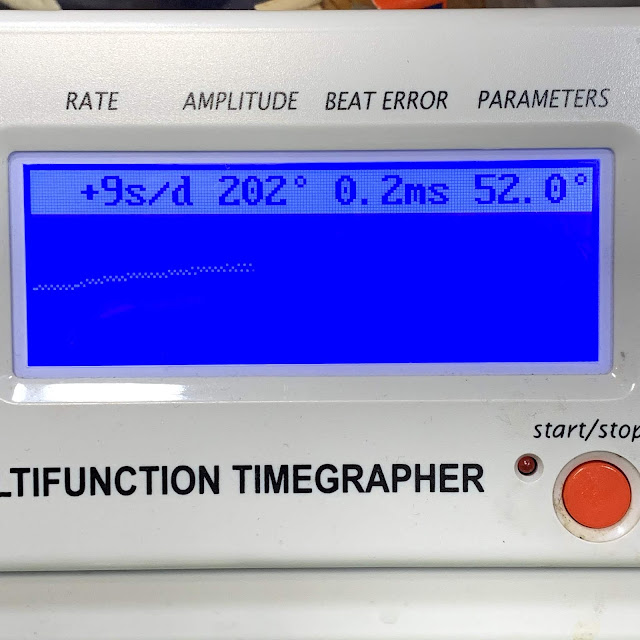 This watch looks a lot better, especially since the remnant of the gasket is no longer stuck inside.  Time will tell, literally, if the barrel causes a problem.  I have no doubt the watch will work until the missing teeth rotate into the center wheel.  I suspect the barrel will slip until the next tooth engages but I'll find out in an hour or two. 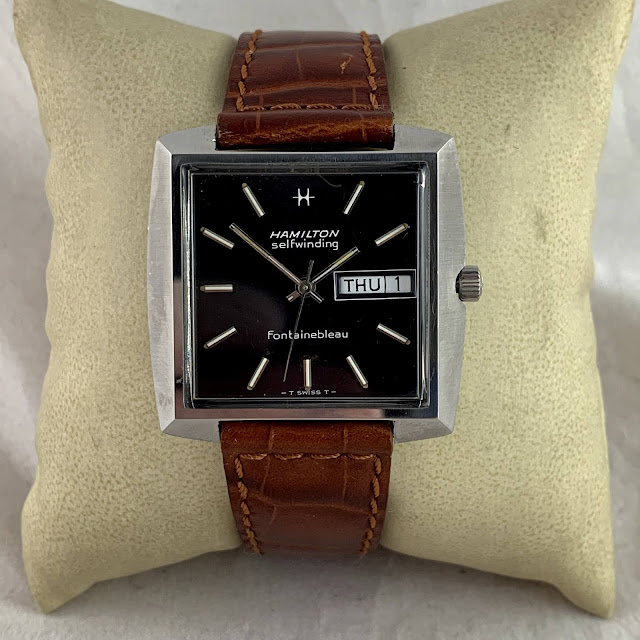