In 1931 Hamilton introduced a variety of new watches to replace the lineup of geometrics from the late 1920's.  One of the new models was the Square B.  Although similar to the 1927 Square Cut Corner, the Square B had an entirely different bezel shape and the crystal was rectangular. 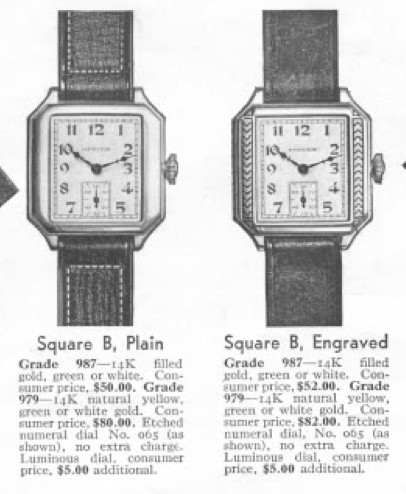 The Square B came in two varieties... Plain and Engraved.  Personally I find the Plain to be aptly named as it really doesn't do much for me.  The Engraved version is much nicer in my opinion.  Some folks have mentioned it as Hamilton's first asymmetrical but I guess the Spur would have that honor.

The Square B came in yellow, green and white gold as well as gold filled.  The solid gold watches got the 6/0, 19 jewel 979-F movement while the filled gold variety received the 17 jewel 987 movement.

I recently had the opportunity to snag an etched dial variety in a green filled case.  It was a little bit of a longshot - I only had one photo to go with. 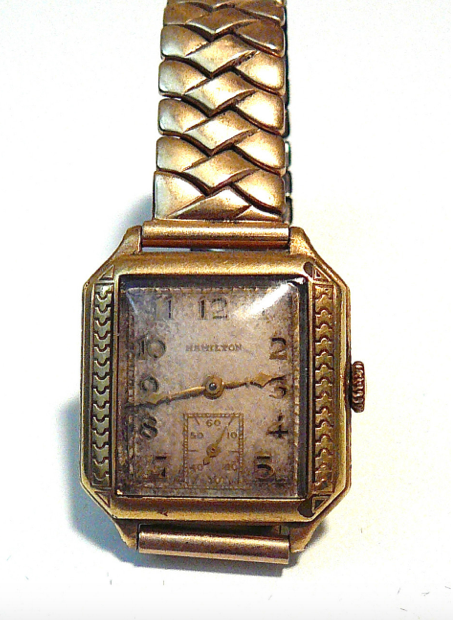 As received it was in pretty good shape.  Definitely in need of some cleaning and a new crystal.  Here's a shot of it after a little cleanup to the case. 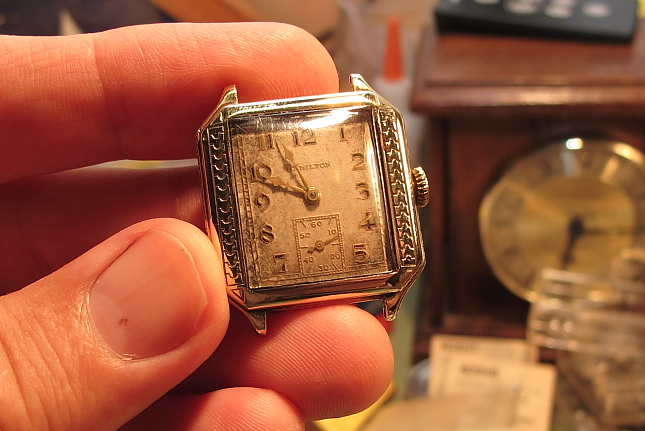 The etched dial is very interesting I think.  There are some black enamel highlights to the numbers, much of which has been lost to time.  If I had a really steady hand I would be tempted to redo some of it.  But I decided to let it be and just gave the dial a very gentle cleaning. 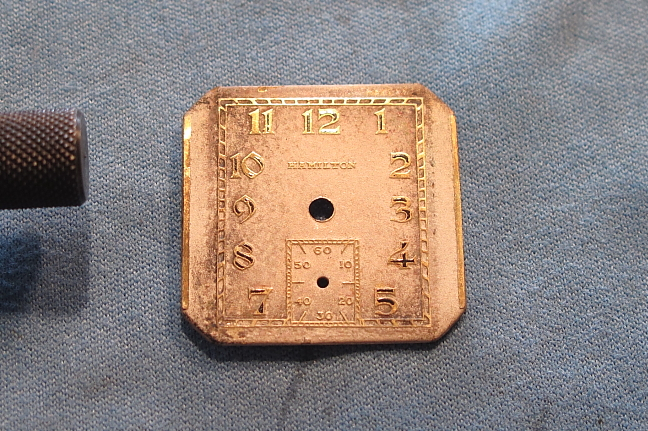 The 987-F movement was in decent shape, just a little dusty.  The F is for Friction as the jewels in the F movement are pressed in place and held by friction and not by little screws as in the regular 987 movement. 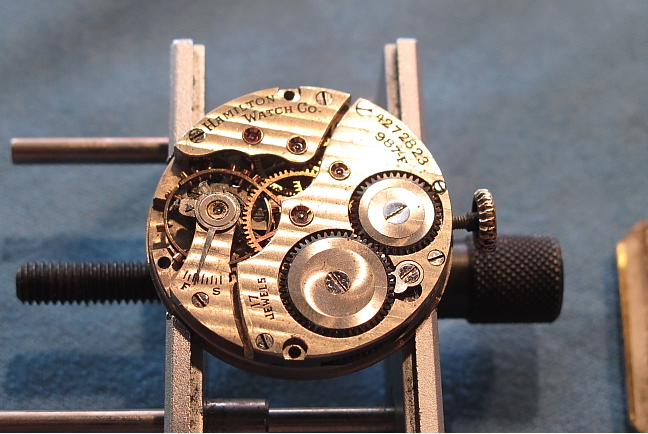 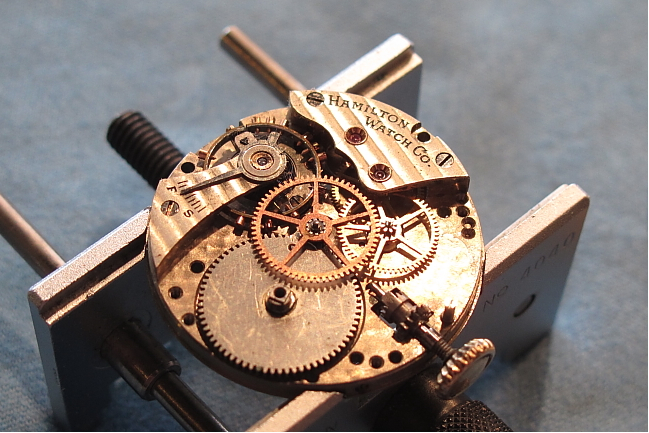 Next to come off is the train bridge to reveal the fourth wheel and the escape wheel (with the saw-tooth like appendages). 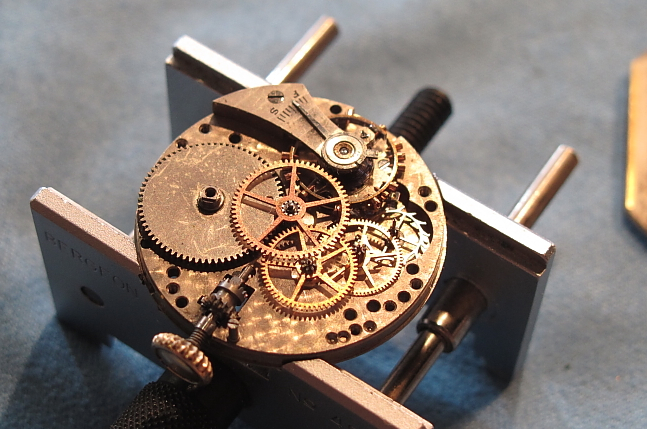 Everything just slips right out at this point, leaving the balance assembly and the pallet fork beneath it. 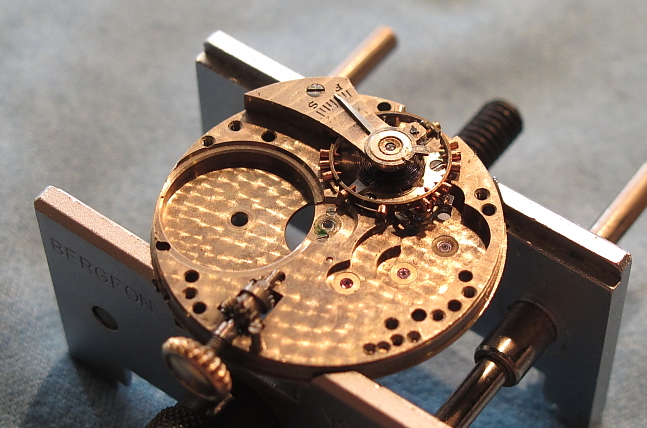 With the balance removed all that's left is the pallet fork held in place by it's bridge. 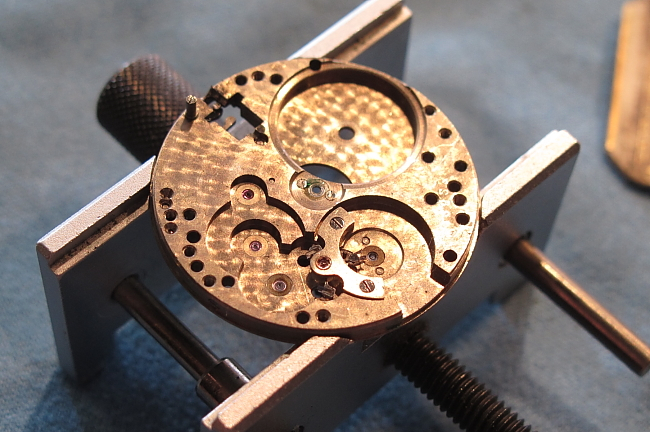 While everything cleans I get a new glass crystal ready for final shaping and installation in the bezel.  Shaping glass crystals with 600 grit sandpaper can take up to 20 to 30 minutes sometimes but getting it to fit just right is important. 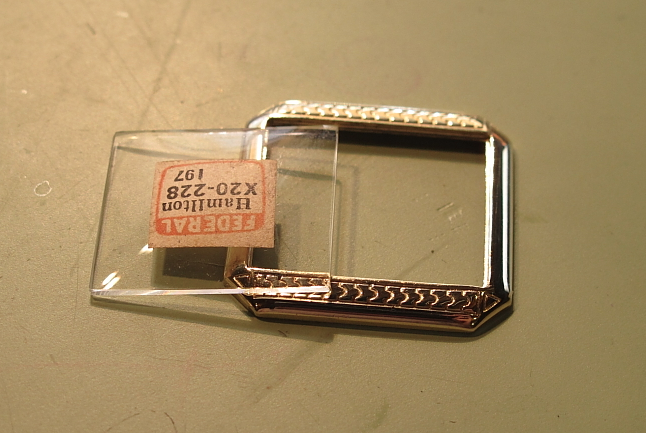 Everything is dried and laid out for assembly, including a new mainspring. 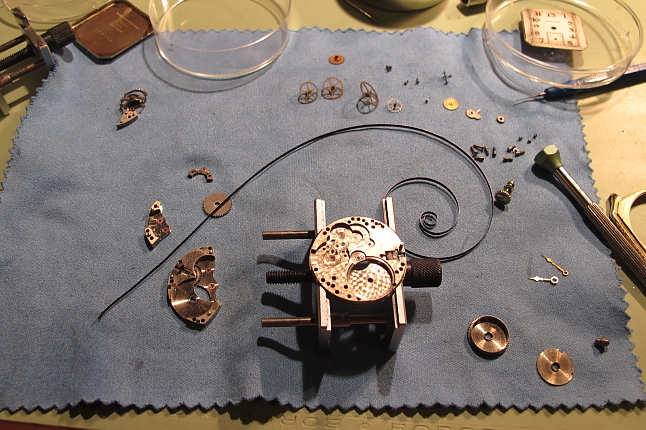 Here the mainspring is tucked safely into it's barrel and the arbor is installed.  A fresh coat of lubricating grease will keep it happy for years to come. 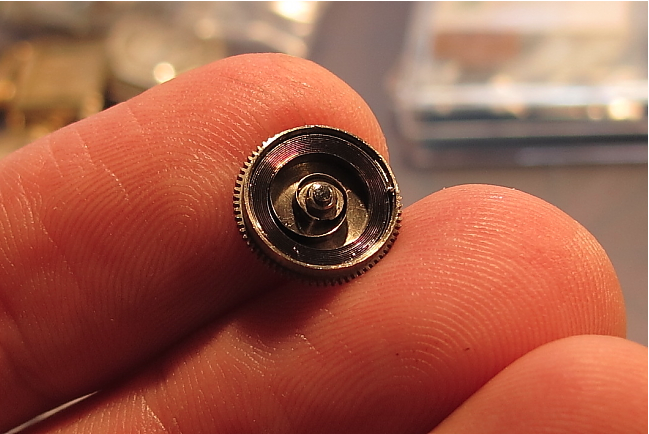 Well, putting it all back together is pretty much the same as the above, but in reverse order.  The only difference is I like to put the balance on last.

I re-enameled the engravings on the case and installed a new lizard strap in brown.  This is a nice looking watch and it is definitely ready for some wrist time. 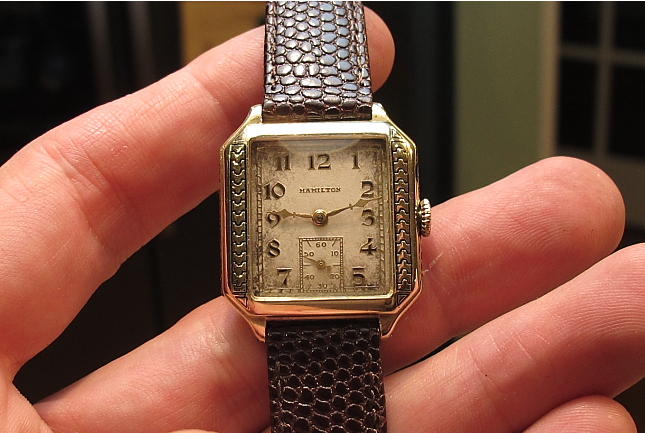 Here's a wrist shot of another Square B Engraved I recently restored... this one with a luminous dial.  I sent this to an appreciative buddy in Australia, or Africa, or where ever he may be.  I still miss it... sob sob. 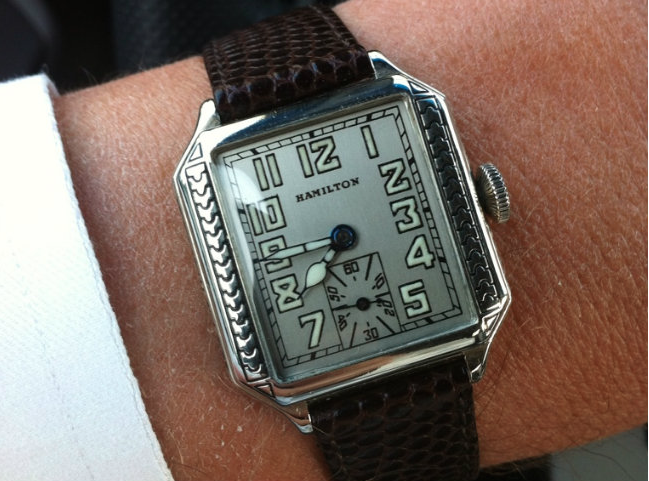 And just for reference, here's a decent shot of a Square B Plain courtesy of Tom Diss ... note that it's pretty plain. 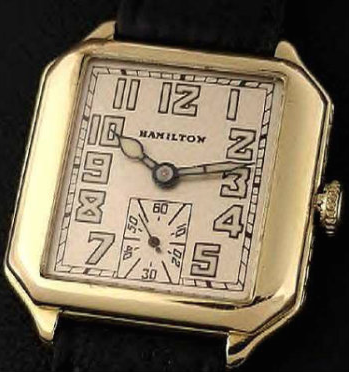