It's time to celebrate!  This is my 200th blog post.  To be honest, I'm surprised I've made it this far without running out of steam.

But, as Monty Python would say, "And now for something completely different".

My latest project is probably a little controversial.  I've always thought it would be interesting to convert a pocket watch to a wrist watch.  Specifically one of Hamilton's 10 size movements.

What makes it controversial is from a purist's perspective this is purposely creating a franken.  In addition, pocket watches aren't designed for the rigors of wrist-wear.  They were designed for being vertical and somewhat protected in a pocket.  The main concern is the larger mass of the balance wheel and the non-shock protected balance staff pivots.

So, let me first start off by saying that no watches were irreparably harmed in this conversion.  What has been done can be easily undone.

The first step is to decide what movement to use.  Hamilton's 10 size movements start with the 17 jewel 917, the 21 jewel 921, the 23 jewel 923 or the 23 jewel 945.  They are all the same size but they vary based on the jewel count (obviously) as well as the decorative aesthetics.  Generally speaking, the higher the jewel count, the higher quality the movement grade.  All of Hamilton's watches had a minimum of 17 jewels so even the most basic grade was a very high quality movement.

I chose the 945 because my project watch has a display back and if I have the opportunity to enjoy seeing the movement, why not see the best one I can get?

Here's the pocket watch I started out with.  Obviously it's really nice already.  My picture doesn't do it justice. 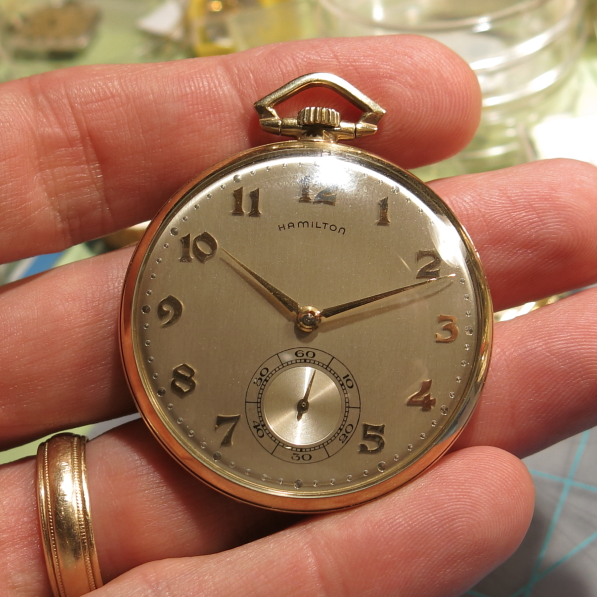 It's a presentation watch to a GM employee.  There's no date but I suspect it's from the 1960's. 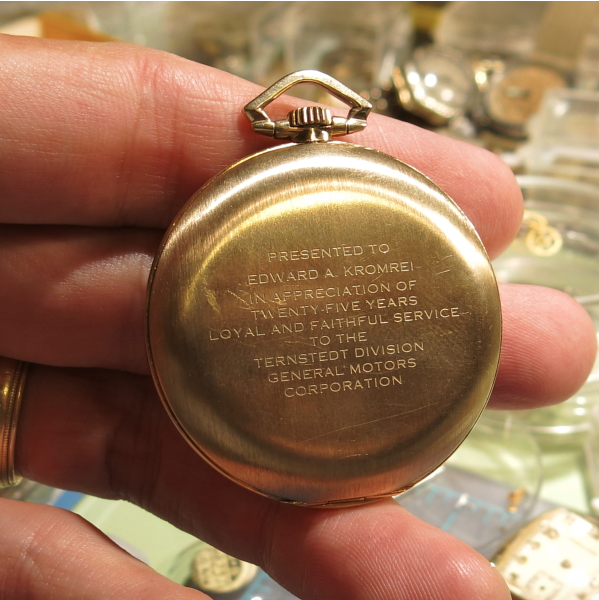 Here's the first glimpse of the movement that is protected under the back cover and the dust cover beneath that.  If you look closely, you'll see that something is missing.  There's no serial number on 945 movements.  So I can't use that to date the watch either. The movement comes out of the case just like a wrist watch... pull the stem and remove the two case screws and it comes out the front.

With the dial and hands removed you get to see what makes this a 23 jewel watch.  You can see three cap jewels covering the balance staff (top center), the pallet fork (middle) and the escape wheel (left).  In addition, the arbor for the mainspring barrel is also jeweled (below right) 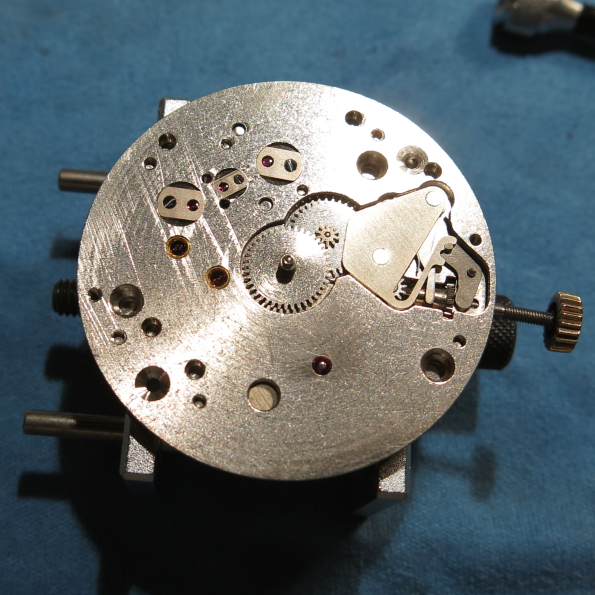 On the back of the movement, the mainspring ratchet wheel is jeweled (top right).  The escape wheel is cap jeweled (left) and under the balance wheel you can see the other side of the pallet fork is cap jeweled as well. 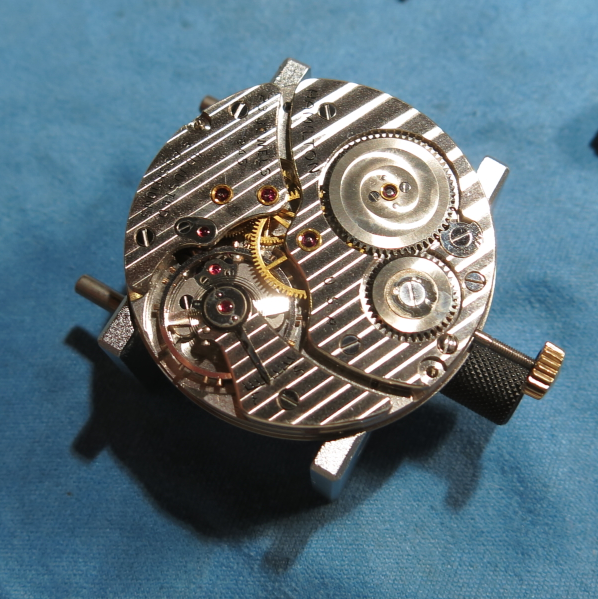 I won't go through the overhaul process for the movement since it's the same as any wrist watch, just the parts are a lot larger.

I cleaned and oiled the movement and then I installed it in my project case with a new dial with the stem at 3 (instead of the stem at 12 with a pocket watch).

I purchased the case, dial and new hands off of eBay from a supplier in China.

Everything fit nicely into the case using the movement ring supplied with the kit. 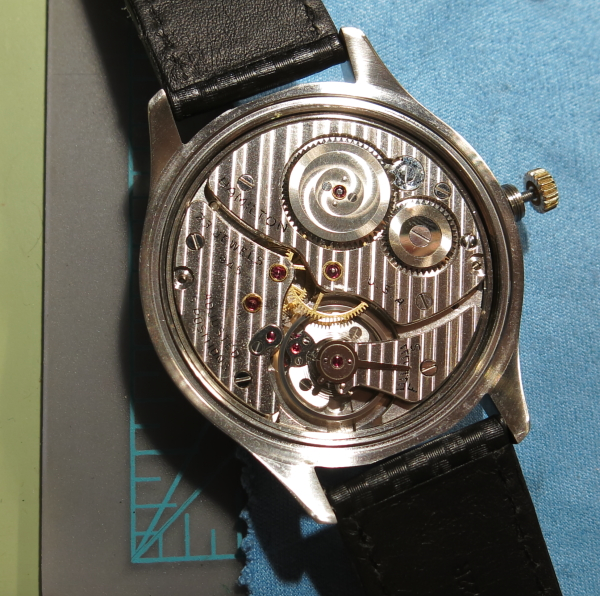 I had two problems with this project.  First, the crown that comes with the case isn't tapped to match the threads of a standard 917 watch.   I contacted the seller in Hong Kong and he's sending me a matching stem free of charge (that was really cool of him). Second, the hands I purchased weren't very high quality and the holes weren't quite the right size.  I broke one of them trying to open the holes a bit... my fault entirely.  Other than that it went together very nicely.

Here's a shot of the installed movement, purring away nicely beneath the glass display back. 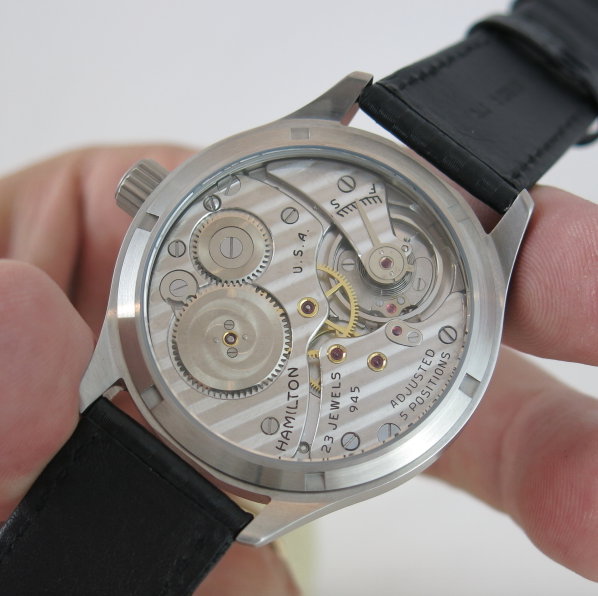 Here's the front, safely protected by a sapphire crystal.  I picked out the dial from my supplier in Hong Kong and I used some spare hands I had from a 917 movement. 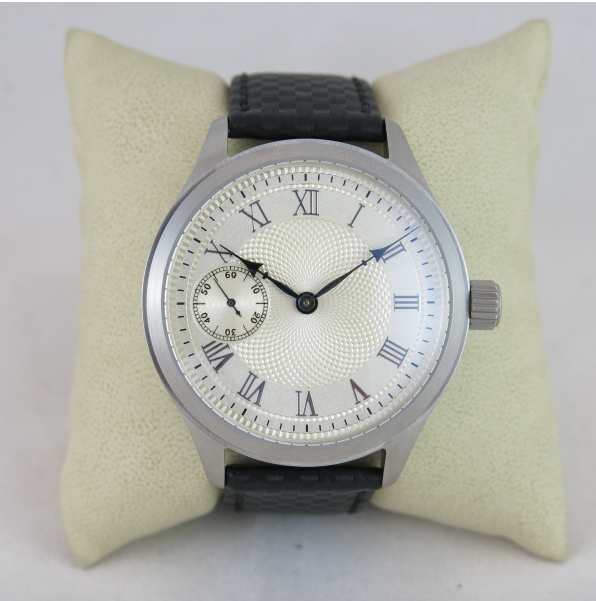 Here's another shot to showcase the engine turning of the dial.  You can see my hands have a little "age" to them in this shot. 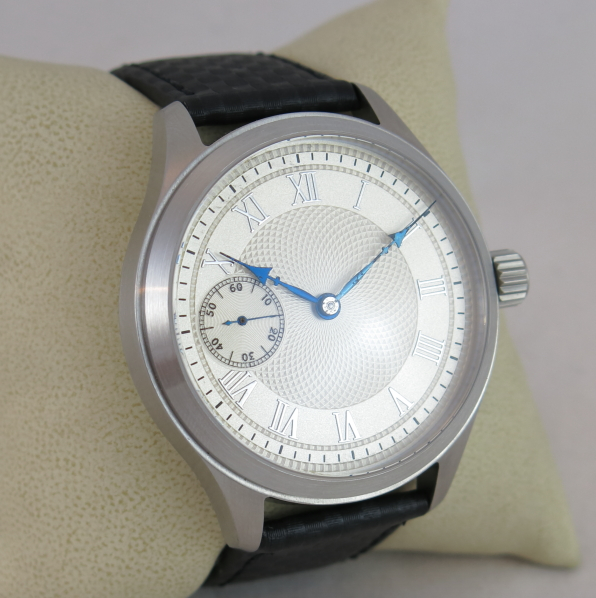 And finally, here's a wrist shot.  This is a BIG watch at 45mm wide.  I can't wait for my new stem to arrive so I can wear this watch more often! 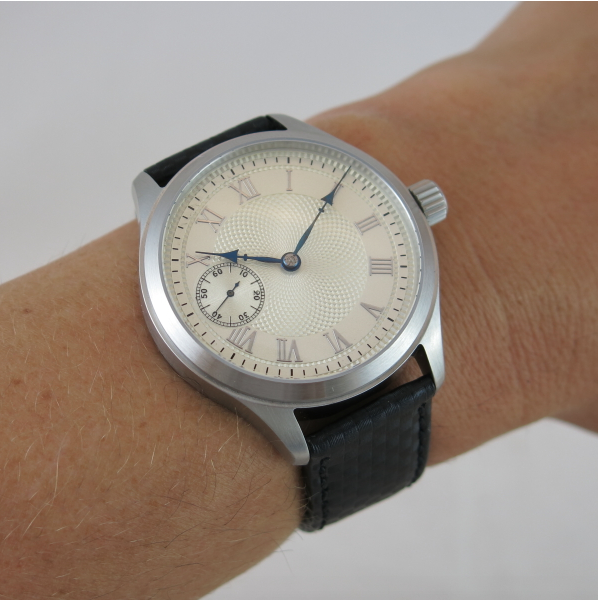 This was a great project - I'm generally pleased with the results.  The hands were a bummer and I wish I knew I needed a special stem but other than that this project was really fun!
Posted by HandyDan at 7:12 AM