The ages of most Hamilton pocket watch movements are easily identified by the serial number.  The only exception that I have found is the 17 jewel 912 movement.  For whatever reason, the resources that are publicly available don't have very good info on the 12 size 912 movement. 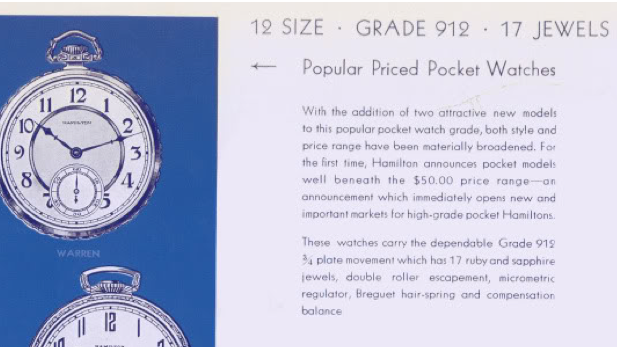 The 912 was the "entry level" Hamilton dress pocket watch.  It's a nice movement but they made so many of them that they're not really prized by collectors.  They're just too common.  However there are so many of them out there and so many different case, dial and hand options, that one could assemble an impressive collection if they really had an interest in doing so.

Hamilton named it's pocket watch cases (like wrist watches) but you could often select the dial and hands you wanted in the case.  Solid gold and gold filled cases were available, depending on the case style.

I recently purchased a 912 for reasons that will become more clear later.   I believe the case is a "Jefferson" - which is cool, because he is my favorite US President.  It's hard to say for sure but it's the closest match I could come up with based on the pendant and bow design.  Also, my watch is green gold filled, like the Jefferson. 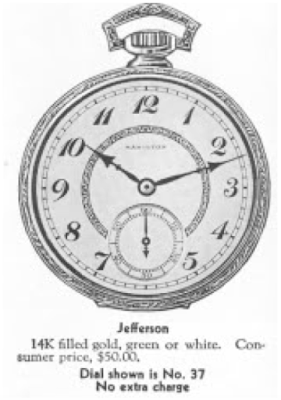 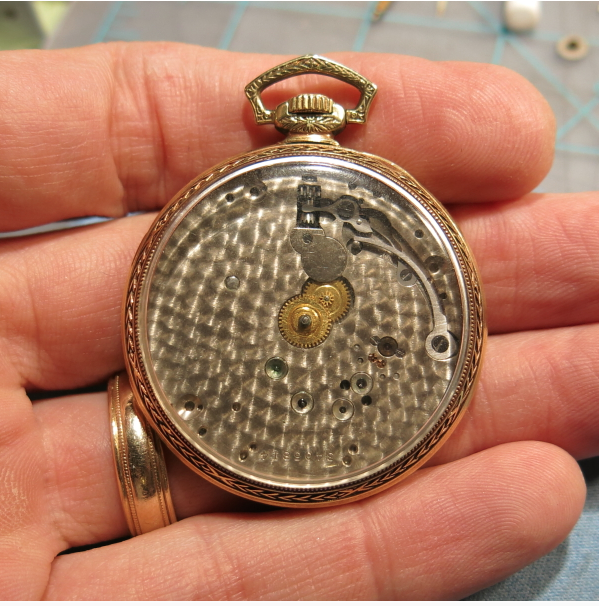 In order to get the movement out, the crown is pulled out to the setting position and the two case screws that secure the movement to the case are removed.  Then the movement will come out of the front (assuming the bezel is popped off first). 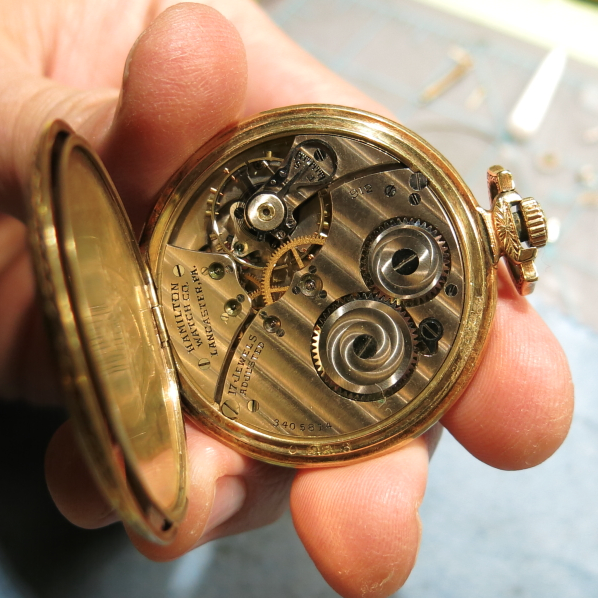 With the mainspring let out, everything is disassembled and cleaned in the ultrasonic.  I'm also replacing the plastic crystal with a glass version. 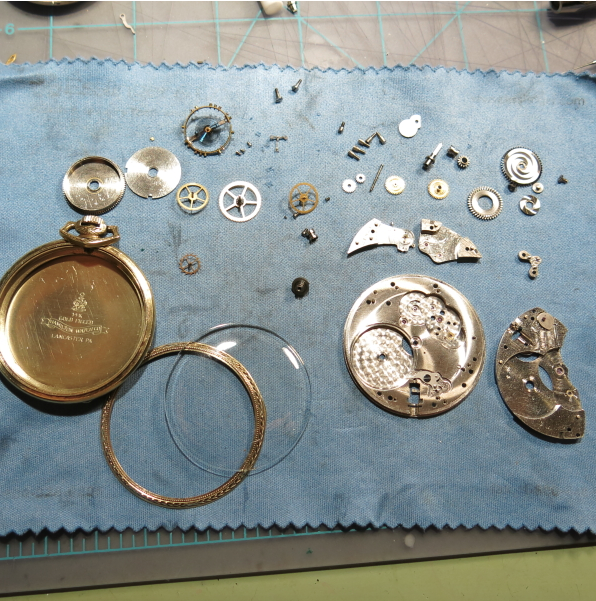 The mainspring was "set" (below) so that will be replaced by a fresh one. 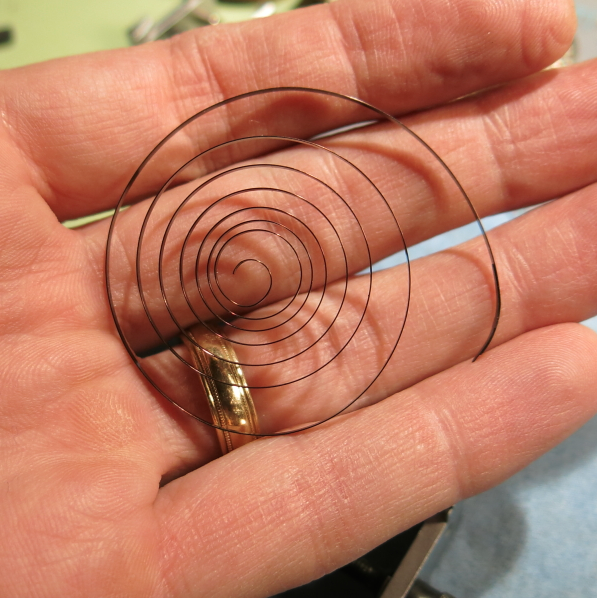 With the help of my larger mainspring winder, installing a new mainspring was a breeze.  I'll have to rebend the center to latch onto the arbor so that it will catch and wind. 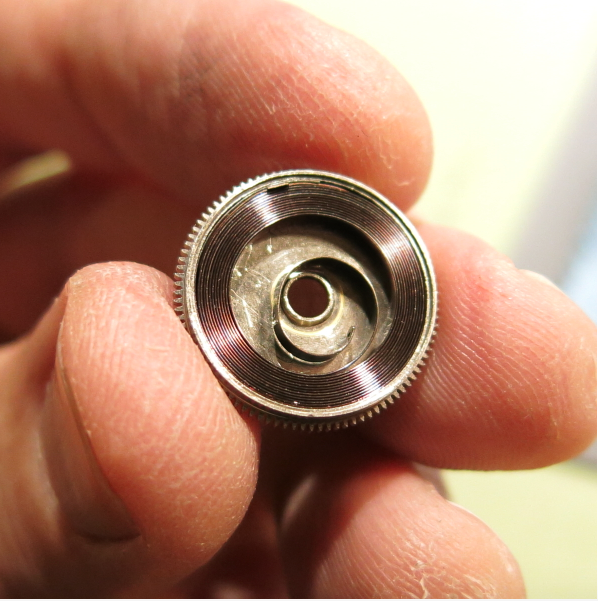 The first thing to be reassembled is the keyless works.  This assembly of four pieces is what engages the stem and puts the watch in either the winding mode or the setting mode. 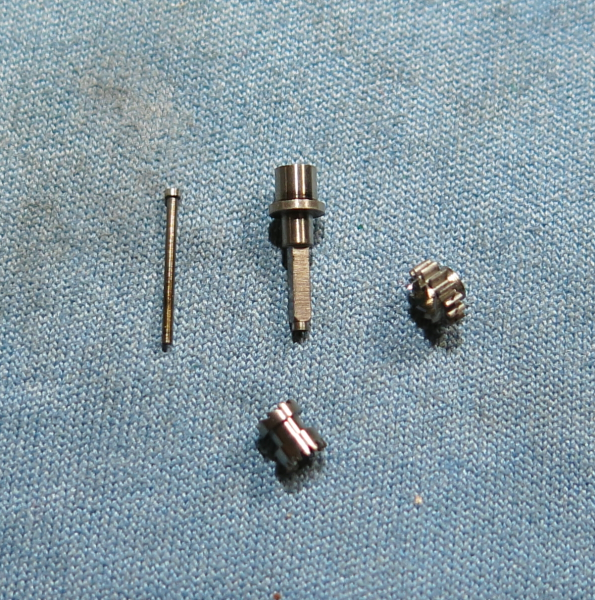 The rod goes down the center.  And the larger wheel is called the winding pinion.  The smaller part is the clutch and it slides back and forth depending on which mode the watch is in… winding or setting. 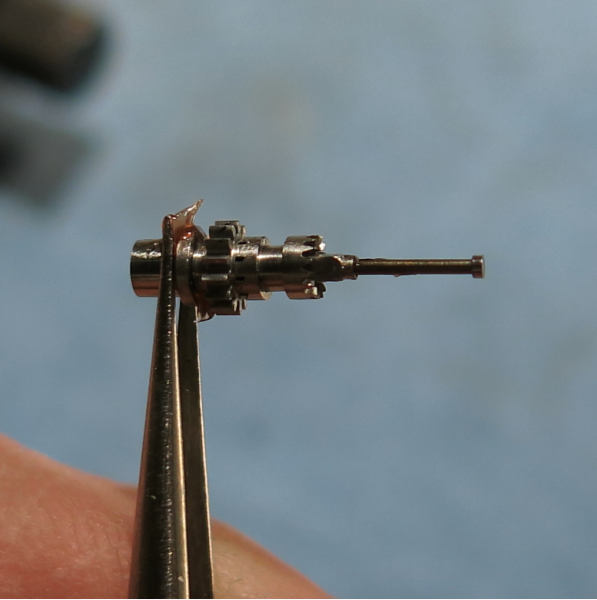 Here it is in place, along with some grease.  The movement is "negative set" so when it's at rest, the springs inside keep the parts in the time setting position.  That's why the clutch (below) is off to the left, toward the center of the watch. 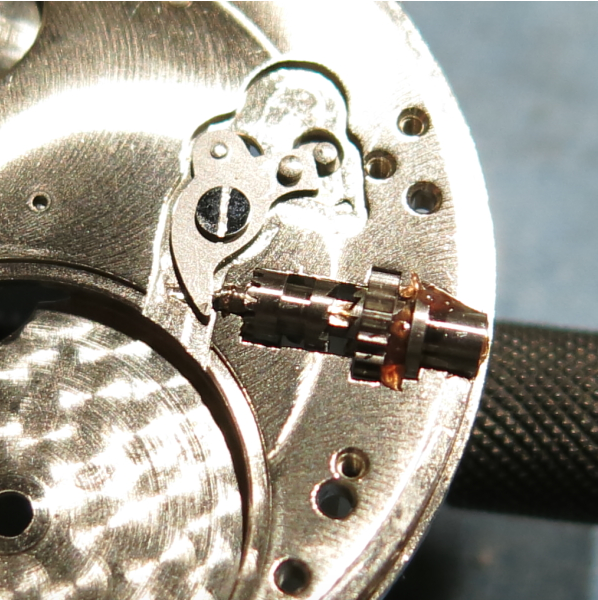 With the keyless works in place, the next item on is the pallet fork.  It's a little anchor-shaped part that releases the energy stored in the gear train when the balance moves it.  It's what makes the tic-tock sound you hear. 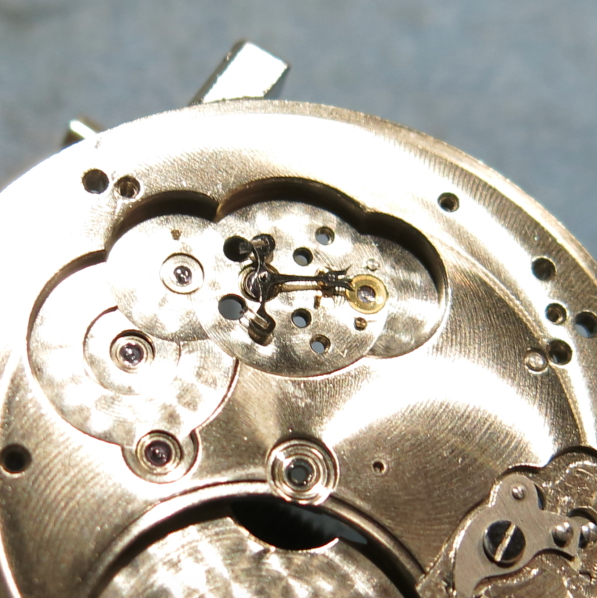 With the pallet fork installed beneath it's bridge, the escape wheel and fourth wheel go on next.  Tweezer access from this side allows me to align each wheel's pivot with it's corresponding jewel in the train bridge. 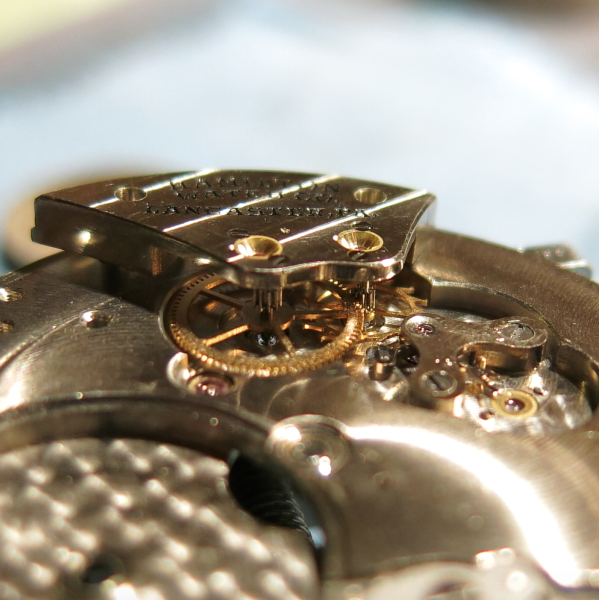 Next to be installed is the third wheel, center wheel and the mainspring barrel.  These will be covered by the barrel bridge, as well the as keyless works. 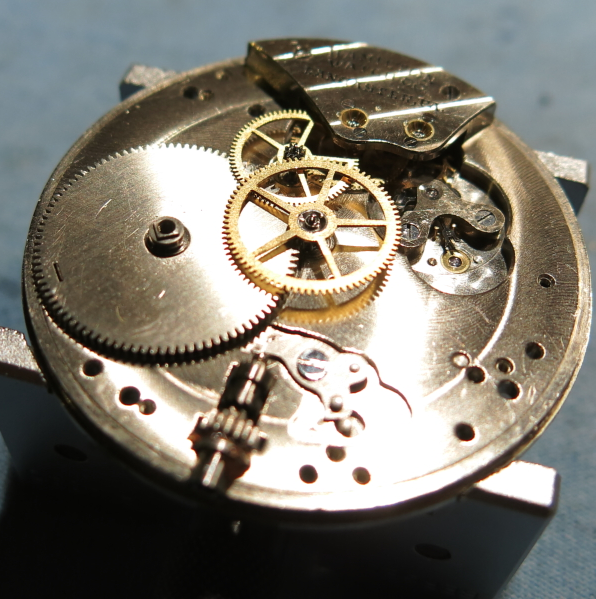 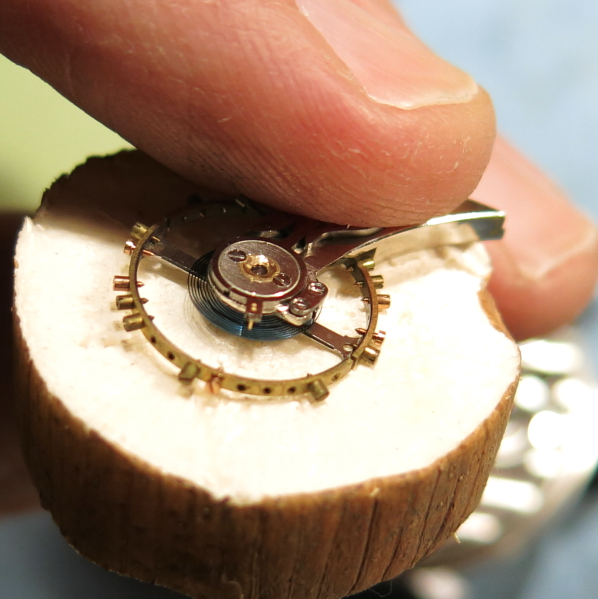 A couple of turns to the mainspring stores some power in the gear train.  That way when I install the balance assembly, the watch will come back to life if everything is lined up… which it is, below. 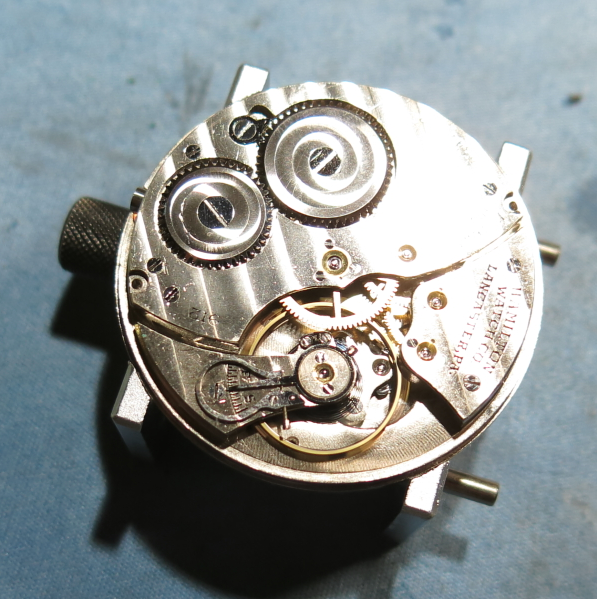 In order to wind the watch more fully, I need to reinstall it into the case so I can use the crown.  Without a dial installed you can see the clutch is in the time setting position. When I push the crown in (below) the clutch moves over to the right and engages the winding pinion for winding mode. 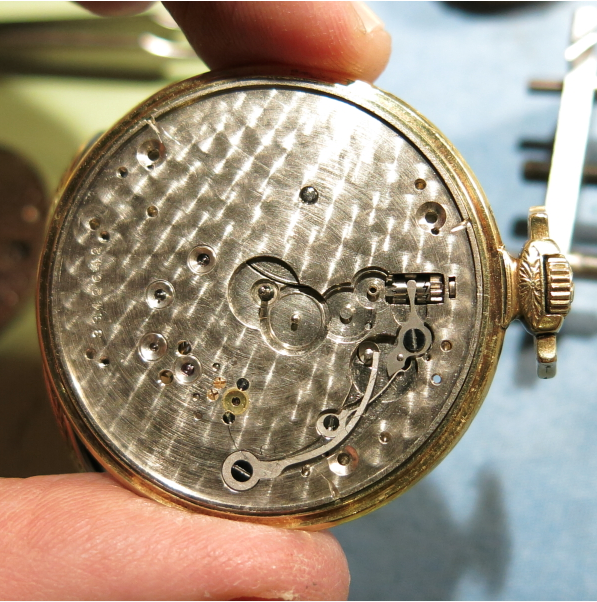 With a full wind, the watch goes onto the timer.  It's running a smidge fast with good amplitude.  The beat error is "fair".  I can slow the watch down slightly with the regulator. 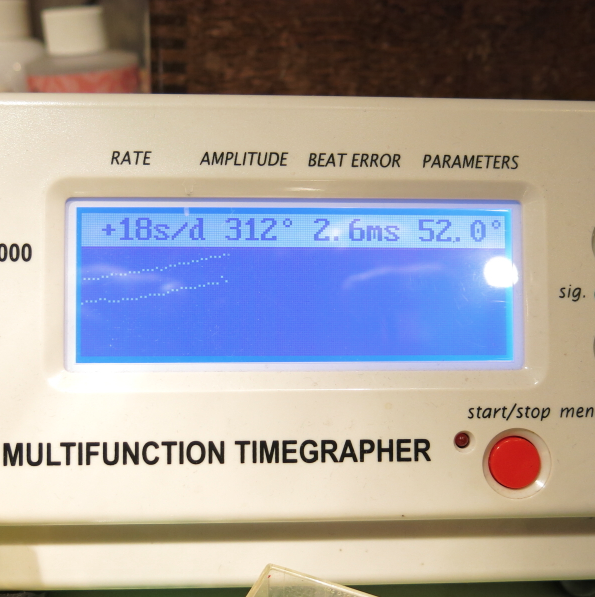 With the watch timed, the dial and hands go back on and it's back into the case for this movement. 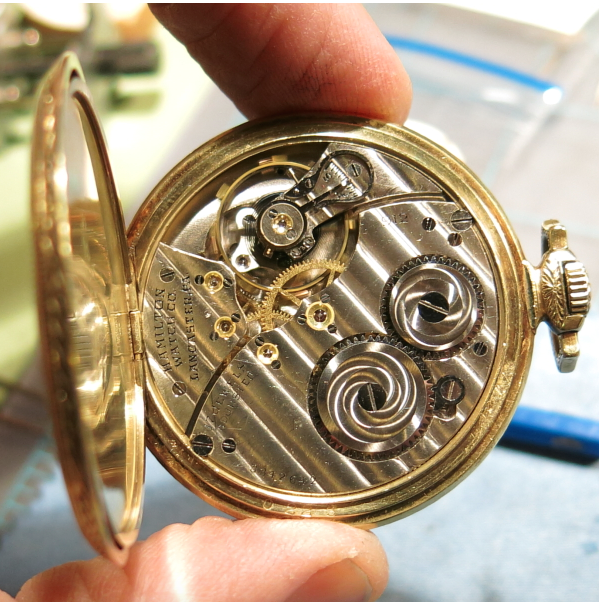 And here's the finished product.  As you can tell from the dial - this is a great watch for a former naval officer like myself.  That's the reason I purchased this watch - I love this dial.  I've seen similar dials with "United States Coast Guard" across the top - very cool (if you're a Coastie - ha ha!). 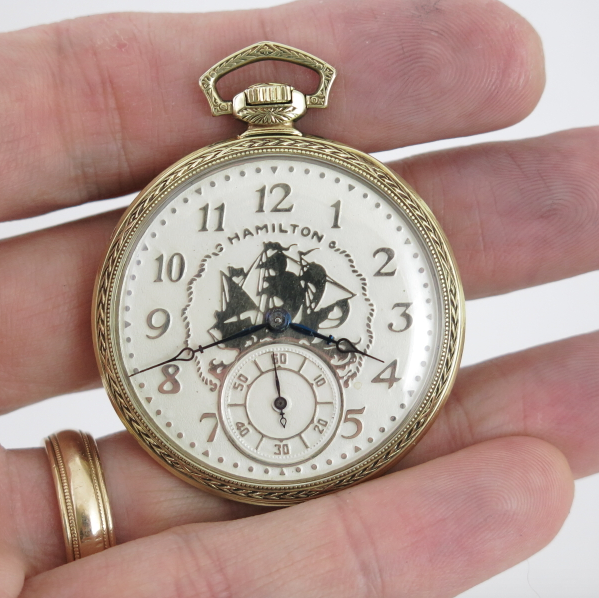 The dial is a No. 46 etched dial with raised gold numerals. 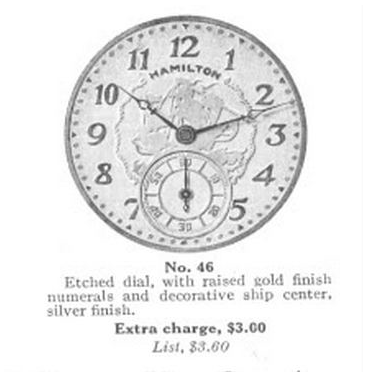 This watch was engraved as a gift from "Grandmother" in 1933.  Sounds like a rather formal relationship to me… how about Grandma, Grannie?  Not in this case, apparantly.  Still, I bet "Grandmother" was very proud of her grandson when she gave him this. 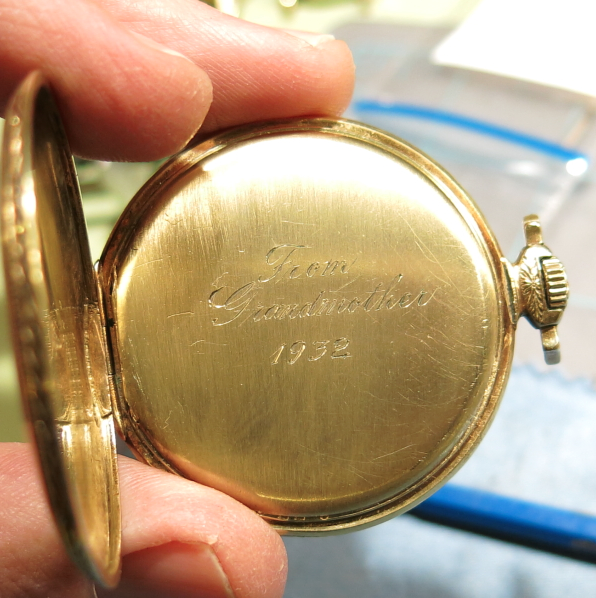 The back of the case is very nice too with a single initial engraved. 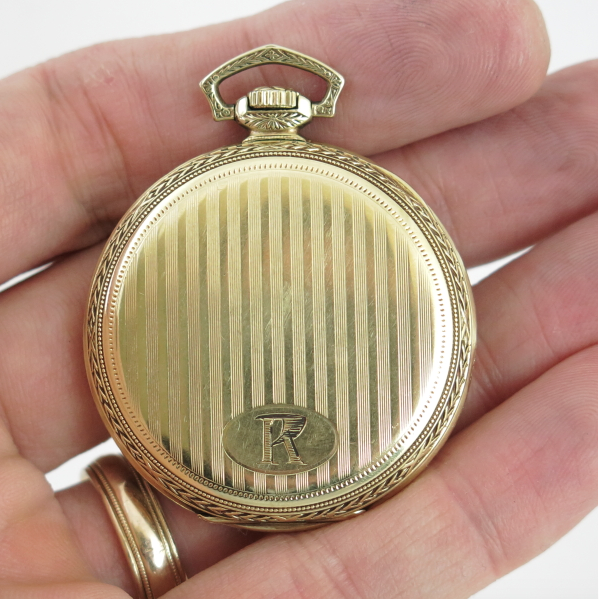 It's a fine watch in excellent shape.  What more could a collector wish for?
Posted by HandyDan at 2:08 PM