It's funny how some watches are abundantly found and some are very hard to come by.  Obviously popularity at the time of release and the number of years a watch was produced are major factors.   And, of course, there are a number of situations where very few examples were made to begin with.   I think another important factor is the quality of the case - I bet a lot of nice watches have been lost to time by wearing out the case.

Take for example the 1935 Turner.  It was produced for two years.  There were over 6,100 yellow gold  filled models and only 420 white examples, according to Rene Rondeau's great reference book.  I can understand not seeing any white Turners - but yellow ones are pretty darned scarce too.

The Turner came in a 10K gold filled case - and one of the interesting things about the case is it doesn't say Hamilton inside it.  It's made by Keystone and is marked 10K gold filled.  If you didn't know better,  you might suspect that it's a jobber case but it's not.

Turners are notoriously prone to wear through on the high points - so I think that's one reason they are hard to come by - I bet a lot of cases were worn through and discarded.

Three dials were available… an applied gold marker dial, a black enamel numeral dial (1936), and a combination black marker / numeral dial (1935).  The latter is especially interesting since it's quite unusual.

I've been on the prowl for a Turner for ever, basically.  Having a 6/0 sized movement, it's actually a nice sized watch, even by today's standards.  As fate would have it, I purchased a project watch example that was for sale from another collector.  In fact, check out his vintage watches for sale on his site… waterstonewatches.com

As received, the watch had the usual dirt and grime one expects to see on an 80 year old watch.  The crystal was plenty scratched, but the bezel was largely wear-free. 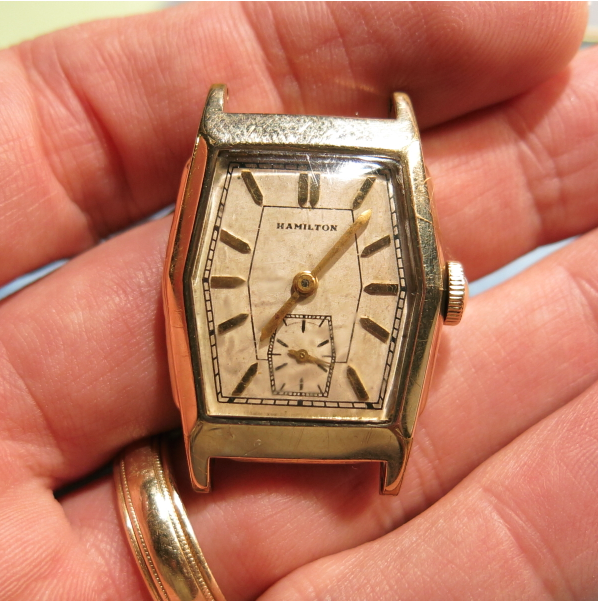 The case back has some wear to the opening lip and a minor dent on the left side but is otherwise tight. The bezel and the back needed a little tweaking to get the two to close tightly but I was able to correct that without much difficulty. 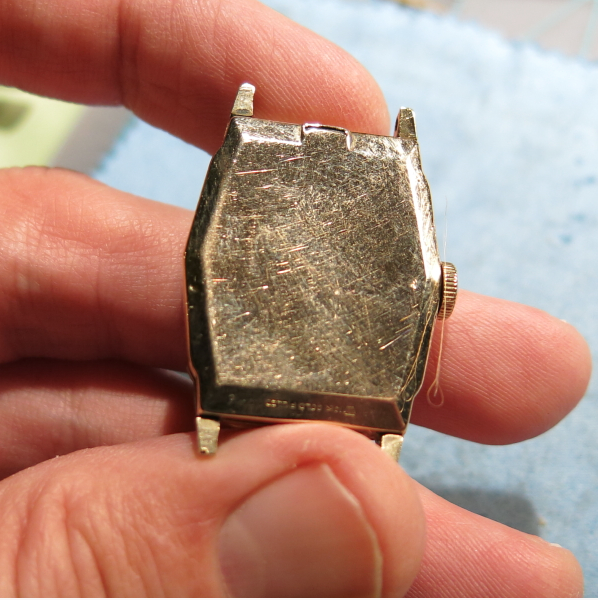 Here's the inside of the case back… no "Hamilton Watch Company" in here.  Most jobber cases have rolled gold plate or even stainless steel case backs - so that's another good sign the case is correct for a Turner. 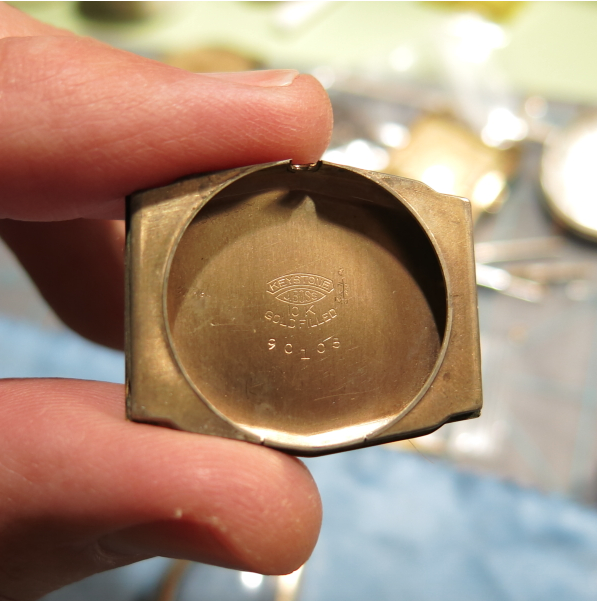 Here's the 17 jewel 987F.  The serial number dates it to 1935, just as it should.  It's pretty dirty but it runs - so that's a good sign that just an overhaul will be needed to restore it to good health. 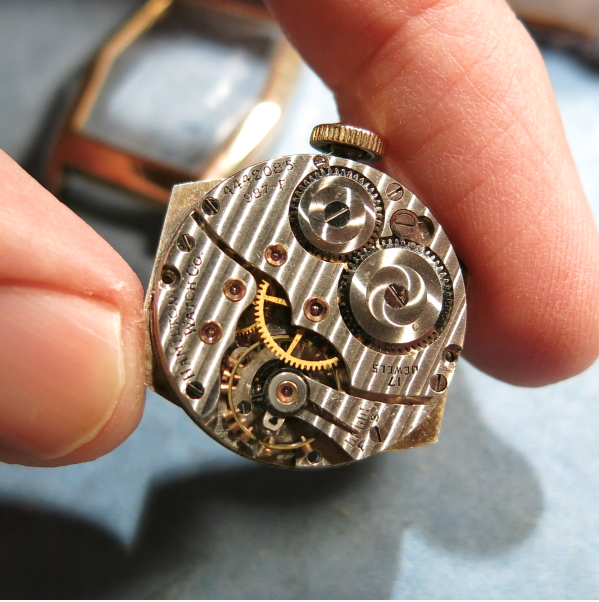 The usual thorough-cleaning and a fresh white alloy mainspring result in vigorous amplitude and almost spot-on time keeping right out of the chute.  No tweaking needed for this watch. 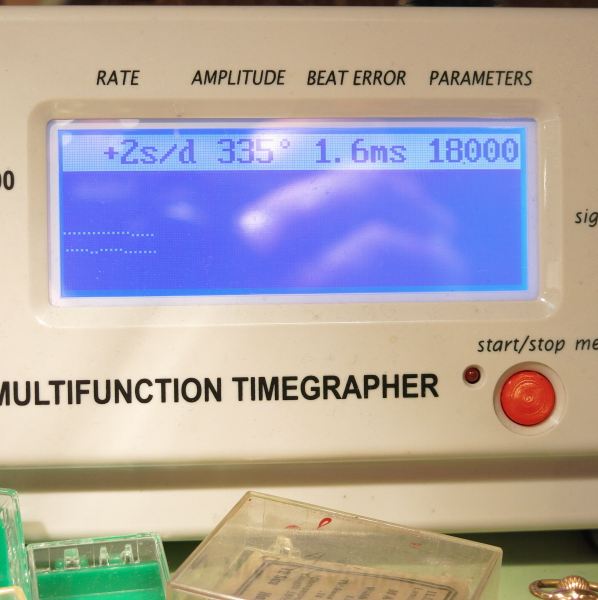 And here is it all spiffed up with a fresh glass crystal and new brown lizard strap.  This style of hands is called "baton" and are the correct style for Turners.  My camera always surprises me by pointing out every flaw but other than a little wear to the lower right lug, this bezel looks fantastic! 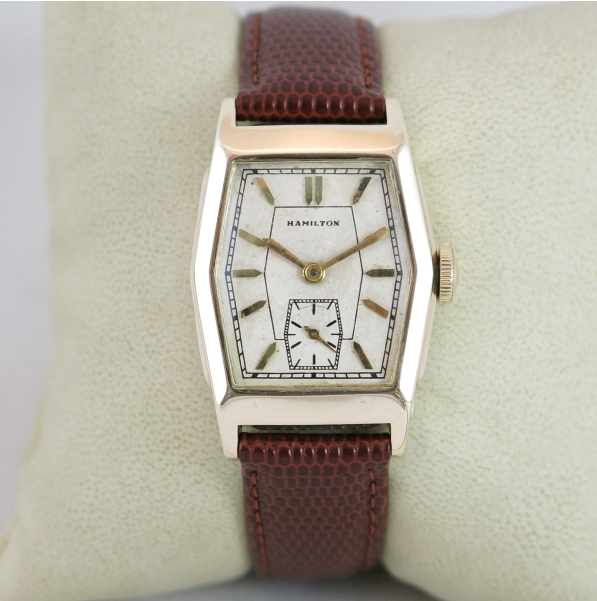 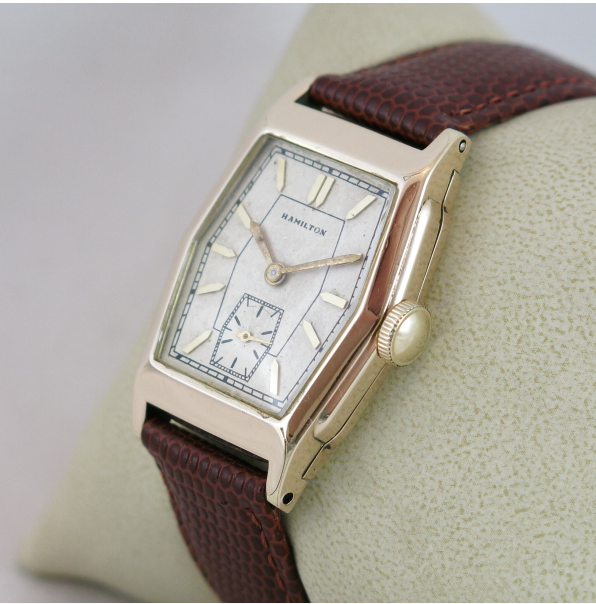 And here's an example of the 1935 black combination marker / numeral dial, courtesy of fellow collector Bryan Girouard.  Bryan offers a lot of fantastic vintage watches for sale - check out his site and buy with confidence… artdecowristwatches.com 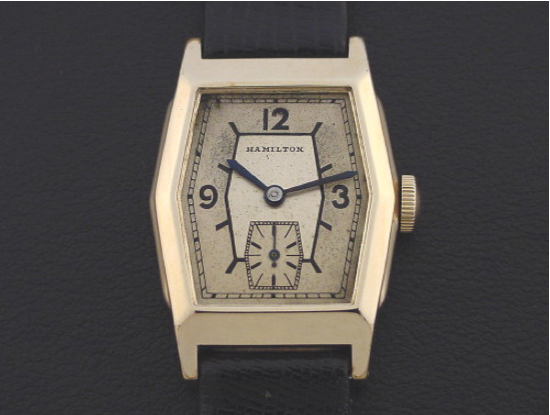