I think no Hamilton collection is complete without a nice dress watch.  To me, round watches tend to be on the casual side.  Don't get me wrong, there are very nice round dress watches.   However, nothing is as elegant as a solid gold square or rectangular dress watch. 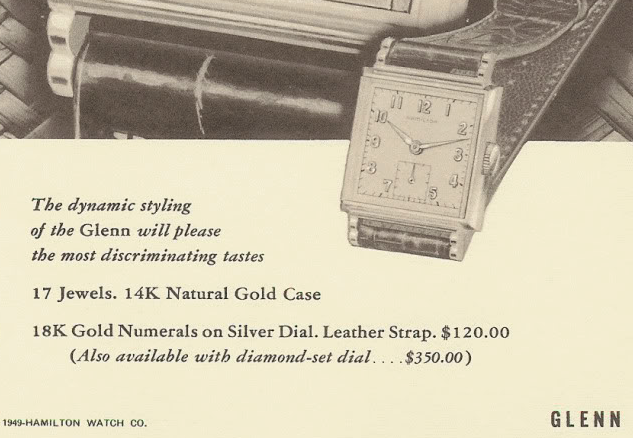 One of the things that makes the Glenn a fine dress watch is it's size. The 8/0 movement is larger than the 14/0 movement that was used in most tank-style watches to date.  Watches in the 1940s were especially small.  Being even just a little larger,  it has a more prominent wrist presence.

The case is solid 14K yellow gold and you had an option of a diamond-set dial making it one of the earlier examples of authentic models to feature diamonds.  There aren't that many diamond-dialed Glenns out there though - as you can tell from the ad, it was almost 3X the cost for the diamond-set model!

I recently purchased a Glenn from a fellow collector.  It was running but definitely in need of a trip to the spa.  The glass crystal was scratched and the dial could stand to be redone. 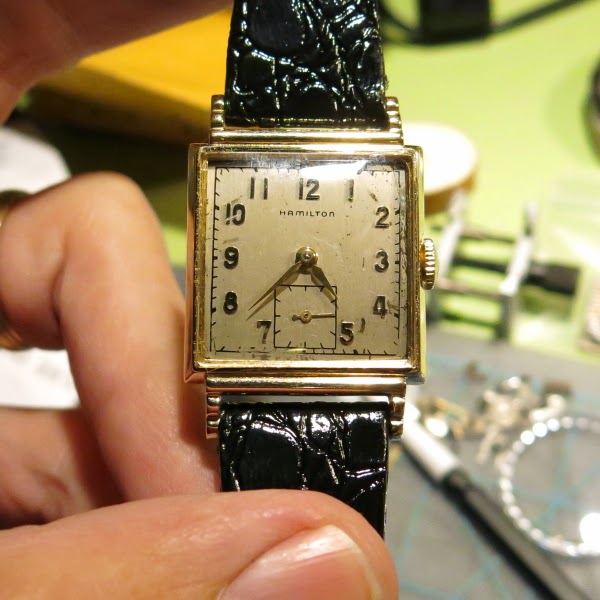 Although the watch was running, it wasn't running very well.  Check out that beat error - 9.5ms... that's about as high as I've seen.  The low amplitude is mostly do to having only been wound a few times. 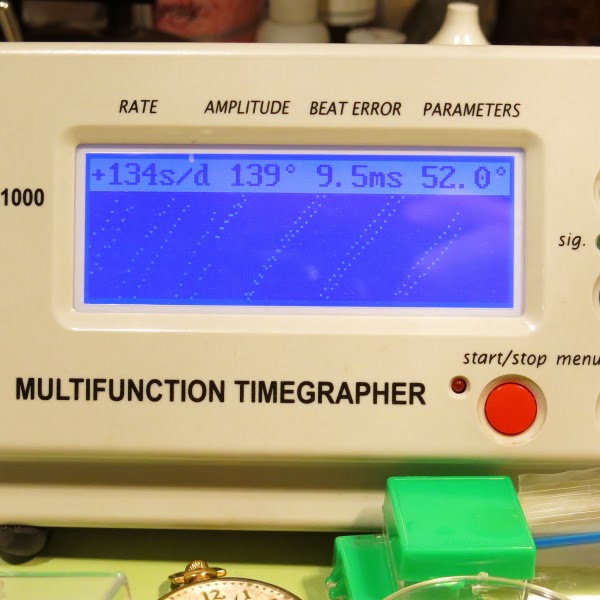 Oddly enough, someone had painted the solid 18K gold numerals black.  I guess they liked the look.  The paint is missing in a few places though so I'll do my best to remove it without screwing up the dial any more. 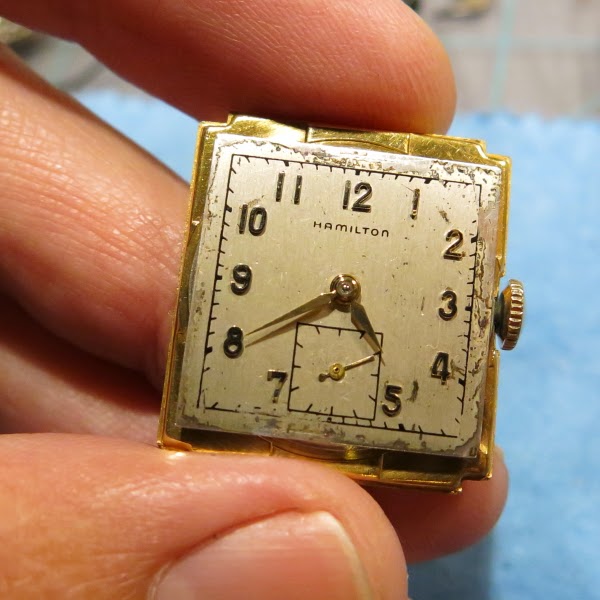 I don't see any obvious service marks inside the case.  Sort of makes you wonder how many times this watch saw a watchmaker in it's 60+ years of existence. 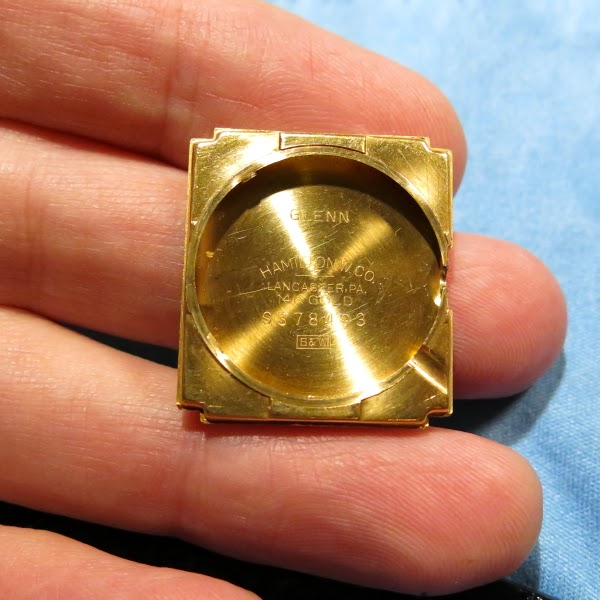 The 747 is a wonderful movement, in my opinion.  It's very easy to work on and forgiving if you're not really sure what you're doing - so it's a great movement for wannabe watchmakers who want to see what makes a watch tick.  It's way easier to work on than it's sibling, the 18 jewel 748.  The 748 is arguably the most challenging movement of them all... with the exception of a couple of automatics I know of. 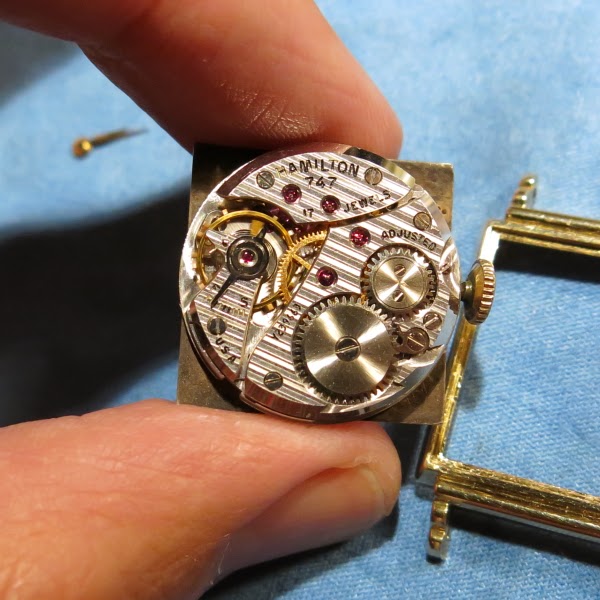 I wasn't surprised at all to see some marks scratched into the back of the dial.  It was obviously already refinished at some point. While the movement is being cleaned, I'll prep a new glass crystal for installation. 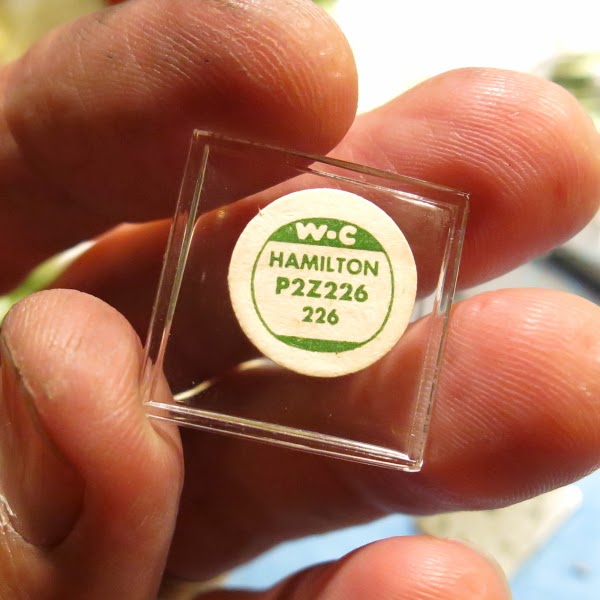 I'll also get a new white alloy mainspring ready to go into the barrel, once it comes out of the ultrasonic. 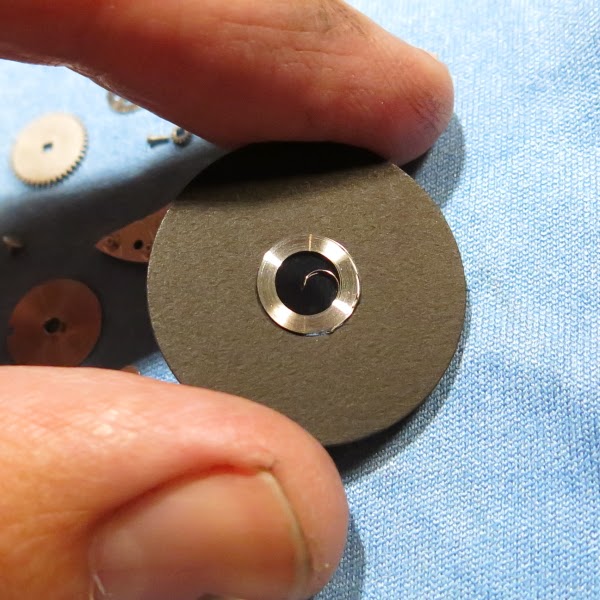 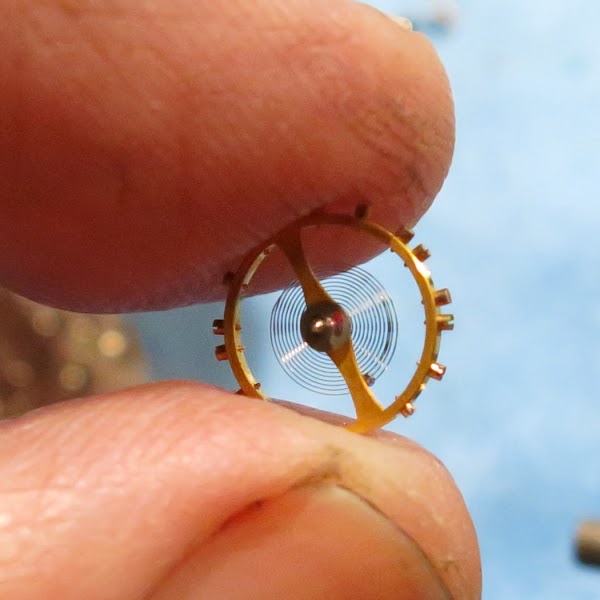 Here's a shot of the balance reinstalled in the balance cock.  The outermost coil of the hairspring needs to go through the two-pronged regulator fork - as that is what will adjust the timing of the watch once its running again.  If the hairspring doesn't go though those two prongs, moving the regulator won't do anything. 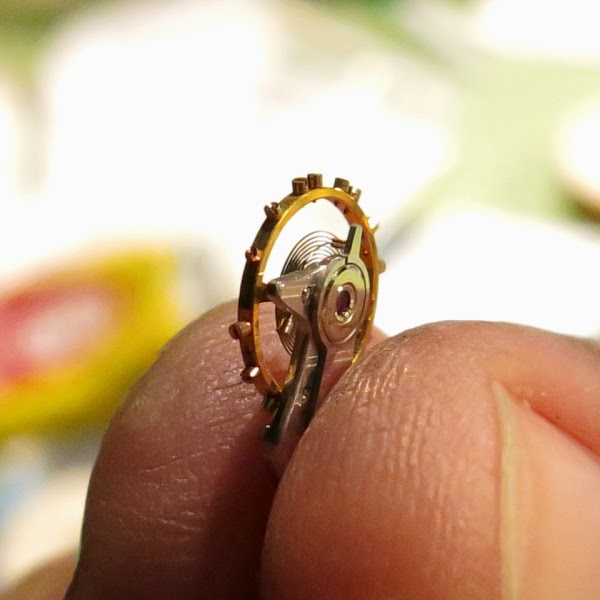 To check the beat error, you need to look at the impulse jewel through the two banking pins and see if the jewel is lined up with where the pallet fork will eventually go.  Below, you can see the little pink jewel in between the two silver posts (banking pins).  It looks very good at this point.  Now I can take the balance back off and reassemble the watch. 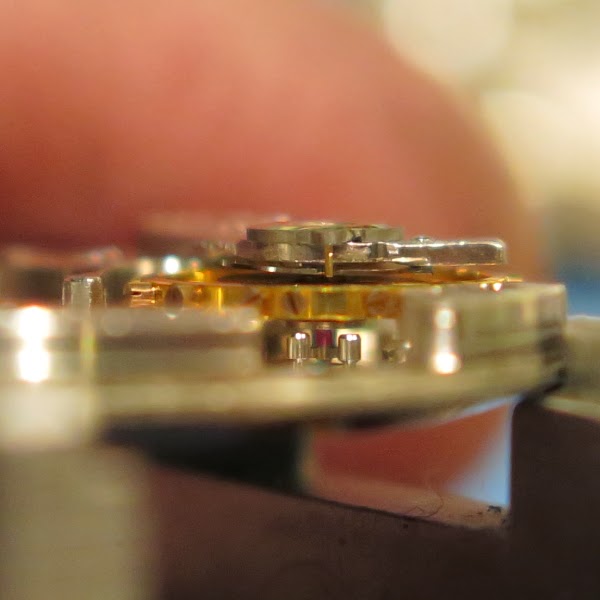 I put the watch back together with fresh lubrication and, after a full wind, the watch is running great.  Notice the excellent beat error of 0.3ms.  The high amplitude is thanks to the new mainspring and a little tweaking to the regulator gets the two parallel lines to level out at just a smidge fast. 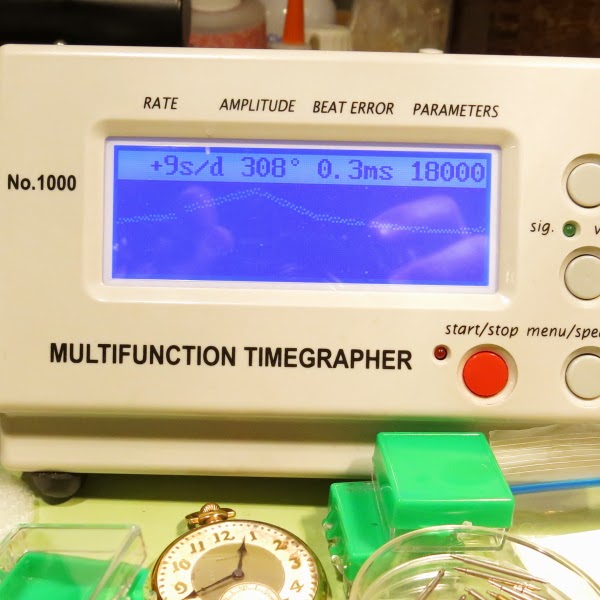 My light tent is merciless.  It will reveal any flaws that the naked eye has difficulty picking up.  I did manage to get the black paint off the numerals though - and I didn't lose the dial printing in the process.  That was very lucky.  However, the "finished" watch isn't quite finished yet... I could probably live with the dial if it was original but since it has already been redone once I'm willing to do it again so that it will look as flawless as the rest of the case and crystal. 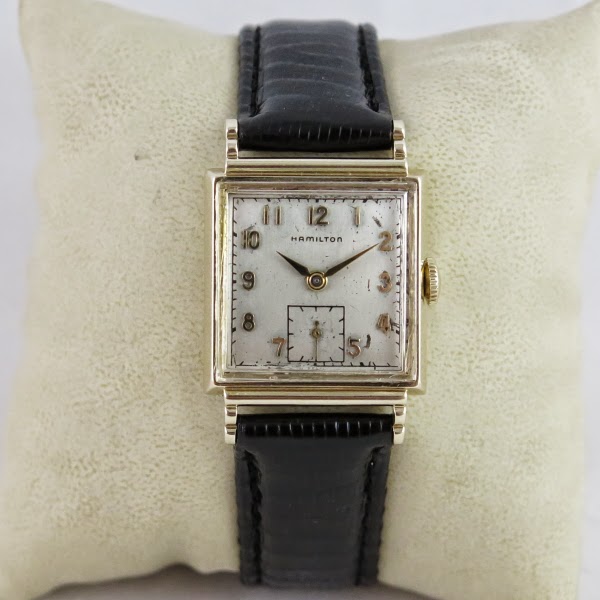 I think the hands are a little short for the watch - so I'll change those out too while I'm at it.  In fact, I can even put a better second hand on as well.  So stay tuned for a future update.

I finally received my refinished dial back from the refinishers.  They did a nice job and it was worth the wait.  I also added a new set of correct length hands.   Note how the minute hand should line up with the minute track at the shortest distance from the center, in this case the 3 and 9.  Typically the hour hand will be long enough to reach the hour marker at the same locations.  A slightly longer hour hand and minute hand is a nice improvement, don't you think?