Most Automatic watches are round.  I guess you can do a lot to jazz up the design of a round watch and make it unique.  For example, you can add funky lugs or an embossed dial, put steps on the case, or use a reflector ring, etc.

However, there are a few, albeit a very few, automatics that are not round, but instead square.  In fact, I can only think of a couple, that's how few there are. The K-405 is a grand watch, in my opinion.  It's fairly big and chunky since it has to fit a round automatic movement and has room to spare in the empty corners.

The K-405 came in a 10K yellow gold filled case with a silver dial and solid gold markers.  The dial is flat in the center and slopes down to the edges - which is an interesting effect.  Since the shortest distance from the center to the outside edges is at the 12, 3, 6 and 9 positions, the hands on the K-405 appear to be shorter than typical.  I think that's a bit of an illusion though the second hand is definitely shorter in order to line up with the pearled track inside the markers.

Tucked inside the two-piece gold filled case is a 17 jewel Hamilton 661 movement.  This particular grade was a workhorse in Hamilton's earliest automatics and is in most of the Automatic K-series watches.

I recently scored a K-405 and was very happy because it's the only K-series watch that isn't round.  The other square auto is a Thinomatic, the T-401from 1959.  As received, my project watch was in decent enough shape.  It had a new crystal but the dial inside was a yellowish green color... a subtle clue that this watch is a victim of a few decades of second hand smoke (it's probably nicotine on the dial). 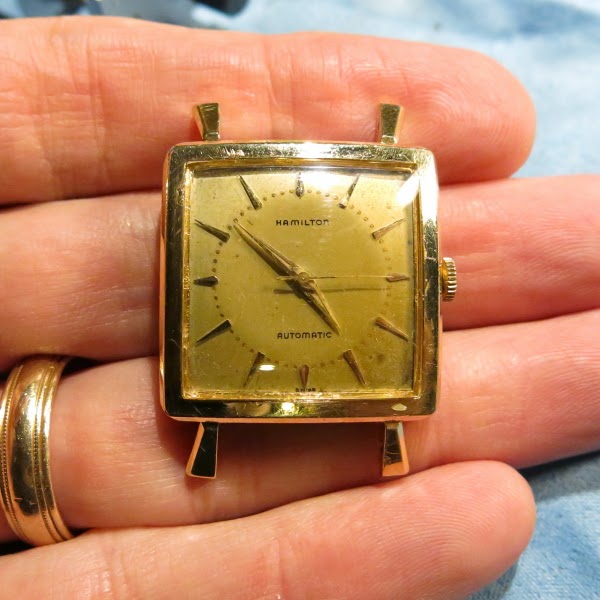 The back of the case is in great shape and it snaps on tightly. 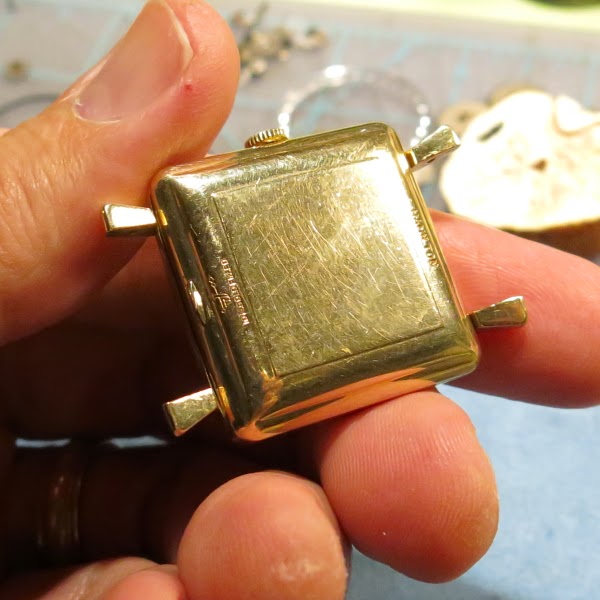 This is the first automatic I've seen where the movement sits in the case back without being a front-loader.  The 661 is clean and bright.  I don't know when it was last serviced, so I'll do it anyway just so I know there's fresh lubrication inside.  Clean doesn't mean lubricated. 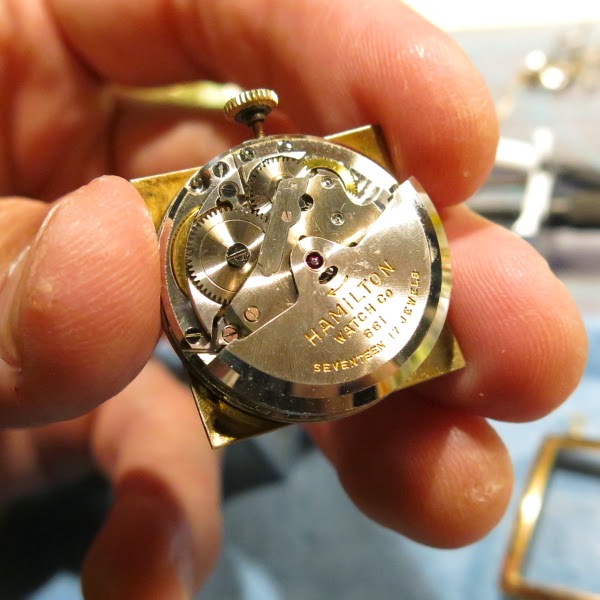 All the parts are cleaned and ready to be reassembled.  I was able to clean up the dial pretty well and revealed the original butler finish underneath the grime. 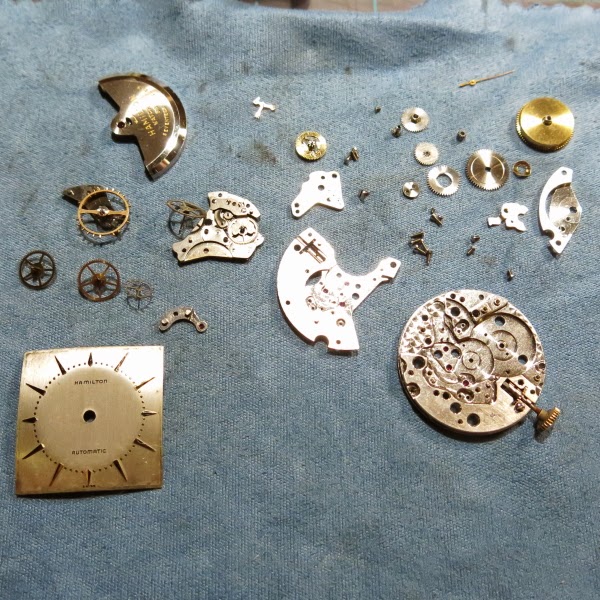 Without the oscillating weight attached, the reassembled movement is basically a manual winding movement.  It's all back together and running so next stop is the timer. 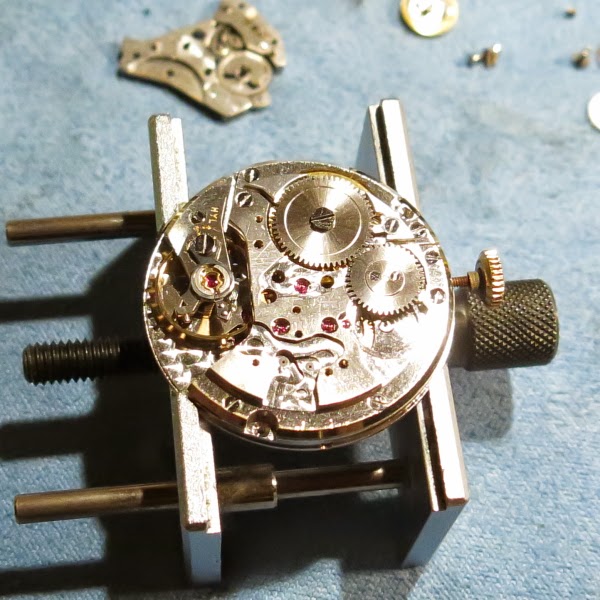 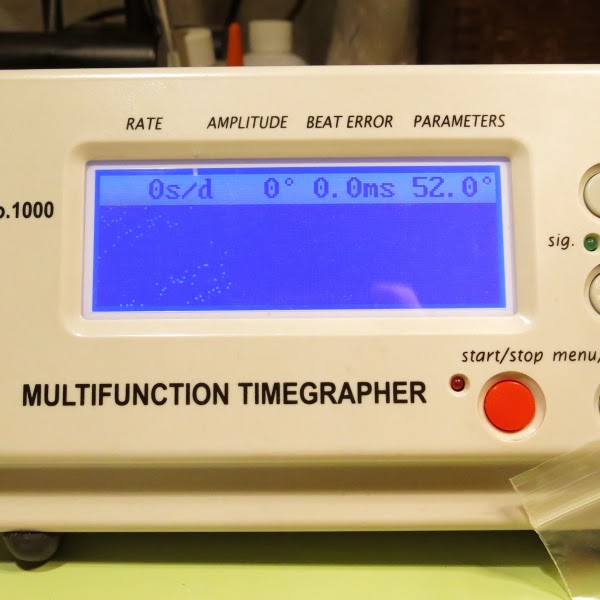 Re-cleaning the hairspring solved the problem.  I'd never know I had an issue if I didn't have a timer... it's one of the most important tools in the arsenal.  A little tweaking to the regulator brings the beat rate right in line.  The beat error and amplitude are great too. 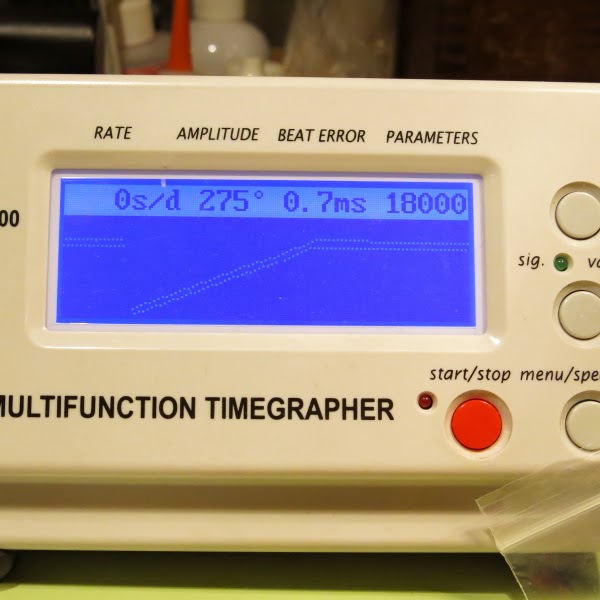 The rotor goes back on, as well as the dial and hands and it all snaps cleanly back into the case again.  I relumed the hands since the rest of the watch is very clean looking now.  What an improvement the brighter dial is!  I got lucky on cleaning this one... they don't always go this well. 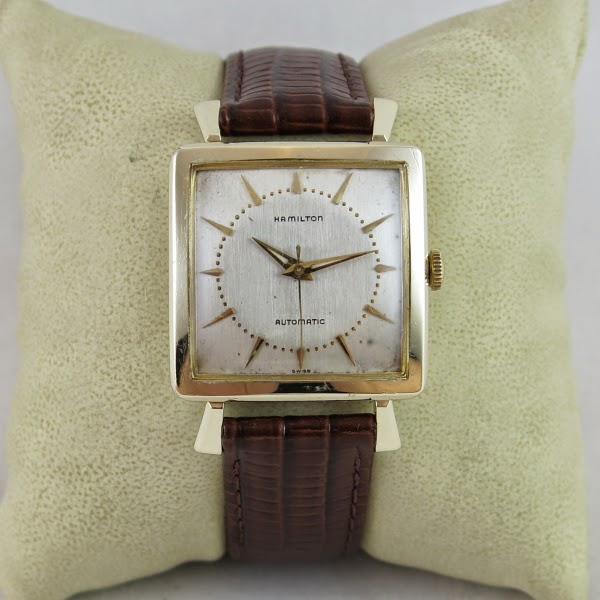