My last post on the Nautilus II featured the start of an interesting trend in Hamilton watches, that being reusing names with a roman numeral at the end.  That trend was started in the mid 1950's - 1955 to be exact.  Often a "II" model was introduced along with a similar, but different "I" model.  Sometimes there was even a "III" model.  In fact, in the case of the Stormking models, the numbers went all the way to "XI" (11). 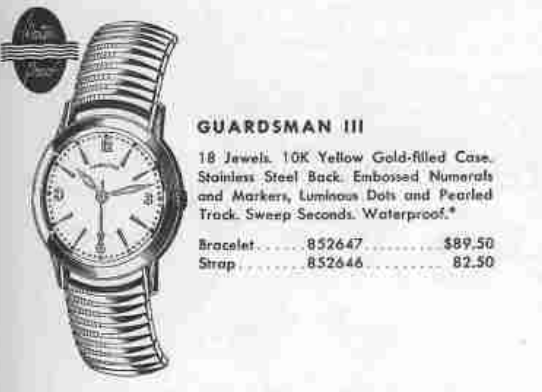 I'm a little surprised the Guardsman III was only produced for a single year but maybe it's early demise was caused by it's added cost.  Of the three models, the III was the most expensive (on a strap, anyway).

Part of the reason for the Guardsman III's cost was it came in a 10K gold filled case and featured the American made, 18 jewel 735 movement.  Swiss-made grades in rolled gold cases offered a lower price point.

The Guardsman III did cut some corners though, as it was outfitted with a little with an embossed dial and not the typical sterling silver dial with solid gold markers that you'd normally see on Hamilton's standard high quality models.

I recently purchased a Guardsman III project watch.  As received, I was a little concerned that it may be a little too far gone to be resurrected.  I was pretty sure the best I might get out of it was a spare movement.  The case wasn't too bad though - so I figured a good cleaning was worth a shot. 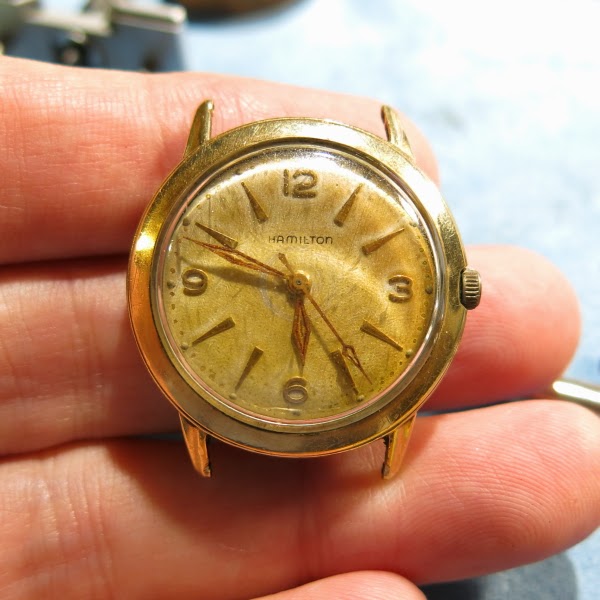 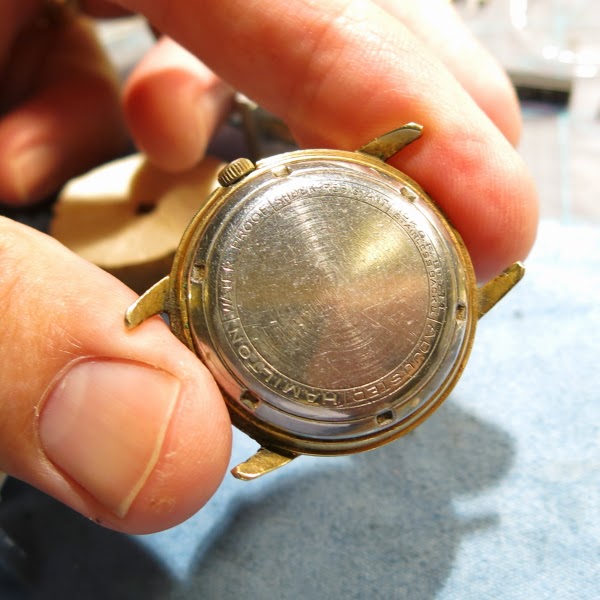 The 735 is an excellent movement and was introduced in 1955.  It's basically a shock-jeweled version of the 748 that was introduced in 1947.  The movement ring in this one is a first for me.  I've seen this style before but not in authentic models... mainly in "jobber" cases where a jeweler recased a movement in an aftermarket case.  It seems to fit okay, but I don't know if it's original. 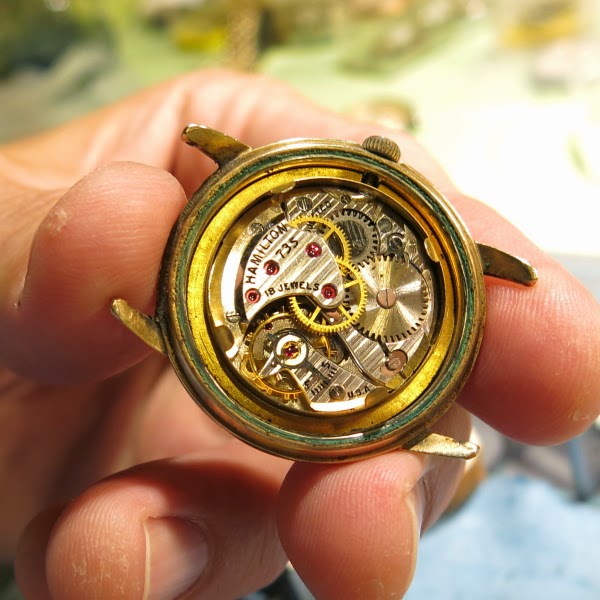 The inside of the case back is clearly stamped so you know this watch is the "real deal". A jobber case would not have any of this "Hamilton Watch Co" information stamped inside. 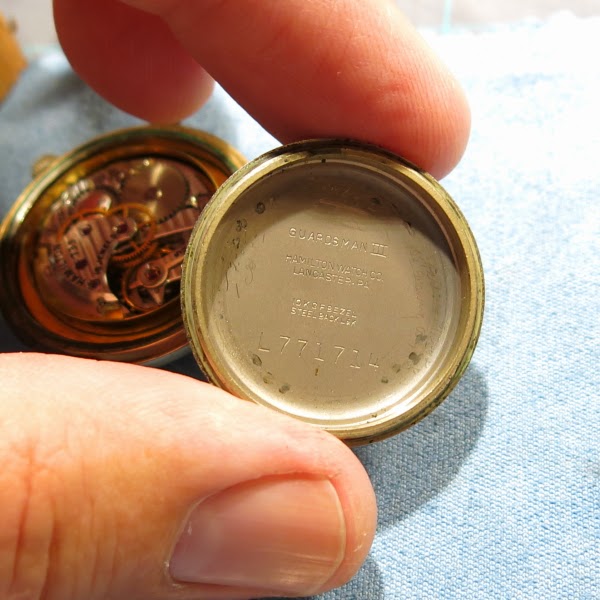 Even with a slightly blurry photo, you can see that this watch's hands have seen better days.  The dial is super dirty and it's an old refinish.  The little circles in the center of the dial are from the dial being loose and hitting the hour hand. 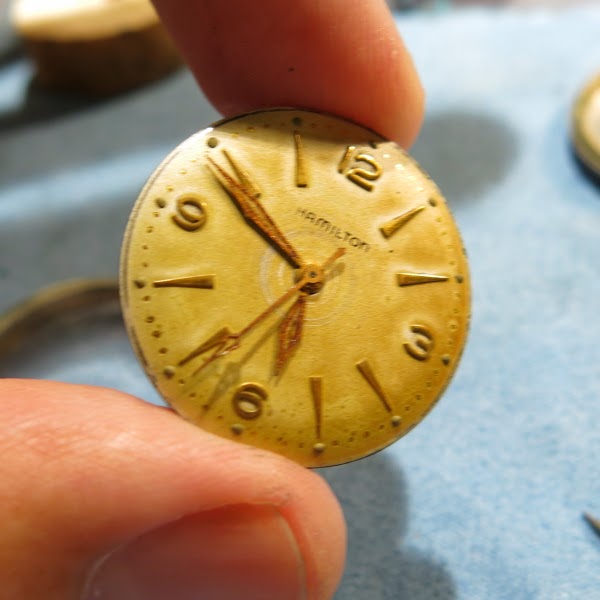 The first thing I'll do is see if I can clean the dial up.  If that goes well the rest of this project should be a breeze. 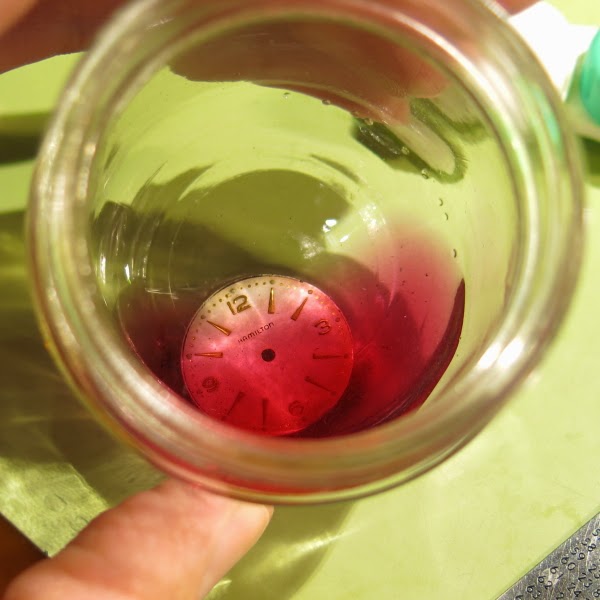 These 8/0 sweep second grades are terrifyingly difficult to reassemble, thanks to the four-wheeled train bridge and four very long arbors to align.  You have to get all four wheels lined up in order to put it back together.  I don't have any problems with it now - but way back when I started this hobby I broke more of these movements than I care to count. 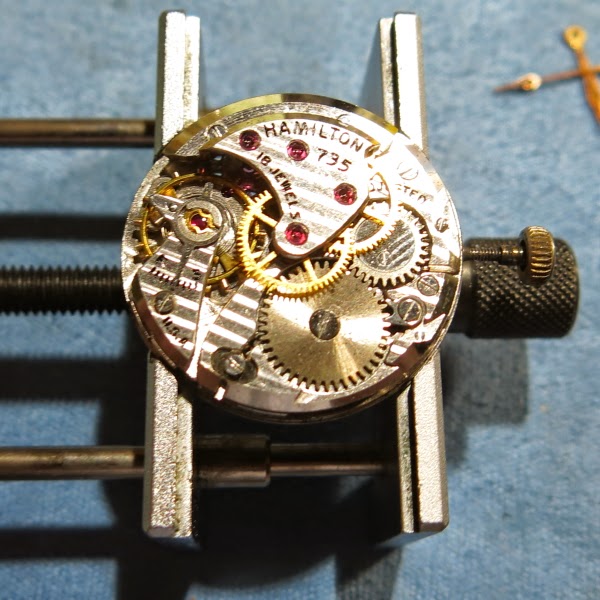 While everything is being cleaned I will get out my lume kit to redo the hands and dial dots. 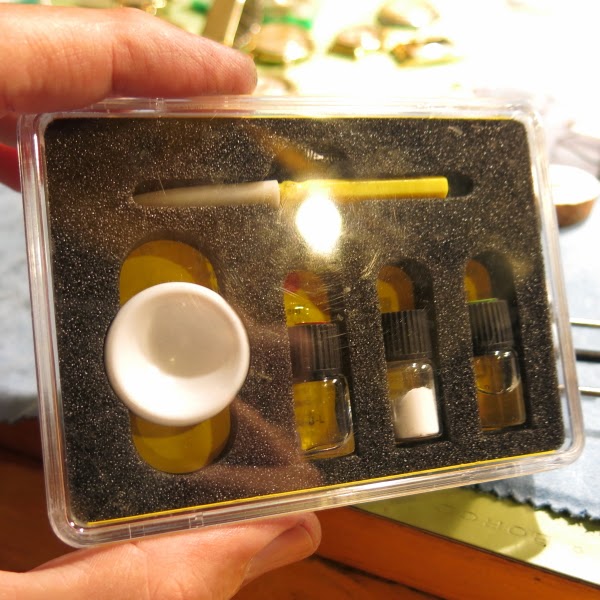 Fresh lume is floated across the back of the hand, almost like how soapy water is applied to a ring when blowing bubbles.  If you do it right, you don't get any on the top of the hand.  Once the lume dries, it will be nice and hard. 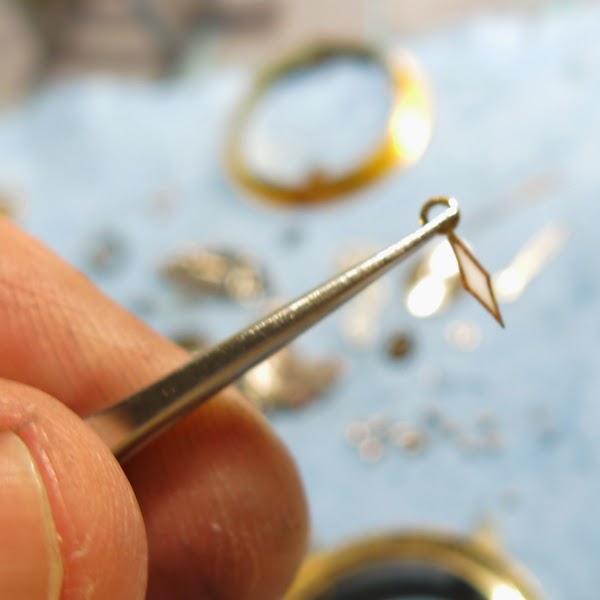 Everything cleaned up nicely and is ready to be reassembled. 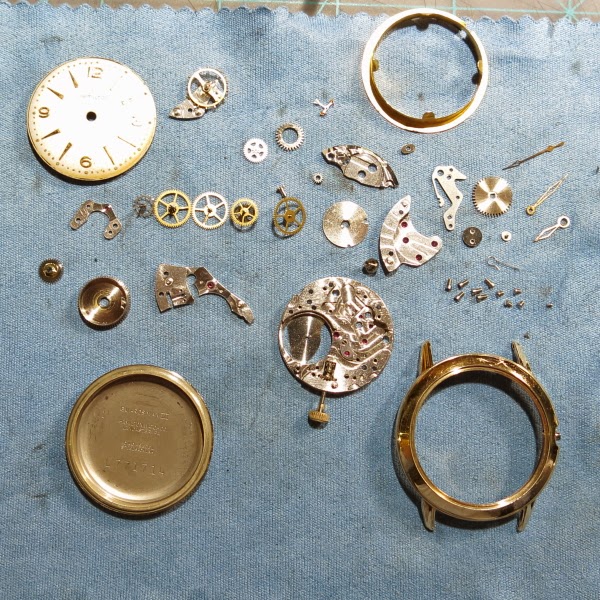 This is the angle that I peek into the movement when I tweak all the wheels and get the pivots lined up on the train bridge.  When everything is lined up correctly, the bridge will fall into place. 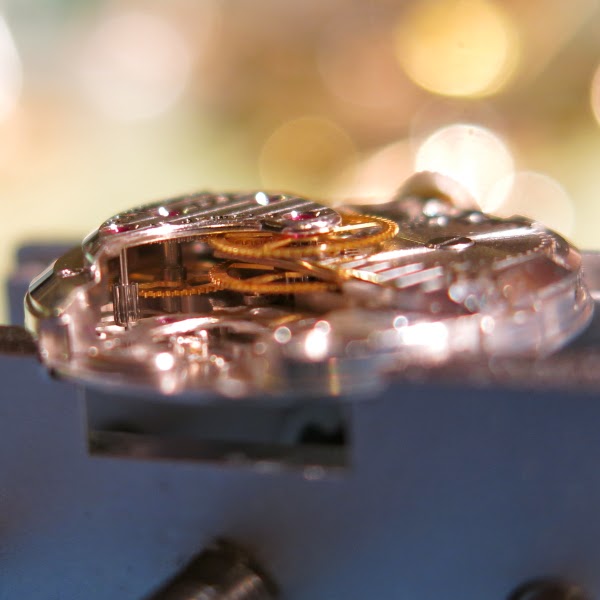 The now running movement goes onto the timer. 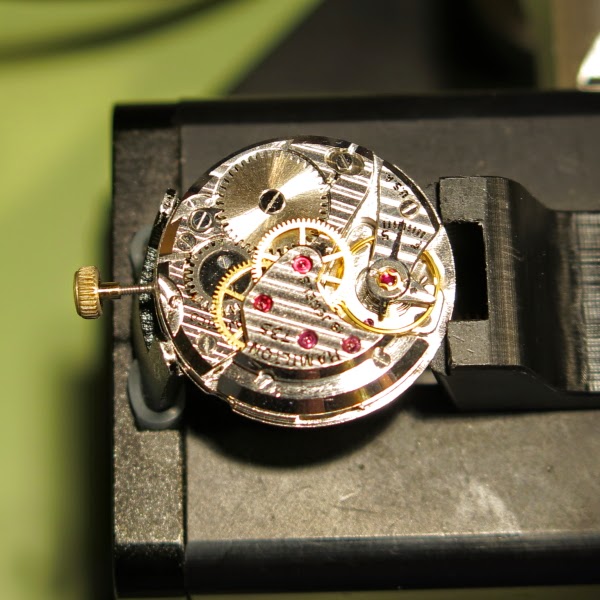 It's running over a minute fast but the beat error and amplitude is great. 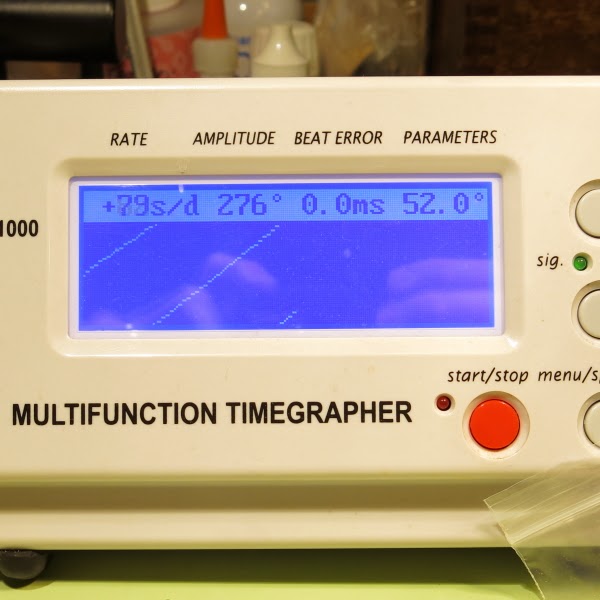 A little tweak to the regulator brings the beat rate right in line. 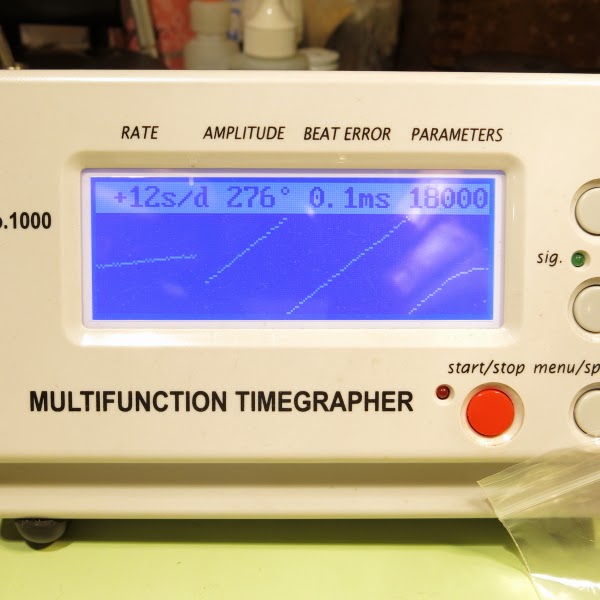 Well, I have to admit that this watch turned out way better than I thought it was going to.  A new crystal and ostrich strap complete the overhaul.  There's not much I can do about the rings the hour hand made on the dial but I don't thing they are terribly distracting.  The fresh lume on the hands, including the second hand really make the watch pop. 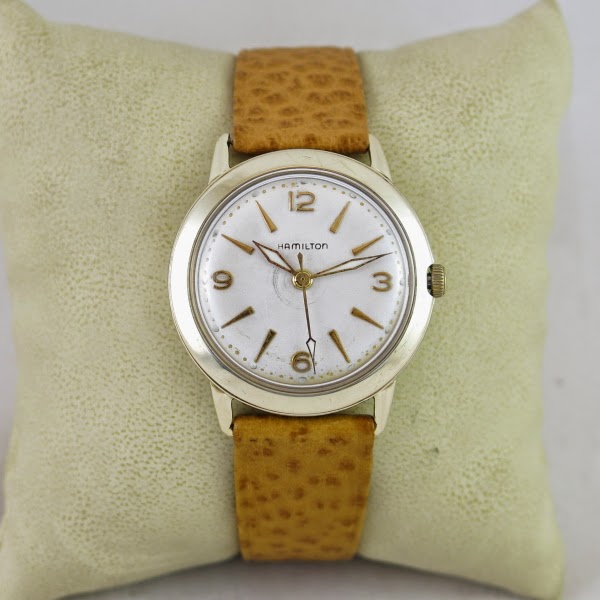 Here's a slightly darker exposure to show how they glow in the dark, including the dots at the hour markers. 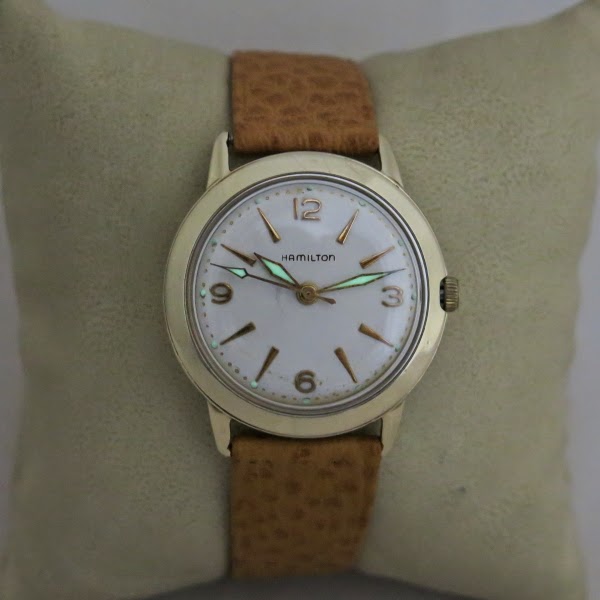