If you've followed my blog or are just knowledgeable about Hamilton watches in general, then you've surely noticed that Hamilton wasn't very creative with how it named Automatic models.  Sure they throw you some curve balls with things like the Rotomatic and the Astramatic line - but for the most part they just numbered them with three digit numbers.  The first number is the case material and I think the second number may be relevant since there are a lot of "X5X" models but from there it doesn't really seem to make much sense.  At least it's not obvious to me, anyway.

To underscore that point, I think it's interesting that some Hamilton models with lower numbers where introduced after models with higher numbers.  It's not common, but it did happen.

For example, there's the 1962 Accumatic A-500.  It was introduced a year after the Accumatic A-501.  Sort of makes you wonder what happened... was it delayed for some reason or was it just a matter of chance?  Regardless, the A-500 was produced for only two years so you don't see them terribly often.

The A-500 comes in a stainless steel case.  It's considered "waterproof" since it has a gasket on the screw-off case back and the crown - but I would never take a vintage watch near the water.  Actually, I wouldn't take a modern waterproof watch into the water either - but that's just me.

Tucked inside a A-500 I would expect to see a Hamilton 689 movement - although my recent project watch below has a 679 movement.  Both were made by ETA and they look VERY similar.  The 689 is based on an ETA 2451 while the 679 is based on an ETA 2465.  They look pretty much the same to me but there must be something inside that makes them different.

My A-500 project watch came from a fellow collector who needed some help with it.  As received you might say it had "good bones" which is a nice way to saying, "boy is that watch ugly".  The dial was either very dirty, very corroded or both.  Of course, the heavily scratched crystal wasn't helping things.  But it did run - so all was not lost. 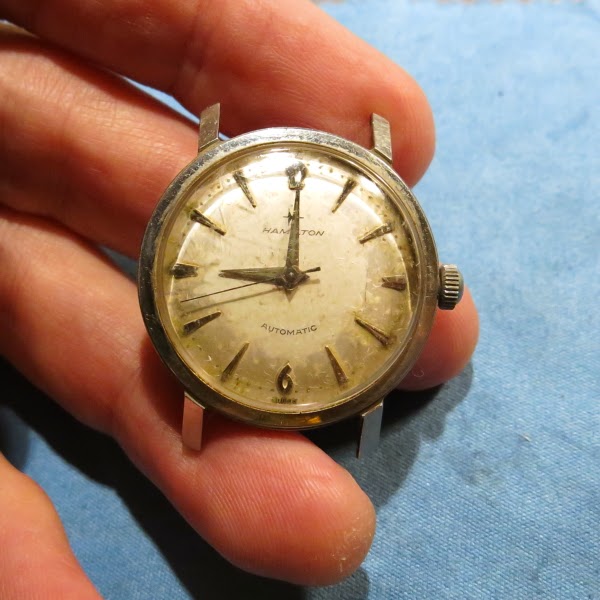 I was glad to see the screw-off back - I prefer that to single piece cases.  Single piece cases are always a little intimidating to get the movement out... you don't want to break the two-piece stem.  Although sometimes these screw off case backs can be a real bugger to open as well... so it's a tough call.  I guess it's sort of a "pick your poison" decision. 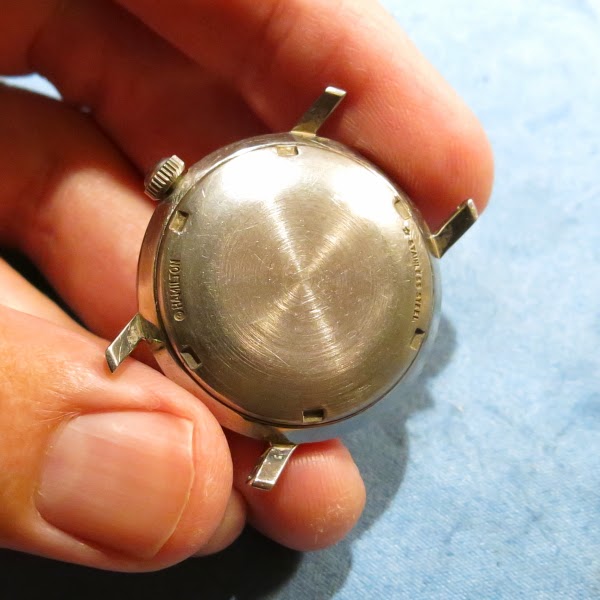 This one opened right up without any difficulty at all.  The movement inside looks to be relatively clean and rust free - so whatever effected the dial didn't impact the movement - which is lucky. 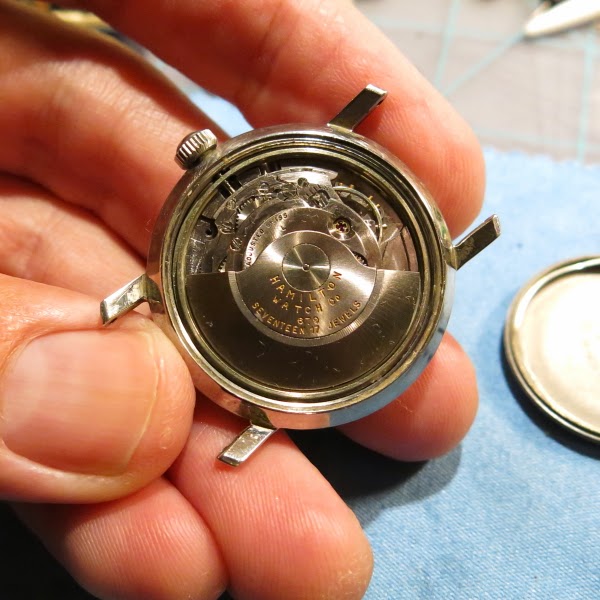 Without the crystal in the way, you can see that the embossed dial is dirty.  The second hand actually has some lint wrapped around the post.  The lacquer on the dial has failed and peeled away around the outside perimeter.  Other than that, it looks great (ha ha!). 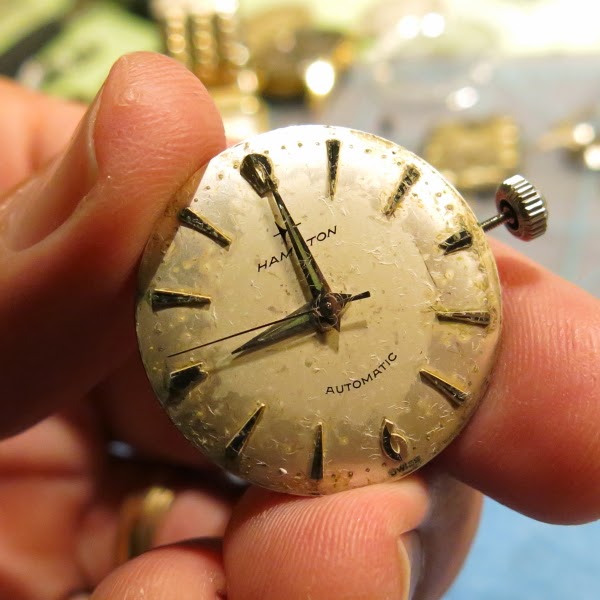 While everything is being cleaned, I'll gently clean up the dial.  You have to be VERY careful when the lacquer has failed - as the next thing to go is the printing and then you're screwed.  I've learned and relearned time and again that you have to know when to say when and to stop cleaning before it's too late. 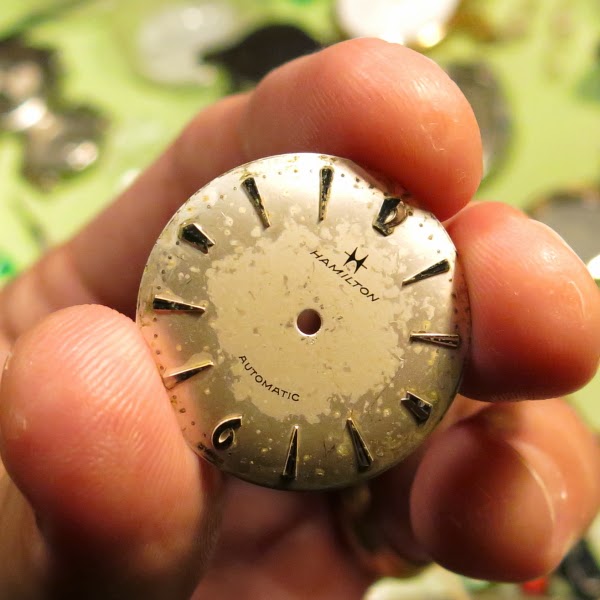 I've also learned that when a dial looks better wet than it does dry, that a "poor-man's refinish" is a good option.  If a dial looks like crap when it's dry, you probably should consider getting it refinished - and in that case, going the poor man's route won't do any harm.

By poor man's refinish, I mean a very quick and light spray of fresh lacquer.  You can get this from any craft store and it's the sort of thing you'd use on model airplanes, and such.  A little goes a long way and you can see below that after the lacquer dries, the dial looks much better.  It's not perfect, but it's not expensive to do either and the dial is technically still "original". 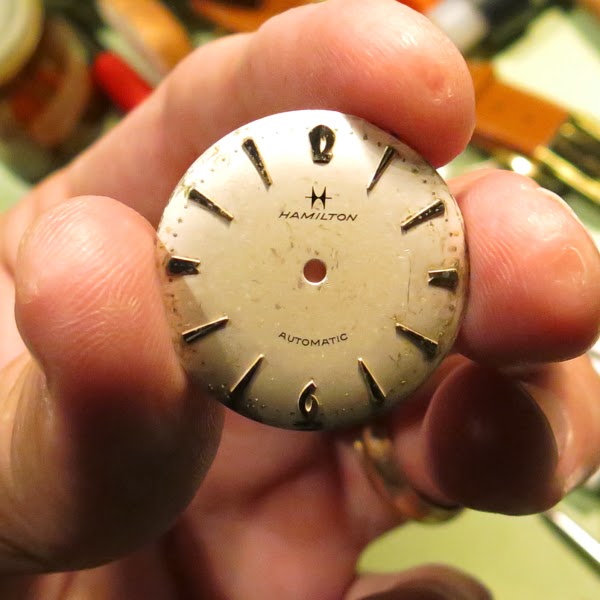 All the parts are thoroughly cleaned and dried before being reassembled.  I'll also install a new GS PHD (high dome) crystal with a 29.8mm diameter. 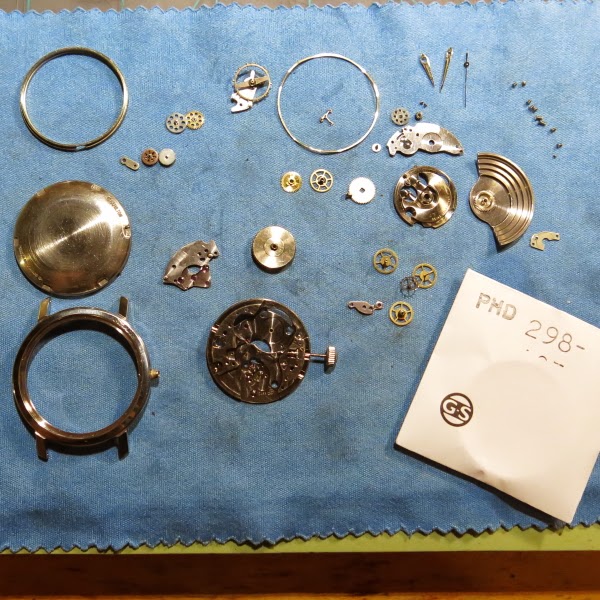 You can often see the grade of the movement stamped under the balance wheel, along with the maker.    You can see this is a 2465 movement made by ETA.  Back in the day, ETA was an ebauche maker (they still are)... meaning they produced partially made movements that other watch companies would finish and customize.  That's good to know when you need a part, as that part could just as easily come from a Benrus as from a Hamilton. 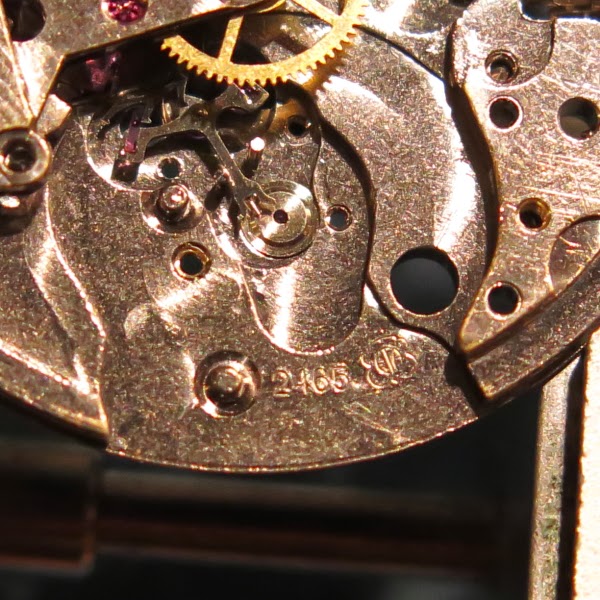 The movement is reassembled and running so it goes onto the timer.  I'll put the oscillating weight (aka rotor) onto the movement later.  It's easier to make adjustments when the rotor is out of the way. 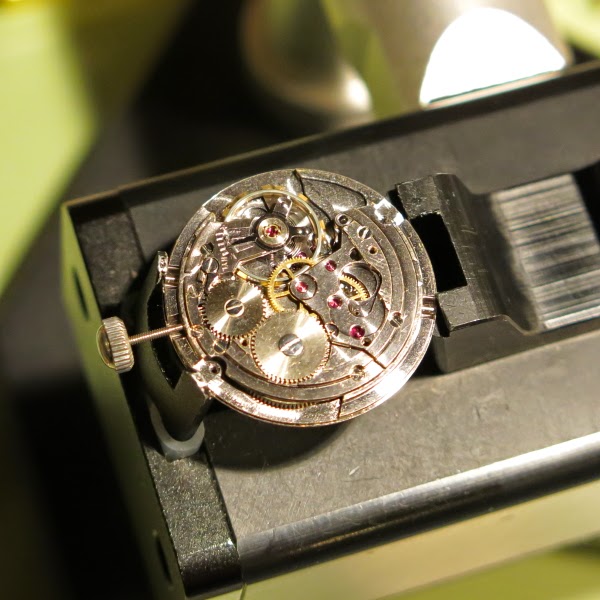 Everything is running nicely.  I'll leave it running slightly fast for now, as they tend to slow down slightly after a while. 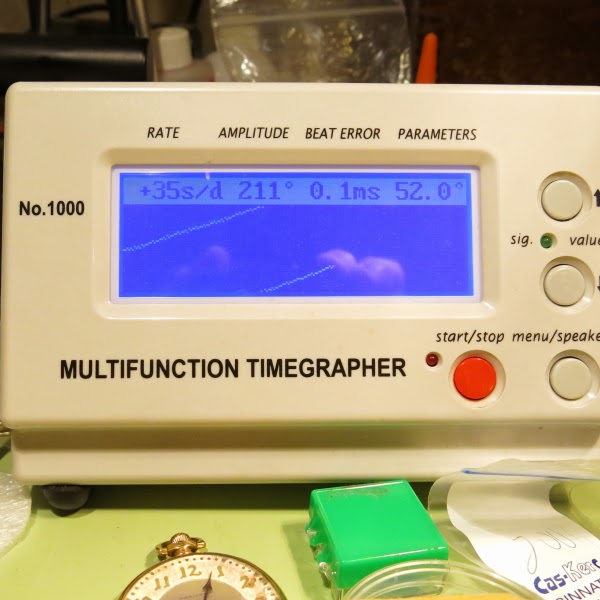 With the movement doing it's thing, I can turn my attention to the rotor carrier.  There aren't that many parts to it, really, but they have to go in the right place and in the right orientation or it won't work properly. 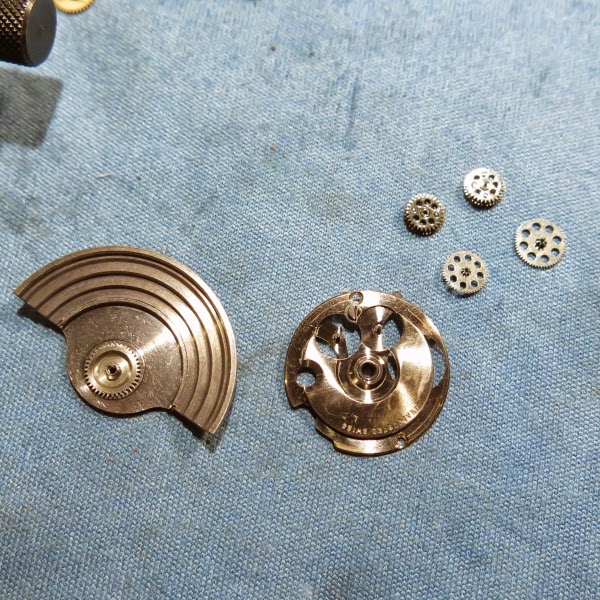 It's ready to be dropped back onto the movement and secured in place with two screws. 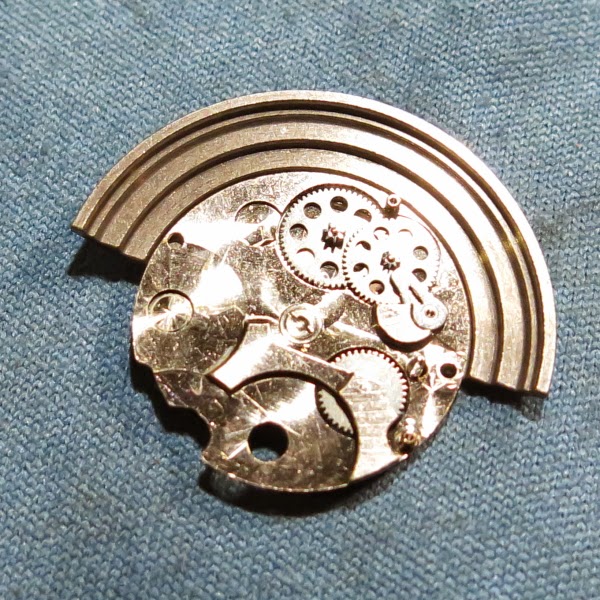 Everything appears to be back where it belongs and functioning properly so now I just need to install the dial and hands and put it back in the case. 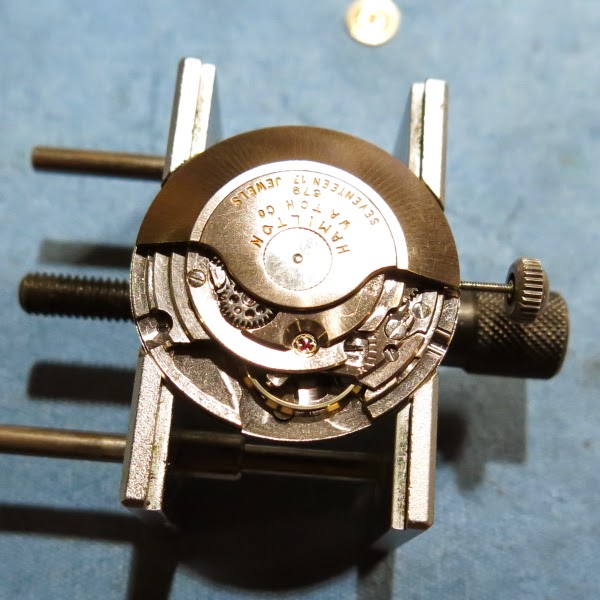 And here's the finished project.  I think it turned out very well and much better than I thought it was going to based on how rough the dial was at the beginning.  The dial doesn't look new by any stretch of the imagination but I bet you wouldn't guess how bad it was if you didn't see it at the start.  This watch is now ready for another 50 years of faithful service. 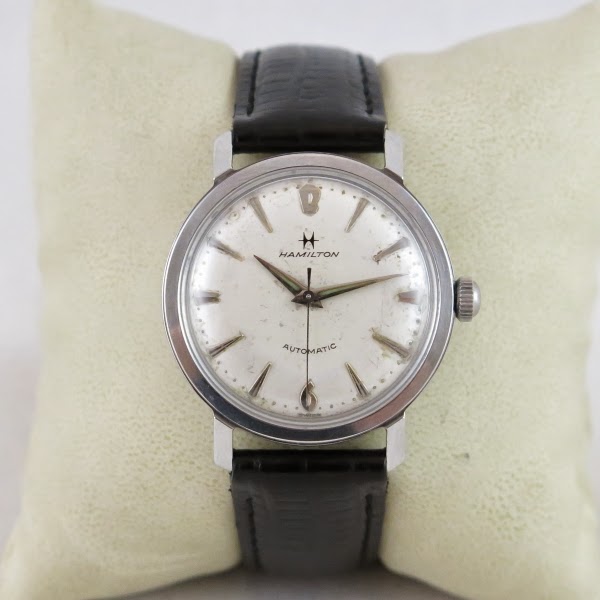