They say variety is the spice of life and if you like spice, then the 1950's is a great period to focus on collecting Hamilton watches.  There is something for everyone... automatics, electric, calendar models, round, square, and sometimes it looks like they weren't really sure what they were going after.

They also say beauty is in the eye of the beholder and I have to admit that I think some models from the 1950's are borderline ugly.  But, to each his own I suppose. 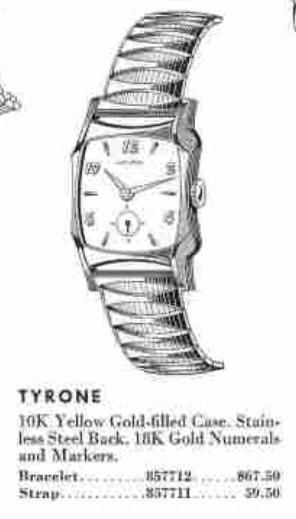 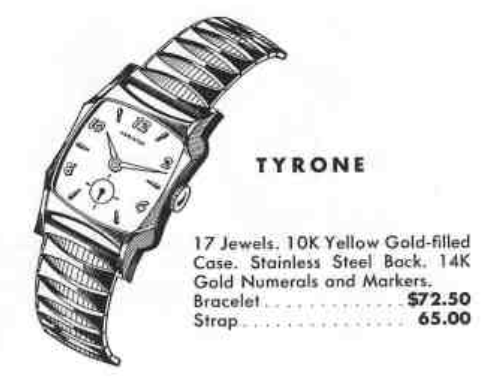 The Tyrone's bracelet was used on a bunch of Hamilton models and I don't think it's as nice a match to the aesthetic of the Tyrone's angular case.  The curved features of the bracelet don't align to anything curved in the watch itself.  Maybe the designers thought the bracelet echoed the curves of the crystal.  I don't know - that's why it's one of the "what were they thinking" models.

The Tyrone has a 10K gold filled bezel with a stainless steel back.  The sterling silver dial has solid 14K numerals and markers.  The numerals are very uniquely shaped and almost look out of place on a Hamilton watch.  I don't know if any other models use the same font style.

I recently purchased a Tyrone project watch and I think it's the first one I have seen.  I don't know if it's considered to be rare but I haven't seen a lot of them for sale.  I was puzzled initially by the funny shape of the numerals, especially the 10... it just doesn't look right (but it is). 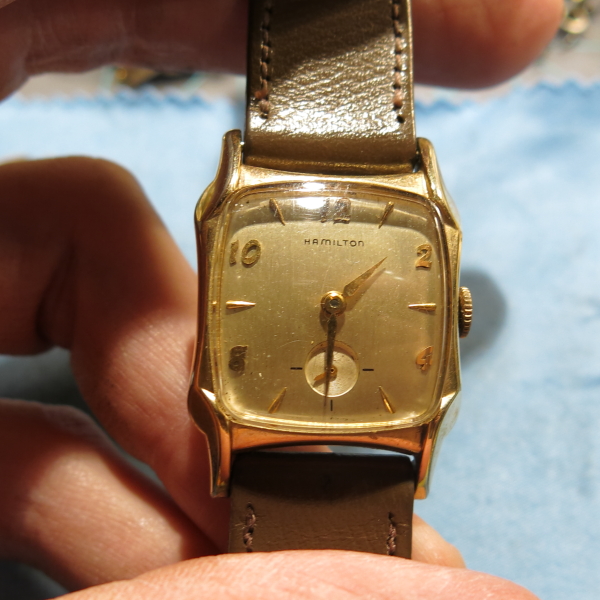 Stainless steel case backs were not really used in Hamilton's line up until the 1950's.  It offered two advantages over a gold filled back... it was less expensive and it wore a lot better.  Hamilton's movements were so well made that the case back often wore out before the movement did.

My project watch's back is engraved with initials and a date but the month of the date is very hard to see.  It should be more pronounced after I polish it. 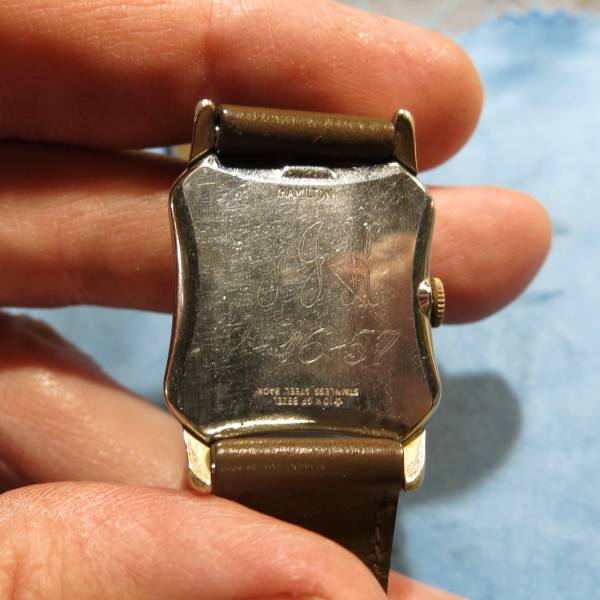 Without the crystal in the way you get a better look at the numerals.  Notice the sloped style of the 0 in 10 and the flair of the 8.  It's very unusual. 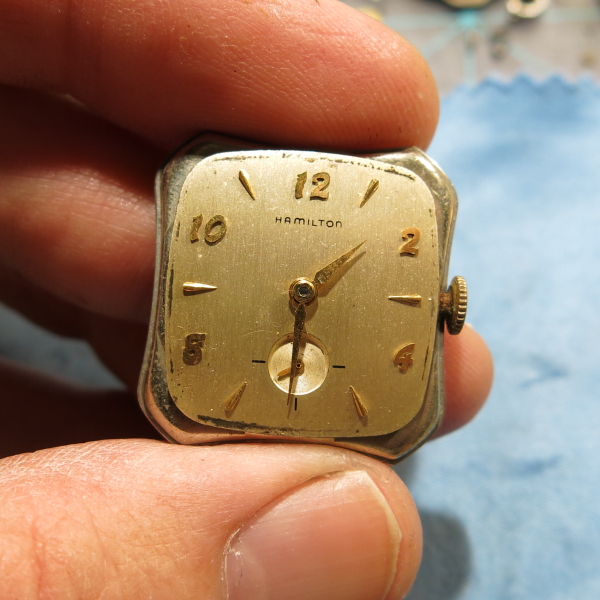 The movement looks pretty dirty and the watch is not running.  Hopefully all it needs is a thorough cleaning. 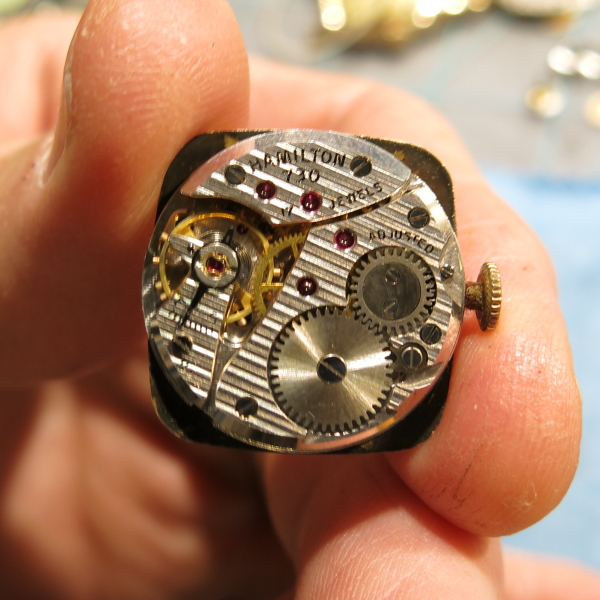 The inside of the case back makes it easy to identify the model. 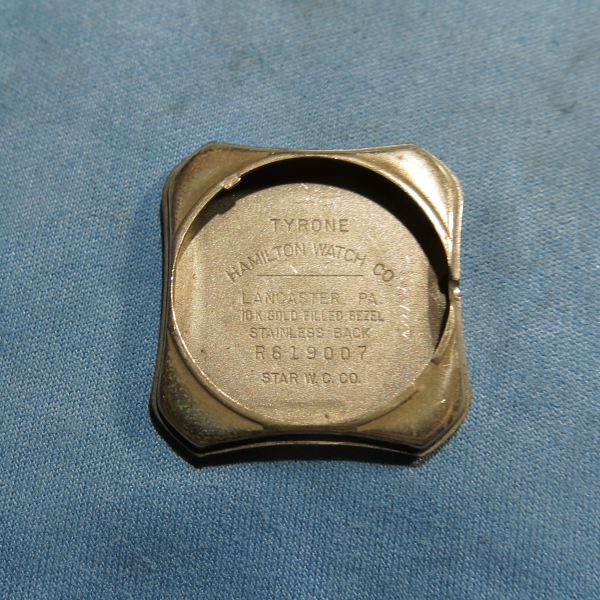 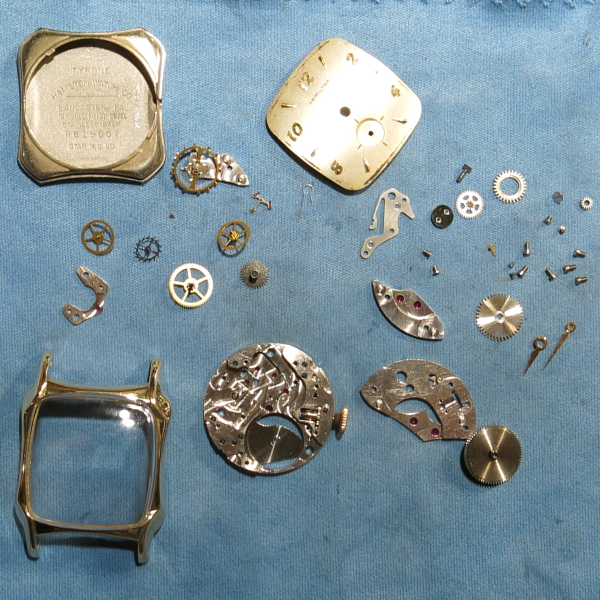 The movement is now running briskly and looks good to my eye but only the ear of the timer can say for sure. 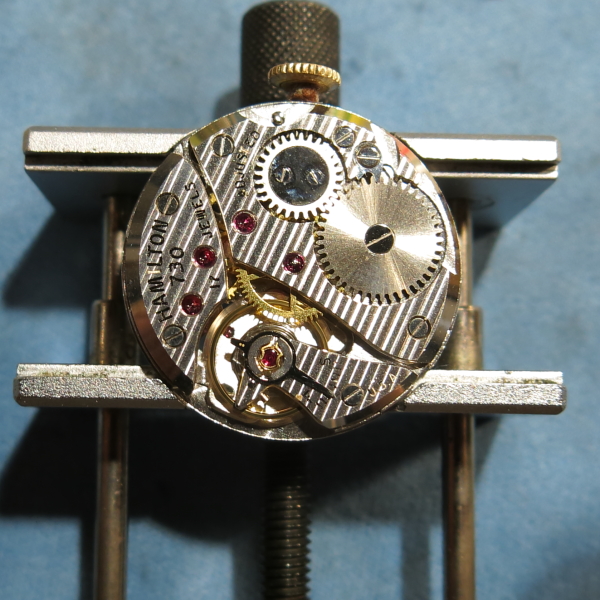 Well, the watch is running a little fast but that's easily corrected with the regulator.  Of greater concern is the beat error of 7.0ms  - that is a bit too high.  The closer to zero the better, but on watches like this I prefer to see the beat error below 3.0.  It's not as easy to adjust as on later-made Swiss watches so I usually will accept "good enough" over multiple attempts to achieve "great".  7.0 is too high to let slide though so I will show you how to adjust it. 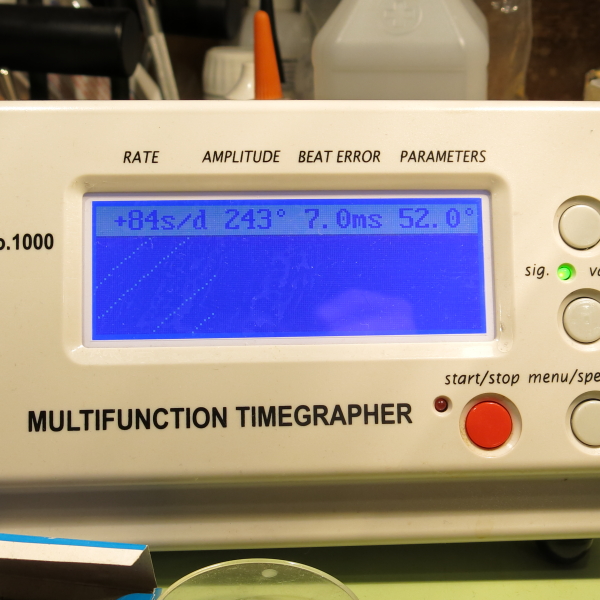 That's a lot of words so let me show you it in a picture or two.

In this shot you can see the red ruby impulse jewel on the balance.  Notice how it pretty much aligns with the regulator arm sticking out at 12 o'clock.  If you notice the position of the regulator arm relative to the pallet fork arbor jewel two photos above, you'll see the pallet fork it a little off to the right of the arm.  So I need to move the impulse jewel counter clockwise so the impulse jewel is to the left of the arm - since I'm looking at the balance from the opposite side. 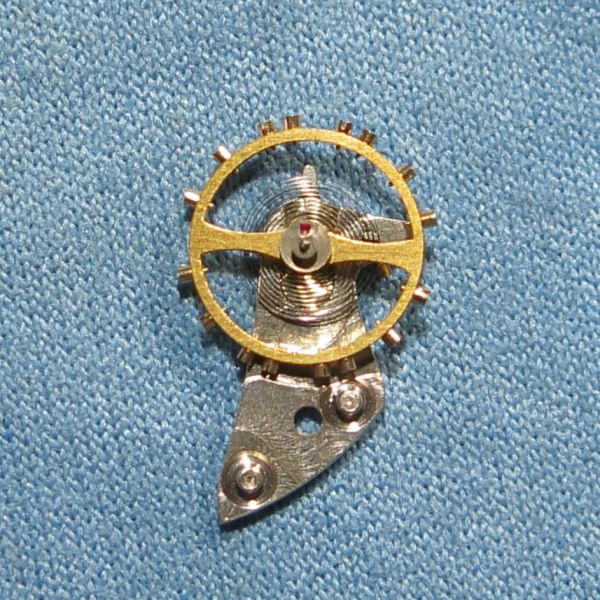 With the balance assembly removed from the balance cock, the silver hairspring stud is to the left of the balance wheel arm.  The other end of the hairspring in held in the gold-colored collet and if I stick the tip of an oiler in the slot of the collet, I can rotate the collet (and thus the hairspring stud) counter clockwise so that it's roughly over the arm.  That will move the stud location relative to the impulse pin. 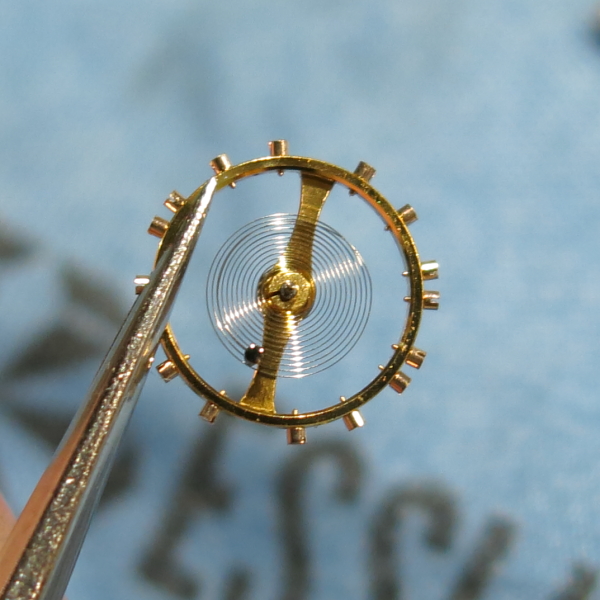 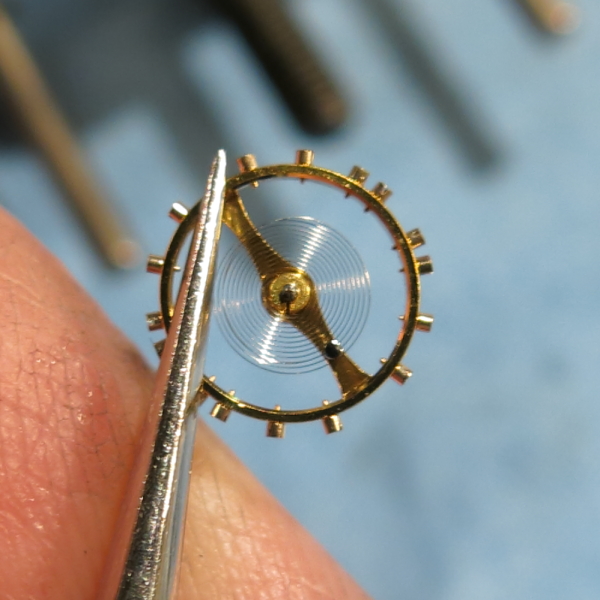 Well... a tweak of the regulator slowed the watch down and the although the new beat error of 2.4ms isn't zero, it's way better than 7.0.  I could give it another try but every attempt to adjust the beat error is like poking a sleeping bear.  Do it too much and you may regret it.  So I'm happy with the new performance. 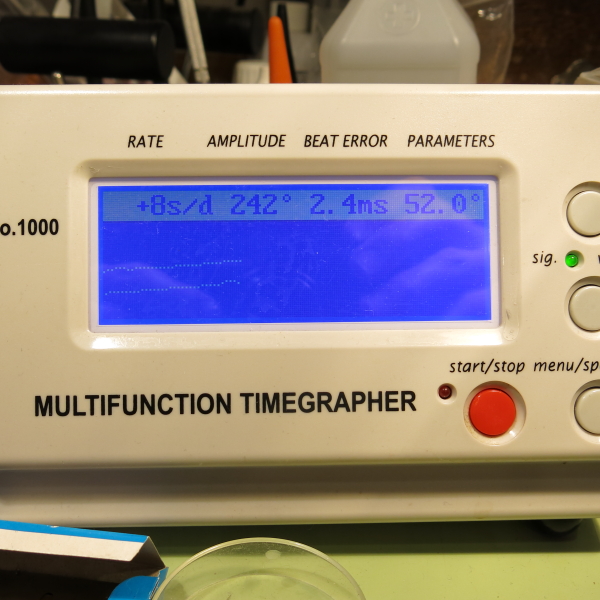 The now-running movement with it's dial and hands go back into the freshly polished case. I think this project turned out really well.  I like this watch on a strap much more than on a bracelet. 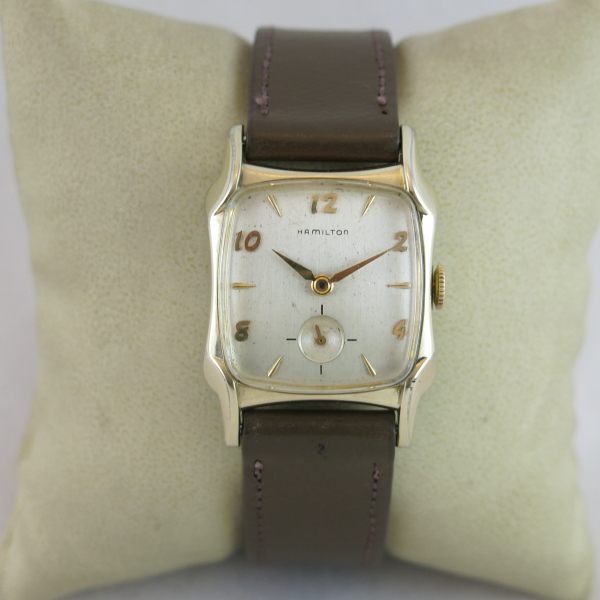